Set off down to Savannah. Just over two hours drive, in an Americans mindset hardly worth getting in the car for. We’ve been there before but it’s a lovely city and a convenient stopping-off place on our way back to Orlando.

Stop off at a moonshine factory and I am tempted into buying a jar of traditional moonshine.

Yeah, tea tonight consists of a Tacobell Spicy Supreme Burrito, at last. Pretty awesome, I’ve saved the recipe. Wendy has a Panera bread sandwich and soup. How bizarre can the Panera Bread menu get with a Grilled Mac and cheese sandwich – perverts.

Quercus virginiana, also known as the southern live oak, is an evergreen oak tree endemic to the Southeastern United States.

Although live oaks retain their leaves nearly year-round, they are not true evergreens. Live oaks drop their leaves immediately before new leaves emerge in the spring. Occasionally, senescing leaves may turn yellow or contain brown spots in the winter, leading to the mistaken belief that the tree has oak wilt, whose symptoms typically occur in the summer.[7] A live oak’s defoliation may occur sooner in marginal climates or in dry or cold winters.[8]

Pretty good breakfast. I finally succumb to biscuits and gravy. Looks pretty gruesome but is quite tasty. I think the gravy has mushrooms in it.

We’ve been here back in 2015 (what an awesome road trip that was) and our memory is of a lovely relaxing city that can be enjoyed on foot. Catch the hop on off trolley tour to get a good overview and some history. Have a coffee at the slowest coffee shop in the World. Then hop off at Forrest Gumps form – they’ve moved it a museum not even a plaque or an imitation to replace it. Have a walk around the market district and then back to the car. Take photos but as it’s mostly cloudy we’ve rescued our photos from 2015 and imported a few. After lunch the sun brightens the place up.

Finally head off to explore Tybee Island. I wonder if the Einstein who run tourism there ever question why the place is deserted in December. I’m sure weather is one factor and out of season another but $7 to park for 2 hours anywhere is ridiculous. We would have had a stroll around and at least a coffee but at that extortionate price they can go hug a parking meter.

Tea tonight is a lemon ricotta mixed berry crepes from IHOP, tempted to have the French toast, and some Jalepeno Humous. It’s an alcohol free night. 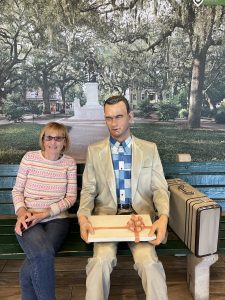 Warm and sunny. Back into shorts and tee shirt as we drive down to Orlando. 4 hours past so many familiar places. 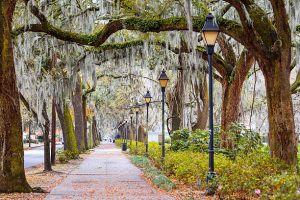 Fairly easy drive back into Florida and then the traffic light Center off the universe, Orlando.

Hotel is a home 2 suite, great recommendation Phil, our 2nd one. Very comfortable,5 star, so far. Sadly the girl on reception has all the personality of a grizzly with tooth ache, not a smile but at least she didn’t snarl.

Wendy’s orgasmic as there’s an Aldi next door and I’m so excited as there’s a cheesecake factory in walking distance and there’s even pavements to walk on.

Walk to Cheesecake Factory. 17:00 and there’s already a 15 minute wait, just hate this ludicrous aspect of American life. Why do people wait so readily.

Well it looks like another dessert tea for me as my entre consist of a Key Lime Cheesecake and take home a Cinnabon Cheesecake for tomorrows dessert. Wendy has strict instructions not to touch it, unlike the Toblerone Cheesecake she stole from me. 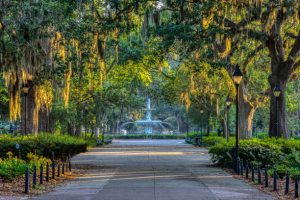 Spanish moss (Tillandsia usneoides) is an epiphytic flowering plant that often grows upon large trees in tropical and subtropical climates. It is native to much of Mexico, Bermuda, the Bahamas, Central America, South America, the Southern United States, and West Indies.

Most known in the United States, it commonly is found on the southern live oak (Quercus virginiana) and bald cypress (Taxodium distichum) in the lowlands, swamps, and marshes of the mid-Atlantic and southeastern states, from the coast of southeastern Virginia to Florida and west to southern Arkansas and Texas. 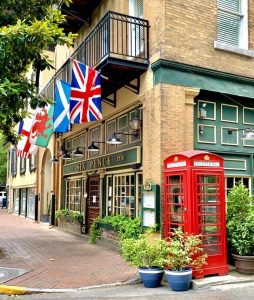 We’ve decided to have a relaxing day before the ordeal of two airports, Orlando and Manchester. So a lazy day, starts with a very lazy morning and then after lunch we take the car to be cleaned and Wendy saunters around Walmart, dithering with her choice of sweets etc for the kids Advent calendar – more weight to traipse home. What an exciting life we lead.

Lazy start to the day as we hang around for airport drop off of the car. Our flights been moved back 2 hours, bloody typical. Drop car off, it’s been so comfortable and easy to drive, Trip was about 4,500 miles. Then we have 4:45 minutes to hang around in the MCO lounge. Well at least TSA manages to pass 46 minutes away for us, how kind.

One of the more sociable receptionists has a great personality and even very kindly pays for Wendy’s washing powder because it cannot be put on our room bill. Then, when Wendy finds some money, she refuses to accept. How generous that a guy in the line for lounge access allows Wendy in as his free guest and saves her having to pay. Just two examples of the friendliness and generosity that makes America so great.

Highlight of the trip has to be a proper traditional Thanksgiving with Kim, Phil and their family. It was awesome. They all made us feel so welcome and at home we never wanted to leave.

We didn’t have to say what we were thankful for but I think we have to be greedy and say there are at least two things we’re thankful for, so here goes:

1 Thankful for great friends Kim and Phil they made us so at home. We never understand how we’ve been so lucky to have them as friends.

2 Thankful for being able to spend so much time in the USA and for all our friends there. Americans are just so friendly.

Visited Florida, Alabama, Mississippi, Arkansas, Oklahoma, Kansas, Nebraska, Missouri, Illinois, Kentucky, Tennessee, West Virginia, Virginia, North Carolina, South Carolina and Georgia on this trip. That’s 16 states in all, Oklahoma and Nebraska being two states we’d never been to before and to be fair we’d hardly seen anything of Kansas and Little Rock on our 2015 trip – http://blogs.4uand.me.uk/2015/09/20150902-georgia-and-the-deep-south/. That leaves us with 4 states left to visit (Wisconsin, Michigan, North and South Dakota – hard to justify the last two). Visited 4 more National Parks, all amazing, which leaves me with 26 left to visit.

My most memorable aspect of this trip is the nothingness of Oklahoma and the facts around “The Trail Of Tears”, the sheer brutality and cruelty to the Indian nations stands alongside slavery in the annals of America’s bad past. Dumping what was left of the Indian nations (The First Americans) onto desolate, nothingness, with the sop to their survival being a casino, fits in with my image of today’s Indian tribal lands.

On the downside, America seems to be infested with non-English speakers and generally crap service. Suspect this is mainly a by-product of the chronic labour shortage. For instance, the Cheesecake Factory had nearly 50% of their tables empty yet there was a 15-minute wait because they didn’t have the staff. Have to say our server was one of the best waiters we’ve encountered on this trip.

The American hotel industry is plagued with appalling management and apathy. Do hotel managers ever bother to read the reviews and do anything about the problems raised, I think not. I don’t think we’ve stayed in any hotel that didn’t have problems that competent management couldn’t have fixed. Problems range from the reception staff who shouldn’t be allowed within 5,000 feet of a customer; heating that doesn’t work; dilapidated fixtures and fittings; crap Wi-Fi; Breakfast not even fit to be served to a hungry rabid raccoon; Staff who fail to turn up; noisy rooms. And of course, they’ve all hopped on the Covid wagon, no daily room service “because of Covid”. They’d be better off being more honest and saying because “we can save money”.

Meanwhile looking at the depressing news back home do we really want to be going home. The countries up shit creek without a pound to pay the debt incurred with Covid etc., and these cretins want to inflict more misery on the rest of us. When will our government grow some gonads, pay the nurses their 17%, they deserve it after Covid and who’d do that job, then tell the rest of the greedy cretins to go forth and multiply, the countries in a mess and needs help. I think the whole country will be on strike, including Borderforce which on the surface sounds good as hopefully, it’ll stop the illegals, but of course, it will mean airport chaos over Christmas. No doubt they’ll make special arrangements for border force to help get the illegals into their 5-star accommodation as quickly and safely as possible and screw citizens using the airports. It’s simple if you don’t like your pay resign.

A couple of years from now the train drivers will be whining that their jobs are being replaced by computers that don’t go on strike and postal workers complaining that no one uses their snail mail services as private delivery companies do a better job. Well serves them right, remember the miners!

Well, that’s our American travels over with for the year. Now have 19 days at home before our next escape – Crete for New Year with Brett and Karine. 19 days how will I cope. Then we have a diabolical wait until the 1st of April until we can escape back to paradise – Park City, Utah. Hopefully, if our visa application is successful, it’ll be for 6 months in paradise and save us four flights, three TSA queues and six airports.