Lazy start to the day. Given the gaping chasm in my mouth where my wisdom tooth was it’s only soft foods, porridge, for me.

By way of another treat I get to go to the Market for the weekly shop. Fortunately won’t be going there again as Wendy says they’re too expensive. But they do have some great coffee.

I was supposed to be leading an easy bike ride but the raging tornado put everyone off. Thankfully, what with the winds and my missing wisdom tooth, no one turned up.

Wow, these Cocodamol that Wendy has certainly do the trick.

Tried to purchase an aeropress but couldn’t find one anywhere, so ended up ordering off Amazon.

In the evening we went over to Joe and Donna’s for drinks and to see their new house. Then off to Black Rock restaurant for dinner. I’m still on soft foods so opt for French onion soup and cheesecake. One of the few benefits of a wisdom tooth fiasco. But the real good news is that recommendations on alcohol after loosing your wisdom tooth seems very varied. Ended up identifying one respected article that was 24 hours. The worst, recommendation, rapidly ignored, was 7 days. 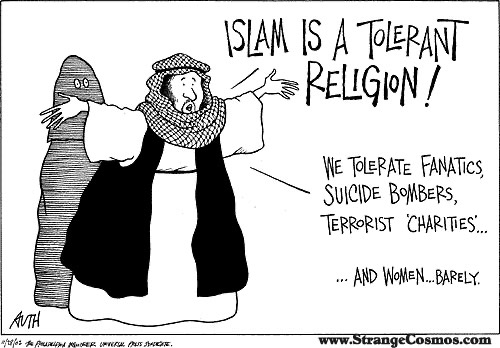 France and Germany have exported hundreds of millions of pounds’ worth of weapons to Russia, evading EU sanctions imposed after the annexation of Crimea in 2014.

Investigate Europe, a team of journalists working across the continent, reported that ten member states had sold €346 million worth of military equipment to Moscow, some of which could be used in Ukraine, since the annexation. Most came from France, Germany and Italy.

President Macron has advocated that discussions with the Kremlin be resumed, claiming that China would dictate the terms of an eventual ceasefire in Ukraine if Europe’s leaders did not reopen talks.

Australia, Britain, Canada and the United States have imposed outright bans on Russian oil purchases but the 27 members of the European Union have not been able to agree on the embargo.

The EU aims to reduce its dependence on Russian oil and gas by two-thirds by the end of the year and to zero by the end of 2027, EU Economic Commissioner Paolo Gentiloni has said. Well bully for them. 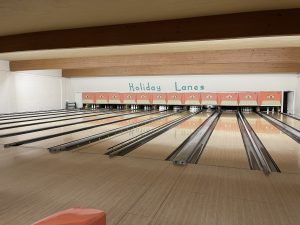 Another lazy day on porridge, ice cream and other sweet stuff. Fortunately the pain has worn off.

Rain and snow all day. 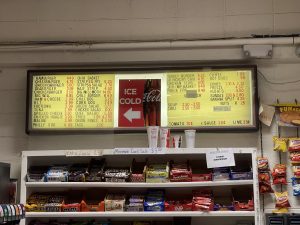 Joe and I set off to explore the bowling alley at Heber. Such a pity the one at Kimball junction has closed. The Heber alley is really a classic, quaint, and dates back to the 1960’s. Only $5 a game and $2 for shoes. Plenty of cheap great American junk food as well and seems very popular with the locals.

Go and pick up some more 9mm ammunition from Sportmens warehouse.

Evening I crack open a bottle of Zinfandel. Back on the mend. 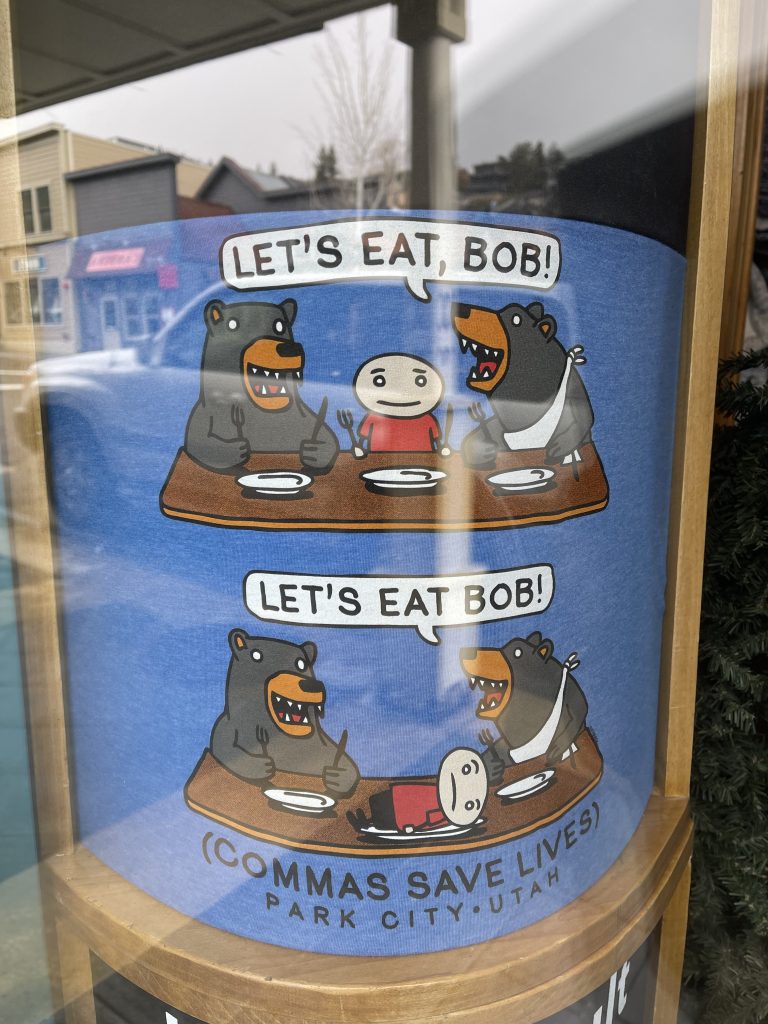 The power of the comma.

Makes me sick. Shoot these snowflakes.

The adventures of Biff, Chip and Kipper, and their dog Floppy, have helped millions of children to learn to read. Yet one of the books has been pulped by Oxford University Press after accusations of racism and Islamophobia.

The Oxford Reading Tree series, now a CBeebies TV show, includes dozens of stories used by most schools to teach children from reception upwards to develop their reading. One book, The Blue Eye, shows two children using magic marbles that transport them to a foreign land which looks Middle Eastern. It was deemed offensive after the setting, a marketplace, was described as “scary” and apparently Muslim characters were described as “unfriendly”. 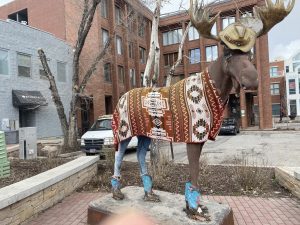 Another lazy, porridge filled, start to the day. The wisdom chasm is feeling much better but still on soft foods. Great opportunity for desserts and ice cream.

A snowy day, interspersed with sunny periods, but cold.

Wendy wants to go to the Levi shop at the outlet centre but as usual buys nothing. Then it’s a stroll up to Whole Pay Packet for some fish and a chocolate mouse. Sadly get neither. 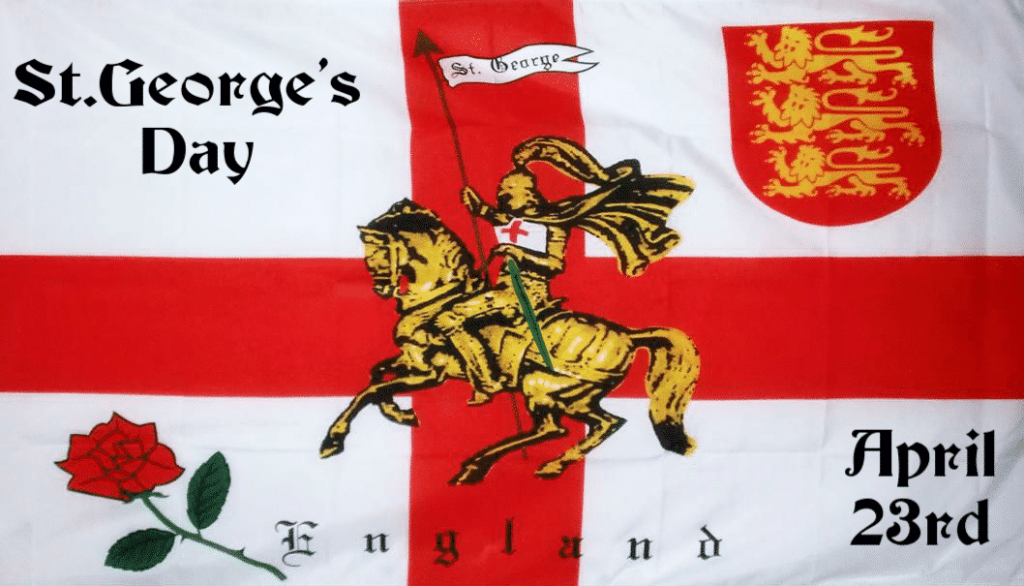 Here’s a quiz to improve your knowledge of our patron saint – https://quiz-questions.uk/st-georges-day-quiz/ 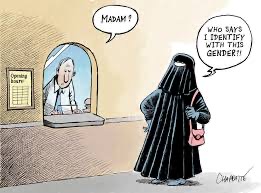 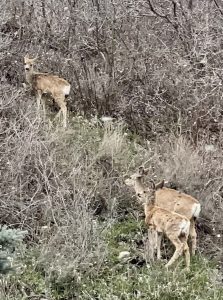 My new coffee machine, an Aeropress, arrived yesterday so get to try it out. Makes an awesome Espresso with no bitterness, just sweet. Fill it to level 4 and you get a pleasant Americano.

Catch the free bus to the transit centre for a stroll up and down Main Street. Oh the excitement, how can I contain myself. Then take a walk home in the snow.

Afternoon tea and some CRISPR reading and youtubes to try and get my head around this amazing, yet potentially frightening, genetic engineering solution.

Something magical about a walk in the snow with the right gear on. Spot a herd of deer in the neighbourhood. Awesome. 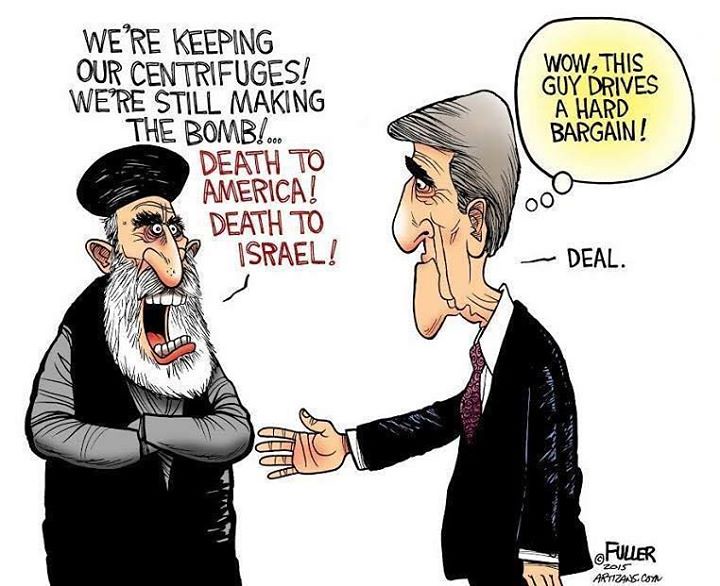 What is it with Americans? You give them a language and then they go screw with it.

Restroom is a euphemism for a public toilet, in a publicly accessible location, or less frequently a toilet room, in a private residence. Different dialects use “bathroom” and “restroom” (American English), “bathroom” (usually includes a bathtub or shower) and “washroom” (just toilet and sink) (Canadian English), “comfort room” or “CR” (Filipino English) and “WC” (an initialism for “water closet”), “lavatory” and its abbreviation “lavvy” (British English).

The term restroom derived from the fact that in early 1900s through to the middle of the century up-scale restaurants, theatres and performing facilities would often have comfortable chairs or sofas located within or in a room directly adjacent to the actual toilet and sink facilities, something which can be seen in some movies of the time period. An example of this is the description of a “movie palace” which was opening in 1921 which was described as including ” … a rest-room for the fair sex and a lounging room for the sterner sex … off these rooms are the toilets.”[1]

Euphemisms for the toilet that bear no direct reference to the activities of urination and defecation are ubiquitous in modern Western languages, reflecting a general attitude of unspeakability about such bodily function. As the euphemism, in the United States “restroom” has come to be associated with the actual function of the toilet, and further euphemisms such as “powder room” and “lounge” have been constructed to avoid using the word “restroom”.

In Canada and the US it is impolite to use the word toilet. Tough shit.

Lazy morning then Wendy’s off to the CC.

I take a pleasant, all uphill ride, to the library. Manage to get The Lincoln Highway by Towles as recommended by Joe. Saves me a tenner on Kindle. It’s an awesome library with not just PC’s but also Mac’s for those who have fore saken the evil empire.

Back home for afternoon tea and then take a walk up to the CC to meet Wendy. She has Apple pie and Choc croissants from the CC. Pick up a Key Lime Pie. It’s a dessert tea, kind to the crater left by my wisdom tooth. Well at least that my excuse. For those of you who have a sweet tooth, like me, why not try a dessert tea once a week. What is it? Well it’s a pig out on only desserts, the ultimate in junk food. 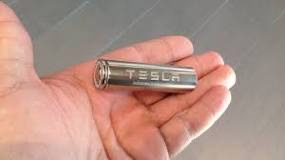 The Tesla Roadster battery pack is composed of about 6800 of AA sized cells, with a mass of about 450kg. 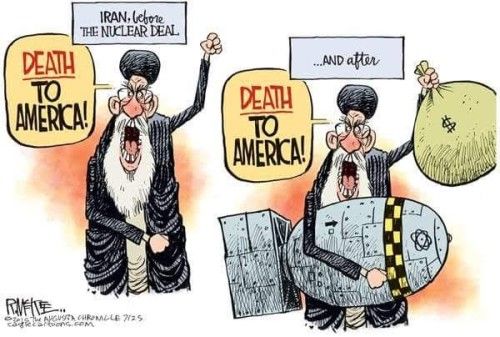 Then it’s a Starbucks for a hot chocolate for wendy and dirty chai for me.

Get home and Wendy’s not feeling too good, headache, feverish and lethargic. Takes a Lateral Flow Test just to be sure it’s not that dreaded lurgy – Covid. Thankfully it’s negative, but we have to cancel the PCMSC Volunteers Appreciation Dinner. Instead a quiet night in – now there’s a change. 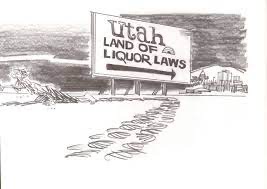 Look what happens when you mix religion, specifically Mormon, with politics you get crazy laws that just defy common sense:

You can’t advertise a Happy Hour instead they get round it with Appy Hour. 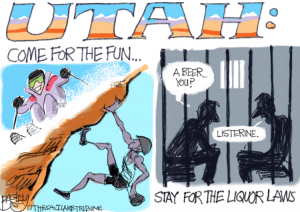 Yes, even a balding 72 year old, who clearly looks it, has to produce ID. And in our case that has to be our passport. Anyone purchasing beer, wine or liquor will have to present a valid I.D. at any store across Utah.
Four documents that serve as a valid I.D. under state law include:
* A state-issued identification card
* A valid state-issued drivers license – not even a UK driving license.
* A military identification card
* A valid passport
Those documents must include a photograph and date of birth. 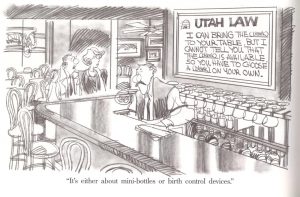 In restaurants you are not allowed to carry your own drink from the bar to wherever you are sitting.

Just 3 of the idiotic laws you get when you mix religion and politics. There are more where these came from. 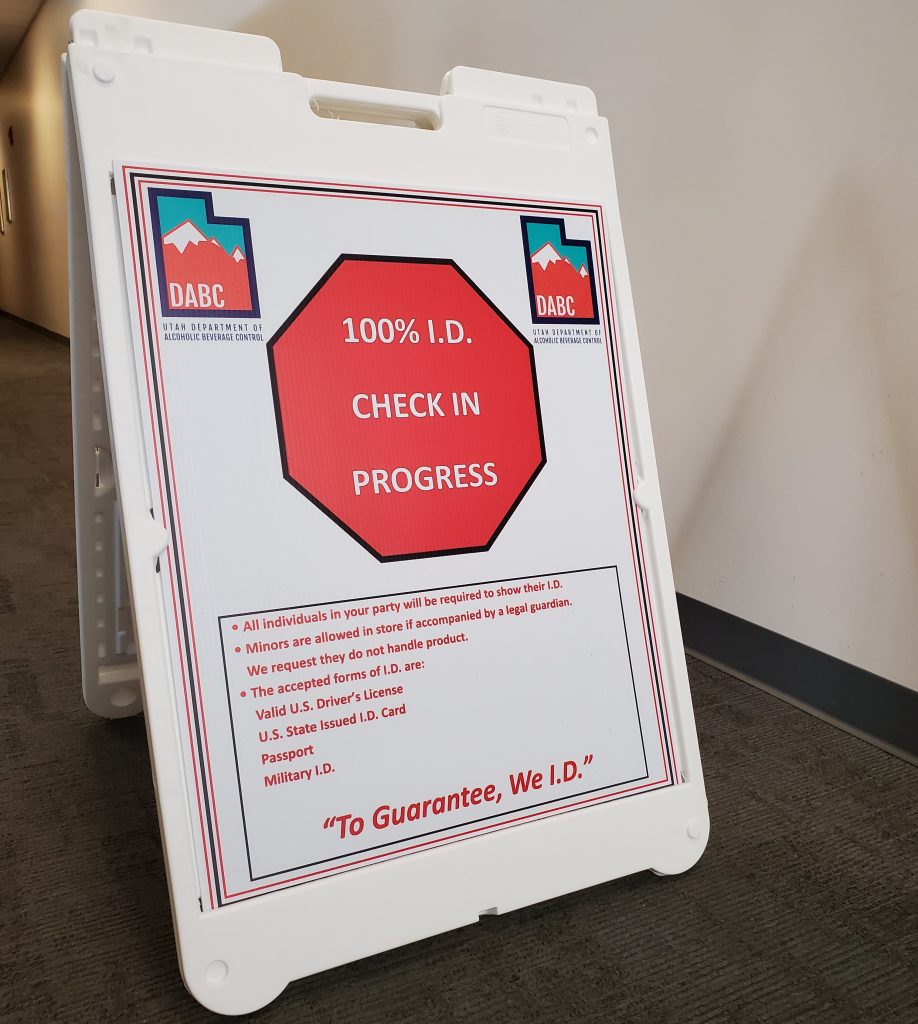 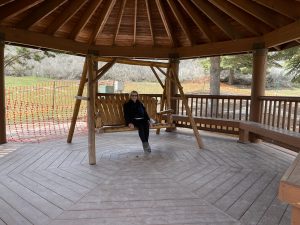 A rest in the graveyard.

Up early for 10:00 pickleball. Yes, pickleball’s been resurrected. Bloody hell is it exhausting? I’d forgot how exhausting it can be up here. Especially when you’re a Brit from sea level trying to play at 7,000 feet. Manage to get 5 games in with not much rest in between. Surprising how many men now play. Also surprised how much younger they all seem. I must be the oldest there. But what a fun game it is as long as no one takes it too serious. Enjoy and smile.

After lunch Wendy and I have a 3.5 mile walk to the liquor store and back. Yeah, they have Basil Haydn Dark Rye in. That’s a rare treat and I’ve remembered our passports because i sure look under 21.

Back home for afternoon tea and then off to the Kamas Lions Gun range for some target practice with Joe. What a life this is.