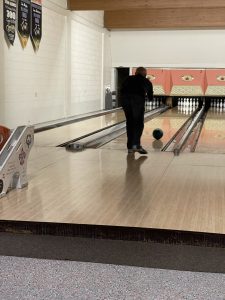 Wendy and I go bowling with Mike at Heber. The bowling alley’s really quaint, dates back to 1962 and not changed much. Food, mainly American junk food, so much better than all that healthy shit and cheap. No wonder it’s so popular with the locals. At $5 a game they’re not greedy. 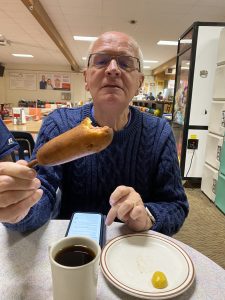 After lunch it’s my weekly treat with a trip to Smiths. Oh how I look forward to this quality time spent with Wendy.

New regime is we treat ourselves and go out to dinner once a week. Tonight we go to the Boneyard. I have the hot Italian, delicious. Not sure what healthy stuff Wendy had.

Can you believe these crazy names for beers. It seems like there’s a major competition out here to dream up the most outlandish name. 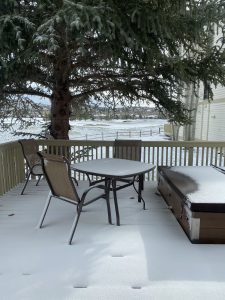 After lunch Wendy trots off to the CC.

I take a stroll to the bank and then go and meet Wendy. Just love how we can walk or cycle everywhere. Snow showers don’t materialise.

Have a walk up to the supermarket with Wendy.

Then after lunch it’s a short bike ride down the rail trail and back.

In the evening Mike comes round for dinner and we have a great evening with him. 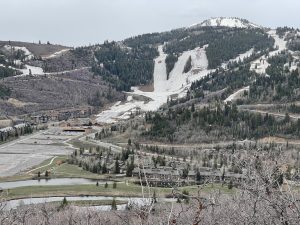 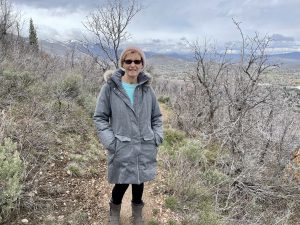 We’re off to do one of my favourite walks around Masonic hill. Great 360 degree views. It’s a 3.5 mile walk, 2 miles undulating but mainly uphill and followed by 1.5 downhill. I get plenty of earache from Wendy about the uphill section and then it’s a constant stream of “it’s a long path”, “are we there yet”. Anyway she makes it. Well done. At least it stayed dry with the odd glimmer of sunshine.

No time left to cook a chicken for tea so we try a Panda Express. Wendy loves them, but alas not anymore. 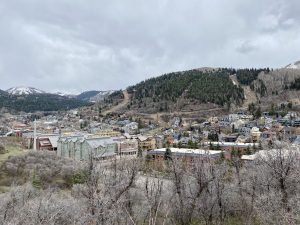 Off to pickleball. Manage about 5 games. I’m cream crackered after that, this 7,000 feet altitude takes it’s toll.

After lunch Wendy tootles off to the CC whilst I try out one of my bike ride over Park Meadows (exchausting uphill section), down into Round Valley and then back along the Rail Trail.

Awesome out in the sun exploring a leisurely bike ride. 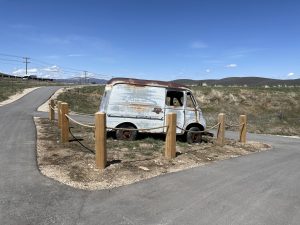 Despite the snow showers my Easy walk from Round Valley along the Rail Trail. Six hardy hikers make it, including Wendy. Whilst it was a tad cold at least it didn’t snow and was in the main sunny. 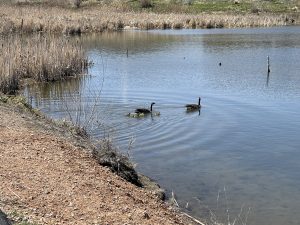 Why is there a dent in the bottom of a wine bottle:

The dent in the bottom of a wine bottle is called a punt. 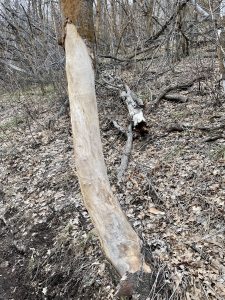 Look out, look out, there’s a bear about.

Since early wine bottles were crafted by glassblowers by hand, they needed to add the punt. This is what allowed the bottles to stand upright in the home or wine cellar. Nowadays, the punt is not really needed. The wine bottles of today are being crafted by machines, not people. It would actually be easier to manufacture bottles that do not have the punt on them.

One other theory is it gives the bottle added strength to withstand the pressure. I go with the former.

A common myth is that you can tell if a wine is top quality by the depth of the indentation on the bottom. According to wine experts this is false.

Biden: Muslims in the U.S. face ‘targeted violence and Islamophobia’

“Targeted violence and Islamophobia” in our society? Where, Joe? When?

Muslims murdered 1,086 people around the world in jihad attacks during this just-completed Ramadan. During that same time span, no Muslims in the United States were killed for their faith. Yet Joe says nothing about jihad violence. It doesn’t fit the establishment narrative, which is the Muslims are always and in every case victims of non-Muslim “bigotry” and “Islamophobia.” 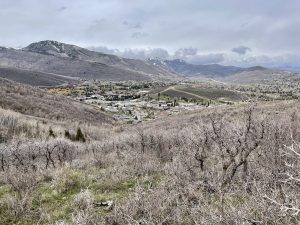 A snowy and cold day.

Up and out for 10 while 12 pickle ball. Wow, it’s still exhausting but fun.

Lazy afternoon for a change.

In the evening I finish off a lovely Zinfandel and yet more Netflix.