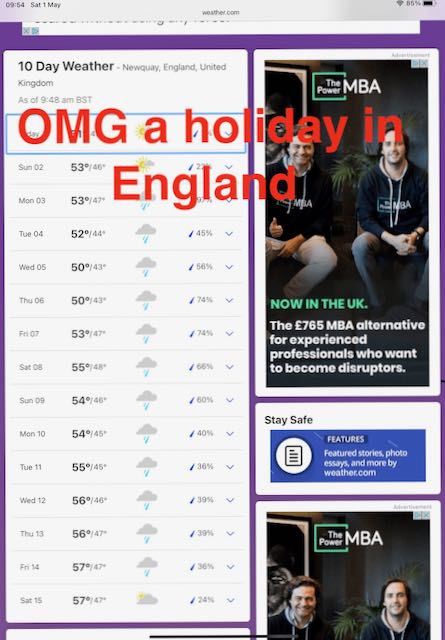 Could this be why we’ve never holidayed in England for the past 10 years?

The daily doses of crap, weak politicians, death of common sense, defective software, wokes, snowflakes and libtards could really grind you down. But from now on there has to be at least one good thing per day to celebrate. 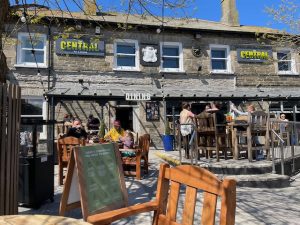 Today I’m thankful for an easy 347 mile, 5 and a qaurter hour, drive down to Newquay. No traffice jams, just a few slow road work sections – more about those later.

Also good to come back to old haunts after a 14-year absence. When I say old haunts this is where I “picked Wendy up” back in 1968. I wonder whether the pub will have a Blue Plaque celebrating that famous event?

Driving over Bodmin Moor bought back memories of 04:00 in the morning set off with Mum and Dad in a split-screen Morris Minor that struggled on even the slightest incline, complete with AA printed and detailed route instructions, went through the centre of so many towns. Horrendous tailbacks on the A30 and broken down steaming vehicles littering our route. No motorways or dual carriageways then. Today there’s a great dual carriageway. 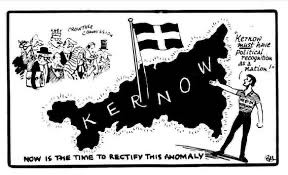 Yet another region that wants independence. Why I think Belthorn should go for it.

Set off at a leisurely 11:30. It’s bank holiday weekend and the traffic forecasts are dire. Boy we can sure pick our days to travel. At least with a late start we might avoid the inevitable early onslaught. Turns out to be a good decision.

After a great journey finally locate our VRBO home for the next two weeks. The rental earns its first black mark before we’ve even opened the door. The address / directions / location on Google maps are all a complete joke. Even when we’re in the car park, no sign of Number 3.

Before we unpack I check the essentials are working ok – wifi is good. Clean, modern and well equipped. The outside approach is a bit disappointing, but then you don’t live outside. Wifi is good and very stable. We’re only about 200 yards from Porth Beach and it’s lovely and sunny to greet us

How about this for a telephone answering message to deter the nuisance calls:

“How kind of you to ring. Please don’t hang up. Stay on the line. You are being connected directly to the Scotland Yard fraud squad. By the time you’ve listened this long, their technology will have traced this call to wherever in the world you are ringing from, so expect a knock at your door soon and know that your phoe line will be terminated automatically withing the next 24 hours. Have a nice day. If you are a genuine caller, then sorry about shouting at you. Just leave a message and I will ring you back. Thanks.”

Another one of the many things that really gets my gorge rise:

Nazanin Zaghari-Ratcliffe has been sentenced to a year in prison after being found guilty of propaganda activities against the regime in Iran. 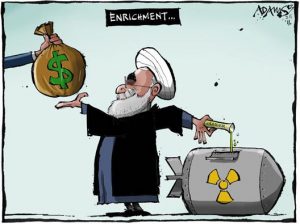 Who in their right mind would trust this barbaric terrorist state?

The British-Iranian charity worker was also given a one-year ban on leaving the country.
Her lawyer said she had been accused of taking part in a demonstration in London 12 years ago and giving an interview to the BBC Persian Service.

Can you believe we are even stupid enough to give them foreign aid – more on this later.

Why are we putting up with this nonsense from Iran – a rogue terrorist state that wants World domination of the religion of pieces and permanent offence – as prescribed by the quran. What are we doing about it? Sweet Fanny Adams. We should be doing absolutely everything within our power against them; impose outright sanctions; if there are any assets we’ve not already seized then seize them; cyber attacks on them. They say they want to kill us – believe them. We certainly shouldn’t be negotiating with them on the nuclear deal. They cannot be trusted. Even our ten-year-old brainless cocker spaniel could tell you that. The usual lazy start to the day. Time for coffee and to catch up on all the disturbing news. Apple News does a great job of bringing together news from all over, especially the Times and Wall Street Journal. Too much news really. Then it’s time to start my blog. The rants and writing is somehow very therapeutic.

We take a stroll along the coastal footpath into Newquay. Stop for a luscious beer outside the pub where we met. No sign of a historic blue plaque to mark the occasion. Big debate on what the pub was called in those days. Why they’ve even changed the name of the pub from “The Saddle Bar” to “The Central” and on top of that doubled its size. Take plenty of photos whilst the suns out, because this may be our only chance if the dire weather forecasts are to be believed.

Wendy buys a sandwich and she has lunch sat in a park overlooking Towan Beach. We sure know how to live. 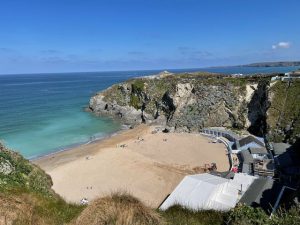 Try to find a decent bottle of brandy for Wendy. No chance. Call in Asda which seems to be housed in some back street shed. Still it lacks the scroats that infest Blackburn Asda.

Stroll back for afternoon tea.

Start watching Line of Duty, now that all episodes are available so we can binge-watch. Don’t know who is responsible for the sound and awful accents. Have the hearing aids on full blast and it still sounds like it was recorded in a washing machine on a slow soak. 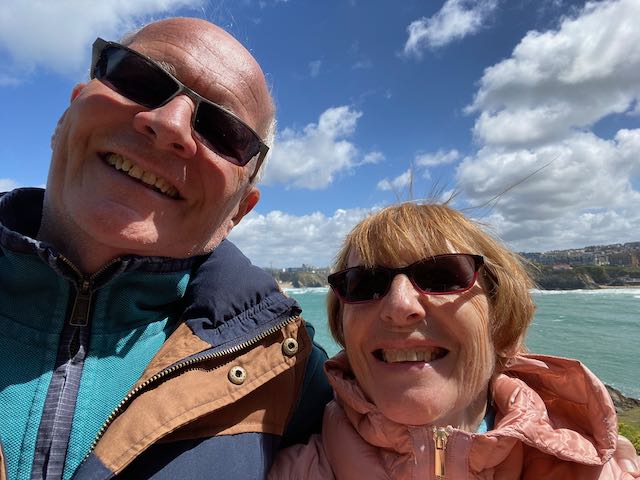 End to a great sunny day.

Today’s delight was a sunny lunchtime, drinking St Austel bitter sat outside the pub where wendy and I met some 52 years ago. Strolling through a very different Newquay bought back many holiday memories.

Saw this from the good old days, when British comedy could take the urine out of anything without some woke snowflake having an epileptic fit and summoning up a violent protest march 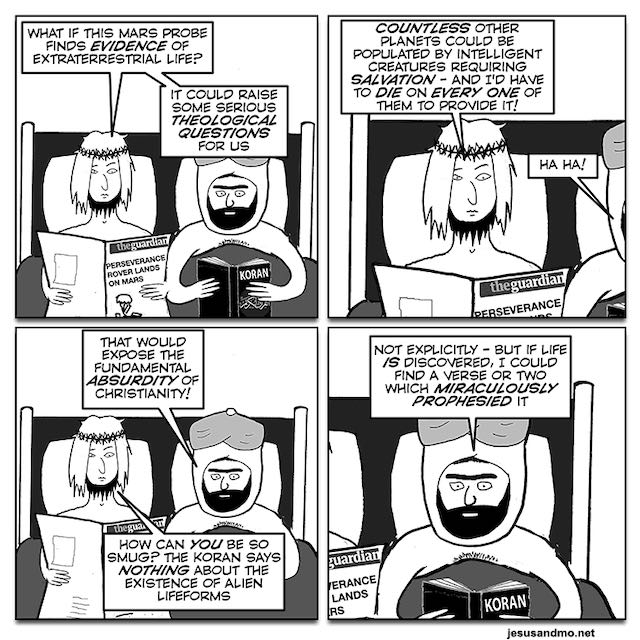 Well, it seems like Europe is even madder at us. What with our vaccine success, compared to their tardy failures, and our forecast growth this year of 6.8% compared to their achievement of a double-dip recession of 0.6% between January and March. What can you expect when you have a failed female German defense minister trying to run the show supported by a motley group of political failures especially sought out from around the EU.

Their latest bright idea is to sue AstraZeneca for failed vaccine deliveries. Nothing to do with their general incompetence, lack of investment and sloppy contract terms. Now that’s a really great way to promote pharmaceutical companies and encourage them to develop solutions in the EU. Come to the UK where you will be welcomed and supported.

Well if ever there was a reason to escape from Belthorn at every opportunity, this has to be it:

You have to be taking the urine. 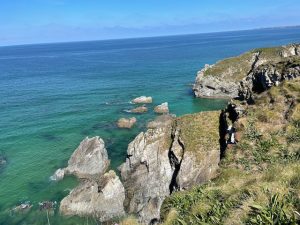 Then it’s off to Morrisons and with a stop up at Waitrose. Just the excitement we need for such a blustery stormy day. At least thers no rain until 15:00, but wind enough to blow me hubcaps off.

Oh, the joy of Morrison, it’s heaving, you’d think they were giving it away.

Waitrose is so much more pleasant and relaxed. Such a better class of person, they all wear masks. Mind you very pricey.

Trying to find a quality mellow brandy so Wendy can adulterate it with lemonade – perversion. I guess Cornwall is not into brandy, seems to be rarer than a Taliban wearing a pinny and washing the dishes for his wife. 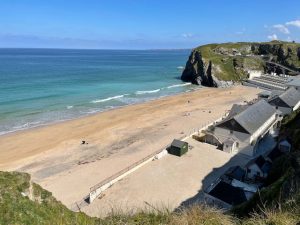 Find a few nice red wines, Carmenere, Primitivo and Pinot Noir. Glad to say none from the EU, always gives me a sense of delight when I avoid buying from the EU. Keep this up and their economy will be tanking big style – payback time.

After spending a fortune we head back for afternoon tea and watch the rain.

In the evening we binge out on “Line of Duty” again. Get through 4 episodes, couldn’t understand much of the dialogue. Leave the excitement of the last episode until tomorrow. Whilst sat watching TV, supping some mediocre Pinot Noir, I’m poleaxed by the standard lamp falling over in a drunken state. This is the second time it’s tried to kill me.

How lucky we are to be able to do the weekly shop without having to worry about the cost.

Just love this amazing exploitation of the English language, so clever:

Medical experts in London today were asked if it is time to ease the COVID lockdowns.

Allergists were in favour of scratching it, but Dermatologists advised not to make any rash moves.
Gastroenterologists had a sort of a gut feeling about it, but Neurologists thought the government lacked the nerve.
Obstetricians felt certain everyone was labouring under a misconception, while Ophthalmologists considered the idea short-sighted.
Many Pathologists yelled, “Over my dead body!” while Paediatricians said, “Oh, grow up!”
Psychiatrists thought the whole idea was madness, while Radiologists could see right through it.
Surgeons decided to wash their hands of the whole thing and pharmacists claimed it would be a bitter pill to swallow.
Plastic Surgeons opined that this proposal would “put a whole new face on the matter.”
Podiatrists thought it was a step forward, but Urologists were pissed off by the whole idea.
Anaesthetists thought the whole idea was a gas, and Cardiologists didn’t have the heart to say no.
In the end, the Proctologists won out, leaving the entire decision up to the assholes in politics.😊

Yeah, I now have my Covid 19 Vaccination passport online. Impressive MyGP app that works with NHS database. Well done NHS, credit where it’s due. Well America, now will you let me in?

On top of that the country has now given 50 million vaccinations, 15 million people, including us, have now had both jabs. What an awesome effort. Amazing. 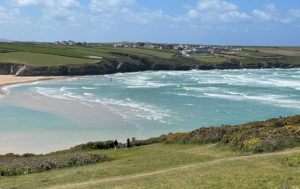 A lovely sunny but blustery day.

Another lazy start to the day, with a negative covid 19 lateral flow test for both of us. What a horrible experience these tests are, but we try and do our bit. Another impressive service from the NHS. 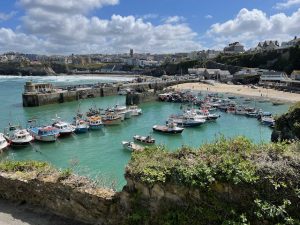 Finallie of “Line of Duty” tonight. Who is “H”. Exciting but oh so sad that we are excited.

Drive down to Towan Head for Wendy’s picnic lunch; stroll up to the headland; then a stroll into Newquay to buy some Cornish pasties for tea; followed by a pot of tea overlooking the harbour. Wow, spare no expense on this trip. 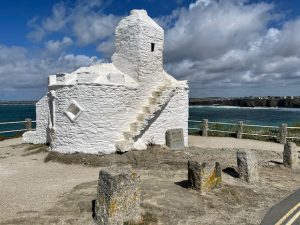 Come across the Huers Hut and a load of rug rats being told tales about the hut. God those teachers must have been brave to take that mob of rug rats out. Apparently, in the 14th century, the hut was occupied by a Huer who kept a lookout for shoals of Pilchards. When spotted he blew his horn and the fishermen all dashed out to catch the Pilchards. Pity they still don’t do it. You try buying fresh Pilchards or sardines these days. 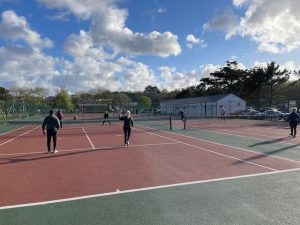 Cornish pastie with Daddys sauce for tea then drive down to Truro to play pickleball. Traffic chaos around Truro. Nice and sunny but the wind was enough to blow the knickers off a nun. Certainly made for some interesting games. Not as much fun though as our motley crew. It’s only a game! Mind you best not to play after a cornish pastie.

Back home to some Pinot Noir and the final episode of “Line of Duty”. Still confused. Have they found “H”? Well, that leaves it open for another season.

Now you’d think this was some sort of April fools’s joke but sadly for America it’s true. Have they nothing better to do?

The justices will consider a high school girl’s Snapchat post. But it won’t be the first time the court weighs whether the F-word is protected speech. 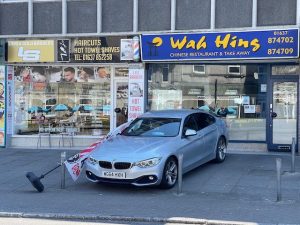 Back in the day (1968) this is where Tom and I went for a psychological meal as we stood outside and drooled over the menu.