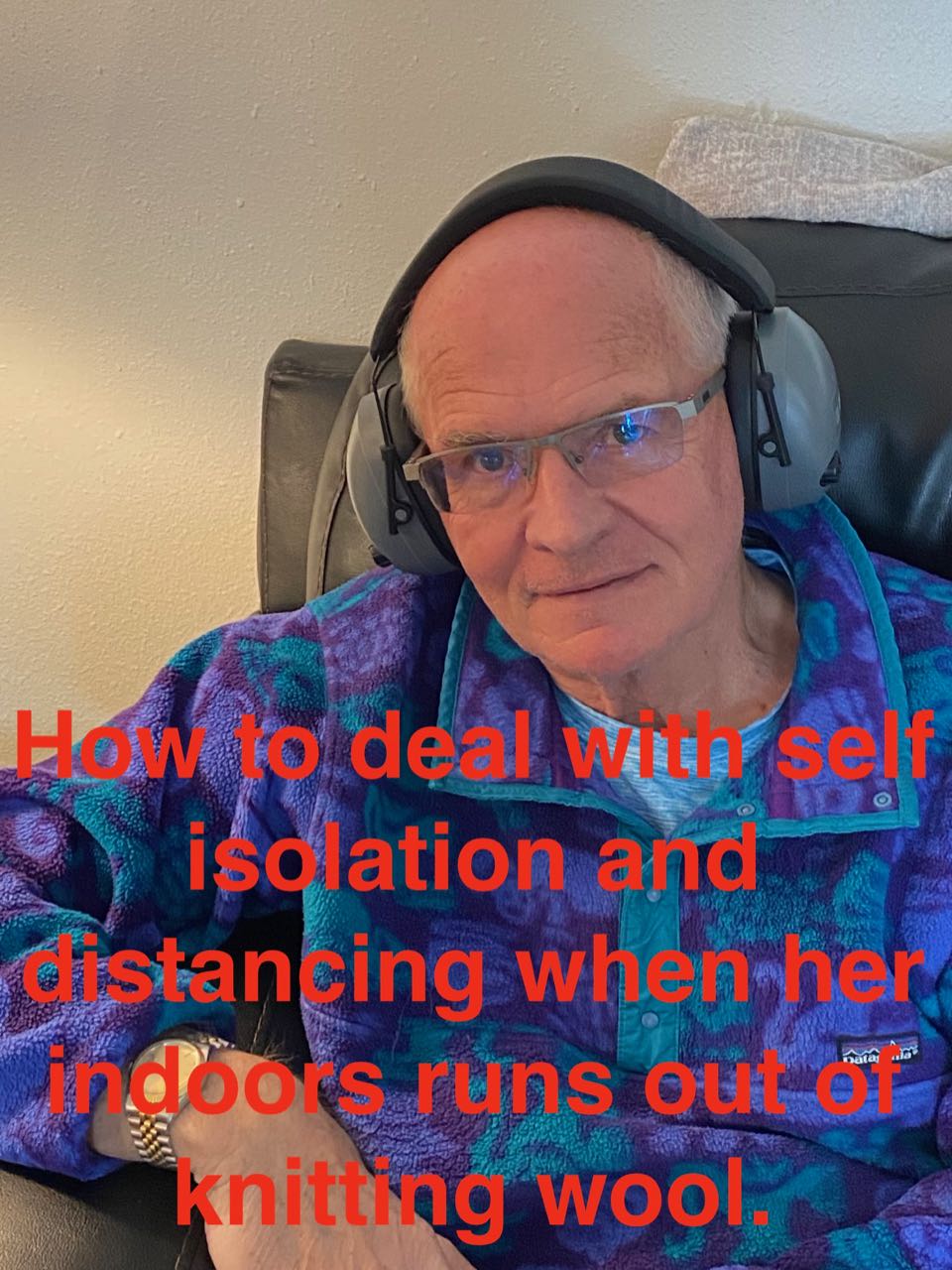 All the days are lazy days now with this self isolating and distancing.

Walk with B&M around Willow Creek in the snowstorm.

Then it’s the supermarket and Michaels for Wendy’s knitting wool.

Do a bit of programming for the sports club and sort out my password encryption problems. Helps with the mental stimulation.

In the evening more “Tyrant” and a new series on Netflix “The English Game”. It quite good and should appeal to Downton Abbey fans. All made more tolerable by a tasty bottle of Carmenera.

Still managing to keep up with my laws of retirement (no drinking, TV or napping before 17:00) although they are hard to adhere to in these trying times, but one has to have standards.

Well all this PPP is making us more aware of the simpler things in life, like going for a walk, family and friends. 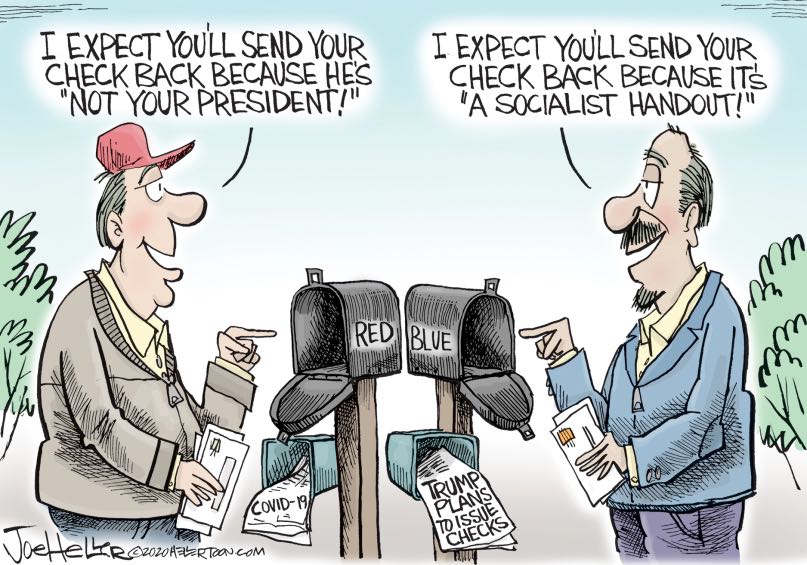 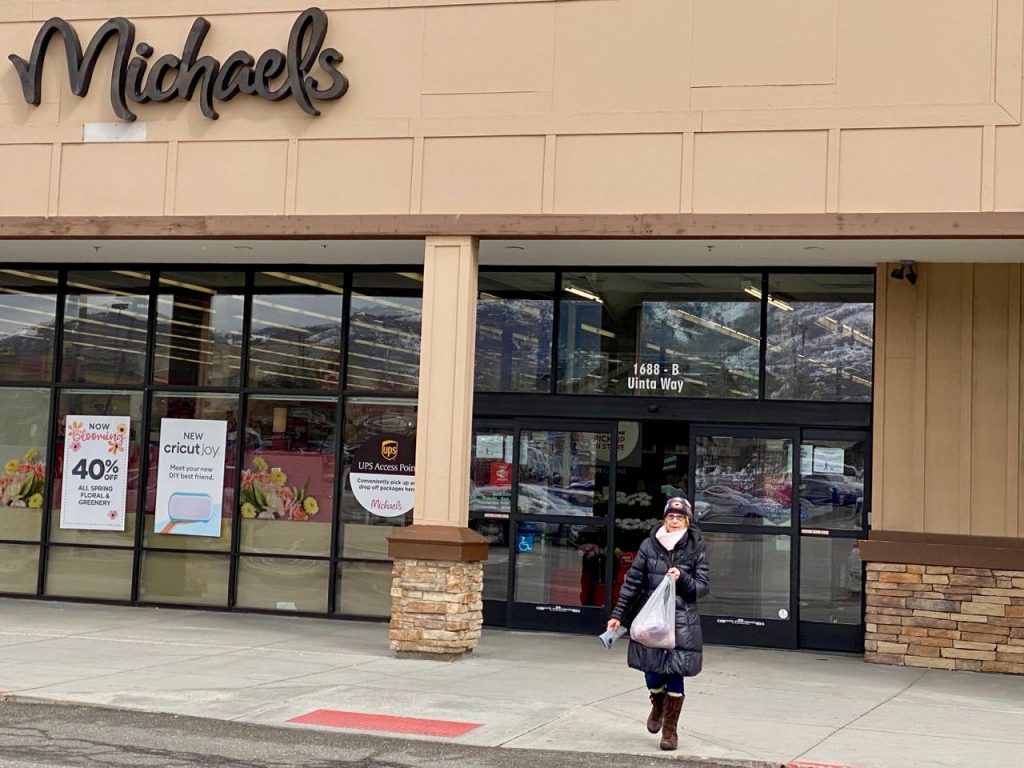 Hello is that the same person coming out of Michaels with Knitting wool who lambasted me for going into the liquor store. Unnecessary she said but knitting wool is one of lifespan’s essentials.

Head off to do the Masonic Hill hike with Helen and George. Meet them there to help with the PPP. Get about 100 yards into it and decide that this needs snowshoes. Abandon plan A and head off up to Round Valley for a 3 mile stroll. First time H&G have ever been there.

Then back home for a family quiz on Kahoots. What a great idea it is. I expect we’ll be seeing a lot more of this remote interaction over the coming months and years. Probably one of the good things to come out of this PPP.

Keeping up with the yoga every other day. Not resorted to improving my French yet. Who knows I may even start to find time for some reading.

Another no alcohol TV evening, but at least I’ve managed to fix the aspect ratio on the TV so people are no longer so tall and lanky.

What a great gesture and idea. 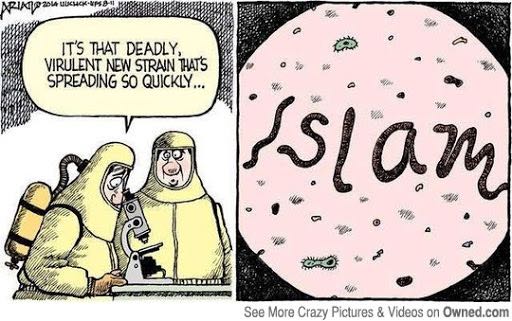 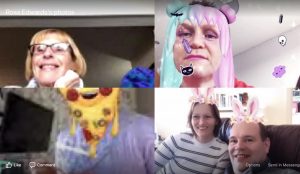 Mothers day in England so Wendy gets some lovely posting on Facebook and a great video call with all the kids and grandkids. Sadly Jasper and Beatrix are banished to their bedrooms for being too nosiy and disruptive – good luck with them Fiona over the next 5 months.

Virgin have sent us a schedule change to our flight on the 16th, at least it confirms the flights are still on, but it looks like we’ll have to get up earlier. The least of our first world problems. Now Wendy’s panicking about flying. And the good news is that once we get home we have to self isolate for 14 days, there’s hardly any food in the house and the supermarkets have been stripped by a plague of greedy locust-like scroats. 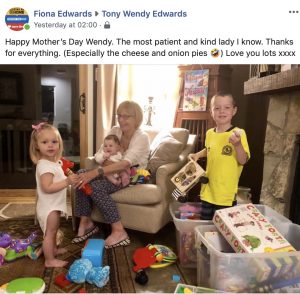 After lunch we drive down to Kimble for some petrol and then take a walk to Whole foods to try and buy some sultanas – no such luck, no-one seems to know what they are. Then walk up and around the back of Tangier Outlets, a pleasant 3 mile walk in lovely sunshine. 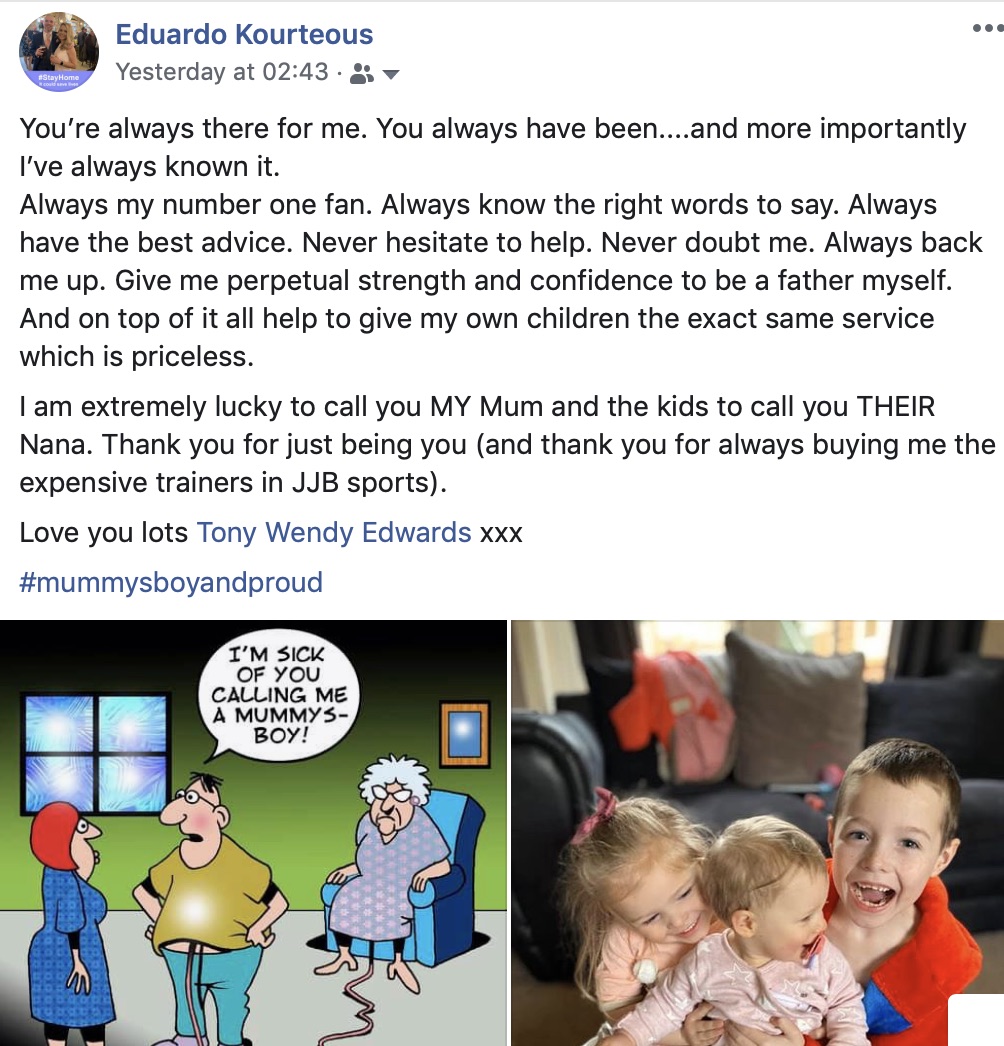 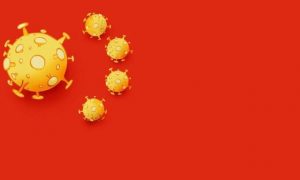 China getting a tad upset about adding the “Chinese” Virus to their flag. Serves them right.

Interesting talking to our kids today and their attitudes toward Trump. I assume their perceptions are coming from the English press, always a good unbiased and non-sensational source. They seem to think he shouldn’t call it the Chinese virus. Yet the evidence seems to point to the source being bats sold for food in large animal markets in China and this isn’t the first time, two other epidemics have come from these markets. What have they done about it, Nothing? Yet another one of the many benefits from China. Remember China is a dire totalitarian regime; they conspire to steal our intellectual copyright; Huwaei by all sensible accounts represent a security threat; they dump produce on our markets; they conspire to damage our economies; and don’t forget they suppressed information on this outbreak for months.

“The SARS-CoV-2 virus is a betacoronavirus, like MERS-CoV and SARS-CoV. All three of these viruses have their origins in bats. The sequences from U.S. patients are similar to the one that China initially posted, suggesting a likely single, recent emergence of this virus from an animal reservoir.

Early on, many of the patients at the epicenter of the outbreak in Wuhan, Hubei Province, China had some link to a large seafood and live animal market, suggesting animal-to-person spread.”

We really should be treating China as a pariah state and greatly reducing our reliance upon them. They are dangerous. But of course, because Trump says it then it’s rubbish. Yes, I accept he comes out with some tripe and his gob can run away with him. But then he’s not a politician, has never claimed to be, so why should we be surprised when he doesn’t behave like one. Isn’t it a good thing, politicians cause enough problems. Wake up he’s right on China; he is spot on about Iran, who would ever trust that bunch of lying ragheads who only want islamic domination of the world; he’s right on wanting to make America great again, only the snowflakes, liberals and left-wing would ever have a problem with any leader wanting what’s best for his country. 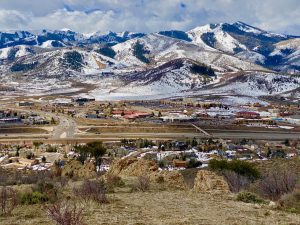 View from the top of Glenwild Loop trail.

Off to do a lonesome 3 mile hike around Glenwild Loop, at least there’s no snow but the first half of the walk is all uphill, a good workout. Hardly anybody on the walk so no problem with social distancing. Overtake George and Jack about 2/3rd of the way around. A good workout but don’t manage the hallowed 640 calories needed for a bottleof red wine. Before all this pickleball and a daly walk was burning off nearlya 1,000 calories. 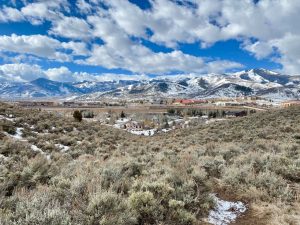 In the afternoon go a short walk up to the barn and back with Wendy.

B&M come round for dinner. Wendy does the new recipe lasagna and it’s a great way to do it.

Good company, good food, good wine and some brandy, probably a bit too much. 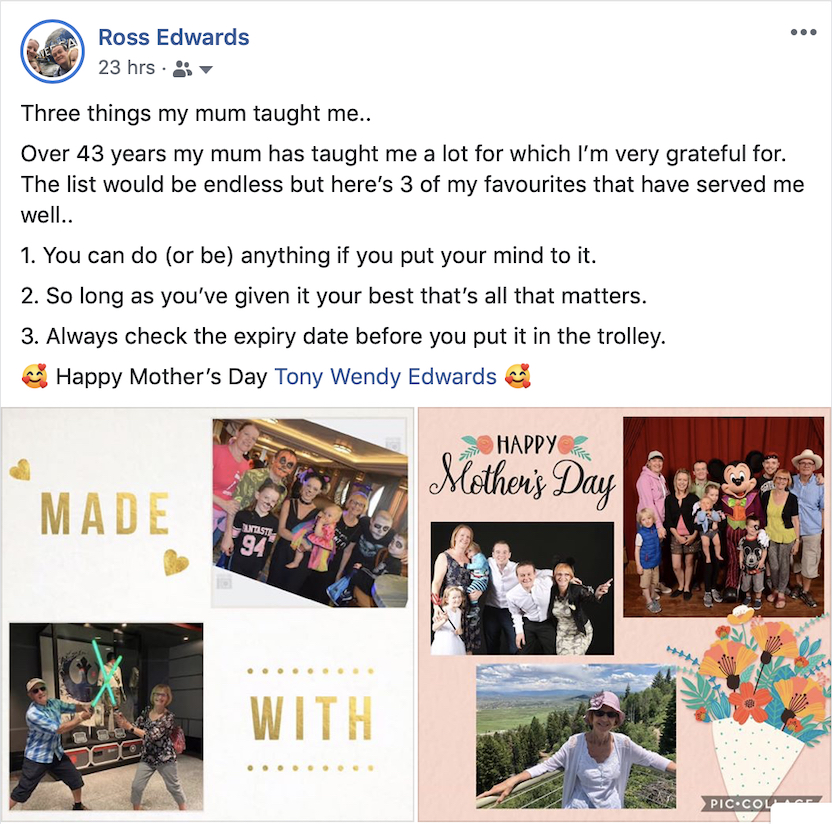 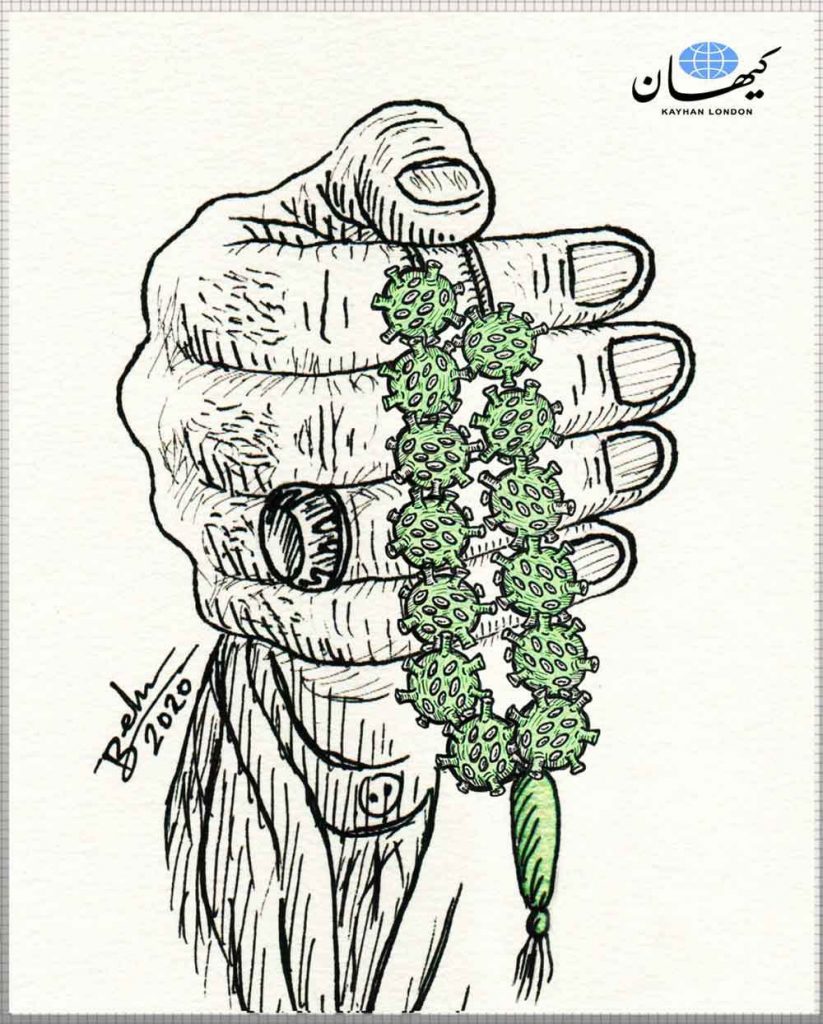