Up at 05:00 for a conference call. Back to doing some ARC management consultancy. 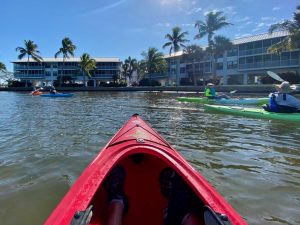 Then it’s an early start over to Rolf’s to got kayaking. We’re off to Pine island where we meet up with a group of about 14 from the kayaking club. Off for a 2-hour kayak around the waterways of Pine Island. Gorgeous weather, friendly people and an awesome way to spend a morning. Then we all troop off to lunch at a local fish restaurant that you’d never come across by accident but it’s packed. Good food and I even have lunch of Clam Chowder but pass on one of the 12 varieties of pie. 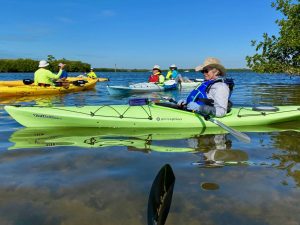 Back home for afternoon tea around the pool and yet more of that damn Handmaids Tale. Try some white wine (Gewurztraminer) a tad sweet but very tasty. Yes, I’d drink it again. Then to finish off a Basil Hayden Caribbean reserve nightcap. I really must stop drinking, but roll into bed a happy chappy after a great day. Thanks to Gerry and Diane for linking up with Rolf and Kathy, yet more friendly Americans. 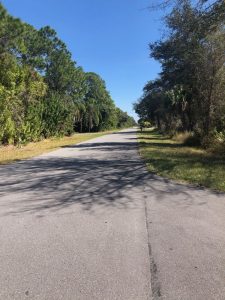 But the highlight of the evening has to be the visit from two burly police officers, one of them built like the proverbial brick shithouse, and both armed to the teeth. They had an alarm activation. But the alarms not even on. The big guy checks. Yes, the alarms disabled. Meanwhile, the other guy asks if we can prove we’re legally resident as home exchangers. I browse my .pdf’s, in the meantime, they both take one look at these two geriatrics, one of whom is eating her dinner on her knee, both are suffering the torture of watching The Handmaids Tale. While Wendy points out “my son’s a detective”. Clearly, we’re no felons. They leave before it all get’s too complicated and Wendy bursts into a long-winded monologue.

Now I know I’ve arrived when I see these – heavenly junk food. Didn’t realise you could get them in a supermarket. One of the benefits of shopping with Wendy. 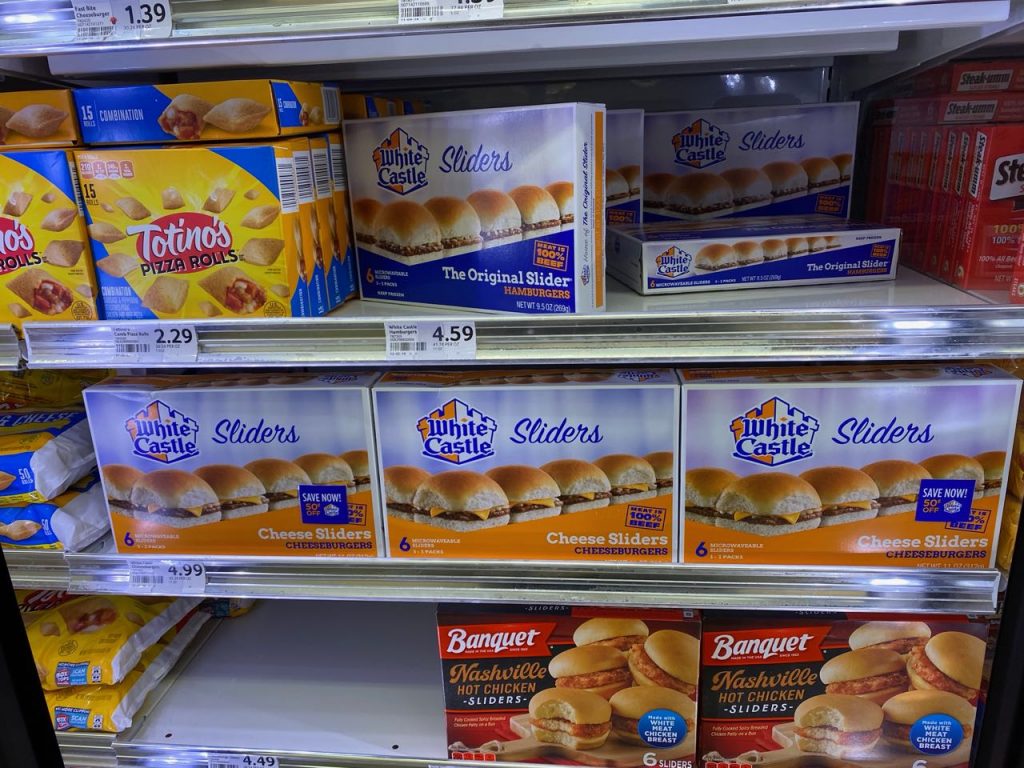 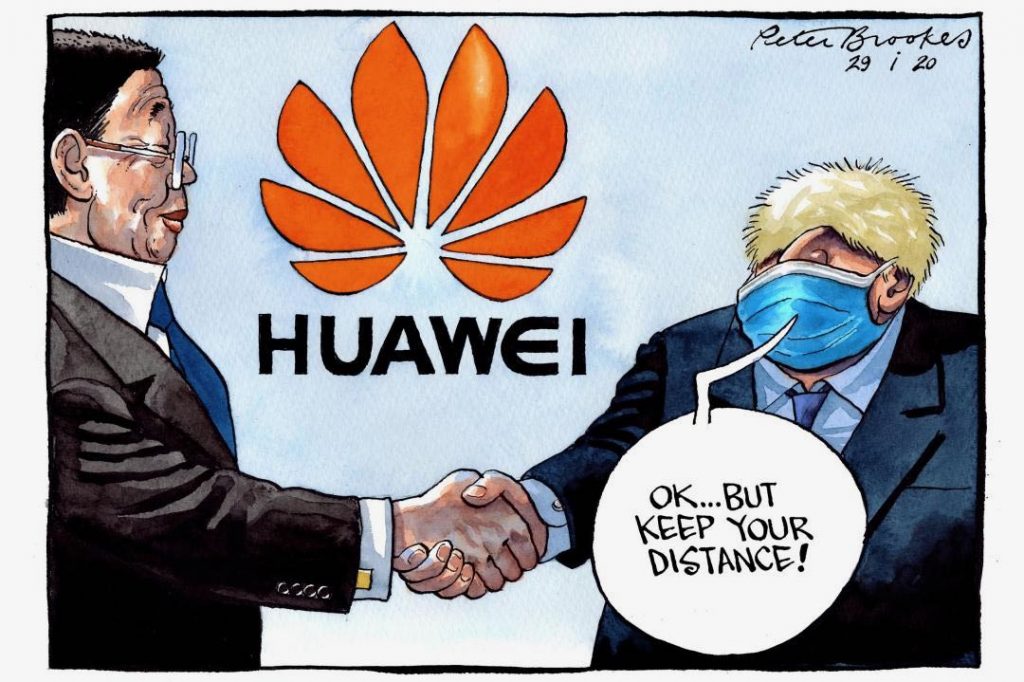 Yes, he’s let the Chinese spy on us and pissed Trump off. Great way to get a good trade deal. 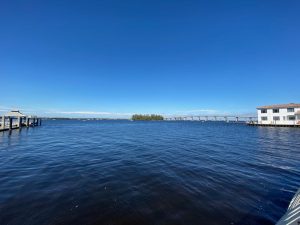 Another sunny day. Lazy morning browsing the news fro The Times (depressing) and The Wall Street Joournal (hilarious, no doubt it would be depressing if I was an American).

Then we set off to drive down to Naples but decide it’s too far and we’ve been there before anyway. Instead settle on a visit to Fort Myers, never been there. Soon discover the historic district and the Centennial Park which is being dug up so parking is a nightmare. 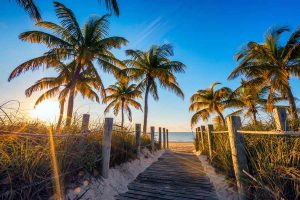 Have a wander around the historic district. As usual, not all that historic but try and find somewhere for lunch. Settle for a coffee for me and a subway for Wendy sat on a bench by the harbour.

Drive back through Cape Coral. Then the joy of another supermarket visit before home for afternoon tea. What an exciting life we lead.

Yeah, celebration all round as we watch the final episode of The Handmaids Tale. 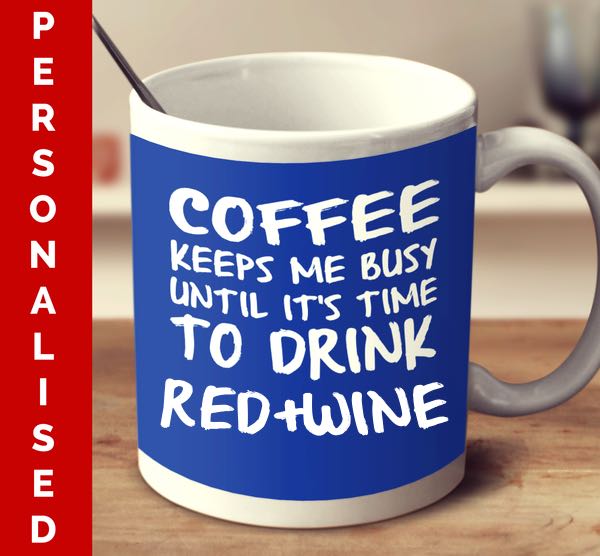 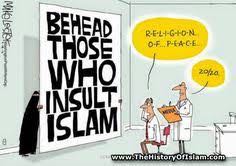 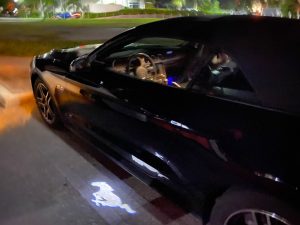 Mustang image to light the way to my rump hunter.

Finally got to the last episode of The Hand Maids Tale, huraah, it’s as slow as shit through a coffe filter paper. 36 fifty minute episodes, that’s 30 hours of our lives taken up by a series that could have been over quite effectively in 2 hours. Only to learn they’re doing a season 4. I thought we’d escaped the torture of that saga. I suppose we can always do the sensible thing and ignore it, really don’t think we can cope with any more of it, just a waste of our lives.

Here are some reviews:

“…often lapses into the realm of the deadly dull, making long and redundant loops around its original premise and revisiting already established resentments and animosities between characters.”

“The Handmaid’s Tale seems to be going too slowly, stretching out the story to fill the latest season.” 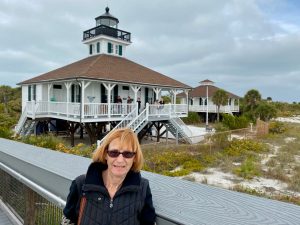 Lazy mornig as usual then drive down to Bayshore Live Oak Park for a stroll along the water front and out onto the short piers.

Wendy chomps away on her lunch and then we set off to Gasparilla Island to visit the Boca Grande Lighthouse. Don’t ask me why. It just seemed like an interesting place to go. By the time we’ve paid a toll to cross the bridge and a parking fee this little jaunt has cost us $9. Was it worth it? Sort of, but you never know until you try. 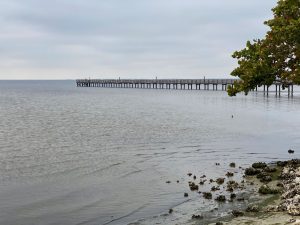 Then in the evening, we go out for dinner with our new found American friends Rolf and Kathy. Good food good wine and best of all good company. I try the shrimp and grits, actually taste pretty good but they have cheese in them. 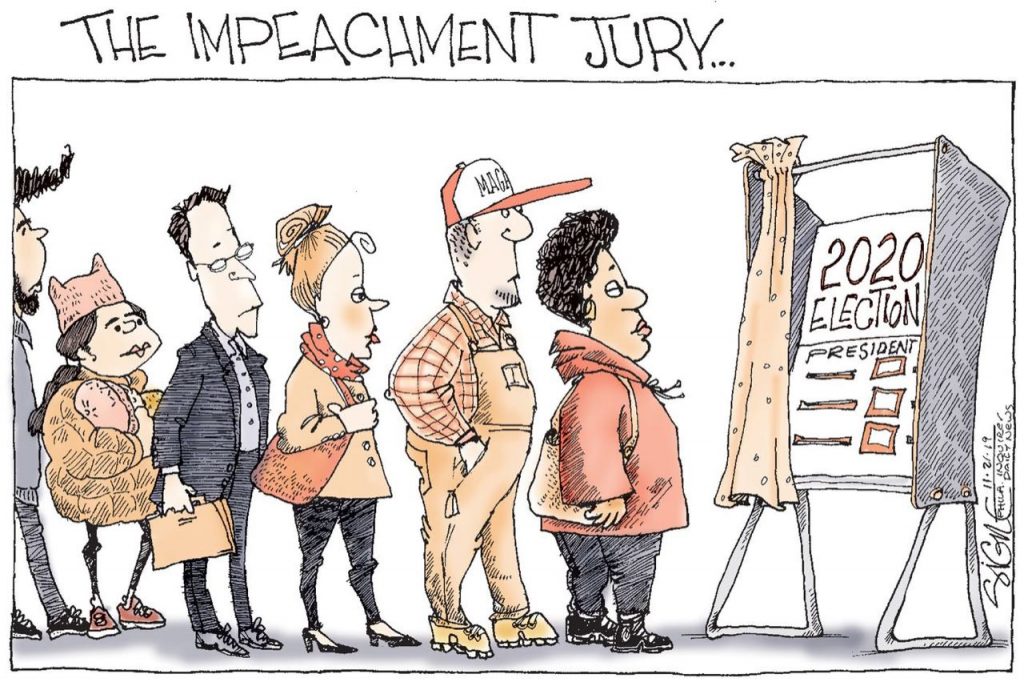 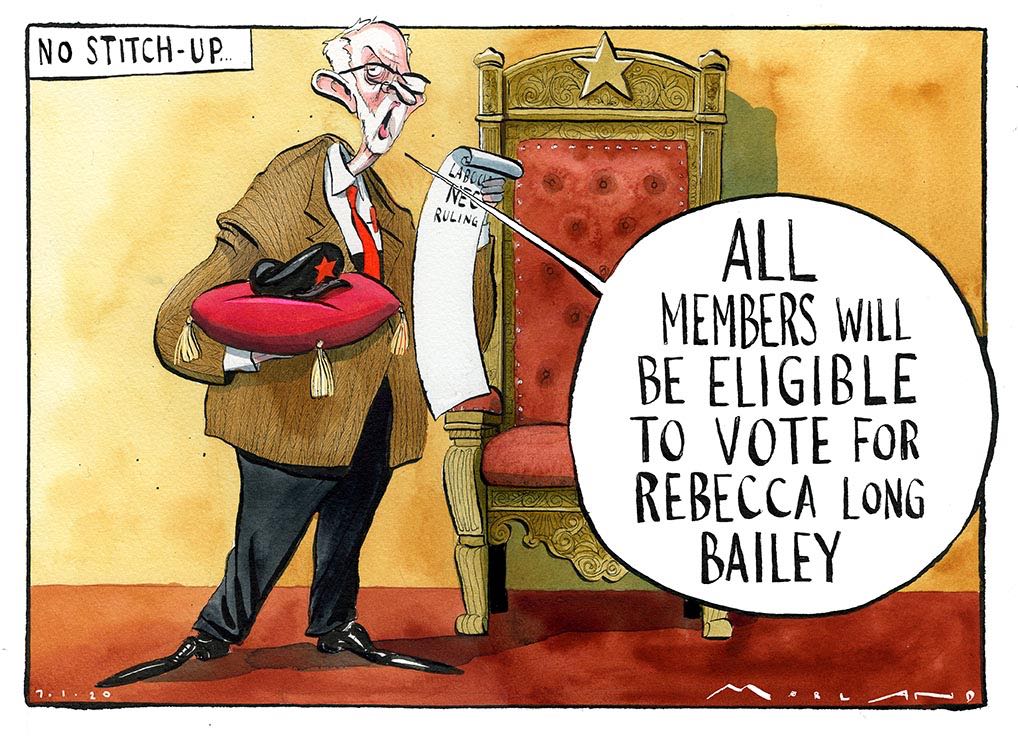 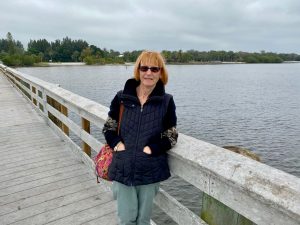 Lazy morning. Spend over an hour on the phone booking flights. What a nightmare. You think there’d be an AI solution to this.

Then it’s pickleball followed by the delights of a visit to the supermarket.

In the evening we celebrate BREXIT with the epitome of American junk food, 6 White Castles, for tea and a bottle of wine, white wine, I’m really getting into this white wine, followed by a quiet night in. Decide to watch the celebrations on BBC

Oh Joyous Day (to quote from The Handmaids Tale) – BREXIT at last.

Remember this 3 years ago? 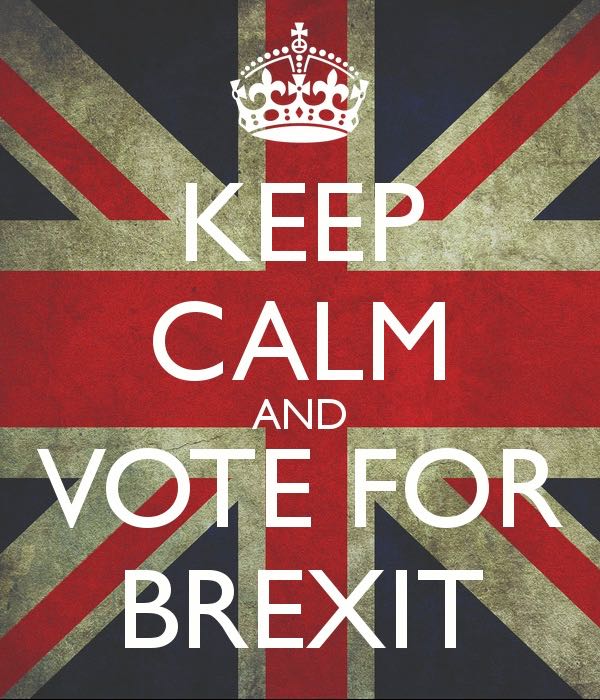 Then we had 3 years of treachery and incompetence, with the great and the good doing all they can to defeat the democratic will of the British people. Fortunately, a lot of those treacherous arseholes in parliament have now lost their seat, received their comeuppance for their arrogance and treachery.

But at last, we escape the Evil Union. Our 1776 moment. Now I can start to imagine how the founding fathers must have felt when they escaped. 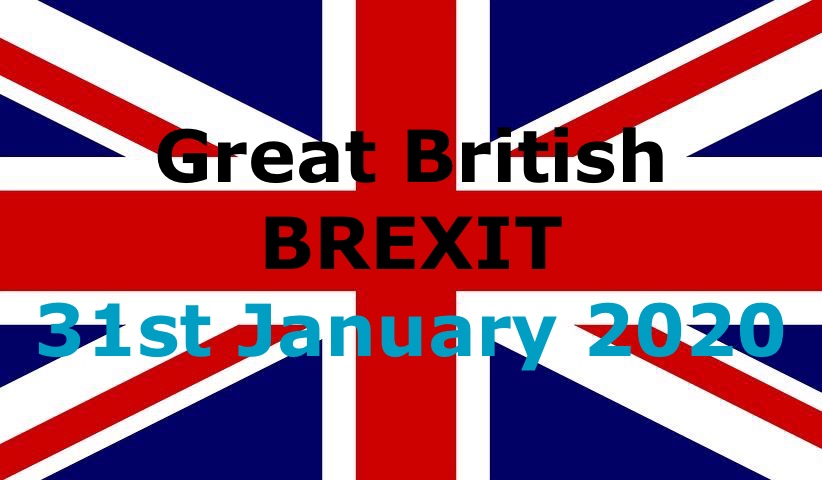 All thanks to this guy, dedicated his life to escaping the Evil Union, and yet not a skerrick of recognition from our government. Thank you Nigel. 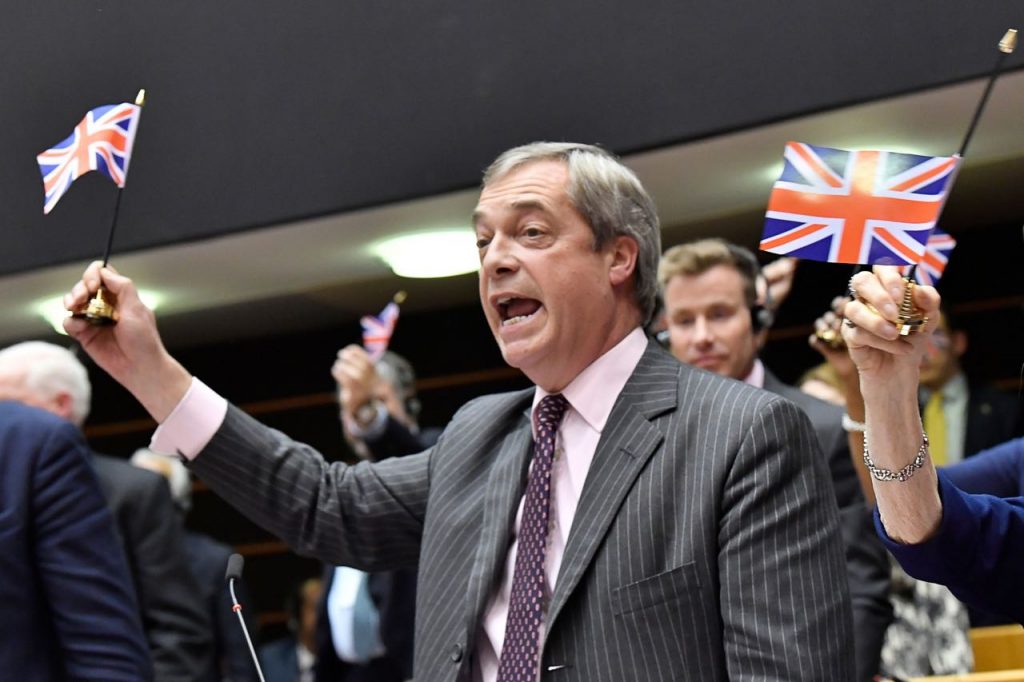 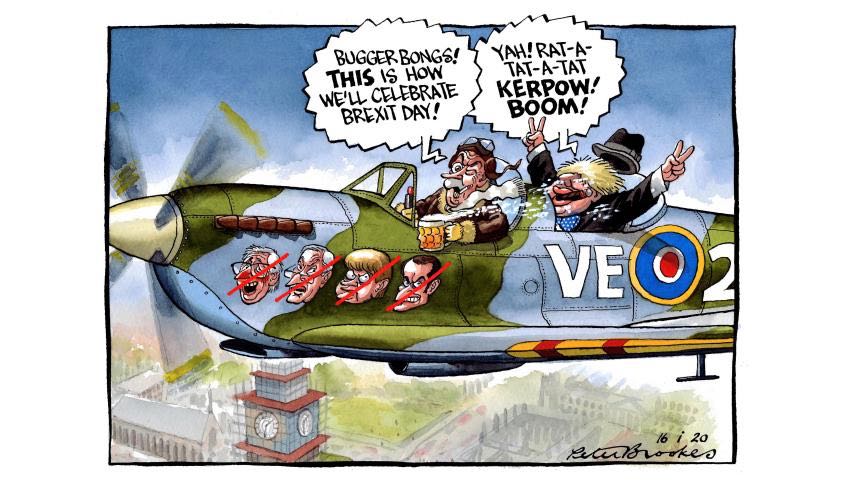 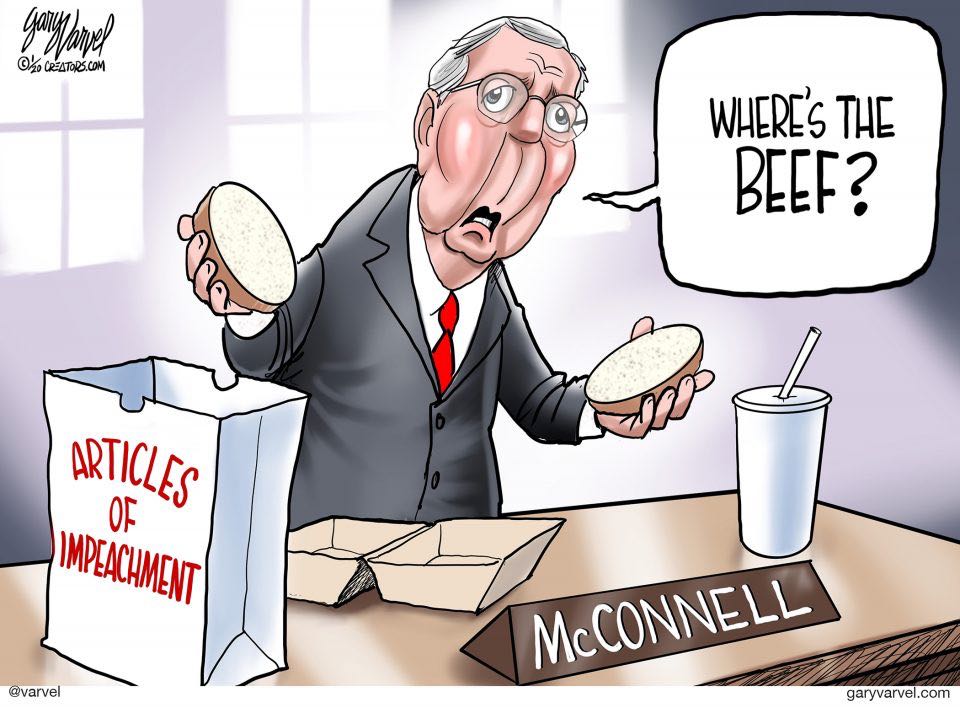