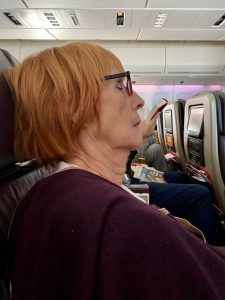 Up at the crack our sparrows to beat the Manchester traffic; taxi to airport; amazing we manage to get into the escape lounge – priority pass is a rip off.

Excellent virgin flight to Orlando. Plenty off free booze; comfortable; food was even quite good. Premium economy is worth the extra.

Arrive on time. Customs was quick and unnervingly friendly. Just had to wait 30 minutes for pick up to hotel. Hotel was ok – see rant / review. Early to breed. 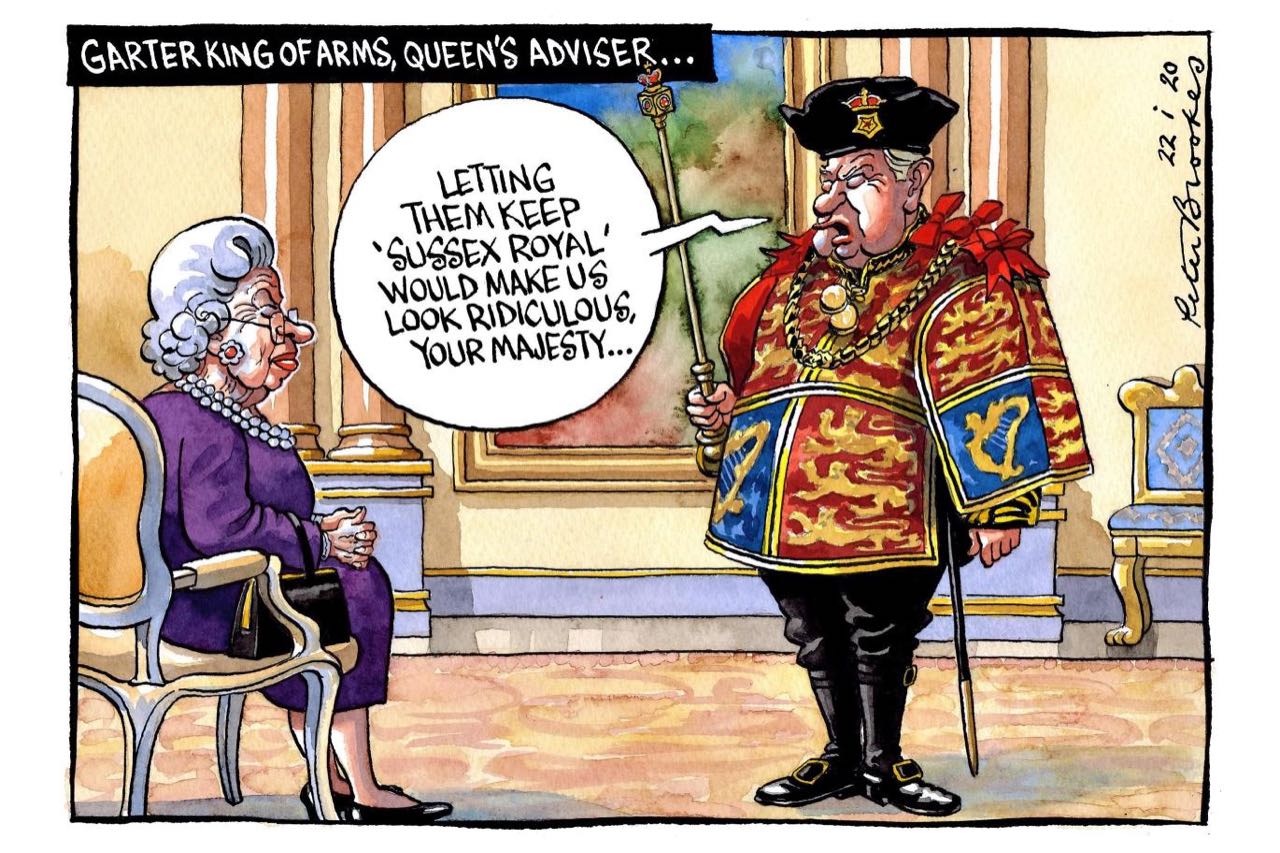 Moe of the Harry & Meghan saga. Who gives a damn. 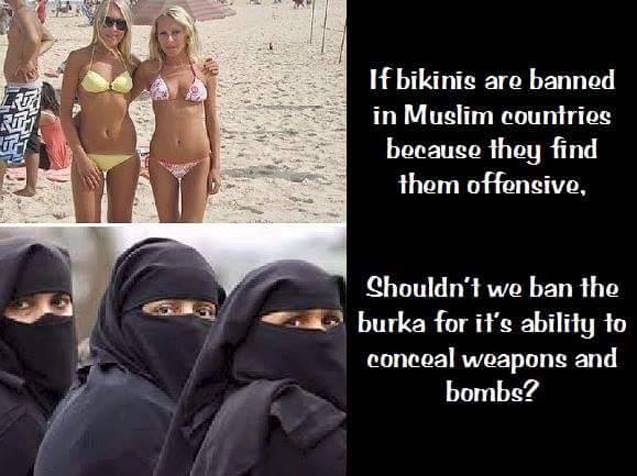 By what stretch of anyones imagination does this count as news:

What has the media come too, can’t they at least generate some false news rather than this puerile horse shit. 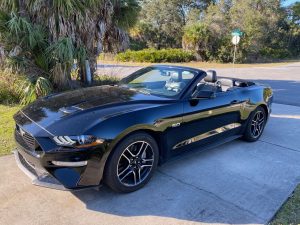 As usual first day up with the larks for typical hotel breakfast. For once I pass on the waffles. Well the whole of Florida seems to be in a corybantic tis was because there’s a cold front coming and it may get to freezing overnight. Bloody hell they should come and live in Belthorn. Meanwhile the rest of America has a new pantomime to watch with the senate impeachment trial. And I thought out politics was crazy!

Then get the shuttle back to hertz at the airport. There’s a whole row of President circle free upgrades. Some really tasty motors but hidden at the far end is a Ford Mustang convertible all 5 Litre, 460 HP and a top speed off 155MPH. I’m in love with it but Wendy doesn’t look to impressed. Chose the free upgrade to this bad ass. It’s got more knobs, driving modes, gizmos and switches than the flight deck of a jumbo. 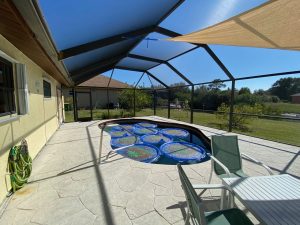 A classic rumpo hunter (if you don’t know what one is get some one over 60 to explain it to you), I’m in my second adolescence. Happier than a nerd with a Raspberry Pi.

The accelerator is scary, just the slightest touch and your arse ends up in the boot. Haven’t dare put it into one of the many sport modes, YET. Best of all though is the throaty roar of the four giant exhausts, not 2 but 4, time to get my own back on those young scrots with their noisy Fiat 500’s. 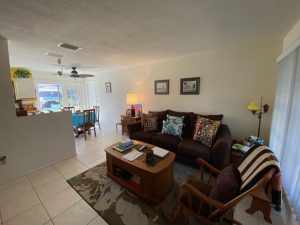 Then is off down to port Charlotte, just a 2.5 hour drive. Religiously stick to the speed limit s as I’m sure this car is a cop magnate. Good job as we see more motorists pulled over than there are dandruff ridden tea towels in Afghanistan.

Our new home exchange for the next 10 days is very homely, spotlessly clean and looks like a loved in home, not like your typical clinical rental. With 230MB of Wi-fi I don’t think we’ll ever leave. It’s 3 bedroom but not massive like most American homes, just right for the two of us and even has a swimming pool, a couple of kayaks (Wendy’s orgasmic about that) and two bike that look like they last time they had rubber to the road was world war 2. 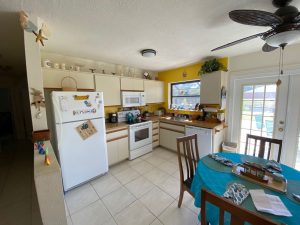 As a special treat for Wendy we go to Publix supermarket. Sadly I have to push the trolley to avoid her back playing up anymore. Now I know what purgatory must be like – I promise I’ll be good from now on.

Treat ourselves to sushi for tea (dinner for you southern softies). Then settle down to watch some more if the Hand Maids Tale, it’s slower than a herd of turtles stampedin’ through peanut butter. No alcohol today after the excesses off yesterday’s flight. 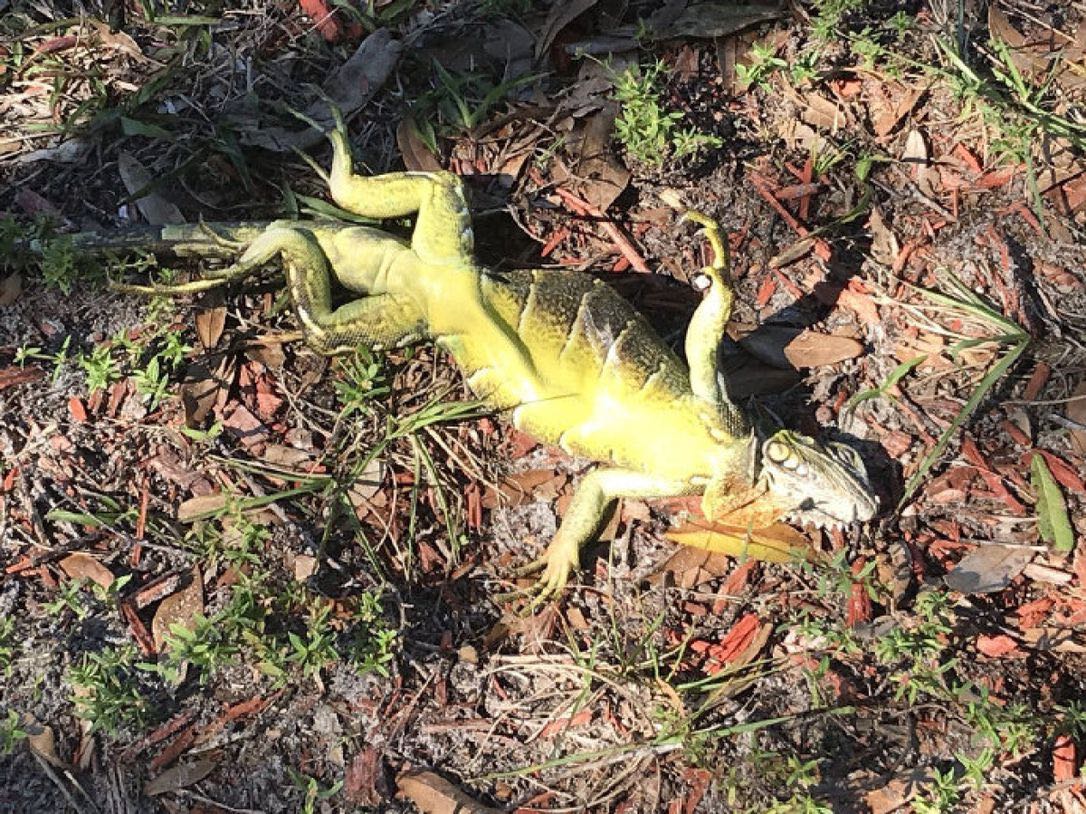 Looks like I’d better to check my travel insurance to see if we’re covered for being hit on the head by frozen Iguanas falling out the trees because of the cold. No weasel word to exclude that.

Beware Authorities in Florida have warned residents to watch out for a strange phenomenon during the unusual cold weather – iguanas falling from trees. 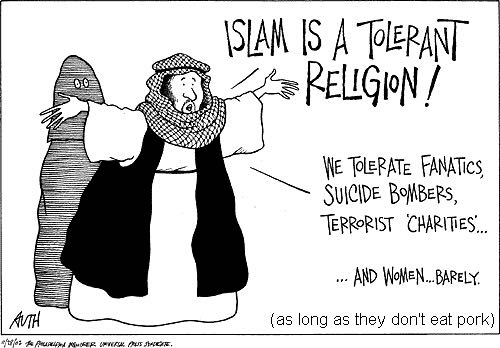 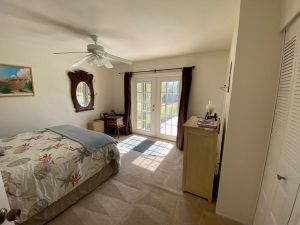 A city in northern Wisconsin will hold a vote today on whether to overturn a law banning snowball fights.

The snowball ban has been on the books since 1962 in the city of Wausau, where flinging packed handfuls of snow is outlawed alongside the shooting of arrows into buildings and the hurling of projectiles across pavements, playgrounds and other public places.

The city’s police department explained they did not seek to arrest consenting adults who have snowball fights. 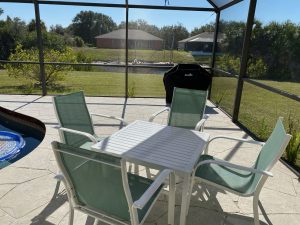 Up early again because we can’t sleep, still on UK time but getting better.

Usual breakfast of granola and fruit. Amazing two packets of cereal for the price of one.

Unpack and lounge around most of the morning.

Call in a Winne Dixie supermarket, wow a much better choice. I’m becoming quite an authority on shopping.

Lunch time we drive down to Punta Gorda to explore pickle ball opportunities. Looks like there’s a great drop in with 4 courts and only $3, but oh so busy. 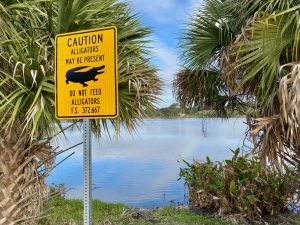 Not a good idea to swim then!

Doesn’t seem much around Punta Gorda so it’s back home for Wendy’s lunch – needs her sustenance otherwise she gets so hungry she’d eat the balls off a low flying duck!

Then we set off for a short walk to the local park. At least here we don’t get socked wet through or have to battle against a howling gale.

Evening see’s us trying to keep awake through the fast paced Handmaids Tale. Not help by having drunk a bottle of Chardonnay between us. Yes Wendy’s trying wine and I’m starting to widen my horizons and exploring white wine. So far so good. 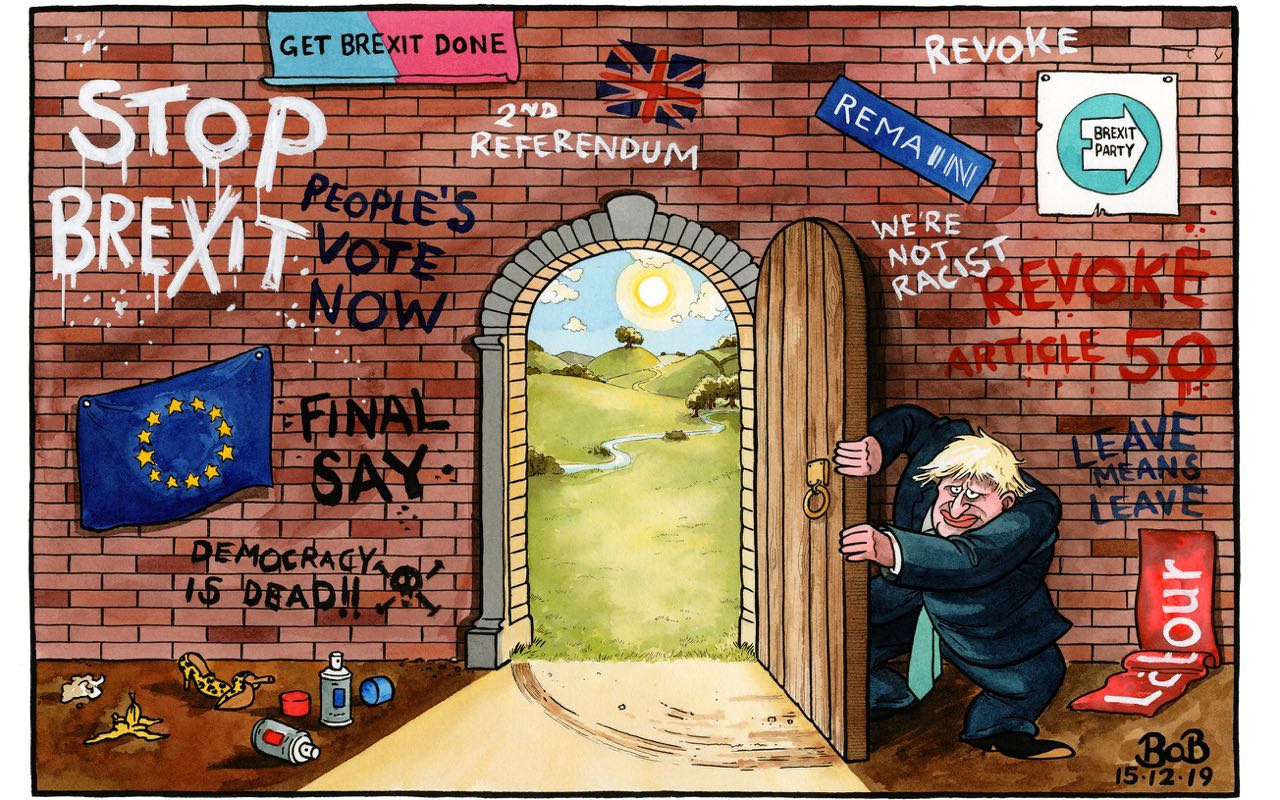 At last. Will the removers now accept it and get behind it. I doubt it.

Just after a time of year when Christians throughout the World were celebrating Christmas, it may also be worth reflecting on what is happening to freedom of religion and how many Christians are being slaughtered.

A quote from the Times sums it all up “A review led by Philip Mounstephen, the Bishop of Truro, and commissioned by Jeremy Hunt when he was foreign secretary, concluded this year that the persecution of Christians is at near-genocide levels in some parts of the world.

It is an under-reported crime.”

Near genocide level and yet no one, including moderate muslims, dare talk about the elephant in the room “Islam” for fear of persecution or being called racist. It really is about time we started talking and doing something about it. 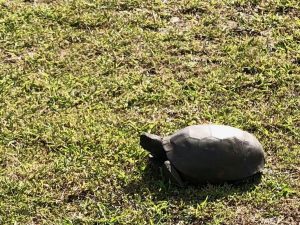 Yet another lazy morning but at least staying asleep longer. Who knows we may even stay up until Noddies gone past Big Ears tonight – 22:00 for those of you who never had a Noddy watch or don’t have a clue what it means.

It’s a warm sun and cloud day, mainly sun and 75 degrees. Get to spend sometime sat out around the pool.

Have to pop down to Pubix for tonights tea.

Then after Wendy’s lunch I head off to pickle ball and Wendy goes for a stroll. Pickleball is busier than ants at a picnic. They’ve 4 courts but could do with 10, so only manage to get 5 games in during a 2 hour session, but every ones friendly enough.

More Hand Maids Tale and as it’s a non alcohol day we may even manage to stay awake. 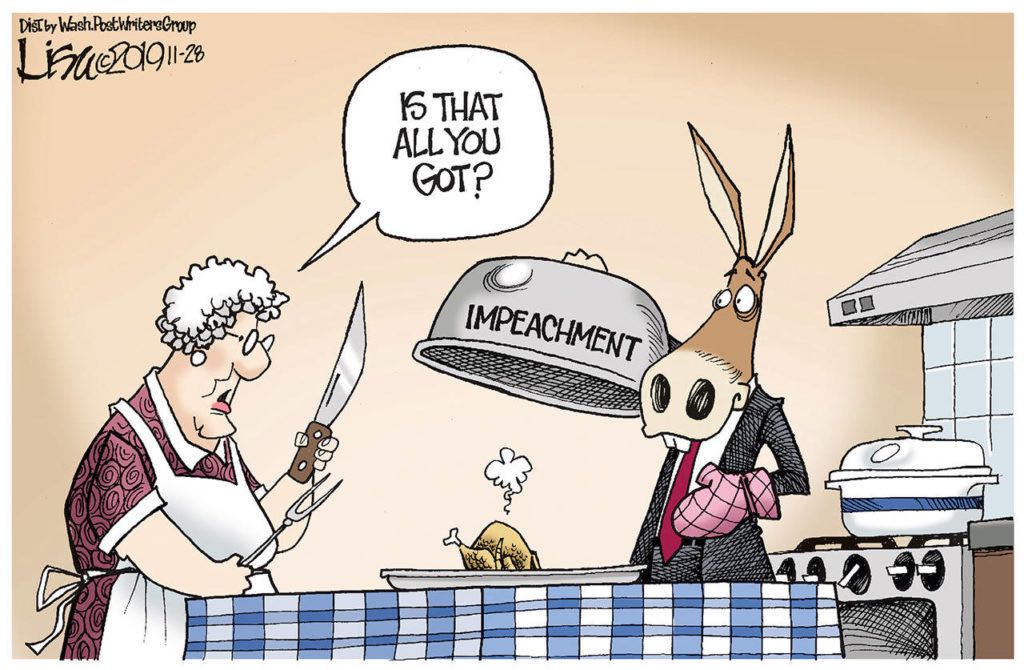 Another American political pantomime keeping us entertained. If only the senators can stay awake.

The snowflakes are at it again. This time they want to ban chlorinated chicken for the USA under any new trade deal and yet:- 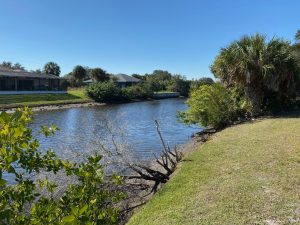 The canal at the bottom of our garden. Can’t wait to launch the kayak.

As long ago as 2005 the EU’s own Food Safety Authority said: “Exposure to chlorite residues arising from treated poultry carcasses would be of no safety concern.” In his pamphlet Fertile Ground, published by the Institute for Economic Affairs, Shanker Singham points out: “The [European] Commission even submitted a proposal in 2008 to relax EU rules on PRTs. The effort, however, was struck down by member states with all except the UK voting against.”

So here’s the situation: when we were committed to remaining in the EU, our government wanted to accept so-called chlorinated chicken, but now we are leaving, supposedly to escape from the suffocating embrace of anti-competitive, one-size-fits-all regulation from Brussels, our government is determined to remain subject to it. There’s not even method in this madness.

It’s not as if we have the slightest right to lecture America on food safety. According to data from the Organisation for Economic Co-operation and Development, US citizens eat more than twice as much poultry per capita as Europeans, but instances of food poisoning by salmonella and campylobacter per 100,000 population are 20.4 and 66.3 in the EU and only 15.45 and 13.45 in the US. And the 2019 figures for global food quality and safety (as measured by the Economist Intelligence Unit annual survey) have America in fourth place, behind only Finland, Norway and Sweden. The UK is in 18th place. 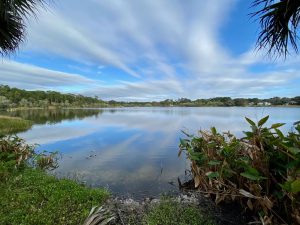 Ollies pond, the in place to swim with gators.

In fact, our own broiler chickens — like those in America — will find more space in an oven than they ever did alive.

In short, there are no morally consistent animal welfare grounds on which to reject mass-produced American poultry, unless we were to demand our own industry move exclusively to free range. But only 3% of chicken bought in UK supermarkets is free range — showing the vast majority of Britons are captivated not by the thought of their dinner having had freedom to roam while alive, but by the fact they can buy a whole chicken, and thus feed their family, for £3 or so.

Besides, why can’t the British consumer be given the choice? Let him or her buy American chicken, labelled as such,