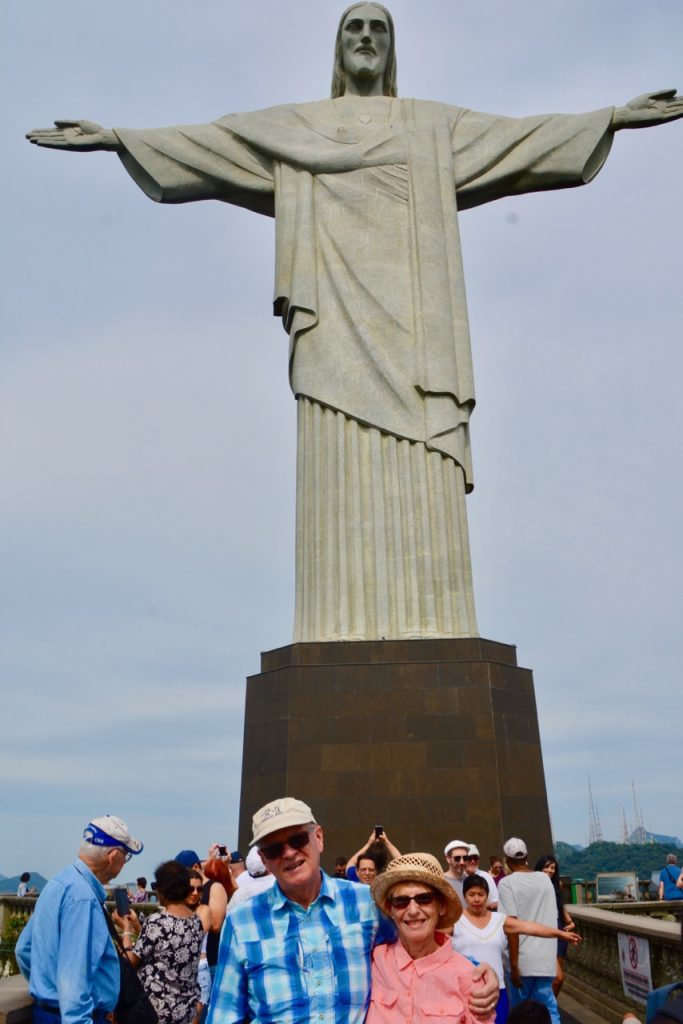 Lazy start to the day. Then set off down to Bretts.

Well crap a dead cat if the M6 isn’t just one roadwork North of Birmingham. It really is about time there was some so called planners and Ministry of Roadworks dickheads fed to the Lions for some Saturday afternoon entertainment. You really couldn’t make it up, 18+ mile roadworks, along with signs proudly proclaiming roadworks for the next 3 years.

Dinner at Brett’s after a visit to Waitrose.

If builders built buildings the way programmers wrote programs, then the first woodpecker that came along would destroy civilization.  ~One of Murphy’s Laws of Technology 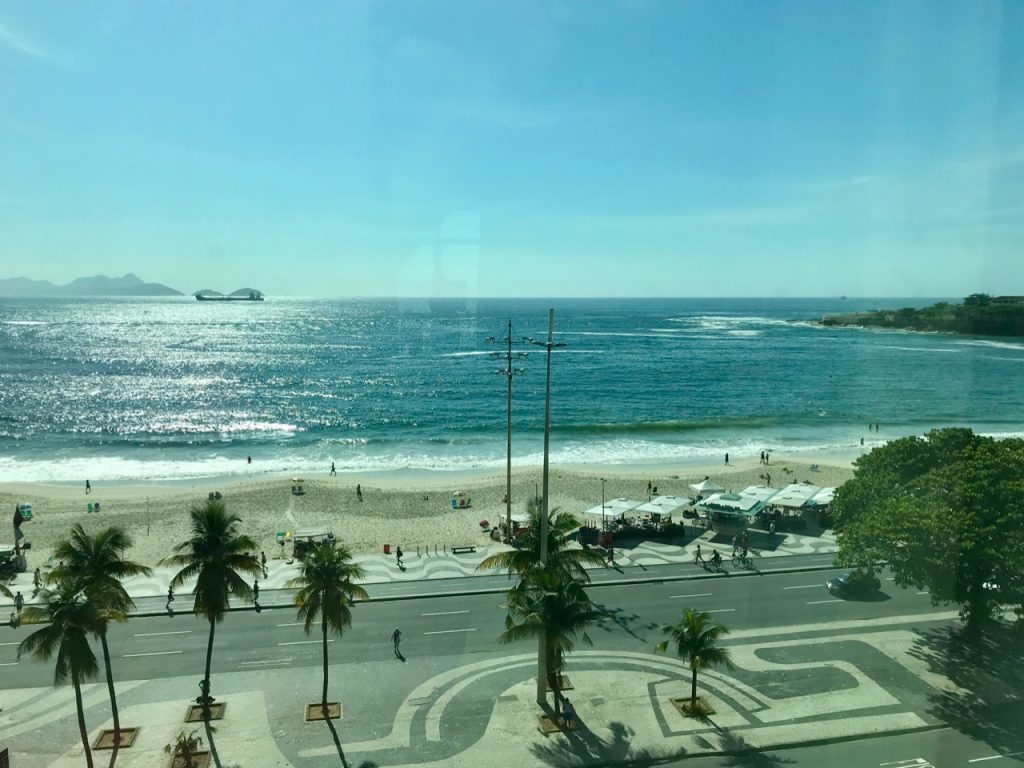 Cococabana beach from our room.

Brett drives us to terminal 5 Heathrow.

Have to use one of those dumb check in machines rather than join a small queue to speak to a human. But of course it struggles to read my passport. Who designs these systems? Do they ever test them? Then we check luggage in with another idiot machine. Poor HCI all round. Confusing where to scan, second suitcase comes up overweight all because it was still logged as first passenger. I bet that occurs regularly.

Who says AI hasn’t already taken over and enslaved us.

Moral to coping with all this confusion – log in online before and just bag drop. 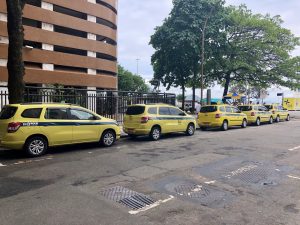 More taxis in Rio than s many than there are tea towels ridden with dandruff in Afghanistan.

Security was very smooth. No queues. Although Wendy’s brandy caused the usual confusion.

Amazing that the lounge wasn’t full. Very comfortable and a good breakfast.

Flight was on time, comfortable and they didn’t loose our luggage, all despite my dread of flying BA. Copious wine and brandy.

Pick up a maniac taxi driver at Rio de Janeiro. I think she was either hormonal, wrong time of the month or had just fell out with her boy friend. She be better in a demolition Derby.

Check in to hotel and are greeted with a glass of champagne – more booze. This geezer tries to carry my suit case, so pretension and idle just like valet parking, not really my thing.

Our executive room is gorgeous. 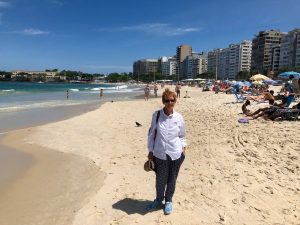 Hotel is a fantastic 5 star. Room is lovely, complete with sea view over the world famous Cococabana beach. Breakfast is fantastic, even champagne available if you’re so inclined.

Decide on a stroll into town to pick up some basics. Place can’t be too uncivilised as they have a Starbucks, although there does seem a lot of poverty. In the afternoon we went a stroll along the beach. Bar keeper tried to rip us off, but not having any of that – challenged him and he coughed up the right change. Oh he was oh so sorry, he didn’t realise – Yeah I’m sure. 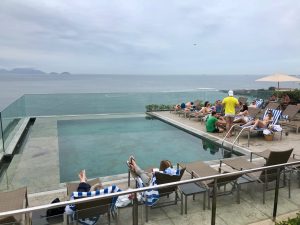 Afternoon tea around the hotel pool on the 16th floor. Amazing the Germans and their deck chair towels get everywhere.

Evening meal in the hotel is delicious and not too badly priced. After the excesses of alcohol yesterday I’ve sworn off alcohol for a few days, that is until the Maitre De comes up and asks us if we’d like to try some free samples of Brazilian wines. It would have been a sin and impolite to say no, so I girded me loins and suffered. Sadly they were all white wines, very palatable and I ended up drinking more than if I’d ordered a couple of glasses. Oh well. As they say, shit happens, suck it up. 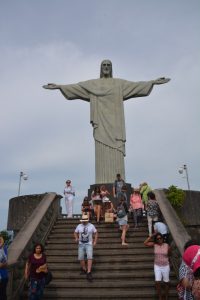 We’re booked on an early morning tour – to beat the crowds – to go to the big statue of Christ and then to Sugar Loaf Mountain. Great idea. Only downside is that pick up is at 06:40. Early awesome break fast then a short stroll to pick up point.

First stop is the statue of Christ. Drive up through the urban jungle – literally a national park / jungle in the middle of a city. Thankfully, with all the chemicals were lathered in, no mosquitoes come within a 100 yards of us and any humans will have to wear hazmat suits. Pass on the lift to the top. Do the 220 steps.

Thank god we went to see this early. At 08:00 it was heaving, hotter than the hinges of hell and more folks than queueing at the pearly gates. Heaven only knows what it would have been like by lunch time. 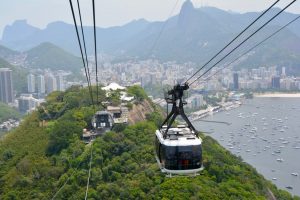 On the way up to Sugarloaf.

Then it’s off to Sugar Loaf, two cable car rides and hardly any steps. Not quite as busy as our religious experience. Awesome views.

Afternoon tour consists of suffering Rio Traffic. Visit to the carnival place to see where it is held, some costumes – which if you happen to be a transvestite you can try on – or even have your photo with a trollop in high heels, a skimpy dress and boobs like two giant melons just about to cause a costume failure in their attempt to escape their confines – I pass.

Then it’s onto the football stadium, with some geezer trying to imitate Pele, then onto the cathedral. Very impressive but I’d already had my overdose of religion for the year. 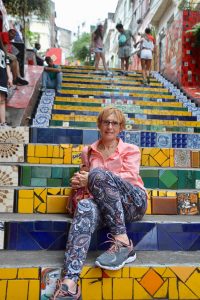 Finally we go to the Saint Teresa steps. All covered in pottery tiles from around the World. You can go all the way to the top if you really feel like risking being set upon by thieves and vagabonds. Our guide warns everyone not to. Not surprised really as it’s dodgy enough at the bottom to make me appreciate the benefits of open carry.

Get to try some local spirit. In the raw it tastes like schnapps / fire water but mostly they’re just excess sweet calories, in which case you really might as well just drink a flavouring. Bang goes my alcohol free day again, but fortunately such small sample that even one of the elusive mosquitos wouldn’t get drunk on. 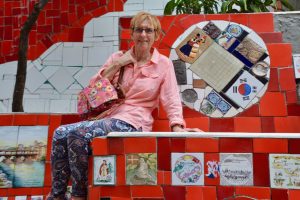 More steps to climb on.

Then it’s battle through the traffic back to our hotel.

For our evening meal we have been recommended the Churrascaria Palace for an all you can eat meat extravaganza – guaranteed way of avoiding Vegetarians and other tree hugger types. Every form of meat you can imagine and they just keep bringing it out for you to try along with a salad Buffett. In the end the meats win and we both give up.

Talking of which we’ve spent a fortune on every conceivable mosquito killer / gallons of repellent / wipes / spray / gel / bee keepers head gear that would delight muslim fundamentalist and so far not a single one has been seen. 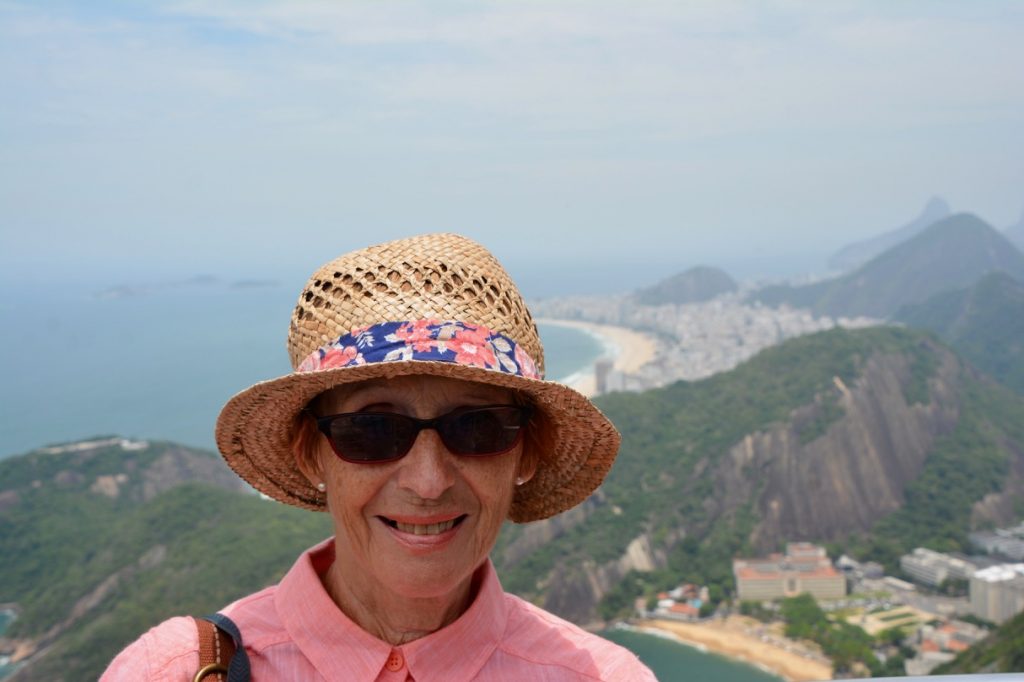 It’s Dia de Finados (All Souls Day) today so the whole country is on holiday and I think they’ve all come to Rio. A festival of the dead was originally a Pagan belief that the souls of the dead would return for a final meal with the family and placing candles in the window of houses would guide the souls back home, and another place was set at the table. 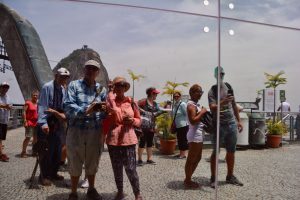 After yet another awesome breakfast we set out to hire some bikes for a ride down Ipanema and Cococabana beach. First bike shop and the entrepreneur is too lazy to get off his arse and come and talk to us; second shop only accepts cash; third shop doesn’t speak a word of English. Pass and head off on shank’s pony down Ipanema beach. Actually given the number of bikes on the bike paths, it would have been a death wish on a bike. The three lane road has been closed to traffic so everyone can stroll along. It’s heaving with all those souls on holiday. 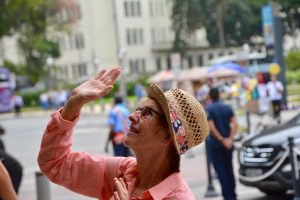 Stop off at three different places to have an iced tea, but the scruffs running these beach cafes have even less entrepreneurial skills than your average Frenchmen. End up having coconut milk out of what I hope was a fresh coconut.

Booth beaches are heaving, all very clean. Sadly no topless bathing, although given some of the thongs dividing those two globes of heavily dimpled adipose tissue it was probably for the best. If you weigh over 16 stone you’re probably better off in a burkini (perhaps that was all these Muslim clerics intention for the burka) rather than causing offence. 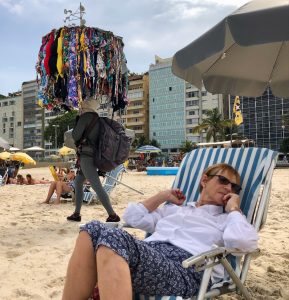 On the beach. Let the shops come to you.

In the afternoon we venture onto Cococabana beach. The hotel provides towels, deck chairs and umbrellas, all very civilised. Fascinating watching the locals selling their wares. Merchandising gone mad, I think you can just about buy anything from these itinerant mobile emporiums, although I have to say I didn’t see anyone selling beds. Just manage an hour before boredom and sun stroke sets in.

For evening meal we chicken out and stay in the hotel for great food, reasonably priced and in the top ten on TripAdvisor. Another alcohol free day, despite many temptations. 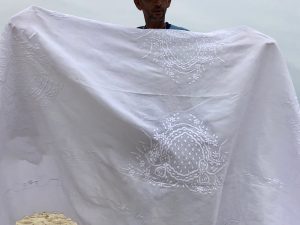 Want to buy a table cloth while on the beach. Might come in handy.

Lorry parks on the M25, planes crashing into each other in mid-flight, thousands of passengers – those who survived the collisions of course – will be stranded and unable to go back to work, UK citizens living abroad will be locked up and have their pensions confiscated, the NHS will run out of insulin and Band Aids, the Queen will have to move to Switzerland or possibly Uganda, our ports will shut down and ships’ captains will simply dump their cargo into the sea, our squirrels will infect everyone with rabies…I can hardly wait to hear what else is going to happen. 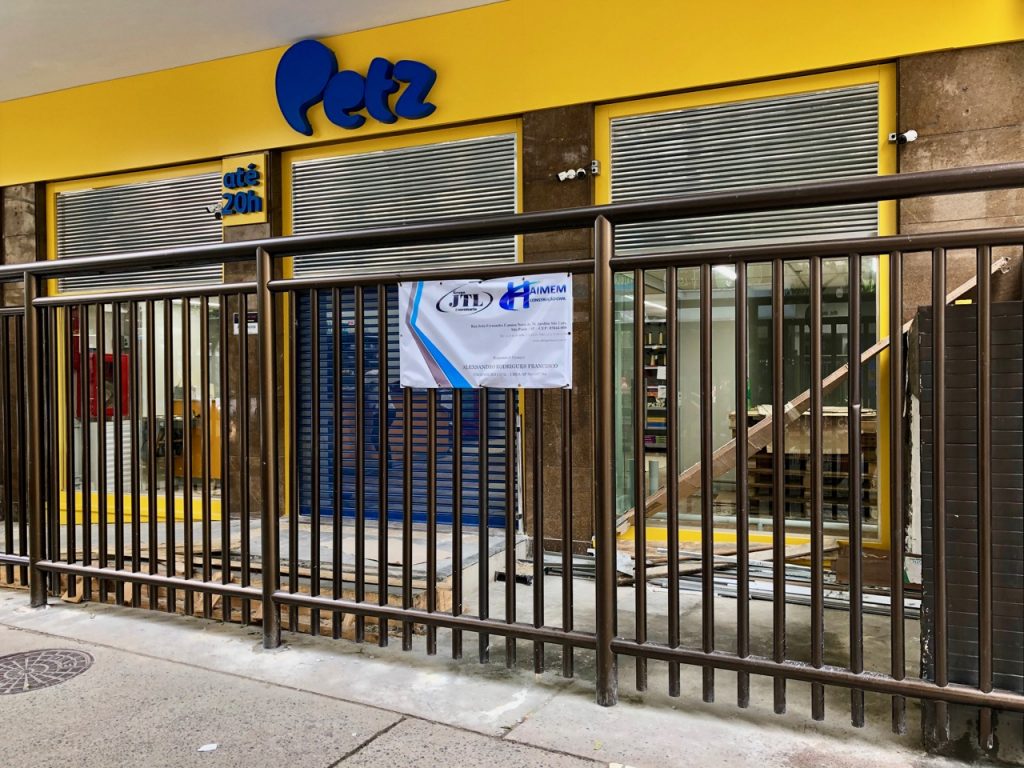 Security railings everywhere, says something about the crime rate.