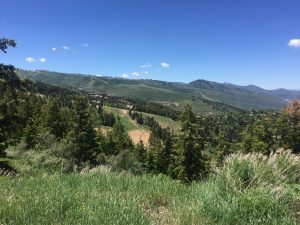 Sadly the promised snow did not materialise in the town. They got a sprinkling on the mountain.

Dropped Wendy off at the hospital to volunteer. Bit of a lazy day for me. Too cold and wet for my short bike ride.

Went to an outdoor photography lecture at the library. Interesting.Made me realise how poorly I know my camera. What are all those knobs and buttons for? I just put it on auto and it spews out pretty pictures. Memo to self, explore my camera more.

In the evening we go out for dinner and bridge lessons at Bob and Marilyn’s. Bob knows how to play bridge so he’s taken on the onerous task of teaching the 3 of us. Have a great evening.Great food with spicy carnitas. Great company and thanks to Bob we get to understand the basics. Certainly a complex game and needs good memory and strategy. Seems like having a winking code between you and your partner is out, and no you can’t write things down or use your iPhone. Challenging.

Now the adult entertainment titan is asking you to chip in for the crowdfunding campaign so the device can make it to market.

The ‘minimeyes’ – as it’s called – is an inconspicuous motion sensor that leverages infrared technology to mute your speakers and hide all open windows from your desktop as soon as it detects unexpected intruders. 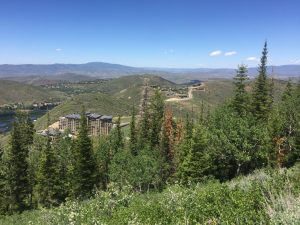 Up and out early with Bob to try out the ride down to Starbucks and back up to the old Barn ready for Fridays “Leisure Bike” ride that Im leading. Wow its a tad cold. Stop at Starbucks for a well deserved coffee. Manager confirms they will do a free coffee tasting at 11:30 for us riders on Friday – just like the US governments promise to the Indians, not worth a bean.

Just get back from my morning’s exertions, when Hal and Angela turn up ready for our afternoon hike. Pick Bob up and off we go with Angela channeling away, picking flowers and playing eye spy. Walk Mid Mountain from Silver Lake down to Deer Crest and then down to Snow Park Lodge. A pleasant, mainly downhill hike. Entertainment provided by Angela, she did really well to complete it.

Anne and Kevin arrive about 21:30 after a long drive up from Las Vegas.

In preparation for the start of BREXIT talks it’s time to remind us why we want out with a few EU jokes: 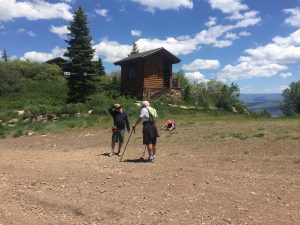 On Swedish people
Ole (Norwegian) and Sven (Swedish) went on a fishing trip to Canada and come back with only three fish. Ole says,
– The way I figger it, Sven, each of them fish cost us $400 !
– Well, at dat price it’s a good ting we didn’t catch any more of em than we did, says Sven.
 
On Norwegian people
– How do you say ‘genius’ in Norway?
– A tourist. 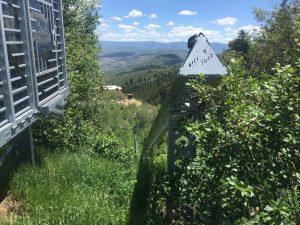 How the other half live with their own private ski lift.

On Danish people
– Why do Danish people never play hide and seek?
– Because nobody wants to look for them.
Sweden was in the past just a part of the Danish Kingdom. For historical reasons, Swedes still bears the Danes a grudge. Danes tend to be depicted as untrustworthy and imbued with the spirit of dolce far’ niente, a beer-drinking, happy-go-lucky, vaguely unhygienic and profoundly disorganised people (Read more in French).
 
On Finnish people
“The difference between a Finnish wedding and a Finnish funeral is that at a funeral there’s one person not having vodka.”
 

Manchester Attack: What They’re NOT Telling You. TOLERANCE.

Too true. We are at war. Smell the coffee. Time to do something. 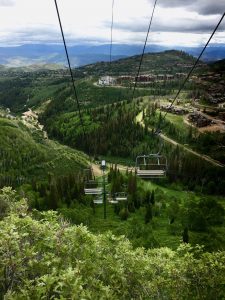 Up and out early with Bob and Marilyn for a great morning Kayaking on the Jordanelle reservoir with the PCMSC.

Lazy afternoon. Took Kevin for an orientation drive around PC and a superb coffee in Campos at PCMR base, while Wendy and Anne get their kicks and fix of the week at the local supermarket.

Then it’s off up to the National Ability Centre (NAC) to teach archery. Turns out that we have 3 instructors and just one pupil. Never mind gives us a great chance to get some practice in with their dinky American compounds – yes there is something in America that isn’t bigger. also have a go with a recurve. A new experience but you wonder whether the arrow will have the get up and go to get to the target. Not for me. Prefer my compound with a bit of umphh in it. 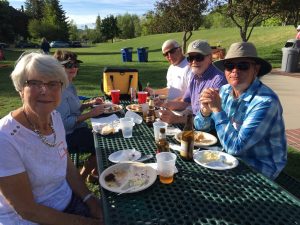 Led the first of new class of bike ride for the Park City Mountain Sports Club (PCMSC). “Leisure rides” are shorter and slower than the “Tour de France” rides normally done by the club. 8 turned up and had a good ride in great weather. Let down by Starbucks at the last minute, their free coffee tasting didn’t materialise. That’s it from now on will have to boycott them and suffer Nescafe – now theres a fate worse than suffering coffee with ISIS. Contemplating organising a protest march.

In the evening we go to the PCMSC’s “Dogs and Suds” picnic with Kevin and Anne. No the dogs doesn’t mean you have to bring a dog, it’s merely hot dogs. As for Suds, well they’re beer. Didn’t find that in my “Teach Yourself American” book.You give them a language and oh how they pervert it. Pleasant evening with Bob and Marilyn also.

More on the EU: 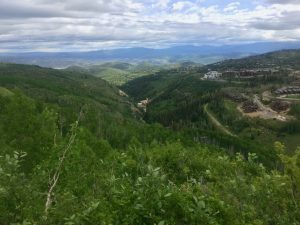 On Swedish people
– What is the difference between Swedes and Finns?
– The Swedes have nice neighbors!
Finns mainly make fun of Swedes, their direct neighbors. They depict them as not very bright guys with no sense of humor. Surprisingly, Finnish people tend also to make fun of themselves and their alcoholic habits (Read more in French).
  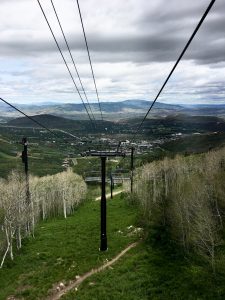 On Swedish people
“Keep Denmark clean – show a Swede to the ferry.”
Since there was a historical fight for hegemony between Denmark and Sweden, Danish people tend to depreciate their northern neighbors in their jokes. The joke above may be a reference to the Swedish habits of coming to Denmark to buy alcohol and get drunk in the ferries on their way back to Sweden.
 
On Belgian people
– Why wasn’t Jesus born in Belgium?
– God couldn’t find three wise men in Belgium.
Dutch humor has changed over the centuries. In the 16th century, the Dutch were renowned for their humor throughout Europe, and a large number of travel journals have notes on the happy and celebratory nature of the Dutch. But with the decline of the country over centuries, Dutch lost their sense of humor. During the Second World War, Americans soldiers were even instructed not to tell jokes to the Dutch as “they wouldn’t appreciate it” ! Dutch have nowadays a dark ironic and sarcastic humor which is often quite bold.
  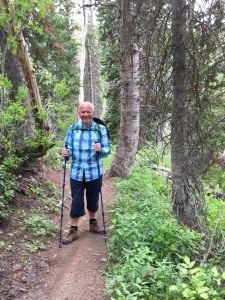 On Polish people
– What do you call it when 2 whites are pushing a car?
-White Power
-What do you call it when 2 blacks are pushing a car?
– Black Power
– What do you call it when 2 Poles are pushing a car?
– Grand theft auto.
Some of the earliest Polish jokes, also called Polack jokes, in reference to an ethnic slur, might have been told originally before World War II in disputed border-regions such as Silesia, wrote Christie Davies in The Mirth of Nations suggesting that “Polish jokes” did not originate in Nazi Germany, but a lot earlier, as an outgrowth of regional jokes rooted in “social class differences reaching back to the nineteenth century”. In the US, polish jokes are very popular. In German jokes, Poles are depicted as lazy and unemployed people who distinguished themselves in the art of stealing. 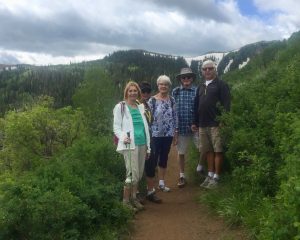 Up and out early for an easy hike with Bob, Marilyn, Kevin and Anne – Mid-Mountain Empire pass to Payday – followed by a free ride down Payday lift. A tad cold on the lift. Then it’s a Amber Ale in the Legends bar. Took them that long to serve it that by the time it was delivered it had gone stagnant. 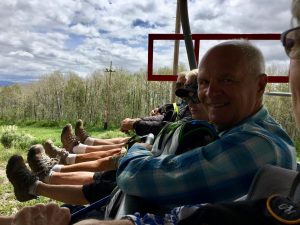 Feet up after the hike.

Then in the evening we all go down to the “Full House” Asian restaurant to celebrate Bob and Marilyn’s 30th wedding anniversary, then back to our place for tea and cake. Well wine and no cake for me.

Truck of Peace: Antifabulous
This entry was posted in Uncategorized. Bookmark the permalink.