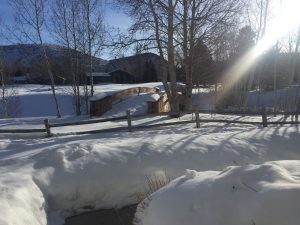 View over the bridge onto golf course.

Sat on the bus on my way to the slopes when 25 stones of adipose tissue plonks down with a scumboarder big enough to stop him sinking. Can you imagine the inertia in the guy as he hurtles down. It’d be like being hit by an inter-city express.

Thank the FSM and common sense for ski helmets. Just got on the lift, not even sat back and this moron brings the bar down at full tilt before we’d even got out the lift station. Saved by my helmet. Give him a few choice words and he’s sent to Coventry for the rest of the ride as we all ignore him.

Wendy’s off down to Kimble junction on a shopping mission for Angela’s birthday present.

Jere and Diane come round for dinner, first time we’ve got to see them properly since last year. A boozy evening, down some excellent Zinfandel. Great company, great food and great wine. 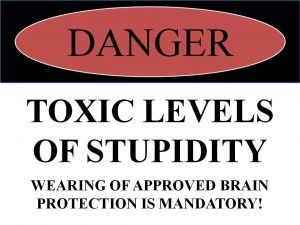 Well crap a dead cat. The government has been defeated after the House of Lords said ministers should guarantee EU nationals’ right to stay in the UK after Brexit.

I don’t believe it. Are they mad? Have their brains dropped out? The goody, goody two shoe, lefty liberal multicultural appeasement monkeys cannot be serious. Whether you voted for BREXIT or not you don’t go into negotiations and unilaterally surrender one of your key bargaining chips. How to screw your country. What about UK citizens in the EU. Who gives a shit about them?

IF THE LORDS ARE THAT STUPID IT’S TIME WE GOT RID OF THE THIS ANACHRONISM AND REPLACED IT WITH AN ELECTED CHAMBER.

Feeling a tad the worse for ware. I think we helped rescue the American wine industry from financial failure.

The bus to the slopes this morning had 8 cackling fish wives on it. More rattle than a can of marbles, all jostling to get their 3 penneth in. Plenty of noise, no substance.

Lazy mornings skiing. My knees not in a very good mood and I’m picking the hertzmobile up at lunch. By lunch time the snows getting fairly had packed, not the best of conditions. 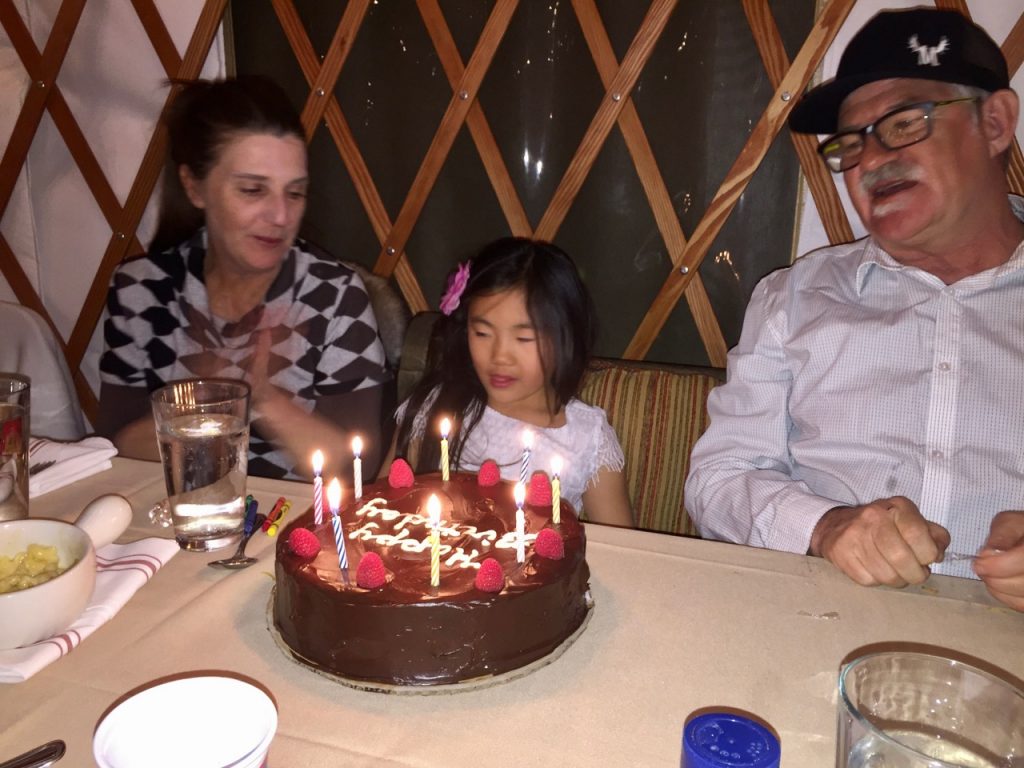 Angela’s 8th birthday at the Back 40 Grillhouse in Heber.

Great deal on the Hertzmobile, top of the range turbo charged Chevy. Move like shit off the shovel. Best of all it’s due back at 12:00 Saturday but she’s not bothered when it’s returned as long as the keys are in the drop box for Monday morning. Weekends hire for just a days rental.

In afternoon I pick Wendy up from the Christian Centre and then its a major shop, while we have the car, not forgetting an all important liquor store top up of wine and beer.

In the evening we drive down to the Back 40 Grill house in Heber for Angela’s birthday dinner with Hal, Carol, Pat and Diane. Great evening, good company, good food – definitely go there again – and awesome death by chocolate birthday cake, one of the best ever.

What do you call a doctor that fixes websites? A URLologist.

There are 10 types of people in this world: those who understand binary and those who don’t.

There are three kinds of death in this world. There’s heart death, there’s brain death, and there’s being off the network.

Computers are like air conditioners. They work fine until you start opening windows.

Not that it’s really anything to do with me, it’s not my country, but why is there such a hullabaloo when the President tries to do his duty and meet his election promise by imposing a temporary imigration ban while they figure out a better vetting process.

There’s really nothing new under the sun. It’s been done in the past:

Anarchists – After the assassination of President McKinley in 1901, his successor, Theodore Roosevelt, prohibited known anarchists

Jewish refugees – Between 1941 and 1945 Franklin D Roosevelt limited the number of German Jews to 26,000 a year amid fears that Nazis could slip in too.

Iranians – President Carter banned Iranians after the hostage crisis in 1980 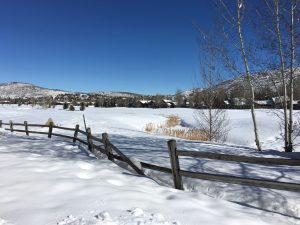 Reluctantly have a day off to give my dodgy knee a rest. At last a lie in. Saturdays are oh so busy so it not much of a loss.

As we have the car we drive over to Heber to see if we can pick up a bouncy chair for Beatrix. Wendy’s into this Christian Centre shopping.

Stop for lunch at Midway.

Then it’s yet another supermarket and free Sushi. When will the UN create a world standard supermarket layout, it’d save so much time.

In the evening we’ve got a night off from our hectic social schedule so we try and catch up on some episodes of Billions. Wendy gives it a “series to sleep through” rating. Pretty hard to follow with complex trades and too many similar looking people. You’ve several key characteristics like male, female, black, white, Asian, bald and hair colour so why can’t they select a cast to create unique, easy identified combinations of characters.

“I know we’ve been beaten down by political correctness and relativism, but does anyone have a conscience anymore?” 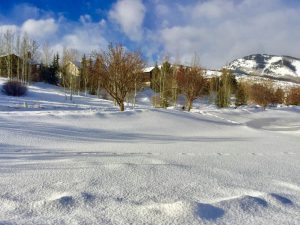 Paradise after a major dump of fresh powder.

After a day off I venture forth for a few runs. Apparently yesterday was heaving. Today it’s quite icy so stop for an early coffee to warm up and let the snow soften.

My day off and some Tens machine treatment on my knee seems to have done wonders for it.

After lunch we take Bob and Marilyn to the PCMSC apres ski party. They’ve decided to join. Some great food and the usual friendly crowd. Nice thing is they finish around 18:00 so you get the evening to relax and sleep through TV after all that wine.

Drop the Hertz mobile off – keys in the drop box. Great deal, 2.5 days hire for just one days cost, thanks to them closing at 12:00 and the dropbox..

There really is something magical to waking up to a major dump of fresh powder. All so white. All so clean. All so fresh. Can you imagine the chaos in England if we had a foot of snow overnight.

When I discovered the meaning of life, they changed it.

The IQ and the life expectancy of the average American recently passed each other in opposite directions.

I knew a transsexual guy whose only ambition is to eat, drink, and be Mary.

I put a dollar in a change machine. Nothing changed.

By and large, language is a tool for concealing the truth.

Scumboarders are out in force, the greatest health and safety threats on the mountain, a bigger risk than avalanches, and demonstrating their stupidity and knuckle dragging ignorance. They really have no consideration for others and the manners of a mute sloth. Ski patrols go out with mortars, risking their lives, in order to minimise the avalanche threat. So what about scumboarder patrols to clear the slopes of this threat to everyones safety. When will this scourge of tosspots and wankers be erased from the slopes?
This entry was posted in Uncategorized. Bookmark the permalink.