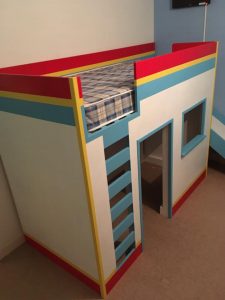 Jasper’s bed. I made it, Kurt painted it.

A great days skiing over at the Canyons on the dreamscape side of the mountain. What an awesome run Copperhead is. Really impressed with this side of The Canyons, still not too enamoured with the base area and Super condor side.

Wendy’s volunteering at the Christian Centre. Let’s hope she doesn’t catch religion as she’s not been immunised against it.

Quit just after lunch, get some browny points and meet Wendy back at the house.

Do some wine shopping. It must be the altitude and dry atmosphere up here that makes it evaporate so quickly.

Courtesy of Leon came across this web site – http://www.darwinawards.com – that salutes the improvement of the human genome by honoring those who accidentally remove themselves from it with their own stupidity…

David, 46, was sliding down an Italian ski slope one night, riding on padding that he had removed from the safety barriers at the bottom of the run. It did not occur to him that it might be dangerous to sled down the same slope from which he had stolen protective padding.

“The men had all been drinking when they tore off the padding, and ironically they careened straight into the bare barriers at the bottom of the piste (groomed slope). David died from head and chest injuries inflicted by the unpadded metal. Two of his friends survived with medical attention. Another Darwin Award candidate is still missing after he wandered away “bloodied and distressed.”

Ever wonder why scumboarders don’t follow the common sense skiers code. Well when you have scumboard INSTRUCTORS having an infestation (Scumboarders) siesta across the middle of the slope and of course setting off without checking behind them, it’s really no surprise. They should be sacked.
Thursday – cool and sunny. 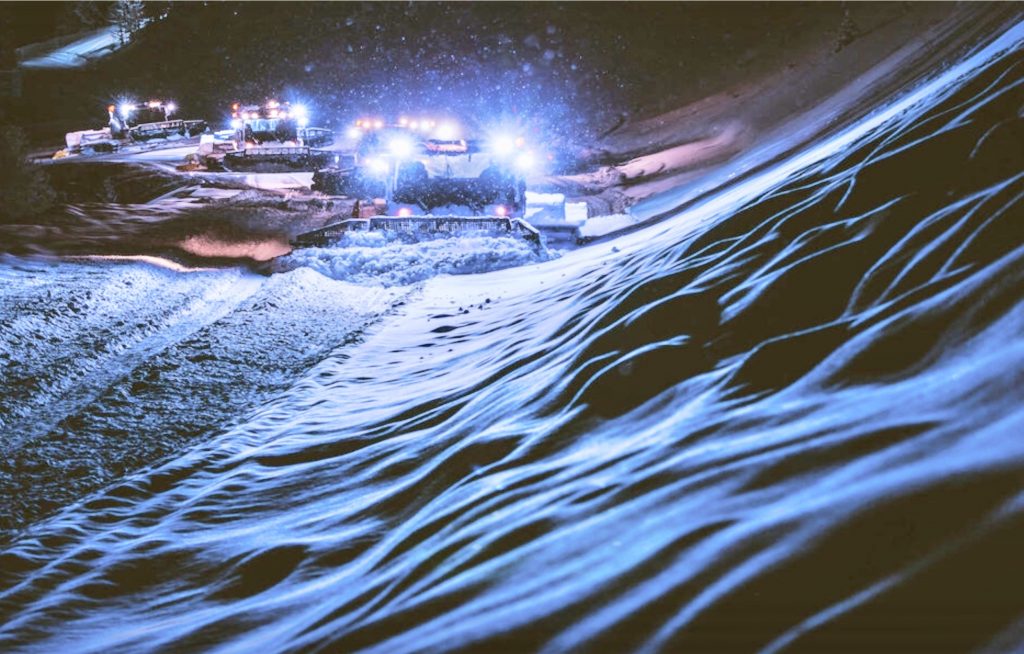 Up to Deer Valley for a days skiing. For the first time ever I was not too impressed. Groomed runs were quite skied out and so very busy.

Meet Wendy down at the Snow Park Lodge for lunch. Have a few runs after and then quit for the day.

Anna and Leon are taking us out to dinner. Try the Blind Dog but they’re booked up apart from a late table when Noddy will have well gone past Big Ears. Plan B, we decide to go to Squatters and if it’s too busy we’ll resort to plan C, go and buy Sushi at supermarket. After waiting for 20 minutes and no bus, we go for Plan D. Go home, have wine with beans on toast.

What is it with eating out in PC. Every time we try and go out it’s a total screw up. Last year there was power cut on Main Street so all restaurants were closed. We joked about going to MacDonalds as a guaranteed fall back. Turns out on the news the following day that it’s a day of revolt against Trump, even MacDonald’s was closing for the day.

Wouldn’t you think that in 21st Century the IT industry could create a better security solution than “Password Hell”. One password is insecure; unique passwords are impossible to remember; but whatever you do don’t write them down.

I know lets use Lastpass or something similar. Hang on, doesn’t that store my password in the cloud. Given recent scare stories am I going to trust that? Hmmm!

Then of course you get those arrogant t..ts (can’t really find a word strong enough) who insist on dictating to you your logon (whats wrong with allowing email address – oh I know i’ll be able to remember it) and password structure. I wouldn’t mind they’re usually to some inane website like Donkey sanctuaries, that not even the most nerdy hacker would want to penetrate.

Don’t they realise I’m lucky if I can remember what I had for breakfast, never mind 84 unique passwords.

It still amazes me how few apps or sites utilize finger print. Come on is anybody out there listening? We desperately need a simple and secure solution before my generation’s brains just melt into mush.

A days skiing with the Schmitt family, including the downhill racer Angela.

Head over to the Canyons. Work our way over to Red Pine Lodge for lunch. Then work our way back again, ge back to the Gondola just in time before it closes. A good day but oh so busy in places and quite icy.

With my track record these past two years it’s also always good to ski with a nurse.

In the evening we all have a Mexican takeaway at our place and then Angela entertains us with her repertoire. Where does she get her imagination and energy from. Her and Jasper will be like twin tornadoes.

Hasn’t our government got something more important to do than debate rescinding Trump’s invite. America can be a great friend to us and no doubt help us in BREXIT. We need all the friends we can get, because let’s face it the EU will be out to screw us at every opportunity.

Can the liberal bed wetters just get over it. He’s the democratically elected leader of one of our closest allies. Where were these sulking REMOANERS when Obama stuck his snout in our business.

The great danger to the world isn’t Donald Trump. It’s the threat by Islamists — aided and abetted by those lefty liberal stormtroopers, whose brains have dropped out, and have appeased these enemies of the west for years, and who have been sent totally wild by a US president who dares to want to defend freedom instead.

Why doesn’t everyone please calm down now?

Lazy start to the day. As it’s black out day there’s no skiing on my locals pass. 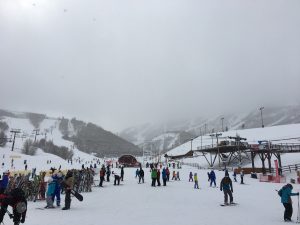 Park City mountain base on a snowy day.

Cultivate some browny points by going down Main Street with Wendy for a Merchandising fiesta. As usual we don’t buy anything, but it’s the thought that counts. Then it’s a Starbucks moment for us both, before I bravely go with her for the weekly shop. How come I start out with all these good intentions but end up loosing the will to live waiting for her. Ah it takes so long because she’s got to find everything. Hang on this is the same store she’s been coming to at least once a week. Now you see if this was a male dominated role we’d have had the UN establish a World Wide Standard for supermarket layout. End of wasted time problem and eliminates the marketing departments opportunity to screw the customer by moving things around.

in the evening we try and catch up on British TV. What with Netflix and now HBO we’re swamped.

Question times from Edinburgh. Nothing but loathsome, grabbing, whining jocks. For the FSM sake lets give them a 2nd referendum on devolution, but this time England should get a vote in whether they stay or go. I’m sure it’d be a landslide to get shut of them, if only to see less of that gobby bitch from the SNP.

Milo vs Muhammad
Sunday – cool and plenty of snow. 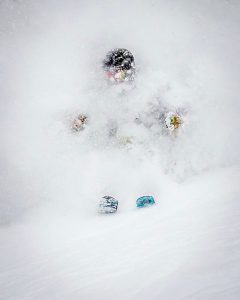 This is what it would be like up there.

Black out day again, but it not so bad as it’s snowing with that horrible wet snow. One of the busiest days of the year, atrocious weather and lousy visibility, definitely a day to be avoided. Sad for all those who have just come up for Presidents weekend.

We tootle off down to the Tangier Outlets centre to take Wendy for some retail therapy. Don’t we just love the Columbia store. Every year they pack in more merchandise and less room for the customers. At this rate there’ll be no room for the customers next year. I wonder if the geniuses in the customer exploitation and piracy department (marketing) will notice?

Christian center, where Wendy volunteers, is amazing. Tons of food from supermarkets, local businesses and Starbucks, toys and household goods. Everyone is so friendly and helpful. A wonderful example of the beneficial efforts of religion.

Wendy’s been invited to the weekly prayer meeting, but she’s given that a pass. But they’re cool with that. Thankfully she’s not caught religion despite not having been immunised.

Religion would be wonderful if there wasn’t a God involved.

So I stroll into the mens toilet in the Outlets Centre. The Mecca and inner sanctum of retail therapy and marketing. Have I wandered into the ladies I ask myself as lo and behold the high priest of marketing have screwed up with their all important message. How so? Well all the photos / adverts are of womens clothes. It wouldn’t have been so bad if it had been of tasty sexy lingerie.
Monday – cool and snowy. 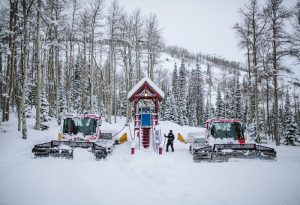 Some fresh snow overnight. Lazy mornings skiing. Take it easy as it’s oh so busy, being Presidents Day. And no despite the general hate and loathing for Trump they haven’t cancelled it for the next four years. It seems a peculiarly American attitude in that they always hate or think the current Presidents an idiot. What’s more even if they voted for him.

European leaders should heed the clarion call from someone who has intimate first-hand knowledge of Islam – the Somalian-born former Dutch MP Ayaan Hirsi Ali, forced to flee to the US because of threats from Muslims who objected to her caustic criticism of Islam: “Islam is not a religion of peace. It’s a political theory of conquest that seeks domination by any means it can. Every accommodation of Muslim demands leads to a sense of euphoria and a conviction that Allah is on their side. They see every act of appeasement as an invitation to make fresh demands.” (March 21, 2009) Europe will ignore her dire diagnosis at its peril. Unless it faces up to the bleak realities confronting it and tailors its policies accordingly, the consequences will be, indeed, grim… and gory.

SNAFU Award – System Normal All F..ked Up
All this extra well being in my life, with me trying to ride my virtual surfboard on the wave of life, has me needing some balance. The Rants partly help but there’s such crap out there that at least once a blog I will probably need to highlight the SNAFU award for the incompetents who most deserve feeding to the lions on a Saturday afternoon in a Flavian amphitheatre me thinks.

I’m sure software developers and web designers will lead the way in these daily attempts to boil my blood. I’m positive BBC iPlayer software department will deserve an annual award.

Let’s start as we mean to go on with recognition of the BBC’s very own iPlayer software development team for their leading edge SNAFU software. Runner up goes to ITV player. Why don’t they both just close their IT departments and sub-contract it to Netflix or HBO who seem to have a credible solution.

More fresh snow overnight. Not a lot but it all helps. 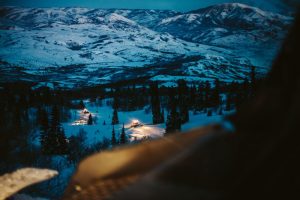 It’s howling a gale at the top. 6 or more lifts and the gondola are closed as it’s too windy. Expect they may close the others soon so keep on the runs that you can get back down to base on without being trapped.

Carol pops round in the evening with our Costco supplies.

My blog gets promoted on the Home Exchange site – https://blog.homeexchange.com/blog/exchange-tips/experienced-approach-to-home-exchange/5637/
– not had any death threats, yet.

More cray Utah laws
Individuals may not possess beer in containers larger than two liters unless they are a retailer.

Boxing matches that allow biting are not allowed.

It is illegal to cause a catastrophe.

You must have identification to enter a convienence store after dark.

Women may not swear.