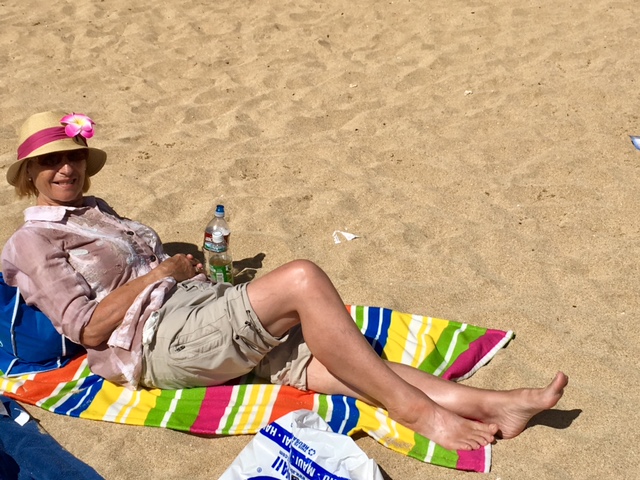 Lazy do nothing day.

Drive down to Kapolei for a decent supermarket. Do our last shop and then back down the Farrington Highway. 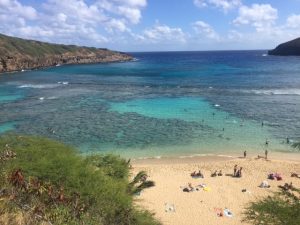 Don’t you just love how the marketing machine of the mighty dollar cholesterol cathedrals panders to the blobbies. Never more so than with Baskin Robbins and their latest perversion Turkey ice cream pie. Ready for thanksgiving no doubt.

I give up this week. The drive down the Farrington Highway is enough to make anyone burn their surfboard of life. Makes me feel like a Dalek whose plan to conquer the world was frustrated by a staircase.

Mother superior and sister Margaret are in their car in Dublin when a bunch of rowdy drunks pull up alongside of them.
“Hey, show us your chest, ye bloody penguins!” shouts one of the drunks.
The Mother Superior turns to Sister Margaret, “I don’t think they know who we are. Show them your cross.”
So Sister Mary Margaret rolls down her window and shouts, “Screw off ye little fookin’ wankers, before I come over there and rip yer nuts off!”
Sister Mary Margaret looks back at the Mother Superior and asks, “Was that cross enough?!”

Q.What did the traffic light say when it stayed on red? A.”You would be red too if you had to change in front of everyone!”

Traffic lights on my road have broken. No change there.

Was never any good at hitch hiking. I went early to avoid the traffic.

I was sitting at a traffic light yesterday, minding my own business patiently waiting for it to turn green even though there was no on-coming traffic. A carload of bearded, young, loud Muslims, shouting Anti-American Slogans, with a half-burned American flag duct-taped on the side of their car and a “Remember 9-11″ slogan spray painted on the side, was stopped next to me.

Out of nowhere, an 18-wheeler came speeding through the intersection and ran directly over their car, crushing it completely and killing everyone in it.
For several minutes I sat in my car stunned, thinking to myself, “man…that could have been me!”

So today, bright and early, I went out and got a job as a truck driver. 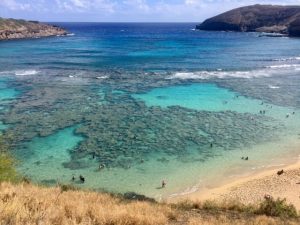 Off down to Hanauma Bay for some beach time and snorkelling. It’s a nature reserve. All very pleasant and very safe snorkelling. I’ve only got my mask and snorkel, no fins, but I cope. Manage to see some pretty fish and the odd bit of coral.

We can only manage an hour lazing in the sun before we have to escape. Sunning ourselves on the beach really isn’t our thing.

Then it’s more pantomime time from Fox, MSNBC and CNN. Fox may be crazy but at least they have a nice piece of eye candy in Megan Kelly and they make it more interesting and entertaining than that rabid bitch on MSNBC. They’re all so bias that they’d make the Klu Klux Klan look like black baptists by comparison.

Who are these numpties who drive the Farrington Highway every day. 12 miles with 30 sets of traffic light. 12 mile of shear hell and frustration every day. 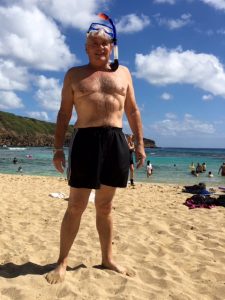 Posing for a Bond movie.

1 Get rid of the contra-flow.

2 Get rid of at least half of the traffic lights, they are the major cause of the gridlock.

3 Of the remaining traffic lights double the time interval between activation from side roads and halve the time they allow side roads to flow.

4 Sack the stupid politicians who are responsible for this lack of even a skerrick of common sense.

My only conclusion is that these daily commuters must be retards to put up with it. 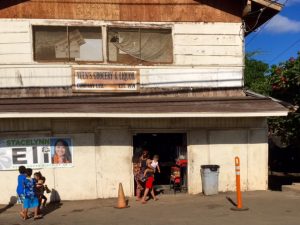 Drive down to do a plantation tour. So well hidden you only find it if you have eyes in the back of your head. Not very busy and when you look around at the desolation you can understand why. Pass, not going to spend $13 each to have a tour around someone’s allotment.

Abandon plans and return back down the highway from hell for a lazy afternoon. 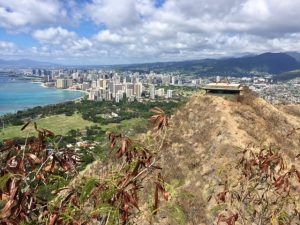 Head off to downtown Honolulu. I drop Wendy off at the Ala Moana shopping mall where she’s going to take our credit cards for a leisurely stroll around the 7th largest mall and largest outdoor mall in America. Hopefully they’ll not get to see daylight.

Meanwhile I drive down to the Diamond head state park for an ascent up Diamond head. The suns blistering hot and it’s 83 F. Of course in true English fashion it’s mad dogs time. Anyway make it, all 600 feet to the top and end up wetter than a water hogs backside. Stunning views and quite a pleasant walk, certainly does my twice broken femur good. Quite pleased takes just 32 minutes up and 20 minutes back down. I use a young couple as my pace makers. They reckon to allow 1.5 to 2 hours. 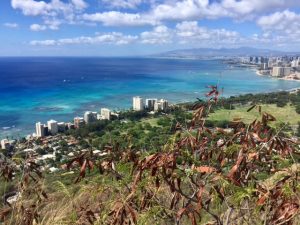 Back to the mall to pick Wendy up. And by way of a change we nip into Starbucks. Wendy meanwhile treats herself to a lavish ice cream – $7 – she’s really getting into this frittering the kids inheritance away.

Call in at the Apple Store. How could I resist it, they’ve none of the new MacBook Pro’s with touch bar on display or available.

Then it’s back to the pantomime, beer, wine and pack ready for our next adventure. Best of all a whole week of no driving.

You know what the problem is with American politics and the media? They can’t tie a tie properly. Most of them have a tie that so skewed to one side it looks like a drunk Lowry stick man. It’s not difficult to tie a decent knot but these numpties haven’t a clue. No doubt they have trouble tying their shoelaces too. Sure sign of lying sleaze balls. 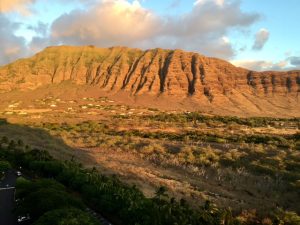 View from our home exchange.

My final challenge for our Honolulu visit is to find something nice to say about the Farrington Highway – our daily nightmare from hell for the past 2 weeks.

The beaches and sea along the highway are quite spectacular and not crowded. 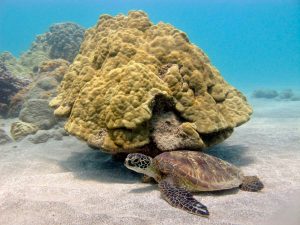 A turtle I didn’t see.

I could tell the traffic was bad when my Sat Nav said “Are we nearly there yet?”

Tried driving in Cairo once, it was chaos. Noise everywhere. Full of tooting car men.

A lorry load of pepper mills has crashed.  Traffic has ground to a halt.

Went to the National Traffic Wardens’ Association dinner last night.  It was an all ticket event.

Got a new job as a traffic warden, and started basic training.  Thought to myself, “that’s just the ticket.”