Well I never thought I’d say it but after 4 weeks of desert living it’s a real treat to see clouds. 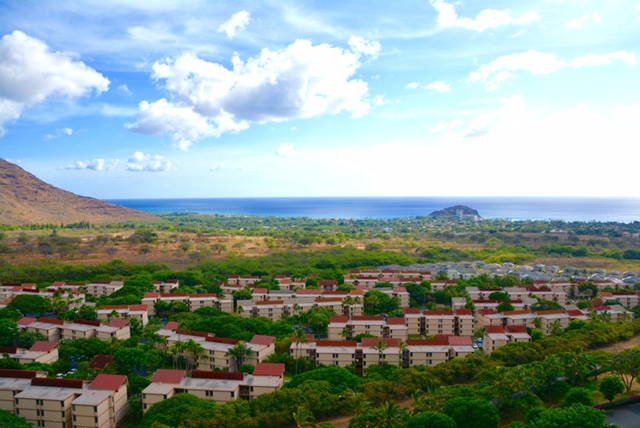 View from our balcony.

Our lovely new home exchange for the next two weeks is on the 19th floor of the Makaha Towers with floor to ceiling glass windows and doors in the lounge and bedroom looking out over the valley and sea. Awesome views. The building looks a bit dated from the outside but from inside our one bedroom condo is ideal, modern, well equipped, clean and best of all good wifi. After our 3,500 square foot home in the desert, where we wore out two pairs of shoes just shuffling around the house, this place is nice and compact and the space flows well. There’s a narrow balcony but the idea seems to be open your patio doors if you want to sunbathe. 19 floors below is a full sized pool, sun lounger – not a German beach towel in sight, mind you there’s probably a whole chapter in the Mein Kampf rule book for this place on pool don’ts. 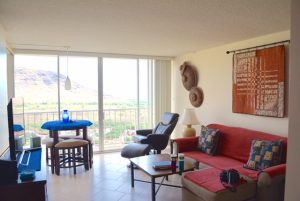 Lazy day after our travels. Pop into the office for a parking permit, AKA, money milking scheme.

Take a drive up the coast. Call in at the Kaneana Cave. Where there’s fresh fruit and vegetables laid out. It seems it’s to feed and appease the local gods. Apparently this cave was used by the Shark Man to store his victims on a slimy stone until he was hungry.

We have a chat with a couple of young girls, who despite being well educated and seeming intelligent, tell us they sort of believe in such pagan superstitions. They also tell us that Hawaiians resented being drafted into the USA as the 50th state. Seems that there’s still quite a lot of resentment and prejudice against Caucasians – easily identified as anyone who is not obese. 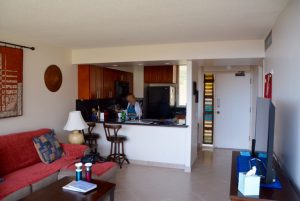 Get back to a missive on our door from the TSA gestapo who pose as security guards. Seems we’ve committed a heinous crime and are in violation of one of the many rules, in their no doubt 6″ thick rule book. “Failure to return parking pass”. Oh you actually mean “Sorry we screwed up and gave you the wrong pass, could you please pop into the office to swap it out”. I guessed when we arrived and saw some of their anal retentive rules like park inward; don’t cross the white lines when parked, that this place was going to be just one big TSA theme park of rules, regulations and unrelenting trivia from a band of TSA rejects. 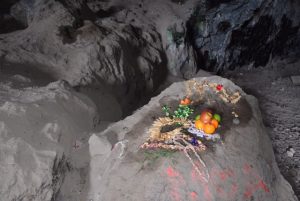 Peace offering to the gods.

Well I thought Orlando was an obesity magnet, and your average cruise was an adipose tissue factory, but Hawaii is worse. The mountains of adipose tissue waddling down the streets – they’re the ultra fit ones, the athletes of Hawaiian society, the rest are in electric wobble carts – is enough to turn your stomach and make you dash to the local hospital to have your gob sewn up for life.

These folks are so fat that all that blubber acts like a fender so they can’t even sit next to the table, why they’re that far away that by the time a fork of hot food gets to their mouth it’s gone cold.

In 2009, the Hawaii Department of Health pointed to the alarming statistic that Native Hawaiians had a prevalence rate of 69.6% for being overweight. Whilst the obesity rate for Native Hawaiian or Other Pacific Islander adults (over 30 BMI) in the US in 2010 was 43.5%. 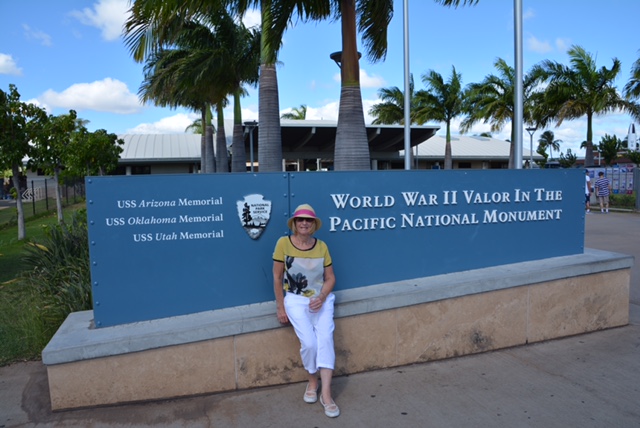 Another day and another violation posted on our door knob. This time it’s a stark parking violation. What it should have actually read was “we told you wrong yesterday, would you please park in the upper parking lot”. On the last day I’m going to sort out these anal retentives and give them a fiesta of violations, we’ll hang towels out on the balcony; park in the bottom lot; reveres the car in; park diagonally over 3 parking spaces; serenade Wendy from the ground floor when Noddy’s well past Big Ears; drive clockwise around the towers. That should give them severe hand cramp writing all violation tickets out. 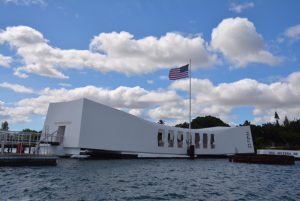 Up early and out for a trip to the Pearl Harbor memorial – yes I know that’s not spelt correctly but consider how bad it would be if we stuck with the Hawaiian alphabet of the 5 vowels and just 7 consonants. Could that be a reason why the language is withering.

The drive down Farrington highway is a nightmare. Just too many traffic lights.

Pearl Harbor memorial is excellent, as always for anything run by the National parks. Film on that fateful day followed by boat trip out to the USS Arizona memorial to over 2,000 lives lost when the nips launched that heinous attack. A very sombre and reflective visit. 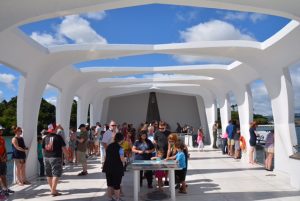 Inside the USS Arizona memorial.

Then we decide that it would be a good idea to visit Wholefoods market for a decent supermarket. First one doesn’t even exist – that made my surfboard of life get a tad slippy. Finally find the 2nd one. Fortunately there’s a Starbucks next door. Pop in for a coffee to help my grip and balance on my virtual surfboard on the drive home. Decide to splash out on a pack of Kona coffee. I know it’s an expensive coffee but when she rings up the price – $25 – I take a nose dive over the bow of my virtual surfboard. Is there a defibrillator anywhere near.

Drive home along H1 and H201 – their freeways. Nearly as bad as LA. Then we have the Farrington highway to cope with. A nightmare of traffic lights and a superb gridlock creation scheme they call “contra flow”. Stupidity 15 : common sense 0. 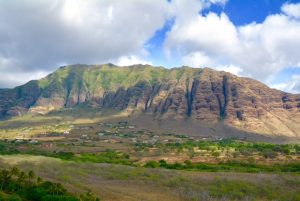 View from our balcony.

Decide to watch “Pearl Harbor”. Not available on Netflix, so we compromise and watch “Tora, Tora, Tora”. Don’t think we’ve seen it before. Made in the 1960’s, so certainly beyond the reach of any of our memory synapses, but unlike the sop, romance and piffling side tracks of “Pearl Harbor”, this is much more factual. Despite its age it has some great attack scenes. Really enjoyable and helps put it all into context.

Classic of SNAFU of that fateful day has to be:

Radar operator “Lieutenant, there’s a large detachment of planes coming in from the North.”

Lieutenant “Well, don’t worry about it. They’ll be ours.”

Yet another awesome National Park memorial at Pearl Harbor. As always so well done and respectful. Tribute to honor all the 2,000+ who lost their lives on that fateful day. December 7th 1941, a date which will live in infamy. 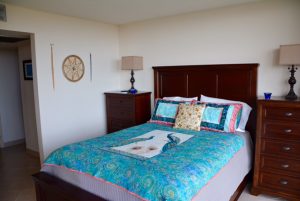 Donald Trump is a builder, he’s going to use the vast resources of the United States government to build a wall to protect our citizens, build a strong middle class, and most importantly build a machine to cure male pattern baldness.

Donald Trump loves the “poorly educated” so much, that when he’s president there will be more of them than ever.

The greatest trick the devil ever pulled was to paint a man orange and convince the world he was going to be president of America!

A lazy day after all that driving yesterday. Traffic’s the main problem with this place. We’re only about 30 miles from Honolulu but the Farrington highway is a night mare at rush hour and the few freeways they have aren’t much better. 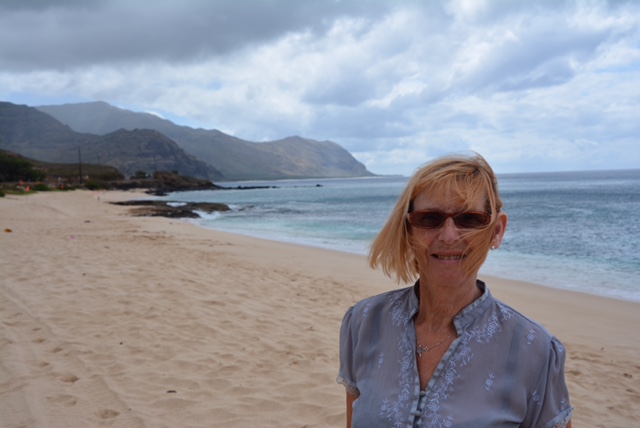 Drive down to a local Beach. Visit the remains of an Hawaiian temple and then have a walk along the Beach. Watch a few intrepid surfers. It certainly is an island paradise and our end of the island is very much the locals end. Plenty of ram shackled housing. Lots of vagrants dossing out on the beach, it seems a way of life and unemployment is high. Reminds us very much of your average little chicken shit Caribbean island. 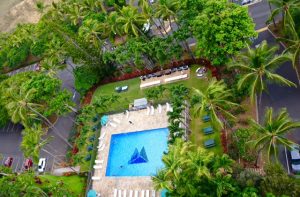 Followed by the inevitable Starbucks treat.

Get our early evening pantomime fix with a mixture of Fox, MSNBC and CNN. Must be masochists. As for that repitious rabid reviling bitch Rachel Maddow, she must think all Americans are so thick that they need to hear the same bile 3 or 4 times for it to really sink in. Cut the pandering repetition and her raving 60 minutes could be distilled down to 5 minutes. What a nightmare waking up with that velociraptor on your pillow would be. Oh I forgot, I’m safe, she’s a lesbian – what a surprise!

How beautiful are the green serrated cliffs around Hawaii, all covered in lush vegetation. I could look at them for hours. Awesome, you have to see them to believe them and appreciate the power of water on these volcanic mountains. 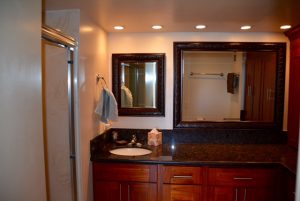 What is Bill’s definition of safe sex? When Hillary is out of town.

Did you see the Jim Carrey movie about the Benghazi Hearings? It’s called “Liar Liar Pantsuit on Fire”.

Donald Trump and Hillary Clinton are on a plane. The plane crashed. Who survived? America

What movie does Hillary watch when she’s in a bad mood? Kill Bill.

What decision do Americans have to make in November? A “Crooked Dick” or a “Crooked Chick”.

Pat Condell, the King of Ranters, on Americas moment of truth:

Thursday – hot, cloudy and some rain. 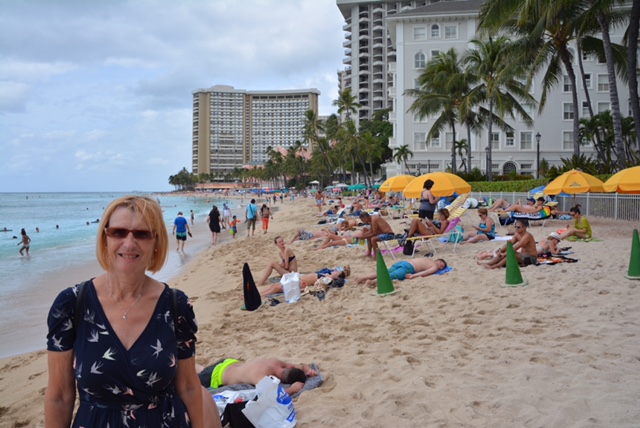 Miracles, VPS have just paid me for my consultancy after much chasing on my part. It’s an omen. Watch the long awaited Apple announcement on MacBooks. Want one – 13″ MacBook Pro fully specked out. Need one, mines well past its retire by date. At least now I’ll be able to afford one. 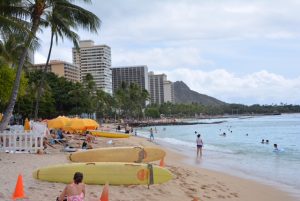 Drive down to Honolulu for the Waikiki Trolley bus tour of Honolulu. Decide to pick up the trolley in China town. What a dump. It’s grey, miserable and raining, but at least it’s warm. Spend an hour trying to find parking. End up having to each sell a pint of blood and a kidney to pay the parking fee.

Trolley is a great way to see Honolulu. Once we get out of china town the place improves dramatically although spoilt by so many high rise buildings.

Get off at the world famous Waikiki Beach, have a wander around and enjoy watching the surfing and the eye candy on the beach. Busy and touristy but much better and more civilised than expected. Lash out on lunch at the beachside at the exclusive Moana Surfrider hotel – no complaints! 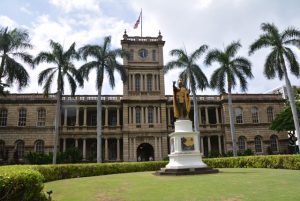 Hawaiian King in the days before they were swallowed by the USA.

Back on the trolley to finish our tour.

On our way home call in at a civilised Safeway for some vital supplies. No more 3rd world supermarkets. We thought California was expensive but in Hawaii I think the decimal point is always right shifted. Battle our way back through the traffic. Not too bad tonight. 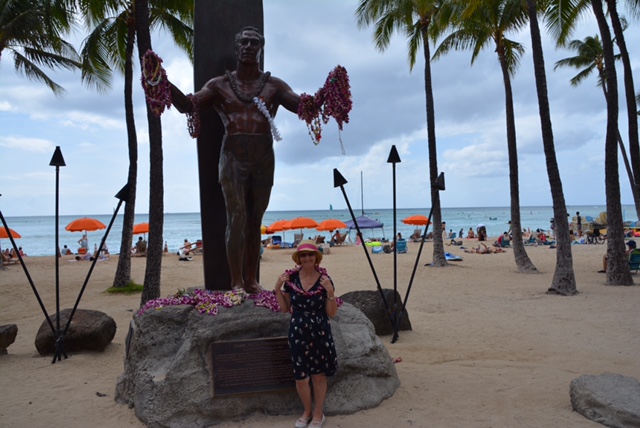 Lucky to be watching the real experts ride the surf. They make it look so easy. Reminds me it’s just a mere 48 years since I last tried it in Cornwall when I met Wendy. Now she tells me I’m too old.

Looks like I’ll have to stick to riding the virtual surfboard on the wave of live. 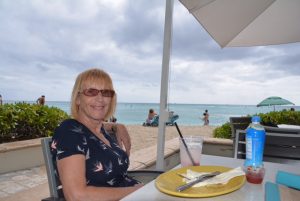 Expensive lunch on the beach.

Now I know he’s a nut job. If ever there was anything to convince me he’s crazier than a dog in a hubcap factory, then if this bunch of retarded red necks and fruitcakes in the NRA backing him, is it. Don­ald Trump, who has seen the Re­pub­li­can es­tab­lish­ment’s sup­port for his pres­i­den­tial can­di­dacy de­te­ri­o­rate in re­cent weeks, has found a stal­wart in one con­ser­v­a­tive in­sti­tu­tion: the Na­tional Ri­fle As­so­ci­a­tion. 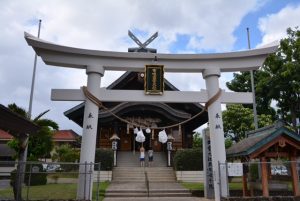 The group has spent more than $26.8 mil­lion on ads pro­mot­ing Mr. Trump and at­tack­ing De­mo­c­ra­tic ri­val Hillary Clin­ton. That’s more than twice what it spent at this point in the 2012 elec­tion and more than any other out­side group back­ing the GOP ticket in 2016.
This entry was posted in Uncategorized. Bookmark the permalink.