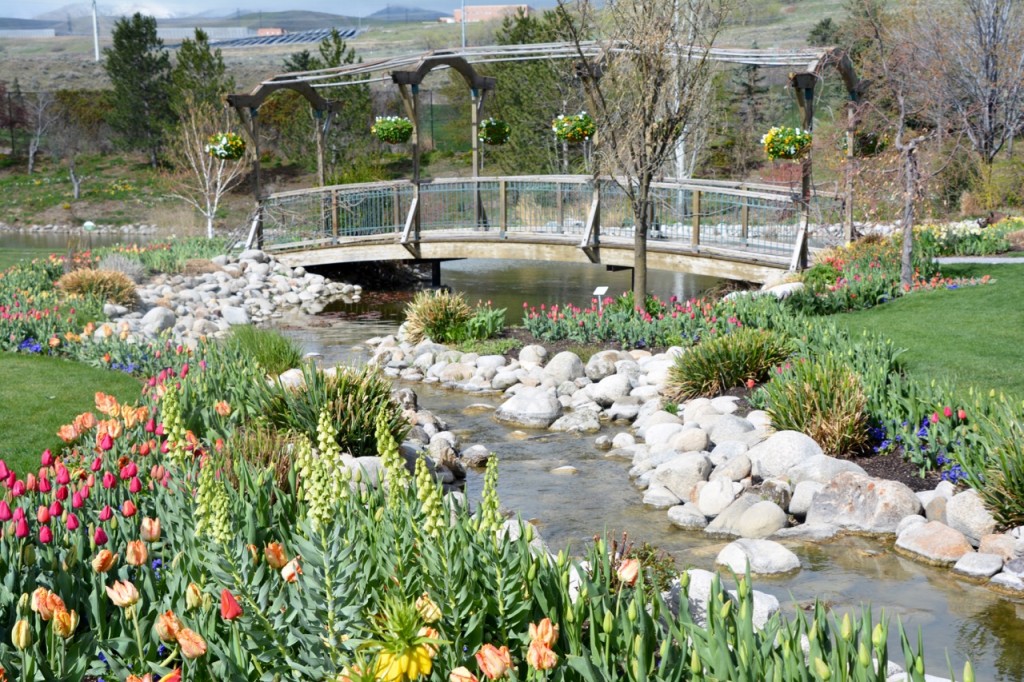 Up out early and drive down to Thanksgiving Point to visit the Tulip Festival, it’s a geriatric thing. Quite impressive and lovely gardens but nowhere near as good as the Dutch Tulip Festival. 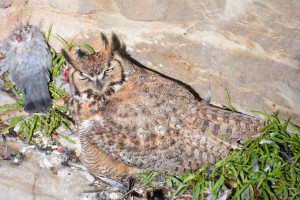 Owl with his lunch on the side.

Then we visit the Country Farm, Dinosaur Museum and Museum of Curiosity, With the later three we really needed to rent a rug rat as they’re clearly aimed at kids. But we managed to justify it as exploring potential for Jasper. He’d love the Farm and the museum of curiosity. You could easily spend a day here.

The museums are teaming with heavily pregnant Mormon women, usually with 4 or 5 rug rats in tow. I’m amazed there isn’t a midwife on duty.

After a Starbucks we drive about a hundred miles down to Price, where we’re staying over night. 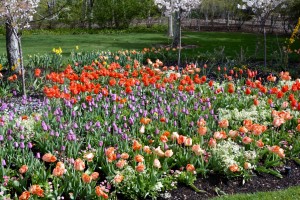 Price is a real one horse Mormon town wide streets so that all the wives can walk side by side with their husbands. Actually most Mormon town are laid out with streets wide enough that an Ox cart can be turned around. A common problem in this day and age.

Our Quality Inn hotel was pretty good, although the guy at reception needed photo Id as usual. Handed him my 50 year old paper licence along with loose passport photo in the plastic case to turn it into photo Id. He then spent the next 5 minutes examining it. In the end I had to ask for it back before he wore all the ink of it. Despite the detailed, microscopic inspection it never seemed to occur to him that the picture was just loose and it could have been anyones, but so far, apart from one border guard it Arizona, it’s always passed muster as a valid photo Id. A very disconcerting and unfriendly welcome. 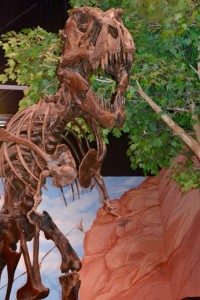 We review Trip Advisor and select on a locals restaurant – Farlainos Cafe. It had pretty good reviews, where all the locals dine. What a disaster this place was. Do you sell beer. Sorry no – not unusual in Mormon country – but to be fair the waitress did offer to take our order and deliver the food to the bar next door – neat.

They passed our soup of the day test, in so far as they knew what it was, but they’d run out. Not a good sign and remind us to add “run out of soup or coffee” as another acid test – see below. 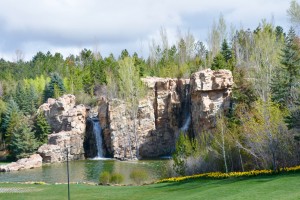 Gardens with a little waterfall.

It took them 45 minutes to prepare two simple meals, we were ready to hand out the 5 minute ultimatum. “If it’s not on this table 5 minutes from now we’re walking out that door. By the time it arrived I needed another shave and my stomach was convinced Jihadi Johnny had modified my throat with his carving knife.

Thankfully our waitress explained why the delay. “You see we’ve only got room for 8 on the grill!”. Oh well that’s alright then, who give a rats arse about keeping customers waiting. Heaven forbid you should get a bigger grill or limit the number of tables. 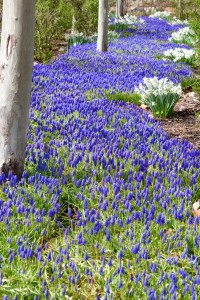 Not tulips but hyacinths I think. Gorgeous colour.

Then her indoors, who is normally so calm and placid, kicked off when her chicken breast salad arrived. The chicken, what little there was of it, was just brown gristly bits and bore more resemblance to diced sausage. I tell you this poor chicken must have had some mangey breasts when it was alive. To be fair the waitress offered to replace it and provided an anorexic breaded chicken on top of what, even by my standards, was a gruesome looking salad – I could have done better and that’s a dire criticism.

I have to say my meal, the house speciality, a smothered burrito of some sort, was excellent.

Moral of that story don’t trust Trip Advisor. At least now they have a Terrible star.

Three questions to ask in any restaurant before ordering food: 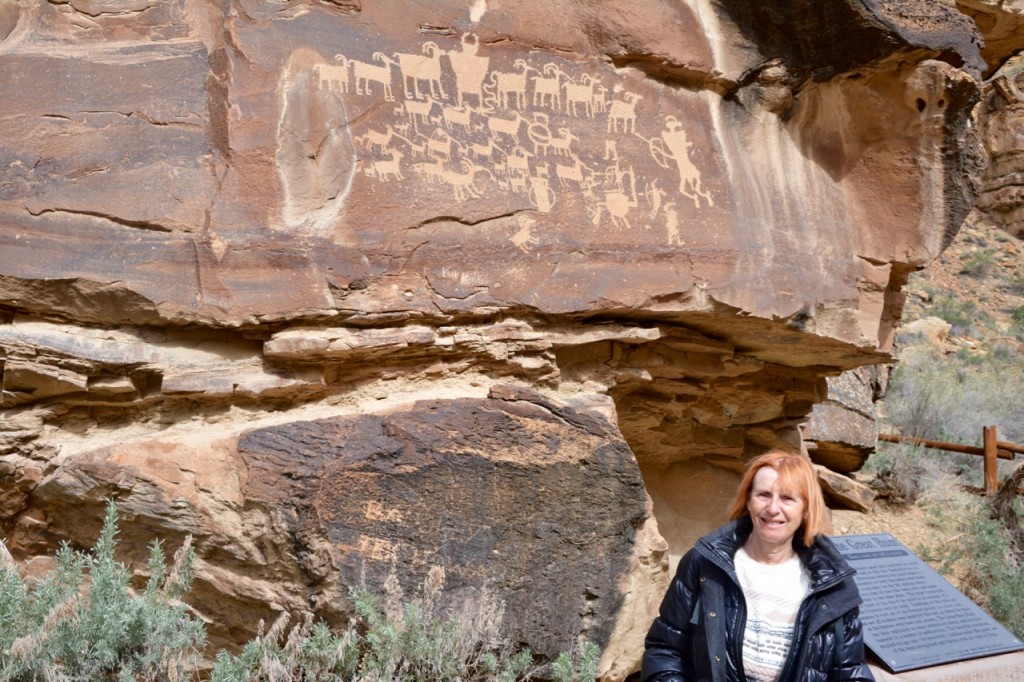 Our great hunt to get a picture of Wendy at the famous “Great Hunt” petroglyph.

Up early for a “continental Breakfast”. Now you’re probably thinking croissants, rolls, cheese, ham and jam. No this isn’t the the EU, instead it’s cereal, yoghurt, some cakes and waffles, always my favourite. 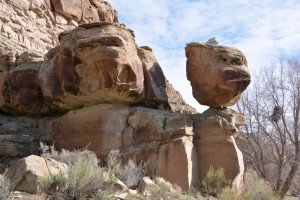 Drive down 9 Mile Canyon. Well it’s really 46 mile canyon but gas (petrols) cheap so who’s really bothered. The scenery is awesome but finding the petroglyphs by mile marker isn’t easy. Especially as the mile markers on the road are out by 0.9 miles, but hey ho who cares that tourists are wandering around for hours with binoculars trying to find these petroglyphs.

Find the main petroglyphs. Pretty impressive – see pictures. Even without the petroglyphs this canyon is spectacular and well worth the trip. 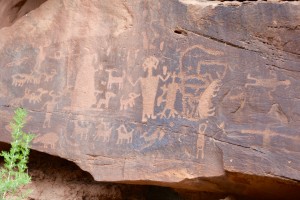 Drive back up a “backcountry road” which seems to be a euphemism for well compacted dirt track as the black top runs out after 3 miles. Then spend 10 miles on the dirt track before black top service is resumed. These places are pretty resolute only see a handful of cars all morning and can you believe it no telephone signal. 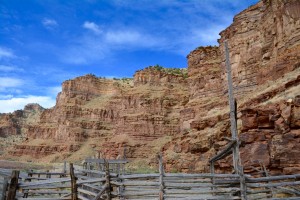 Hal drops Angela off for her tea as we look after her until Carol finishes work. Angela’s easily fed and amused just plonk her down in front of the iPad, like Jasper, and not a peep out of her.

Say you are an older senior citizen and can no longer take care of yourself and the government says there is no Nursing Home care available for you. So, what do you do?

You opt for Medicare Plan G. 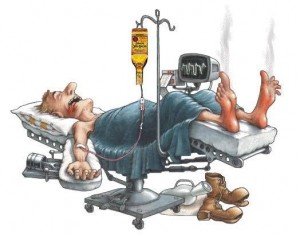 The plan gives anyone 75 or older a gun (Plan G) and one bullet. You are allowed to shoot one worthless politician. This means you will be sent to prison for the rest of your life where you will receive three meals a day, a roof over your head, central heating and air conditioning, cable TV, a library, and all the Health Care you need. Need new teeth? No problem. Need glasses? That’s great. Need a hearing aid, new hip, knees, kidney, lungs, sex change, or heart? They are all covered!
As an added bonus, your kids can come and visit you at least as often as they do now!

And, who will be paying for all of this? The same government that just told you they can’t afford for you to go into a nursing home. And you will get rid of a useless politician while you are at it. And now, because you are a prisoner, you don’t have to pay any more income taxes!

Is this a great country or what? Now that I’ve solved your senior financial plan, enjoy the rest of your week! 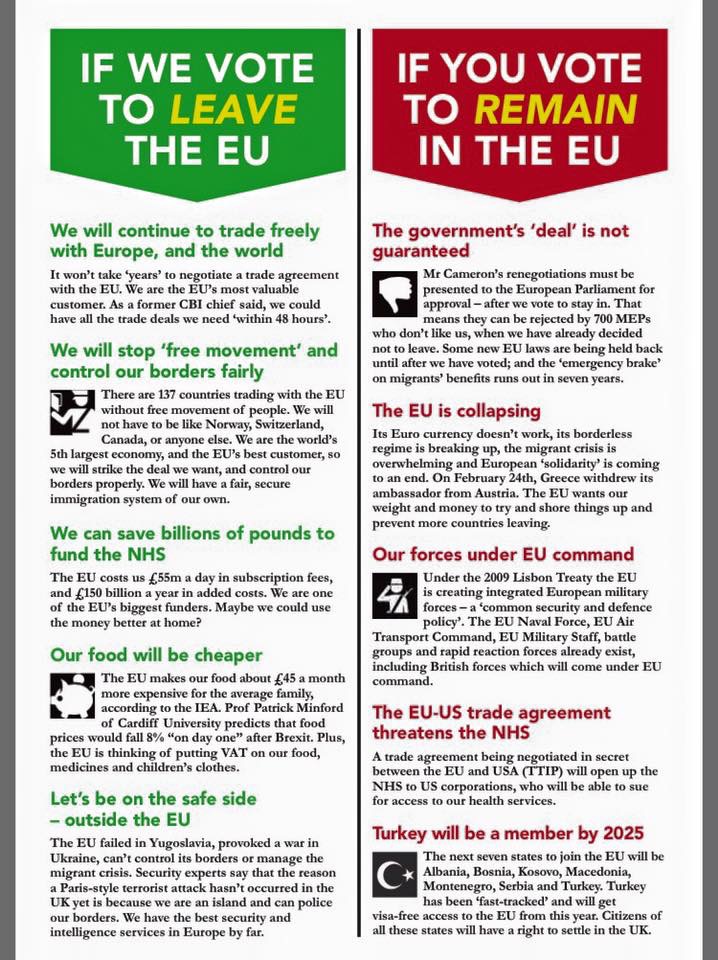 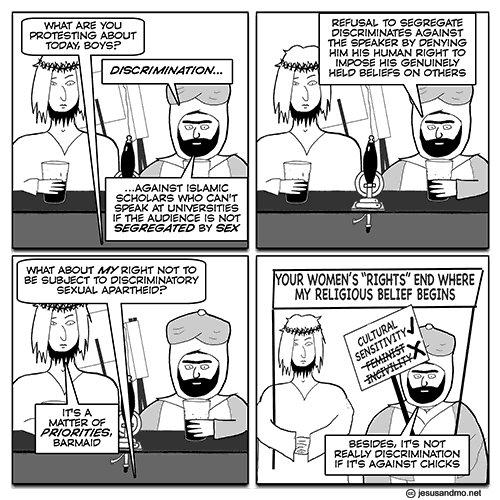 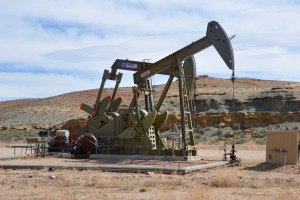 Nodding donkey on the back country road out of 9 Mile Canyon.

Spend most of the day clearing up and packing apart from nipping down to Kimble junction for a last minute shop. Unbelievable our business class flights tomorrow have a baggage allowance of twice the normal 23Kg. I’m almost tempted to go to Walmart and buy two big suitcases and fill them with stones just to take advantage of it.

In the evening the Schmitts come round for a farewell family dinner, which mainly consist of our left overs. A great evening with great company. We’ll miss them.

Well I’d like to think it was another April fools joke but no it’s true. Yes, a remote controlled foot spa (bidet); emergency button; auto seat raise; temperature controlled; oscillating rear washing nozzle; turbo cleansing with high pressure rear wash. Includes a 4 minute video explaining all the loony functions. Every home and refugee tent should have one. Could be a neat way to fritter away our 0.7% of GDP on foreign aid.

Bill Maher gets into a debate on why Islam is more Violent than Christianity: 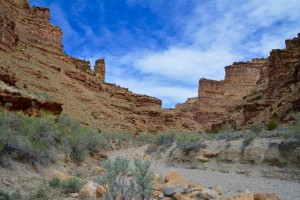 Lazy morning. Drop off Carols things she lent us and any food we have left over – waste not, want not. Nip up to the hospital to get copies of my invoices, then it’s coffees and Internet. Seems strange not having to leave until 13:00. We’re so used to getting up at the crack o sparrows.

Say goodbye to Park City until next February. Quite sad. At least I’ve got plenty of time to get fit for skiing. 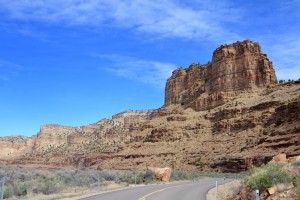 Check in is painless, but as usual TSA is just the usual palaver. Yes, we’re pre-checked but because I’ve got a piece of Meccano in my leg I have to go through the scanners and be groped, sadly not by a fit young piece of eye candy. 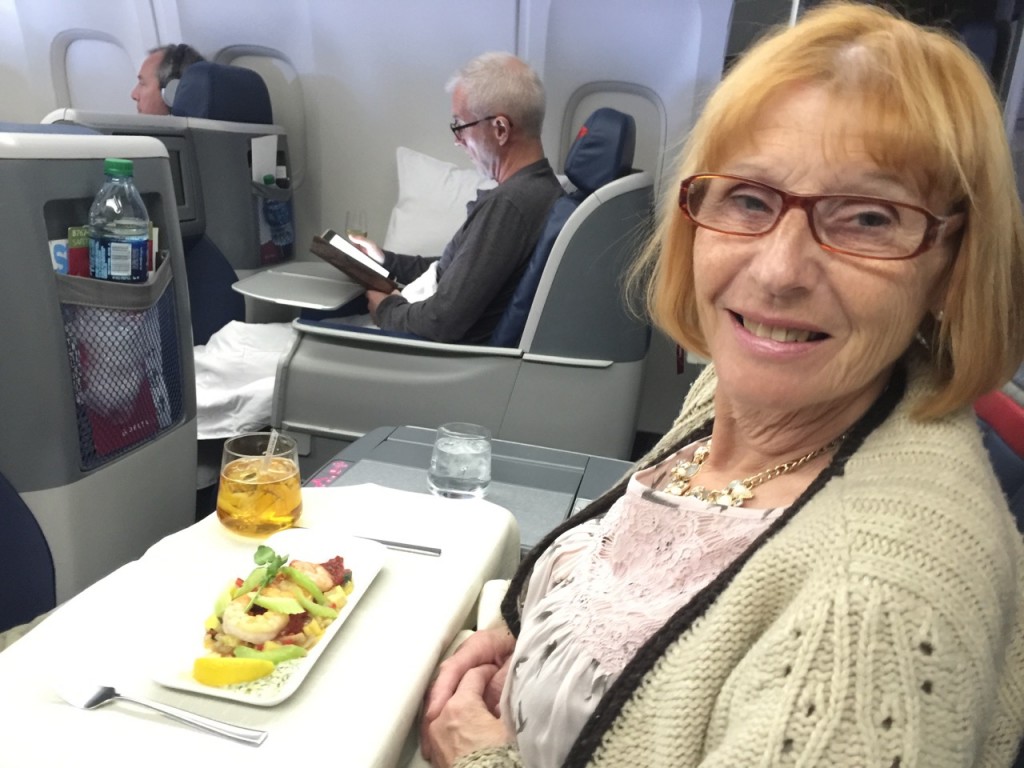 We have Delta lounge access. I should think so at these prices. Wendy devastated as they don’t have any brandy. Considering there’s frequent flight to Paris from here you’d think they would. 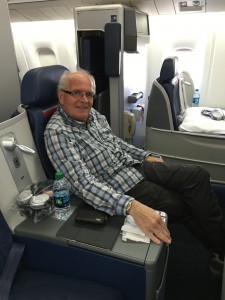 It’s ok all this business class luxury but being at the sharp end of the plane means you get all the riff raff and huddled masses shuffling past, swinging their knapsacks and steamer trunks and ruffling your free newspaper as they glare at your 2nd glass of champagne, whilst contemplating joining the communist party, headed of course by Jeremy Corbyn.

Well this has to be the experience of a lifetime, not quite up to virgin upper class standards, but to experience good customer service delivered with a genuine friendly smile from the sycophantic French cabin crew had to be worth every penny of the £9,000+ ticket price I’m not paying for.

Foods pretty good, a tad on the haute cuisine side but best of all theres cheese and biscuits with port of course. 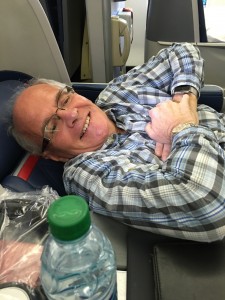 It seems that terrorists aren’t allowed in business class as we’re provided with real knifes and cocktail stirrers like a sharp harpoon, complete with barbs on it.

Ah it seems like there’s a 2nd wifi entertainment system which can stream the Martian to my iPad. That’s the good news, bad news is I have to download an app, which takes nearly an hour, so I’ll struggle to see the whole film before we land.

Well it’s been a very relaxing and comfortable flight, so much better than cattle class, but way too expensive even if we are frittering away the kids inheritance. Certainly not worth braking my femur for. 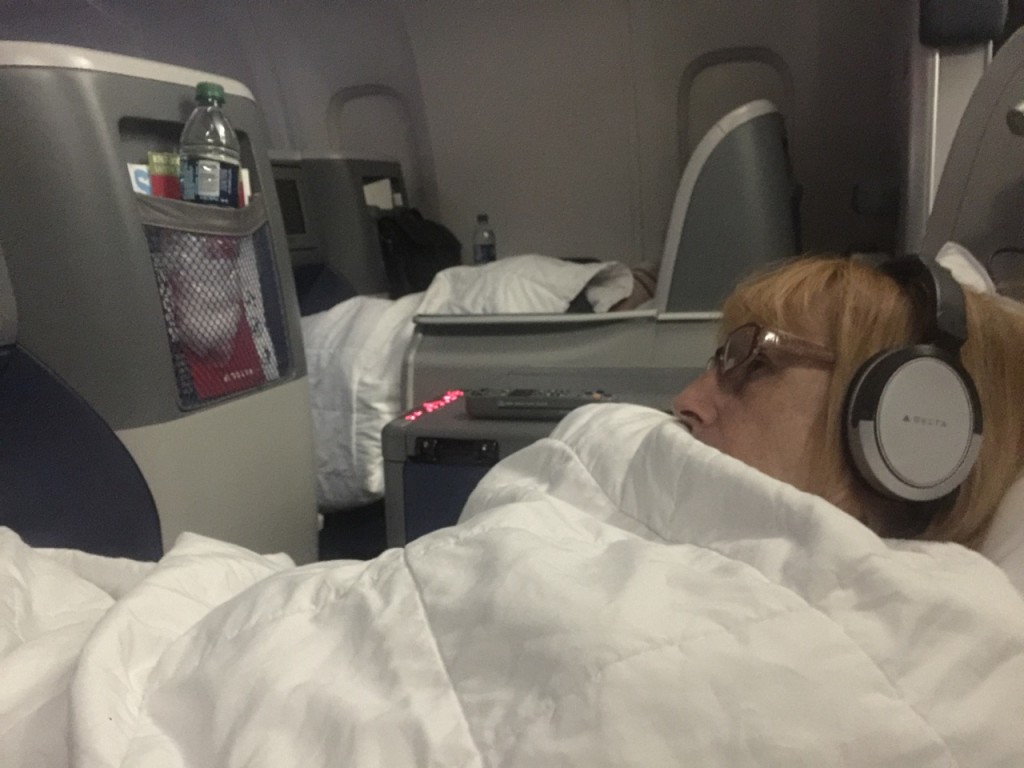 Sleeping on the job again.

2nd business class flight from Paris to Manchester restores my faith in French service levels and attitudes. Wrong seat for Wendy and stroppy attitude from the dollies with the trolleys. Well that’s my French prejudices confirmed and refreshed for another year.

Home safe and sound. Just 6 weeks before we escape again.

The good life after BREXIT: 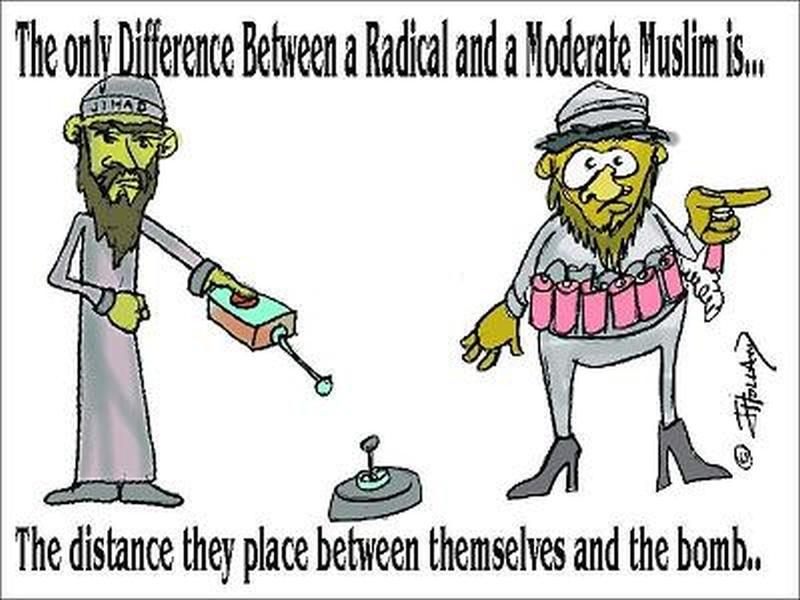