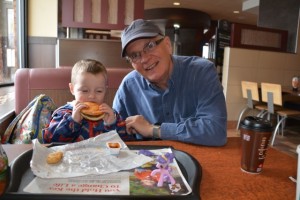 Thanks to Fiona for saving this important first in Jasper’s life for Papa. Hopefully first of many.

After lunch Fiona takes Jasper out on the golf course for a shuffle around on his skis.

Fiona helps me empty a wine bottle and a half.

I don’t believe it, Nike self tying shoes. Love the flashing lights. I wonder if they’ll do a pair with roller blade built in, that would be awesome: 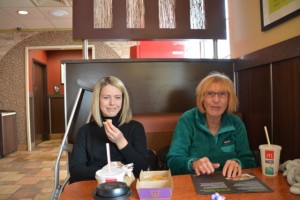 1. Welcome to the Islamic State. You do not have to be mad to work here, but it helps.
2. Just our little joke.
3. No, but really.
4. You will find the Caliphate to be a friendly and understanding employer.
5. Or else.
6. Speak to your line manager ASAP about signing up to our Virgin Pension Plan. It is posthumous. It has nothing to do with Richard Branson.
7. Annual leave is capped at four weeks. During this time you are permitted to tour the Caliphate enjoying world-famous sites of historical interest, but only if you blow them up.
8. You may also take three family days. This number remains the same, even if you have several families. 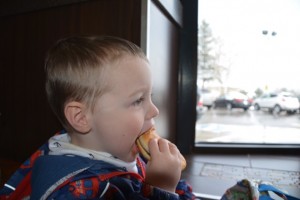 9. You are responsible for providing and maintaining your own black uniform. Avoid washing with light fabrics.
10. There is a much stricter dress code for martyrdom missions. Remember, you’re an ambassador for the brand. Members of staff who detonate themselves in a public place wearing incorrect attire risk having their employment terminated.
11. Orange jumpsuits are strictly for prisoners. Orange is not the new black.
12. Media training days are not optional. Mouthing anti-western platitudes while pointing at the sky is harder than it looks.
13. Sexual harassment in the workplace is taken very seriously in the Caliphate. Anybody failing to practise it will be shot.
14. Do this twice and you will really be in trouble.
15. Most of all, remember that the Caliphate is a progressive, equal-opportunities organisation. As in, we’re equally happy to kill everyone. 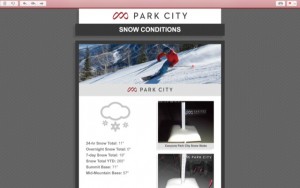 Wow 11″ of snow last night. What an awesome powder day it will be. I’m jealous.

Take Jasper down to Del Tacos, they have a children’s play area, but it’s a tad too old for him. A tad disappointing.

The Schmitts come round for dinner. Lemon meringue pie provided by Carol, first time in years, it was lovely. Excellent cheeses, Rillets and pate, just like being in France.

Angela and Jasper play really well together. Not a peep out of them. Good to see Angela’s already off the crutches.

Amazing it takes the Obama administration so long to recognise what the rest of the World knows. 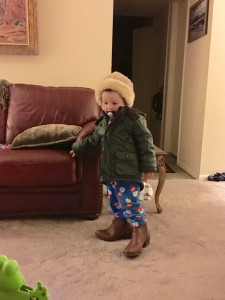 Secretary of State John Kerry declared Thursday that the Islamic State is committing genocide against Christians and other minorities in the Middle East, after facing heavy pressure from lawmakers and rights groups to make the rare designation.
“In my judgment, Daesh is responsible for genocide against groups in territory under its control, including Yazidis, Christians and Shia Muslims,” Kerry said at the State Department, referring to the terror group by an adapted acronym of its Arabic name.
He accused ISIS of “crimes against humanity” and “ethnic cleansing.”

Note though that he uses the politically correct word daesh, rather than IS to emphasise Islamic. No doubt they still feel that none of this is anything to do with Islam. Go read the Quran and all it verses of hate towards Infidels. 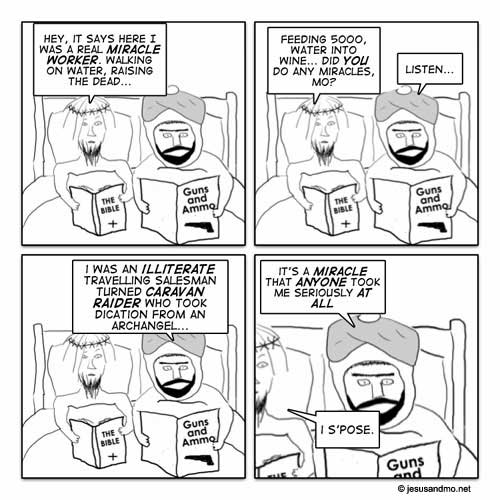 Wednesday – cool and sunny
Another 5″ snow over night – thanks be to Chione.

Visit to the sawbones today for follow up and X-rays.

The inevitable hospital form asked, what do you hope to achieve today, my response:

“Get me skiing next week.” Forever the optimist.

More X-rays than hecklers at a Trump extravaganza. I think my gonads have been fried so no chance of siring anymore children.

Prognosis – I think the look of incredulity when I asked about skiing next week, said it all. Good news is I should be back to normal (whatever normal is for me) in about 4 weeks.

I can start bearing full weight on it.

The break didn’t go all the way across. The mecanno stopped it.

If I hadn’t had the mecanno in then it would most probably have been a total break and required surgery.

My dodgy leg is no more susceptible to breaks or damage than my left. In fact with the mecanno it probably makes it stronger. Good news for future skiing.

Best of all I should definitely be ok for skiing next year. 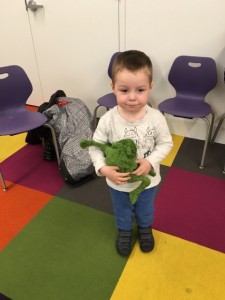 Jasper goes to the library for music and dancing. Click on image and then on blank screen to see video.

Fiona takes bug a lugs to music and dance for tots at the library.

Fiona helps me celebrate the good news as we down a formidable quantity of Zinfandel.

The EU wasted up to two thirds of the funds allocated to migrant projects between 2007 and 2013, an internal audit has revealed.

The report by EU auditors, which the European Commission tried to suppress, warned that the EU’s migration funding was “struggling to demonstrate effectiveness” because its projects were badly designed and managed.
Auditors identified €1.4 billion of EU overseas aid spent on migrant projects in countries such as Algeria, Georgia, Moldova, Morocco and Ukraine with “weaknesses” that “compromised the effectiveness of spending”.

The worlds most persecuted minority: 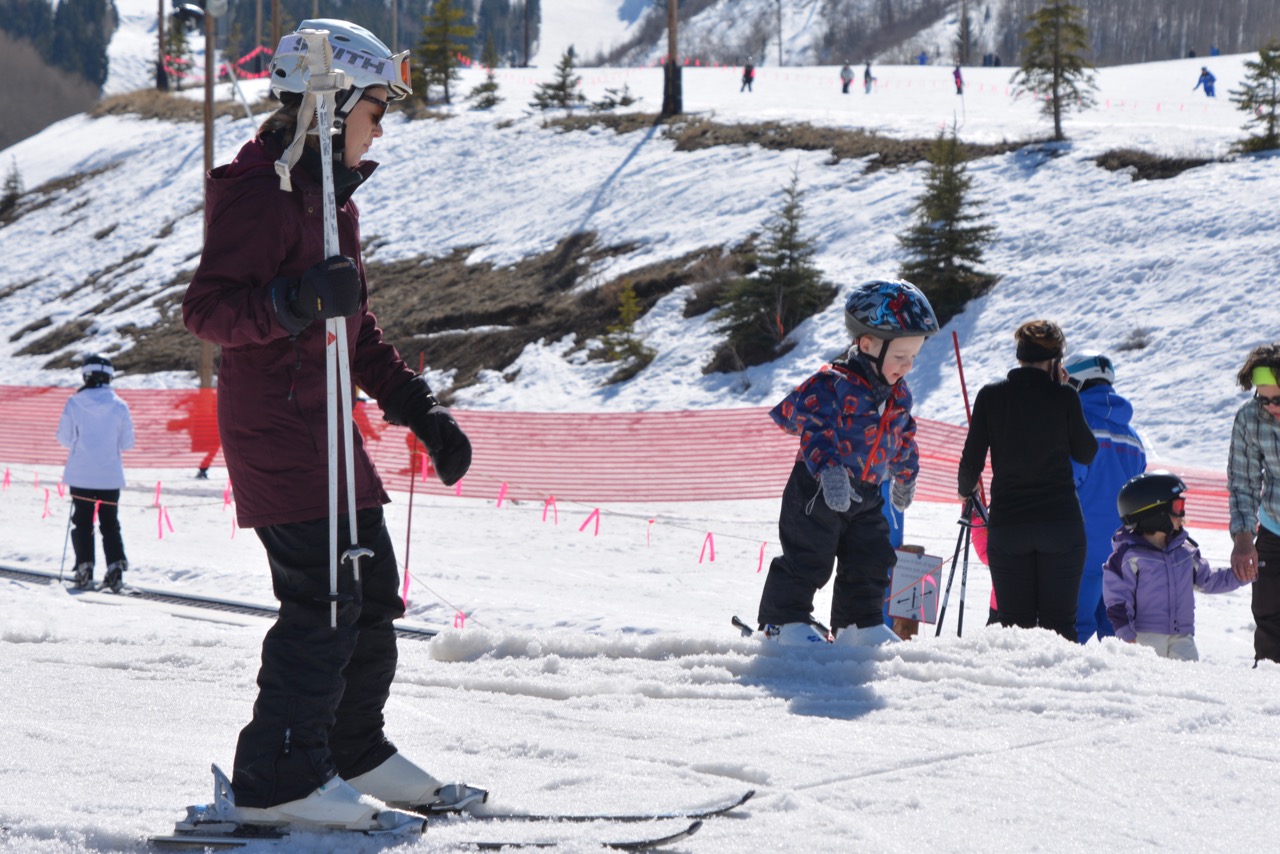 Fiona’s off skiing with Helen. We’re playing grandparents for the day. 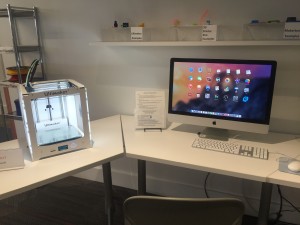 Take Jasper to the library for story time. This library is amazing it has computers and Internet galore. Best of all it has a dedicated discovery lab with about 8 state of the art 27″ iMacs, 3D printers and 3D scanner. You can use the 3D software to make things. I’m engrossed and get bollocked by Wendy for not staying in Story Time.

The rest of the library is pretty amazing with cafe, comfy chairs, kids play area complete with computer games and pets corner, oh and they also have lots of awesome books, especially for kids, and DVDs.

Jasper’s loves it. I think we’ll have to take him there a lot! 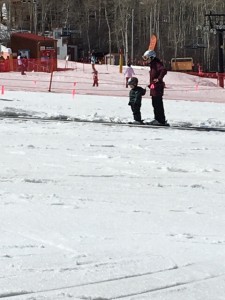 Meet Fiona for lunch and have a chat with Ava, our favorite barista.

After lunch take Jasper skiing. Wow he’s doing really well and best of all he’s loving it. My star pupils doing really well as she manages to ski down with Jasper between her legs and ski backwards for him – see video. Jasper gets another treat for doing so well at skiing. 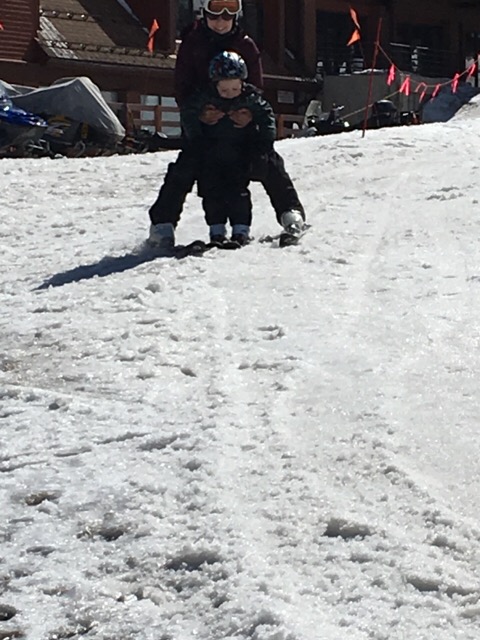 Jasper skiing agin. WE have to drag him off.
To see video click on image and then on blank screen.

Seems a tad un-godly being able to walk around with a broken femur. Thanks be to the meccano.

I’m on the wagon tonight.