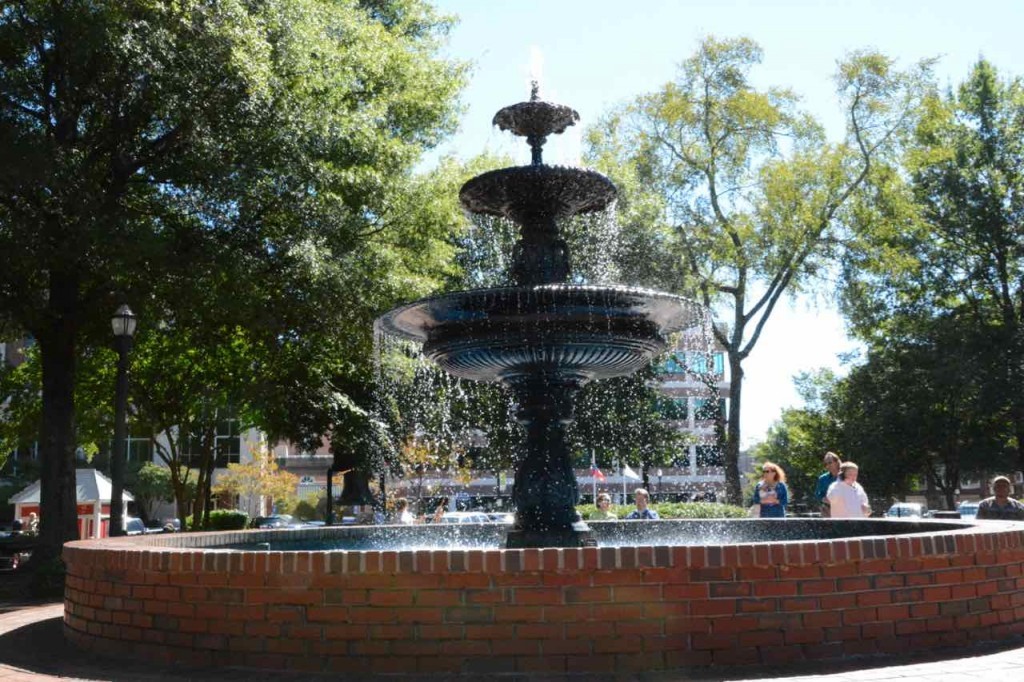 Now I know it may not sound much to celebrate, and probably a tad to much information, but I can now put my underwear on standing up. For a cripple it’s another win. Slow progress on the gamy leg but the 1-2 hours a day of physio exercises is paying off. A clear target of 2nd February 2016 and those awesome mountains really helps motivate. 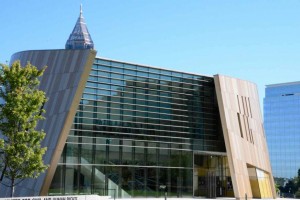 It seems like my Macbook has really missed me and is having a bit of a sulk as it has thrown out all my email accounts. I swear these Macs are catching that Microsoft virus, needing constant tender loving care, like some spoilt brat. Come on Apple get a grip.

Today we’re taking a breather, a lazy morning around Marietta square, sat enjoying a coffee by the fountain. Very mellow after 3 hectic days.

Overall a lazy day – isn’t every retirement day a lazy day. We were going for a walk around the battle fields but even skived out of that.

pettifog
Quibble about petty points. Practise legal deception or trickery.
“without lifetime careers to preserve, politicians would be free to debate rather than pettifog” 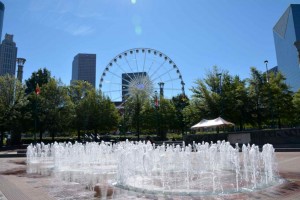 More laws from around Georgia:

Against the law to tie a giraffe to a telephone pole or street lamp.

One man may not be on another man’s back.

At Nickajack Elementary School, all peanut products are banned, even peanut butter and jelly sandwiches.

No one may practice the business of tattooing on Sunday.

It is illegal to carve your initials on a tree, even if it is on your own property. 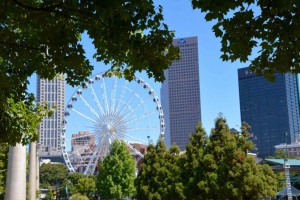 It’s interesting the comparisons of where we’re at with membership of the EU and American history.

The declaration of Independence in 1776 came about in the main because of taxation without representation and dictates from a distant King back in Great Britain. Then the civil war of 1861 was driven by the abolition of slavery and the excessive political power of the Federal government, with issues about individual States Rights and disagreements over tariffs. These issues led to the secession of several Southern states, and secession brought about a civil war in which the Northern and Western states and territories fought to preserve the Union, and the South fought to establish Southern independence as a new confederation of states under its own constitution. 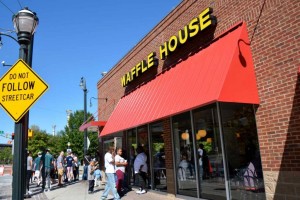 Queuing to get in the Waffle house and then they have a long wait for a table. Incredible and they’re not giving it away free.

Here we are in the UK with two burning issues, the excessive political power of the European Union, greater moves to less sovereign power and dictates by unelected bureaucrats; major immigration issues and less and less control over our borders.

Now they, the EU, are even wanting even greater union and even to have a European army.

The sooner we secede from the EU, hopefully without a civil war, the better. UKIP and Farage have got it right. Thank the FSM that we never joined the Euro.

I thought I should share with you a little enlightenment from the religion of peace:
https://www.youtube.com/watch?v=iWGA8i6scYY
So women had better look out and behave! The good news is that whilst you may beat your wife, you are forbidden to bruise her, draw blood or break any bones, nor may you beat her face or any “sensitive” parts of the body. Assumedly these strictures are put in place so that the World cannot see that you’re a low life wife beating scrot. Now how PC is that!
Monday – hot and sunny and the humidity has abated. 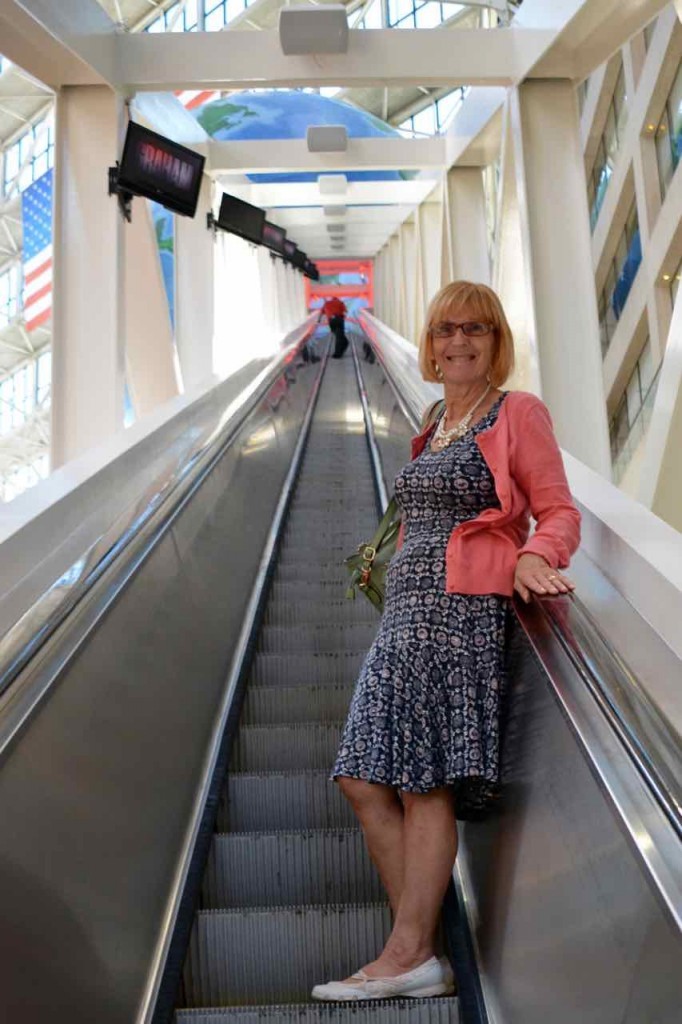 CNN escalator and of course being in America it had to be the longest in the World. Don’t use it if you suffer vertigo.

A tourist day as we drive into Atlanta to visit the Civil Rights Museum, CNN Centre and Coca-Cola Museum.

It seems the Civil Rights Museum has been hidden. SatNav gets us to the block, but can we find it. There’s signs for all the tourist attractions around the Olympic park but not this place. Finally find it, park up and then find it’s closed on Mondays despite the web site saying otherwise – see rant below. 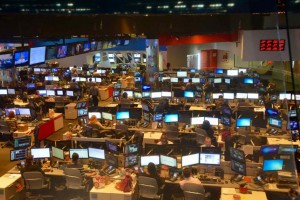 Have a lovely stroll around the Olympic park. Very pleasant. Then explore some of downtown and just so happen to bump into a Starbucks.

Do the CNN tour. All very interesting. Have lunch in there, yet another Starbucks in their massive food hall.

Then do the inevitable Coca-Cola Museum. Have to say very interesting and well done. Takes us a good 2 hours but get a tad tired of all the marketing hype. 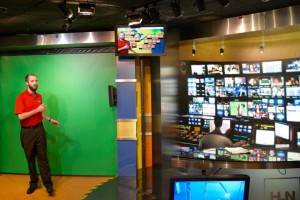 As we exit the Coca-Cola museum we just happen to trip across a Columbian marching band – see pictures – after all we are in America and they do love a good parade and band. Have an enjoyable half hour listening the music and watch the lithe and not so lithe bodies dancing. 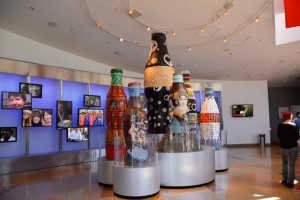 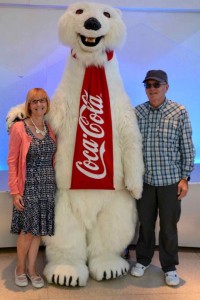 Bear getting frisky with Wendy.

Overall a very enjoyable day despite the best efforts of the nincompoops at the Civil Rights Museum.

Then we gird our loins for the drive home in the Atlantic rush hour. Just our luck the first three sets of traffic lights have been taken over by the Keystone cops. They obviously think they’re being useful but 15 minutes to go 2 blocks, that took a couple of minutes last week, would seem to indicate otherwise. As much use as a trap door in a canoe.

Perspicacious
having a ready insight into and understanding of things.
“it offers quite a few facts to the perspicacious reporter” 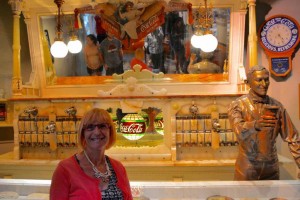 Cussing over the telephone is against the law.

No one may tease an idiot.

It is illegal to wear a hat in a movie theater.

Crosses may be burned on someone elses property, so long as you have their permission.

Barber shops may not open on Sundays.

Stink bombs are not allowed in the city limits. 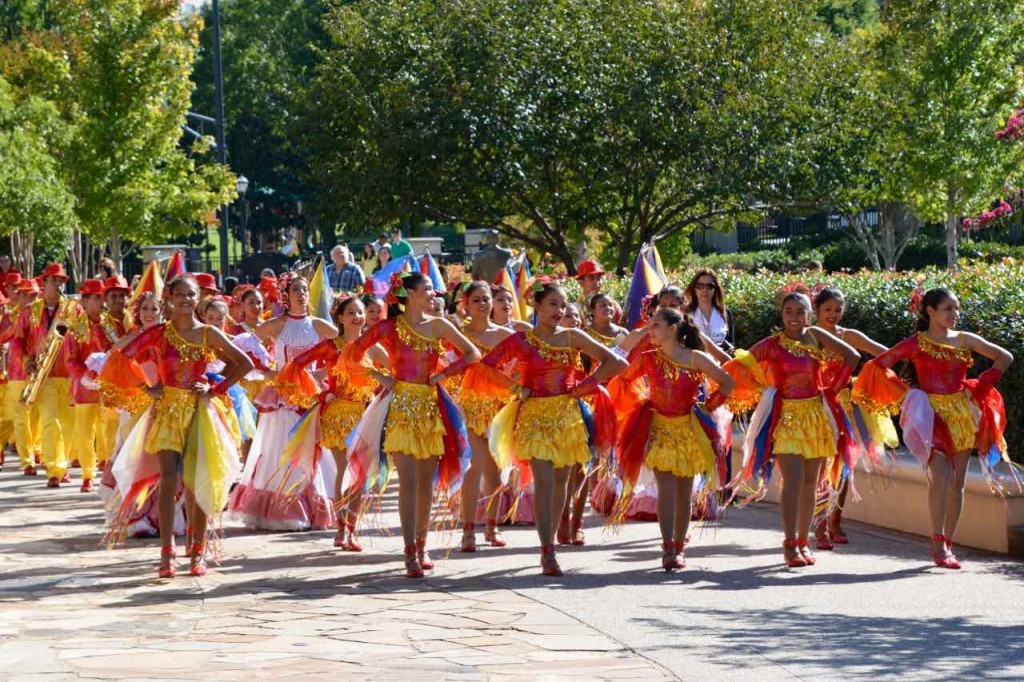 Another day, another parade and marching band.

Well it’s tidy up and packing day. Wendy’s on a clean up binge. I’ve got the car to sort. They have this really neat home car wash service. Just pick up the phone and the guy comes and cleans the car. Just $15, not bad.

Still wading through Prison Break. This must the ultimate in cliffhanger series. After a whole season it starts to get a tad tedious, especially as season 3 seems a mirror image of season 1. Tempted to give up on it, but it’s easy watching. You can play on the computer or nod off to it without really missing anything. 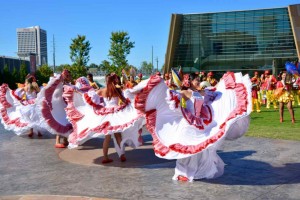 verisimilitude
the appearance of being true or real.
“the detail gives the novel some verisimilitude”
Love this on Euphemism. 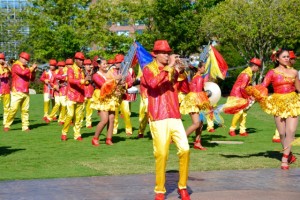 Just about sums up the decimation of our language by the PC brigade as they exterminate words and replace them with what they consider more PC less “offensive” piffle. If it carries on at this rate we’ll soon run out of “acceptable” words and dictionaries will wither away.
What a pity this comedian died so young.
Wednesday – hot and sunny. 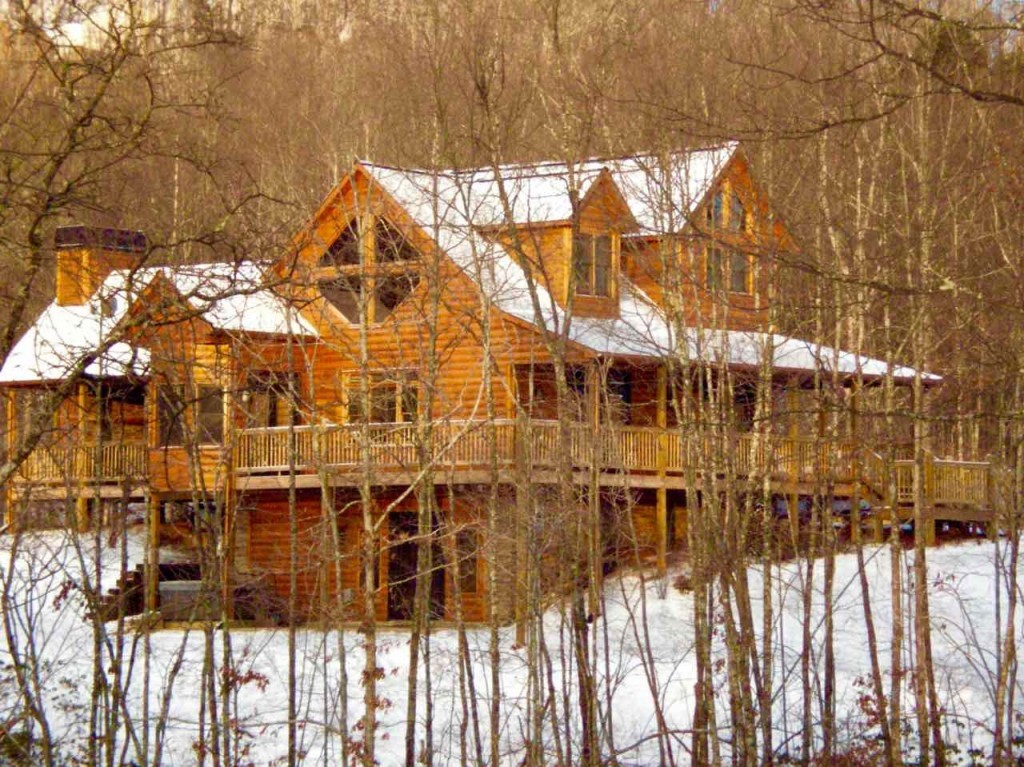 Our little log cabin in the mountains of Georgia for two weeks. No it isn’t snowing.

Pick up Hertz mobile and we’re off up North to our next home exchange in Blue Ridge in the Chattahoochee National Forest, North Georgia. Thankfully only a 80 mile drive.

Arrived at our little log cabin in the wilderness up at Blue Ridge. A lot of Confederate flags flying around here, I wonder if they know the civil wars over? It’s another lovely home exchange (see pictures), 3 bedroom, 3 bathroom, jacuzzi and of course a giant all American barbi. Bears, and who knows what else, stalk the woods. 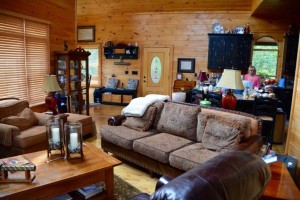 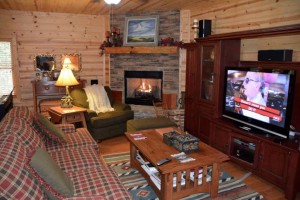 Nearly got arrested on arrival. There’s only 2 log cabins out here and instructions said ours was on the left. There we are furtively marauding around the closed down but remotely monitored home looking for a lock box. Turns out our cabin is on the right. Yes I can just imagine the call going into the Central Station (ALARM RECEIVING CENTREq for the purist) and a local security guard, armed to the teeth, being despatched with strict instructions to shoot first and ask questions later. 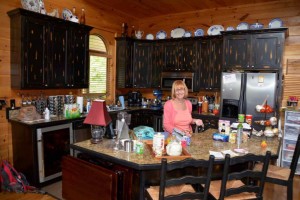 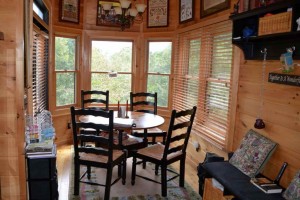 Wendy thinks she’s going to be dinner for the mossies, so I think Shes gone out to buy a burka made of mosquito netting judging by the length of time I’m sat in Starbucks waiting for her weekly shopping fix to end. A new supermarket chain, she’ll be happier than a woodpecker in a timber yard. Of course if men did the shopping there’d soon be an ergonomically optimised world standard for supermarket layout. Starbucks on the way in, wine and beer nearest the checkouts and fruit and vegetables at the back. 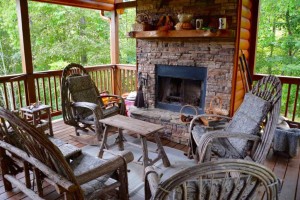 Our outside lounge and dining room. 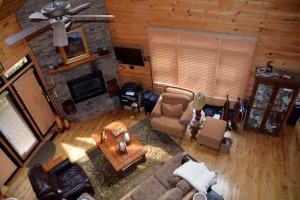 Slubberdegullion
Meaning: A slovenly, slobbering person.
Origin: 1650s
As in: Look at that sluberdegullion, sprawled on the sofa with his tongue lolling out. 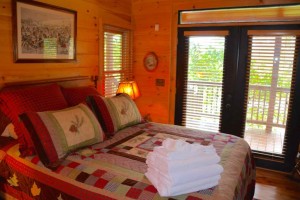 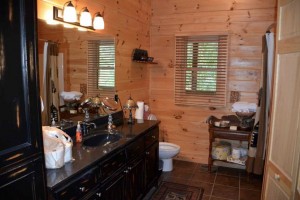 One of the bathrooms.

A few more crazy laws from around Georgia:

Picnics are prohibited in graveyards.

No person may be buried under a sidewalk of a cemetery.

It is illegal to set one price for two beers.

All Indians must return to their shore of the Chattohoochee River by nightfall.

It is illegal for stores to sell corn flakes on Sunday.

The fine for waving a gun in public is higher than actually shooting it.

Can’t cut off a chicken’s head on Sunday.

It is illegal to carry a chicken by it’s feet down Broadway on Sunday.

One may not place a dead bird on a neighbor’s lawn.

It is illegal to play catch in any city street.

Cars may not be driven through playgrounds.

Rocks may not be thrown at birds.

A person must obtain a permit to spread rat poison.

Persons may not wear hoods in public.

Chicken must be eaten with the hands.

It is illegal to say “Oh, Boy.

Every head of household must own a gun.

Yes, this last one takes a bit of believing but apparently there are 5 cities in the USA where it is illegal not, I repeat NOT, to have a gun in the house. God bless the 2nd and not forgetting the NRA.