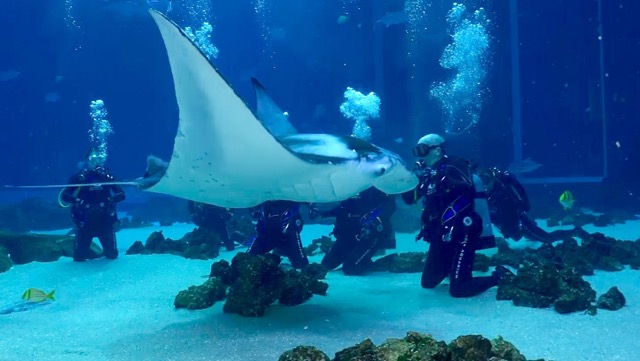 Eyeball to eyeball with a Manta Ray. 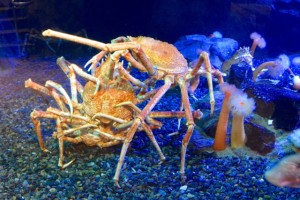 A crab menage s a trois.

Well better brush up on my diving skills and checklist ready for my dive. Love diving but unless you’re doing it regular you can easily forget the safety drills. And safety is paramount. After all there are old divers and there are bold divers but there are no old bold divers.

Visit to the Georgia Aquarium in Atlanta. One of the best Aquariums we’ve been to. Wendy’s paid for me to do a dive in the Aquarium with the “Gentle Giants” – three 30 foot long Whale Sharks, a few 15 wing span Mantra Rays, more Sting Rays than Talibans at a bible burning, more sharks and 1,000’s of cute and colourful fish of all colours and sizes. The second largest Tank in the world. 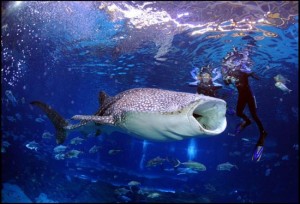 And the sting in the tale, so to speak, is the Sharks don’t bite, apparently and hopefully we’ll fed; the Mantra’s don’t have a sting / barb but the other Sting Rays do, but not a problem as long as you don’t stand on them, even though they can be well hidden in the sand.

What an awesome dive, up close and personal to all these. Great equipment, all organised, so easy and relaxing. The Mantra Rays are so inquisitive they come up close and personal, eye to eye just inches apart. They glide over your head and give you the closest haircut, in my case polish, you can imagine. A tad expensive, but worth it. Many thanks Wendy. She even got a personal escorted tour to view our dive.

One of the best dives ever. Better and more interaction with the fishies than Epcot. 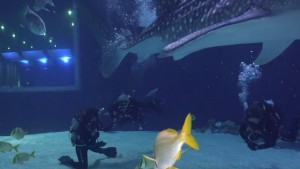 The dive may only have been 30 feet deep but as usual my ears struggle to deal with the pressure. Needs a slow descent and after the dive I’m listening through cotton wool in an echo chamber.

Driving home through Atlanta is a nightmare, 8 lanes of mayhem, a frog strangling down pour and its that hot and humid that there’s steam coming off the wet road so it’s even more difficult to see.

Don’t you just love some of our old evocative words that are falling out of usage. Today I start with my favourite succulent sounding word of the day: 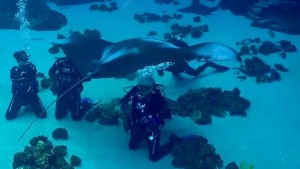 A close shave, well in my case a polish, as Manta Ray swoops overhead. Mind that tail.

Though being forced to close your business is bad enough, Athens-Clarke County forces one to obtain a license before holding a Going-Out-Of-Business sale.

Goldfish may not be given away to entice someone to enter a game of bingo.

Owners of mules may not allow their animal to roam around Athens unsupervised.

It is illegal for one to make a disturbing sound at a fair. 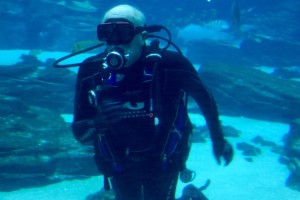 Georgia Aquarium Atlanta posing for pictures at the giant window.

Not a single Syrian refugee has been resettled in the six Gulf Co-operation Council (GCC) countries — Saudi ­Arabia, Oman, the UAE, Kuwait, ­Bahrain and Qatar — since the start of the civil war in 2011. The oil-rich Gulf states have also ­refused to sign the 1951 UN treaty on ­refugees, which outlines the rights of those fleeing conflict and the legal means for seeking asylum.

They share culture, region and ­language with the refugees and are all from the religion of peace yet seem to care not a jot for their fellow muslims.

Yet according to Abdulkhaleq Abdulla, a political commentator in the UAE, said: “The six GCC countries have spent hundreds of millions of dollars helping to set up and sustain refugee camps on the borders with Syria. The logic is that Syrians are better off close to home. When the war is over they can easily return.”

George Carlin on the 10 commandments:
Friday – hot and sunny. 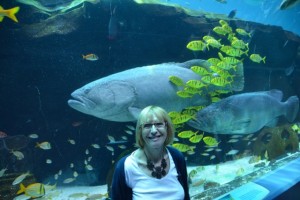 Should I worry? I’ve just received an email offering to plan my funeral. Do they know something I don’t know? Is it for an actuary? Joy.

We’re off up north (100 miles) to the Chickamagua National Battlefield Park. One of the largest battlefields in America and a scene of some of the bloodiest battles of the civil war. There’s a 7 mile drive around the battlefields. All very well laid out. A great NP visitor centre with interesting exhibits and a neat film about the battles. 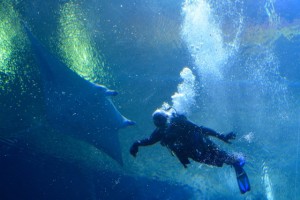 After that we drive up Lookout Mountain to Rock City. Some stunning views over 7 states and fascinating rock formations. A tad expensive admission fee, but we enjoyed it and despite loads of steps and hills a good workout for me.

We decide to stay overnight rather than drive back. After a complete online screw up on dates with Booking.com, they sort it out. Stay in the Clarion at Chattanooga. We stayed here a couple of years ago. We’re in Tennessee and the language is even more difficult to comprehend.

I know I’ve arrived home when I get a Taco Bell for me tea, Wendy settles for a Subway and I’m orgasmic when I see the hotel has a waffle machine for breakfast. Great American cuisine. Just love this country.

concatenate
kənˈkatɪneɪt/
verbformaltechnical
link (things) together in a chain or series.
“some words may be concatenated, such that certain sounds are omitted”
or my all time nerdy favourite
“Concatenated data sets”. 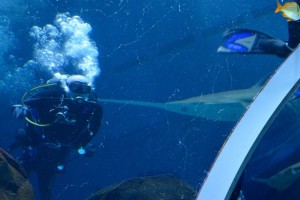 Watch where you’re sticking your nose.

Why do women fake orgasms? So that they can quickly get back to what they were doing.

In the swim-meet, after the blond came in last competing in the breast-stroke, she complained to the judges that “all the other girls were using their arms.”

Passengers evacuated from a British Airways flight engulfed by flames at a Las Vegas airport have been criticised for stopping to collect their luggage before jumping down the emergency slides in a flagrant breach of safety rules. Having seen the size of some of the travel trunks they try and jam in the overhead lockers it’s a wonder they’re weren’t all fried.

In a previous incident, passengers did not just collect their bags but some stopped to take selfies too. 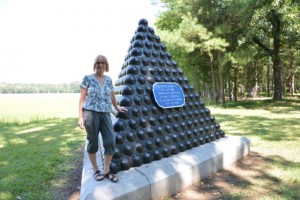 Drive into Chattanooga and take the free bus down town. Remember it when we get there. Have a wander around the river front area. This is where that dam bridge is I’ve been trying to remember. 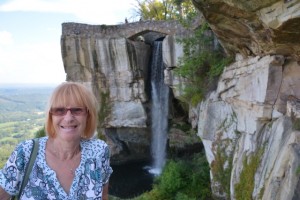 Drive down to Tunnel Hill in time for the Civil War re-inactment of the battle of Tunnel Hill. There’s great atmospheres with period tents pitched, band playing confederate music and themed tents for sawbones etc. Lots of characters in period dress. Get to try some Birch Beer. Reckoned to be like Root Beer, fortunately it’s not. Root beer tastes like antiseptic, amazes me why it so popular and why anyone would want a Root beer float – antiseptic with ice cream floating on top – beggars belief. 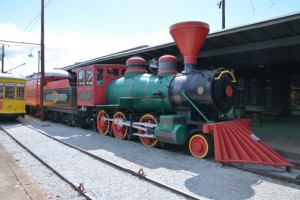 The re-inactment is on for just over an hour. It’s awesome – see pictures. Not like me to say it but well worth the $10. Cannons shake your bones to the ground and the action is impressive. The majority of the visitors are clearly keen and proud Confederates and probably yearn for a return to the good old days. Everyones very friendly, I think a bit intrigued to have some Brits in their midst. After you get chance to talk to the re-inactors who give up so much of their time on these events. Very friendly and love answering your questions. 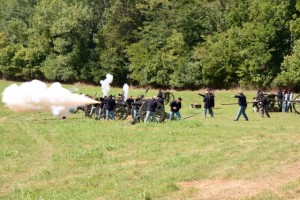 Awesome one of the best days yet.

Well we’ve been in Georgia 10 days now and can hardly understand a word they say. Now we’re in Tennessee and we understand not a jot. I kid you not, over breakfast one guy even told me he was going to “jump into the sausage and omelet cooking pot”. Obviously a Tennessee extreme sport similar to cliff diving. 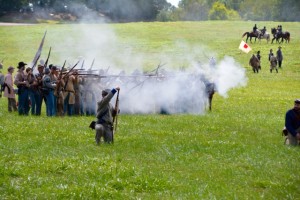 Must say my spoken Southern drawl must be vastly improving. I only had to repeat my request for “$30 of petrol on pump 3” just 3 times. Talking of which petrol has now reached $1.92, that’s £1.25 a gallon – cheaper than bottled water.

Jollux
Noun – Slang phrase used in the late 18th century to describe a “fat person”.
“Oh, he’s a bit of a jollux, ha?”
“Just eating me waffle and in walks a flock of jollux. That sure castrated my appetite.”

All citizens must own a rake.

Adult bookstores may not sell alcohol.

If you want to read your favorite book in public to your friends, do it before 2:45 AM.

Massage businesses may not sell alcohol on the side.

It is illegal to sell two beers are once for a single price. For example, a bar can’t run a 2 Bud Lights for $5 special. 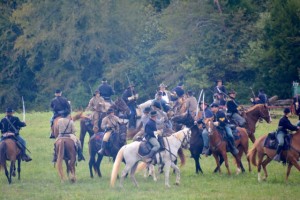 Don’t you just love the couldn’t care less, not my problem and nothing I can do attitude. This is just typical. I phone up to find if there is a civil war re-inactment. I point out to them that their web site is a year out of date and they must be loosing loads of visitors. What reply do I get? “I wouldn’t doubt it?” Doesn’t this thick excuse for an employee realise that it his job that’s being threatened and there’s something he should try and do about it? I blame the management for not empowering and listening to their employees. Sadly this is just all too typical these days. It’s bad enough in the UK but a plague of indifference over here.

The re-inactment was awesome. The best $10 I’ve spent so far this trip. Yet it was not crowded. Not surprising when the web sites a year out of date and a real amateur dogs breakfast. Sad and it must only be a matter of time before this place goes under.

John Cleese on muslims will kill you:
https://www.youtube.com/watch?v=7ULvKtcmWgo
This entry was posted in Uncategorized. Bookmark the permalink.