And this is how moguls should be done:

Look at them knees go. I’d definitely pass on the aerials. I wish.

Go for a walk, on crutches, around the estate. Make it about quarter of a mile then resort to the wheel chair Kurt’s following up with.

Each day it get’s just a smidgen easier. Thankfully I’m starting to wean off the Percocet. How any druggies cope with this brain addled state I’ll never know. Down to just two 10Mg tablets a day.

Well last nights snow didn’t come but on the bright side neither did the rain. We so badly need snow.

The Daily Thunderer from across the pond:

I see the loony liberal groups are all saying that it better to suffer a UK terrorist attack than suffer the government spying on us. My only hope is that if there is such an attack it befalls these numpties. Then we’ll see what they think.

Thank the FSM we’re +4,000 miles from all this lunacy back home.

Friday – very hot and sunny.
Awesome day as we take the kids up to Sundance for Jaspers debut on skis – see pictures and video. Fortunately he loves it. It’s in his genes. So cute on his proper little boots and skis. Started younger than his Dad who was 26 months old when he first ventured on skis. Jasper was only 22 months. Start them young. 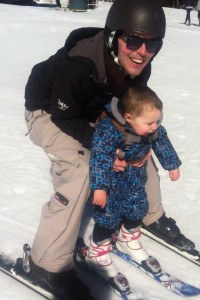 I’m on me crutches and becoming reasonably mobile.

Call in at the Heber rehab centre t drop off bag of double dunking biscuits and a card for all the awesome staff who looked after me.

Then in the evening we go dow to TGIF with the Park City Mountain Sports group at Jeremy Ranch Country Club. Can’t believe it’s 63F when we set off at 18:00, like a summers evening.

Chris and DeShaun arrive around midnight. My meds and sleeping tablets ensure I sleep through it.

I see back home the Thunderer’s obsessed with some Muslim teenage girls who gone off to ISIS. Good riddance. Let them be sex slaves there at least they’re not 5th columnists working from within. A few weeks as sex slaves and treated like slaves will some teach them the error of their ways. Let’s hope they take away their British Citizenship and tear up their passports. Don’t let them back in, no matter what.
Saturday – hot and sunny. 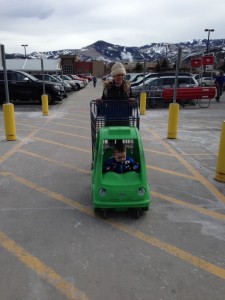 Kids finally shake a leg and get off skiing with Chris and DeShaun.

Ive managed to cut the Percocet down to 2 * 10Mg per day. Really need to get off these brain addler’s, you can feel them pausing your brain. Why any drug addict would want to be on this shit. Mind you the Valium I was on when in hospital was even worse. I can’t imagine how people cope with that.

Wendy nips up to team building, with Jasper, to pick up some $60 ski vouchers Todds got for us and then off to the daily supermarket trip. I’m left in with In The night Garden on TV. Addles your brains quicker than Percocet. Need to shake a leg and get up to get the controls to turn it off.

Afternoon starts with a trip to Walmart for socks. Yet another visit to Rite Aid, this time for some grease and slime for dry and cracked skin – is there no end to all this. Then, the real highlight, afternoon tea and coffee at Silver Star Cafe. A bit of sun and fresh air. Starting to get worried now as a 93 World War 2 veteran, complete with a steel bar in his right femur, shuffles up to me on his zimmer frame and starts chattering away. He has a superb zimmer frame, complete with sit down seat. Is this how I’m going to end up. Interesting guy to talk to and what a debt of gratitude we owe him.

Meanwhile Jasper’s giving Wendy the run around. Keeps her on her toes but her back struggles and as always I’m pretty useless.

Good news Jaspers has now learnt to say Papa. Prod him with my crutch and he says it like one of those push belly teddy bears. 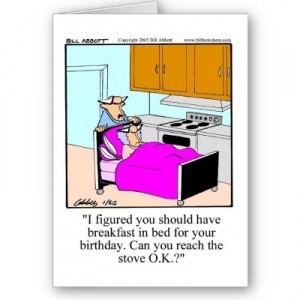 Kurt and Chris finally get off and out for a day at the Canyons they really enjoyed it there.

Last of the Lovenox injections this morning. That’s a major breakthrough. It’s a daily 81Mg Aspirin from now. 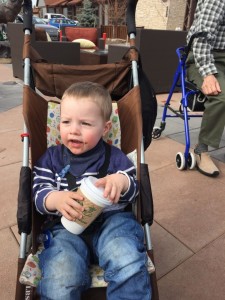 For Wendy and I the highlight is a trip to St Patricks Day party at one of the superb homes around here, stunning views, of a member of the Park City Sports Club – a bring your own appetiser and BYOB. Sadly I get there open the door and there’s about 20 steep narrow stairs down to their lounge. Worse than an icy black mogul run. I have to pass on it, so we’ve Sushi as a starter for dinner, along with our usual Sunday roast, of course vegetables, for seven. Even Jasper tucks into some roast beef. Sadly not much of an easy Mothers Day for Wendy.

George and Helen pop round with half a dozen St Patricks day cakes and a hot chilli casserole. 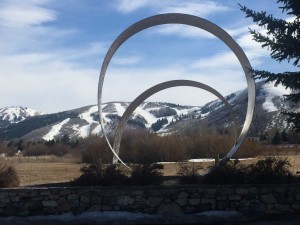 Jaspers off to a superb kiddies park with a little lad named Tony. Same age as him. They have a whale of a time and two hours later he’s carried home flat out and ready for a good snooze.

Wendy and I are baby sitting again whilst the kids go down to the Outlet’s Centre. Jaspers a lot of fun but certainly a handful. Makes you realise why nature makes you have your kids young. 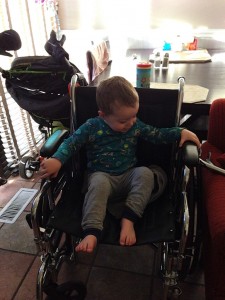 I’ll have a ride in this.

Meanwhile I’m making steady progress. Although cold right foot and poor circulation in right little finger is uncomfortable. Managed to cut the Percocet down to 1 * 10Mg per day. Need to go and see the pharmacist and see what he recommends as replacement for the Percocet if I need it. My philosophy is I’d rather have no pills to pop.
“Britain’s most senior police officer reassured the families of three runaway schoolgirls from east London that they would not be prosecuted if they returned home from Syria.”
Are we totally deranged? If they’ve gone then burn their passport; take away their British citizen ship; don’t let them back in.
Tuesday – hot and sunny.

Shopping in the morning. See my rant below. Unbelievable. 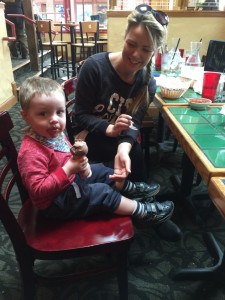 After lunch we go up to the Plaza and join the Park City Mountain Sports Club in the Baja Cantina for Tipsy Tuesday. 4 weeks and no alcohol but I go mad and have a non_alcoholic lager along with some Flautas – they’re so tasty. 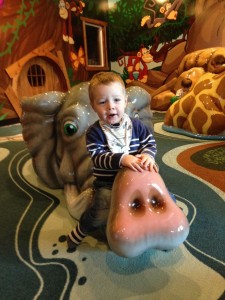 We go into the Columbia store. It’s a clothes shop. I ask for a tape measure and get a look of total incredulity as if I’m asking for them to go and get me a hooker. In the time it would have taken to get me a hooker he returns with a tatty measure. Fortunately we notice it starts at 7 rather than zero and to add insult to gross incompetence it’s centimetres. As a good European you’re probably saying well whats wrong with centimetres? Well it could have something to do with every label being in inches.

By now I’m ready for hobbling out on me crutches and I’m in full blown Victor mode. I point out the ridiculous of a 7 centimetre short measure in an imperial measure store.

He then adds insult to injury by saying “well most people know their waist size”. That’s a great way to enamour yourself to your customer.

He traipses off and eventually returns with a tape measure in inches. Only one minor problem. It’s only 24″ long. I know I’ve lost weight but do I really look like a 24″ waisted ballerina? Victors now ready to vote with his crutches. 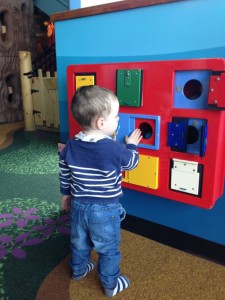 Kurt and Fiona are off skiing so we’re child minding. Take Jasper down to Monkey Mountain for a play.

By way of yet another complication it seems I’m now suffering with Guyson Canal Syndrome (self diagnosed of course). My little finger’s tingling due to pressure from the crutches on my hand which is trapping a nerve. A real bugger, because without me crutches I’m immobile. I really am beginning to wonder whether all the side effects / complications are worse than the original problem – well not really – but it does make you appreciate how you hear of the elderly suffering a fall and it kills them off.