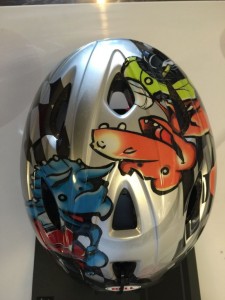 Jasper’s ski helmet. Ready for his debut on the slopes.

3″ fresh virgin powder overnight. Up for early tracks and as Tycoons been groomed last night head straight up there for a couple of runs before it gets spoilt. Overall a good mornings skiing.

Wendy’s volunteering at the hospital.

In the evening Phil and Ruth come round for a drink. They’re from Brisbane. I met them on the mountain, we got chatting, and it turns out they’re doing their first home exchange in Lawrence’s place down at Kimbal Junction, where we did an home exchange 2 years ago.

Last week it was the Democrats that I ranted about, as promised this week we turn to the Tea Party. Here’s their “Non-negotiable” Core Beliefs:

1. Illegal aliens are here illegally.
2. Pro-domestic employment is indispensable.
3. A strong military is essential.
4. Special interests must be eliminated.
5. Gun ownership is sacred.
6. Government must be downsized.
7. The national budget must be balanced.
8. Deficit spending must end.
9. Bailout and stimulus plans are illegal.
10. Reducing personal income taxes is a must.
11. Reducing business income taxes is mandatory.
12. Political offices must be available to average citizens.
13. Intrusive government must be stopped.
14. English as our core language is required.
15. Traditional family values are encouraged.

Wendy’s mountain hosting on the plaza.

Now riddle me this. Wendy sends into lost property, one ski. How does that occur? Is there someone on the mountain performing leg amputations?

A great days skiing with Carol and Hal.

Here is the first of a list of top 15 of the dumbest things the smart dudes from the TEApublicans have said:

“You would be giving off more CO2 if you are riding a bike than driving in a car.” – Ed Orcutt, Washington GOP State Rep., stating that bicycles pollute the environment more than cars do.

“Oh, no, we’re not going to have any casualties.” – George W. Bush discussing the Iraq war.

“So Miss Fluke, and the rest of you Feminazis, here’s the deal. If we are going to pay for your contraceptives, and thus pay for you to have sex. We want something for it. We want you post the videos online so we can all watch.” – Rush Limbaugh

“I think the right approach is to accept this horribly created — in the sense of rape — but nevertheless a gift in a very broken way, the gift of human life, and accept what God has given to you… rape victims should make the best of a bad situation.” – Rick Santorum

Another spring skiing day. Go up to Deer Valley with Hal. I think we’re both feeling burnt out muscles from yesterdays tour de force.

Have a good day skiing though. I take a mid morning coffee break, while Hal tries Mayflower and some of the blacks over that side. Perseverance look really good but my legs are knackered so I need to save that for another day. We both survive Wizard, a double blue, sheet ice and bodies everywhere.

I think by the end of this tour I’ll be speaking fluent American at this rate.

More of the top 15 of the dumbest things TEApublicans have said:

“If it’s a legitimate rape, the female body has ways of shutting that whole thing down.” -Todd Akin

“When a physician removes a child from a woman, that is the largest organ in a body. That’s a big thing. That’s a big surgery. You don’t have any other organs in your body that are bigger than that.” – Mary Sue McClurkin, Alabama GOP State Rep.

“To redefine marriage is discriminatory towards those who hold the sincerely held religious belief that it is a sacred institution between a man & a woman.” – Illinois state Sen. Kyle McCarter (R), in response to the state Senate approving same-sex marriage in Illinois.

“I struggled with it myself for a long time, but I came to realize life is that gift from God. I think that even when life begins in that horrible situation of rape, that it is something that God intended to happen.” – Richard Mourdock, Indiana GOP U.S. Senate candidate.

“There is no one who doesn’t have health care in America. No one. Now, they may end up going to the emergency room. There are better ways to deal with people that need health care than this massive new program.” – Phil Bryant, Republican governor of Mississippi.

”Feminism was established so as to allow unattractive women easier access to the mainstream of society.”-Rush Limbaugh

My first day as a plaza host. Up for the 07:30 workers bus; briefing 08:00; down in rentals until 10:00; plaza for the day; meet Wendy for coffee / her lunch; back to plaza; down in the bowls of the earth again for rentals from 15:30. Fortunately only 3 more of these to do, much prefer mountain hosting – at least you get to ski.

Boy was it hot and sunny. I’d slapped a load of that gunge on, but one of the managers was so concerned that my baldy pate was rapidly becoming a red nose beacon that she bought out a PCMR cap for me – how very kind.

Another cruelty to snow day.

More of the top 15 of the dumbest things TEApublicans have said:

“[America has to import so many workers because] for the last 35 years we have aborted more than a million people who would have been in our workforce.” – Mike Huckabee

”The feminist agenda is not about equal rights for women. It is about a socialist, anti-family political movement that encourages women to leave their husbands, kill their children, practice witchcraft, destroy capitalism and become lesbians.” – Pat Robertson

“He is purple – the gay-pride color, and his antenna is shaped like a triangle – the gay pride symbol.” – Jerry Falwell’s warning to parents that Tinky Winky of Teletubbies, may be gay.

“Stripping your freedom is not a pipe dream but a reality! Fema Camps are already built and waiting for you! They’ve been practicing for Martial Law and the great round-up of citizens in the 300-acre fake city Obama had built in Virginia. Do NOT dismiss this under any circumstance. It is serious.”

By lunch time the 50F heat has done it’s job and the snows softened up. But oh so hot and sunny – spring skiing. Get a code green – euphemism for lost child. In this case it was two lost kids and Grandpa was in deep trouble with his daughter back in Ohio. All resolved successfully.

Did a few single run guest tours. Nice thing is we’re encouraged to ski, so much better than the plaza. By 15:30 the bases was a giant slush puppy. Makes for hard skiing. Even Silver Queen was a mogul slush puppy.

Here are the first of the top ten reasons you might just be an unfortunate member of the Tea baggin’ community:

1 You don’t want the U.S. Government to spend money, unless it’s on you of course. (You loudly yell about how much you hate the idea of government spending while at the doctor’s office as a Medicare beneficiary.)

2 You think comparing Obama to monkeys and chimps is NOT racist; they just both adore bananas I suppose. (It’s the only similarity I was trying to point out while bringing my stuffed monkey to a Sarah Palin event, I swear.)

3 You think Hawaii is more “foreign” than the Panama Canal because in 2008, Obama was deemed a non-citizen by crazy “Birthers” even though he was born in Hawaii, which is an actual state. (His opponent, born on the freakin’ Panama Canal, is just a U.S. military base. But I’m sure race, again, had nothing to do with it.)

4 You truly believe that Obama is similar to Hitler; because, you know, wanting to give millions healthcare is the same as supporting genocide… (Affordable healthcare, gas chambers — YES! I see the connection!)

5 You reason that “The key to being safer is MORE guns.” (We will never be safe until the gun to person ratio in the United States is at least 2:1.)

Monday – rain and snow, too warm.

Can’t believe it, rain in the town. That’s the first time in 11 years of skiing we’ve ever experienced rain in the town, rather than snow. Bloody climate change. If it spoils the skiing then it really is urgent that governments start taking notice.

Here are the remaining top ten reasons you might just be an unfortunate member of the Tea baggin’ community:

6 You believe that racism in general is just a silly concept Liberals throw around to make people angry… while holding signs like these: racist teabagger

7 Incredulous statements are a requirement for public office: “It is not enough to be abstinent with other people, you also have to be abstinent alone,” — former Delaware Senate Candidate, Christine O’Donnell.

8 You complain that nothing’s getting done, while simultaneously being the chief reason that nothing gets done. (House of Reps anyone? Bueller…?)

9 You think you can control the country even though Obama was elected twice, in basic landslides, and your own party is starting to hate you. (As we bow our heads, let us thank the good Lord that comes in the form of gerrymandering.)

10 You pretend to be Christian, but you really pray to Ronald Reagan. (Why has he not been sainted? I’m confused.) 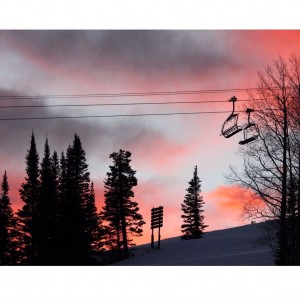 Red sky over the slopes.

Thank Chione for the 3″ of snow overnight. Made all the difference.

Skied with the PCMSC Tipsy and Taco group. Ski until 14:30 and then meet up for Margaritas (tried one the other week, never again) and Mexican food. Settle for a couple of pints of cutthroat – broke one of the 10 laws of retirement yet again. Wendy joins us for a glass of water.

According to the Tea Party, here’s what they (government) are going to do:

Grab our guns and leave us defenseless!

Grant amnesty to tens of millions more illegal aliens to kill your vote!

Intern unlimited numbers of US citizens without cause!

Brand conservatives and the Tea Party as terrorists!

Teach our children that sexual perversion is normal!

Strip your wealth by taxing you to death and give it to the world to consume!

Bypass then reduce and eliminate Congress!

Make states accountable to the UN!

Reduce our military by 90%!

And we think that UKIP are extreme and off their rockers?