Posted on February 4, 2015 by admin
Wednesday – warm and cloudy with the possibility of some snow – we hope. 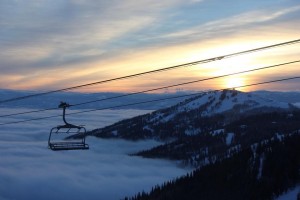 View from above the clouds at Park City.

Looks like there was an inch of snow overnight, so although it’s almost a whiteout with the clouds there’s a nice smattering of powder on top. Makes for pleasant skiing. Still praying to Chione for more.

Meet Carol at the Snow Hut and have a good mornings skiing with her.

Wendy’s working at the hospital today so it’s going to be a hospital restaurant tea tonight.

Booked most of our summer trip. We’ve a week at our caravan in the Loire Valley; drive over to Italy via Geneva; a hosted home exchange in Verona (never done a hosted exchange so we’re both a little nervous, but will give it a try); then a VRBO in the Tuscan country side just outside Florence; a VRBO in Padua, so hopefully get a few days in Venice; back to caravan in Loire up the coast of Italy (still got to plan that).

Looking for VRBO or home Exchanges can be a nightmare. It never ceases to amaze me how stupid people are when advertising their properties. The really stupid ones don’t bother with any photos; those that show you the inside of their property just after a bombs hit it and in serious need of tidying up and removing cast off socks and underwear; finally you have those that have 36 photos of everything from a garden tap, to a staircase, fields and their town, but not a clue as to what the inside of their property looks like. Makes you wonder whether they’re truly so dim witted or just trying to hide something.

One of the predominant Italian themes seems to be having a crappy, uncomfortable looking settee in a lounge, covered by a tatty shell shocked blanket, but so uncomfortable that there’s no chance you’d fall asleep, even through East Enders after a full bottle of red wine. Best of all they have an ancient TV, probably built by John Logie Beard himself, and positioned behind the settee so that you need to be an owl with 180 degree head rotation to see it. What planet do these chuckleheads live on.

Set out skiing at lunch time. 13:00 start my free ski workshop – euphemism for ski lesson, but sounds so much more macho and competent.

Drop my skis of for repair. For the first time ever here, in 12 years, they’ve had a altercation with some rocks. The rock won. Need some deep poly filler and welding.

Benedict Cumberbatch (never heard of him), who appeared in 12 Years a Slave, has called himself an idiot for using the word “coloured” when talking about black actors not getting enough opportunities.

Pathetic. If not coloured, then is black the PC flavour of the month? It certainly seems to be the popular term in the US. What term should we use – non-White, sunburnt, Pantone 426, heat absorbent, spectrum challenged. These Nazi PC storm troopers need to get a grip, at this rate we’ll be running out of PC acceptable words in the English language.

Friday – cold and cloudy. Need the trees or a sprit level to help stay vertical. 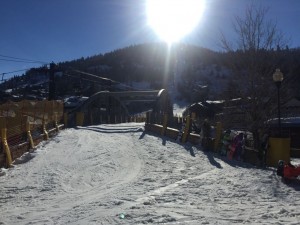 I’ve had my say on Republicans – the GOP – now it’s the turn of the Democrats. You Might Be A Democrat If…

You’ve ever said, “We really should call the ACLU about this.”
You believe that a few hundred loggers can find another career, but the defenseless spotted owl must live in its preferred tree.
You ever based an argument on the phrase, “But they can afford a tax hike because…”
You keep count of how many people you know in each racial or ethnic category.
You believe our government must do it because everyone in Europe does.
You can’t talk about foreign policy without using the word conspiracy.
You think Ralph Nader makes a lot of sense.

What an awesome mornings skiing.

Quit at lunch time by which time the best of the virgin powder been churned into a haggard old slush.

After lunch Wendy and I take a bus into Main Street to see what all this Sundance fuss is about. Then have a stroll down to Starbucks for a Clover moment – Ethiopian Konga supposedly has the flavours of strawberries and berries, although I can’t taste them it is a flavoursome coffee and leaves a gorgeous after taste. Lash out and buy a packet.

You don’t understand why anyone was bothered by Jane’s trip to Hanoi.
You think solar energy is being held back by those greedy oil companies.
You’ve never been mugged.
You actually expect to collect Social Security.
You think the Great Society has actually worked.
You don’t see the similarity between WONK and WANK.
You got teary-eyed during the film “The American President.”
Your house smells like a garbage dump because of your commitment to recycling. 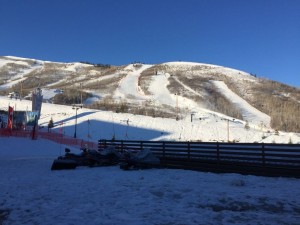 You think political patronage describes the Kennedy family.
Your High School Year Book goals included the words “help people.”
You think the Free Market is where they hand out Government cheese.
You think Carter should be on Mt. Rushmore.
You believe personal injury lawyers when they say they are just trying to defend the little guy.
You know that those profit mongering drug companies could find a cure for AIDS if they really wanted to.
You actually believe the NY Times and Washington Post.
You know at least one Vegan.
You’d rather own Birkenstock than Merck Stock. 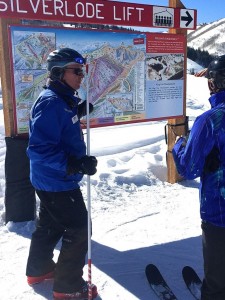 Victor does his Mountain Host stint, being helpful and nice to guests.

It’s a centenary celebration day. We’ve had another inch of powder overnight. The flags should be flying, bands playing and we should all be bowing, freezing our tongues to the snow, in worship of Chione – Goddess of Snow – as we’ve now topped the “100 Inches of snow this season mark”.

Met George at the top of Summit for a days skiing. Hal was out too, so he joined us. Two advanced skiers. Try following Hal doing those controlled short radius turns of his and at the same time remembering all Mike (instructors) tips. A real challenge but worth it.

Sunday was last day of Sundance Film Festival. What a nightmare, bubble heads everywhere, how those bus drivers cope I’ll never know.
Buses were absolute chaos. I came home and just had to have a Victor Meldrew moment to cope with it. Fortunately Wendy found all the episodes of “One Foot in the Grave” on Youtube. I was amazed that they were all available

After two episodes from season one I’ve regained my composure. Awesome, a fantastic cure all.

Now at least the town and the bus service should be back to normal.

You think public housing is great, but just NIMBY.
You think the anti-war protestors from ’60s are the real heroes.
You think that Supply Side Economics refers to your dope dealer’s stash.
You think Michael Jackson was a great example of diversity.
You actually think that poverty can be abolished.
You think that Joan Baez had something to say.
You admire the Swedish welfare system.
You think the Flat Tax should be at 95%
You go to Gay Pride Day parades so that no one can call you homophobic.
After looking at your pay stub you can still say, “America is undertaxed.”

Meet the PCMS group for a good days skiing followed by Margaritas in the Baja Cantina. Not for me. Tried one last week and that was enough. 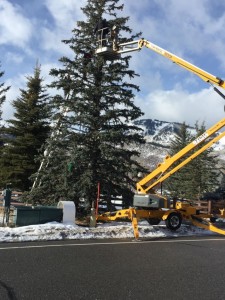 Taking down the Christmas tree lights at one of the houses. People pay upwards of $500 per tree to have them decorated.

After the other mornings debacle I can now understand why US healthcare is in crisis. A cast of thousands involved in billing and yet only a few doctors and nurses. Its a totally fragmented screw up. You pay your bills, then find you’ve a debt collector on your back for some blood works done 6 months ago that you’ve never been billed. Ah separate department. Our contracted provider can’t see the amounts involved or bill you. A so called customer service numbskull explains it all to me “it’s all too big and complicated to be dealt with by one department, YOU’LL need to ring the lab, I can’t ring them”. When asked if she really worked in “Customer Services” and could comprehend what those two words meant she hung up. It turns out that the lab did send an invoice to Rydal mount, Park City. I wonder why we didn’t get it? They did have the correct address, I should know as we had to quote it over 4 times in trying to get through to the right department. “Oh I’m sorry sir we can’t email you the invoice, we’re still using quill pens and left over blood for ink”. No email – yes this is the 21st century – and the good old USA still believes it leads the World.

2 bloody hours of frustration to unscramble this. Then to add insult to injury Skype just goes down just as you’re getting the final piece of the jigsaw. Typical SNAFU. Conclusion “the whole World is F..ked up, especially anything involving IT or computers”.

It really is time we introduced Saturday afternoon feeding of the perpetrators of this crazy, senseless, software and marketing driven crap, to the Lions in a local Colosseum. Just think of the benefits. Free entertainment for the masses. No need to pay ludicrous salaries to chuckleheads, who’s brain are so far under developed that they can only kick a ball around and attempt to water the local football pitch by gobbing on it every 38 seconds. Helps with natural selection by weeding out the common senseless. The threat of becoming Lion fodder improves software, customer service and eliminates marketing aimed at our exploitation.