Posted on January 29, 2015 by admin
Wednesday – bitterly cold and sunny.

What a fantastic day. I now have 47 hints and tips to work on to improve my skiing. Mainly spread my legs apart (not the sort of advice you give to a daughter) and lean into my boots, weight forward and lean into the fear. And best of all it was all free. 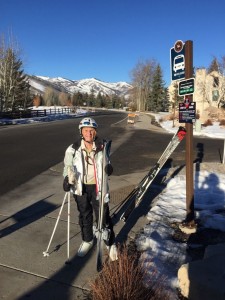 Wendy at the bus stop, all excited for her first days skiing.

Being a drug addict is a moral failing and a crime, unless you’re a conservative radio host. Then it’s an illness and you need our prayers for your recovery.

The United States should get out of the United Nations, and our highest national priority is enforcing U.N. resolutions against Iraq.

Government should relax regulation of Big Business and Big Money but crack down on individuals who use marijuana to relieve the pain of illness.

“Standing Tall for America” means firing your workers and moving their jobs to India.

A woman can’t be trusted with decisions about her own body, but multi-national corporations can make decisions affecting all mankind without regulation. 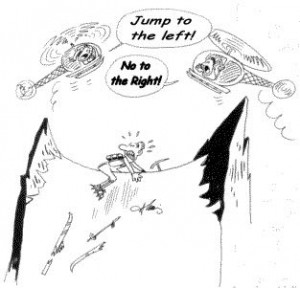 I know I skied today, and fell asleep through most of the evenings TV, after a few glasses of wine, but thats about all I can remember.

Oh that was it a lazy start. Up on Temptation for 11:00. Practised all my 47 hints and tips to fix me bad habits. Really difficult keeping legs further apart and leaning forward and into my boots is tormenting some new muscles.

Back home for 15:00. Plumber turns up to fix the heating. As suspected it was a dirty filter stopping the warm air flow and also causing the boiler to overheat (pity it didn’t share any of those excess therms with us) and cut out. Anyway all fixed and now Wendy can fry.

Jesus loves you, and shares your hatred of homosexuals and Hillary Clinton.

The best way to improve military morale is to praise the troops in speeches while slashing veterans’ benefits and combat pay.

Group sex and drug use are degenerate sins unless you someday run for governor of California as a Republican.

If condoms are kept out of schools, adolescents won’t have sex.

A good way to fight terrorism is to belittle ourlong-time allies, then demand their cooperation and money. 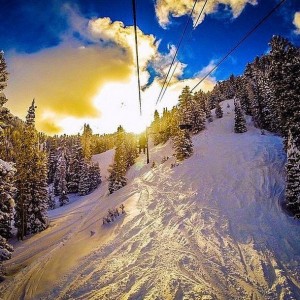 It’s the start of Sundance Film Festival fortnight. Two weeks of mayhem and chaos with the pretty film people parading around, high heels, “fur coats and no knickers” as we say.

Yeah, they’re going to let me go up with the big boys as a mountain host, rather than just a plaza host, so I did a great mornings training with Todd. Most of it’s fairly straight forward, until you come to having to deal with the radio, but at least I can do a 10-4. Your day as a mountain host starts at 08:00 with briefing and assignments; then onto plaza or meeting points from 08:30 to 10:00 to meet, greet and dish out maps and information; then back to lockers to get kitted up; up onto the mountain to our assigned map, where we answer questions and direct skiers and even snowboarders around the mountain. 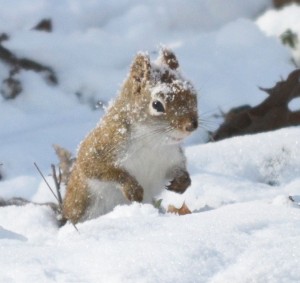 Nearly skiwered. Poor thing ran out in front of me, saw me coming. He panicked, didn’t know which way to turn, dashed left, then dashed right, then left again. Just missed him.

Good news is there’s 3 of us assigned to each map, so at any one time there’s someone at the map and someone out skiing. You’re encouraged to take guests on single ski tours. Then there’s breaks for caffeine and lunch. So not all bad and we should get to meet plenty of people and get in some skiing, in between dealing with code Greens (separated children, they’re not lost merely separated) and code 10-50 (accidents, where we summon up mountain patrol, the cavalry, and try and keep the injured guest calm).

After an eventful morning with Todd, meet up with Wendy for her lunch and my dirty chai with two extra shots. Looking forward to my first full day on the mountain

Drop skis and uniform off in our locker and then off to supermarket to lug some essential supplies home.

HMOs and insurance companies have the interest of the public at heart.

Global warming and tobacco’s link to cancer are junk science, but creationism should be taught in schools. 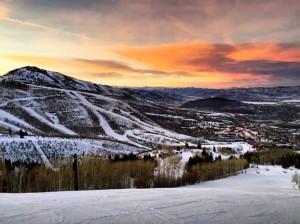 I encounter my first Sundance bubble head at the bus stop. Conversation goes something like this:

Bubble Headed (BH) young woman – “Does this bus go to Sundance?”.
Me – “Well into goes to Fresh market, ski mountain, main street and then Deer Valley. Where do you want to get to?”
BH – “I’m not sure. I think it’s called something theatre.”
Me – “Well there’s the Egyptian Theatre, etc., etc., PC MARC>”
BH – She’s frantically searching her Android for a glimmer of hope as to where to go. “Yes, I think it may be the MARC.”
Me – “Well whatever you do then don’t catch this bus, just walk 50 yards back down this road to the PC MARC.”
BH – “Before I set off my APP said catch a bus. But I don’t know where to?” She’s still frantically scrolling down her phone hoping for inspiration. “Oh I think it must be Sundance headquarters. I’ve got to meet my publicist.”
Me – Abandon hope and let the bus driver deal with her.
BH – gets on the bus and enters a lengthy discussion with the very patient bus driver. Most of the skiers on the bus would be ready to fall about laughing, if it wasn’t for the fact that this is delaying them getting onto the mountain.

Never mind we’ve two weeks of this, but the good news is most of the Sundance Pretty People don’t ski so it should be quiet on the mountain. 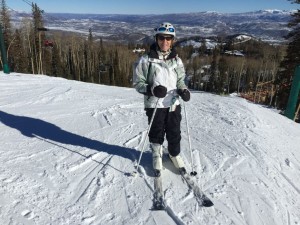 On the slopes with the lazy holiday brigade at 10:00. A few runs; coffee; a few runs. Work on keeping my legs apart (not good advice to any daughters); leaning forward, into my boots; holding poles forward – this one makes me feel, and probably look, like a complete plonker.

Follow up with a Starbucks Clover moment and meet Wendy who’s been down to the outlet stores for some retail therapy. It’d be cheaper if she’d ski.

Government should limit itself to the powers named in the Constitution, which include banning gay marriages and censoring the Internet.

The public has a right to know about Hillary’s cattle trades, but George Bush’s driving record is none of our business.

You support states’ rights, which means Attorney General John Ashcroft can tell states what local voter initiatives they have a right to adopt.

Trade with Cuba is wrong because the country is communist, but trade with China and Vietnam is vital to a spirit of international harmony.

Todays Sundance Bubblehead award goes to the young guy on the bus, who probably wet himself with excitement, as he shouted out “wow there’s that director (name I’d never heard of, but that’s no surprise), his girlfriend tried to dash to the window and wave to her.
Sunday – hot and sunny. 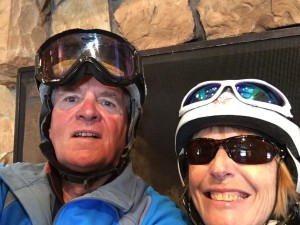 Deer Valley selfie (what a sad doing one of them) by the fire.

Quite a good day. Awesome weather. You get to meet and chat to lots of different people, even snowboarders. Get plenty of ski runs in through the day. Even get to take guest on single run ski tours. Pretty good day.

67 percent of Republicans (and 40 percent of Americans overall) believe that Obama is a socialist.

The belief that Obama is a “domestic enemy” is widely held—a sign of trouble yet to come.

57 percent of Republicans (32 percent overall) believe that Obama is a Muslim.

45 percent of Republicans (25 percent overall) agree with the Birthers in their belief that Obama was “not born in the United States and so is not eligible to be president”.

Sundance Bubblehead Award goes to the young woman who thrust her iPhone in front of the driver, whilst he was driving of course, and asked to be taken there. Poor guy reminded her he was driving and it was difficult to drive and read – much too polite.
Monday – hot and sunny.

Good mornings skiing with Wendy. Did well on her first day. She got 5 runs in and as always she is so much in control, I wish I could be so controlled in my skiing. Amazing how you never forget, just like riding a bike.

Late lunch at Snowpack lodge, except that there’s nothing that Wendy fancies, so it’s just a coffee and home.

Finally don’t you just love the “Right to lifers”. Against abortion.

ALL LIFE IS SACRED.

But, but they’re ok with the death penalty; nuclear weapons; war and weapons.

Of course they’re against any form of gun control.

Next week it’s the turn of the Democrats.

Mayhem and chaos reigns in town. No wonder the buses are all running late during Sundance, they add extra bus stops to save the poor wee Sundance Bubbleheads from having to walk an extra 20 yards to the normal bus stop.
Tuesday – warm and sunny. 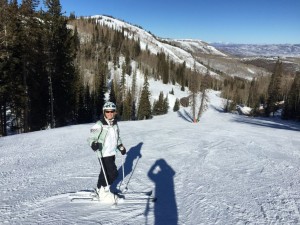 Wendy’s first day out. Note the lack of scumboarders.

Have a lazy start. Another too warm day, not doing the snow any good. Get my 10 runs in, then it’s back home to help out with a trip to the supermarket and better still the liquor store.

In the evening Rick and Lynda come round for dinner, we have a pleasant evening catching up and helping the American wine industry.

Please Chione, bless us with some snow tonight. Hopefully a little more than the half inch forecast.

This town must really think that these Sundance bubble heads have an IQ lower than their shoe size. It seems it needs two lolly pop ladies to help them cross the road without getting run over – do they not realise they’re interfering with natural selection.
This entry was posted in Uncategorized. Bookmark the permalink.