Posted on January 15, 2015 by admin
Wednesday – grey and miserable. 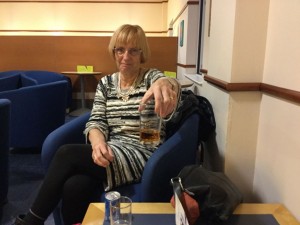 We’re on our way. Wendy just has a we snifter to wash her tablets down.

Well we finally get to escape again. Back “home”, paradise, Park City, for 3 months skiing. My only proper holiday.

I’m not going to say much about the journey. Just fairly typical, 24 hours of misery. Complete with the usual crap from the TSA brigade. However one amazing event, we got through immigration pretty quickly, in fact so quick we then had to wait for our luggage. Wow that’s first. But then the TSA made up for it with their inordinately long queue to screen us yet again even though we’d been done in Manchester and remained airside all that time. Riddle me that! 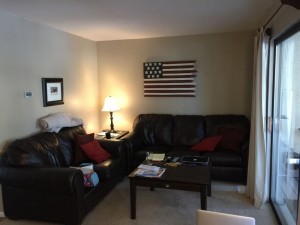 Our home for the next 3 months – lounge.

As this is our 11th year in Park City I think this blog is going to be a tad sparse on photos. It’s mainly a reminder for us of what we did, ready for our dotage. However, rants and corny jokes will not be sacrificed. There’s still plenty of lunacy in the World. Another change is that I will only publish once a week.
Just love airline food hot chicken and cheese roll. Cheese is so hot, it’s like napalm on the tongue.
Thursday – too warm (50F) and sunny. 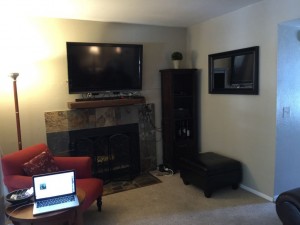 It’s like a glorious spring day here. Too warm for a ski resort in January. Snows a bit sparse so we can ill afford it to be melting. There’s only a 44″ base and they’ve had 73″ snow so far this year.

Up at crack of sparrows. Lavish American breakfast at Squatters. Unpack and sort out. Pick up a free Dirty Chai (scanner is kaput) at Starbucks and Earl Grey for Wendy. Then off for some excitement down at Costco followed by an adrenaline top up at Fresh Market. I manage to escape to Starbucks. Nip around to Carols for afternoon tea and pick up our ski clothes and importantly our ski boots. Our bikes and skis were waiting for us in our garage. 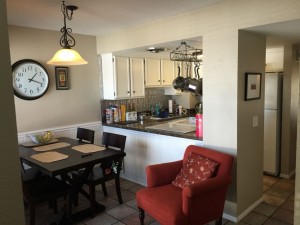 Sadly we don’t receive our winter hosting training until Tuesday, so will have to wait until then for our free season pass.
Friday – warm and sunny again.

I drove up to the plaza. Checked in at the National Ability Centre for volunteering and had a pleasant Dirty Chai. I blame that Eva for introducing me to them.

After lunch we finish off some minor shopping. 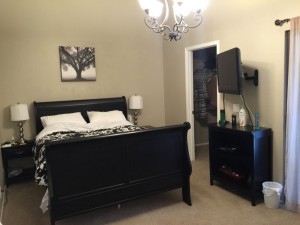 In the evening drop the Hertz mobile off. I go down to the Spur Bar to meet up with the Park City Mountain Sports club and hopefully join. First encounter really worries me. Ask two actual members, if they can point out group leader. They don’t seem to realise they are members of PCMSC, but just think it’s an old folks club. Average age does seem to be mid 50’s. Are they all senile and in their dotage like these two who look like the two old geezers from the Muppet show. Should I really be joining. I’m too young! 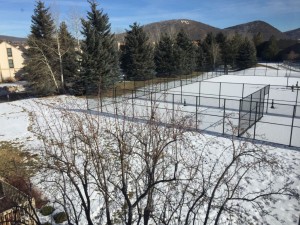 View from 2nd bedroom over the tennis courts, with mountains in the background.

$25 to join and they have lots of ski trips, training and social evenings which sensibly seem to revolve around bars, plenty of Apres Ski and Margaritas. Give it a go.
Now this is something we do need to take seriously. 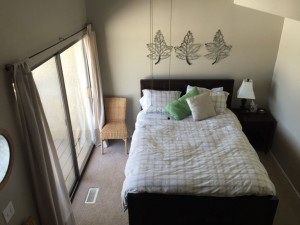 The singularity (when AI exceeds human intelligence) is predicted to be 2029. From then on the machines will be capable of taking over.

As I don’t have my free ski pass I go on the PCMS Club Cross Country Skate skiing course. Real good value. The savings recover the cost of my annual membership.

Wendy’s still not so good. Suffering with catarrh, so she has a restful day in. 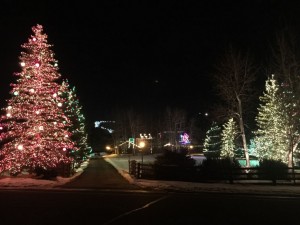 Christmas lights on a house at the top of our drive. Puts the Griswolds to shame. They must have their own nuclear power station. Awesome.

A measly inch of snow overnight, but all great fully received.

Lazy day in as there’s no NAC requirements. By mid afternoon I’ve completed Einsteins Autobiography – a tad disappointing – made a start on 1776 and am ready to climb the walls. Go to a Yoga session at the gym, it’s just 5 minutes away. 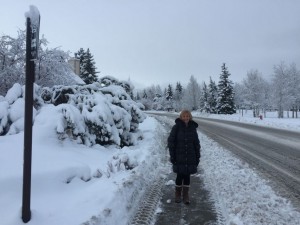 At the bus stop, just 3 minutes away and free transport.

You never see any blobbies doing Yoga, they’re always lithe young things that can bend like pretzels, balanced on one leg. It’s quite an intense session, half of the positions I’ve never done. Quite difficult as I’m skulking on the back row so can hardly hear the complex instructions and my glasses keep falling off so can hardly see. To make matters worse it’s a 90 minute session. Cream crackered by the end of it.
As the Charlie Hebdo massacre settles down in the news I see it’s time for the loony liberal do gooders to slither out of their ivory towers with their usual rhetoric and blame. Yes, it’s nothing to do with fundamentalist islamic nutters. Oh no, as the sound of gunfire fades in France, a nation that cherishes equality must ponder the gap between its ideals and reality. It’s all the French governments fault apparently
Monday – snows all day, thank Chione.

Lazy morning. Then in the afternoon we can’t resist going out in the snow to do some none essential shopping. 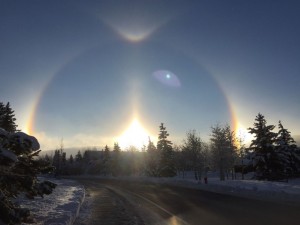 Waiting for the bus. 20″ new snow and multiple rainbows.

I see that media is now blaming “US PENSIONERS” for the crisis in social care and the NHS. Of course it’s nothing what soever to do with a new NHS helpline and GP’s no longer having to provide out of hours cover. Obviously not enough of “us pensioners” are swanning around on cruises. Perhaps the government should provide long term cruises on the NHS, to relieve the pressure on the NHS and social services.
Tuesday – cold (what do you expect it’s a ski resort) and sunny.

Training day. Up to PCMR to receive our mountain host training. Most of it’s quite simple until it comes to the radio’s, complete with 10-20, 10-17 code green resolved, 10-blue, but at least I finally get to say 10-4. This is going to take some getting used to. Get our ski uniform, hats, inner jacket, outer jacket and trousers all by Helly Hensen – quality gear – mind you we’ll need it out there in a howling blizzard. Best of all we each get our free season ski pass (that’s saved us $800 each), on top of which we get a free pass each week for Deer Valley and one for Brighton; 50% off food and drinks; best of all free ski lessons; some discounted guest passes.