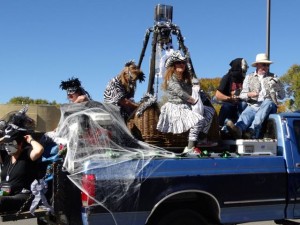 Always a parade. Any excuse. Just love it.

Drive up to Taos for a 2 day road trip to see the balloon festival and visit the mountains up there. Ski resorts but alas no snow yet.

Take the supposedly low road to Taos. My it’s pretty, as we drive alongside the Rio Grande with the trees all flaunting their Autumn Gold foliage.

As always there’s a parade. This time it’s a balloon festival parade. A tad basic but everyone enjoys it and the kids get buckets full of sweets.

Have a wander around the Taos Plaza and a coffee. A pretty town but dirt poor looking.

Out for dinner to a good Mexican restaurant. Good food, hot and spicy. 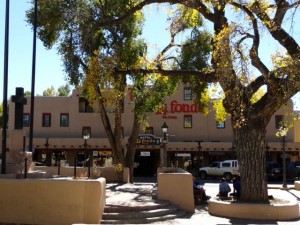 Then we’re off to the Balloomenshow. Where all the balloons are parked and lit up by there propane burners. Do a range of different lighting effects from all on, to twinkles to waves. Pictures tell the story.

Usual hotel chain looks like the local doss house, so we decided to move up market a tad and stay at a Hamilton Inn. Spare no expense, it’s only frittering away the kids inheritance. 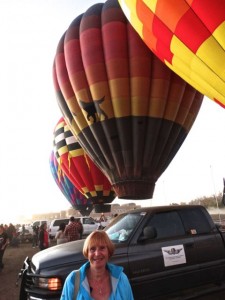 We’re watching TV in bed, yes crap American TV with their 58th repeat of “Keeping Up Appearances”, when all of a sudden the headboard starts shaking, like a dog passing hammer handles. My god it’s an earthquake! But no the grounds not shaking, nor are the walls or anything else in the room, just the headboard. Hang on sounds of “enjoyment” from next door. The headboards in this desert gin place somehow linked, like photon entanglement me thinks.

Never mind first thing in the morning I’ll have a word with our neighbours. Should be easy enough to identify her, she’ll no doubt have bruises and splinters on top of her head and probably be walking bow legged.

In future no doubt we’ll get noise cancelling headphones handed out on arrival and have to whisper in the room for fear of being overheard. 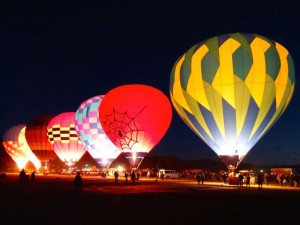 Up at the crack of sparrows, 06:30, for an early breakfast and then off to the mass ascension. Not a religious festival thank Chione, but 30 – 50 balloons ascending heavenwards. A lot of people there and a lot of inactivity from the balloon crews. Turns out the winds in the wrong direction and they can’t fly from there as they’ll go straight into the mountains. Is there a plan B, I ask well some of them may drive South and set off from various locations and some may stay here and just inflate their gallons. Chaos. No plan B. Apparently it’s up to the individual crews. It’s 3P’s if you ask me – Piss Poor Planning. You can’t control the weather but you would have thought they would have a plan B ascension site and rules of entry were such that if you can’t take off from Plan A site then you go to plan B site. But no it’s just chaos. 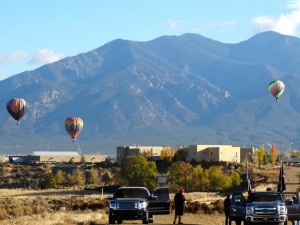 Manage to find 5 balloons in one area taking off. Very disappointing.

Then we’re off to Taos Pueblo. A World Heritage site of Pueblo Indian houses dating back over a 1,000 years. Interesting guided tour and then wander around. By the very nature of the place it’s dirt poor. Dust everywhere. Only about 3 families live in the Pueblo itself, with no electricity just propane for heat and light. Can you imagine that Wendy no East Enders. Worse still no Internet. I wonder why youngsters are drifting away?

It’s a typical American Indian place; scrawny dogs a wandering everywhere; plenty of rubbish tips; the American equivalent of a gypsy encampment. The one difference from past reservations is that this place is on some lovely land rather than scrub desert that no even a rattlesnake would want to live in.

A late lunch back in the Taos Plaza and then get the delight of exploring all the shops we missed yesterday. 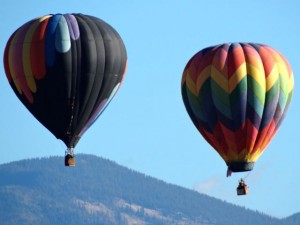 Best of some bad planning. Where’s the other 28?

Subway for dinner, how good is that, along with a bottle of Pinot Noir and 3 Homelands on TV in a row. Now we’re ahead of the UK. Anyone want to know what happens, email me. 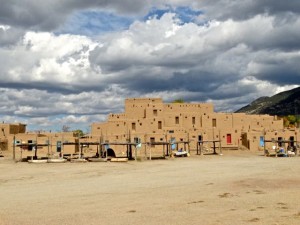 Taos Pueblo. Certainly not high on anyones desirable properties list and no entries in “Home & Garden”.

Leave hotel to do the Enchanted Circle drive, supposedly a scenic highway, or as Wendy called it the boring circle. Yes a couple of nice bits through the mountains, but we’re a bit over faced with mountains these days, so are not easily impressed. Most of it through scrub land. Have a side trip up to Taos ski area. No way I could give that a miss. Well it may be one of the few resorts in Western USA that I’ve not skied but I certainly won’t be suffering 3 airports to come to it.

Then take another scenic highway, “The High Road to Taos” back down to Sante Fe. Now this is more like it. Both Low and High roads are impressive. 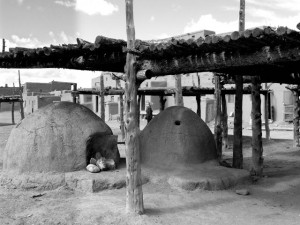 Stop at a Starbucks by way of a change. Get my free shots after having to prove to all and sundry, including the so called manager, that gold members are entitled to free shots. Just goes to show how dilatory they are. My UK Starbuck app gives me free shots or free syrups. That’s what it says so thats what I thrust under their noses. In the USA a gold member gets free coffee top ups. I get the best of both Worlds, when I want extra shots or syrup I show the UK app to them, if I want extra coffee then I just ask for a top up as a gold member. Worldwide Company with parochial think, serves the greedy gnomes in their marketing department right. 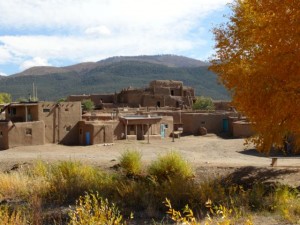 More Taos Pueblo – North side. Is this where the wealthy live?

Lazy start to the day then a 15 mile bike ride down Tramway to a Starbucks and back. While Wendy gets her weekly supermarket fix. 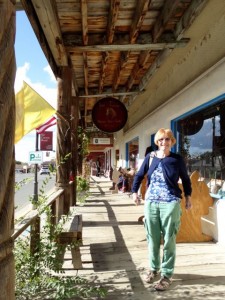 Wendy in Taos at the end of our second shopping minder.

After lunch we’re off down to Lids to buy Kurt a baseball cap he wants – kids. What a crap Company. Not got it, but you can order it will take up to 14 working days – they could make to order in outer Mongolia quicker than that. Or for ONLY an extra $5 we can have it express shipped, only 5 working days – do they still use mule trains for shipping in this country. I can feel an Amazon moment coming on with a swift exit left, Wendy’s a tad more patient. 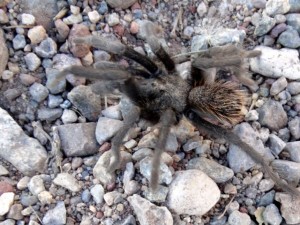 Then browse around the Apple store and view the new iPad Air 2. So thin and light and fast.

Finally end up at Wholefoods for some nice salads and foods for tea. Very disappointing, this place really seems to vary day by day as to choice. 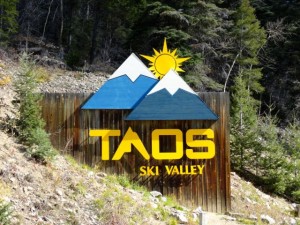 This is about as close as I’ll ever come to skiing here. 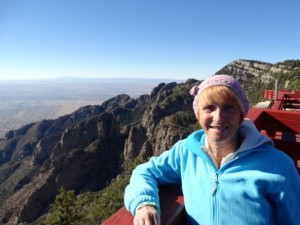 Wendy at the top of Sandia Peak.

Very lazy and frustrating morning as I sort out iPad / iPhone upgrades to iOS8, add VPN’s and upgrade Macbook to Yosemite. By the end of the morning I need a new keyboard as the keys to my password are worn down to the metal and I’m desperately in need of some alcohol. Apple seem to be catching the Microsoft virus with too many upgrade / password / technical steps. 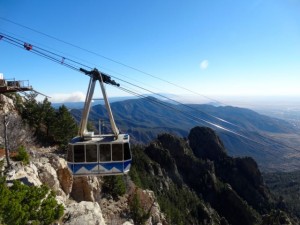 Sandia Peak tramway. Being tight we drove up and walked across Sandia Crest.

restaurant and then back. Awesomely frightening views over Albuquerque and New Mexico from 10,500 feet. I break out in a cold sweat just looking over the edge. Altitude really gets to you and makes even a short stroll quite an aerobic workout. Well worth the effort though. 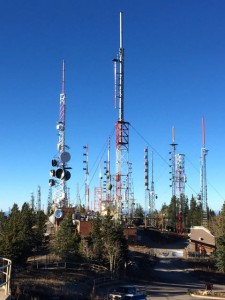 Apple such an environmentally conscientious company doesn’t worry too much about this eyesore on a mountain top. Sadly, nor does this nerd.

Call in for some gas (petrol), think it’s cheaper than some of the bottled waters, at under $3 a gallon. Anyway go to pump tyres up to placate yellow tyre warning light, how neat is that. $1 to pump your tyres. It says there’s a gauge on the end of the airline. They lie. No gauge. Apparently here in the land of plenty you have to provide your own. Care to guess why? Well it’s certainly not in an attempt at good customer service. No, my theory is they’re frightened of being sued.

At times you do get the feeling you’re in a 3rd World country.