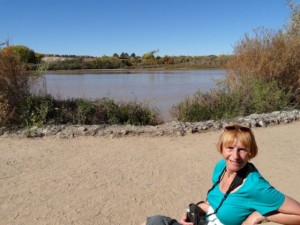 Lunch by the Rio Grande.

Off down to the Rio Grande Nature centre for a birding stroll. Totally the wrong time of day as we spent most of the morning surfing, knitting and supping coffee. A pleasant enough place, but birds were as rare as a politician with some common sense.
Anyone remember Dave Allen? Here’s one of his superb comedy sketches on religion:
Try to book in the Olive Garden for tomorrow night. I detest the queueing that Americans seem to enjoy when going out to dinner. 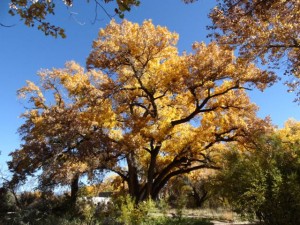 But you can’t book a table unless there’s 8 of you. We can take your name, so when you arrive you go to the front of the queue that we like to have in order to piss off our customers. Hmm… Customer service strikes again. My delusion that I’m a customer has flared up again – don’t worry it’s not catching and non-aggressive, I have some cream I can rub on my head to medicate it. I realise it would be much to complicated to offer a reservation service, you might have to use some initiative and intelligence.

For all you Breaking Bad fans we did a DIY BB tour around Albuquerque. Yes, we suffered it. How sad is that! Sadder than watching daytime TV all day and every Soap omnibus going. Feel like a right pair of geeks. 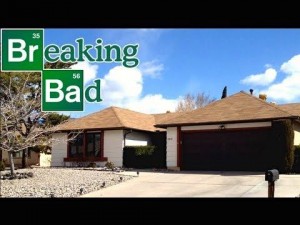 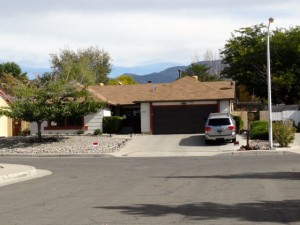 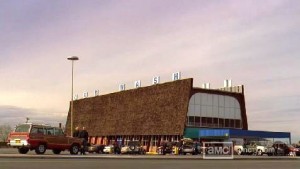 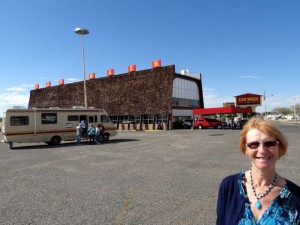 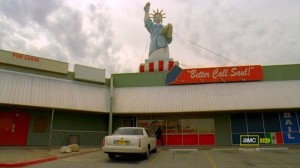 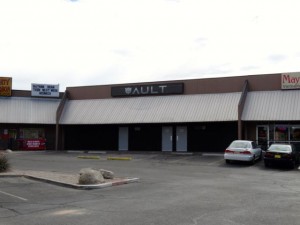 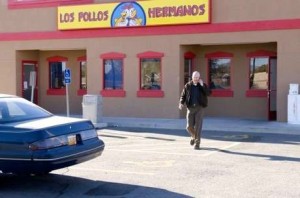 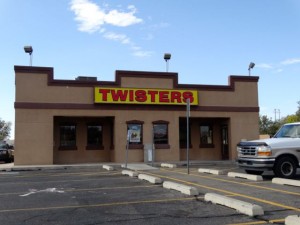 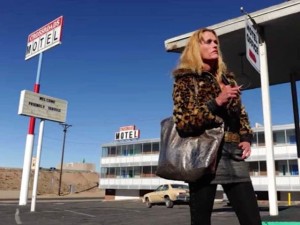 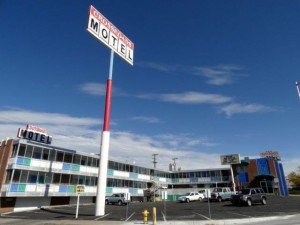 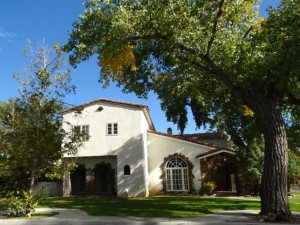 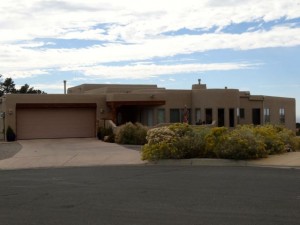 There’s many web sites showing locations of the various sets used, so off we went. Two hours of lunacy, but at least it gave us a good tour around ABQ. Even bumped into the official bus tour at a few locations and looking on the bright side we saved ourselves $150 by doing it ourselves.

In the evening we go out to the Olive Garden for dinner. It was as good as ever and so handy, could almost walk. Eating their Steak Gorgonzola Alfredo makes me think I’m in Flying Spaghetti Monster heaven.

Here’s a more modern comedian. Ricky Gervais does the Bible: 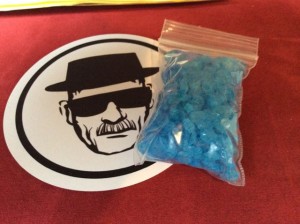 Some blue meths. I think!

Don’t I just love the hype around Halloween. Amazing a pagan festival turned into a major marketing rip off by the Mighty Marketing Moguls. It’s such a major event over here.

So lets get it straight, people spend all year hammering it into their kids “DON’t TALK TO STRANGERS” etc. Then on this pagan festival night, they wait until it’s dark and send their kids out to beg for sweets off total strangers. “Come in dearie I’ve a big surprise for you” – hmmm..

Of course there are alternatives to avoid this rampant madness:
1 Go out for a meal – our preferred option.
2 Sit in the dark all evening with the doors and windows locked – my Mothers option as this used to frighten her.
3 Answer the door with a shotgun.
4 Borrow a class 1 attack dog.
5 Stick a plague flag on your front door. 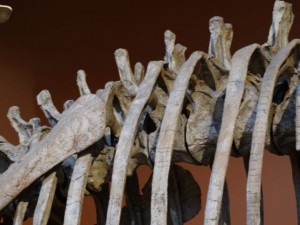 Just what most of our politicians need – backbone.

Big danger is ending up with your house covered in Yellow spray can graffiti. To ensure no property damage to our home exchange we bought some sweets. Bad news – we now have to live off kit-Kats and Mounds for the rest of the year. No one came.

What’s even more disturbing in this supposed Christian country they’ll wish you a “Happy Halloween” (pagan festival), yet daren’t wish you a merry Christams, instead resort to the PC “Happy holiday”.

Even bigger worry is that this insidious virus is spreading to the UK as the greed merchants in marketing see an opportunity to exploit the numpties. 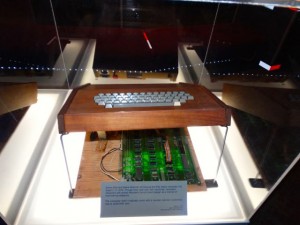 Apple 1 computer from the Homebrew club.

Have a pleasant 12 mile bike ride in the morning. Great way to explore Albuquerque. Even if I did get lost.

After lunch set off to visit the Indian Pueblo museum. Wendy pops in to check times of Indian dancers and comes out totally pissed off by the receptionist. Apparently the rudest one she’s ever encountered. Of course in England we have a cure for this, It’s called a brown envelope, which would contain a P45 – equivalent of what I believe the Americans call a pink slip. In my view it should be doled out not only to the receptionist, but more importantly to the half wit who employed her. Why are there so many rude, unfriendly and inappropriate people employed in customer facing roles. You just have to send in a few mystery shoppers or even talk to these people to realise that they’re about as friendly as a grizzly with toothache. 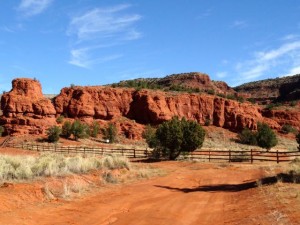 Instead we go to the Natural History museum. Wow what an impressive museum. I’m not usually that impressed with Natural History Museums but this one was the exception. Good to see the volunteer docents come out and speak to you and explain what they were doing and the various exhibits. Best of all was an exhibition of computing through the ages. Plenty of Apple equipment, including an early apple one computer from the homebrew computer club. Whilst I could relate to most of the equipment on display it was also a sad reminder of our old I am.
If builders built buildings the way programmers wrote programs, then the first woodpecker that came along would destroy civilization. ~One of Murphy’s Laws of Technology.
Sunday – warm and sunny. 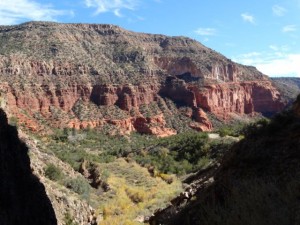 Up at the crack of sparrows for an early morning organised Birdwalk down at the Rio Grande state park. Well worth getting up so early, seen about 30 different varieties of birds as well as a porcupine resting in a tree, I didn’t know they could climb, and a coyote strolling across a field.

In the afternoon we spend in as there is rain forecast. Sure enough it does rain, and thunder and lightning. Actually it is quite refreshing to spend an afternoon relaxing in the house. Makes quite a pleasant change and allows me to get SQL’ing done. 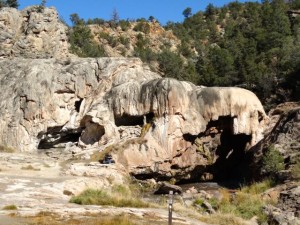 Up early and off up the Jemez Mountain trail. What a stunning drive through the mountains, makes up for the paucity of the so called Enchanted Circle drive. This is not the least bit boring. 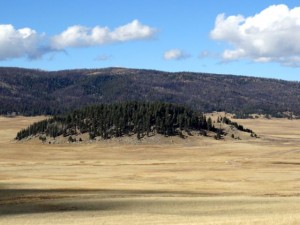 Call in at all the places on the way up the Jemez Mountain Trail road. Have lunch overlooking Battleship Rock. A very enjoyable road trip. One of the nicest drives ever.

Finally get to our hotel. A Hampton Inn supposedly in Los Alamos. But no it’s 13 miles away in White Rock. Yes, according to the excellent receptionist a lot of customers are annoyed by this outright deception. What have Hilton done about it nothing. No they’d rather go on bracing there customers off. Well good news is I vote with my feet, cancel the booking and go to the Comfort Inn in Los Alamos. Well Mr Hampton that’s two Hampton Inns that have let me down in the past 7 days. One more strike and you’re out. I’ll take great delight in cutting my loyalty card up. 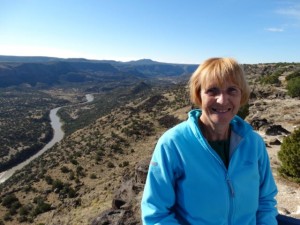 Dinner at the Blue Window restaurant. All very pleasant. It seems that Los Alamos is one of the more wealthier towns in New Mexico due to the Labs there employing over 10,000 people. You can tell it’s more up market, for a small town it even has a Starbucks and a very classy Smiths supermarket.
To get our green card we need to ditch our bad attitude to tipping.
Tuesday – cool and sunny. 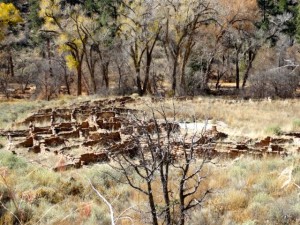 Here we are in PO box 1663, also known as Los Alamos, source of the Manhattan project to develop a nuclear bomb. During the 2nd World war post was sent to PO Box 1663 and this town was a secret.

Visit the Bradbury science museum. A great museum that explains what still goes on at Los Alamos, well some of it at least. I could spend all day here, but not really Wendy’s cup of tea. 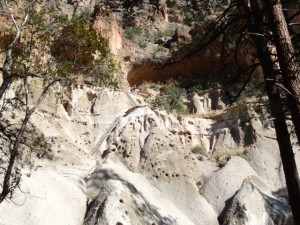 As we drive into town the main highway passes through the massive laboratory complex. All cars are stopped, subject to random search and have to produce photo ID – apparently imposed since 9/11. Of course we don’t have our passport with us, so I show them my paper driving license along with loose photograph that I slipped in their to keep “them” happy. Sometimes the photos even on a slant and is obviously not an integral part of the license. I just love it – see picture. This never fails to fool the numpties. All part of the jobsworth approach to life. Enough to drive a wooden Indian crazy. One of these days I’m really tempted to use that fake Breaking Bad (Walter White ID) just to explore the boundaries of lunacy. 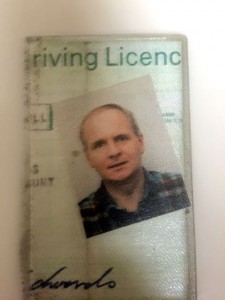 My paper driving license complete with loose picture to fool the gullible. 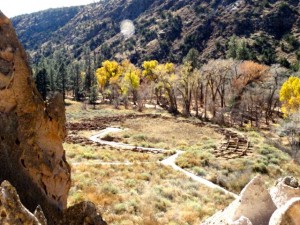 This place is awesome. Has a pleasant 2 mile walk amongst the 9th to 12th century ancient pueblo cliff dwelling. You can even climb ladders into them. Heights are not really my cup of tea, especially when there’s no safety harness and I’ve never received any H&S working at heights training. But hey, ho, I update my will and go for it. What’s the worse that can happen, I die or I stain my underwear. Signs of wood worm in some of the rungs is a tad off putting. I do hope someones wiped down these rungs with antiseptic!

One things for certain those Indians must have been fit, up and down those ladders, and judging by the 1 foot square hole in the roof that represents their front door, their certainly wasn’t an obesity problem. Blobbies would have to stay outside and freeze to death. 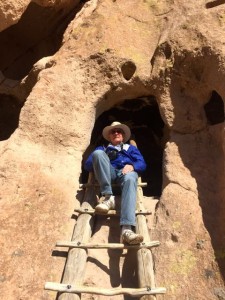 What a great day and to top it off, we drive back down scenic Highway 4 and call in at Jemez Falls for a quick photo. Get back to Albuquerque after dark. Now I know we’re in a third World country. No street lighting, no cats eyes and drivers behind you who seem to change lanes faster than a bee stung stallion and seem determined to crawl up my tail pipe. Makes driving at night harder than trying to stick a wet noodle in a wildcat’s ass.

Call in at WholeFoods, also commonly know as WholePaypacket for a take away dinner. I have a Burrito Subway style and Wendy goes for a stir fry, both freshly made.

Don’t worry I suspect I’m already on the NRA’s hit list and given their way I’d go the way of Piers Morgan. 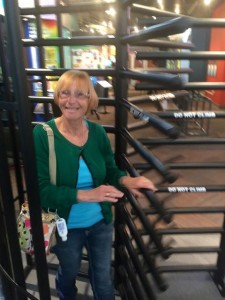 Just love the conversations you have with all these friendly Americans. A common theme they all seem to come up with is “well unlike you guys, we don’t really have any history”. And yes, when you visit towns and they have an historic quarter that all of 40 years old you can start to believe it. What they seem to forget is the Indians that lived here thousands of years ago, mind you they probably rather forget it as it really is part of their “bad past”.
This entry was posted in Uncategorized. Bookmark the permalink.