20130617 – Pilgrimage to Step Over and Wade the Mississippi Finally Over

Monday – warm with sun and clouds. 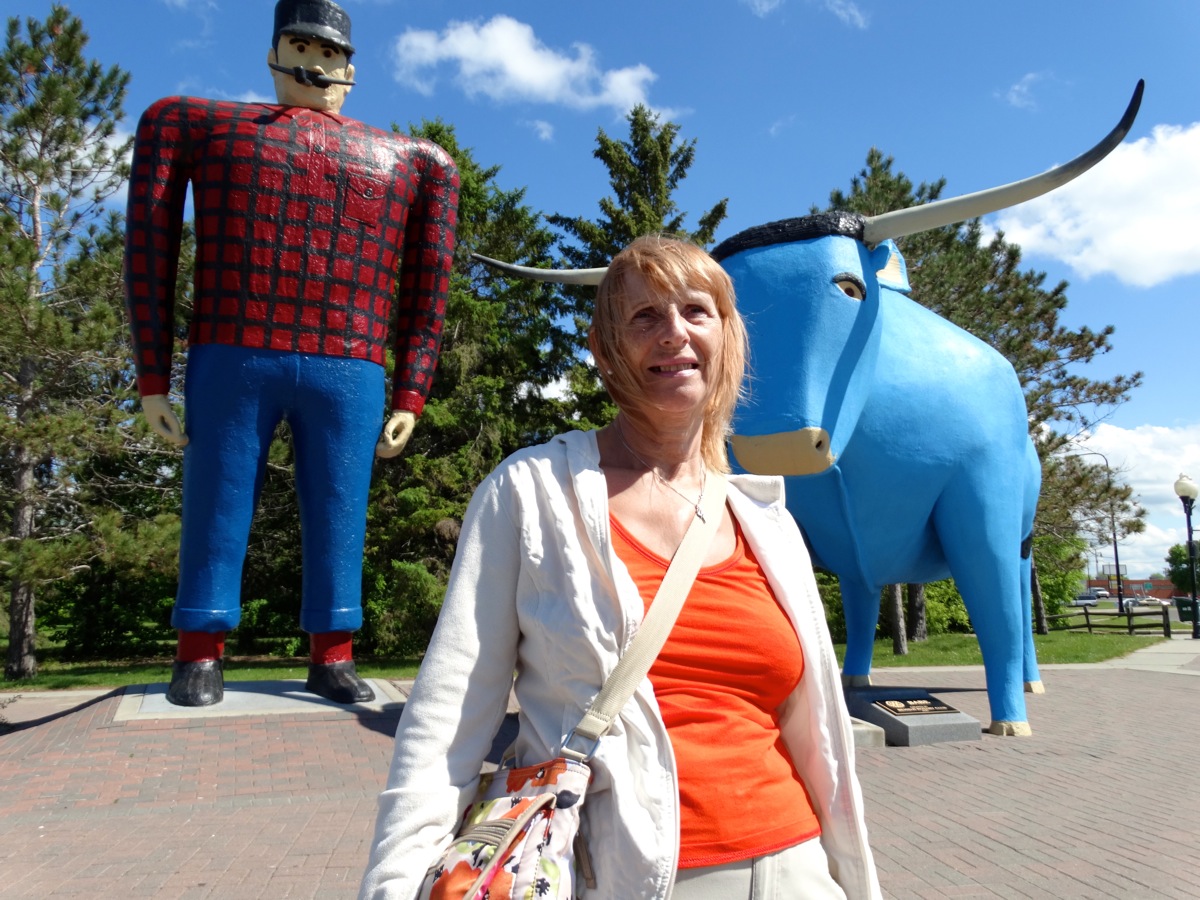 Up at the crack o sparrows ready for a long drive up to Lake Itasca – the source of the Mighty Mississippi.

By the time we get up there it very cloudy so we decide to drive onto our hotel in Bemidji, explore that and do Itasca tomorrow.

Quality Inn Hotel is a disaster. Typical Wifi doesn’t work. After wasting 20 minutes trying and wearing out 3 pairs of shoes traipsing backwards and forwards to reception. I vote with my feet. 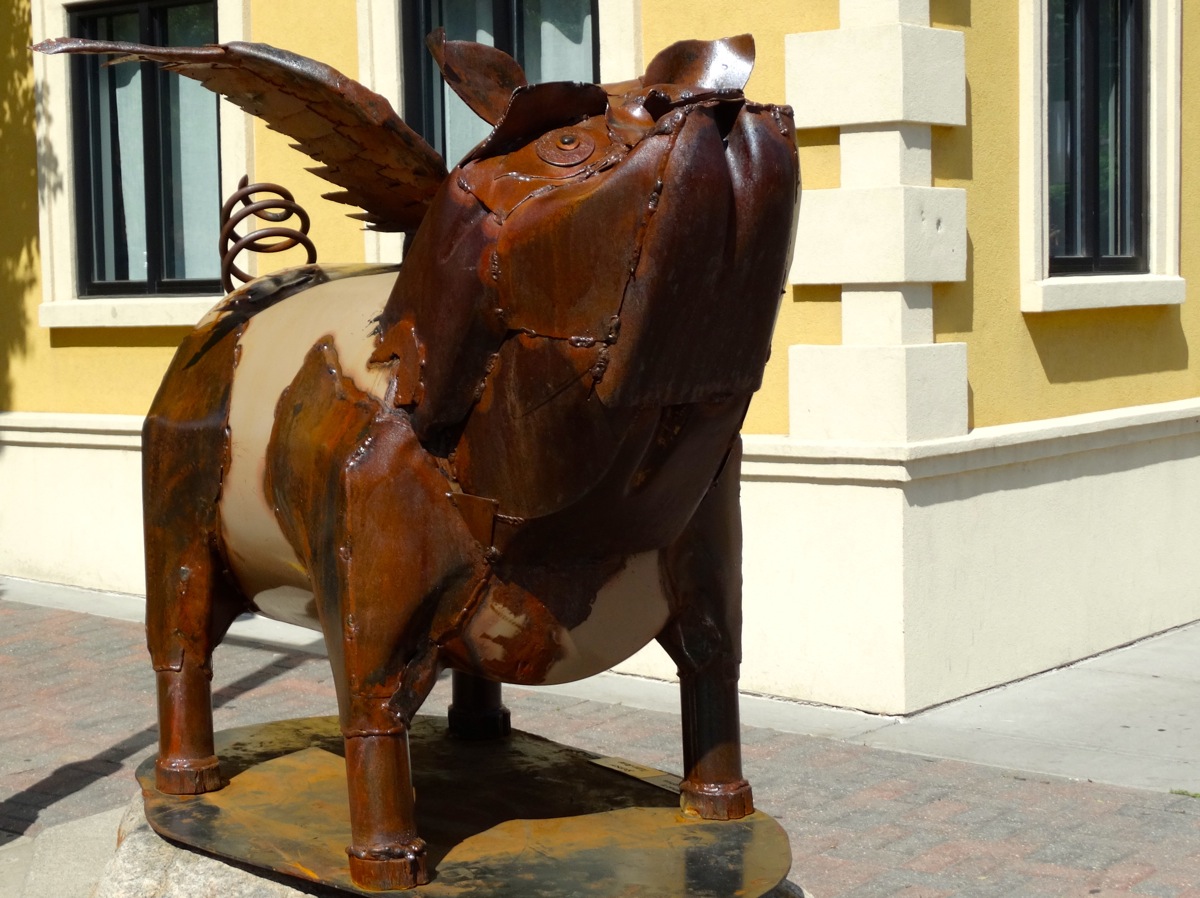 Can you imagine if we had this performance when we wanted to turn a light on! We really are getting fed up with Choice hotels and there lack of attention to detail and poor quality control. Drive down to the Hampton Inn to try them out, a tad more expensive but wifi works and hotel is lovely, right on the lake, great rooms and great breakfast. So it looks like Hilton Honors chain may be the new chain to go with. Hampton Inn – a better way to fritter your kids inheritance.

Have a walk around downtown Bemidji. Pleasant little town but not really much there. Lake front very nice and they do have some 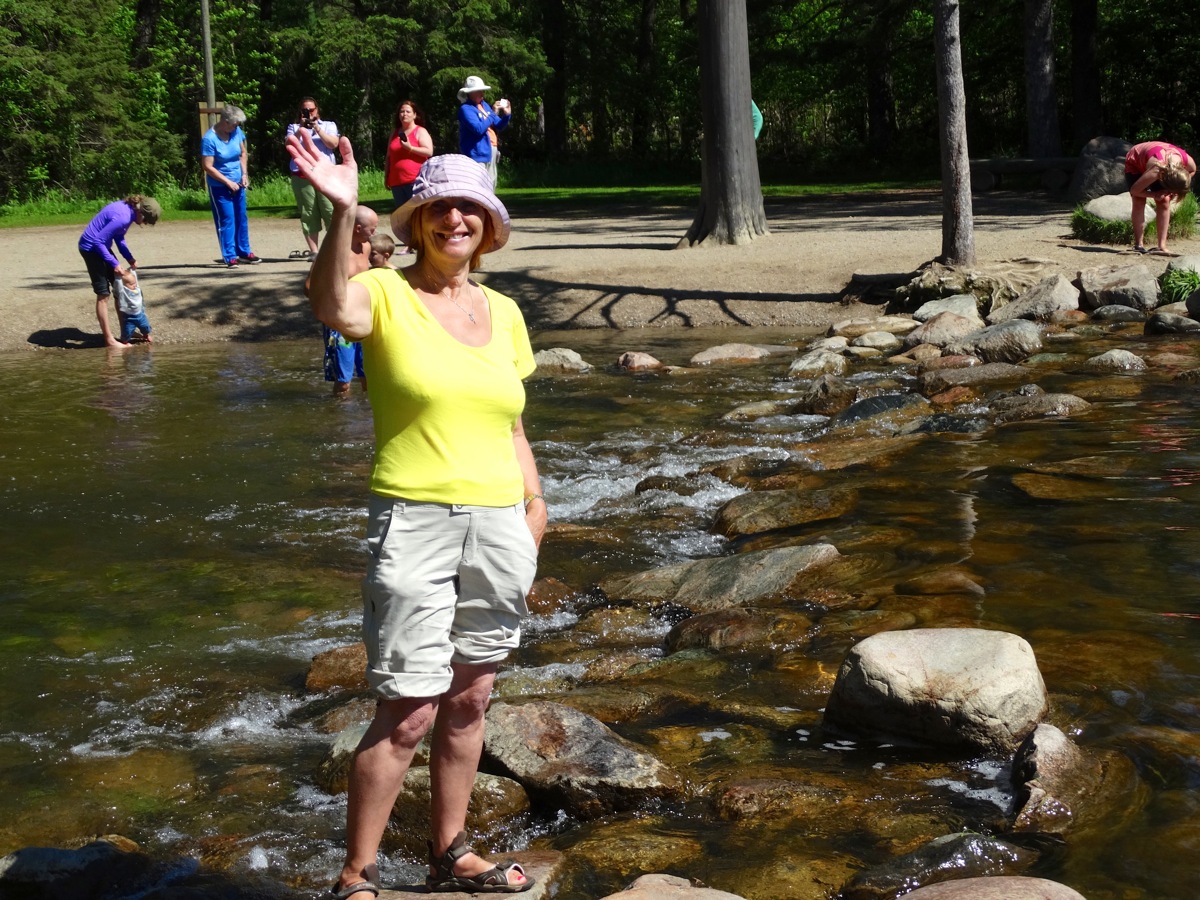 lovely sculptures around the place.

And to remind me of good old Lancashire todays saying are:

“Thick enough t’chowk a donkey”  (Thick enough to choke a donkey) -A reference to a wad of notes in a rich mans wallet.

“Tha meks a betta doower than a winda” (You make a better door than a window) – You are obstructing my view (usually the TV). 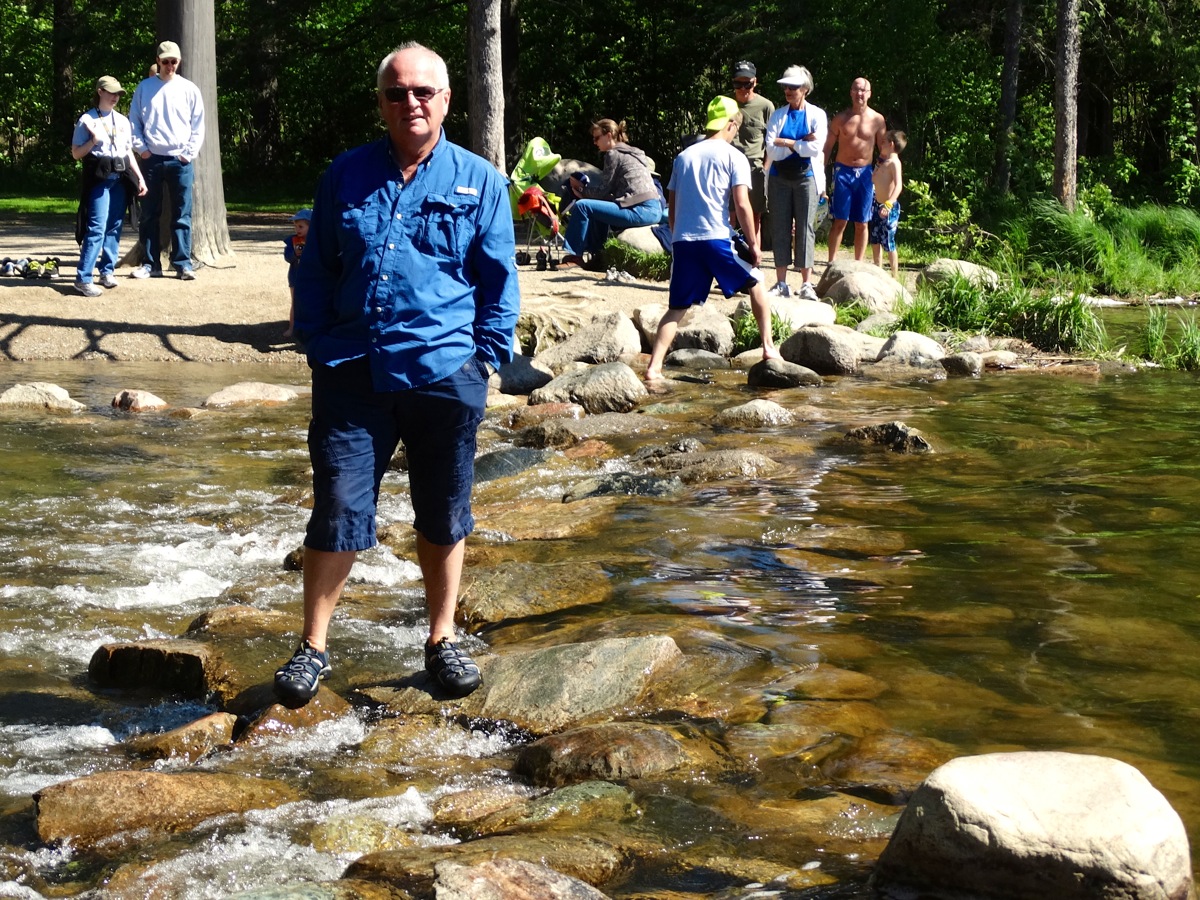 Great breakfast. Then it’s off to Lake Itasca and the Headwaters of the Mississippi.

We’re both quite excited as we complete our pilgrimage. I get to step across the Mississippi on the stepping stones as the might river trickles out of Lake Itasca and for good measure also wade across. Wendy wimps out on the stepping stones – they are slippy – but instead, girds her loins, and wades across. And the 3rd alternative is to cross on a log. We made it. Quite a trip. 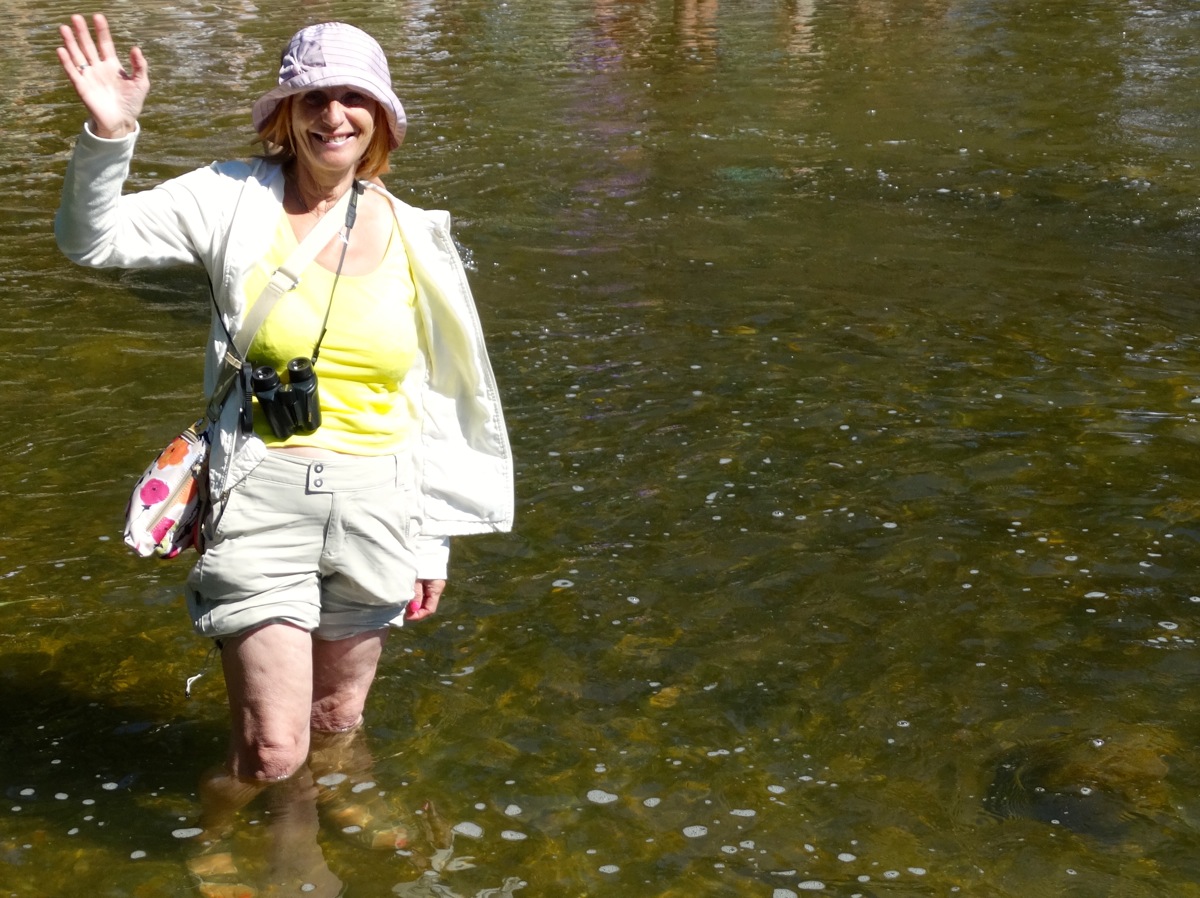 Wendy goes into panic mode when some tells her to check for Leaches – it’s the girl guide in her coming out.

Given the religious zealots in this country I’m amazed there was no millionaire preacher man offering salvation with a total emersion baptism, for a goodly fee of course.

Just think a drop of rain that fell in this lake on the day we arrived in New Orleans still hasn’t travelled all the way down the Mississippi to reach New Orleans yet – it takes 90 days! The Mississippi is the 4th longest rive in the World. How can the Americans cope with it  not being 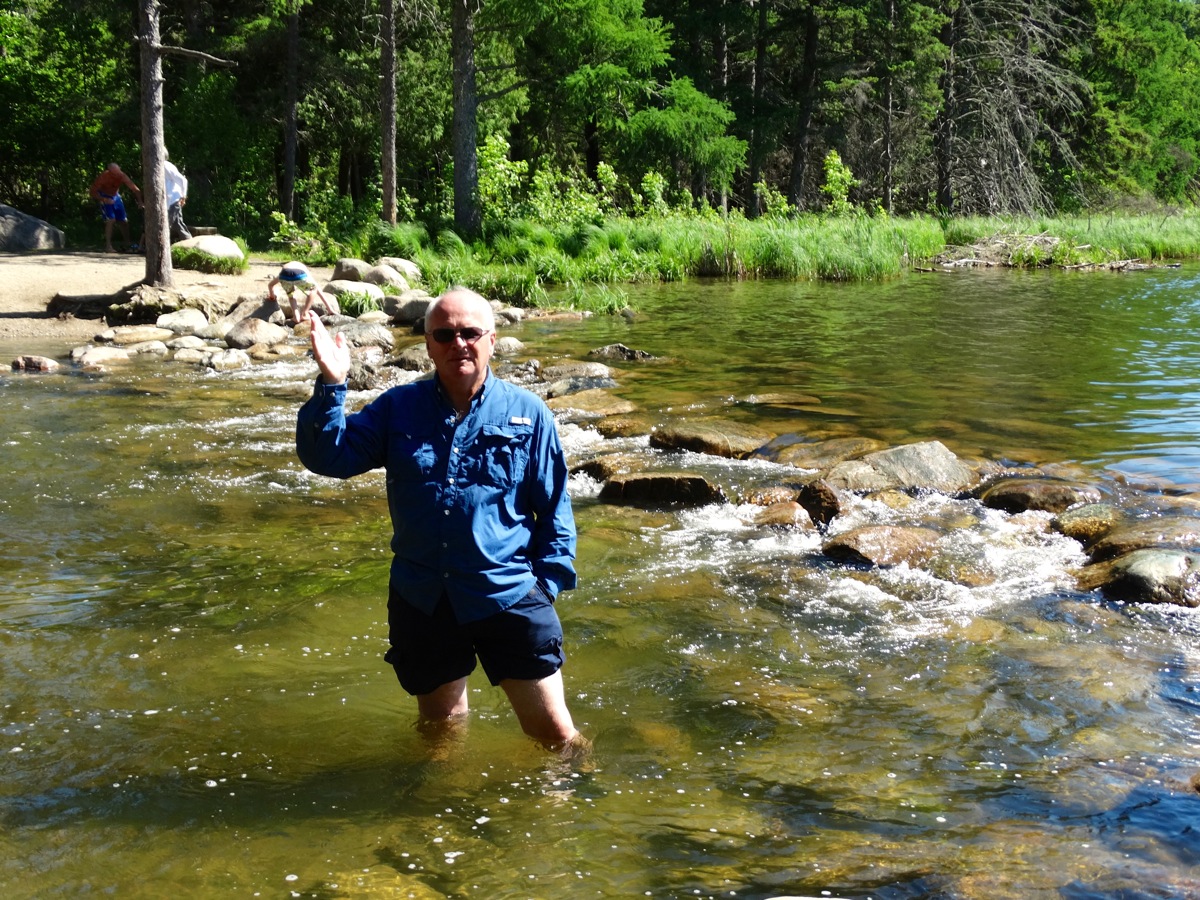 the longest. I’m surprised they haven’t had the Army Corp of Engineers extend it by 400 miles to make it the longest.

Then have a drive around the Lake and discover the State bird on Minnesota – the Mosquito. Yes, we’re todays A La Carte menu for the Mossies. Never seen so many and they have dragon flies the size of small birds – joy.

Now I know I’m always bleating on about blobbies and the obesity epidemic but today has to take the chocolate cake with cream on. How to steer your car with your stomach. This woman was so fat her stomach was oozing all over her steering wheel. Amazing how she managed to get in her seat. Will she ever get out? A truly terrifying site – enough to put you off food for life. 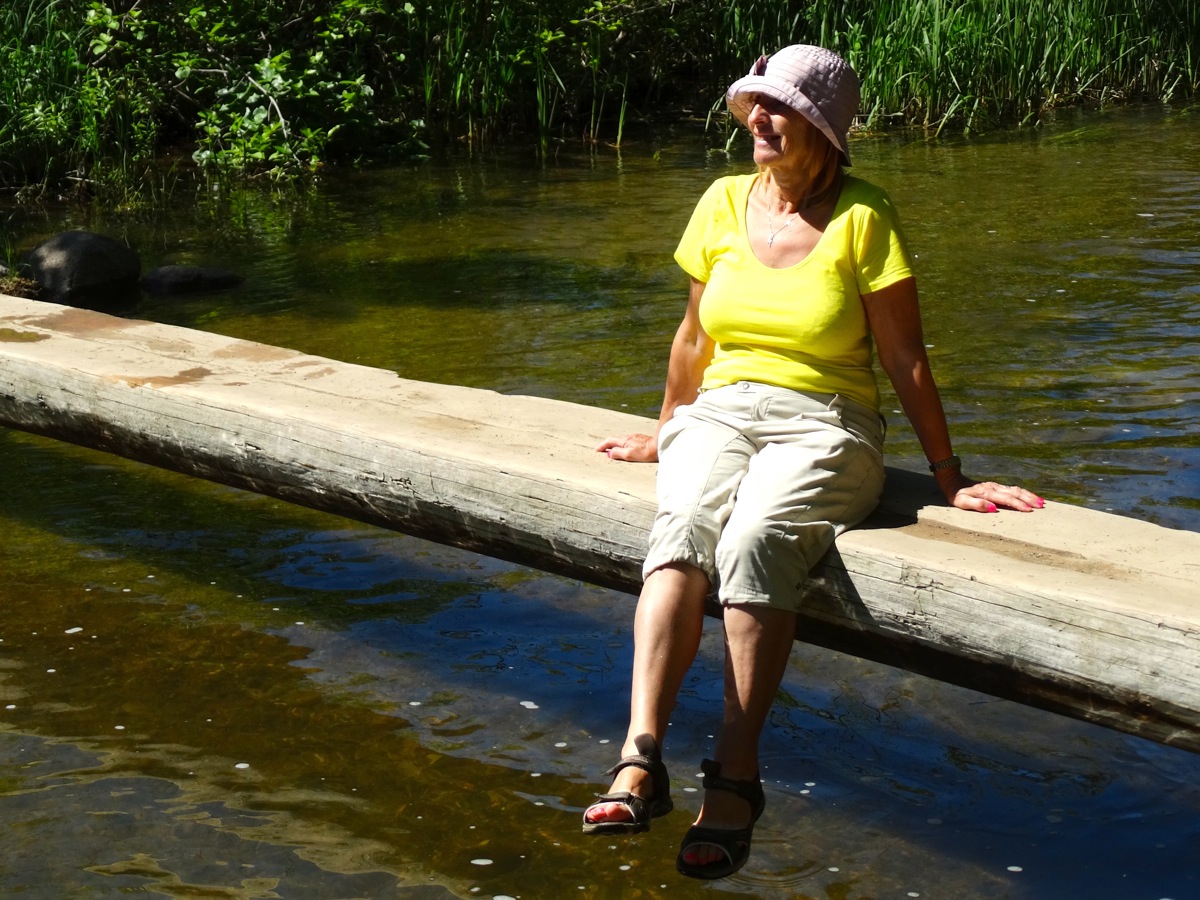 Then it’s the long drive back – 4 hours. Call in at Park Rapids for lunch – the best Corn Beef Rueben’s ever.

Has anyone noticed how a trip to the toilets these day results in deafness for a week as these new jet like hot air machines permeate the eardrums and attempt to shred them – nosier than a scrottie Hells angel on a Harley. While there doing that they spray water droplets around the place like pellets out of an air gun, best thing is to hide in a toilet to avoid 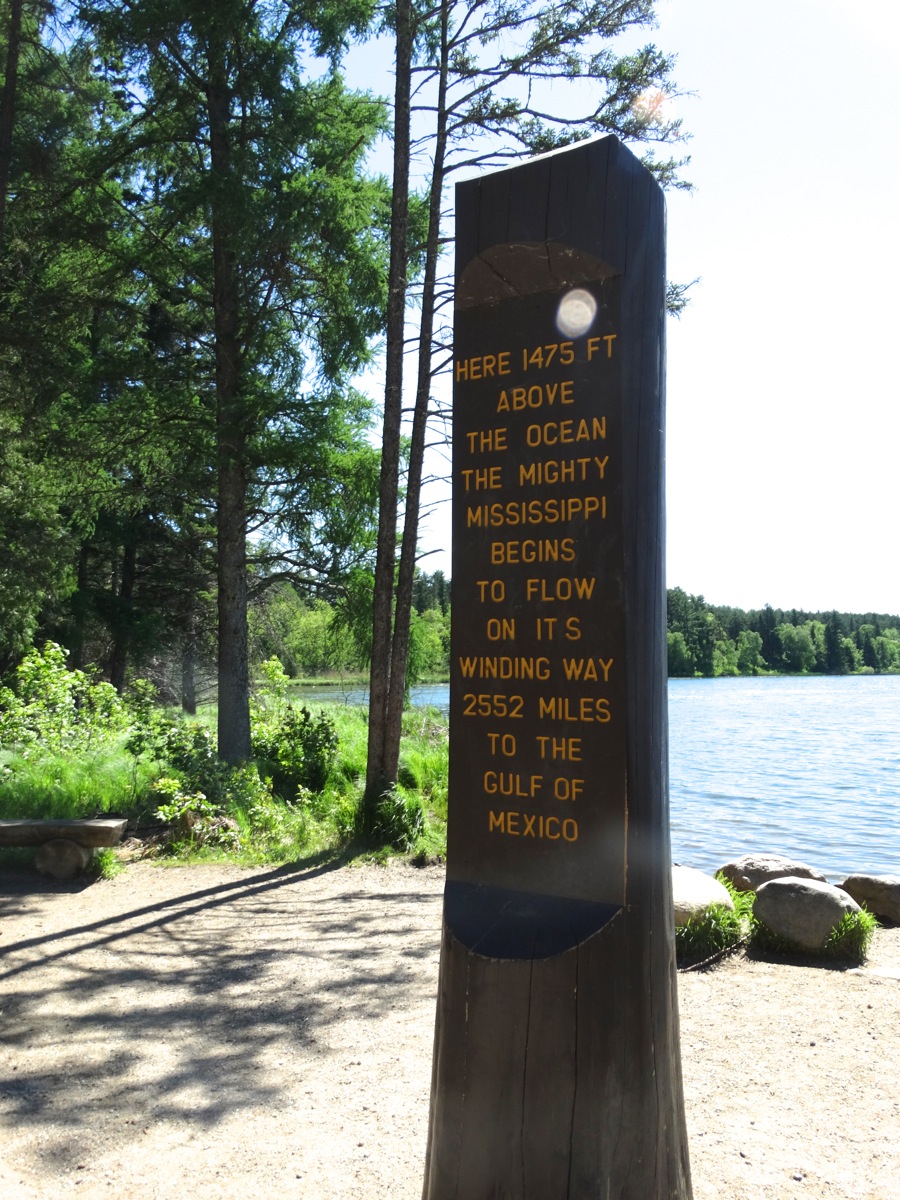 By the time we get back to MPLS it seems we’ve got revenge on the Mossie’s, the front of the car looks like a bloodbath with the splattered little blighters.

From our balcony is a great place for people watching. You get all sorts form the poor old dear struggling along with two walking sticks as she takes her cute little dog for a walk; to fit lithe young females in tight everything, just bouncing along as they jog; Mothers jogging along pushing their brood before them in state of the art 3 wheel tanks; to lazy lumps sauntering along; the best prize has to go to the 50 year old geezer in shorts, teeshirt, 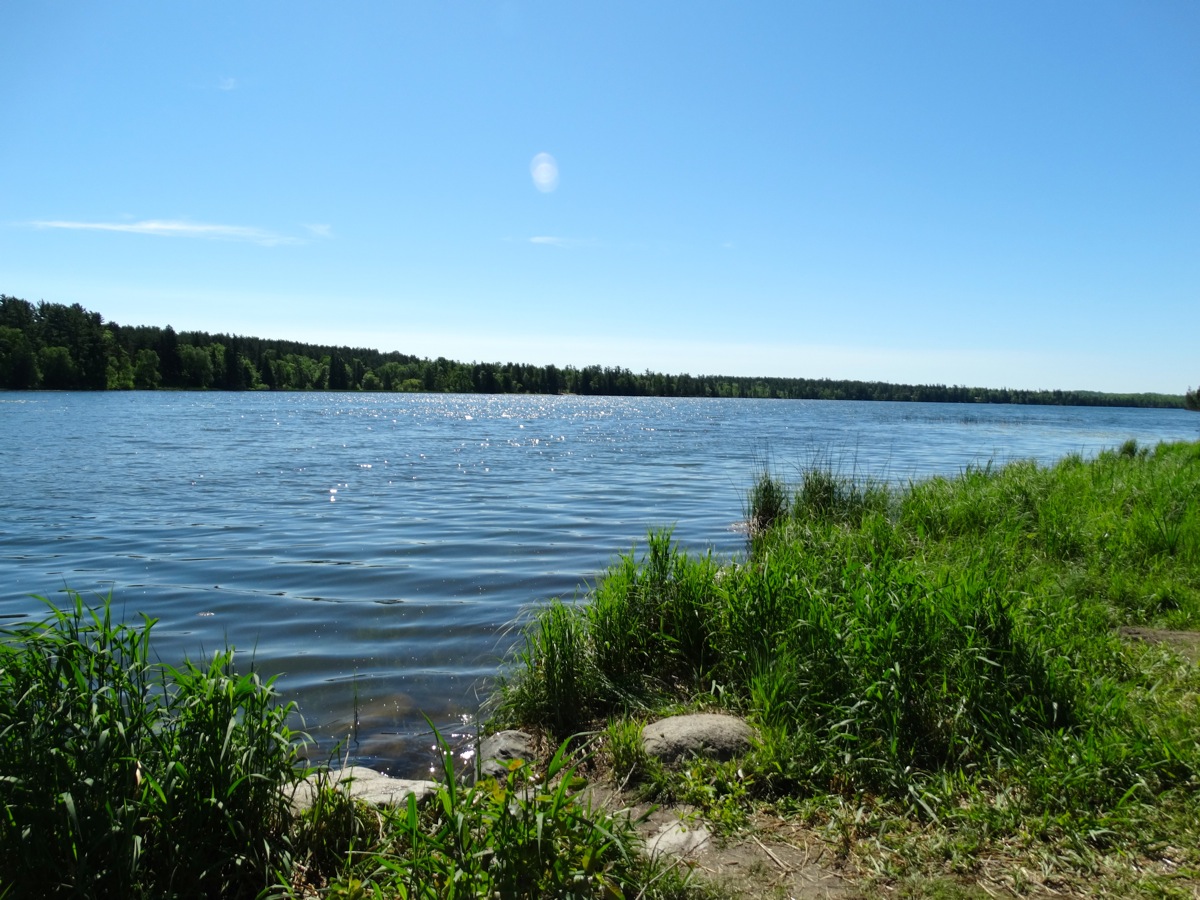 rainers, reading glasses strapped around his head and  walking along at a sprightly pace reading a hard back book, complete with a pen in his hand to annotate it – must be enthralling if he can’t bear to put it down.

“‘Es spat is dummy out” (He’s thrown his dummy out) – He is angry (childish like tantrum). 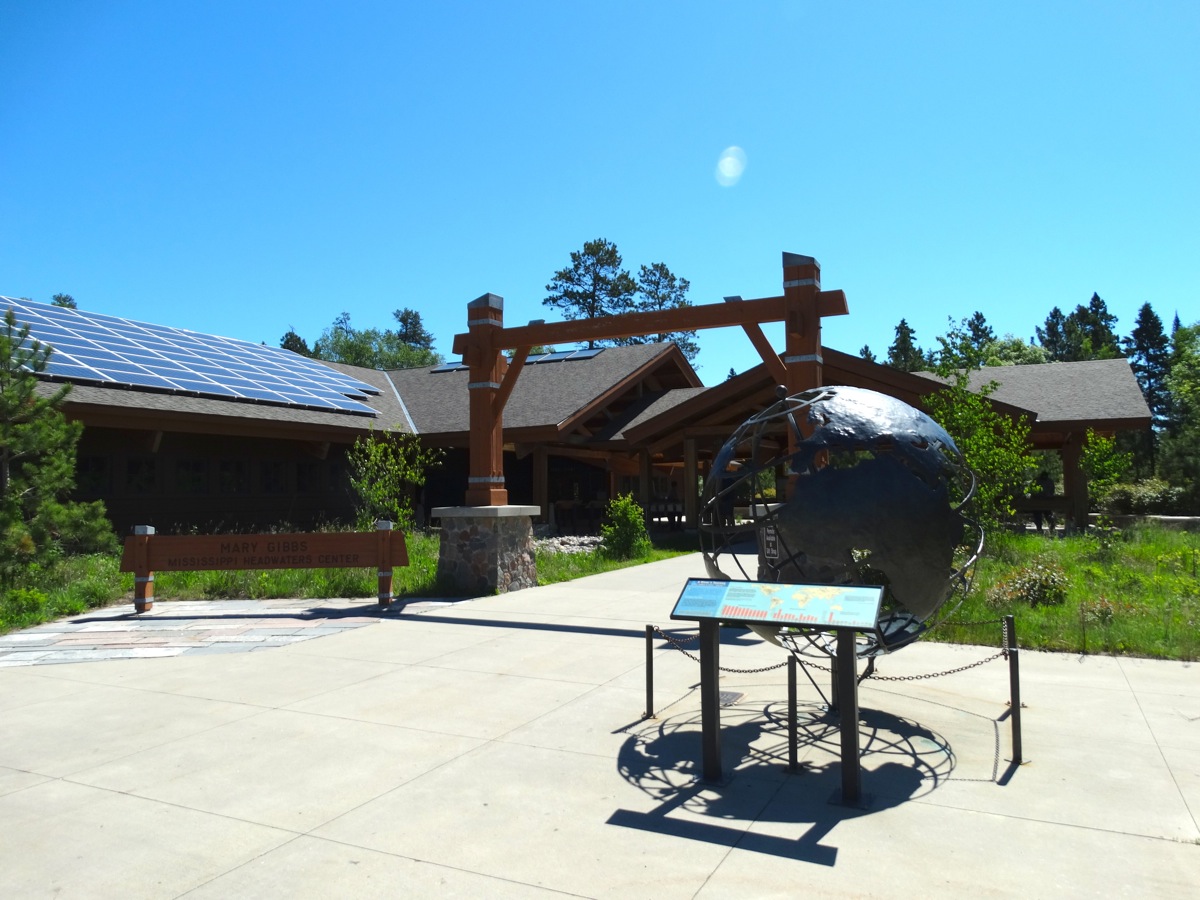 Perhaps there is a god after all:

Even Religious Extremists Can be Done for Blasphemy in Egypt…

An extremist Muslim cleric has received an 11-year suspended sentence for tearing up and burning a Bible. 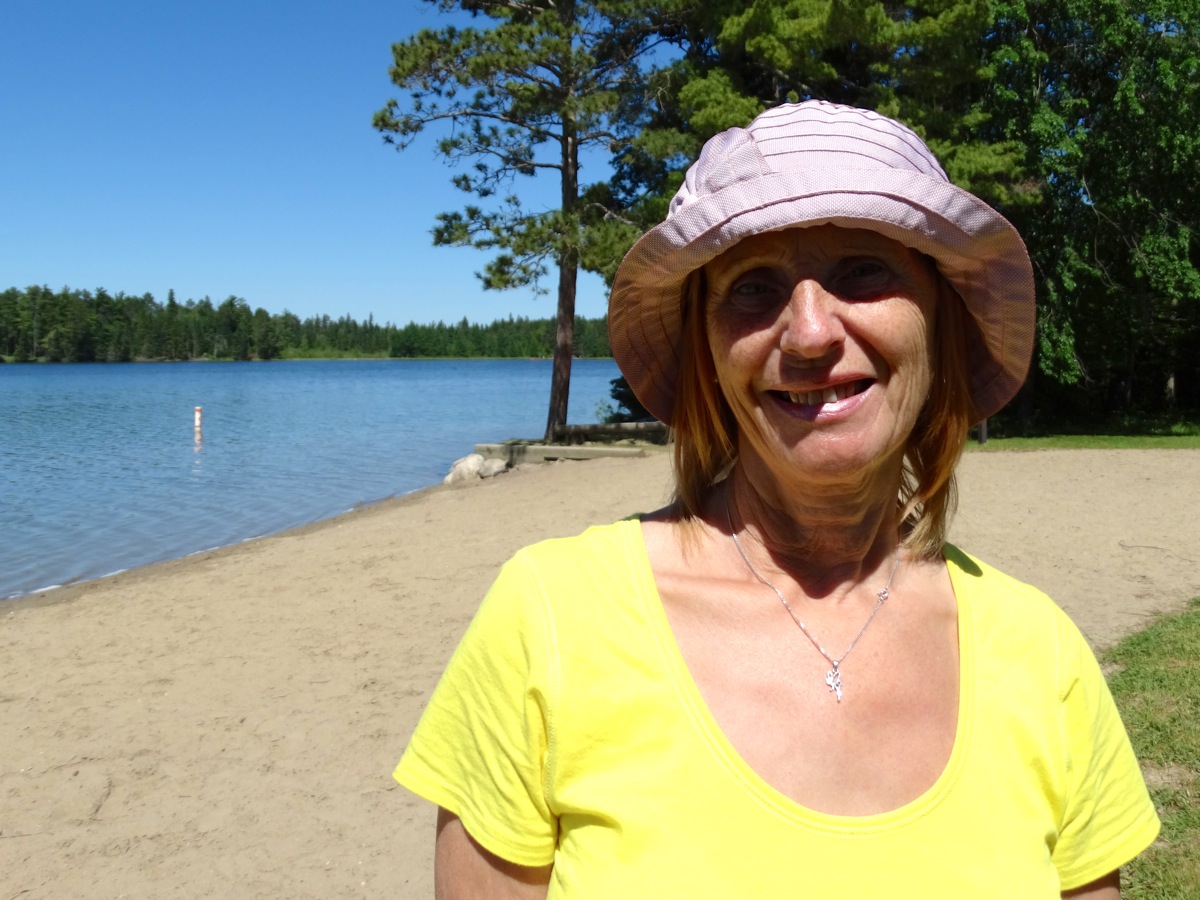 A Cairo court sentenced Ahmed Abdullah and his son who was given a suspended sentence of eight years over the same incident, the Middle East News Agency reported. The two were ordered to pay a fine of 5,000 Egyptian pounds ($700).

Abdullah ripped up a Bible and burned it during a Sept. 11 rally by extremists in front of the U.S. Embassy in Cairo, protesting an anti-Islam film produced in the United States.

It was a rare prosecution over attacks on faiths other than Islam. Over the past two years, attacks by extremist Muslims against followers of other religions, mostly Christians, have been on the increase.

Hang on a second, no stoning, prison sentence or flogging! Seems a tad biased.