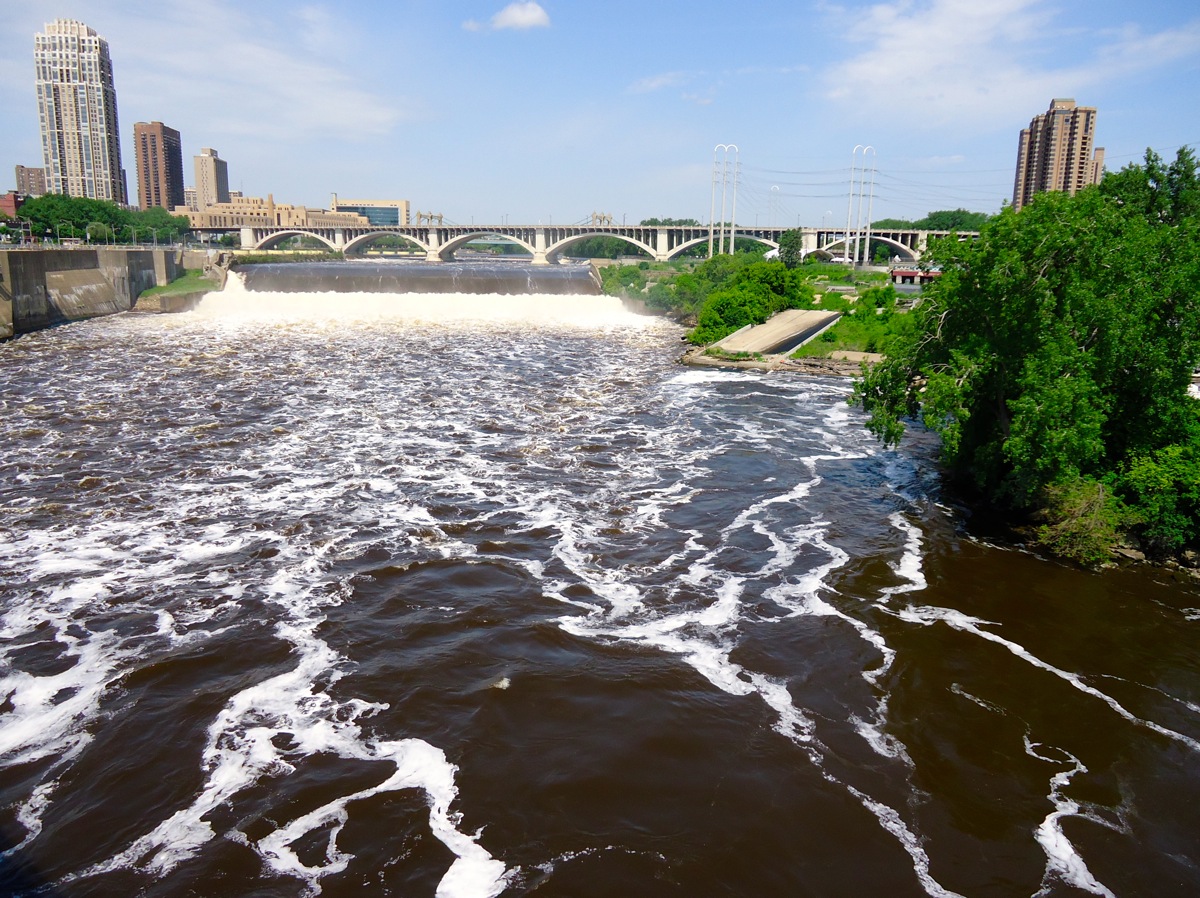 Lazy morning as usual. Then after lunch we take a stroll around the Stone Arch Bridge festival. It’s all going on right beneath our balcony so very handy. Mainly stalls selling stuff that no one really needs and food stalls selling calories and cholesterol.

A couple of groups playing.

We’re fortunate to get back for afternoon tea just before the heavens open up.

After an early dinner we set off to the 19:30 free 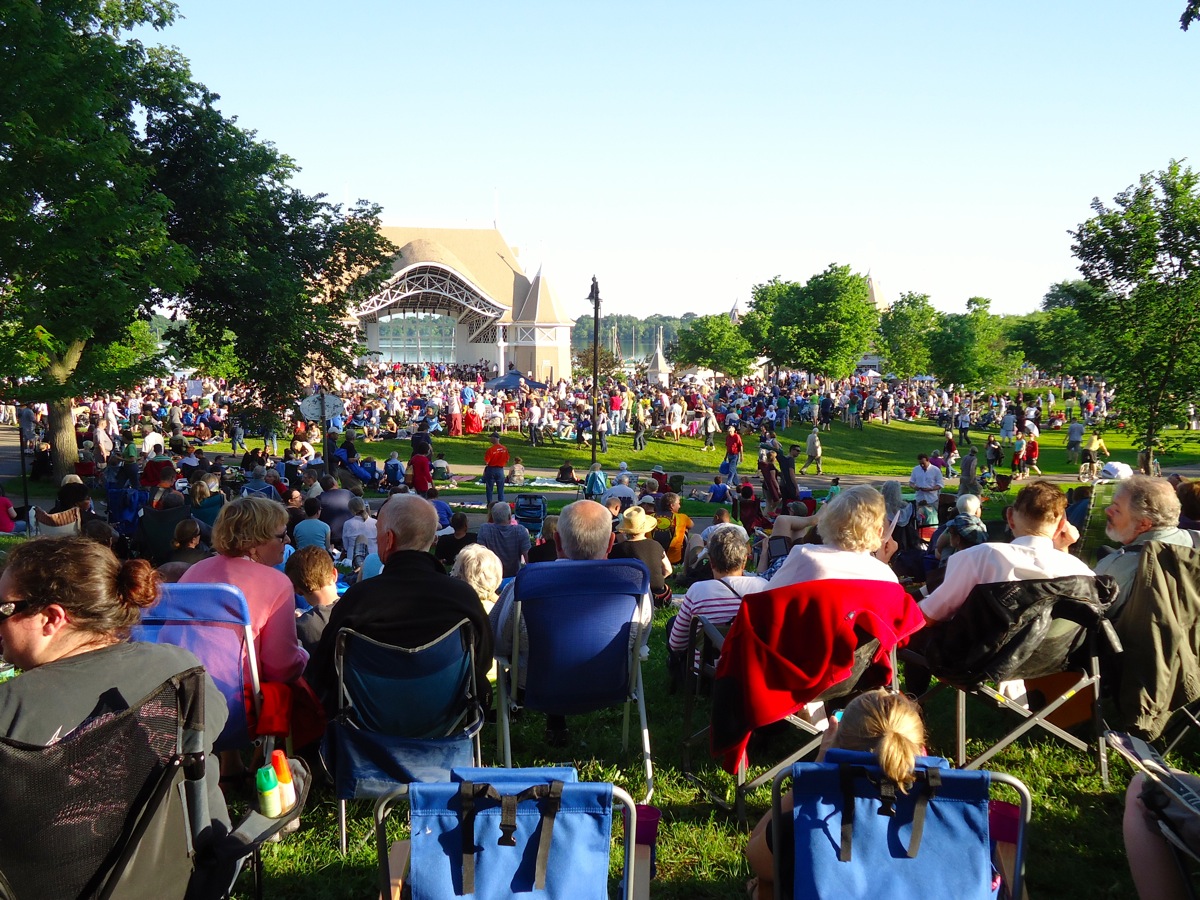 Opera Under the Stars performance. Being nerdy philistines we’ve never been to the opera before and never really had the inclination either, especially not in a monkey suite or any suite for that matter. So this is an ideal, free opportunity. Fortunately the suns out and all is well with the World once again.

Set off early in the vain hope that we’ll get a seat, fat chance of that. Traffic and parking is an absolute nightmare. Finally find somewhere to park and are lucky enough to get a seat on a picnic table a goodly distance from the stage – see picture. Sadly the sound system is no better than an iPhone at 200 yards. After 10 minutes my eardrums are aching with the strain. Never mind 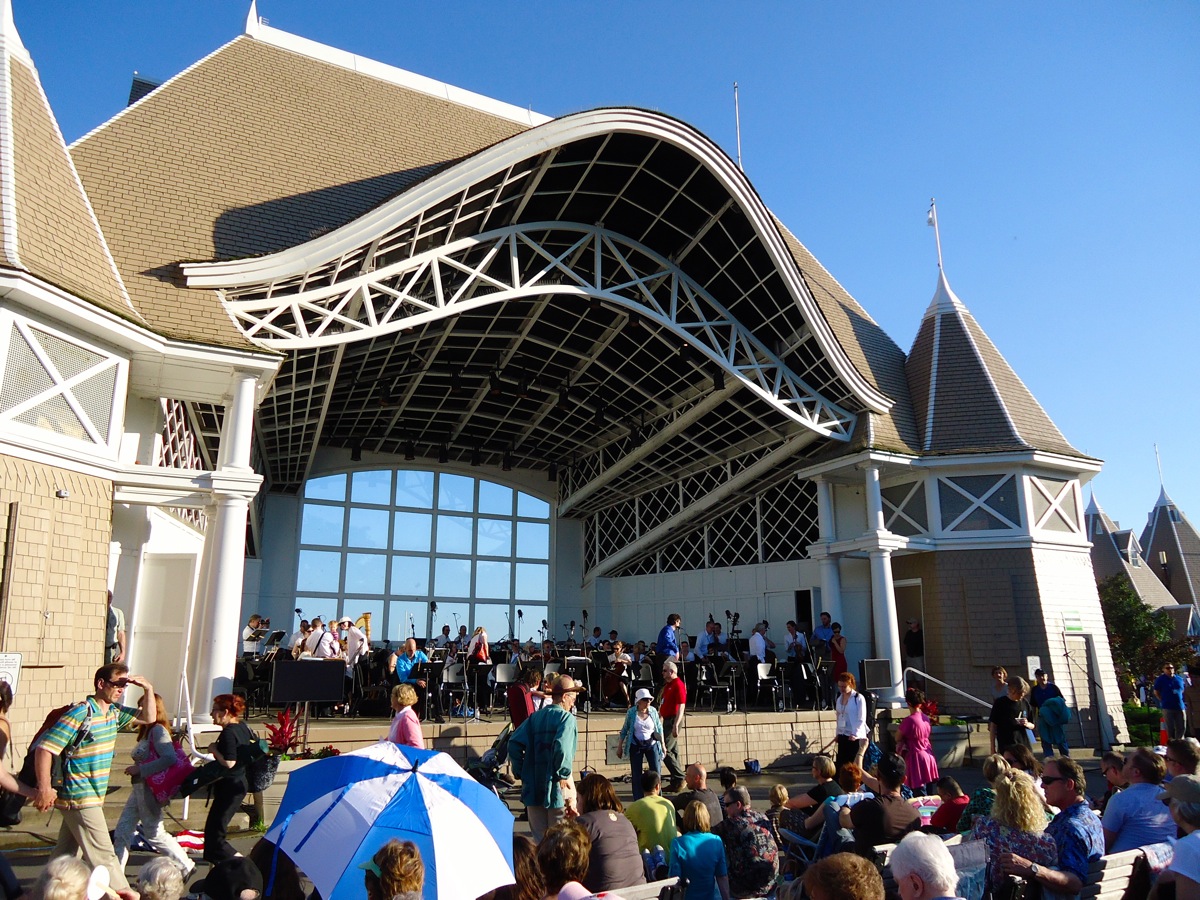 we walk down to the stage area and even in the “proper seats” – mainly taken up by Germans and their beach towels – the sound of people munching popcorn is drowning out the opera.

The whole area is packed to the gunnels. Some families have tables, not just small ones either, set up with wine, drinks, food and candles. People have bought all sort of chairs and food. From cheese and biscuits; barbecues smoking everyone to death; eating tuna straight out of a tin; fresh fruit and veg – too healthy for me. Every body seems to be having a good time even though 70% of them can hardly ear a thing. Some people are even reading books. The endearing memory of the evening has to be of a 12 year old lad lay on a groundsheet, with his 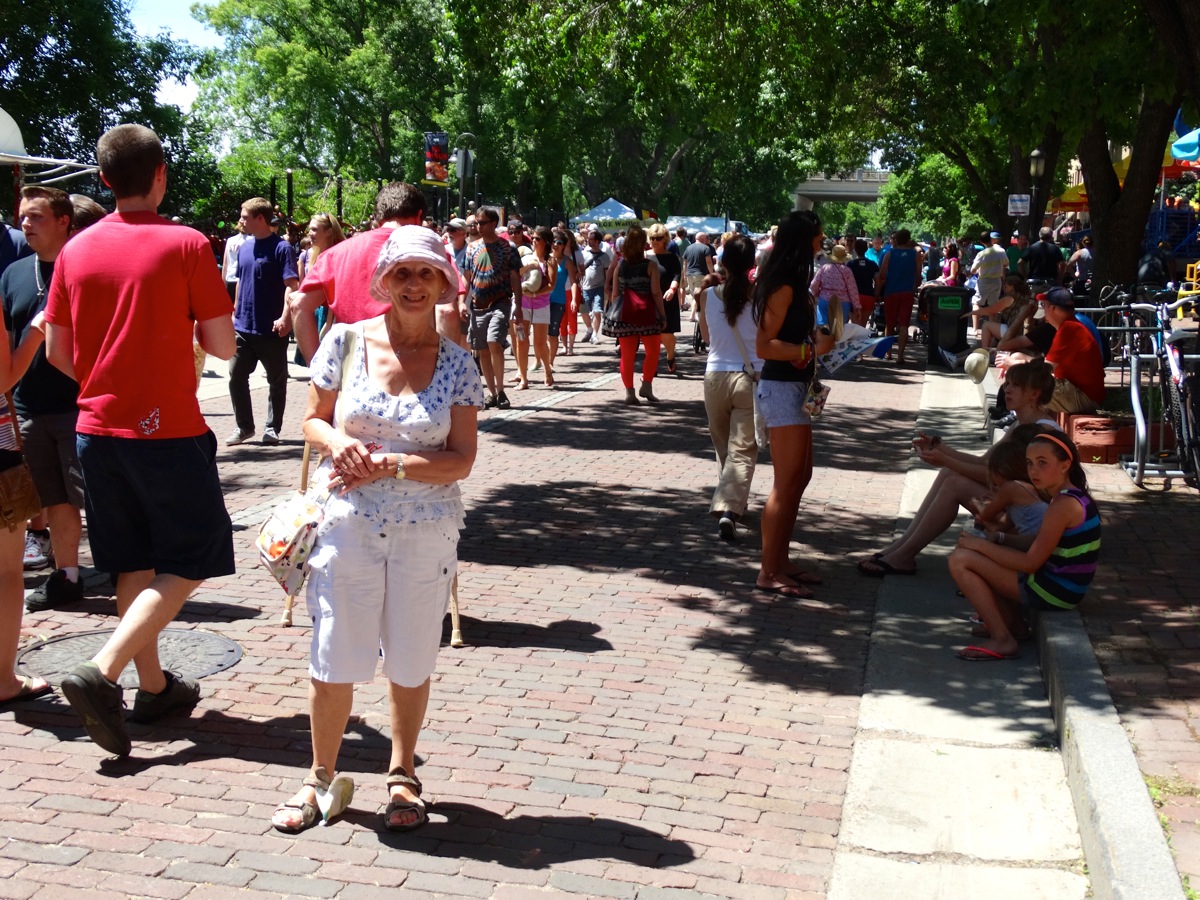 family, looking away from the stage, with his head in his hands, bored out of his tree and with a face like a bulldog licking piss off a nettle.

Wot no National anthem at the outset, or did we not hear it? Unusual! What’s happened to the proud Nation? It always seems such a good idea to play it at the beginning, stops the scrots dashing out at the end of a performance like they do in England.`

After 20 minutes, us philistines, pack up and go home. From what little I heard, it confirms my life long prejudice that its not for me. Although I have to say there are some popular bits of opera I have heard and enjoyed. I don’t think I could cope with 90 minutes or more of this one. 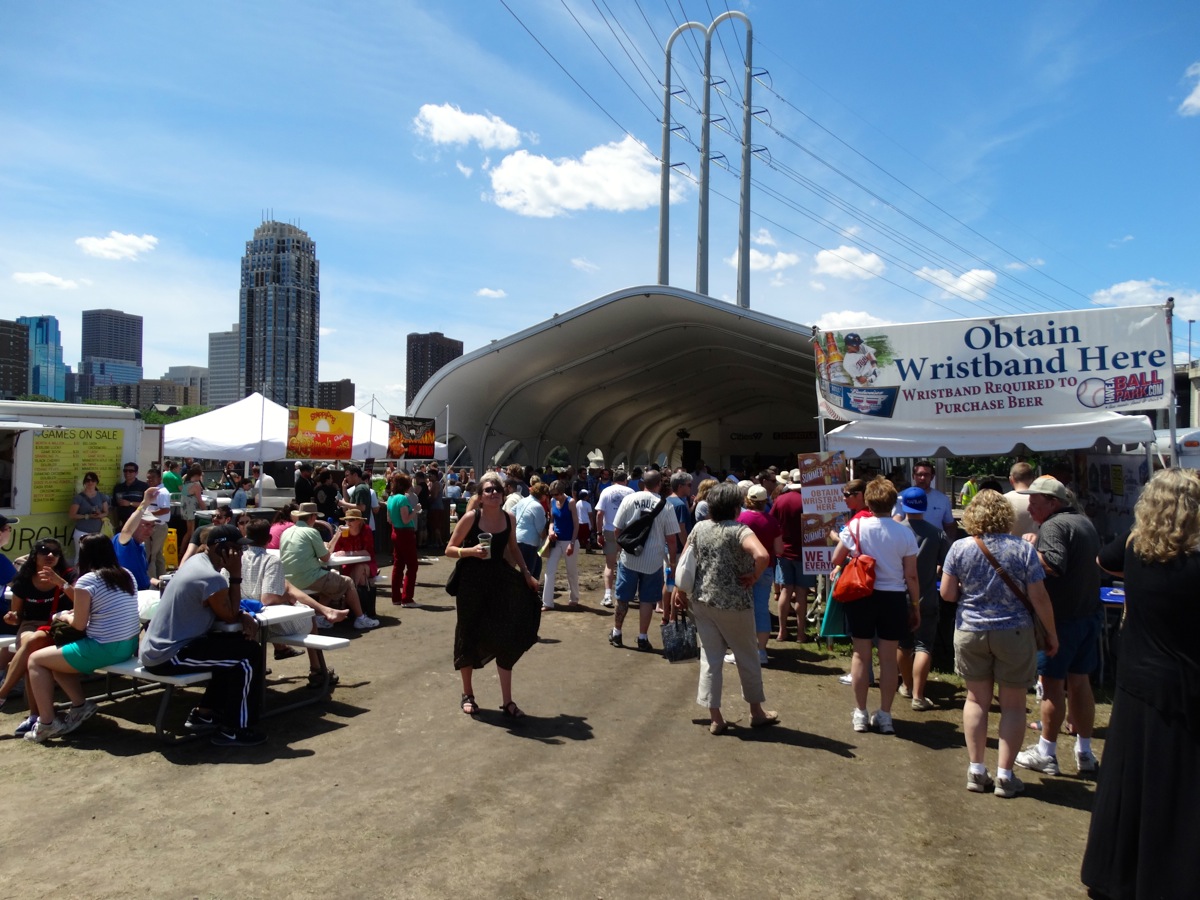 But it’s all indicative of the lifestyle here. And yes I appreciate it’s free but if you’re going to do a thing you should at least do it right. Choose a venue with plenty of seating and a sound system.

Now for something different. A few great old Lancashire sayings – translation in brackets: 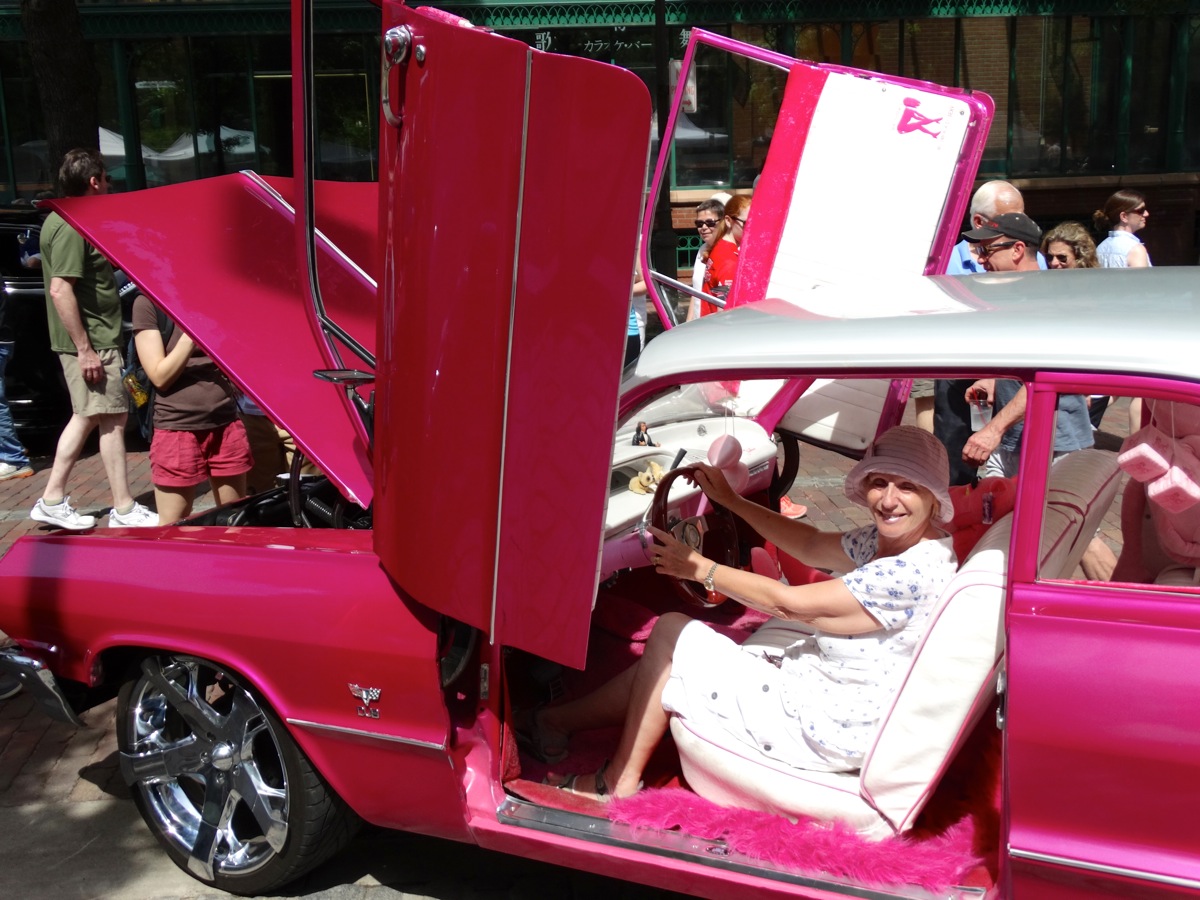 I don’t believe it! What has our country come to:

Contractor loses out on his ‘dream’ £1,000-a-week IT role after unwittingly saying he would treat his Muslim recruiter to a bacon sandwich

Clive Hunt, 58, says he was offered an eight-month NHS contract after attending an interview set up by recruitment firm Reed. The recruiter offered to come over and have breakfast when Mr Hunt started.

But he says he lost out on the job after he told her he would ‘get the bacon sarnies in’. 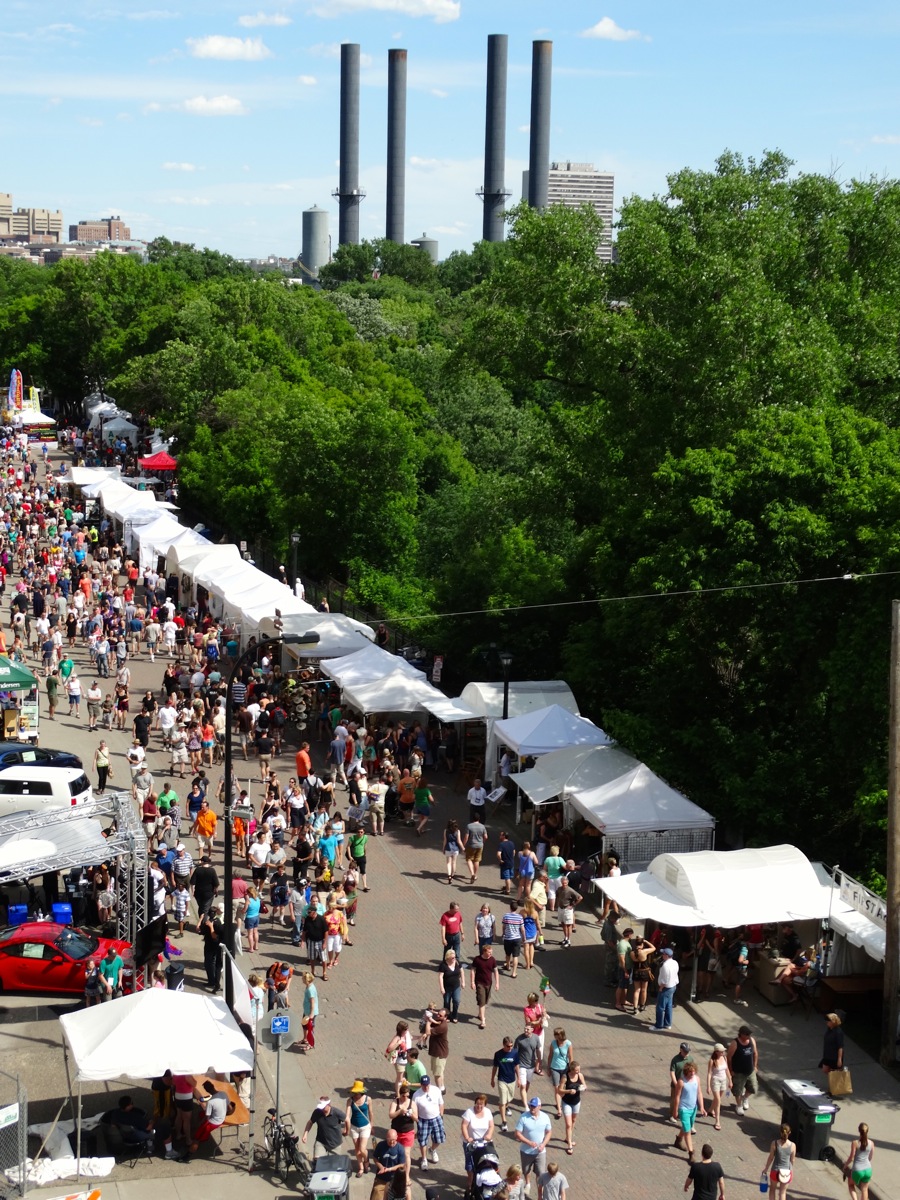 Clive Hunt, 58, says he was offered the IT job by recruitment firm Reed before a senior manager phoned him to say his offer of a bacon sandwich to a recruiter was racist

Mr Hunt, from Heywood, Greater Manchester, said he wasn’t aware he had offended Sharika Sacranie, 29, during a meeting at the firm’s city centre office until he received a phone call from a senior manager.

You might know it’s in the Daily Mail, always gets my hackles up.

Wander up to the supermarket and liquor store in the morning. Silly me the liquor stores closed. Looks like the 18th’s been re-enacted, perhaps by Monday the 21st will come into play again. It’s Sunday and the Christian fundamentalists busy bodies have imposed their blue laws on every one. How can such a lovely, civilised, trendy, 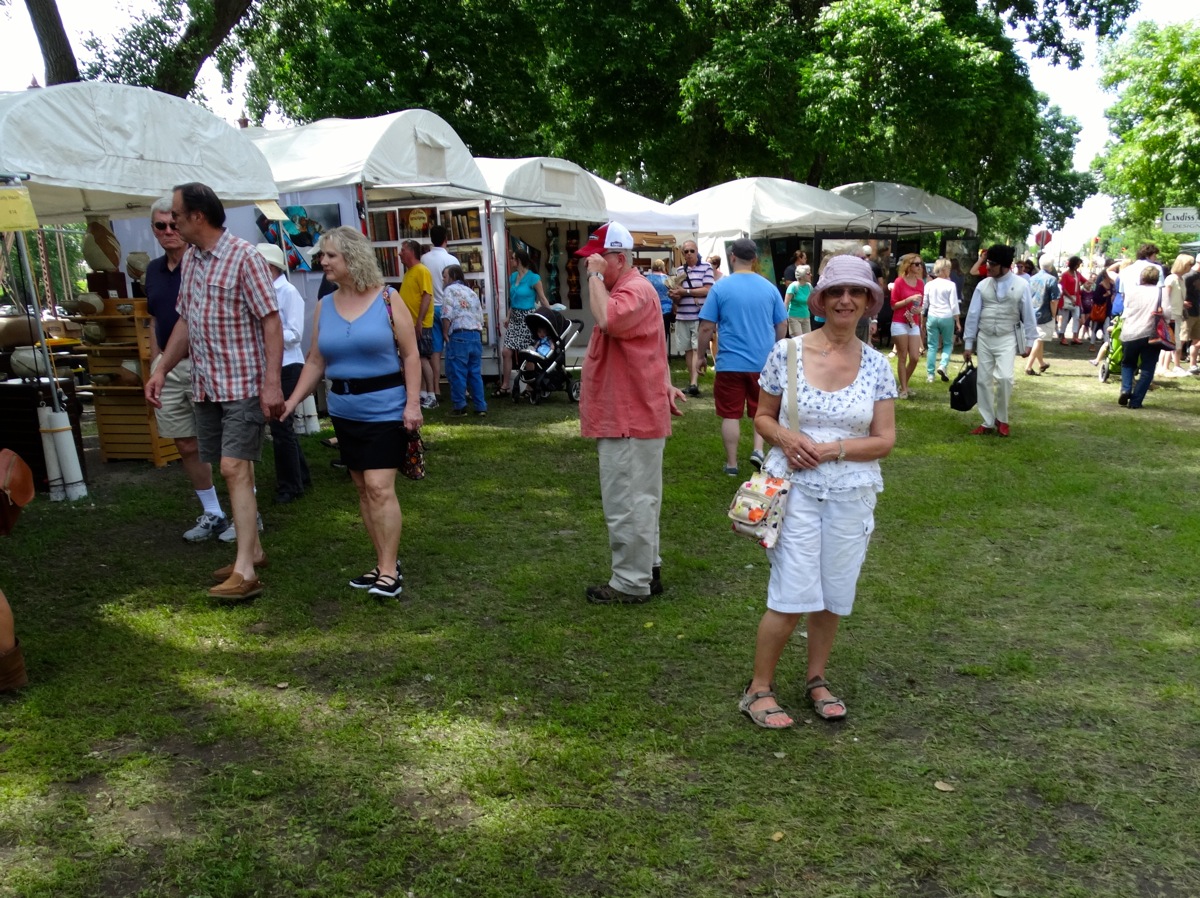 liberal city tolerate such an anathema in the 21st Century. Surely it’s a violation of the 1st Amendment. Never mind when the Muslims get a grip of this country it’ll be back to a permanent 18th.

After lunch we take a stroll out of our front door into the festival. Turns out to an expensive step as Wendy finally gets a new ring she’s been mithering for. Stop and listen to a few bands, see some awesome old cars and pottery. Then it’s back home for tiffin.

We’re certainly not city people but I think this place is amazing, bikes, parks, barbecues, lakes, lovely city, not too much traffic. All in all seems a great life style. 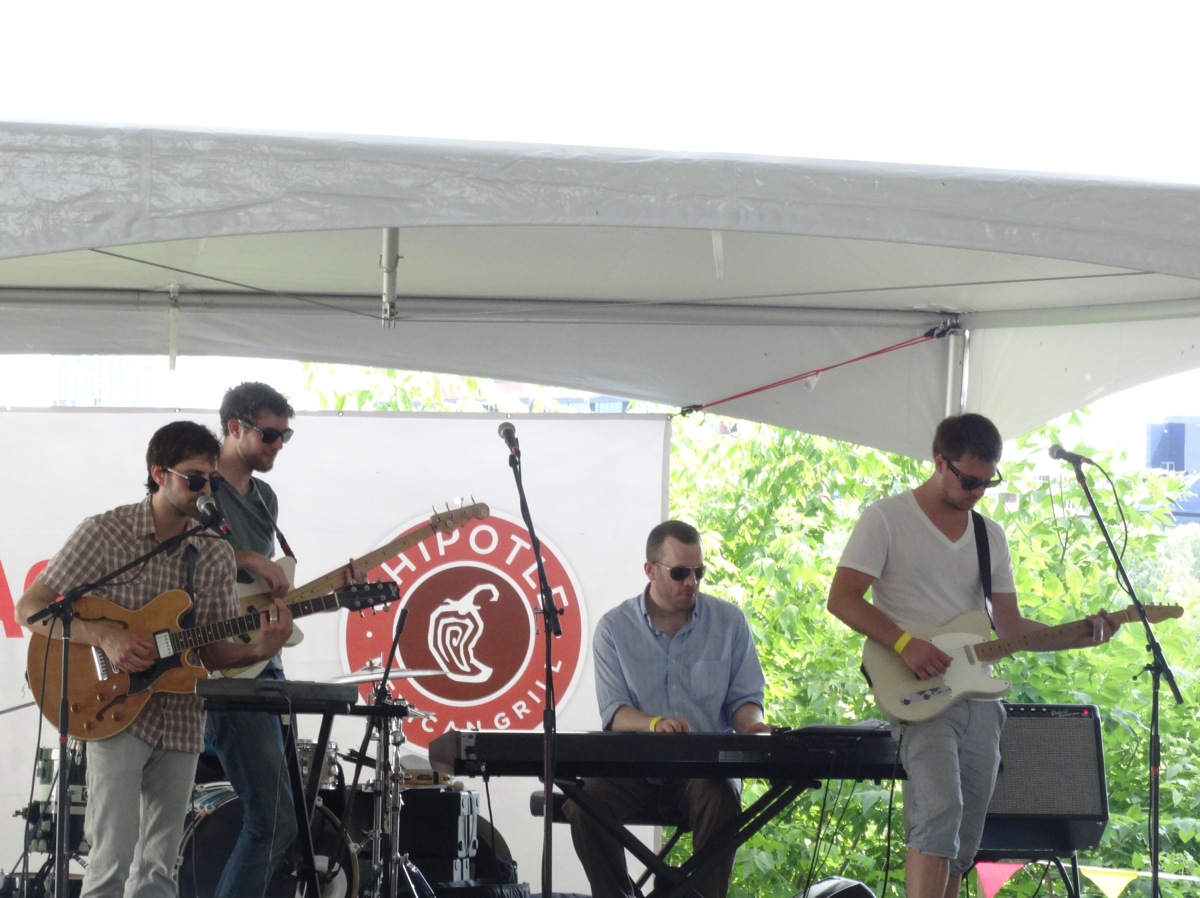 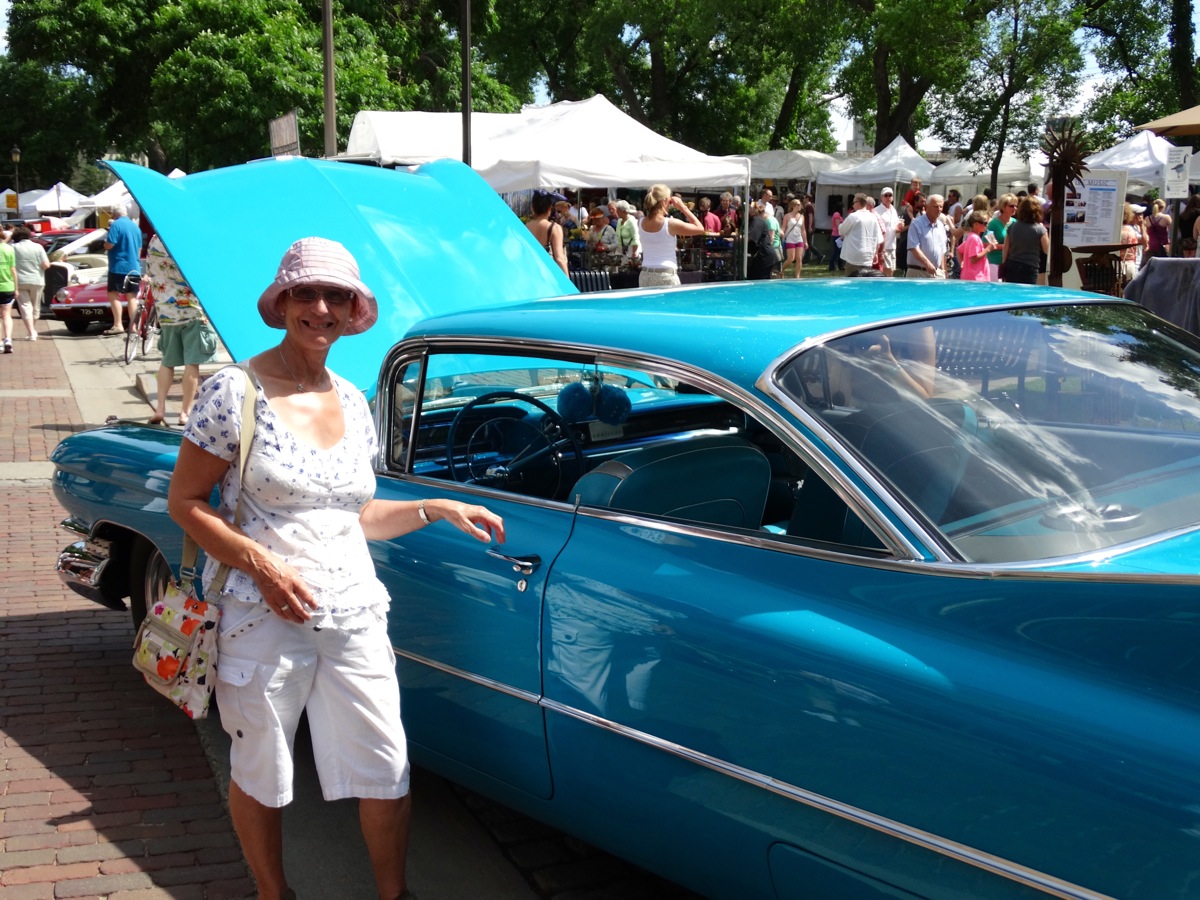 The White House assures that tracking our every phone call and keystroke is to stop terrorists, and yet it won’t snoop in mosques, where the terrorists are.

That’s right, the government’s sweeping surveillance of our most private communications excludes the jihad factories where homegrown terrorists are radicalized.
Since October 2011, mosques have been off-limits to FBI agents. No more surveillance or undercover string operations without high-level approval from a special oversight body at the Justice Department dubbed the Sensitive Operations Review Committee. 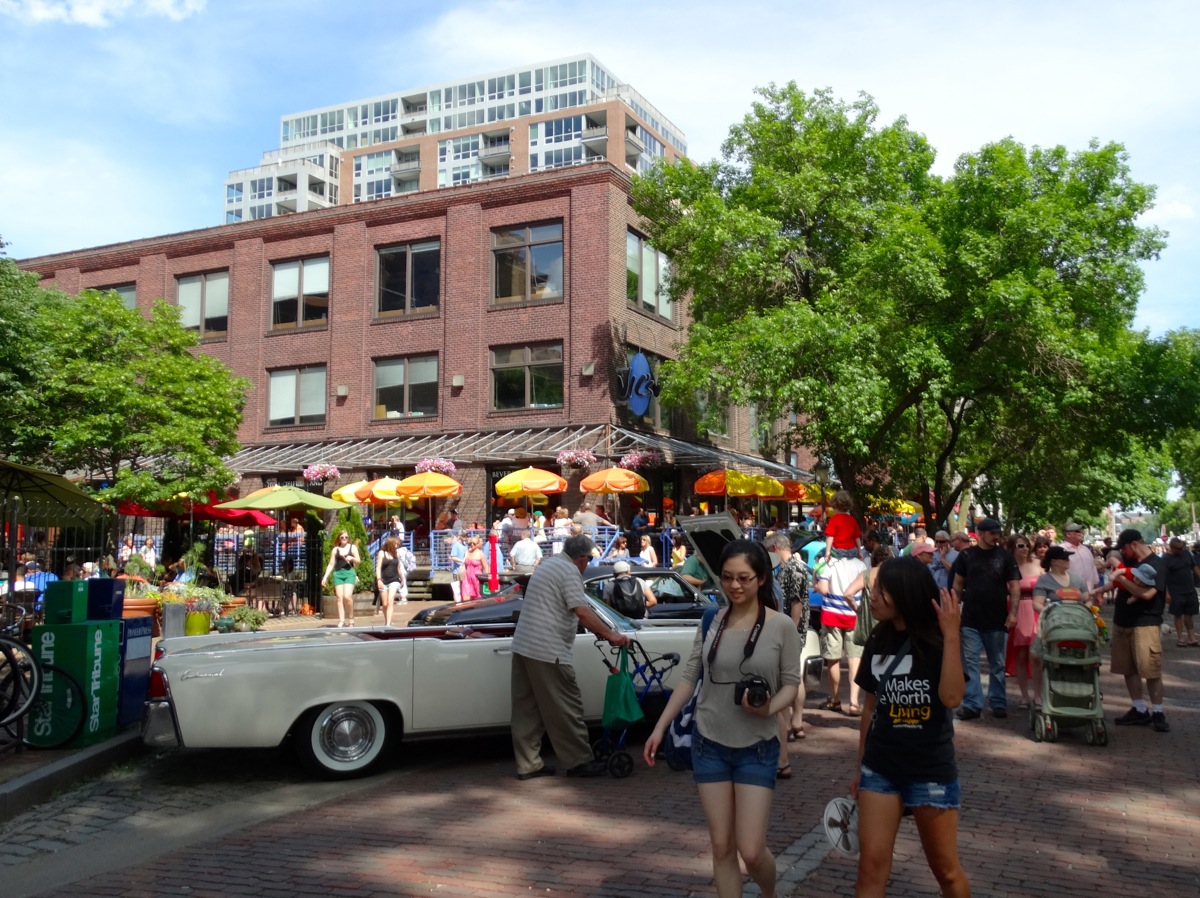 Before mosques were excluded from the otherwise wide domestic spy net the administration has cast, the FBI launched dozens of successful sting operations against homegrown jihadists — inside mosques — and disrupted dozens of plots against the homeland.

The FBI never canvassed Boston mosques until four days after the April 15 attacks, and it did not check out the radical Boston mosque where the Muslim bombers worshipped.
The bureau didn’t even contact mosque leaders for help in identifying their images after those images were captured on closed-circuit TV cameras and cellphones.
One of the Muslim bombers made extremist outbursts during worship, yet because the mosque wasn’t monitored, red flags didn’t go off inside the FBI about his increasing radicalization before the attacks.