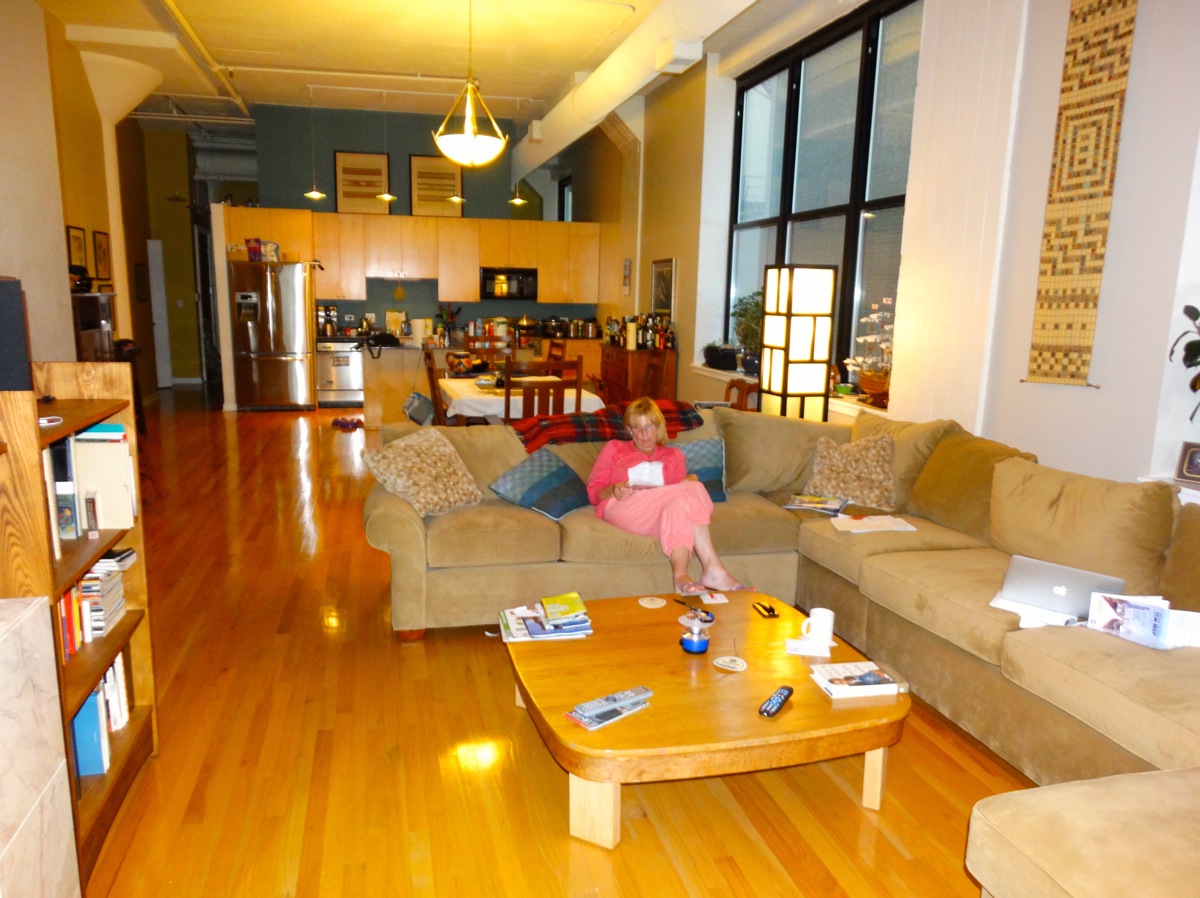 Drive up from Indianapolis to Chicago. A pleasant 3 hour drive. Although our SatNav seemed to determined to take us a tour around the BP Refinery in Gary, Indiana. A depressing industrial area but they have to make the petrol for these gas guzzlers somewhere.

Civilisation at last. How do I know? Well Taco Bells; Starbucks on nearly every corner; wine on the shelves in supermarket; fewer blobies;  and of course the final nail in the Bible belt / Hill Billy coffin, Apples stores – note the “s” on the end, plural, more than one. Not to say we didn’t really enjoy the South or Tennesssee.

Now we have a great new experience, a spacious converted 9th floor loft in the Print District within the Downtown Loop of Chicago – see pictures. This is really going to test our metal as we’re not really city people so it will be an interesting experience. Never really stayed so high up in the heart of a city. We have a car available to us but it’s going to be mainly walk 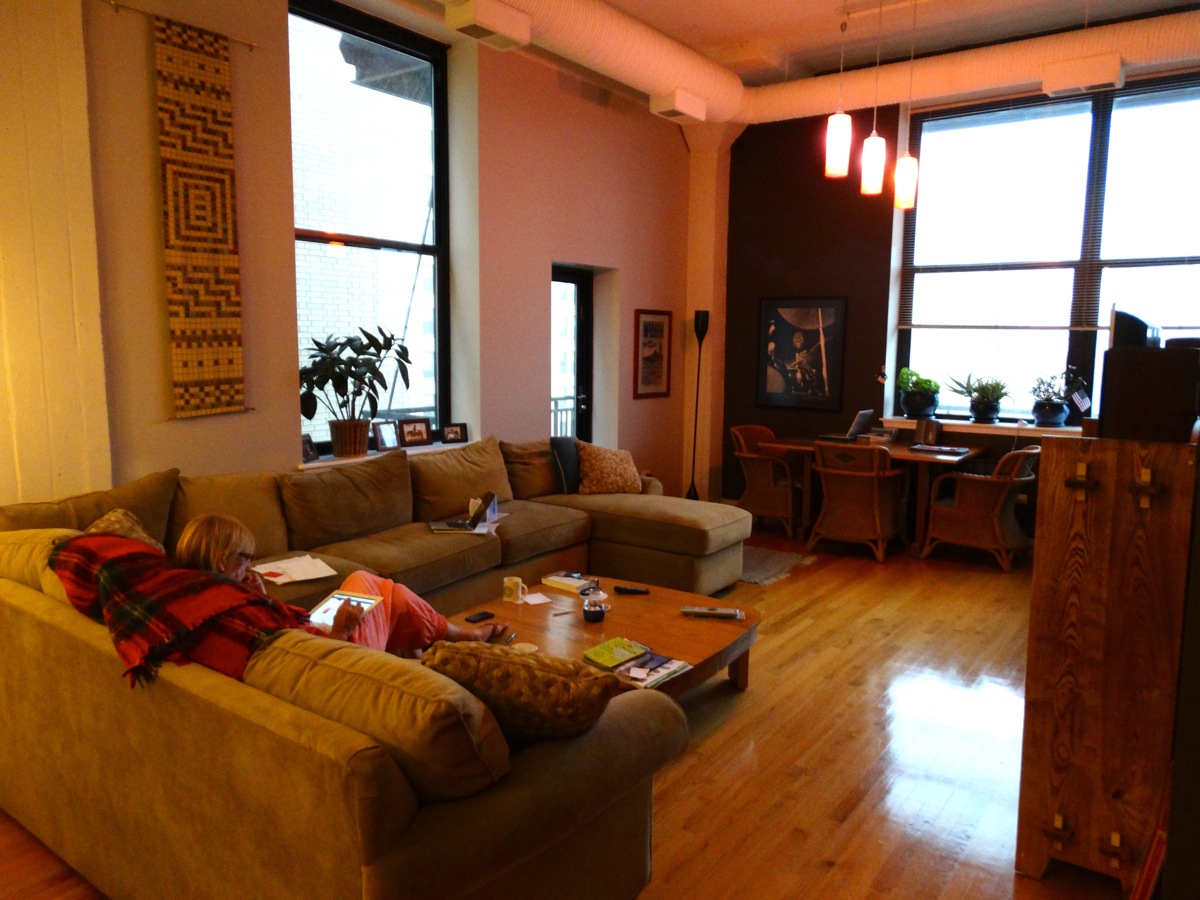 or public transport. Great wifi 20Megs, refreshing. No need to arse around getting on and staying on. A free pet in the form of a 19 year old little cat called Leda. She’s real cute, quite affectionate and no trouble. Nice to have a pet.

Roberta and Jerry are librarians so as you can imagine there are thousands of books in their library. Not a Kindle anywhere. I even have all 18 tombs of the Oxford English Dictionary at my disposal – perhaps there’s hope for the survival of the English language after all. Get to meet them for a couple of hours as they hand over their place and show us where everything is.

We’ve a South facing balcony looking down on Downtown Chicago, that’s if you’re brave enough. On the street corner there’s a Starbucks.

As you can imagine Chicago’s busy, traffic, sirens and city noise. The noisiest out there seems to be the drone of air conditioning system. It’s going to be an interesting experience for two country folk from the wilds, cattle, sheep and quiet of rural Belthorn. Fortunately the loft is reasonable quiet once 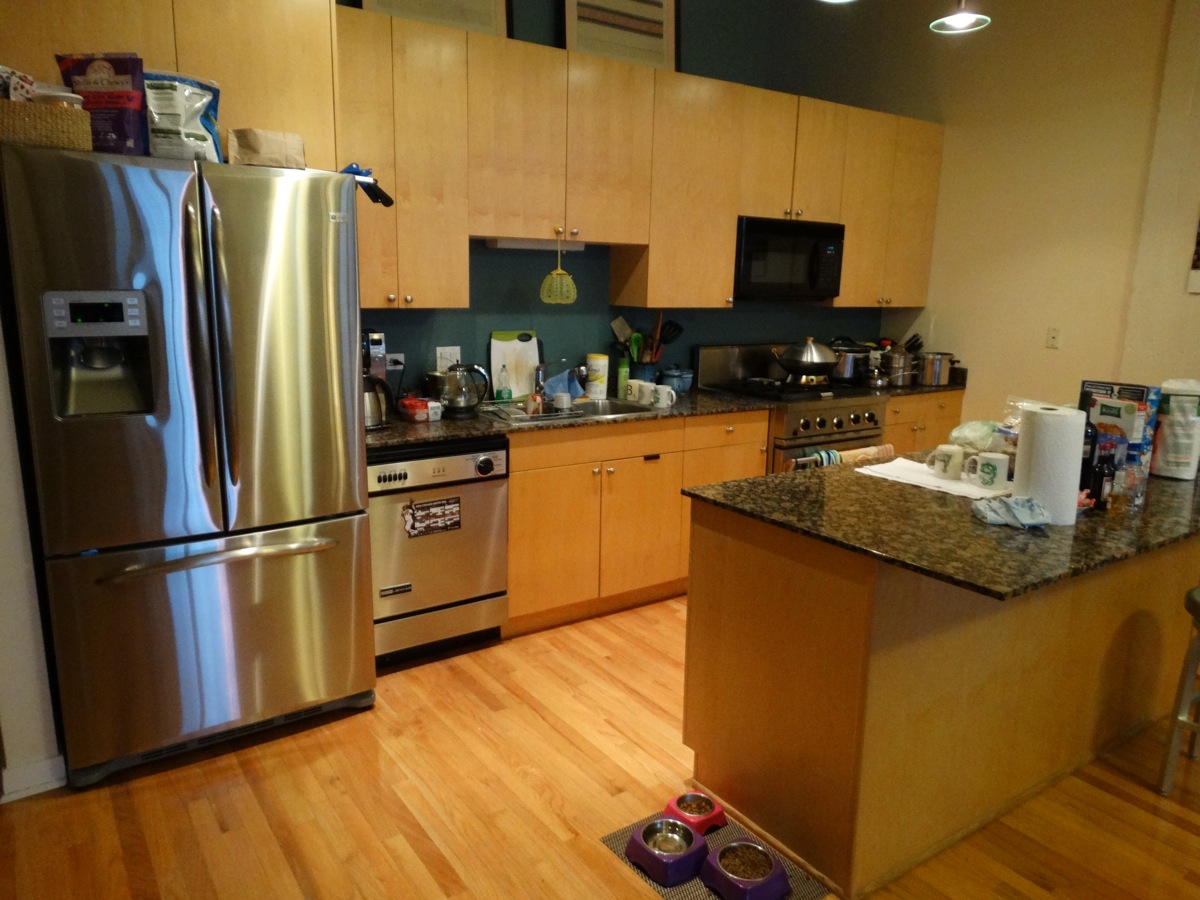 the balcony door is shut and of course is fully air conditioned.

A few more laws in and around Illinois we need to be wary of:

Kites may not be flown within the city limits.

In the Pullman area, it is illegal to drink beer out of a bucket while sitting on the curb.

It is legal to protest naked in front of city hall as long as you are under seventeen years of age and have legal permits.

Law forbids eating in a place that is on fire.

Humming on public streets is prohibited on Sundays.

It is illegal to wear sagging pants in Collinsville.

Don’t you just love this last one. How do the youngster, and scum boarders, with their crotch around 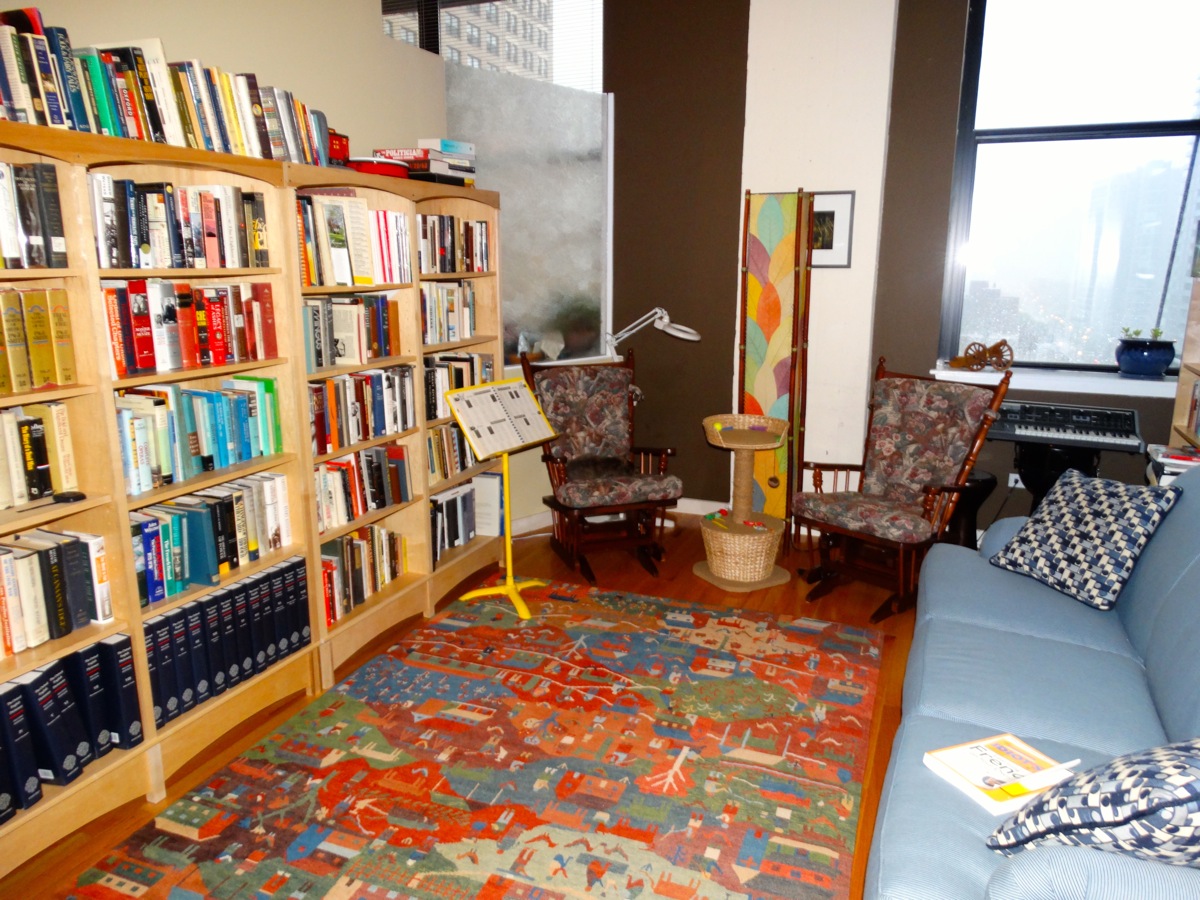 their knees and their stained underpants on display to all cope.

Muslims if the Quran is the literal word of Allah then why?

Would Allah an all knowing God leave it open for interpretation for Fundamentalists to use?

Also why are there contradictions when God himself wrote it also why no cures for H.I.V, Cancer or Palsy. Why does it state to slay the infidels and to lay in wait for Christians and Jews to slay them. The religion of peace can have no excuse seeing these are the literal words of

Have a walk down to the Visitors centre. Well hidden – aren’t they all – no signs. Of course everyone would know it’s in the Culture Centre. 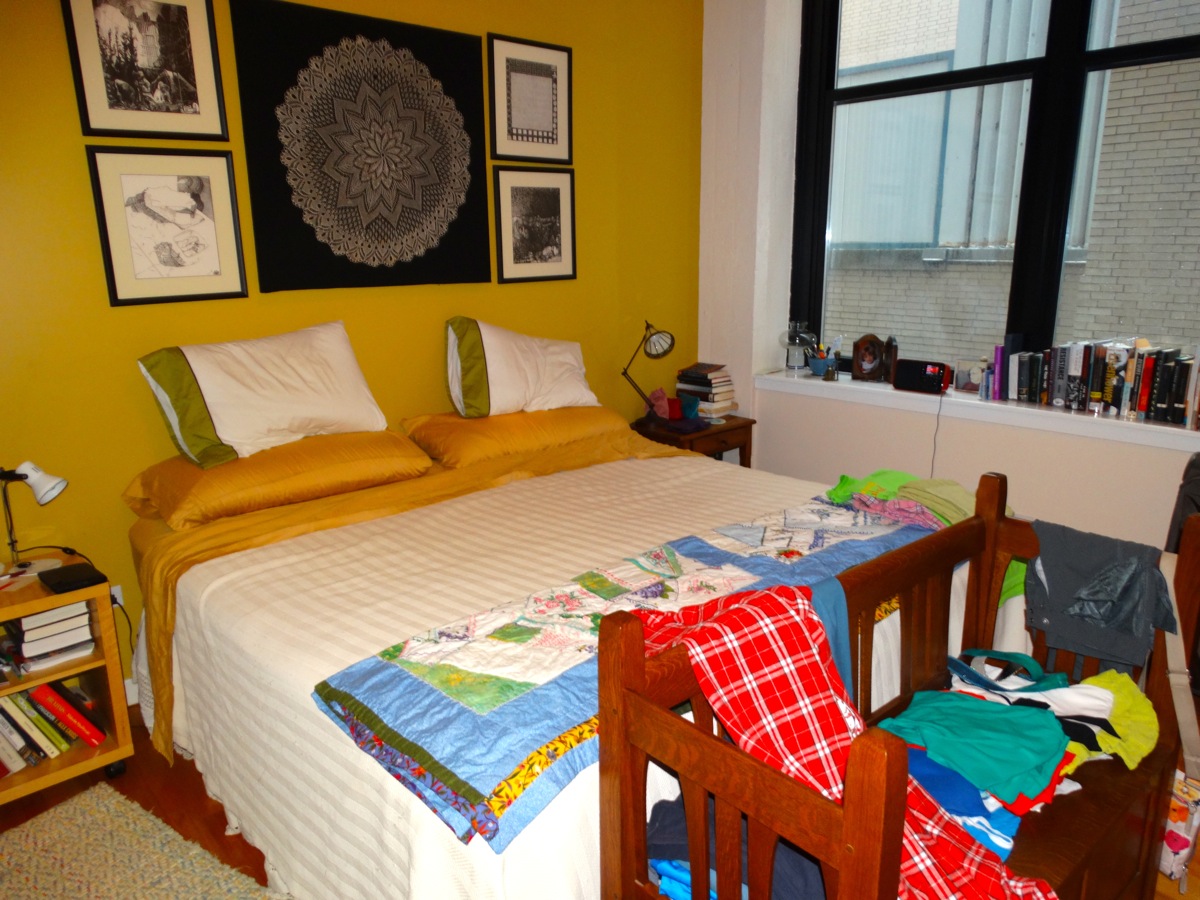 Nip out to supermarket to stock up. Wholefoods the American equivalent of M&S, expensive, but with fantastic choice of foods.

Joys of driving in downtown Chicago, on the wrong side of the road in a manual car. Ok until you try changing gear with the window winder, if it had one. Major problem starting it; turn key doesn’t work; make sure it’s in neutral doesn’t work; foot on brake doesn’t work; get out and swear at it doesn’t work. Call owner for the magic incantation. Foot on brake and clutch, then turn key. How quirky is that! Mind you what can you expect from a Volkswagon in America?

If one wishes to plant new sod in his or her yard in the summer months, that person may not use the city’s water to water it. 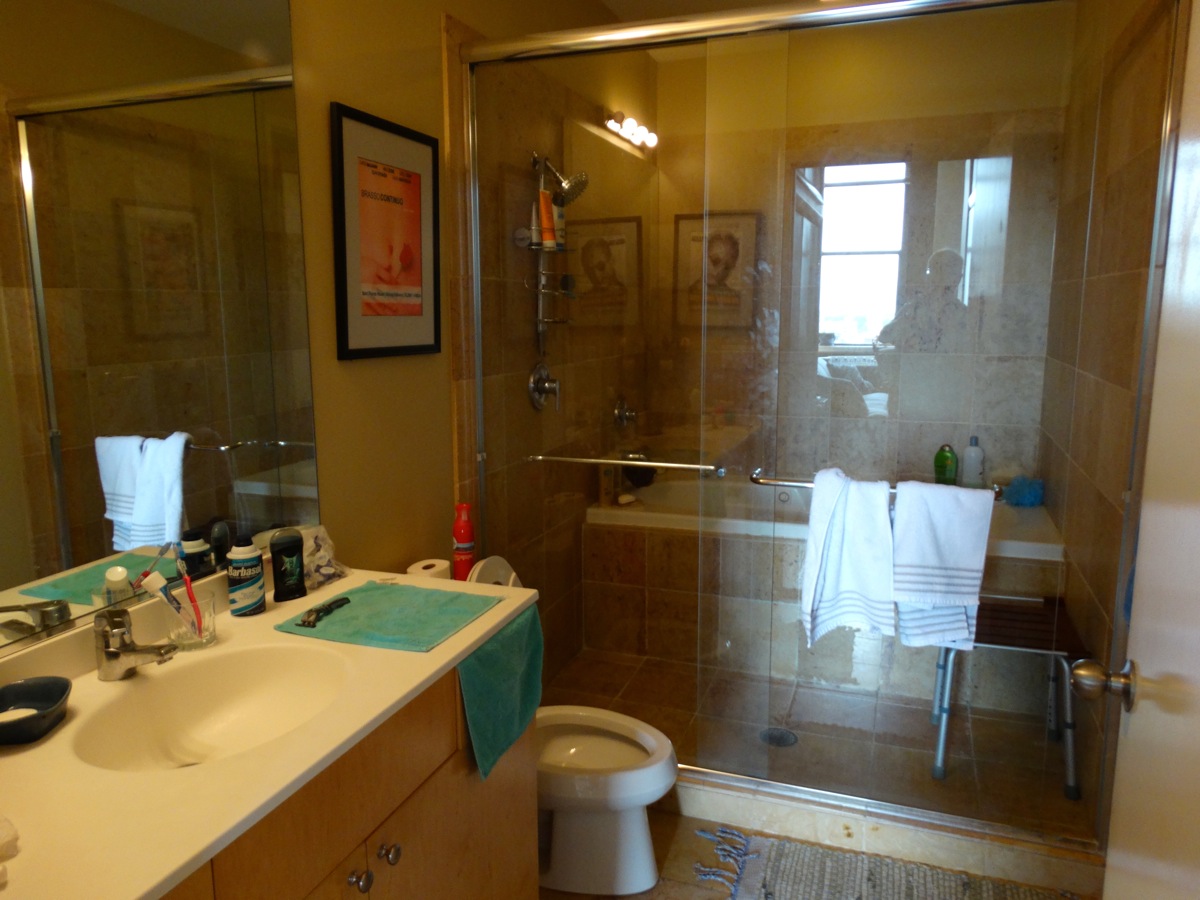 Wheelbarrows with For-Sale signs may not be chained to trees.

It is unlawful to change clothes in an automobile with the curtains drawn, except in case of fire.

It is illegal to burn bird feathers.

A NEWPORT shopkeeper has been forced by police to remove a T-shirt from his shop window because they felt it “could be seen to be inciting racial hatred.”

Matthew Taylor, 35, the owner of Taylor’s clothes store on Emlyn Walk in the city, printed up and displayed the T-shirt with the slogan: “Obey our laws, respect our beliefs or get out of our country” after Drummer Lee Rigby, 25, was killed in near Woolwich barracks in London last week.

But following a complaint from a member of the public, police came to his store and threatened to arrest him unless he removed the Tshirt from sight.

Mr Taylor said: “I had a visit from two CSOs (community support officers) because it has been reported by someone who felt it was offensive.

“It’s not meant to be offensive.

I didn’t produce it to be offensive. It’s what I believe.

“At the end of the day if you don’t like the way a country is run and don’t like our beliefs then go somewhere else, don’t go killing people.

“I don’t care if you Welsh, Scottish, English, go somewhere else if you don’t like it.”

“I’m offended I have had to take it down. I can’t see why I can’t share my beliefs,” he said.

A spokeswoman for Gwent police confirmed: “ We did have a call from a member of the public. We visited the shop and asked him to remove it (the T-shirt) as it could be seen to be inciting racial hatred.” 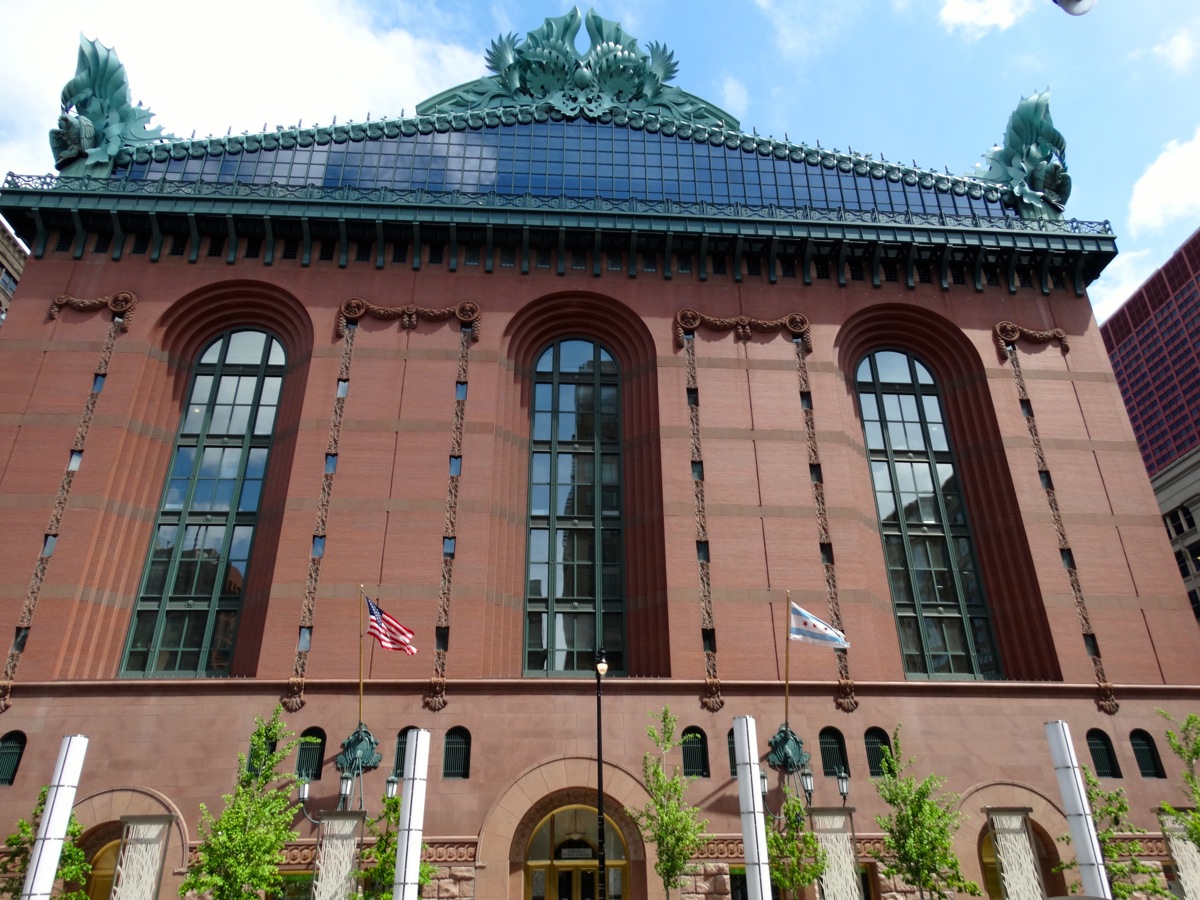 This is what has become of my country ruled by a series of Leftist and liberal do gooder clowns, enforcing political correctness to protect their political nightmare of multi-culturism that clear isn’t working. It’s now a land overflowing with self styled ”race detectives” (in and out of government/police depts.) stamping out every existing form of freedom of expression, where a person can’t even openly pronounce a love and affection for the very values and freedoms that helped build and secure the country.

I’m sure that message is what the majority of right minded countrymen believe irrespective of race, religion, sexual orientation, age, shoe size or 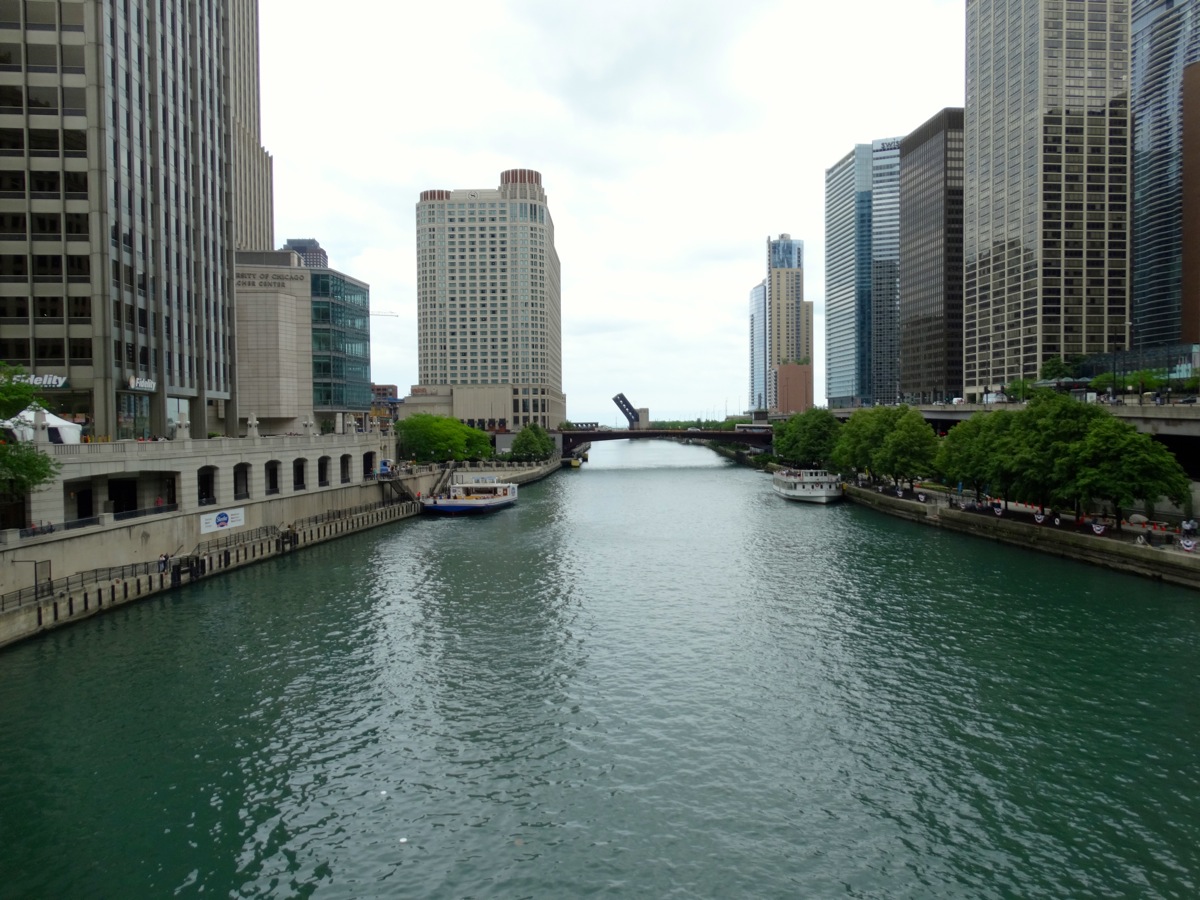 height. In fact it could make a good acid test for Citizenship.

Why aren’t the police there arresting people at these fundamentalist hate mongers when they have their marches and hate banners? Well we all know why!

Also, I don’t buy the argument about the validity of anything hanging solely on the bare thread that…. no one finds it ”offensive”. The truth much of the time can be very offensive, are we to reject truth because the truth sometimes causes people mental anguish? Just how far down that communist hellhole are people willing to crawl in order not to cause ”offense”? Sheeeesh the stupidity of it all. As a child along with all my mates we learnt “stick and stones”. It’s about time these loons did too.

I think when I get back I’ll have a few Tee shirts printed up, along with a Union Jack, and start wearing them around town.