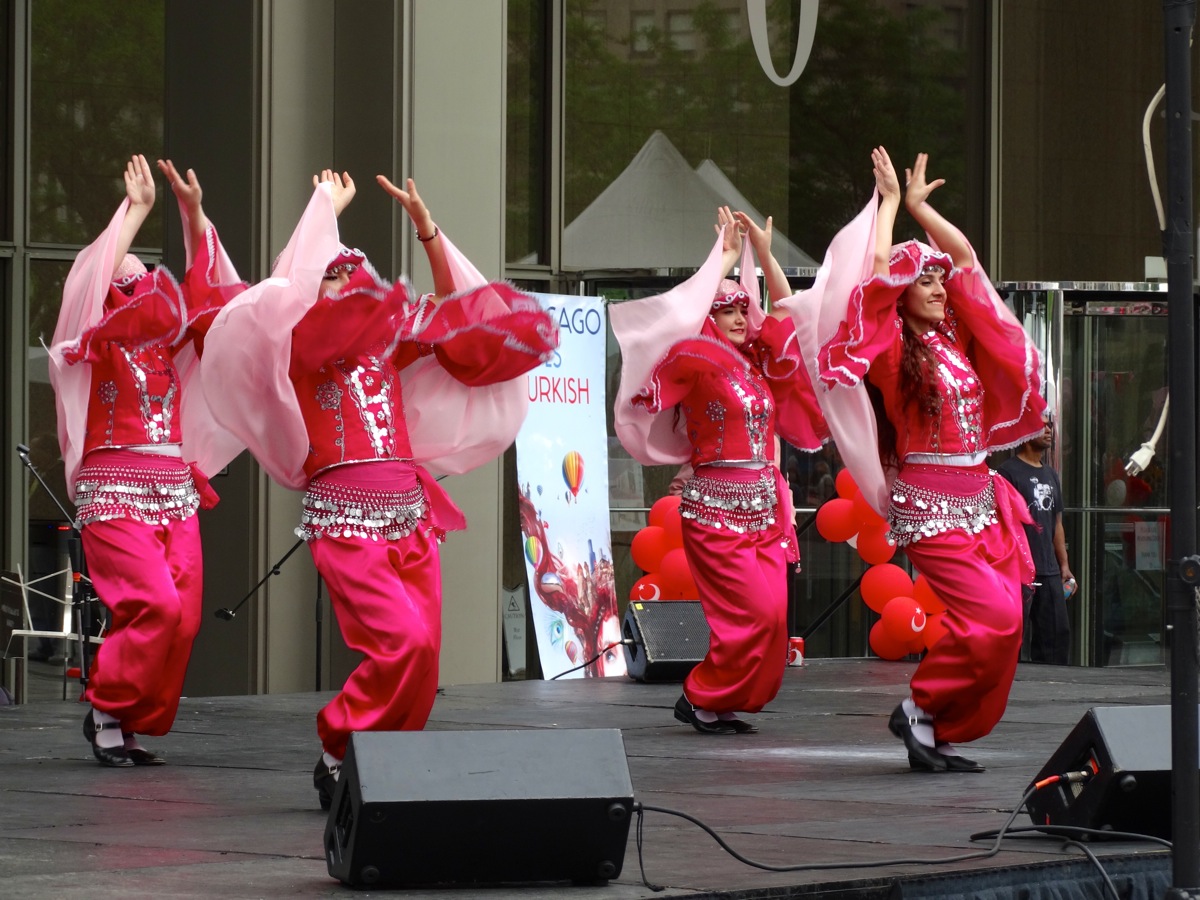 Now we’ve found it we walk down to the visitors centre for a free – my I do like that word – guided walking tour of the Cultural Centre and the Downtown loop. Alas not one of the best walking tours. 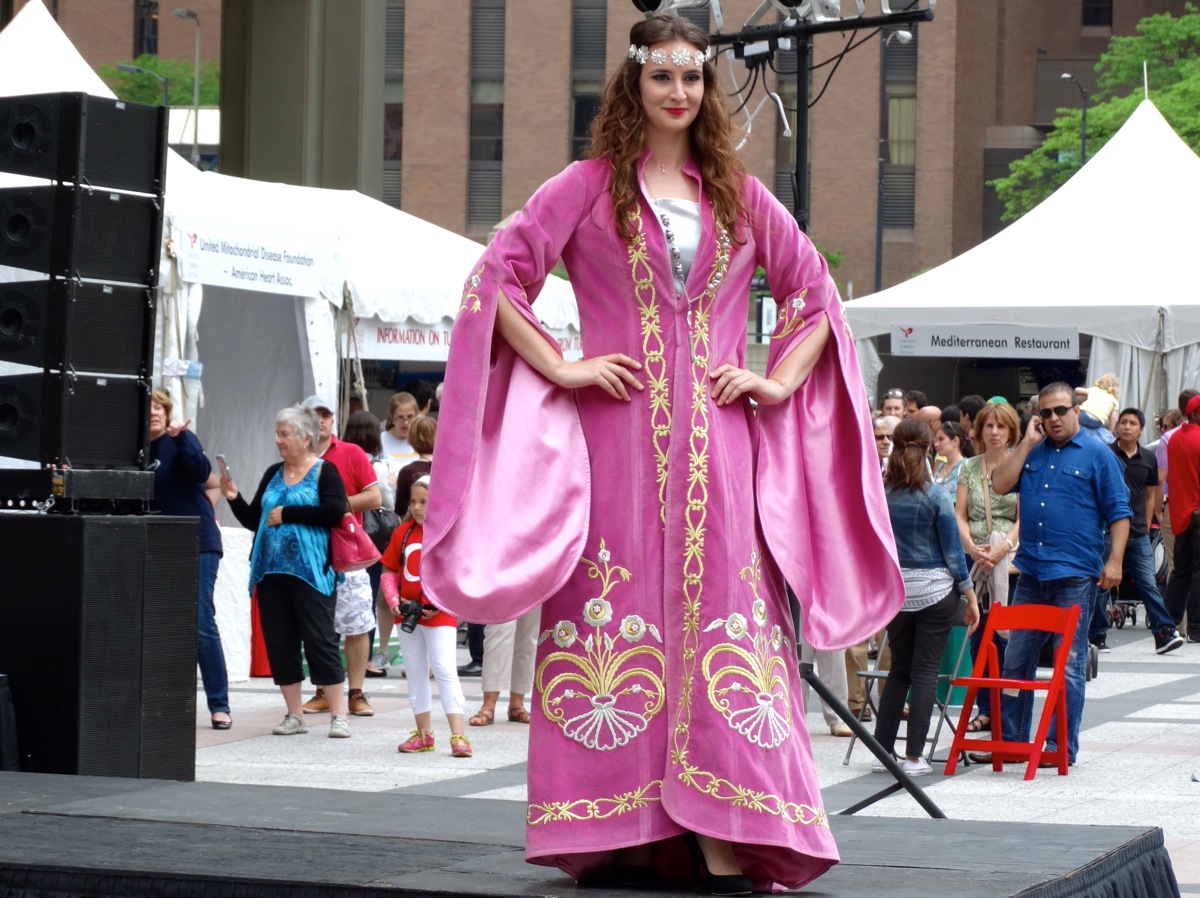 Then walk down to Navy Pier. Chicago’s equivalent of Blackpool by the Lake. Glad we’ve got that over and done with.

On the way visit the free – that word again – Turkish Festival. Dancing, music and of course a merchandising opportunity for food; drink, including alcohol; Turkish tat.

Then walk all the way back. 6 hours walking. We splash out on a 7 day travel ticket, thats when we can find somewhere that sells them. Metro personnel are clueless, don’t know where they are sold.

Get back to our loft knackered after a hard days walking and just as the heavens open up. 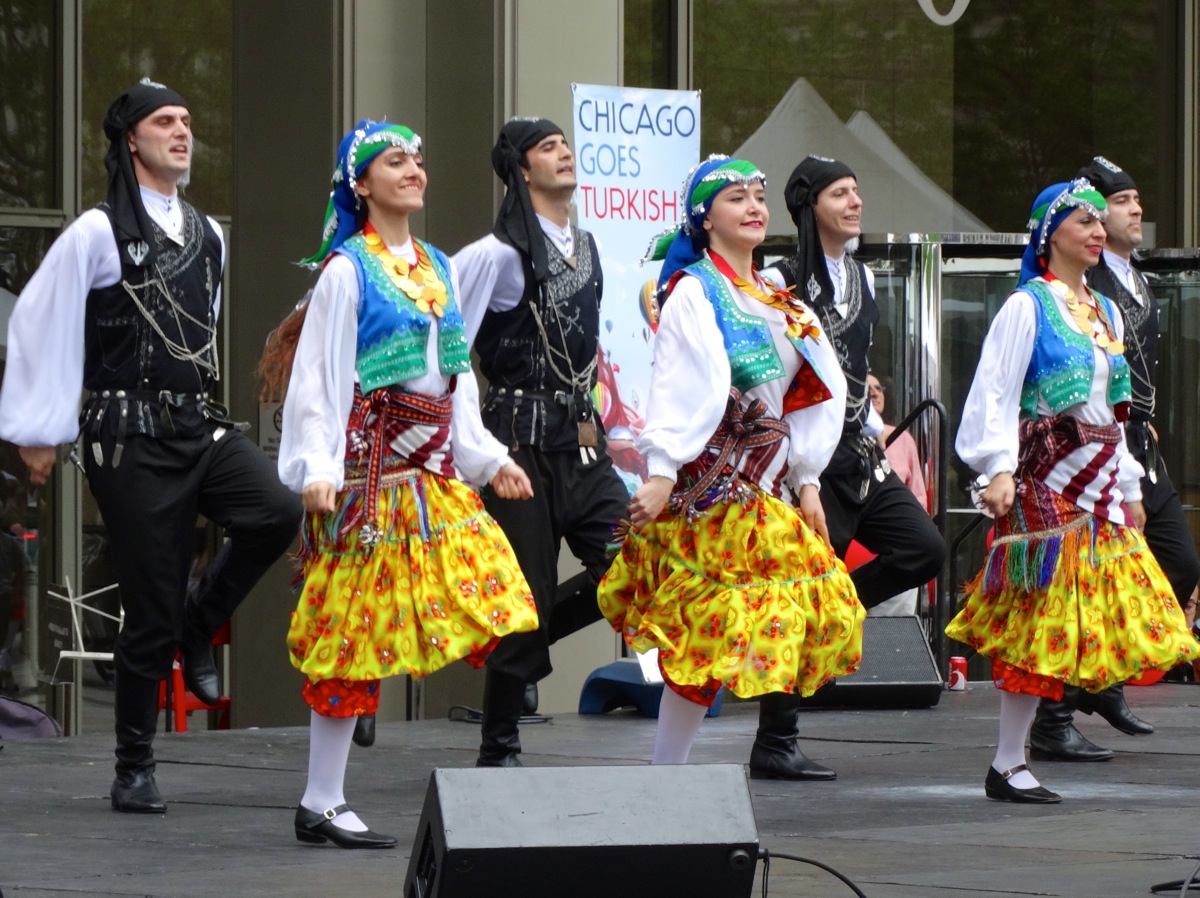 Love being in America but there are some things that drive you nuts, such as:

Numpties who serve you in shops or interface with the public. Very low level of training, intelligence or empowerment. I’m sure they’re not all thick as a Hill Billy in a rocking chair but management treat them as if they are – I blame Henry Ford.

Answering the phone when serving you. Do they not appreciate it as being just dammed ignorant and queue jumping.

Signs and directions, especially in car parks. They seem to all work on the principle that everyone knows this place so why bother with a sign telling you where things are.

Inconsistency of Turn on Red.

Positioning of Stop signs that seem to defy common sense and are confusing as to how many ways. 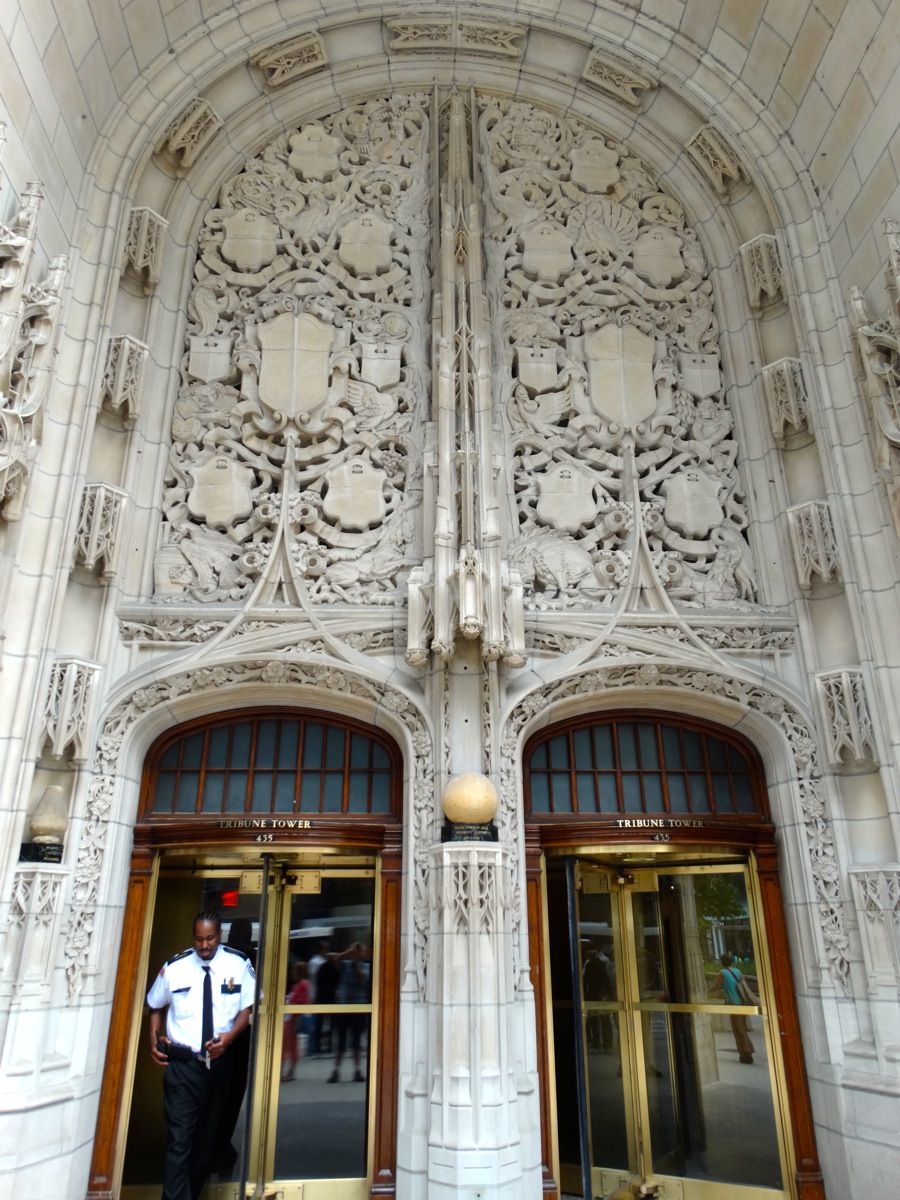 More laws in and around Illinois:

Jostling others is illegal.

No bicyclist may practice “fancy riding” on any city street.

No person may keep a smelly dog.

There is a $1,000 dollar fine for beating rats with baseball bats.

It is against the law to use a slingshot unless your are a law enforcement officer.

In a sudden but not surprising move last week, the Turkish parliament rushed through repressive legislation that, once approved by the president, Abdullah Gul, will restrict alcohol sales and drinking in Turkey.

The planned laws would ban retail sales between 10pm and 6am, ban all alcohol advertising and promotion, and stop new shops and bars from opening within 100m of schools and mosques. 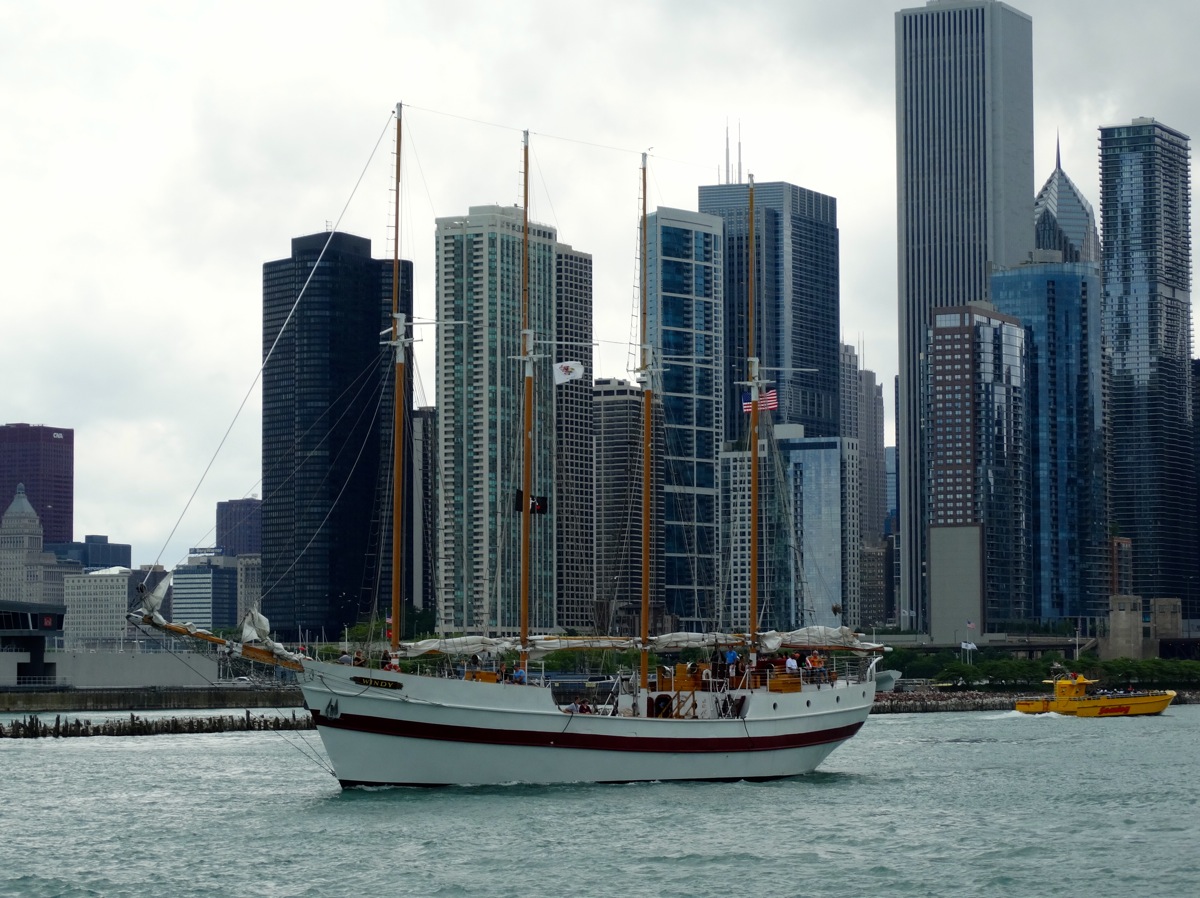 As is already the case with smoking, the depiction of alcohol consumption in films and on television would be blurred.

Well despite the Turkish Festival here the country was already on my list of countries not to visit because of draconian free speech laws but this just shows the way it’s going. Considering Turkey is a democratic, SECULAR, unitary, constitutional republic it seems strange. Mind you it is 97% Muslim, Allah forbid (that’s me on a Fatwas / death list) that they should ever be allowed to join the EU.

Women on checkout just loved my accent and wanted to talk to me all day. I actually think it was 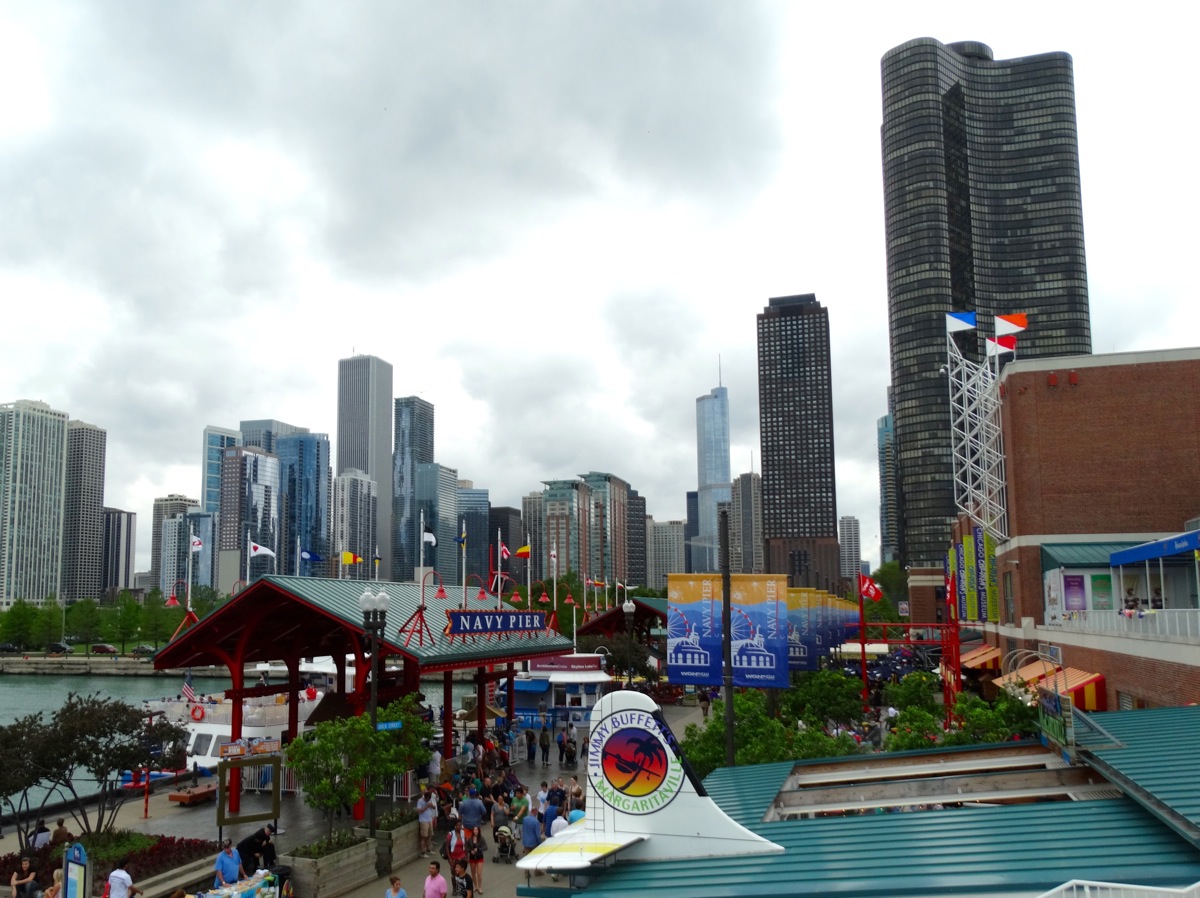 my young lithe body she really liked as she found it difficult, yet again, to believe I was over 21. Even my driving license was not enough, she had to call a supervisor, who had been specially trained, and was allowed to make a judgement call on my age. How insulting to the intelligence of your staff. Mind you what can you expect from a French owned store!

We were going to watch a team called the Cubs, I think they’re some sort of junior team, play a game of Rounders at Wrigley Field, but its a tad too overcast and cool.

Instead decide on a relaxing day in after we nip out for some supplies and wool for Wendy’s knitting. Fortunately Starbucks are designed with men in mind as they’re the perfect antidote for shopping. Sit and have a coffee and read whilst Wendy enjoys herself wandering around the shops examining every item; double checking sell by dates; having a strop about bad service; 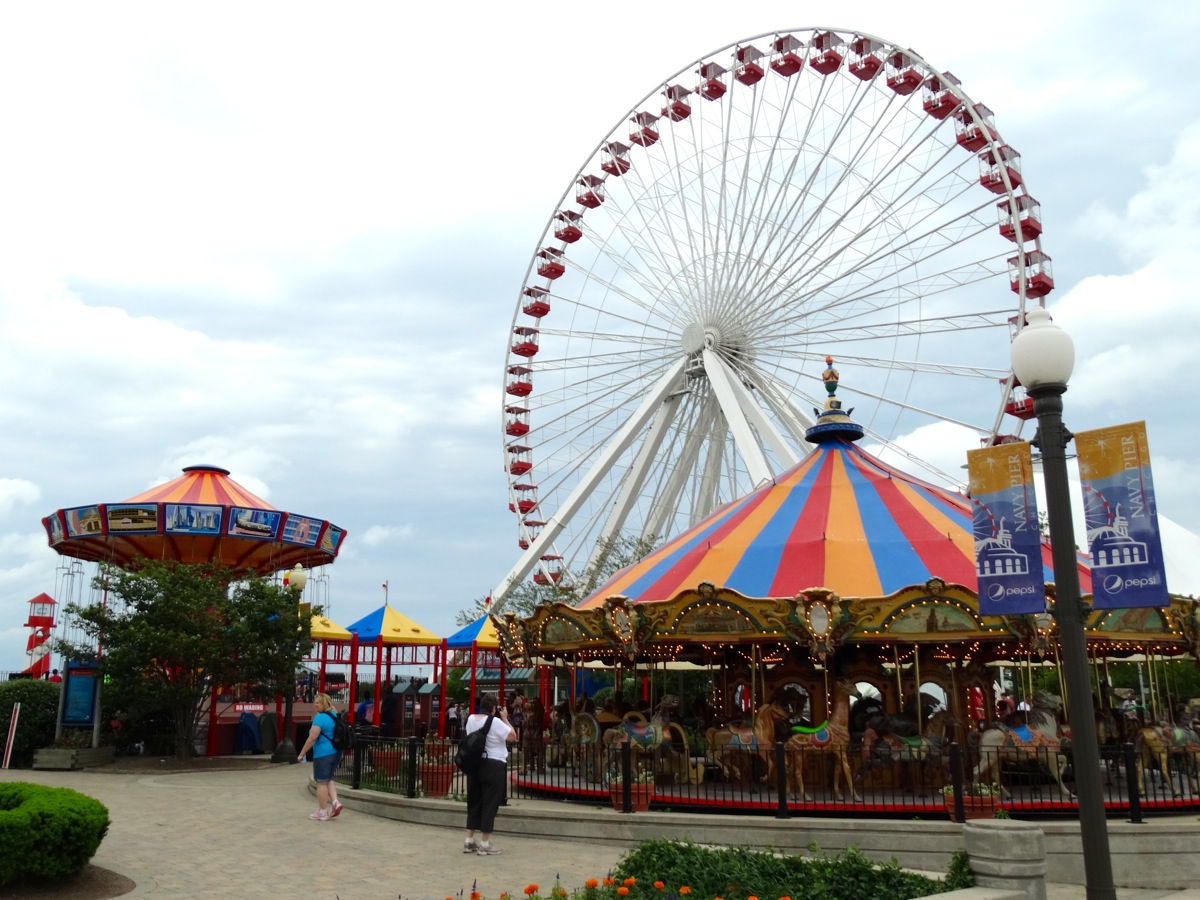 giving queue jumper / scrots the sharp edge of her tongue.

A rooster must step back three hundred feet from any residence if he wishes to crow.

Bees are not allowed to fly over the village or through any of Kriland’s streets.

Ice skating at the Riverside pond during the months of June and August is prohibited.

There is a ban on unnecessary repetitive driving on 23rd Avenue.

It is against the law to make faces at dogs.

You may not own a handgun.

Bet the NRA love the last one! 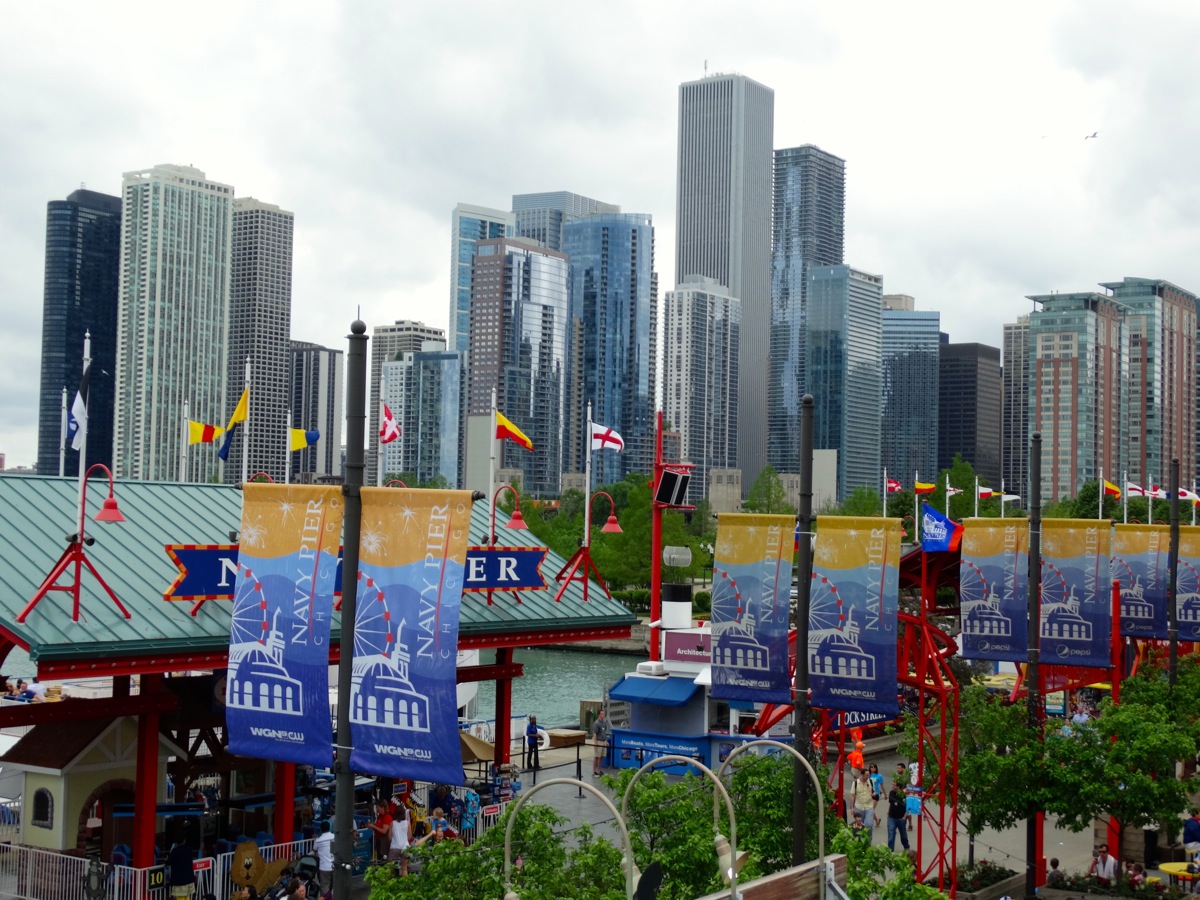 It posits that humans all bet with their lives either that God exists or does not exist. Given the possibility that God actually does exist and assuming the infinite gain or loss associated with belief in God or with unbelief, a rational person should live as though God exists and seek to believe in God. If God does not actually exist, such a person will have only a finite loss (some pleasures, luxury, etc.).

The philosophy uses the following logic: 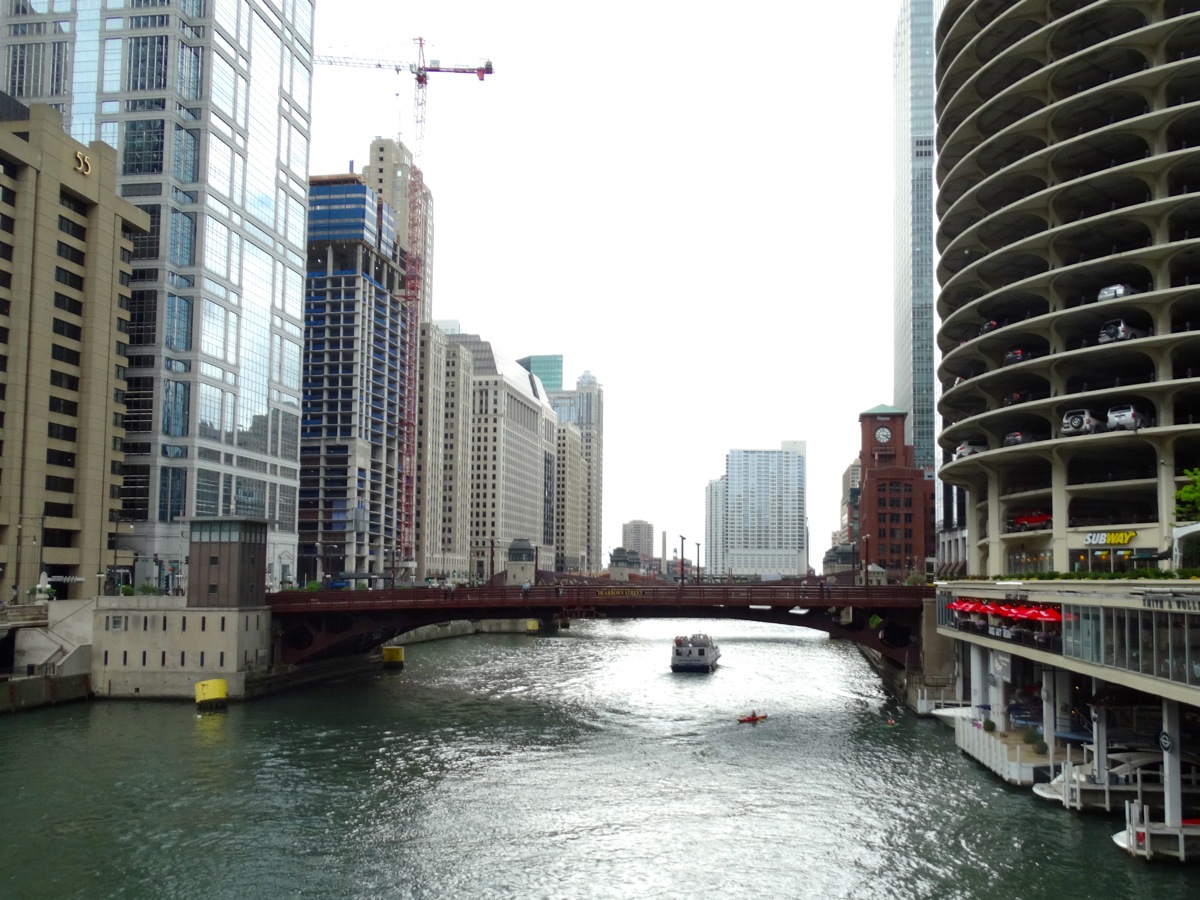 “God is, or He is not”
A Game is being played… where heads or tails will turn up.
According to reason, you can defend neither of the propositions.
You must wager. (It’s not optional.)
Let us weigh the gain and the loss in wagering that God is. Let us estimate these two chances. If you gain, you gain all; if you lose, you lose nothing.
Wager, then, without hesitation that He is. (…) There is here an infinity of an infinitely happy life to gain, a chance of gain against a finite number of chances of loss, and what you stake is finite. And so our proposition is of infinite force, when there is the finite to stake in a game where there are equal risks of gain and of loss, and the infinite to gain.