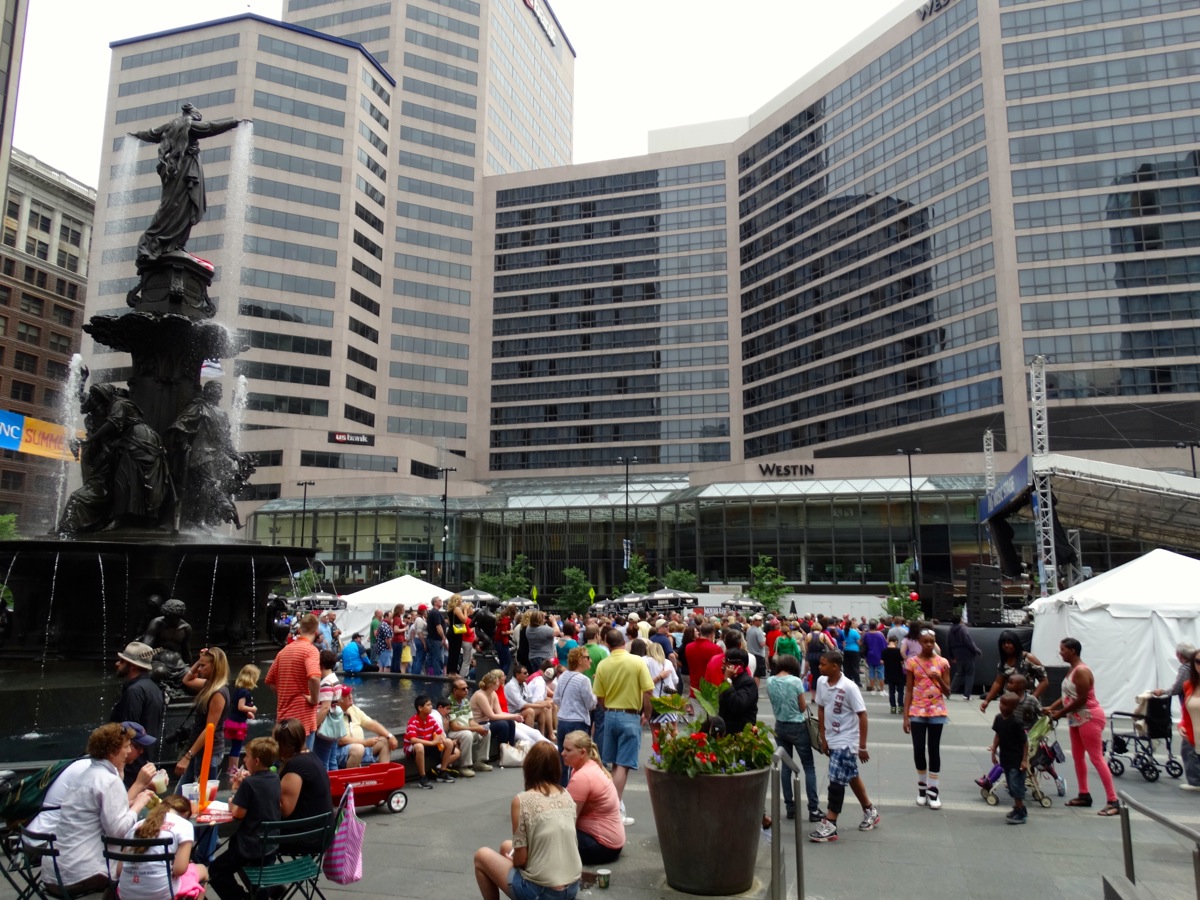 Depart Louisville for a short two hour drive up to Cinncinati.

Arrive at lunch time to yet another hotel. This time it’s a Quality Inn & Suites. We’ve got a lovely 3 room suite, kitchen, lounge and separate bedroom. Two nights free with our loyalty points but would only have been about $90 anyway. Includes breakfast.

But with all Choice Hotels these days we have started to develop our own Quality Control Checklist that we apply before accepting a room: 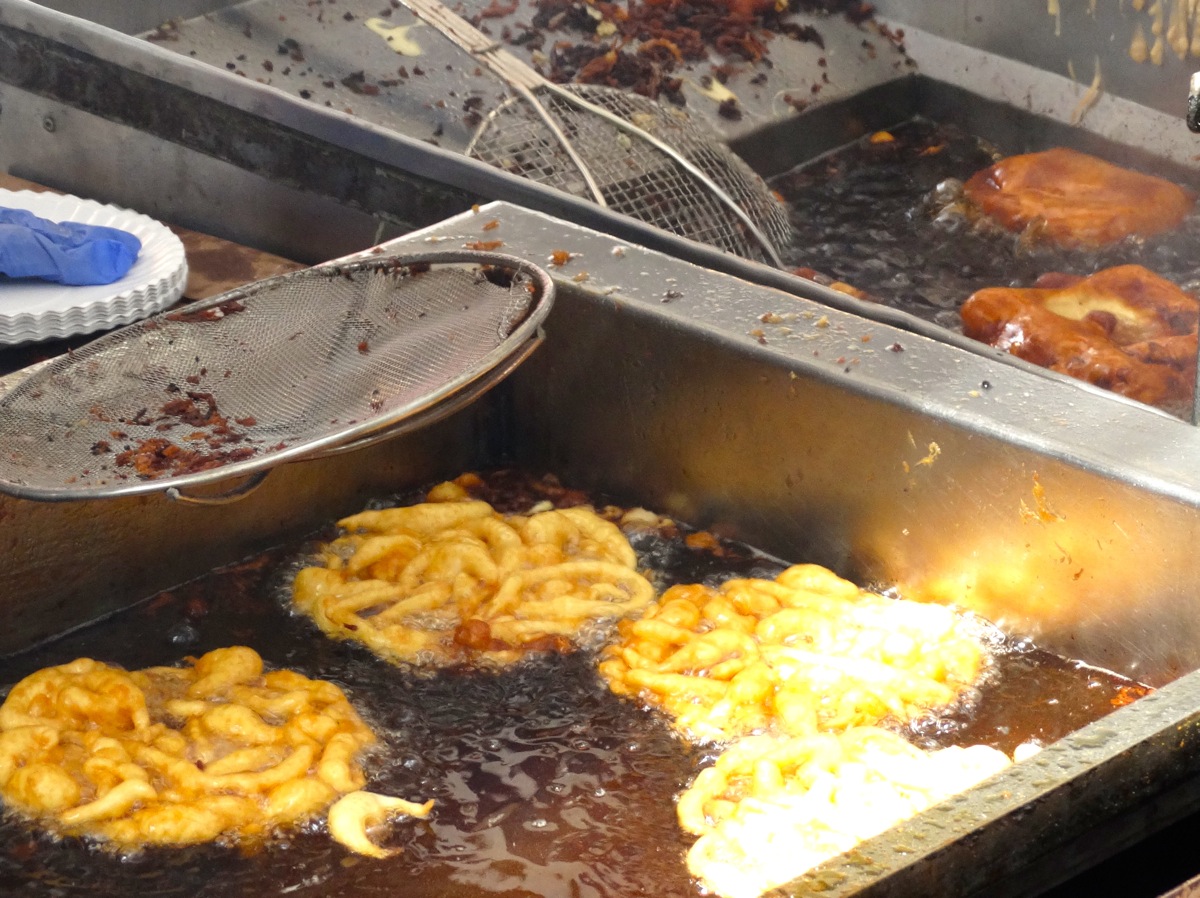 1 Does WiFi work and is it a reasonable speed?

2 Is the room noisy?

4 Does the room stink?

8 Taps work and water is hot? 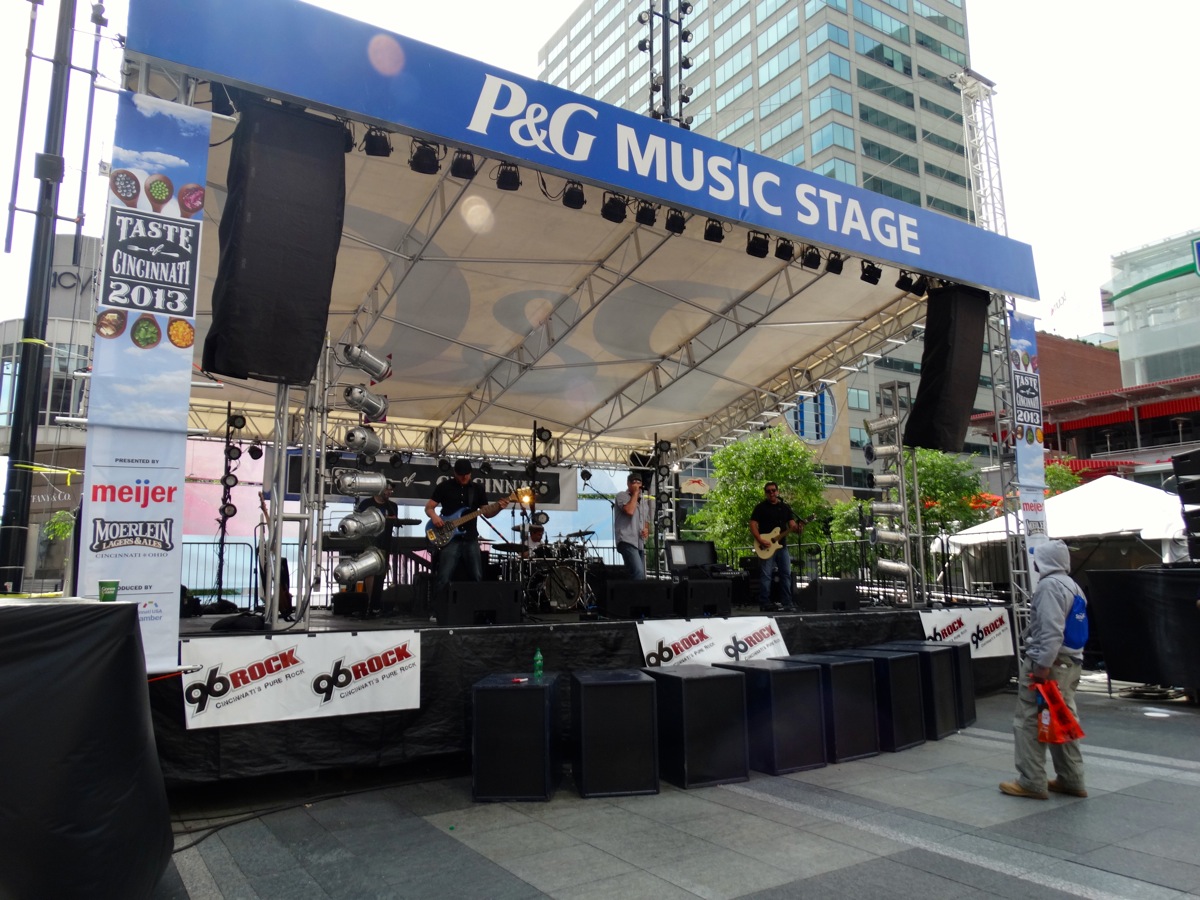 11 Is there an iron and ironing board?

Sadly items 1 to 11 are based on our last 8 Choice Hotel stays.

Drive down town to visit Fountain Square and Downtown area. There’s a “Taste of Cincinnati” event on. Culinary extravaganza and live pop groups. The place is hopping.

It seems that the speciality cuisine here in Cincinnati is “Deep Fried”. Try two cholesterol specials 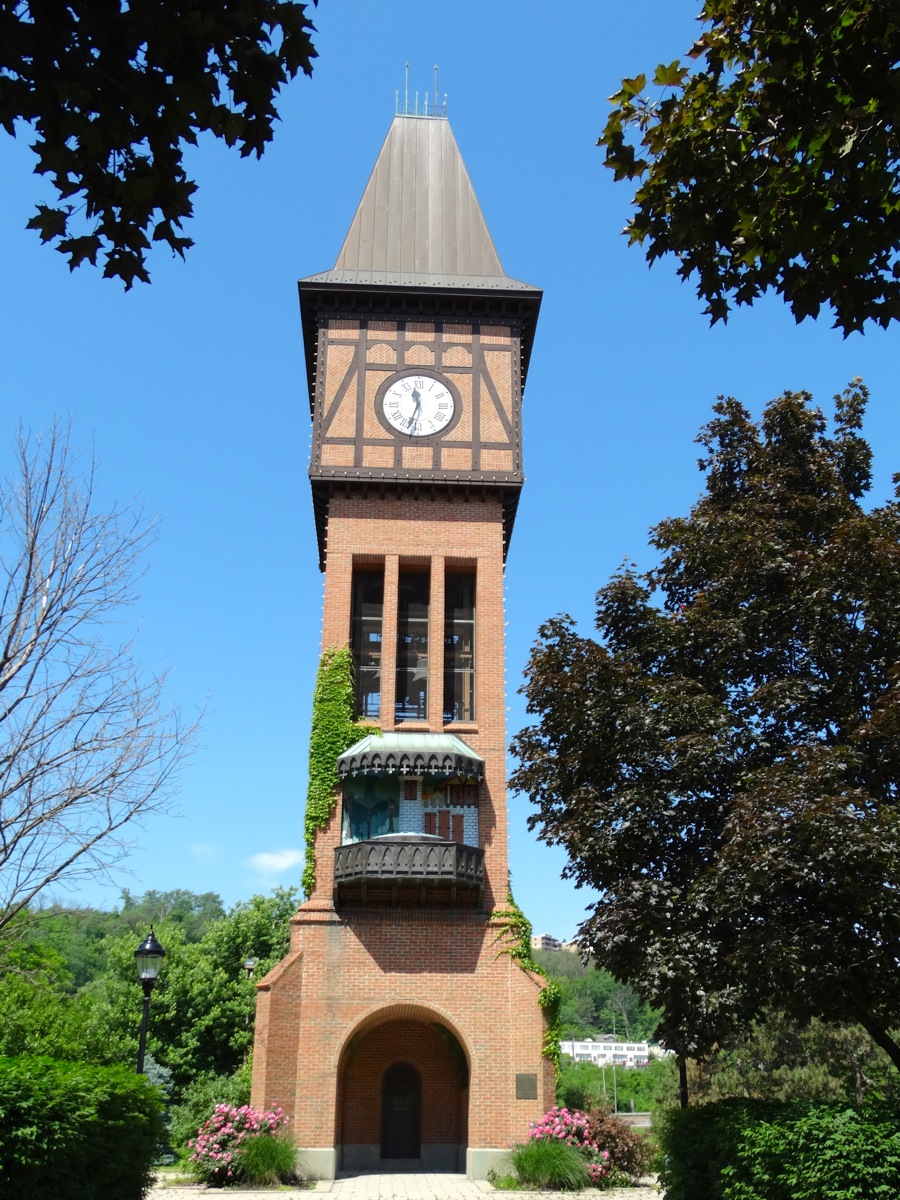 Enjoy a pleasant afternoon in the sun.

What is it with car parks in America. Most of them are just dodgy bar stewards who keep their prices hidden until you’re well inside and it will be difficult to reverse out. Here in Cincinnati they have the ultimate rip off scheme. Sign says $1 parking. Sounds good. Oh but what they omitted to mention it’s $1 per 20 minutes. Marketing men try and screw joe public yet again. 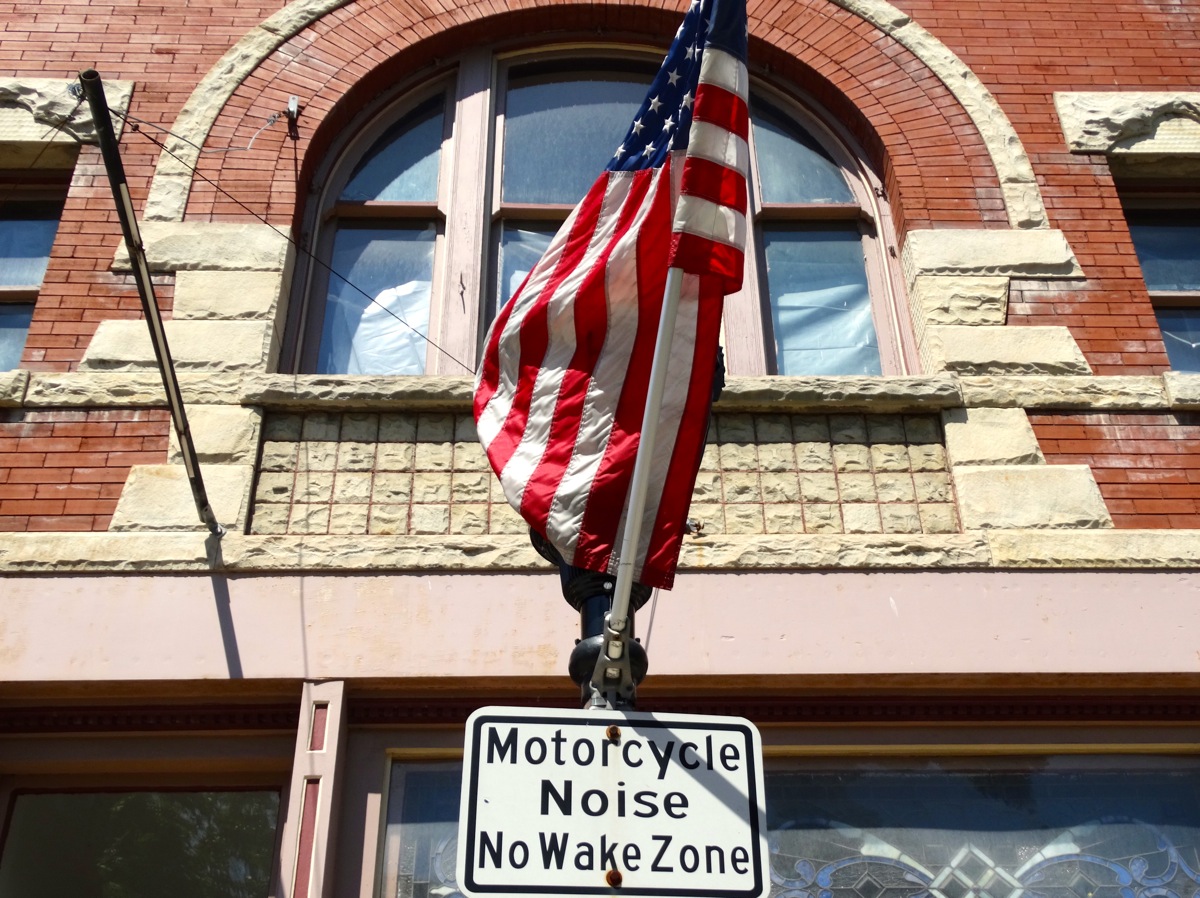 Book our flights on Virgin to Florida ready for our Marco Island trip.

Some crazy laws in Indiana:

State government officials who engage in private duels can be dismissed from their post.

A person must get a referral from a licensed physician if he or she wishes to see a hypnotist unless the desired procedure is to quit smoking or lose weight. 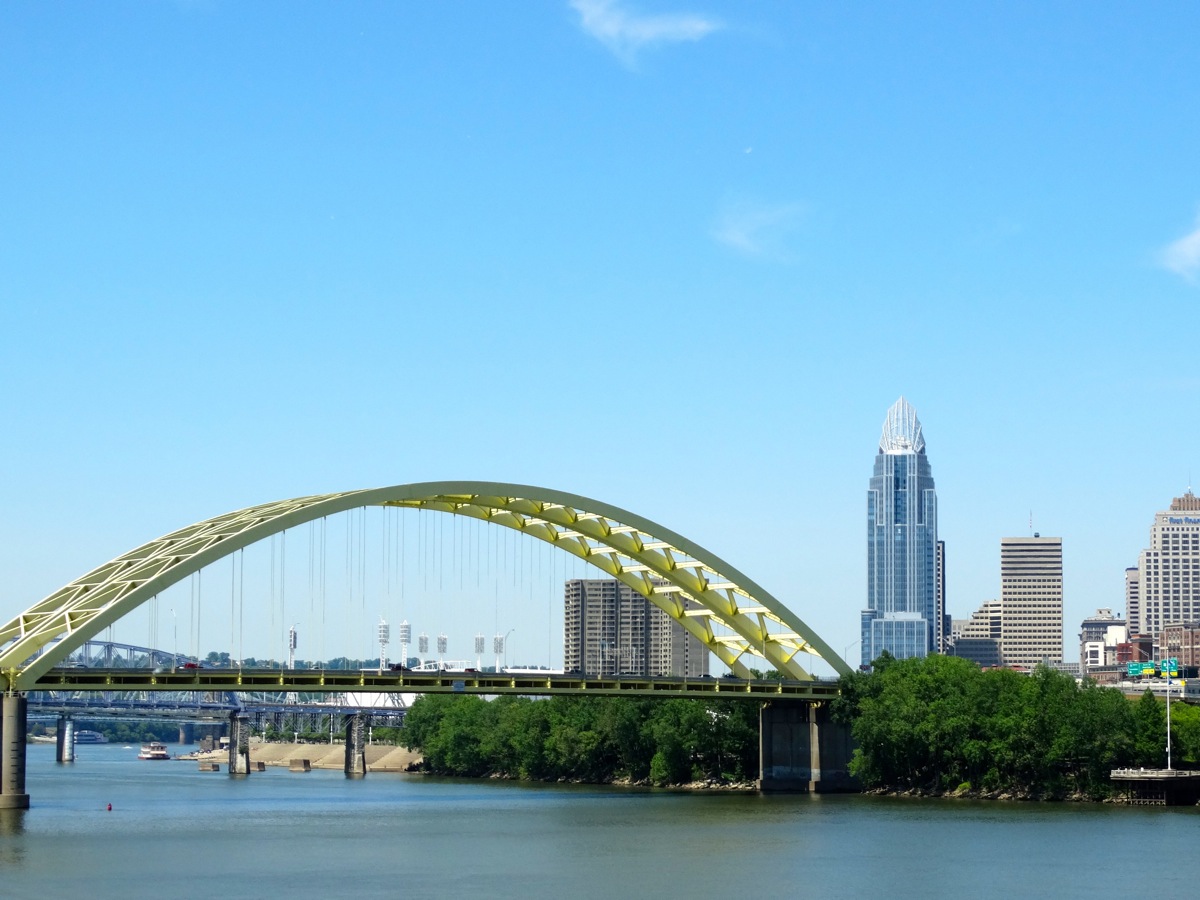 All males 18 to 50 years old must work six days a year on public roads.

Baths may not be taken between the months of October and March.

Check forgery can be punished with public flogging up to 100 stripes.

Swedish parking laws, however, continue to be rigidly enforced despite the increasingly chaotic situation. Early Wednesday, while documenting the destruction after a night of rioting in the Stockholm suburb of Alby, a reporter from Fria Tider observed a parking enforcement officer writing a ticket for a burnt-out Ford. 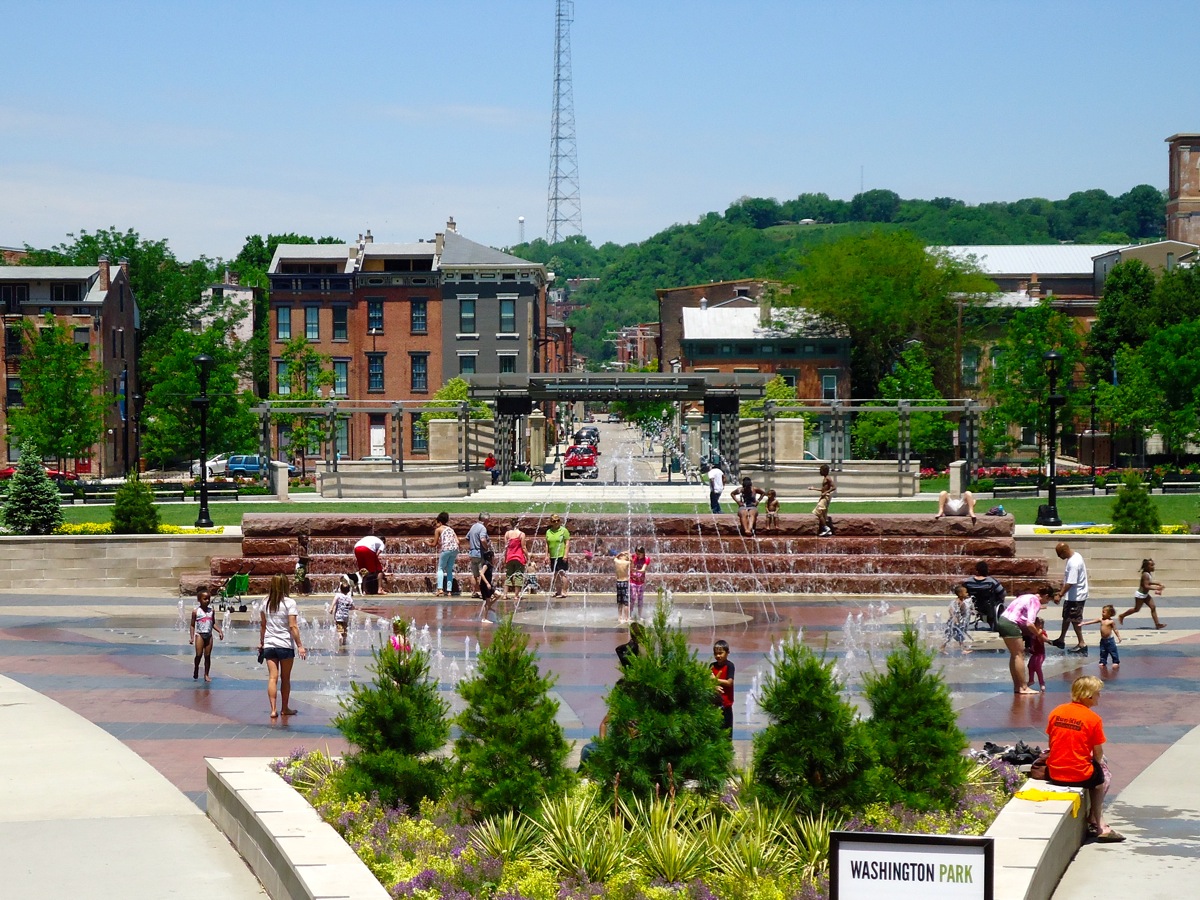 When questioned, the officer explained that the ticket was issued because the vehicle lacked a tag showing its time of arrival. The fact that the vehicle had been effectively destroyed – its windshield smashed and the interior heavily damaged by fire – was irrelevant according to the meter maid, who asked Fria Tider’s photographer to destroy the photos he had taken. Her employer, the parking company P-service, refused to comment when Fria Tider contacted them on Wednesday afternoon. 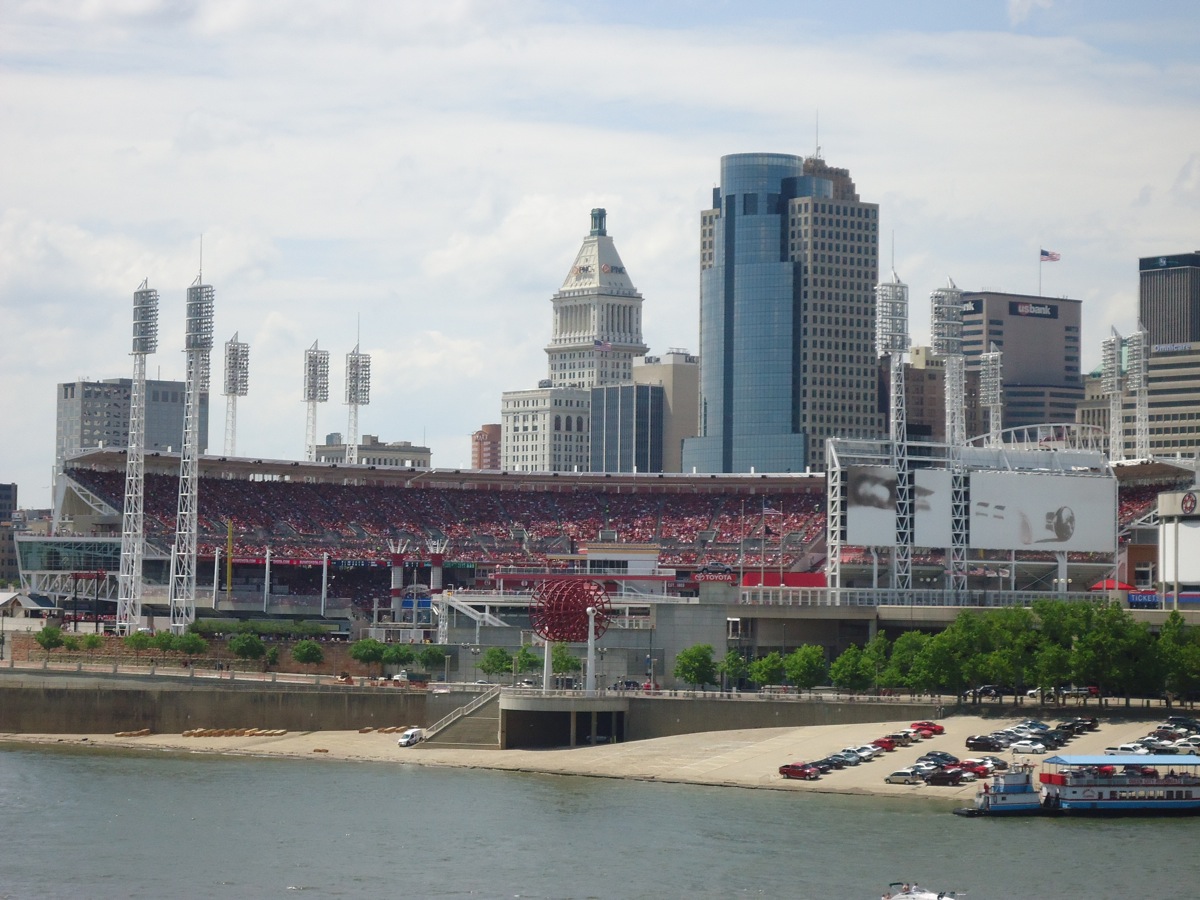 Drive down to Kempton and have a drink by the river.

Visit Washington Park. A lovely modern park with fantastic water fountains for kids to play in; a special area for dogs; a modern and safe playground for kids. Have our extravagant lunch watching everyone having fun. It also seems that every evening there is a concert or something going on in this park. Young guy asks me how I’m going and I ask him back. What a lovely reply  I 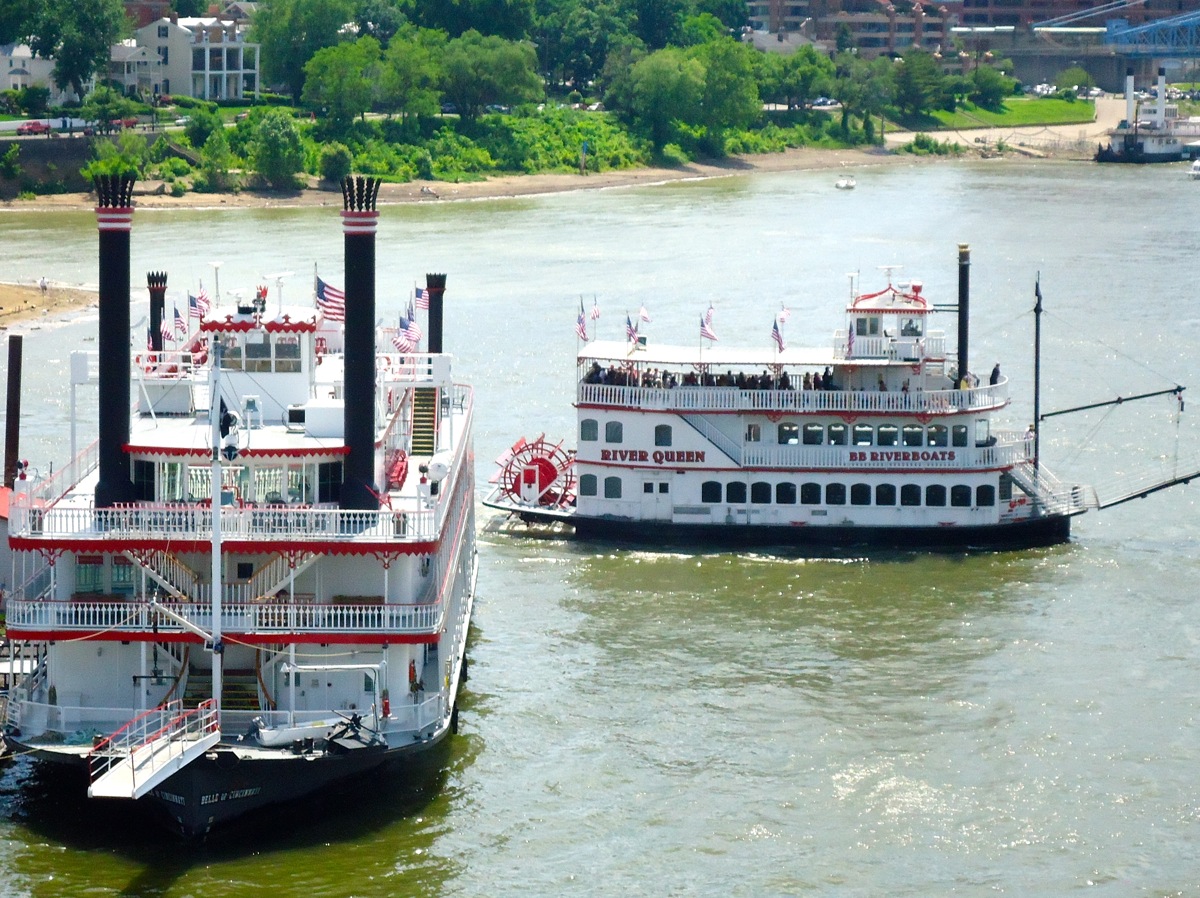 get “I’m just peaches , thank you for asking”.

Wanted to go to the Cincinnati Museum at Union Station. It’s mentioned more times than there are Talibans at a stoning but no hint of an address. What a load of numpties! But alas like the Freedom / Underground Railway museum it’s closed for Memorial day. Perhaps in one of these towns we’ll eventually get to visit one of the many Civil Rights / slavery Museum. So we do the American thing and go to the Mall.

Drive down to the Mall at Kempton for a coffee, at you can guess where. Then a stroll across the two bridges and back. The roar of the crowd and fireworks at the Rounders game can be heard all over the riverside.

Then the highlight of the day, final confirmation that we’ve survived and escaped from the lunacy 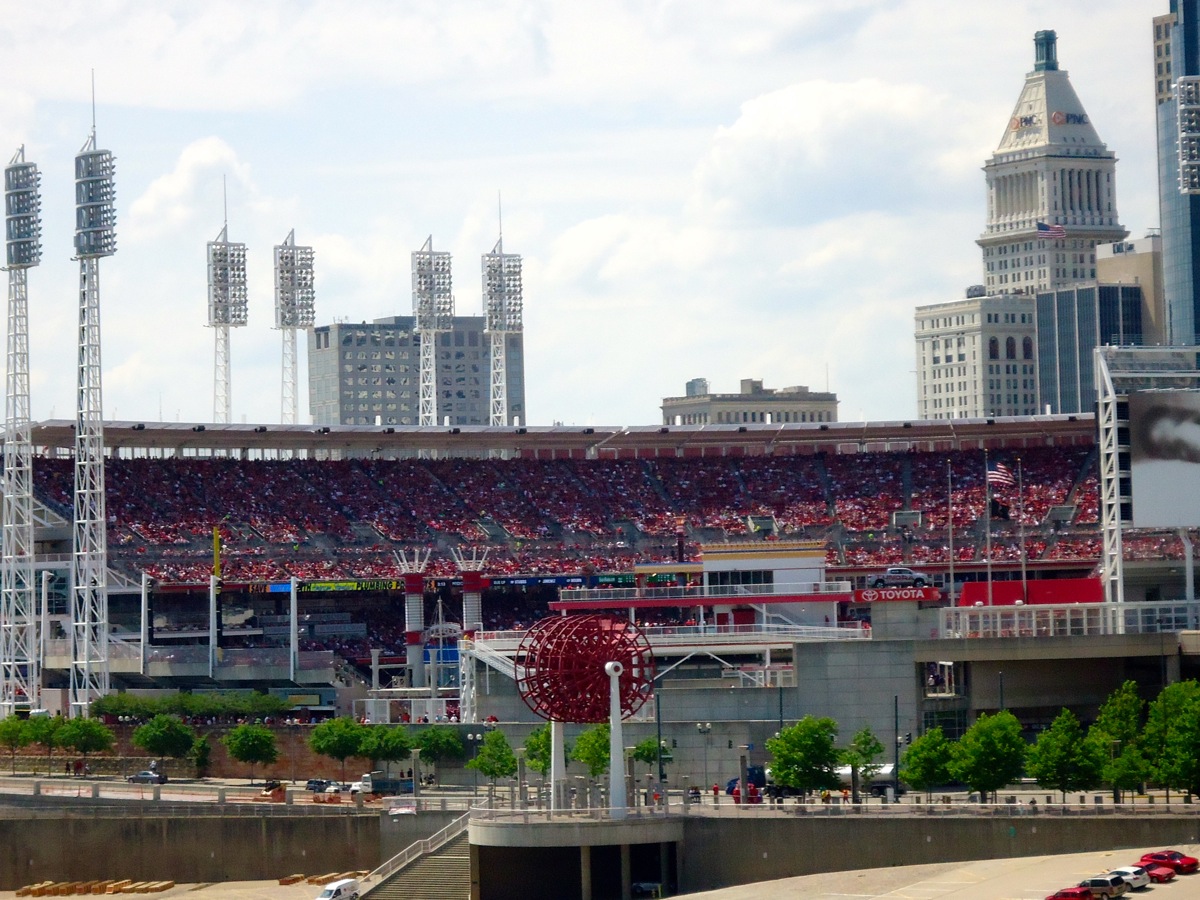 of the Bible belt, as we visit the Hofbrau House – the first one in America, must be the strong German influence around here. Dinner of Bayerisch Scweinbraten, Sauerkraut, Potato Dumplings and who can resist a Hofbrau. Hallelujah! Civilisation at last and unlike the miseries in Tennessee  they’re friendly around here.

Wendy has to drive home. Brave.

Mustaches are illegal if the bearer has a tendency to habitually kiss other humans.

It is illegal to sell cars on Sunday. 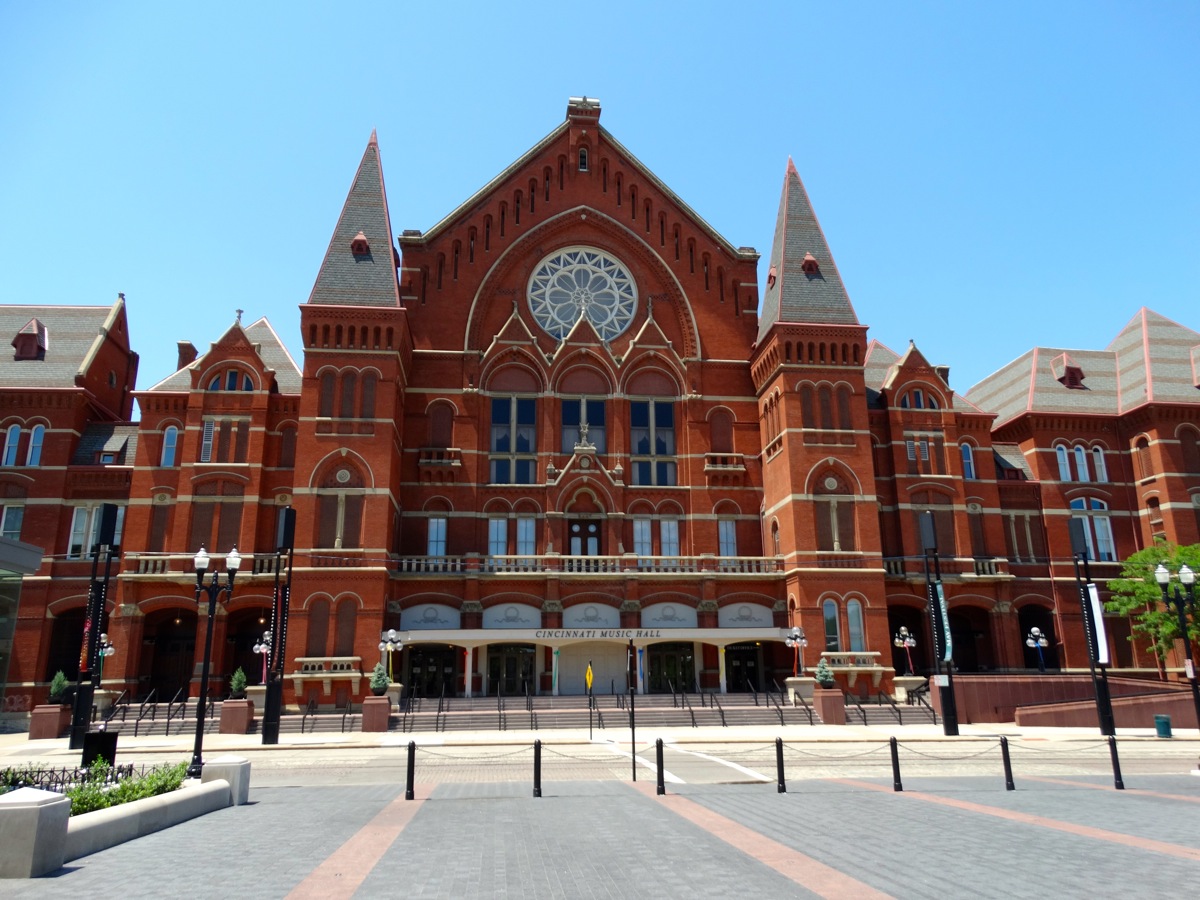 Pedestrians crossing the highway at night are prohibited from wearing tail lights.

No one may catch a fish with his bare hands.

A man over the age of 18 may be arrested for statutory rape if the passenger in his car is not wearing her socks and shoes, and is under the age of 17.

Men are prohibited from standing in a bar.Turkish blogger jailed for a year for blasphemy

Hate preachers will be banned from British television, Theresa May signalled last night. 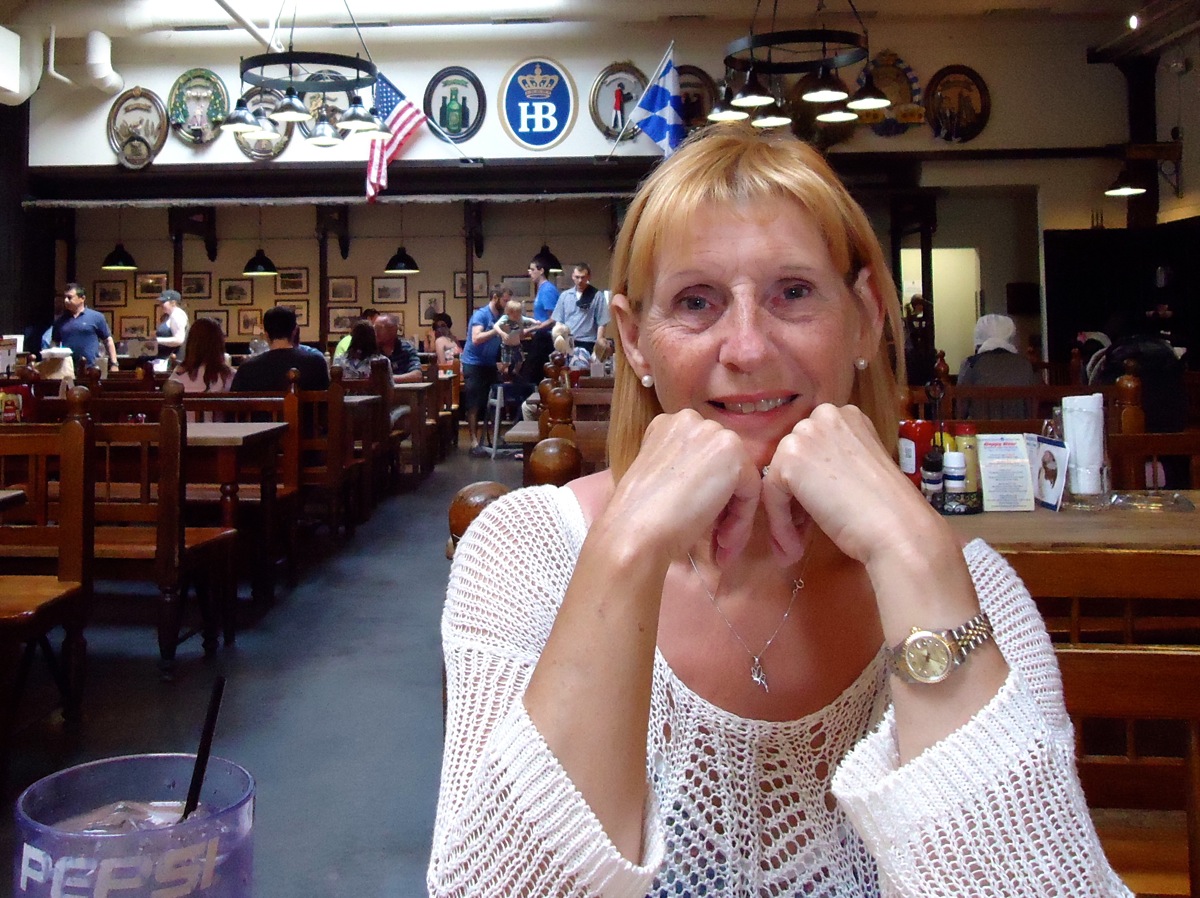 The Home Secretary condemned the BBC and other broadcasters for interviewing disgusting extremist cleric Anjem Choudary after the murder of soldier Lee Rigby. May said she will ask TV censor Ofcom to step in.

Under plans to be drawn up by a new task force on extremism, Ofcom is expected to be given powers to stop hate preachers appearing on television. At the moment the censor has the power to intervene only after an inappropriate broadcast has been made.

The move is the most dramatic attempt to gag extremist views since the Thatcher government’s 1988 ban on IRA spokesmen being heard on television, which led to the words of Gerry Adams being read out by an actor. 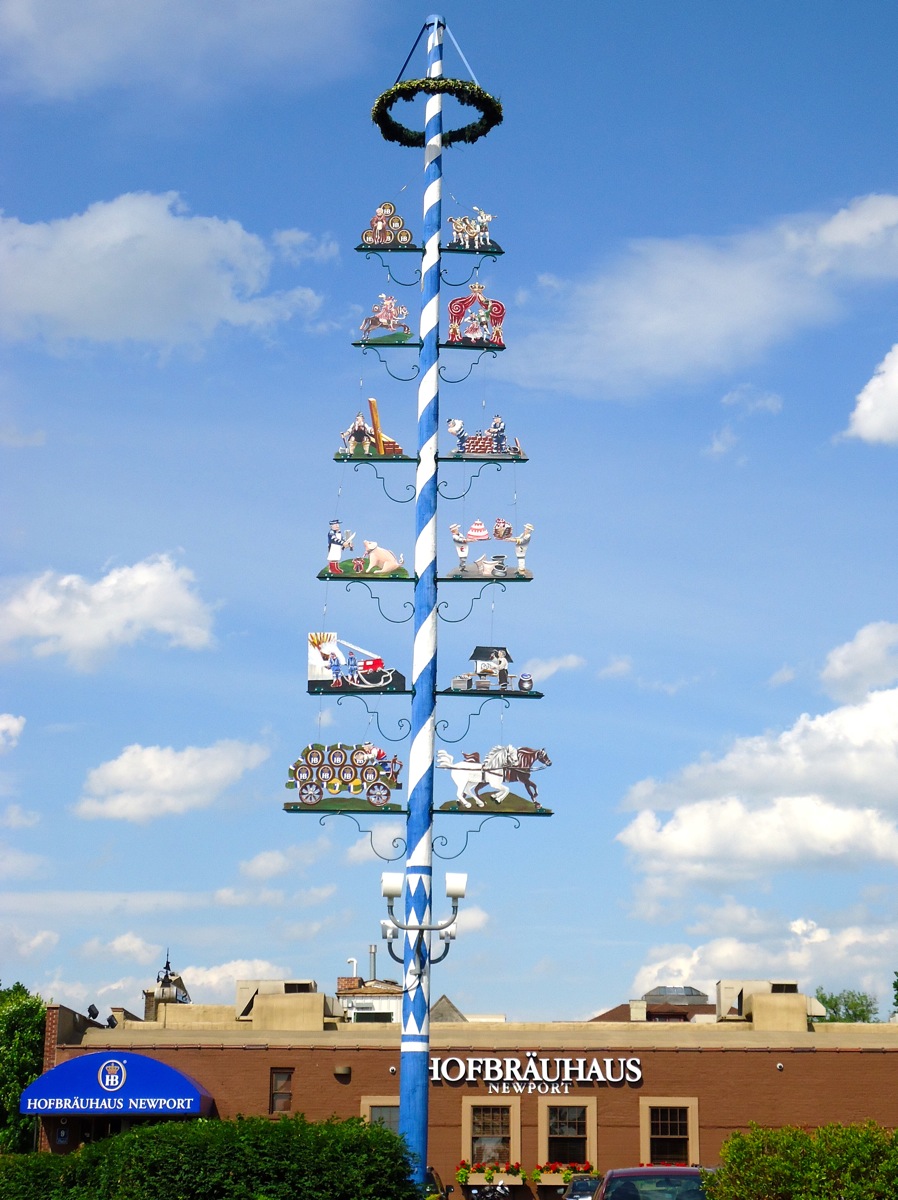 Mrs May said it was inappropriate to interview Choudary – who helped form the now-banned Islamist groups Al-Muhajiroun and Al Ghurabaa and is accused of helping to radicalise several terrorists – in the wake of Drummer Rigby’s death.

If this is the case why isn’t he under arrest awaiting trial. We watched this interview and he is an arsehole. The clowns in Parliament should be ashamed that he is still wandering around. I’m all for the rule of law etc., but common sense says enough is enough. It amazes me that the EDL or some other extremist organisation hasn’t taken this geezer out.

Fed up with Hate Preachers and the ineptitude of the clowns in parliament in getting shut of them. The ancient Greeks had the answer. Ostracise. It was a procedure under the Athenian democracy in which any citizen could be expelled from the city-state of Athens for ten years. While some instances clearly expressed popular anger, it was used as a way of neutralizing someone thought to be a threat to the state or potential tyrant. Each year we could vote and the top 10 most objectionable citizens could be kicked out. Problem solved. Simples.