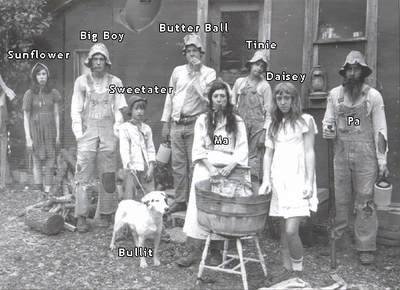 We escape Hill Billy country (picture of our neighbours), we think, and drive 200 miles up to Nashvile. Pleasant drive.

Interesting billboard “Make your man happy”. How? Sex? A nice meal? Wine – forget that this is Tennessee? All wrong. Buy him a razor sharp, lethal bowie knife.

Book to go to the Grand Old Opry at the original Ryman Hall.

Have a walk around Broadway, the music district, and then have dinner in one of the many live music bars. Pork Loin on Texas Toast, well looks more like thick bacon, at least its not that thin bacon that shatters like broken glass when you cut into it. Two girls are sat in the corner playing guitars and screeching for tips. If I wasn’t deaf before I certainly am 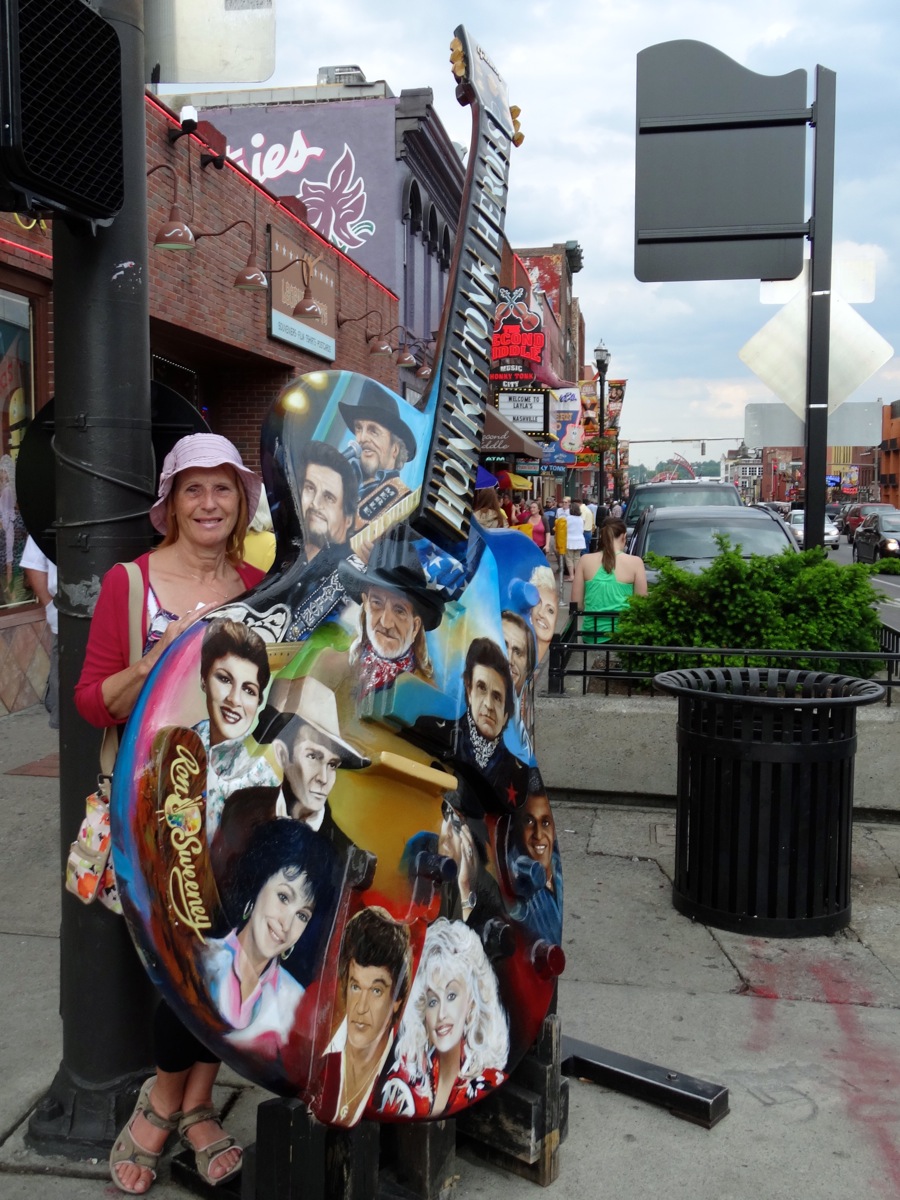 The Grand Old Opry show has a selection of Country and Western stars, most of whom we’ve never heard of but the rest of the audience seem to know them. At least we have heard of Crystal Gale. Ironically, we’re probably the only ones there who aren’t rabib Country and Western fans, yet we’re approached before the show to see if we’d like to go up on stage; brief interview with Larry Gatlin; then seats on the stage for the performance; free popcorn; free giant Pepsi’s. We go for it, it would be a sin not to. 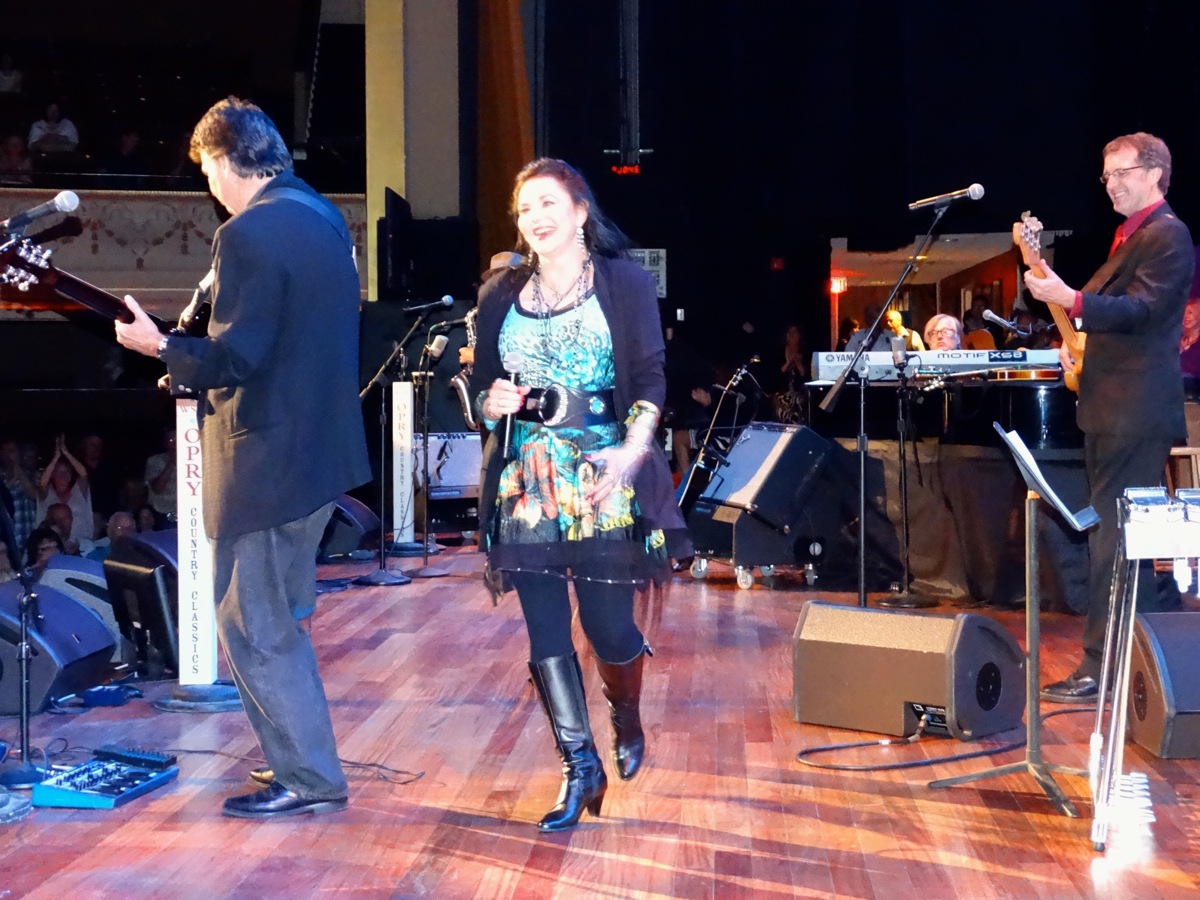 About 15 minutes into the performance this tall gaunt looking geezer, who’d give any child under the age of 10 nightmares, starts doing an advert for Cracker Barrel at lightning speed with an accent so strong you could bottle and sell it  – we’re incredulous and crack up laughing.  It’s a miracle we even picked out the word Cracker Barrel. What’s wrong with this country. You pay to go to a concert and you still can’t escape their inane adverts. Turns 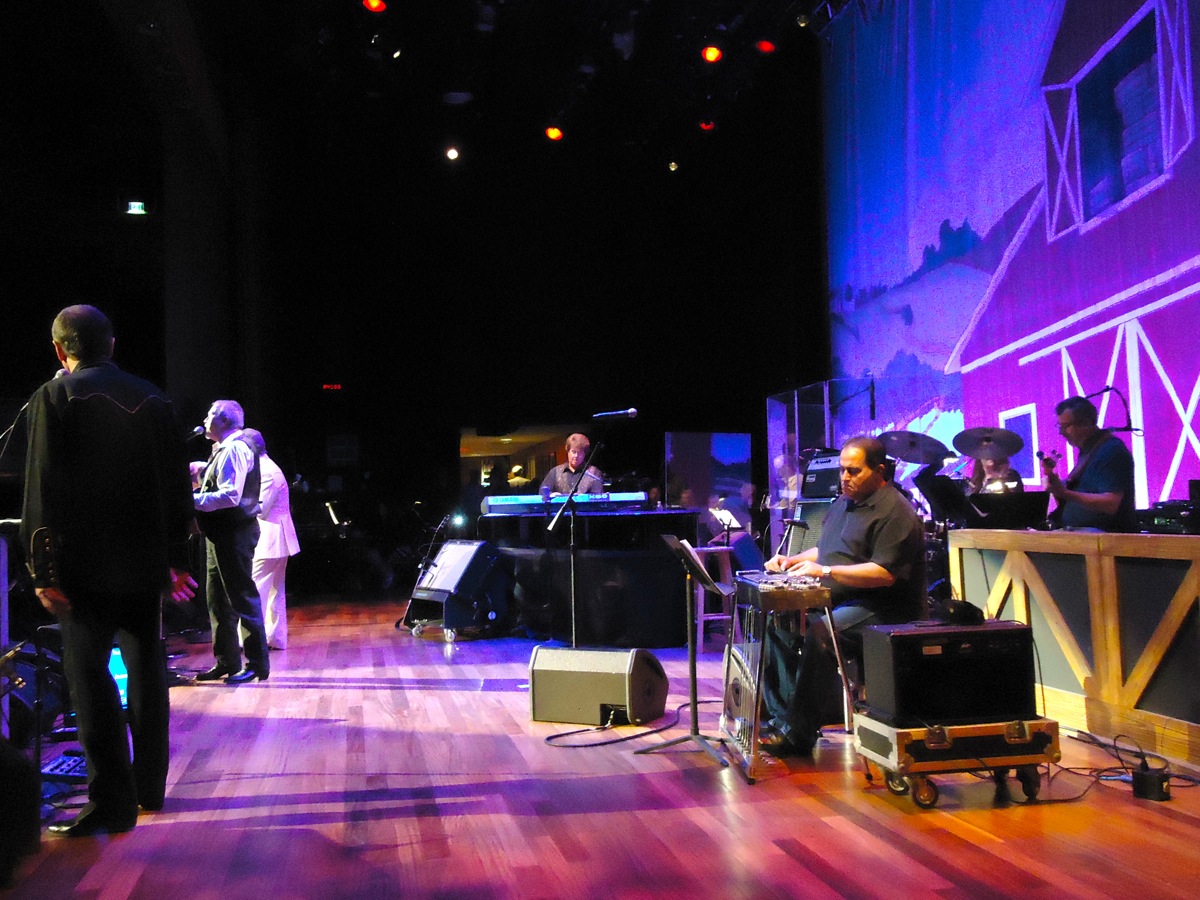 out the whole show is going out on WSM radio.

Larry introduces us as some folks from “Good olde England” and escorts us onto this hallowed stage, Elvis, Dolly and Johnny Cash to name but a few trod on these very same boards we’re now on. Larry’s a tad disappointed when Wendy answer his “What have we seen in Nashville?”, with “well we’ve been to New Orleans but actually we’ve only just got here”. The “actually” goes down a treat. Escorted to our luxury, on stage seats – at least they have cushions rather than the hard Church style pews. An interesting experience, not only are we on the stage at the Grand 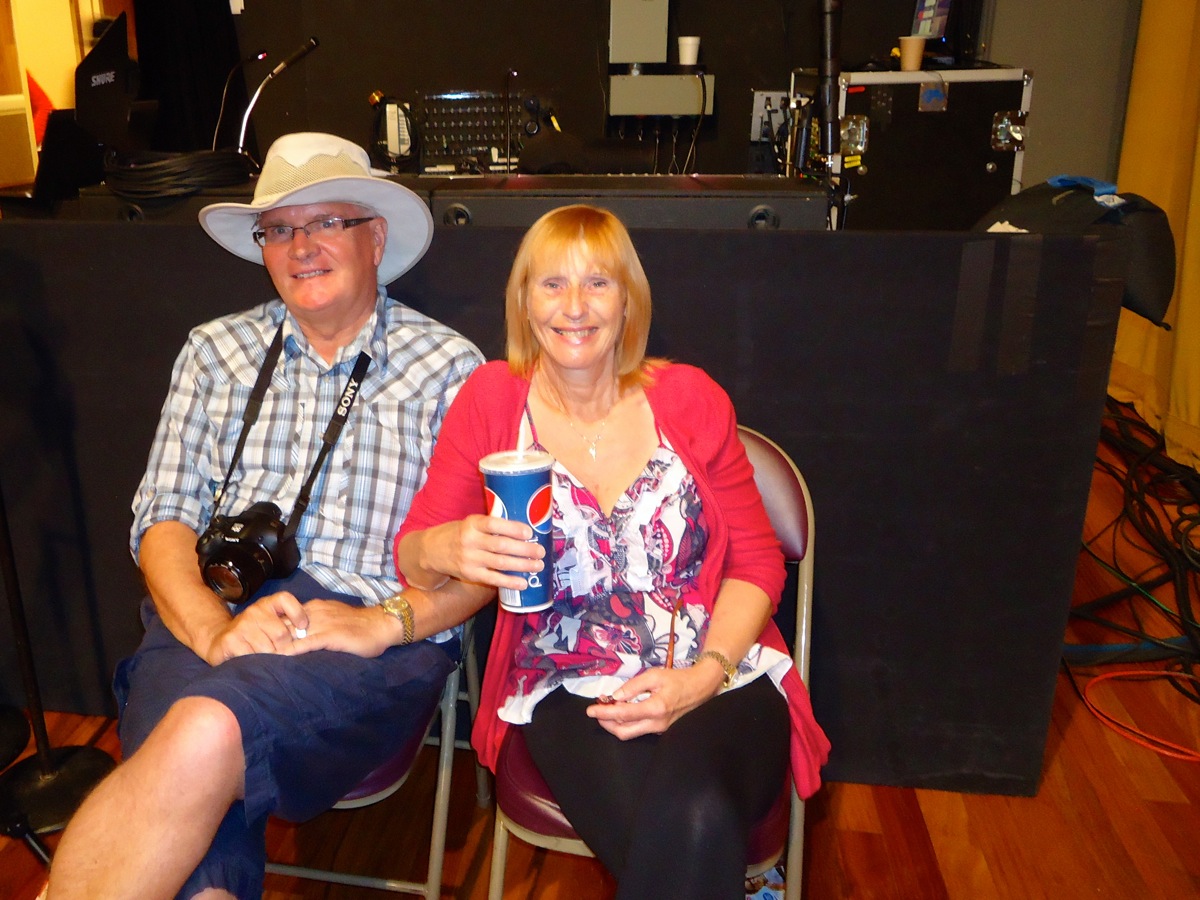 Old Opry but we’re on National radio as well. Fame at last.  For some obscure reason Wendy gets Crystal Gayle’s autograph – not that you can read it.

Good show but they manage to bring a bible thumping session by singing gospel songs on demand, really gets all but two of the audience going – thank the lord, hallelujah!

By the time we get out, Broadway is really buzzing.

Drive back to the hotel with the hinderance of a dyslexiic SatNav system that thinks we’re on a pushbike and decided to takes us a circular ride around Nashville – ignore her. 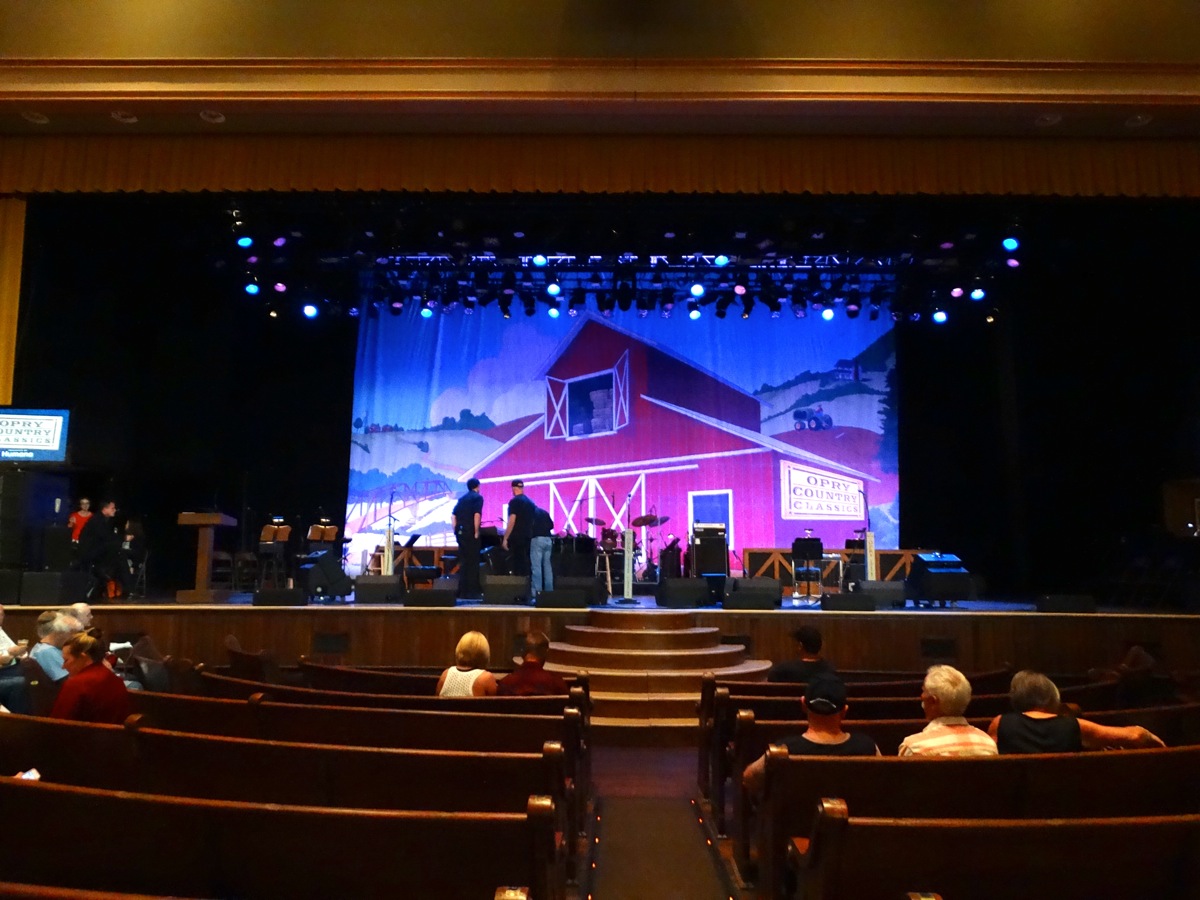 Friday – wet and grey but warm.

Drive up to Mammoth Cave National Park, a mere 80 miles away. Not only another great National Park; free; great visitors centre, even free wifi; a World Heritage site; a biosphere reserve. Of course there has to be a superlative, it’s twice as long as any known cave.

Pity it was raining but good day to be underground. I did a 2 hour guided tour of the caves. I’ve had some great ranger led tours but this has to be the tops. Superb narrative; mixture of great scientific facts / explanation; fascinating history of the 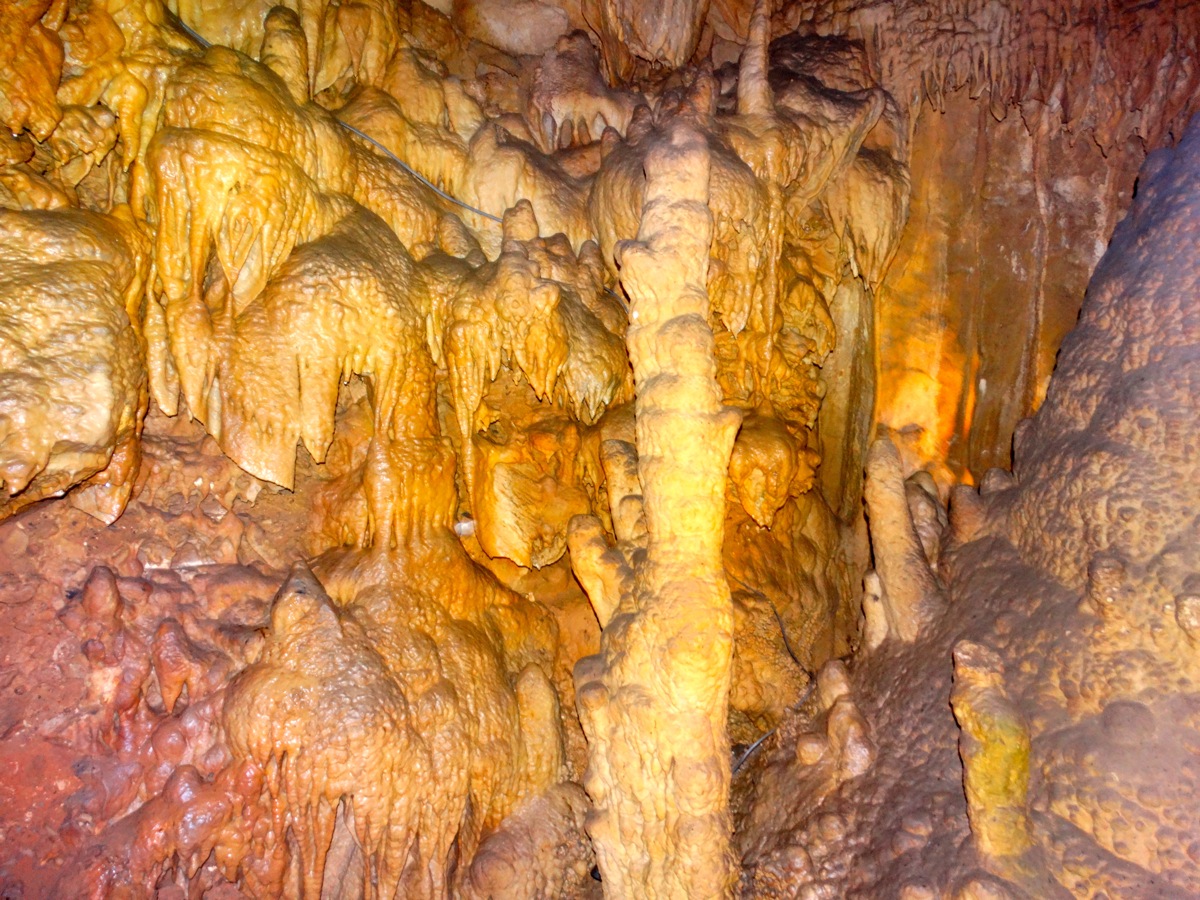 founder;  answers to questions; safety talk. Wendy passed on it and given the narrowness and difficulties of the tour it was a good job she did – certainly not for the claustrophobic. Interesting to think how most Americans dealt with the FACTS of a 400 million year old cave system. Can the Bible belt cope with such heresy?

Joy, still in the dry Bible belt. Finally found a liquor store. Hello America this is the 21st century. To top it all there’s more gun shops. Obviously the Bible bashers are ok with a bit of senseless killing – even on a Sunday! And to top it all I wanted an alcohol free beer down in Nashville yesterday, but stood more chance of buying a bible in a 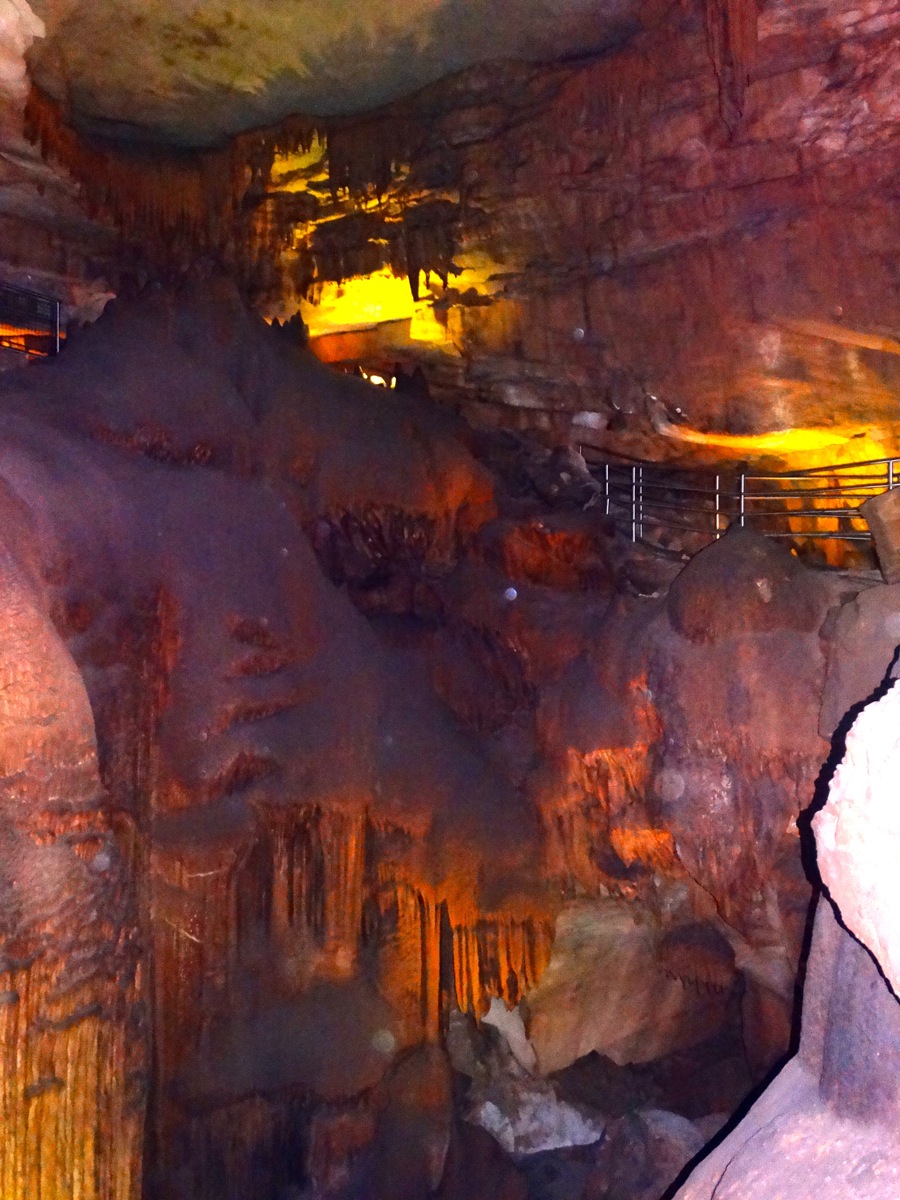 Sure can tell we’re still in the Bible belt, can’t even go for a pee without religion intruding, there over the urinal is a picture of Jesus on the cross with “He suffered for us”. Mind you can you imagine the riots and deaths if that had been a picture of Mohamed!