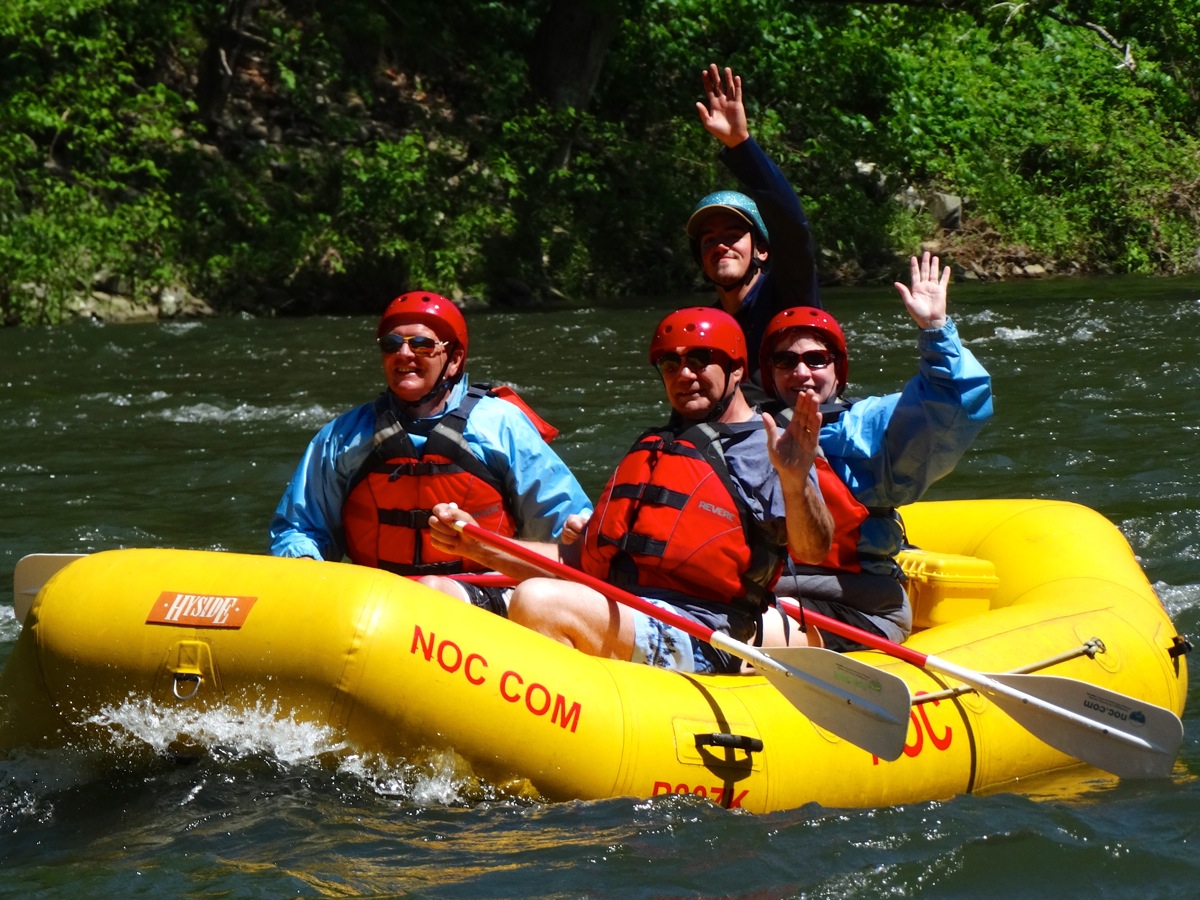 Whitewater rafting today, although Wendy gives it a miss. Drive over to Hartford NC. Downtown consists of a restaurant and a garage but it’s classed as a town.

In case you’re wondering in the pictures I’m the one not smiling or waving – you might have guessed.

Rafting the Upper Pigeon Forge river, a class 3 – 4 river and today the waters high, as there’s been plenty of rain, so we get a fast and turbulent ride. 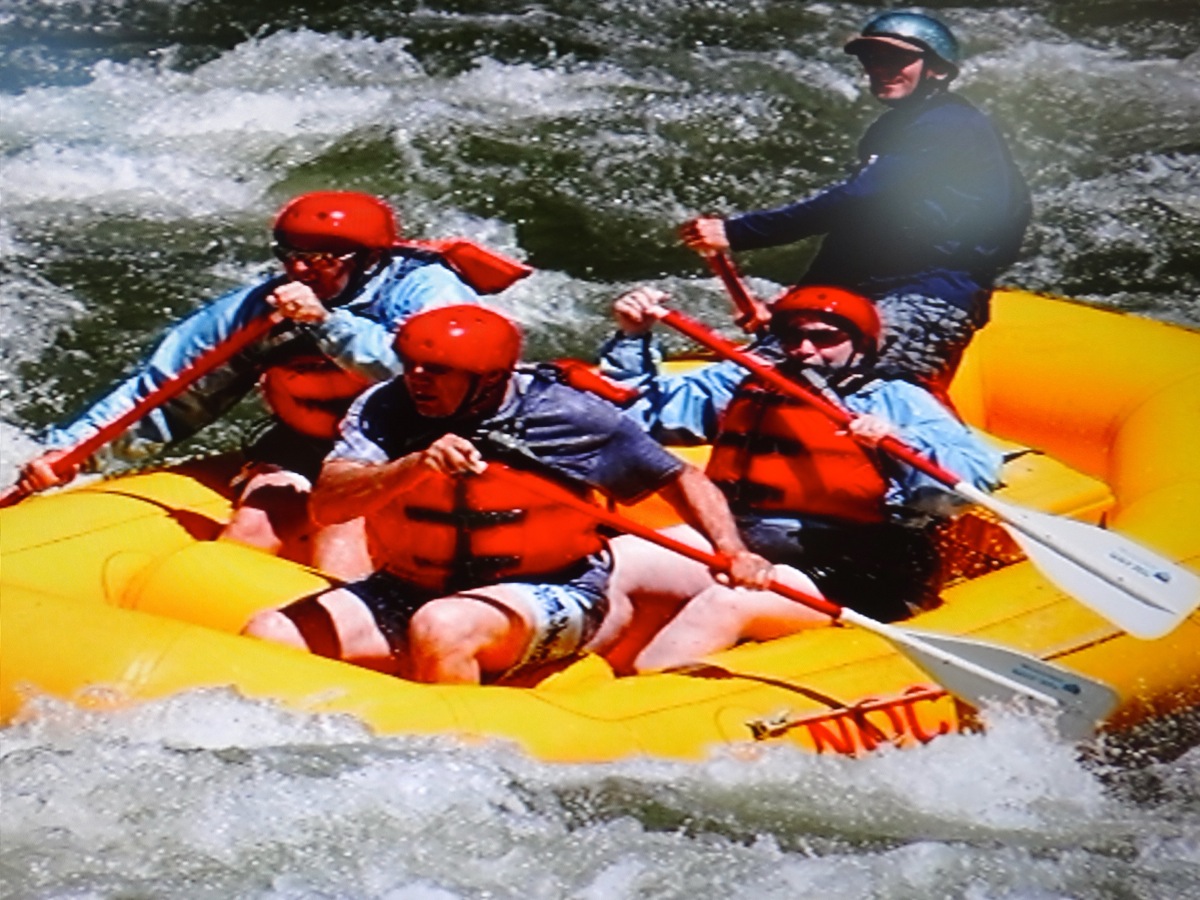 Grade 6: Class 6 rapids are considered to be so dangerous that they are effectively unnavigable on a reliably safe basis.

Start off with signing the all important waiver document; followed by a safety briefing, that’s enough to put anyone off; issue life jacket (well they can’t call them that because the lawyers say it implies that they will save your life), helmet, paddle and splash jacket for those that are nesh. 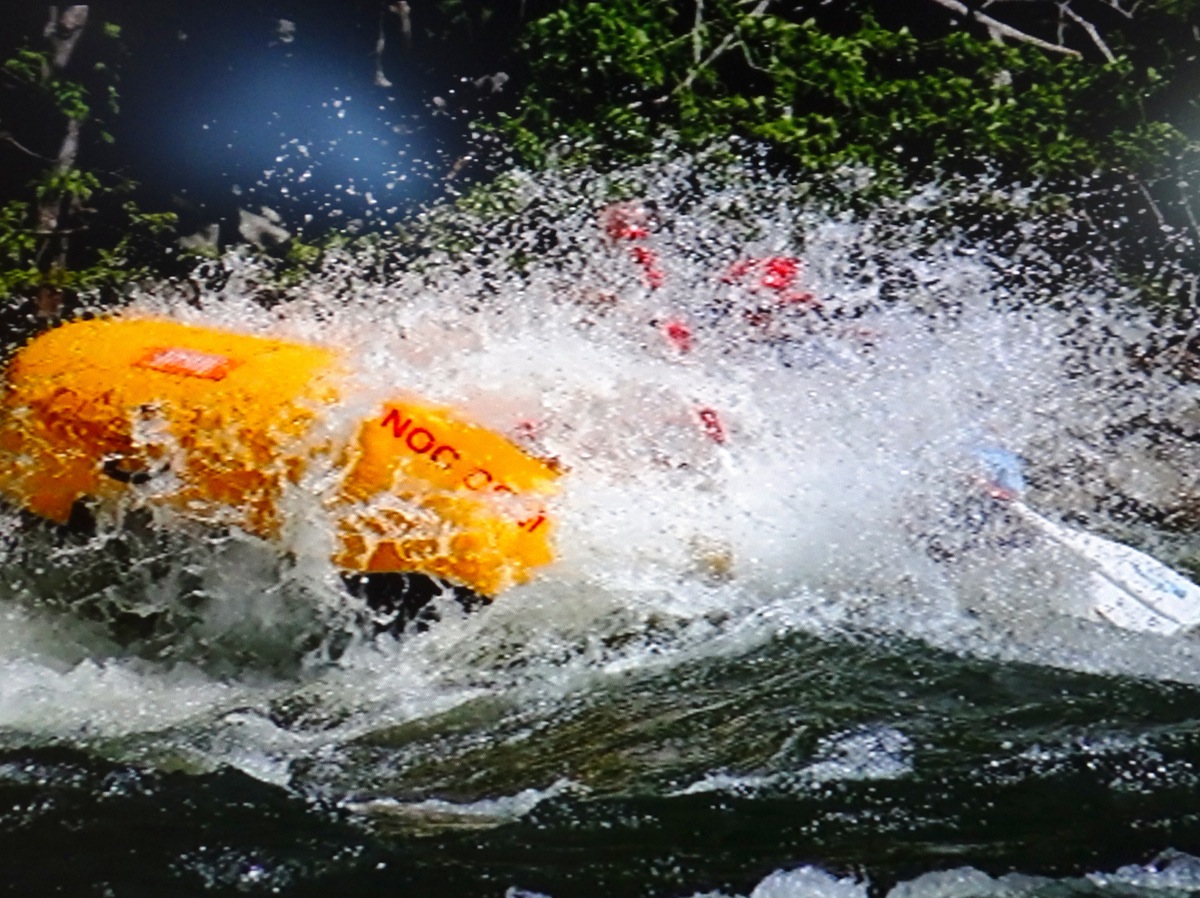 Then it’s all aboard a typical school bus to the launch site. Wendy comes on the bus to take pictures as we raft down.

It was a thrilling raft ride. After listening to the safety briefing and how to ride down on your back if you fall in I make sure the laws of physics will keep me on board. My feet are well wedged in and under the seat in front. Certainly not strenuous but you do get very, very wet and the waters dam cold this time of year.

My rafts got an American couple in it as well as our guide. They rabbit on incessantly, asking the most inane questions. Is that a rock? Is that a tree trunk? Is the water cold? They’d already been told the water was wet so at least that saved a question.

A great experience and worth the money. I think it would be even greater to do it in a kayak – perhaps next time. 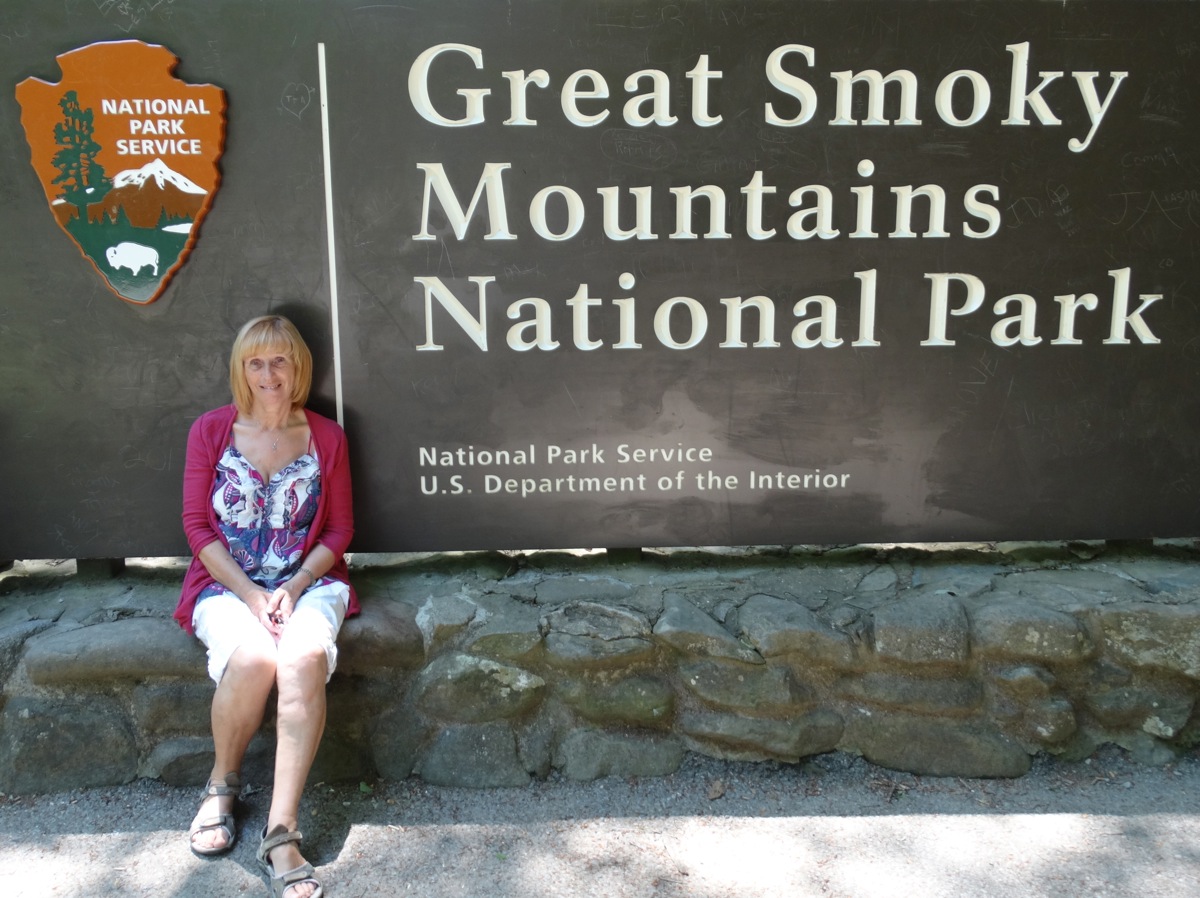 Of course at the end there’s a merchandising opportunity and the all important photo’s. But I have to say they’re not greedy price wise. You can see them on the screen and get about 20 good photos on a CD for you to do with as you wish – no stupid copy right.

Drive back through the foothills of the Smokies. Very lush and pretty.

One small step on the way to World domination by the religion of peace:

Nigerian President Goodluck Jonathan has declared a state of emergency in three north-eastern states of Nigeria after muslim extremists took control of a number of villages and towns. 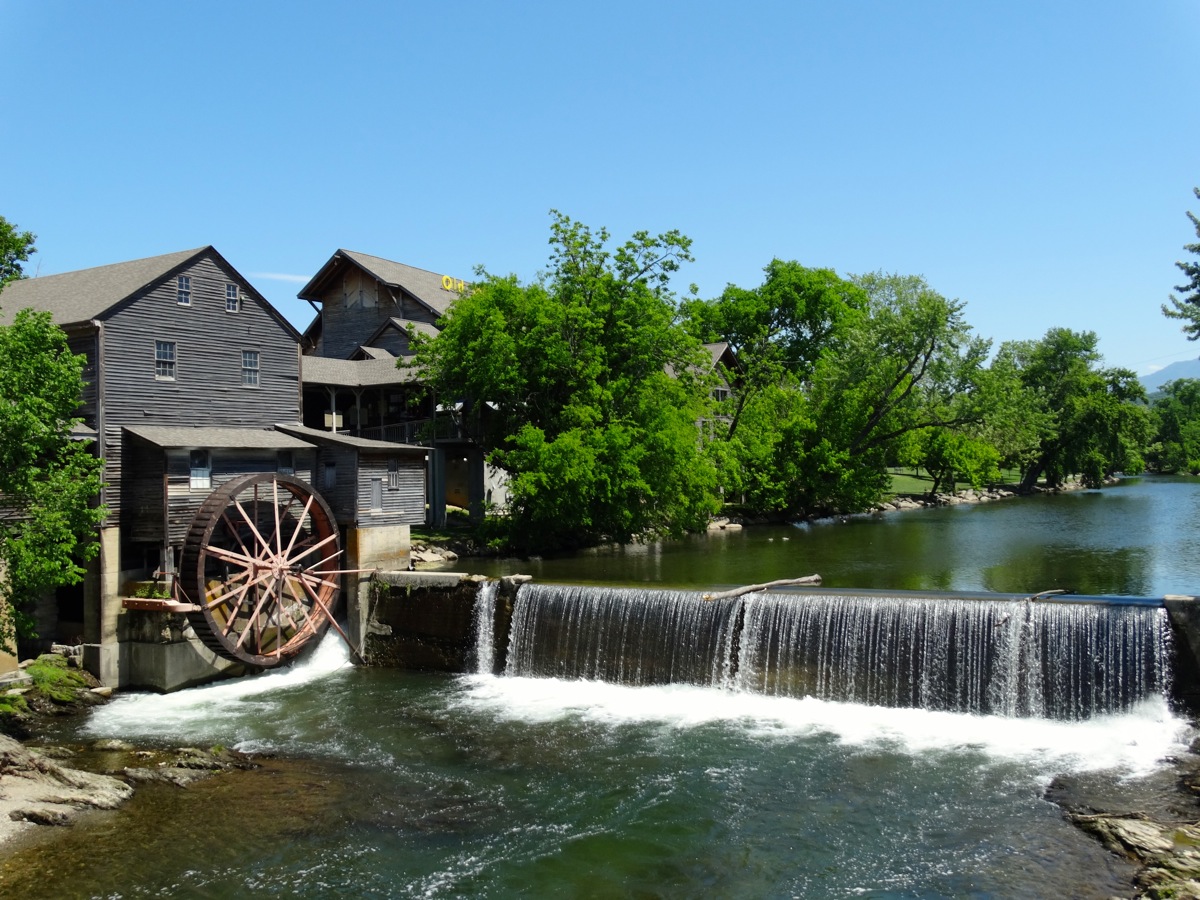 Army troops have been ordered to the affected states of Adamawa, Borno and Yobe, while politicians have been told to remain at their posts.

Islamic extremist group Boko Haram is said to be behind most of the attacks that have killed close to 3,000 people in the last few years. Boko Haram has openly declared that its mission is to drive out all Christians from the North and make Nigeria an Islamic state.

Another place to avoid.

Lazy day before we set off on our road trip. Drive down to Pigeon Forge to visit a quilt shop and stroll around the Old Mill Shopping area. Fortunately there’s someone throwing pots so at least it’s not too bad.

Sat in rocking chairs having a coffee and people watching. It’s such a lovely day. Why is it that bigger is better. 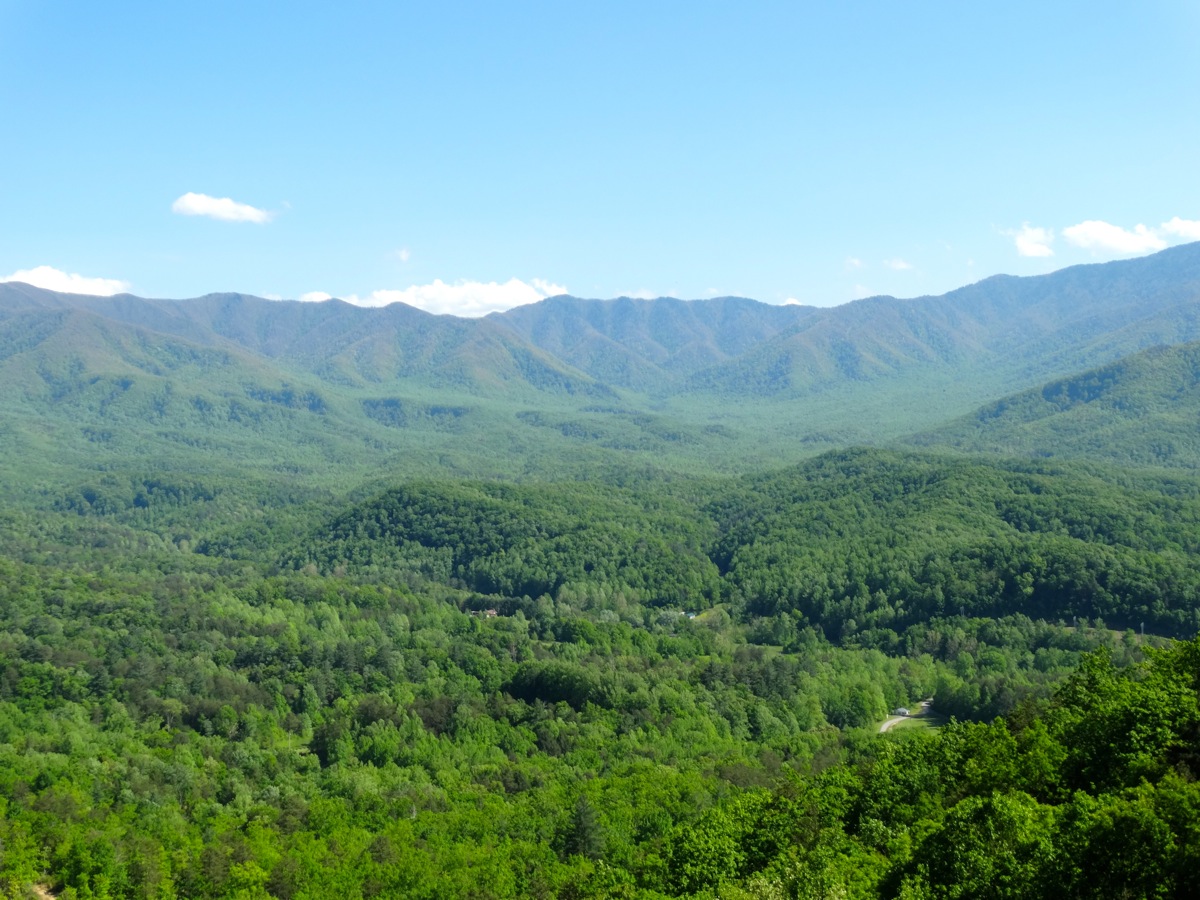 Bigger cars; bigger portions; bigger ice creams; bigger yogurts, almost bucket sized must be 10 times the size of a standard UK yogurt; bigger drinks, why would anyone want 2 pints of coffee or coke. End result is bigger people. Bit of people watching reveals some terrifying ad hoc statistics. Of a sample of people observed, 23 were obese and only 4 were what you could describe as normal, there was only 1 svelte geezer. Mind you that would imply that obese is the new norm – enough to put you off eating for life. This really is the blobby capital of America. Mind you there aren’t many bloodies on the trails. Another useless fact is that in the two weeks we have been here I have only noticed 2 blacks and 3 Muslims. Why is that I wonder?

The other thing I find cloyingly obsessive around here is the constant religious references. Every where you look; in all the shops; on notices they’re quoting the Lord or Jesus. 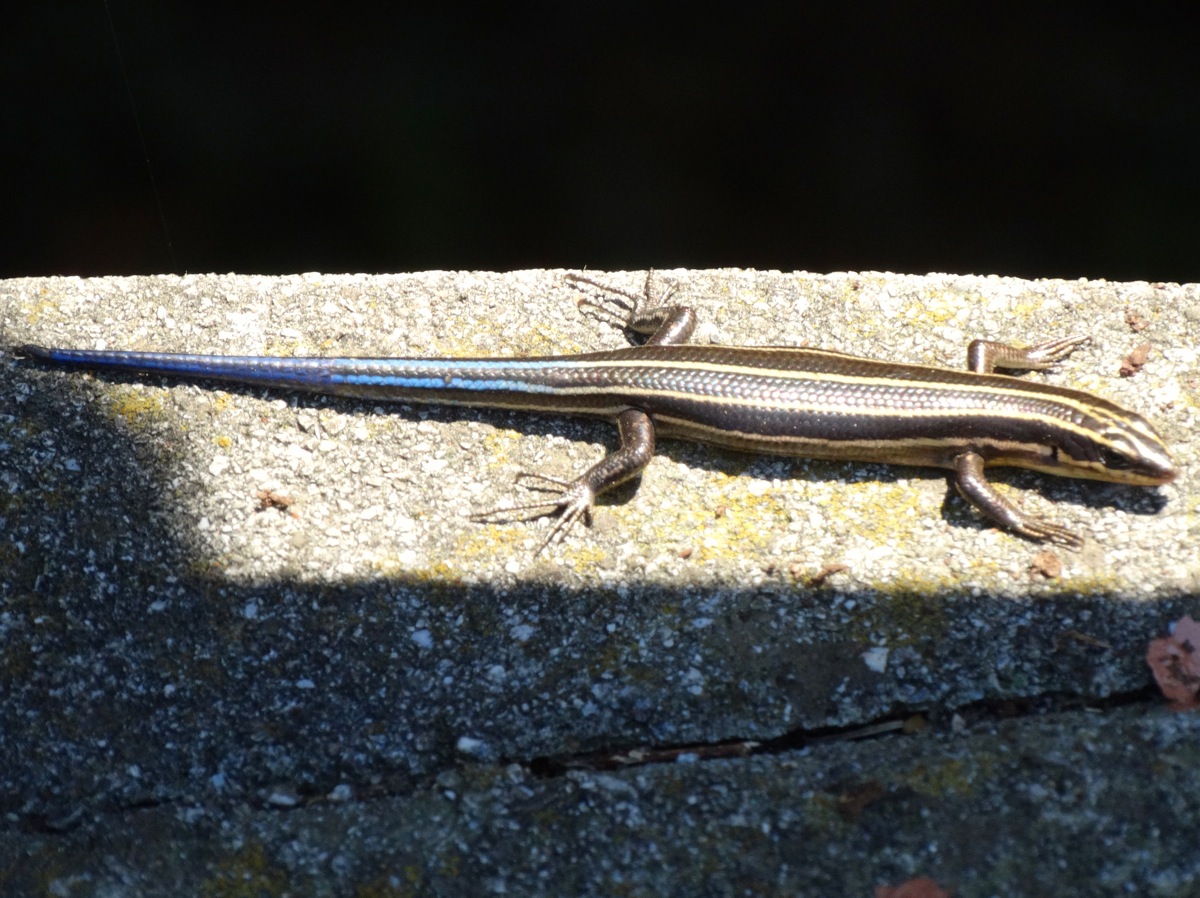 Then we encounter more lunacy whereby you can drink wine and beers inside a restaurant but not on their enclosed patio. Never mind we’re heading away from the Bible belt and hopefully towards some sanity.

And I thought the blue laws on alcohol here in the Bible belt were extreme:

With alcohol forbidden by Islam, Baghdad liquor stores are an attractive target for fundamentalist groups, made more so because they are often staffed by religious minorities.

I wonder what religion the gunman were?

Well tomorrow we leave. Hill Billy country has been interesting and we’ve really enjoyed it, although we have to 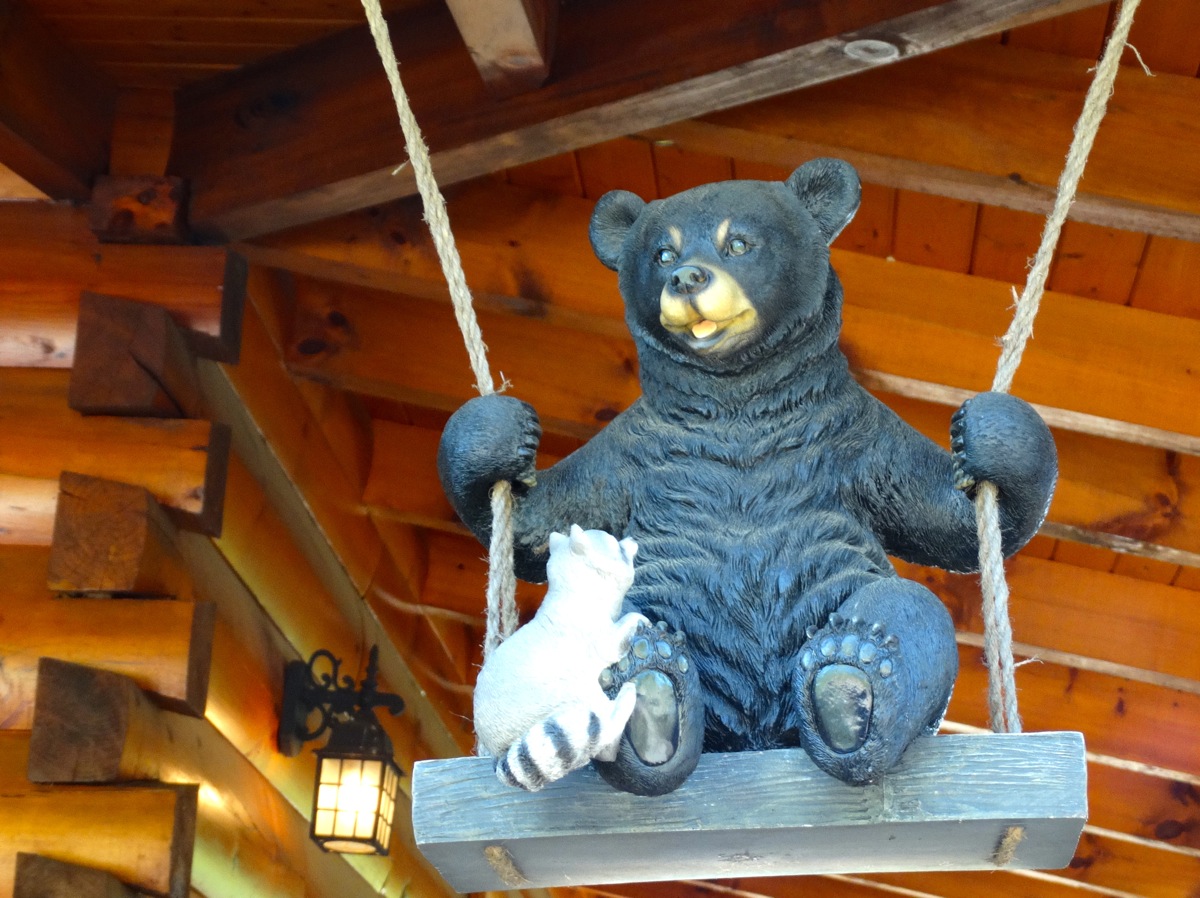 say that of all the places we’ve been in America, especially considering the tourism around here, we did not find the locals that friendly. A lot of the people we have encountered certainly seem to be “slow bouncers”. We’ll miss the Smokies, they are awesome. But as for Pigeon Forge and Gatlinburg, we’ll be glad to not have to drive through them again. To put it into perspective, imagine having to drive down the golden mile at Blackpool just before you enter the Lake District National Park.

Alas we’ve not really seen any Black Bears and certainly not been fortunate enough to see any on our deck like some people, but Wendy’s taken a picture to make up for it. Mind you we did manage to get a picture of the friendly lizard that Wendy terrified the other night.