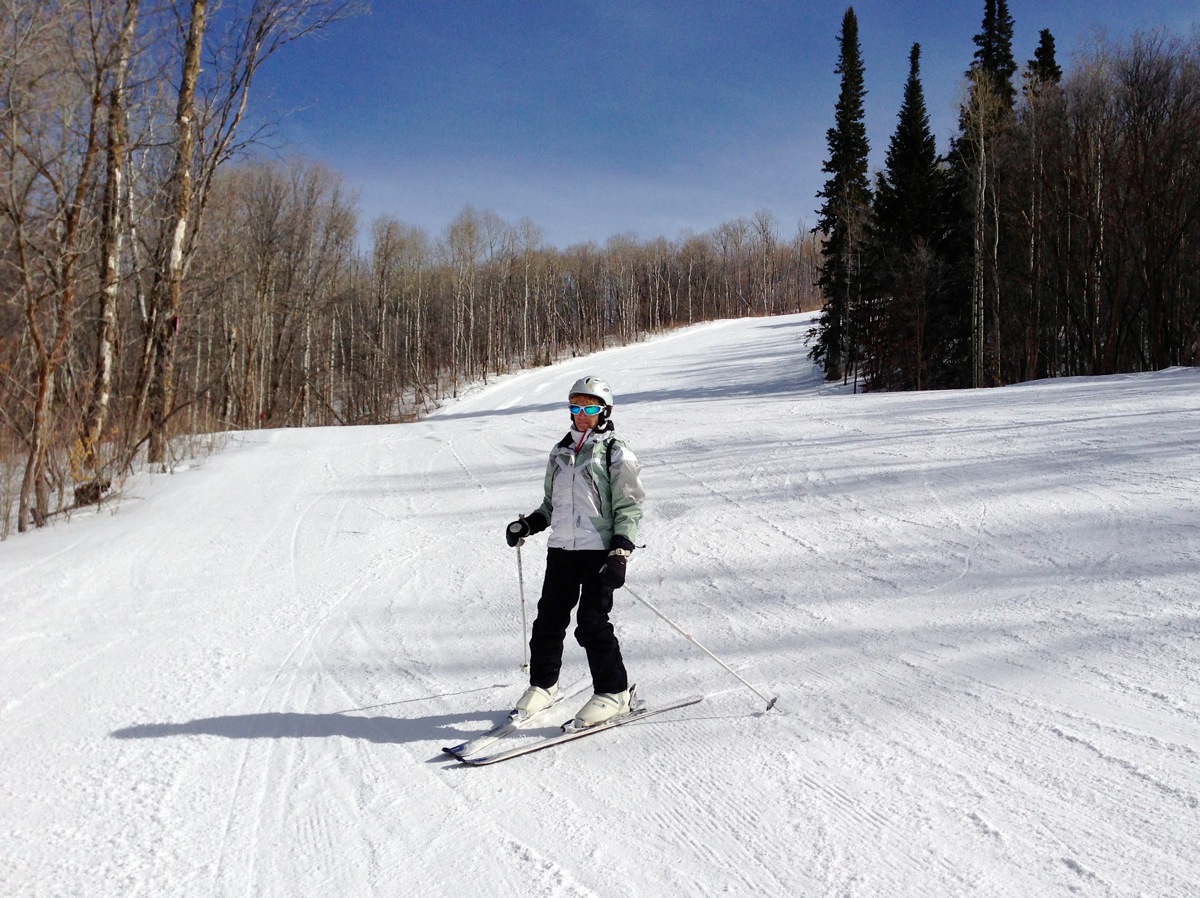 A couple of easy runs and then Wendy thinks it’s time for coffee.

A coffee and internet stop in my mountain office, sat by the log fire.

Then a few blue runs and finally ski down silver star to the silver star restaurant where we have lunch. Well to be honest Wendy has lunch. I commit a sin and have a Stiegl Austrian pilsener for lunch. I’m sure I’ll be forgiven. It brings back happy memories of skiing in Serfaus in Austria.

After lunch we catch the lift backup and it’s then one final rundown for Wendy, her poor little legs are so tired they’re like jelly by the end of the afternoon.

Why is it that my feet always hurt when I ski with Wendy. When she’s not there I ski really hard and non-stop, yet my feet never hurt.

A good days skiing and beautiful weather. Five hours later we get back home.

For those of you who’ve been skiing you’ll probably be aware that the trees are sometimes adorned and decorated with bras and knickers. This seems a perverse behaviour probably carried out by snow borders. Why anyone should want to ruin the looks of these beautiful trees god only knows, but there we are. Anyway I’ve come up with a new game, I’m sure the 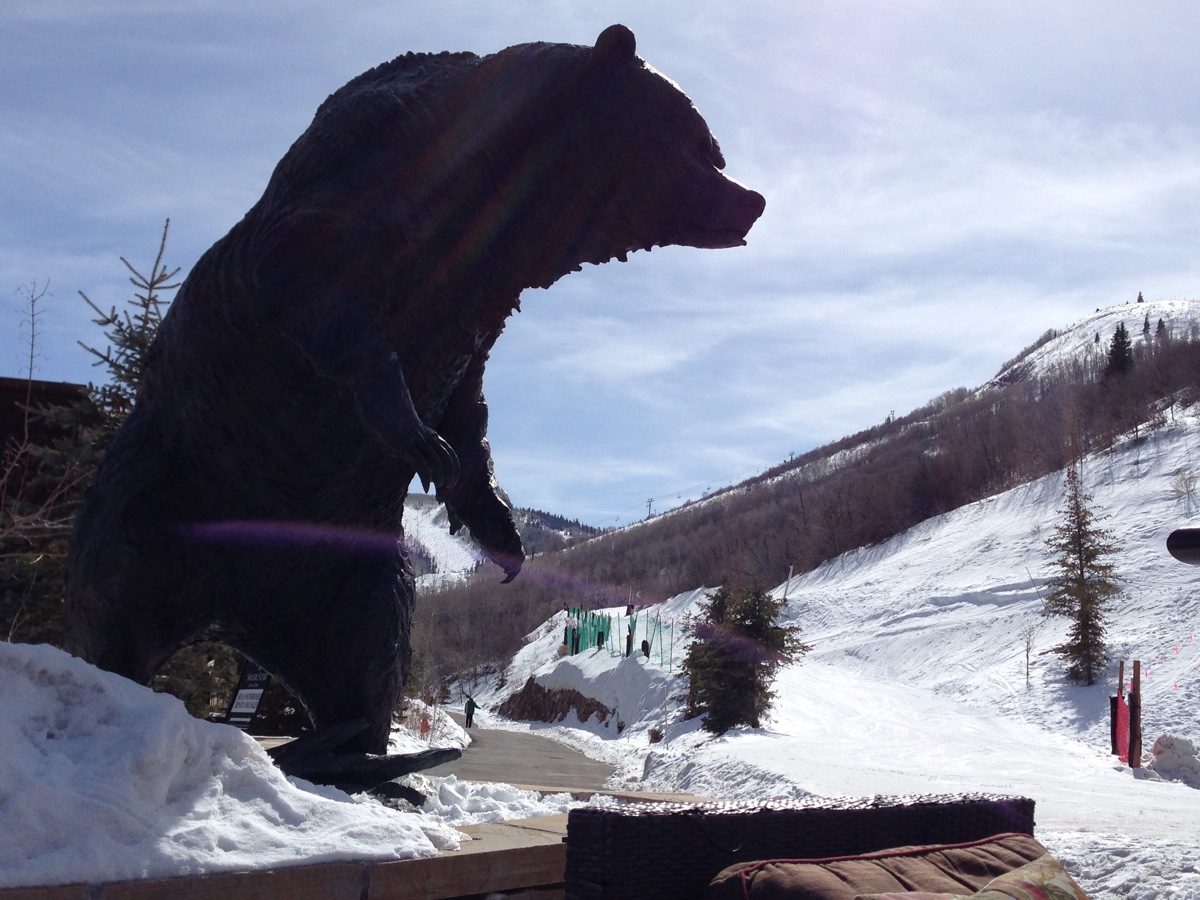 lift companies could promote. As you travel up on the lift you need to guess the sizes of each of the bras on the trees. Should you get all right then you get a free day pass.

Meanwhile we both decided we miss having a dog but with our lifestyle it’s just not possible. Unless of course someone develops a small breed that can be just popped in the freezer while you’re away and defrosted as soon as you get back.

Up to 15 Al-Shabaab fighters were killed when a vehicle laden with explosives went off in a house in Buloburte town, some 200 km north of the capital Mogadishu.

It was not clear if the militants died while packing the car with bombs for a suicide mission or if it went off afterwards while they were in the vicinity.

Perhaps there is an allah after all – that’s me on the Worldwide “To Be Stoned” list.

Wednesday (well at least we think it is, but them buggers at the BBC have put East Enders on tonight so we’re confused) – warm and sunny.

Now for some crazy British laws: 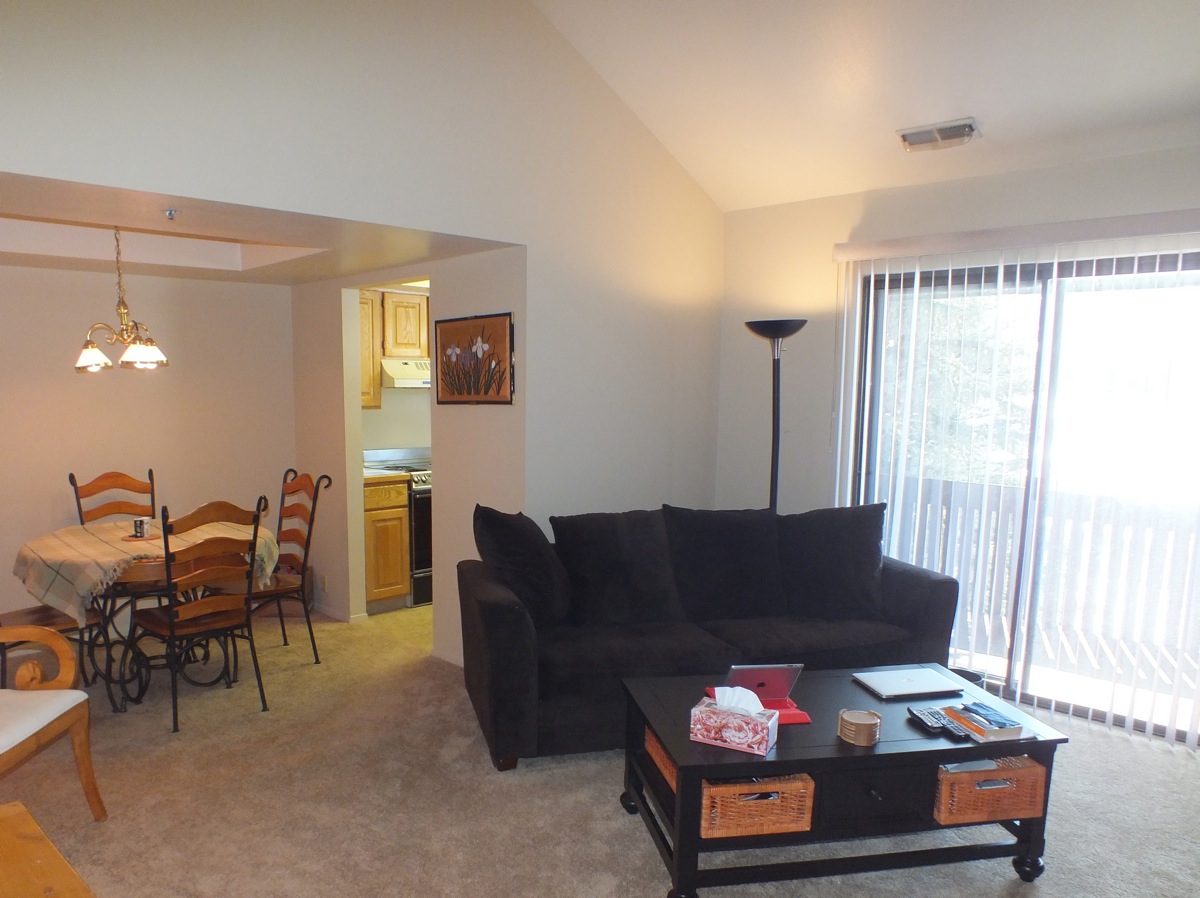 It is illegal to die in the Houses of Parliament.
It is an act of treason to place a postage stamp bearing the British monarch upside-down.
In Liverpool, it is illegal for a woman to be topless except as a clerk in a tropical fish store.
Mince pies cannot be eaten on Christmas Day.
In Scotland, if someone knocks on your door and requires the use of your toilet, you must let them enter.

Time to put some photos of our home from home on. It’s a lovely condo. Another great house swap.

Meet up with Carol for a mornings skiing. She gently pushes me to try some of the groomed blacks – no it’s not a racist remark. I’m a blue cruiser. If I can’t do it with style then I don’t do it. Black Diamond runs tend to ruin my style but I really do need to start doing a few more. Try Crescent which has been lovingly groomed and is a great run. Then try Detonator, not 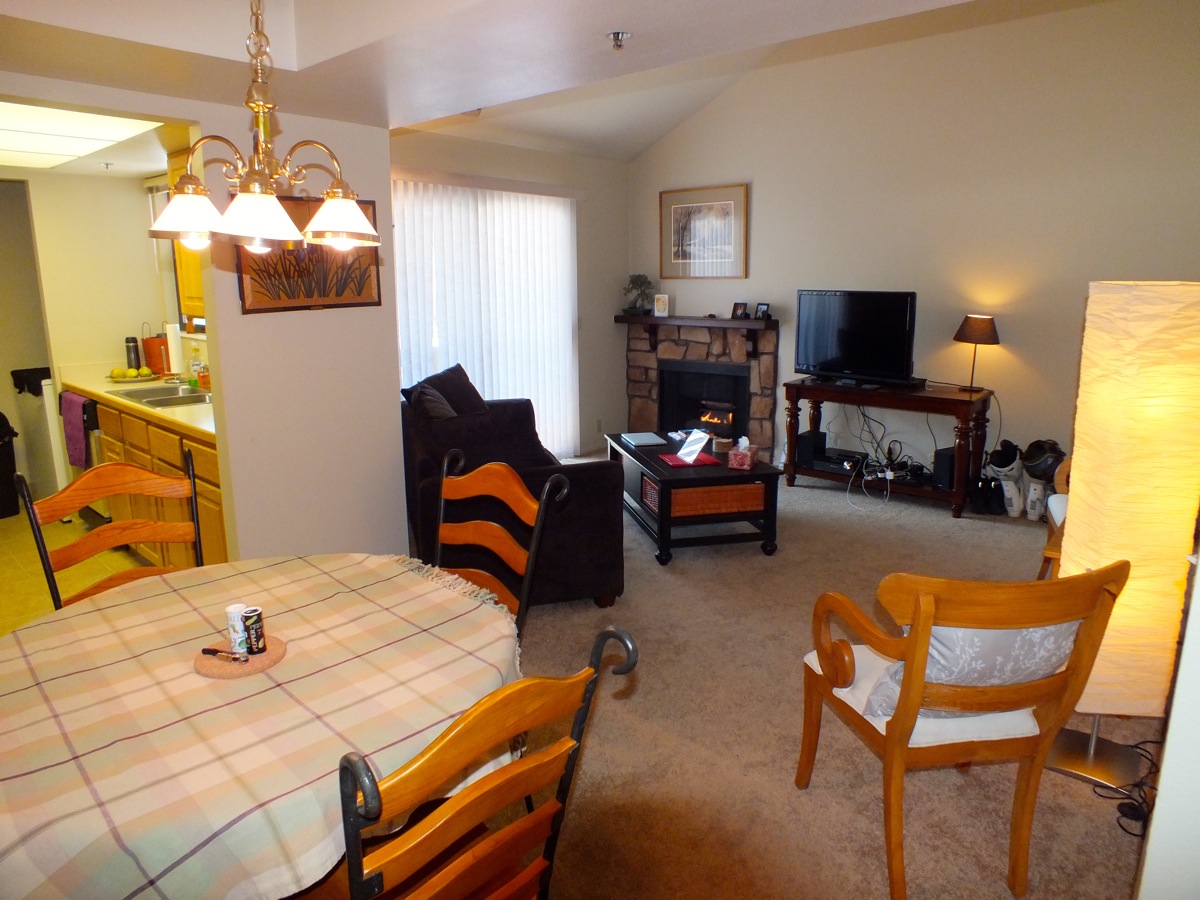 groomed for a few days but not too difficult. After many years visiting here I finally get to do Sunrise which is a double blue. To me it looks worse than a Double Black Diamond. The guy who graded it was either stoned; blind; or worked for the marketing department and didn’t want to have a Black Diamond off this lift. Anyway it’s not been groomed and after the first 200 feet it’s done with style and no stains in the underwear.

A great mornings skiing. Plenty of exercise. Good to be pushed outside my comfort zone.

Afternoon and Wendy gets her treat of the week with a free trip to the supermarket. I manage to get some work done (SQL coding – happy days).

Metsa Tissue were printing trivially entertaining messages about love on their loo roll to please their patrons, but included some Bible quotes. One such quote read:

“For where your treasure is, there your heart will be also.”

Guess what? someone objected. The Bishop of Tunsberg, Norway said “This is bad taste and shows a lack of respect…Bible verses do not belong on a roll of toilet paper.”

The company has now decided to stop printing the religious messages and vet their quotes more stringently in future. 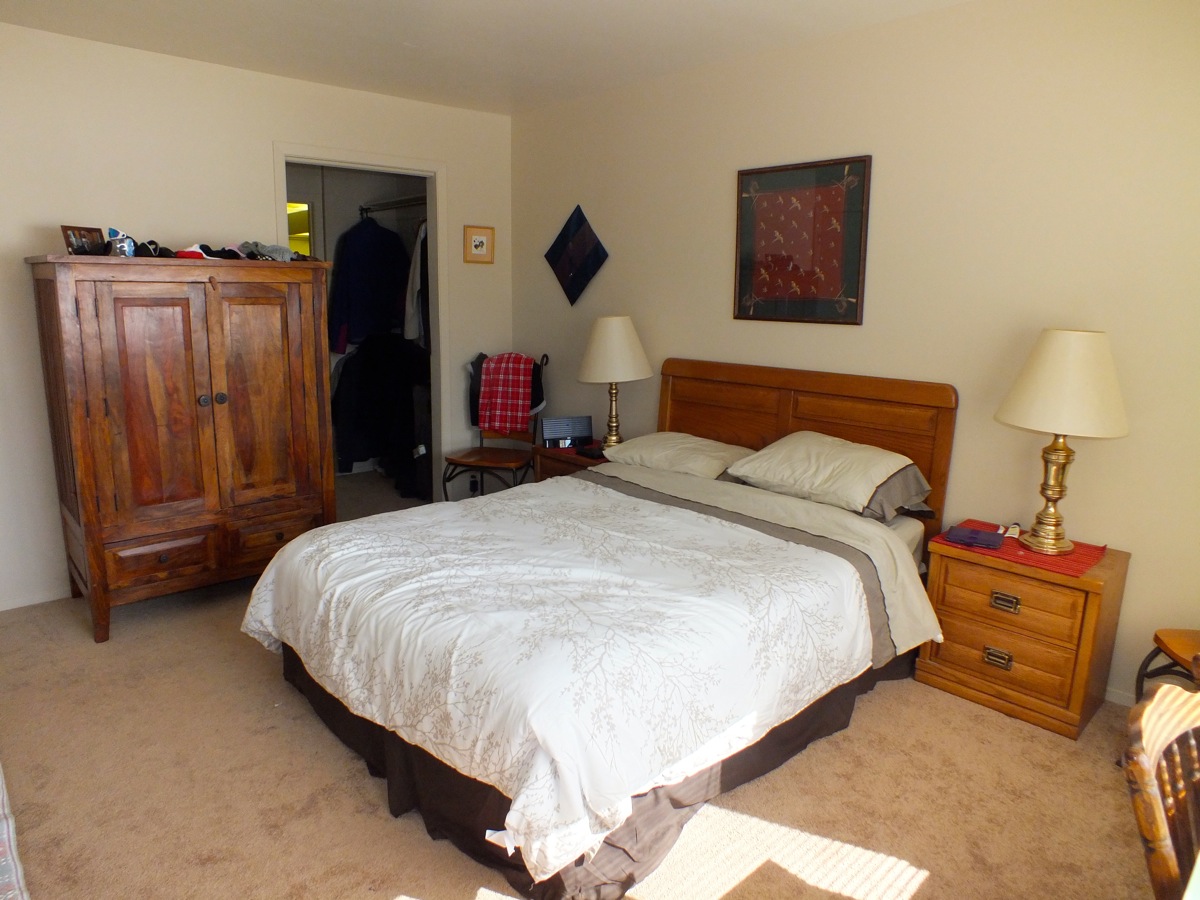 Good job they weren’t quotes from the Koran.

A pregnant woman can legally relieve herself anywhere she wants, including in a policeman’s helmet.
The head of any dead whale found on the British coast automatically becomes the property of the king, and the tail of the queen.
It is illegal to avoid telling the tax man anything you do not want him to know, but legal not to tell him information you do not mind him knowing.
It is illegal to enter the Houses of Parliament in a suit of armour.
In the city of York it is legal to murder a Scotsman within the ancient city walls, but only if he is carrying a bow and arrow. 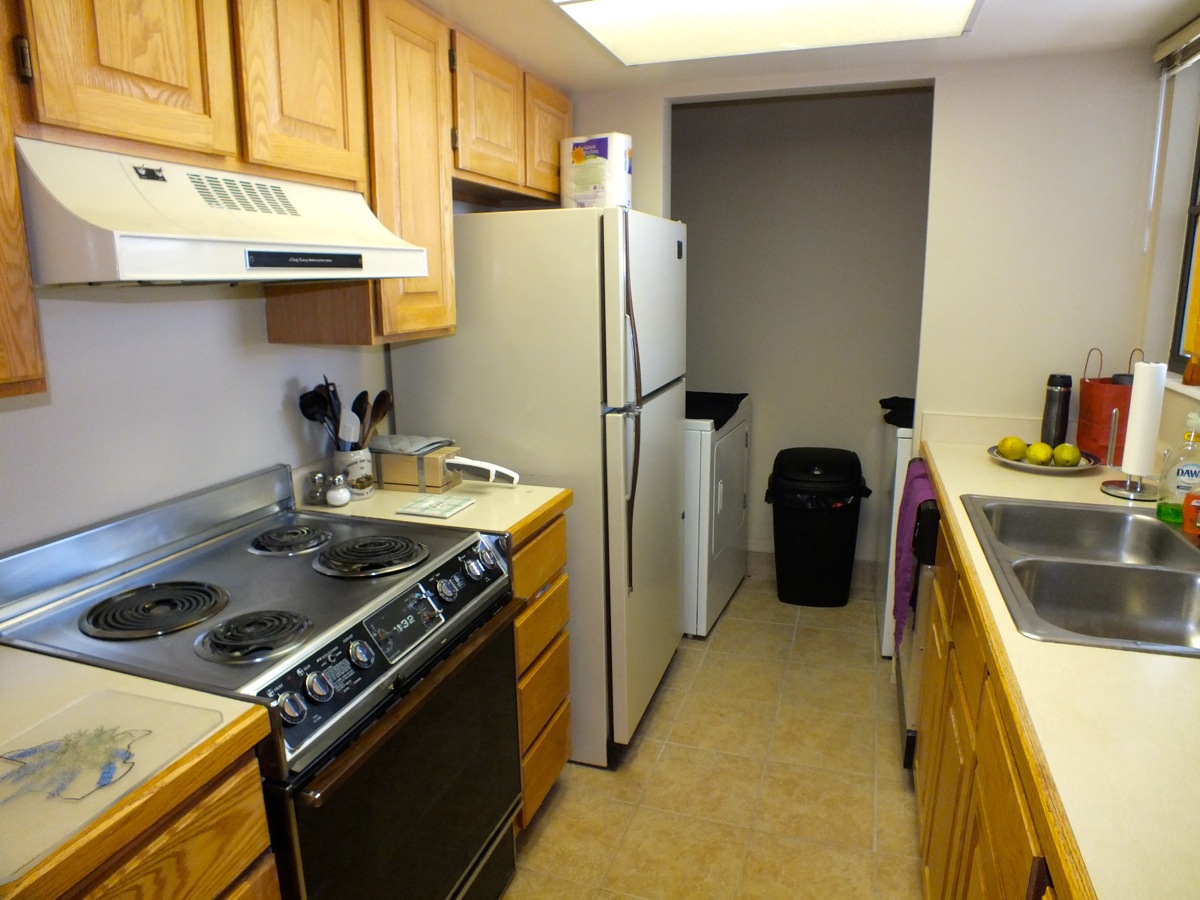 Eagle lifts still broken and it’s 39F so the snows already melting and it’s a whiteout on the top runs, time to hug some trees. We got 1 – 2″ of snow last night so it’s not too bad on some of the runs. As part of my new found push to do  Double Blacks, at least if they’ve been groomed, I was aiming to do First Temptation – a Black Diamond mogul field from hell, that would certainly stain the underwear. But with the whiteout I can hardly stay upright when I’m stood still so I give it a miss. Have a hard pushed hour on the lower slopes, below the whiteout and then skive off for a coffee in the hope that the whiteout / cloud will lift.

Get back to the condo and there’s this new bird clicking away with knitting needles. Do my eyes deceive me. Gone is the dizzy blond look and hello to the trendy new look – see picture. I like it. Wendy’s not so sure. Will it make her ski faster? 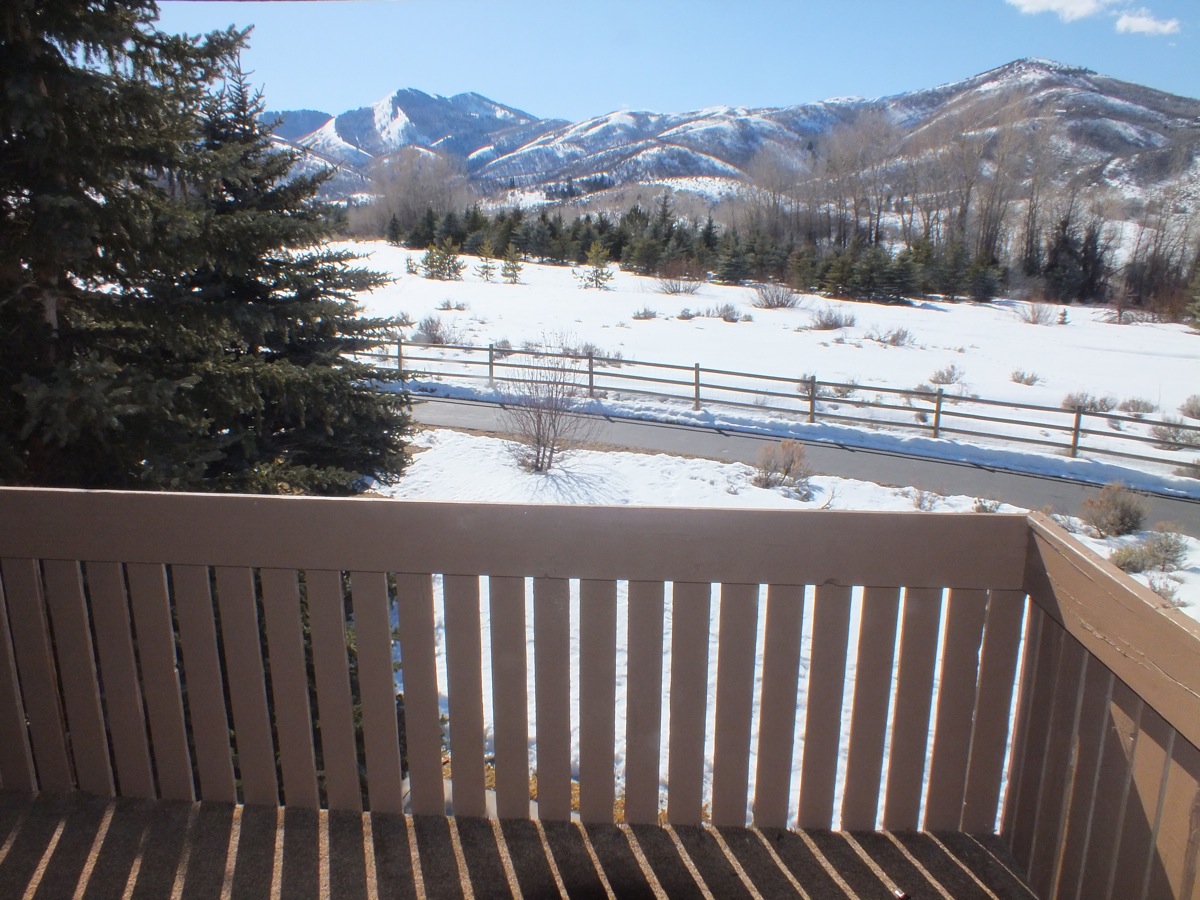 Afternoon spent swearing at the financial web sites and their password hell, as I try and assess how poor we are and what to do about this years ISA’s. I always hate these “days of reckoning”, they are guaranteed to drive me nuts. Wendy passively sits there clicking away and wishing I was skiing instead of swearing at the dammed web sites. I wish I was too.

It seems that America has it’s own clowns throwing money away. We are not alone. Heres a story from a realtor (estate agent):

After I woke up the homeowner, she let us in and then pro-ceeded to tell my buyers and I that she has already entered into a contract to sell the home on a short-sale. (A short-sale is a sale where the banks accepts less money than is owed on the home). She and her sister (who also lived in the area) were buying each other’s homes via the short-sale process. I mentioned to her that I thought relatives could not be involved in those transactions. She smiled and said “We have two different last names so no one knows the difference”. 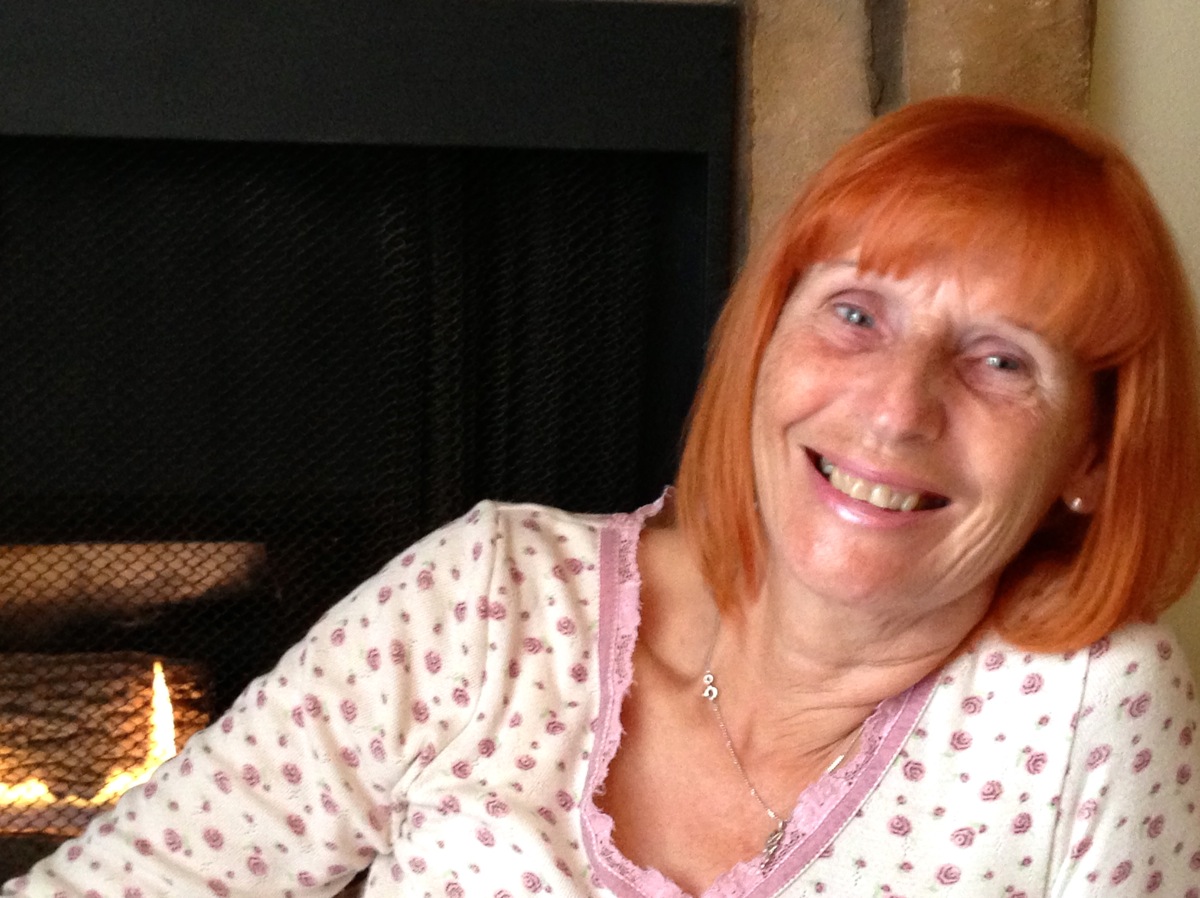 government provided relocation assistance at the closing. My buyers and I were amazed that she was outright admitting to fraud and yet, she continued. She began to tell us that the best part of her scheme was that because they currently were not working that they (both) are now receiving Section 8 Vouchers. I said I thought those were for renters and she said “That’s the best part; me and my sister are going to be renting each other’s homes so we don’t even have to move, and Obama is going to give us each $800.00 a month to pay the rent!”.

These women went from working and paying about $900.00 each in mortgage payments to staying home and getting paid $800.00 each per month to live in the same home they had been living in and all they had to do was lie on a few papers. This craziness has to stop! I’m sure this kind of fraud is going on each and every day all across the country and no one wants to touch the subject of entitlements because they might OFFEND someone or lose a vote or two. 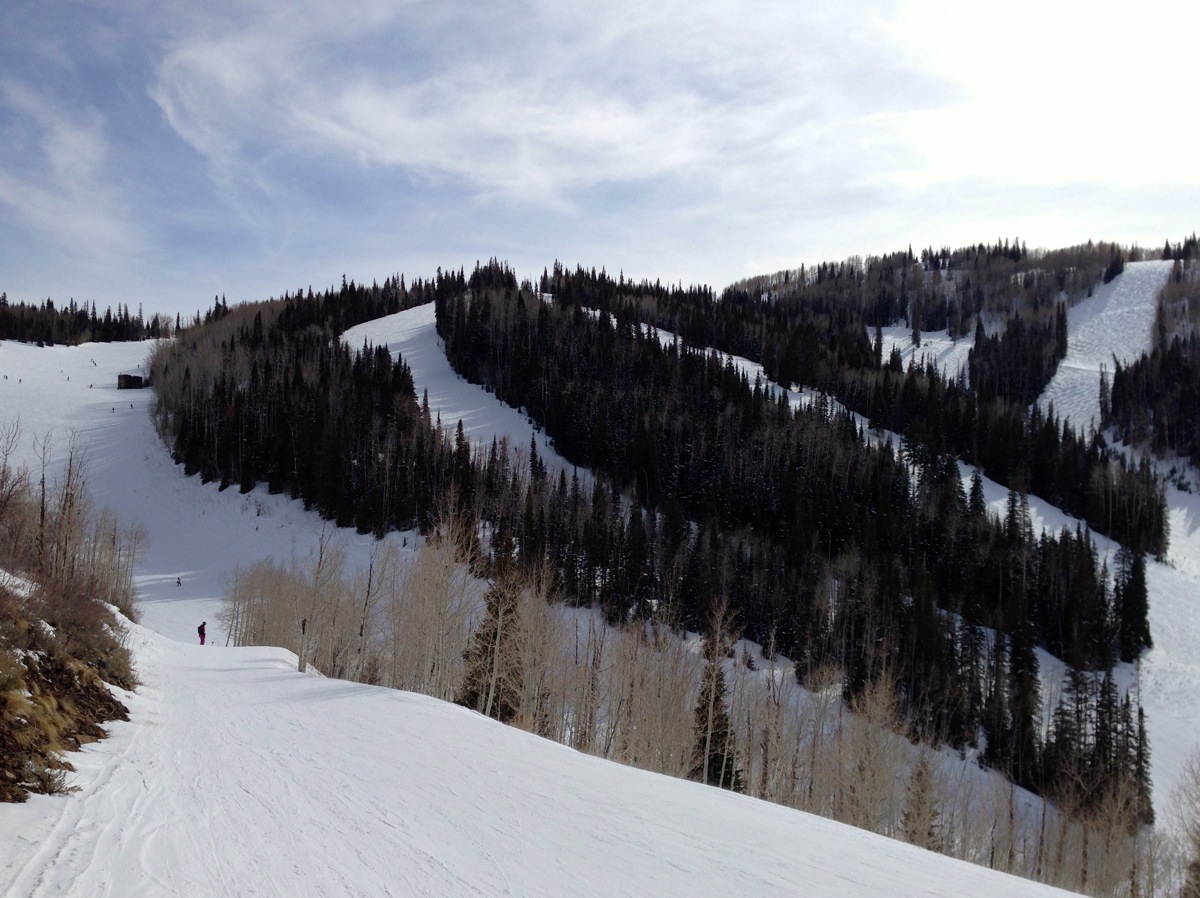 By the way… she had an almost new SUV in the driveway, three flat screen TV’s and a very nice computer set up in her living room which was furnished entirely with nice leather furniture.

Then to top the “IT day of crap” this bloody blog software has just lost all my work, even though I had a draft copy.

Here in the land of the free and the home of the brave where guns massacre innocent kids; have over 10,000 gun deaths per annum; have even more gun accidents, the politicians are still waffling on with more hot air. The gun lobby are still in their with all their cranky arguments. The senseless killing goes on daily and surprise, surprise nothing gets done.

But what I’m about to reveal is just totally unbelievable. It’s a true “I don’t believe it moment”. Here’s a question to unlock this nonsense. 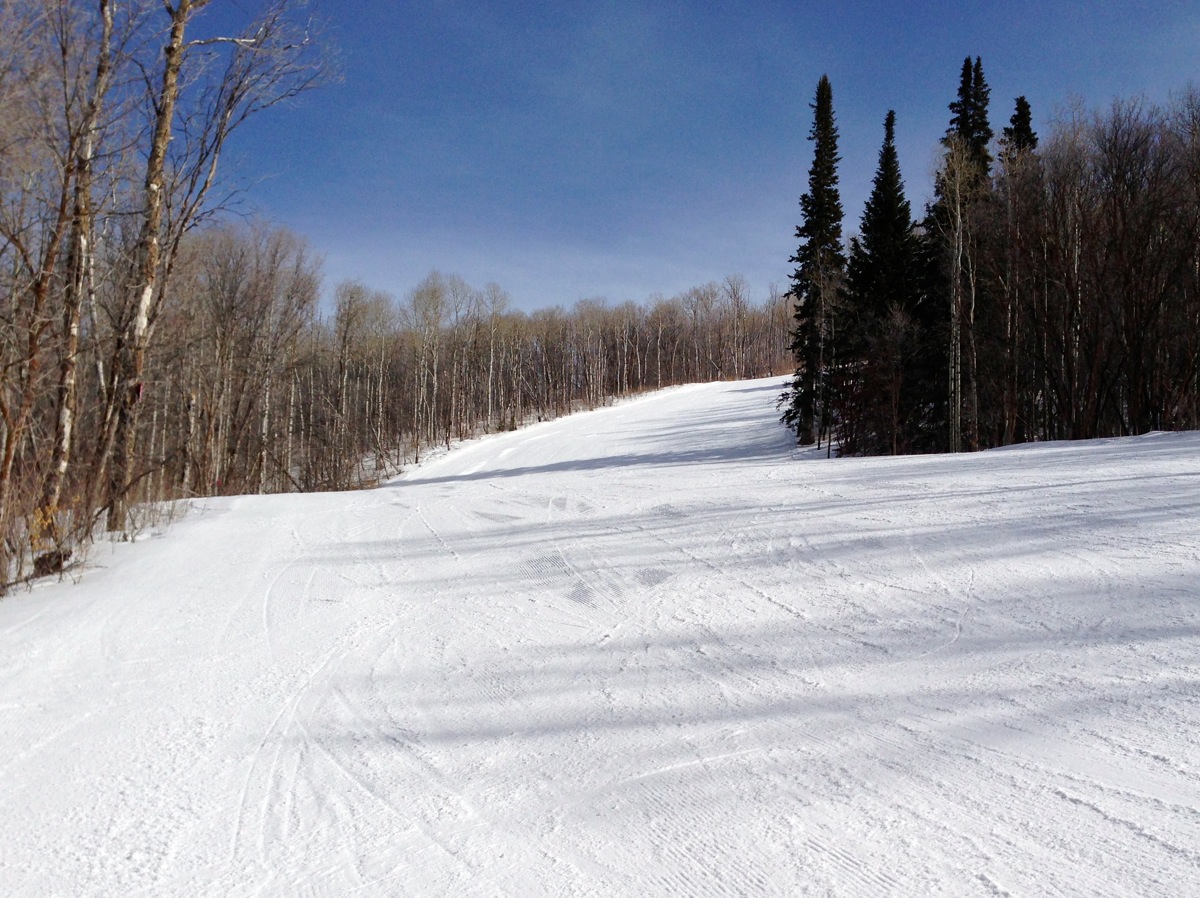 What do the following have in common?

The answer will be in my next blog. Grip your seats and sit tight it is just unbelievable.