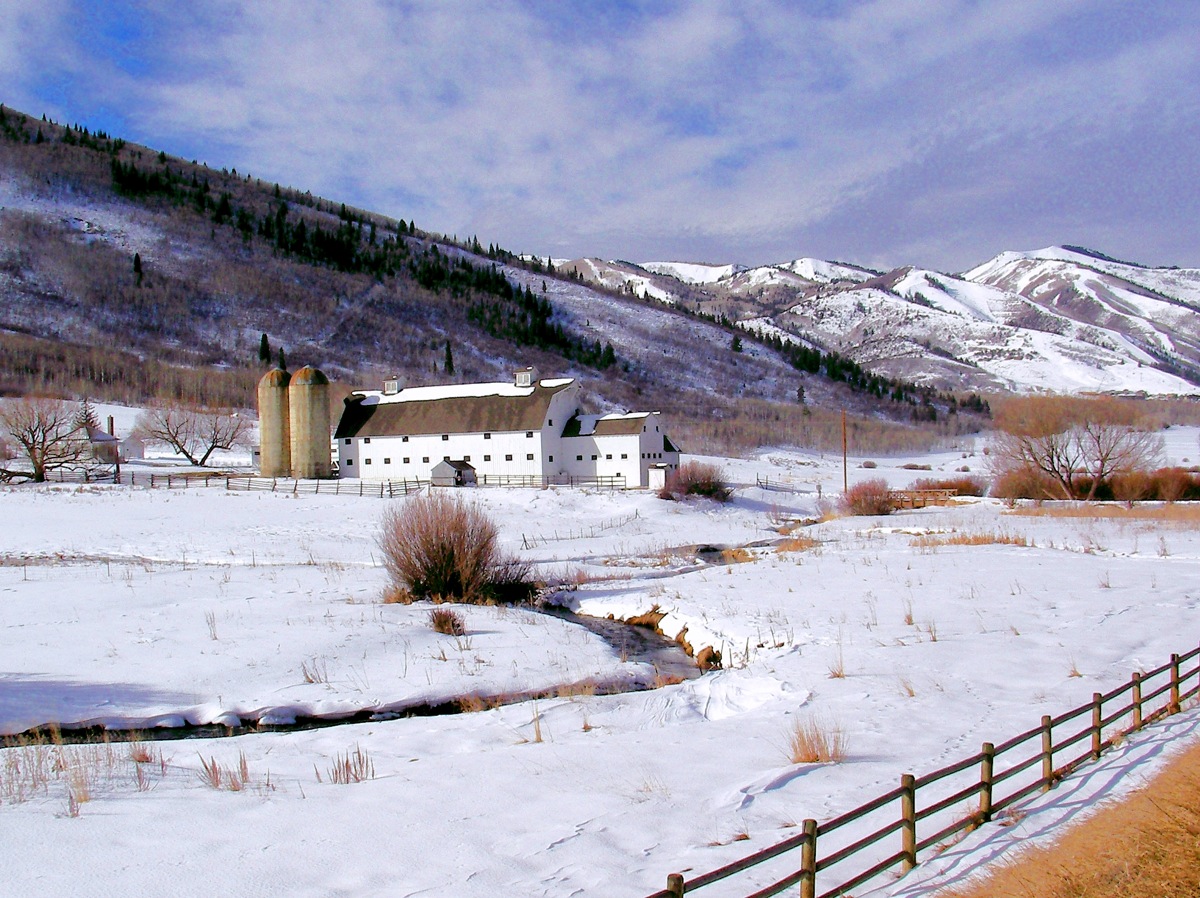 As usual it snowed the day before so we end up coming over to an airport hotel the night before. This seems to be a regular feature of our escapes. Driving down Belthorn road Wednesday afternoon in an SUV with the bakes on and it just wouldn’t stop  – like a toboggan ride. Quite scary, fortunately hit nothing.

Typical! I travel in my thongs to make it simple taking off shoes before I go through the airport sterilising machine and the buggers don’t ask me to remove my shoes!

How to in increase the airport misery? Introduce more queues. Two new queues this time:

One to access the manned self check-in machine to print your ticket. Sadly you then have to queue for bag drop. The two transactions take about the same time as the good old one check in, but has the advantage of an extra queue.

Second queue to check that your plastic bag with liquids in is properly sealed (nothing to do with the fact that he’s stood next to the machines selling bags for £1). What difference does it make whether the bag is tightly sealed or not?

If they really cared about my safety why don’t they do the sensible thing and profile. Well we all know why. It’s just not PC – all the more reason to do it. Anything less means they don’t really care!

Flight with Virgin to Las Vegas was very comfortable. New plane, well kitted out and we get bulkhead seats. I complain there’s just too much leg room we have to get up to reach the magazine 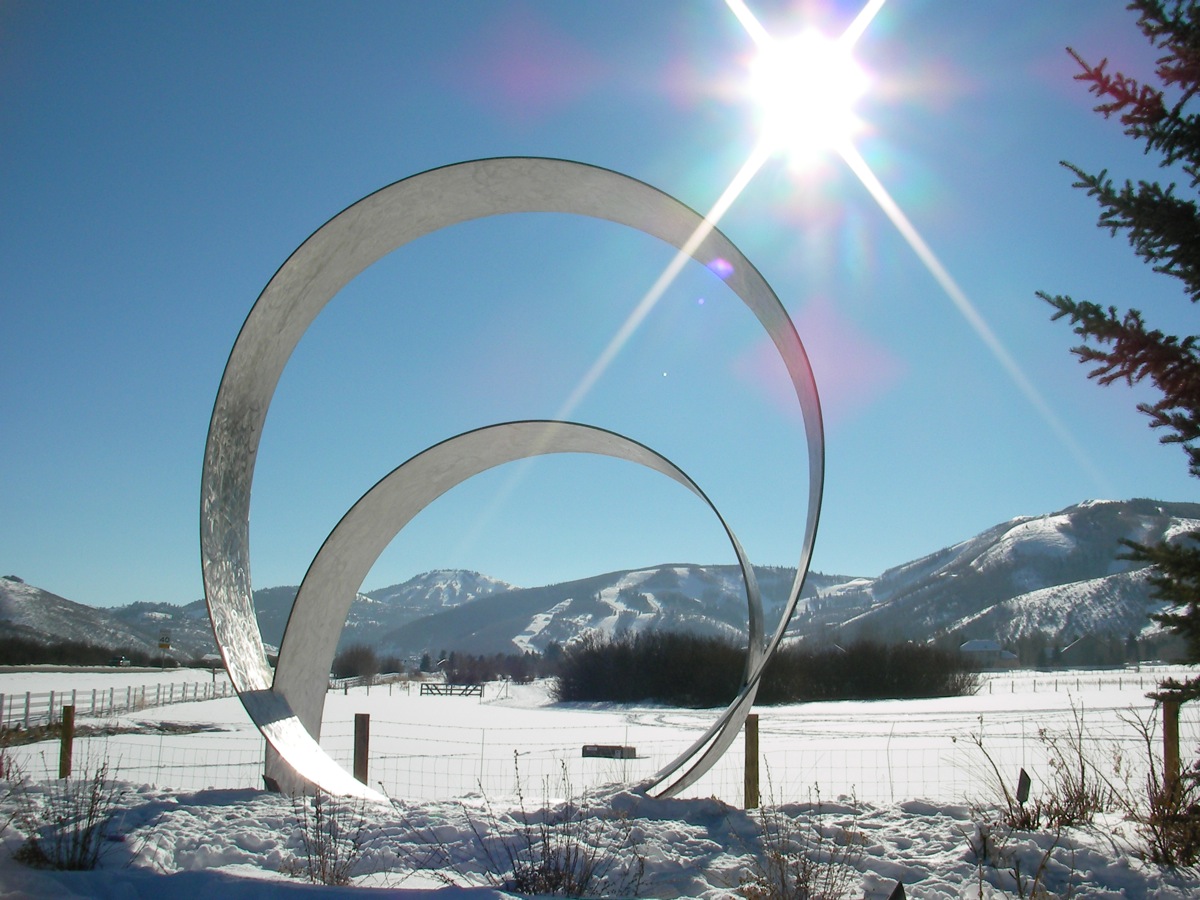 pocket. Wendy’s been complaining to Virgin again (not me), perhaps they’re trying to butter her up.

I’m plodding (I don’t use this term lightly) my way through Richard Dawkins “The Blind Watchmaker” to better understand evolution. Which raises an important, but politically incorrect question. What is the evolutionary advantage for black women tending to have such big, horizontally prominent, arses? Answers kept in the strictest of confidence.

Mr Hertz provides us with a nice SUV upgrade – Chevy Equinox 2LT. Haven’t a clue what LT stands for, never mind why there are two of them. But apparently it has “advanced remote vehicle start” – start your car from in the house!

Hotels in Vegas is comfortable as usual, well at least when we’ve moved from the room with wall that vibrate like a bass speaker. 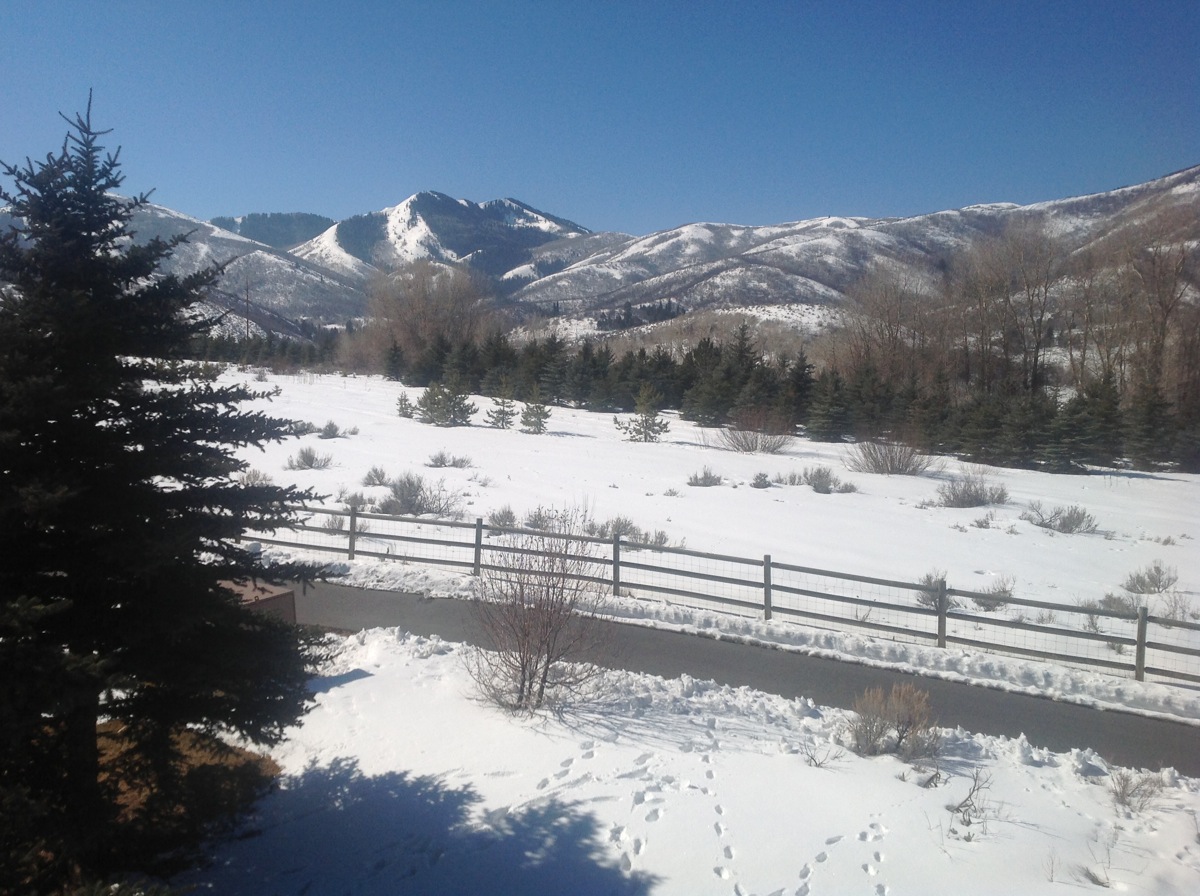 A university graduate has the gaul to claim her back-to-work scheme, that made her stack shelves in return for her benefits (perhaps one could call it “Workfare”), was unlawful. Argued it breached slavery rules. Has the brass neck to take it to court and waste even more taxpayers money. Then to top it all the courts agree with her instead of kicking it out and selling her into slavery to pay the costs.

I’ve no problem with the concept of a welfare state, we never know when we’ll need a helping hand in life, but when will common sense prevail and people who receive benefits be made to do some work in return – WORKFARE. Why can’t our wimpy, hot air politicians just make it happen.

Up at the crack o sparrow’s and on the road to Park City by 07:00. Pleasant drive up. 400 miles and not a traffic jam or serious roadworks in site.

Condo’s very comfy with great views from the balcony. Best of all it has 34 MB wifi – heaven. Picture above on the left is the view from our balcony.

Then it’s a trip to the supermarket for the important things like coffee and wine. 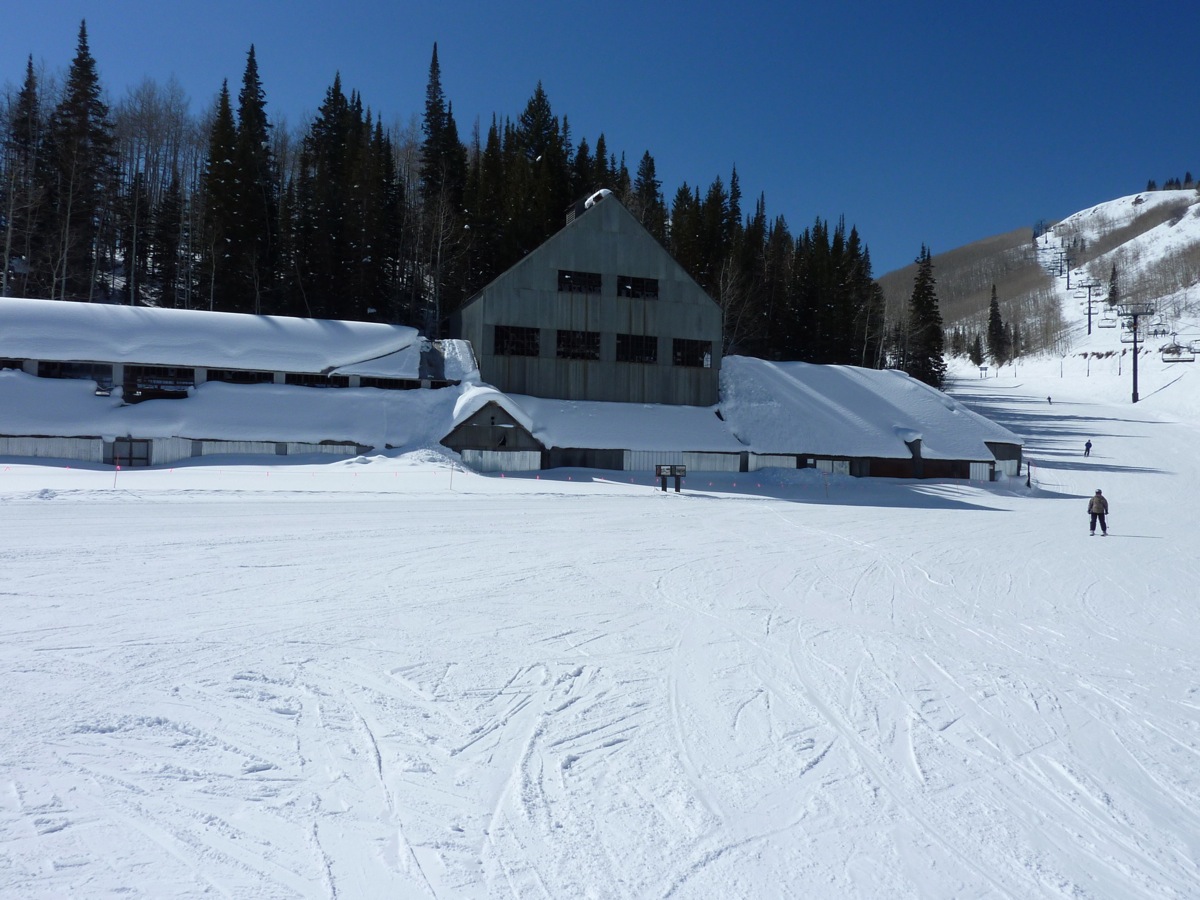 Nip round to Carols to pick up my skies and gear. Then it’s off to Park City ski resort to buy me season pass and hit the slopes. Costs $850 but works out at less than $30 a day, as opposed to $102 a day at the window.

Despite a late start, get in a good 4 hours skiing and manage to avoid queues and busy runs. This is what it’s all about. Great mountain, great snow and great skiing. I’m at home here. I think the stork must have dropped me off at the wrong place

Free wifi now on the mountain, 7 MB per second. Yes 7 MB and free on top of a mountain. BT struggle to provide 2 MB at home. You can say what you like about America, but apart from their childish and somewhat macho / phallic obsession with guns, it’s civilised.

“Life, liberty and the pursuit of happiness” is the founding statement in the declaration American declaration of Independence. But isn’t there now sufficient evidence to show that the 2nd Amendment’s “right to bear arms” actually infringes this by robbing so many Americans of their lives.

I think there’s some fundamental questions all Americans should answer.

If “yes” then “Is that right to bear arms worth the life of you or one of your loved ones?”

If  “No” then you’re a selfish bloody hypocrite. Get a life and go to 1.

If “yes” then I still think you’re deranged but I respect your consistent opinion.

1 The solutions really very simple you need to campaign for total gun control – like the British model. Don’t just ban automatics etc. Ban all weapons. I know it will be difficult but think of the lives that will be saved. Oh and forget sporting rifles etc. It would only be sporting if the animals could shoot back – that’d put a few off hunting. 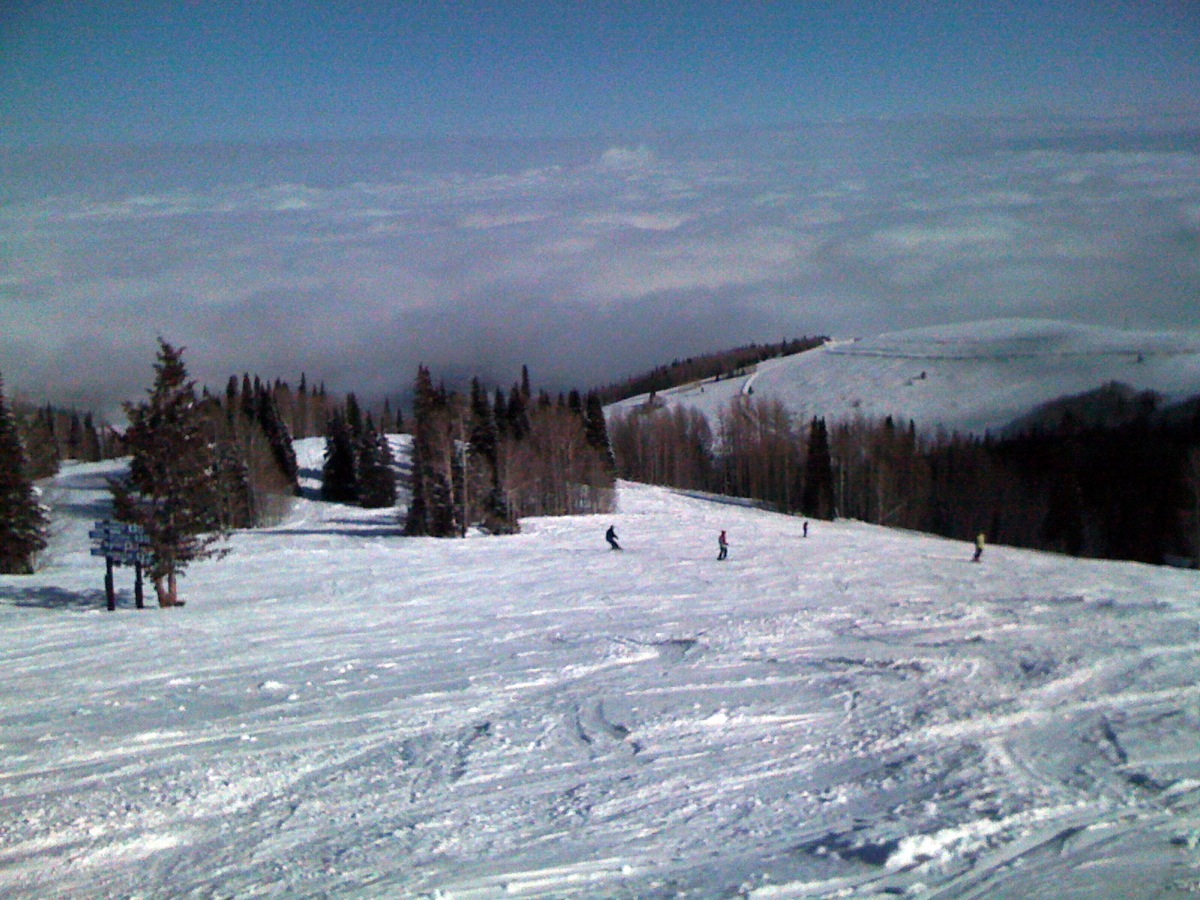 Up at crack o sparrows; out at 08:30; arrive at lift just as it’s starting to catch early tracks. It’s well worth the effort to catch the good snow and before it gets too busy. By 10:30 I’m ready for a well earned coffee.

Pack in at lunch time as the snow starts, need my goggles rather than sun glasses.

Singles line is interesting. It seems like it used by groups to jump the queue rather than just singles. I suppose it’s the US equivalent  of parking in disabled slots.

Some 60 year old snowboarders around today. I can’t help thinking that they’re the same as balding Bob Dylan fans with pony tails. Act your age.

After lunch we go for a pleasant stroll in the biting wind to the Outlet stores. As if I haven’t had enough exercise.

Dinner at Hal and Carols in the evening. Great lamb curry. Angela’s chattering away and remembers us from other visit. Met up with Randy again and some of their other friends. Really lively evening, good company, good food and good wine – what more can you want?

Chasing the American Dream does not count as exercise.

Don’t worry about what people think they don’t do it very often. 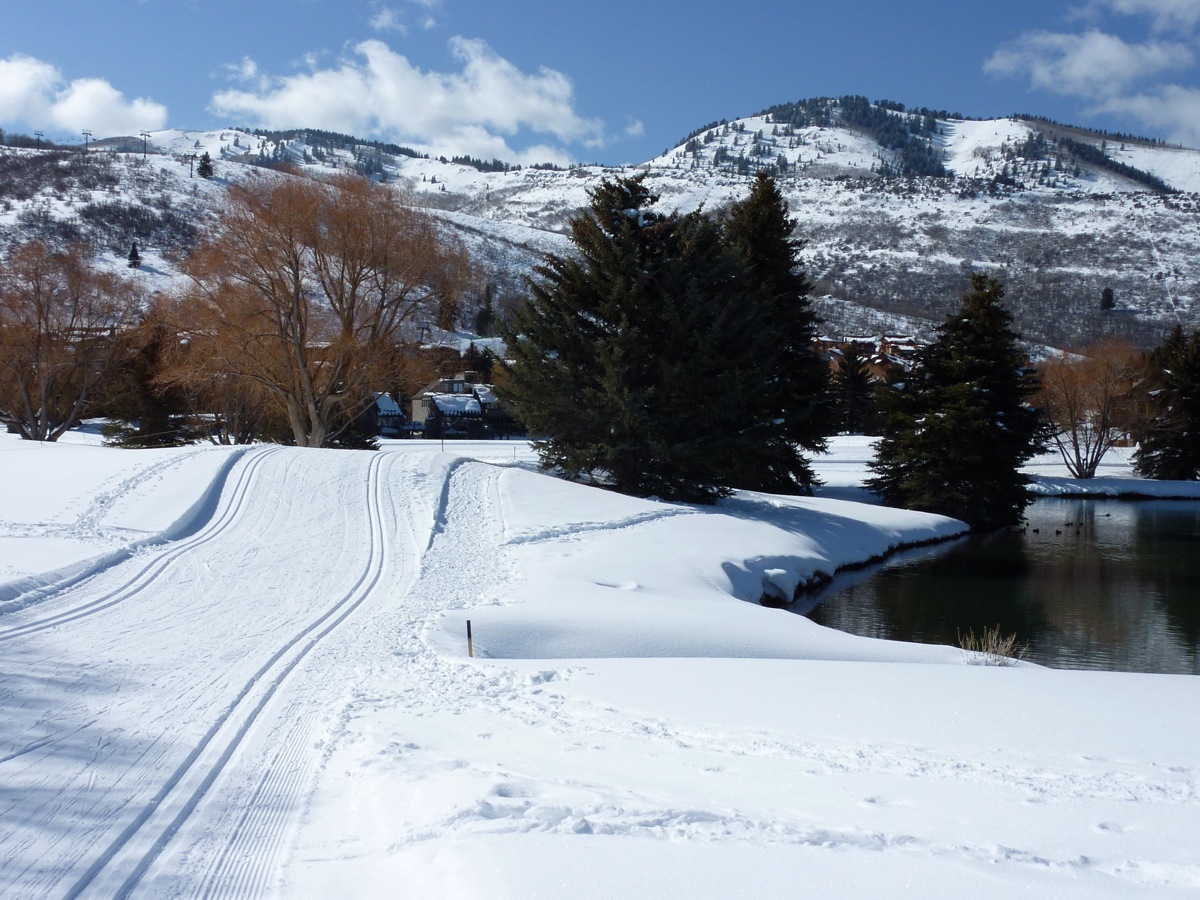 Here we go again from the religion of peace and love.

Extremist muslim websites are abuzz against Muslim members of the British parliament who voted in favour of gay marriage legislation and there are fears that the Muslim parliamentarians could face serious intimidation after extremist clerics issued fatwas against the MPs declaring them to be apostates .

At least three Pakistani clerics have said that these MPs needed to repent and renew their faith, which means that they stand expelled from the Islam for supporting same sex marriages. They have also said that their Islamic marriages stand annulled and they needed to read Kalma again to become Muslims.

Police forces in Britain have taken notice of the fatwas and the threats against the MPs. Also, the MPs have privately said that they fear for their lives after the delivery of fatwas on them by clerics.

Good for them for standing up for what they believe in. As a bonus it looks like not only have they been cast out of this pernicious religion, but they’ve also got the chance to get a new mrs! They should rejoice.

Photos are from previous visits as we’ve that many of Park City there’s nothing left to take!