Up early to drive down to St Kilda to pick Simon and Hayley up. Then it’s a two hour drive out to Phillip Island. Fortunately it’s motorway most of the way. Motorway, with roundabouts; traffic lights; bus stops.

Very scenic island. Visit Churchill’s farm, an old homestead of some early Ozzie settlers. A tad disappointing, but interesting to see the ingenuity and applied common sense of these days. For instance a cooling larder – see picture – where water trickles down over the hessian and the latent heat of vaporisation keeps the contents cool; door closers, to keep the heat out, made of string, pulleys and weights. 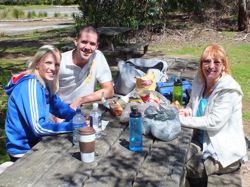 Then it’s a visit to a koala sanctuary. Lavish picnic, actually get sandwiches. Obviously out to impress Simon and Hayley. Never realised their young – the koalas that is – were kept in a pouch. Great board walks helps you get to see them in their natural habitat. Have

the delight of a mating session as a male tries to mount a reluctant female, she’d obviously got an headache. All this goes on up and down a tree 60 feet above ground. She’s a vicious little bitch in defending her honour. Really difficult to know whether the male was successful, being a typical Bruce it could have been over so quickly.

Interesting to hear a young Mother give her children some 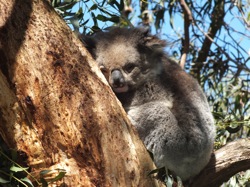 enlightened and impromptu sex education when asked what are they doing – “they’re just fighting”.

Next stop the Nobbies. Supposedly thousands of seals basking in the sun, complete with purpose built centre complete with merchandising 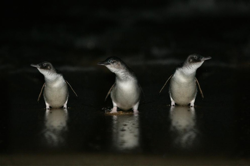 opportunity. Where are they all? As rare as a Taliban in a pinnie washing up the dishes. Apparently all seals have “gone fishing”.

The little penguins – Eudyptula minor (Eudyptula = good little diver, minor = smallest) – come ashore at dusk every night to minimise the risk to them as they cross the beach. A cynic might say its to take the Micky out of the humans, but perhaps it’s just the wonder of evolution. 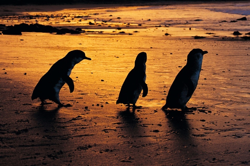 We troop down to the beach to get our good viewing spot. Don jumpers, mountain jacket and waterproof to keep warm, alas no long johns or ski mits. Simon and Hayley are on the premier viewing package unlike us poor pensioners.

Joy, sat there freezing our bits off whilst waiting for 2,061 little penguins to pop out of the sea and poke fun at 1,000+ humans freezing to death. Hurry up. How do we know how many. Well according to a fairy story told by the rangers, they’re counted every night!

Meanwhile, for entertainment,while some numpties on the front row have decided to eat some donuts and are bewildered as to why the seagulls are hovering, swooping down and shitting on them. 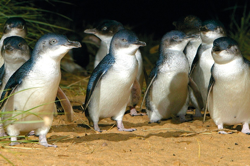 Then better still, in true Oriental fashion to mimic the other family, we have the ultimate stupidity as a japanese family, sitting in front of us, start feeding the seagulls biscuits. As you can imagine I have a few choice words. “Don’t be so stupid. I don’t mind them shitting on you, it serves you right, but why should the rest of us suffer.”

What’s with these surgical masks the Orientals seem to love wearing?Is it some form of national OCD? How can you respect men wearing pink or polka dot masks! 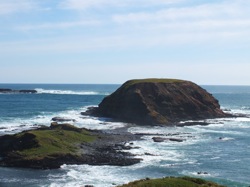 Watch several groups cross. Difficult to really see them in the dusk. Better and closer view of them as you walk up the boardwalk and you can see them staggering home. They stop at regular intervals for a rest / power nap. Mind you can you blame them they’ve been out fishing all day and hopefully have a belly full of food to feed their young with.

No photography allowed – not that the Orientals want to understand that. Apparently flash upsets the little blighters. But oh did we mention you can buy pictures in the gift shop.

Our pictures were download from their iPhone gallery – don’t think thev’ve realised that flaw in their marketing strategy. There’s a great BBC wildlife documentary on it all here.

Then it’s the long drive back. After a great day out with good company.