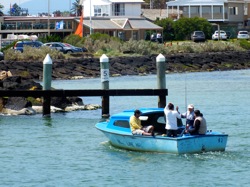 Drove down to Brighton and explored the coast down as far as Mordialloc for a coffee. Learnt a new word Tisane – apparently it means any herbal drink to distinguish it from tea. How sophisticated.

Picture shows the best and cheapest way to get into Oz. Whilst the other shows one boat that just made it. Apparently in Oz they spend at least $1.04 Billion on Asylum seekers – mainly from Afghanistan. A lot of Ozzies are up in arms about it all – so what’s new! 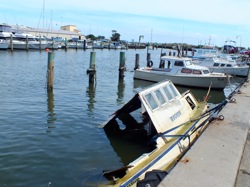 Had a very pleasant walk along Brighton front. Not spoilt, no kiss me quick hats or thong shops anywhere.

Are Ozzies all colour blind? What’s with all the cabs called black cabs and yet they’re yellow.

Why do pigeons and seagulls stand on one leg? Is it to get sympathy and be fed scraps? Apparently no ones really knows. But the strongest theory seems to be that it’s to keep warm. Birds don’t sweat. 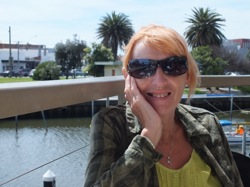 Here the savages go again. Toys out the pram and no doubts an opportunity to riot:

The National Geographic Channel’s Washington, DC headquarters has increased security after being inundated with terror threats over the upcoming release of the film Seal Team Six: The Raid on Osama Bin Laden , according to a source.

The full-length feature film is the first dramatization 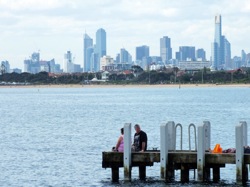 of the U.S. special forces operation that killed the mastermind of the September 11 attacks in Pakistan last May.

According to a New York Post source, the channel has been bombarded with phone calls and blogs posts from Muslim extremist groups warning that anyone airing a film like this is asking for trouble.

A spokesperson for National Geographic told the Post that the channel will air the film no matter what, adding, we are big believers in the First Amendment.

Well now I’ll be doing my damdest to watch it and will post any links to it here. 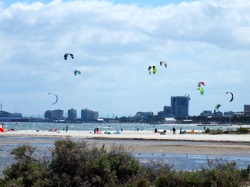 Drive down to explore St Kilda. Again another exotic lunch by the sea watching the wake boarders. Very windy but ideal for them.

Have a pleasant walk along the front down to the fun fair, then it becomes like Blackpool. Joy there’s a market – unfortunately unlike a French market they stay open until 17:00. Windy and cool like Blackpool, but at least the rain keeps off until we get back to the car.

Thousand of cyclists are out racing around the bay. What a healthy place. 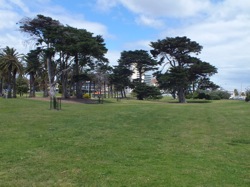 Lunacy abounds in the UK. Fancy being arrested for calling a police horse gay; calling scientology a cult; cafe owner arrested for displaying passages from the bible on a TV screen. Unbelievable, what have we come to. Love this speech by Rowan Atkinson on Free Speech and reform of Section 5 of the Public Order Act – http://www.youtube.com/watch?v=gciegyiLYtY. He advocates desensitising (my theory) and more free speech. 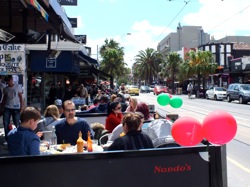 The http://reformsection5.org.uk has my support. Do we really need the police and the courts to deal with insults? Should we not just accept that the risk of insult is a fair price to pay for living in a society which values free speech?

Hello, here we go again. Getting ready for “Christmas” offence:

Halloween banned at Seattle School: “costumes could offend”. why are they pandering to an imaginary offence?