We’re on the road again. Off to Ile d’Oleron. We’ve spent ages browsing the web sites of the caravan parks there to try and find one we like with Wifi. We chose Camping Au Pigeonnier and when we arrive we are not disappointed. A lovely site, great pitches. Not too big. Clean facilities and even trust you to be adult and choose shower temperature – yes they’re hot. Like every where they’re closed over lunch, but the sign says ring the bell and lo and behold they come and serve you the CUSTOMER. Helpful and friendly staff who go out of their way for you – are we still in France?

Nice and sunny when we arrive. Get set up and then it’s bread and cheese for dinner.

and thought of me! 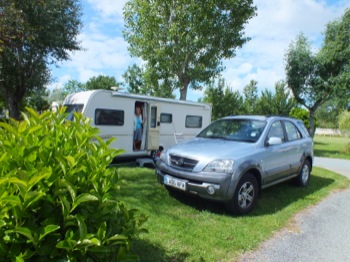 We’ve only been here 12 hours and all the other caravans have left! Mind you there was only one other French caravan here.

By evening this place has become infested with English, a true little Britain – there’s now two caravans here, both English. SO lovely and quiet.

It’s shopping day so I end up as escorting Wendy up to Lidl and E. Leclerc – joy. Sit in the car and do some work.

Finish season 5 of the West Wing – American politics is still an utter mystery but the sad news is we’re not alone!

Walmart launch a new product line! Will ASDA be next?

A man says he reached down to pick up a stick lying in the gardening aisle of a Wal-Mart in eastern Washington state, only to discover that it was a rattlesnake that then bit his hand. 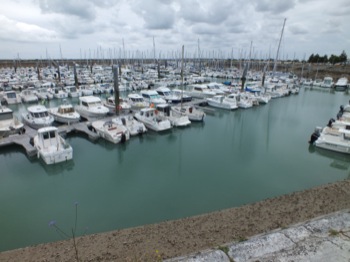 Friday – warm, sun and clouds with some short showers in the morning.

After yet another lazy morning we have a pleasant bike ride into Chateau d’Oleron. A pleasant small town with a massive fort. How did they manage to spend so much on armaments in those days? Plenty of cycle paths. Visit a local pottery – Muses & Hommes. Some amazing Raku pottery, the best I’ve ever seen. Really inspiring stuff. Pity there’s no web site to share with you but some of it can be seen at here. Lash out on a coffee around the market square. All very relaxing and oh so French.

The highlight of the evening has to be a bottle of St Emilion. Hints of vanilla and red fruits. Luscious. Hard decision do I drink it all or save half for tomorrow? Some real tough decisions these days.

How to shoot yourself in the foot.

After the Vatican’s doctrinal book censor condemned an American nun for a book she wrote on human sexuality this week (Sister Margaret A. Farley’sJust Love: A Framework for Christian Sexual Ethics). The book shot up Amazon.com’s bestseller list, from number 142,982 to number 16 and became the #1 best selling religious studies book. Who needs a publicist? The Vatican critiques signal an attempt to reign in America’s nuns radical feminism, a community that the Holy See believes has drifted away from church teaching. 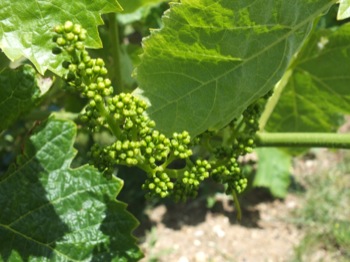 The rest of Europe’s going for austerity measures while this Hollande geezer in France has decided to cut retirement age from 62 to 60. Is this just the start of his campaign to quickly sink the economy and become the next Greece? Never mind I’m sure that Merkel wench will bail them out. As the ex-prime minister of France said “François Hollande seems to have completely failed to grasp the scale of this volcano rumbling under Europe’s feet,”.

Lazy morning again. After lunch we go for a drive around the island – it’s not really that big. Probably best seen by bicycle.

Wendy’s just watching the Jubilee Concert – yes I know it’s a bit late. You have to say as a country we do do 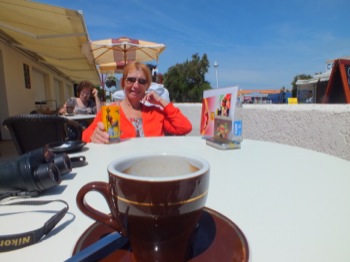 pomp and circumstance rather well. Neve heard of most of these so called stars – quite proud that I’m so out of touch, it would seem such a waste of declining memory cells. Apparently Gary Barlow is not a star from Coronation Street. Bloody sad that I at least know Cliff Richard (is he really Dorian Grey), pink suit and all!! Time to open another bottle.

And can someone tell me why Elton John can’t make do with a Steinway piano and has to have a Yamaha – sad what you notice.

Sadly I expect a lot of these will be getting honours. Now that really riles me. Why do we give honours to people who are already famous; or have made loads of money; or have other awards like sporting medals; or worst still to overpaid, bad role model footballers who no longer even live in this country – yes you know who you are. They’ve already had their rewards and recognition. What about reserving honours for the little people who day in day out do selfless work for charities or the like with little or no reward nor expectation of a reward. 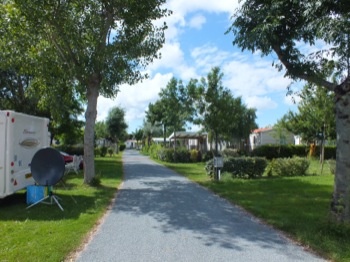 Sunday – rain and grey and miserable.

Hunker down for the day. Chance to get some work done and earn some pennies. Oh the excitement of Alarm Reporting and the latest ACPO / ACPOS policy.

Sites getting really crowded now there’s another two turned up. Now there’s three on site. Amazing really as this is one of the nicest sites we’ve been on and scores 9 out of 10. There’s really only two minor issues roads / exit are very narrow and water supply is very slow. Takes 5 minutes to fill the water butt. Really makes you appreciate water, but even more so, makes you think about the billions in the world who have no ready supply of clean water or have to walk miles for some muddy water. How they’d really appreciate this laboriously slow water supply. So stop whining!

We have British TV thanks to my giant, cumbersome satellite dish. Mind you I don’t know why we bother it
seems to have reached new depths of crap programmes. Thankfully we’ve got season 6 & 7 of West Wing left to enjoy. Who knows we may even aspire to CSI and Madmen.

Anyone out there worried that phytoplankton levels have dropped by 40% since 1940? Well perhaps we should be, it provides half of the food on which all animals depend and most of the Oxygen we breathe was made by it. Why? Global warming strikes again.

Monday – warm, grey and rainy yet again. French forecasts are as unreliable as UK, but they do try and cover all eventualities by showing clouds, rain and sun most days.

Another morning hunkered down. Reading and browsing. Time to get some work done. Thank Dawkins for the Internet. Wendy’s playing on her iPad.

Tuesday – odd showers in the morning but by lunch time were in to sun and cloud.

After lunch we take a bike ride down to the Grand Village Plage. Great weather for it, sunny but not too hot. Have a pleasant break for coffee then it’s back on the bikes for a 3 hour ride. 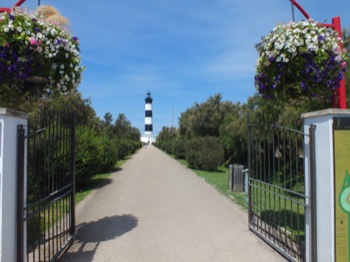 The government finally gets some balls:

Forced marriage is abhorrent and little more than slavery. To force anyone into marriage against their will is simply wrong and that is why we have taken decisive action to make it illegal.

Forcing someone to marry is to become a criminal offence in England and Wales, leaving parents who coerce their children into a marriage facing the prospect of prison, David Cameron has confirmed.

Wednesday – another day of sun and cloud.

This afternoon we do a bike ride down the Oyster trail – needless to say neither of us bothers trying any of these gourmet oysters. We do try and find a nice coffee shop but really struggle. This is a lovely island; very flat; great cycling but cafes seem few and far between. After about 2 hours riding we finally come across a bakers shops thats open and sells coffee and tea – Wendy goes the whole hog with afternoon tea and cakes. They sell some awesome cheese bread and a nut bread. Another great ride. 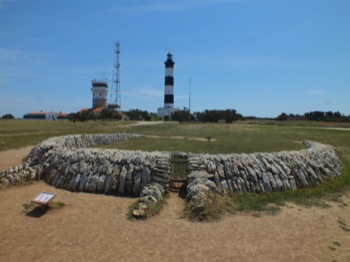 Decide on a drive up to the Phare de Chassiron – a lighthouse on the Northern tip of the island. it’s lovely up their and the lighthouse is set in some stunning grounds – see pictures. There’s also a picture of of a U shaped stone wall. Very clever. They used to be built on the seashore. Tides would come in, along with the fish. As the tide went out the fish would be stranded – now ain’t that neat.

After a leisurely coffee we go and have our lavish picnic in a field – sure know how to live – a pear and some trail mix.

On the way back Wendy calls of for her weekly fix at E.Leclerc, spear no expense this week and pass on Lidl. After choosing the wine and coffee I have to sit out in the coffee shop reading.

Meanwhile it’s highlight of the week tonight with bread and cheese for dinner. We have those two delicious cheese and nut breads from yesterday – wow.

Letter to The President of the EU

You may recall that 3 years ago I wrote to you about allowing this third world country – France – to remain in the EU. I suggested that you give them an ultimatum to get rid of those holes in the grounds they call toilets within three years and to find or replace all the toilet seats that have been misplaced, stolen or they were just to tight to buy. Well they haven’t. It’s still 3rd world out here. Which means either you’ve ignored my suggestion or in typical French fashion they, the French, have blatantly ignored yet another EU directive – now theres a shock.

I realise you’ve got a bit on your plate at the moment, what with Greece and Spain, but heres your chance to make an historic difference and save a shed load of money and grief in a couple of years time. Why not just kick this third world country out of the EU now before this Hollande geezer, who seems to enjoy frittering money away like a fat bimbo feeding a bucket of nickels into two fruit machines at the same time, ends up in the same straights as Greece and comes cap in hand “please Sir can I have some more”. They’re already clearly living beyond their means and this new geezer just seems to want to accelerate their demise.