Wednesday – grey and cloudy, but at least it’s warm. 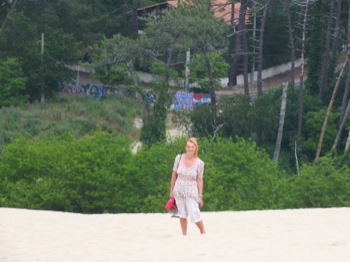 Took a ride out to the Dune du Pyla. Apparently the highest sand dune in Europe. Fortunately they provide steps to walk up to the top. Only 115M but knackering as the last 30M are on very fine sand.

Do the French thing and have lunch out for a change.

Visited Campsite Bimbo, our 2nd choice, for this area. Pitches were lovely but the place was virtually empty, only one French caravan on the whole site, but certainly worth bearing in mind for the future. 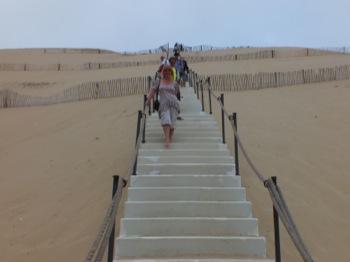 I see the Saudi Arabian religious police have just got their come uppence. They stop an arab women and asked her to leave the shopping Mall for wearing nail polish – obviously not a place to visit with such criminals freely roaming the streets! The good news is she was having none of this. Told them it was none of their business and she was not leaving. Best of all she
told them this is all going out live on YouTube and twitter for the rest of the world to see. Good for her. Mind you didn’t get to see the aftermath. Did they stone her to death; cut her offending fingers off; or merely have her flogged. 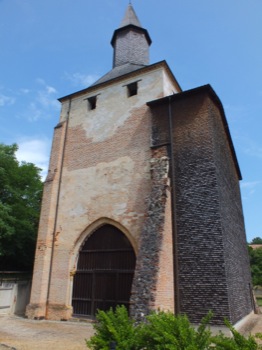 Lazy morning, then in the afternoon Wendy goes up to Lidl for the highlight of her week. She drops me off at MacD for one of the best and cheapest coffees in France and free high speed wifi. I need to download some more books onto my Kindle.

Most of you have probably never heard of Steve Mahan. His claim to fame however is that he is blind and yet was driven by Googles self driving car to the local Taco Bell and back. Obviously an epicurean with exquisite taste and good to see that all of Googles investment in this new technology is not being wasted.

Friday – it ain’t half hot. 31C and no breeze. Why did we ever leave belthorn?

Lazy day around the caravan, reading and keeping out of the sun. We were going for a bike ride down to the 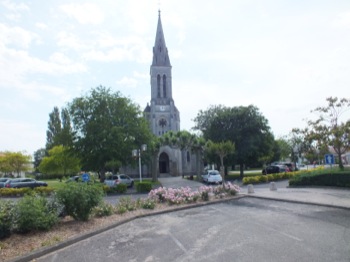 beach but just too hot to move.

Nice cold beer and dinner on the patio – still too hot.

Just watched this hilarious ventriloquist – Nina Conti – on YouTube, see what you think.

Saturday – hot and sunny, but thankfully turns cooler in the afternoon.

Another treat with the latest rant from Pat Condell. Entertaining as always. 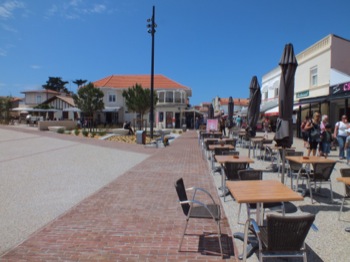 Apparently rickets, caused by lack of vitamin D, is once again rearing its head. This time not caused by poverty but by parents keeping children out of the sun. Vitamin D, the sunshine vitamin, is a major factor in protection against breast, colon and prostrate cancers. A major study in the US shows that people are 4 times more likely to die of these internal cancers through lack of sun exposure than skin cancer itself.

Lazy day around the caravan so Wendy can watch the jubilee and the final of the apprentice – both equally boring. I thought we’d escaped the raw a ma tax of the Jubilee Celebrations, but no, Wendy’s organising a street party for Tuesday afternoon. That should confuse the French. 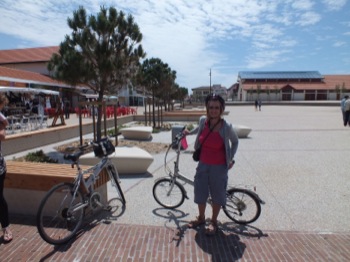 Lazy morning around the caravan followed by a bike ride after lunch down to the beach. Lovely little town. Just full of French stuffing themselves for lunch.

Wendy’s whipped the Brits into a Queens Jubilee Celebration frenzy. Now they’re agreeing who’s doing / bringing what in a Jacobs join. No mention of 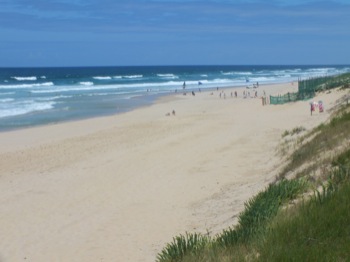 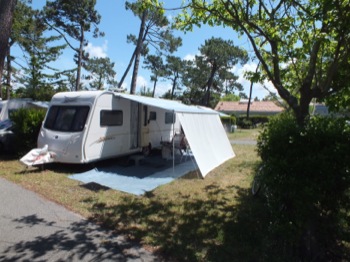 amazing one couple bought a load of bunting and flags – joy. Even more joy as they share it around and we end up decorating the caravans – beam me up.
I’m told we’ll “just nip to L’Clerc for some cocktail sticks”. Now I know they took a bit of finding but 45 minutes, give me strength.

After lunch we started packing up for the move to Ile d’Oleron tomorrow.

We put some chairs out on a spare pitch in order to try and deter anyone taking it. Then 30 minutes to go before 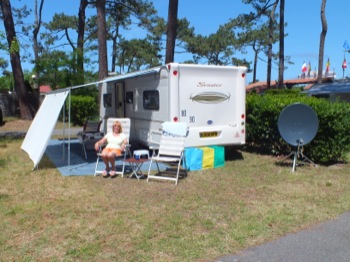 the excitement really begins a German turns up and wants that pitch – Parkinsons Law of Maximum Perversity
was seen to be obeyed. Bloody typical. I hope he felt really guilty 30 minutes later when we started the street party.

There we were, about 12 Brits and one lonely German, all decked out in street party gear with Union Jacks and bunting. A pretty good evening was had by all, including  the lonely German who shared some quality German beers with us all. Good news is there was plenty to drink. Some of the older 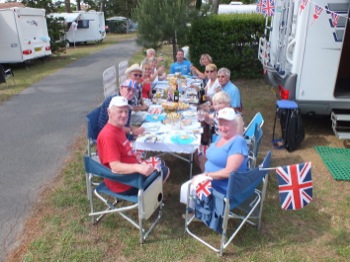 couples had even splashed out on Champagne – Rule Brittania

Meanwhile the growing worldwide obsession with blasphemy goes on unabated. Not just in Christain but also Muslim countries. The latest shows that United nations has finally got some balls.

Pakistani judges are often pressured to convict people accused under the country’s blasphemy laws that call for the death penalty for anyone insulting Islam, a special U.N. representative said.

Pakistan’s blasphemy laws call for the death penalty for anyone insulting Islam, the Koran or the religious character of Muhammad. Pakistani Christians live in fear of being arrested under the laws, which critics say are often misused to settle personal scores or family feuds.

Gabriela Knaul, the U.N.’s Special Rapporteur on the independence of judges and lawyers, told a news conference that lawyers are also reluctant to defend clients accused under the blasphemy laws because of intimidation. Knaul said:

I am especially concerned regarding cases brought under the so-called blasphemy law as it was reported to me that judges have been coerced to decide against the accused even without supporting evidence.

They are afraid of reprisals by local communities because of their interpretation of the law\.