09:00 Mike picks me up to do the Silver Lake Mid Mountain hike over to the Town Lift in PC. We stop off at the Montage for coffee, not free this time, need to take Fiona with us to get it free. Nice to hike at a decent pace and have no bitching about the hike – “are we there yet”. It’s a lovely shaded hike, but wow is it hot, we seem to be going through a real hot spell this week and for the next 10 days. No sight of rain in the next 10 days.

Wendy’s at the CC and comes home loaded up with salad and not one but two Wholefoods baked cheesecakes, that were due to go to the pig far – those pigs must be the best fed ever, and yet American bacon is so fatty and you need to wear safety glasses as it shatters when cut. These cheesecakes are to die for.

A quiet night in with Carmenera and Netflix.

Lazy start. Then off clay pigeon shooting with Mike and Marianne.

Back home for a trip to Walmart and Whole Paypacket.

Could have gone to a TGIF Oktoberfest but passed and had an alcohol free night with Outlander. What a hot day and it’s due to get hotter next week.

Up early as Joe picks me up for a stroll with him and Mark. It’s a 5 mile marathon up the Rail Trail to the Silly Market, not that we stopped there, and back. 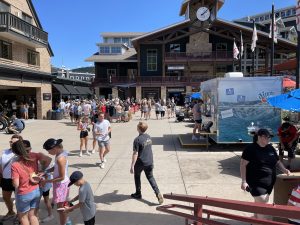 Lazy afternoon. Caught the bus up to PCMR. Plenty of crowds there, some long queues and very hot in the sun. Ideal training ground for Disney so tempted to join one of the 1 hour queues, who knows what for, in the blazing sun.

H&N came round for dinner. A great evening, good food and good company.

Wouldn’t it be nice if cheesecake was a diet food. In my dreams.

Just finished reading “Rigged” by Mollie Hemingway about how the media, big tech, and the democrats seized the American elections. Worrying. I’d always doubted republican claims that the election was rigged but after reading this I see it in a new light.

“Biden won Arizona, Georgia and Wisconsin by fewer than 43,000 votes combined. Had just 22,000 of those votes flipped from Biden to Trump, Trump would have one those states and the Electoral College would have been tied 269 for each candidate. Such ties are decided by one vote for each House delegation, of which republicans controlled a majority”. The shenanigans in those three states were enough to make anyone doubt the veracity of the American electoral system. 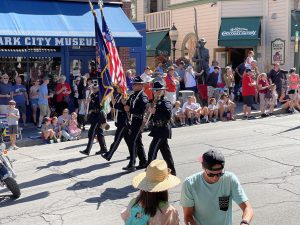 It’s Labour Day which in PC becomes Miners Day. And yes, you guessed it, there’s a parade. 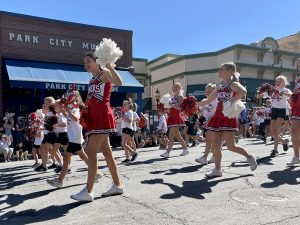 We go with Mike on the bus up to the parade. Can you believe Mike’s lived here all these years and never been to it. The parades bigger and better than Coalville’s but they don’t throw out sweets and goodies like at Coalville, our grandkids would have been a tad disappointed. 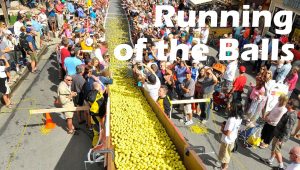 Part of Miners Day Parade – buy a golf ball for $10, numbered of course, and they roll it down the hill. If it comes in the first 50 you get a prize. All proceeds to charity.

Had a walk down to the park for the rest of the activities but it was just too hot.

Lazy night in with dinner on the deck. Awesome.

Why don’t we have parades in England anymore? Too many snowflakes, wokes and libtards who would probably find something in it that offended them.

Led an easy hike up Dubois and dow Colin’s trail – one of my harder hikes with 600 feet elevation. It’s in the 90’s again. Maximum temperature for PC in September is supposed to be 71 F. There’s just no let up.

After lunch we caught the bus up to Main Street and had a search for a decent PC Tee short. Finally found one and then to top it off saw another in the High West store. Bought both. Called in at the library to take Rigged back and picked up Hamilton’s biography, the one the musicals based on, and Rage by Bob Woodward about life in the White House under Trump.

Tea (AKA dinner) out on the deck and then had a leisurely read. Another no alcohol night.

In Great Britain, where it’s almost impossible to get a gun, a woman is three times more likely to be raped than in America, according to a study by David Kopel, a professor of constitutional law at Denver University.

Here’s another telling comparison between gun-free UK and gun-owning US: In the United States, only about 13 percent of home burglaries take place when the occupants are home, but in the UK, almost 60 percent do.

Professor Kopel explains the disparity: “American burglars . . . avoid occupied homes because of the risk of getting shot. English burglars prefer occupied homes, because there will be wallets and purses with cash.”

If a seven-year-old boy can be thrown out of school for saying his teacher is “cute” but hosting a sexual exploration or diversity class in grade school is perfectly acceptable — you might live in a kakistocracy.

If hard work and success are met with higher taxes and more government regulation and intrusion while not working is rewarded with Food Stamps, WIC checks, Medicaid benefits, subsidized housing, and free cell phones — you might live in a Kakistocracy.

If you pay your mortgage faithfully, denying yourself the newest big-screen TV, while your neighbor buys iPhones, time shares, a wall-sized do-it-all plasma screen TV and new cars, and the government forgives his debt when he defaults on his mortgage — you might live in a kakistocracy.

If being stripped of your Constitutional right to defend yourself makes you more “safe” according to the government — you might live in a nation that was founded by geniuses but is run by idiots. 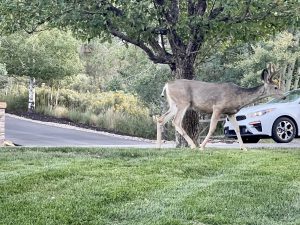 Joins us for dinner most evenings.

Up not quite so early, 10:00 start to give me time for coffee and newspapers, ready to lead an easy bike ride.

Wow, it’s another scorcher. Stop off for coffee at 5 Seeds and I get my coffee free – how neat is that. For me having to go down to Willow Creek to start and finish it’s an 18 mile ride – good for you.

Carol and Angela come round for lunch.

Then like mad dogs, in the scorching sun, Wendy and I go for a stroll along the Willow Creek trail and stop by the stream for a rest.

Awesome here leading hikes and bike rides. Enjoying the scenery; the birds; beaver dams; deer; even the occasional Moose. How lucky can we be to have all this at our finger tips. 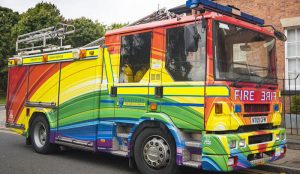 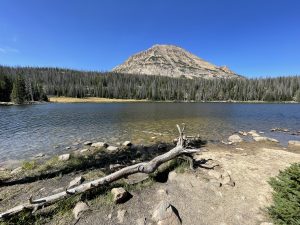 Off up to Mirror lake for a short stroll around. A really pleasant place and then Wendy has lunch by the Provo River waterfalls.

On our way back into Kamas we learn of the sad news of the queens death from Kurt. I pop into the garage there to see if they have any of their famous Apple fritters left. Alas none left. Apparently you have to order them the day before and pick them up at 06:00, might be some left by 08:00 but unlikely. They inform me our Queen is dead.

Call into freshies for a lobster roll – $27 can you believe it – but I’m worth it. Wendy picks up some sushi from Fresh market. Then it’s a quiet afternoon in reading and watching tributes to the Queen. 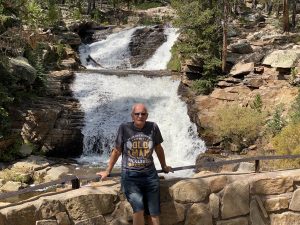 Tea out on the balcony and as usual the Deer come to visit.

We fly our small Union flag at half mast. A very sad day. 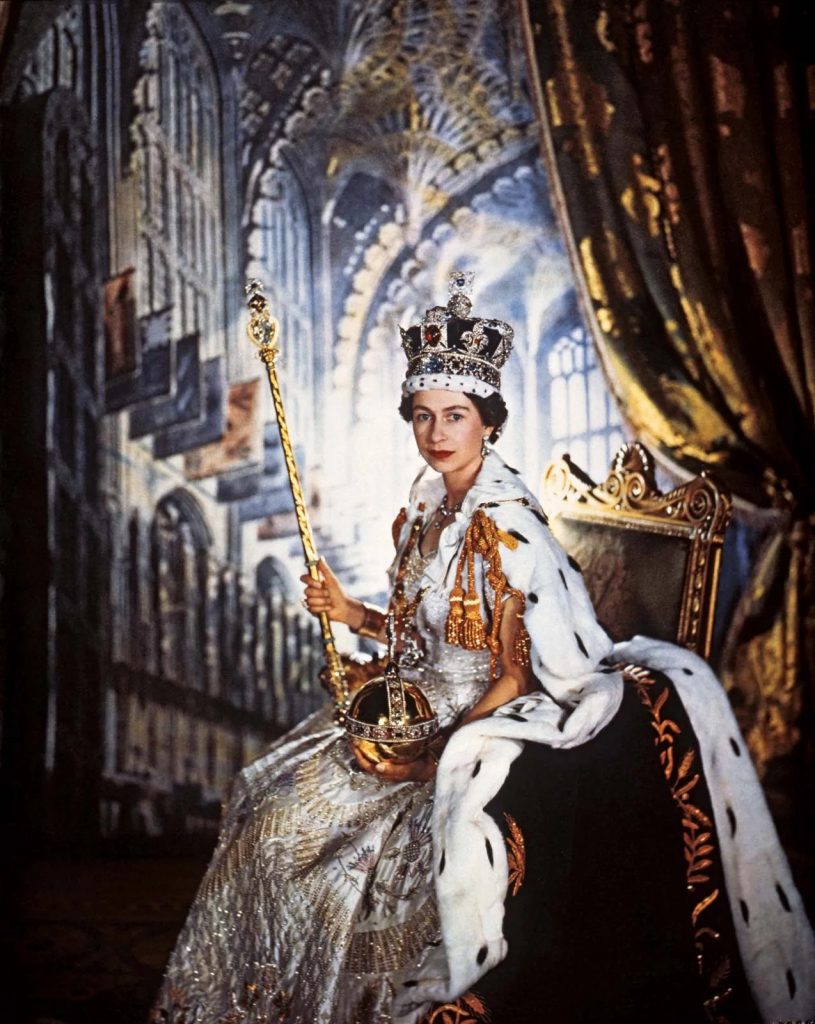 Here’s to remembering our Queen. A great Queen who devoted her whole life to the task and did an awesome job of it. Such a pity we don’t have the politicians these days with the same degree of dedication and integrity.

Sad isn’t it that the top google search on such a tragic day is “will I get a day off for the funeral”. 70 years of dedication and service and that’s all those tossers can think about.
This entry was posted in Uncategorized. Bookmark the permalink.