Wendy went off to the CC for the day.

Our walk up to Stuart falls never materialised so I explored RTS Trail for an easy hike. Not too hot and quite an easy stroll.

Wendy gets Jasper a great bike from the CC, we take it back along with the girls bikes when they leave. Sadly the weather means he doesn’t get much chance to ride it.

If you find yourself feeling useless, remember it took 20 years,
trillions of dollars, and four U.S. presidents to replace the Taliban
with the Taliban. 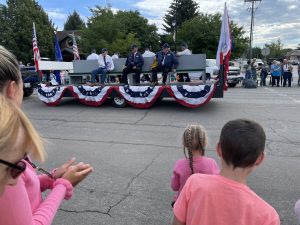 Up early for a trip out to the parade at Coalville. Easy to park up and we get our usual spot outside the petrol station – regulars. Kids just love it. Bags and bags of sweets, as the kids scurry everywhere to retrieve the copious sweets thrown, including a beach ball and Fiona even gets another tee shirt. As Jasper says “the best day ever”. 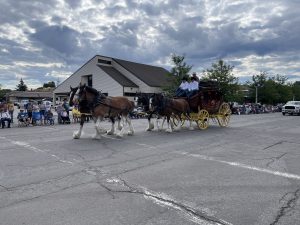 Then we drive to the Park City library for a water fun day with water slides and other amusements. Free food, free drinks, free books and free beach balls. Amazing. Just one of the many reasons why we love Park City.

Then it’s back home for Fiona to share the stash of sweets the kids got at the Coalville parade. 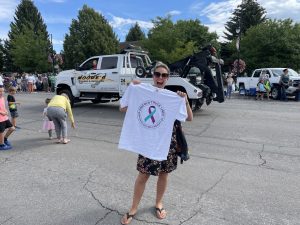 What a fun filled day we have had.

Lazy afternoon and get into the book “Rigged”. Difficult to assess the independence and truth of it but if even a fraction of the conspiracy against Trump by the democrats, press and big tech is true then it’s truly worrying. 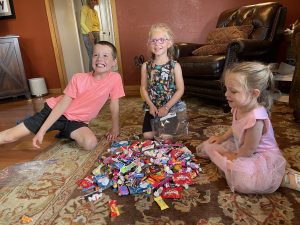 Mike comes round for dinner, complete with his giant awesome tiramisu and a bottle of limoncello he’s made. It take ate least a month to mature and tastes awesome, what a bite it has. Fiona loves it to. He must be mad to come to the war zone, but just loves being with the kids.

How nice it is when friends take such trouble to make tiramisu and even limoncello as a dinner gift. 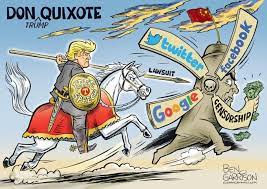 Consider this. Twitter gets away with banning a sitting president – Trump – and yet still allows terrorist, jihadis and the Ayatollah Khamenei’s access. Says a lot about big techs political agenda.

If there is one thing in American politics that I find most abhorrent it’s this. How can they get away with it? Why aren’t the American public taking to the streets?

Well if Trump gets back in in 2024 I hope the first thing he does is close Twitter down.

A rainy sort of day.

Take the kids down to Walmart for a treat as a reward for good school report and gold star. 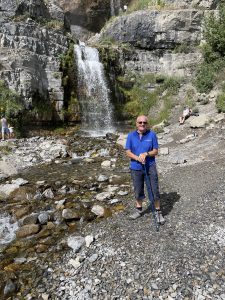 Wendy’s off to the CC. I go on a walk with Howard. It’s another one of his bucket list items, a walk from Sundance up to Stewart Falls. It’s a pretty tough walk due to the trail being so rough. Uphill all the way to the falls and then thankfully downhill all the way back. Still searching for that circular walk that’s down hill all the way.

Take Jasper on a bike ride down to the White Barn and back on the great bike he’s borrowed from the CC. He’s so excited.

In the evening we go out for dinner with Mark and Ruth to Squatters. Then after dinner we go round to their place. The girls watch some chick lit film downstairs whilst Mark and I put the World to rights upstairs. One way of escaping the rug rats. Another great evening.

government by the least suitable or competent citizens of a state.

“the danger is that this will reduce us to kakistocracy” 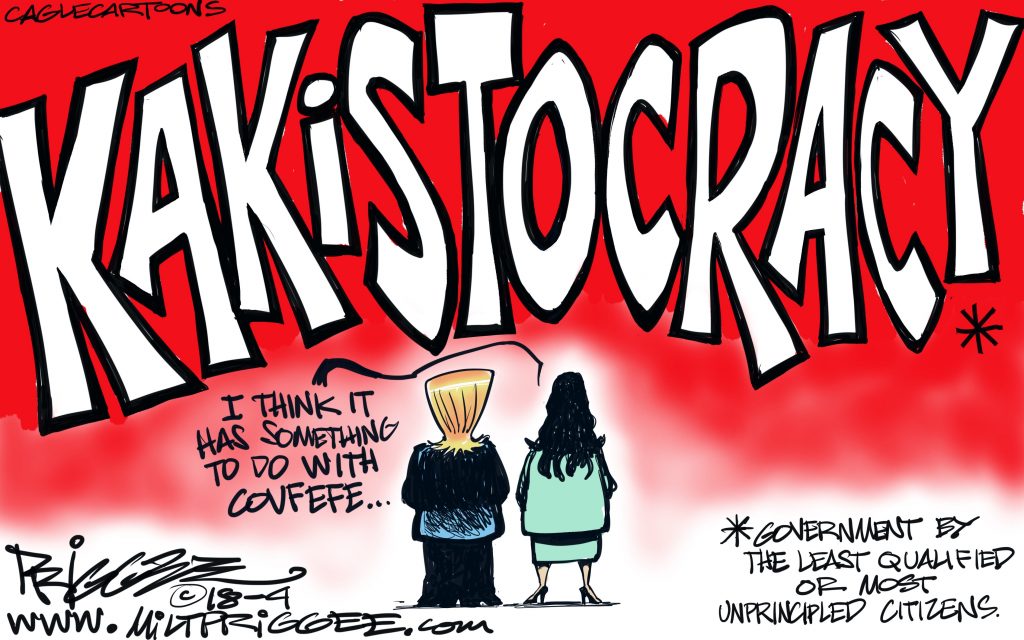 If plastic water bottles are okay, but plastic bags are banned, you might live in a kakistocracy.

If you can get arrested for hunting or fishing without a license, but not for entering and remaining in the country illegally — you might live in a kakistocracy.

If you have to get your parents’ permission to go on a field trip or to take an aspirin in school, but not to get an abortion — you might live in a kakistocracy.

If you MUST show your identification to board an airplane, cash a check, buy liquor, or check out a library book and rent a video, but not to vote for who runs the government — you might live in a kakistocracy. 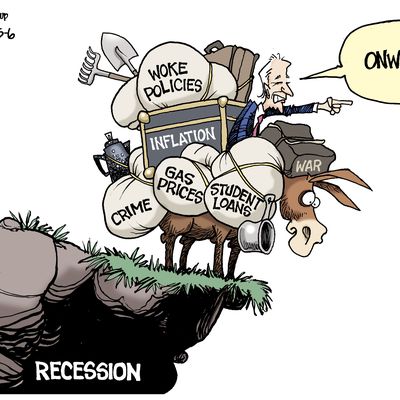 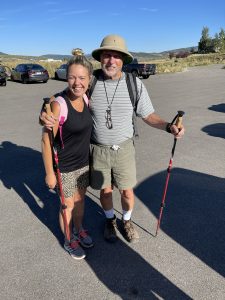 Up early again to lead an easy hike around trailside. That pain in the ass women, who shall remain nameless, but we all know who she is, turns up on the walk. And yes, she’s still a pain in the ass. And what’s more she’s threatening to come on tomorrows bike ride. Sadly Fiona gets the benefit of her inane diatribe.

After the walk Mike and I drive down to Feldmans for an awesome pastrami / corn beef on rye lunch, AKA a Rachel.

Mike is determined to give me 6 bottles of wine from his stock of over a hundred, which considering he doesn’t drink hardly ever goes down. I finally get him to agree to me paying him $10 a bottle. He’s not happy but it’s a great deal for me and hopefully he’s not out of pocket. 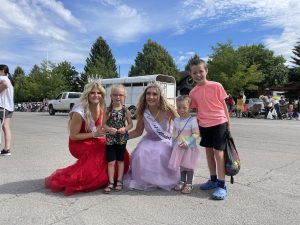 Up at the crack of sparrows yet again to lead an easy bike ride around the Swanner Reserve. Thankfully for both Fiona and I the pain in the ass doesn’t show. Afterwards we stop for a well deserved coffee, while Fiona rides back to relieve Wendy of rug rat duties.

For Mike and I its a long 18 mile ride as we had to ride down to Maxwells, do the ride and then it’s the long slog back up to home. 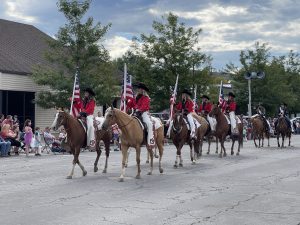 More of the parade.

Mike tootles off to the bike shop to get a speedometer and odometer fitted to his 50 year old bike. I’m sure it’s so he can bitch about my speed on these rides.

Wendy and the kids come back from the library but no sign of Mike. Wendy saw an ambulance and police cars tending to someone who had fell off his bike at the crossroads. I drive up to the bike shop to check where Mike his and sure enough it’s Mike who has fell off his bike and been taken to ER. 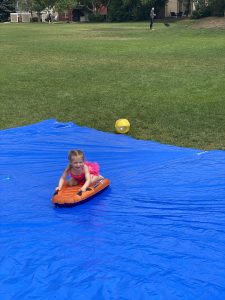 Wendy and I dash up to ER to see Mike. Sure enough he’s fell off. The eBike he’s borrowed had a flat as he went around the corner and he fell off. Fortunately he was on a bike path and not the road. He ends up with some bruises, stitches in his lip, inside his lip and fingers. Shaken up but not too bad. His sense of humour is intact and he’s as argumentative as always. He was lucky. They discharge him and we take him to our place. Marie Ann pops round to see him, and then despite much protest we talk him into me driving him home and leave his car on Yonex rather than risk driving.

I go shooting with Joe in the evening.

If, in the nation’s largest city, you can buy two 16-ounce sodas, but not one 24-ounce soda, because 24-ounces of a sugary drink might make you fat — you might live in a kakistocracy.

If an 80-year-old woman who is confined to a wheelchair or a three-year-old girl can be strip-searched by the TSA at the airport, but a woman in a burka or a hijab is only subject to having her neck and head searched — you might live in a kakistocracy.

If your government believes that the best way to eradicate trillions of dollars of debt is to spend trillions more — you might live in a kakistocracy.

Well deserved lazy start to the day after all those early activities.

Jasper and I pick Mike and Joe up to go bowling at Heber. Jaspers on form on his first game. Lunch at the bowling alley, Jasper manages to scoff 4 chicken strips and chips, hollow legs, takes after his mum. 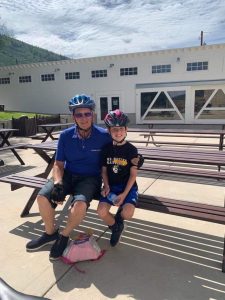 In the afternoon, Fiona and Wendy skive off to the shops so I’m on rug rat duty. Mike hangs around for a while and plays bingo with the kids. Later on Esther decides to have a serious meltdown. Over a hour of ear shattering screaming. Even my watch is warning of danger to my hearing. Then Beatrix manages to tare Jaspers nail off, resulting in more screams from Jasper. Finally get to put a plaster on his finger. I surrender and recall Fiona and Wendy to deal with the trauma.

Wendy and I troop off down to Papa Murphy’s for pizza. What a waste of time they are. After giving my “I keep thinking I’m a customer” speech to a scruffy 10 year old yeti from the kitchen who is allegedly the manager we storm out. Of to Walmart.

Carol and Angela come round for dinner.

A poll was conducted by a national polling firm, “YouGov.”

These questions were asked to average people on the street:

What percentage of the country is black? Answers 41%… Actual 12%.

If you watch commercials, you will think it is 90%.

What percentage of marriages are mixed race? Answer 40%…Actual 1%.

If you watch commercials, you will think it is 60%.

We think a quarter of the country is rich.

What percent of Americans are vegetarians? Response? 30%… Actual 5%.

What percent of Americans live in NY city? Answers? 30%… Actual 3%.

What percentage of Americans are ‘transgender? 22%… Actual number 1%

What percentage of your fellow citizens are Gay? Result? 30%… Actual 3%.

So why do people have such inaccurate thoughts on these counts? THE MEDIA! The media run race, gender, and wealth stories constantly. Result? We are being brainwashed by the media. Hitler’s propaganda minister Joseph Goebbels would be proud if he had half this success.

Disney just went full-on “gender” They will no longer welcome guests with the traditional “Welcome ladies and gentlemen, boys and girls” Why? Because 1% of the population dictates to the other 99% (that would be the vast majority) and corporate America falls for it.

Regardless of what you think, less than 20% of Americans use “Twitter” yet Twitter controls 80% of public opinion. Why? The media.

Next time you are thinking Americans have changed and not in a good way, remember, it’s fake. Most people think just like you do, but the media has brainwashed Americans with their constantly misleading broadcasts.