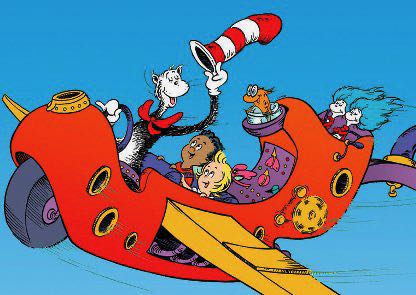 To the Thingimajigger, off on an adventure, this time 6 weeks in France because that Biden geezer won’t let us back into the USA. Any more of it and we’ll cancel their independence.

Off down to Brett’s, a 4.5 hour journey that ends up taking 6 hours. Why Am I surprised. a 44 minute delay on the M6 near Stoke, now there’s a surprise. Emergency repairs to about 10 feet of barrier, not that any of the barrier intruded onto the carriageway. So let’s close off two lanes, cause mayhem while we look at it. I suppose it could easily be left as is with minimal risk or even fixed overnight with minimum hold ups. But no that would be way too sensible and not half as much fun watching the mayhem. Then for some bizarre reason our satnav has decided that going around the M25 is a good idea. That’s the problem when you trust software, you really have to remember most of this shit has been written by a 10 year old with zero common sense, no social skills and still needs his Mummy to tie his shoelaces.

Finally get to Brett and Karine’s for a very warm welcome and a superb barbecue of South African sausage, black puddings, pork ribs and mackerel. Plenty of meat, oh and a few veggies skewers, and my favourite corn on the cob. Am I turning into a veggie? Also not to forget a couple of Jever’s and a bottle of Carmenra. Sleep the sleep of the righteous that night.

Jever, the best beer in the world. Brewed with the Tetnang Hop according to the Rheinheits Gebot by Germans who know a bit about beer. Such a gorgeous dry beer.

Brett and I are off kayaking down the coast to Climping for a coffee. It’s a grey day and sure enough as we get to the beach it decides to rain. Not to deter intrepid kayakers, we go for it. It rains all the way there and when we stop for coffee the heavens open up for about 20 minutes. Finally slackens off so we set off back. Now Bretts been very good at looking after his Father and helping with the launch into the sea at high tide. It’s really quite flat out there but he manages to push me off into a freak tsunami wave. The damn waves 3 foot tall and my kayak dives into it only to be ripped to one side and eject me. Must be the first time I’ve ever fell out of a kayak – damn open top kayaks – but I live to tell the tale of how my son tried to kill me off.

It rains all the way back. But despite the rain and the attempt to drown me we had a great morning. Surviving an attempted drowning and freak tsunami made it all the more memorable.

After lunch Wendy, Brett and I drive down to Little Hampton for a pleasant stroll along the seafront. Needless to say it’s ceased raining by now. What a pleasant little seaside resort it is. Poor Karine having work on a bid so can’t join us.

Back for roast lamb for tea – well I suppose we’ll have to say for dinner as we’re “Down South”.

Then it’s off to Portsmouth for the overnight ferry to Cherbourg. Check in is just chaos because as well as passports you have to have your statement of honour that you don’t have covid symptoms and a printout of your covid proof of vaccination. Of course there are plenty of numpties in the queue, especially geriatrics, who have neither or have them hidden away safely in the far reaches of their boot. Common sense nil, chaos 10. Who are these lunes. Just proves that we really can’t rely on common sense to help contain covid. We’re doomed.

Finally get on board and it’s straight to our cabin as Noddy’s way past Big Ears so time for bed. 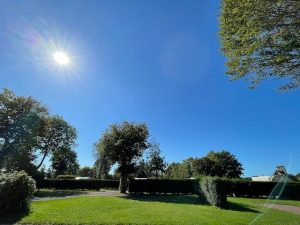 Arrive in Cherbourg on time at 08:00 as promised. We’re lucky to be one of the first 10 off and French immigration can’t be bothered to see our covid documents, they just want passports.-.hallelua But you can tell times are hard when they only have one date stamp between two of them. Quickly immigrated and 40 minutes later we’re on our camp site ready to set up the caravan.

Oh the joys of setting up our caravan! Takes about 40 minutes to get it fully operational, but then we have the awning.

Go shopping for wine, brandy, cheese, bread and a few other vitals while the grass dries. Drive down to Leclerc at Carantan. 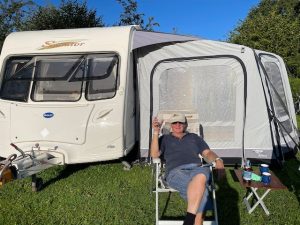 Never mind we have a divorce proof blow up awning, it’ll be a doddle. 50 minutes and a lot of swearing later it’s blown up just needs me on me hands and knees to peg it out. Whose idea was it to take the windows out. Spent 30 minutes getting them back in.

Finally sit down in the sun for a beer followed by my first French wine in over a year. It’s a St Emillion, won a silver medal, and tastes like liquid soil. Wouldn’t even use it to clean drains with. For the first time ever I bin a full bottle of wine. Get me a Carmenera or Zinfandell. Move onto 2nd bottle, pretty good. 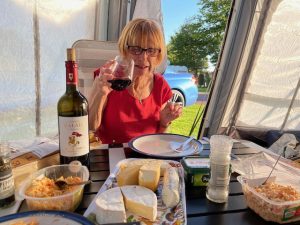 Tea is bread, cheeses and wine. Now I know we’re in France.

Filling the 40 Litre water barrel for the caravan is always a lesson in patience and a reminder of how fortunate we are to have water on tap, even if it does take at least 5 minutes to fill it. 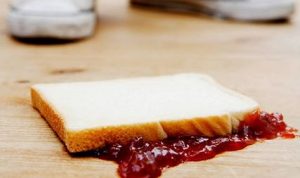 Now the scientifically inclined amongst you are probably aware of Pqrkinsons Law of Maximum Perversity, commonly referred to as sods Law, which succinctly stated is “If you push a slice of toast with jam and butter on it off a table it will more frequently land jams die down.”. Now if we assume the buggeration factor is at least 60% of them will land jam side down. Then my addition to the law states that “… the buggeration factor is directly proportional to the age of the person involved.”.

In other words the older you get the more Parkinsons of maximum perversity will screw you over in every way possible. It’s just one of the immutable laws of the universe similar to the laws of gravity. 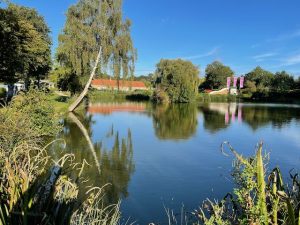 Have a stroll into town.

Book virgin flights to Florida for Mid January to endow February (premium ) and April and May (upper class – decide to splash out as it’s two flights).

Ok, question for everyone, what are the most famous alcoholic beverages produced in France. I’m sure everyone will say wine, probably closely followed by brandy and then even calvados. So why is it that if you go to the drinks isle in any supermarket there’s isle upon isle of wine, at least an isle of whisky, rum and calvados and yet merely one bottle of brandy – usually Armagnac. Obviously the French drink hardly any brandy. What do they know that we don’t? 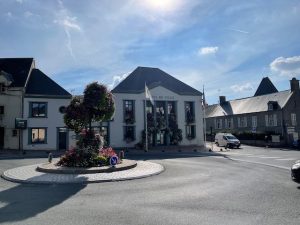 Town hall. Why are they always so lavish?

Drive into town for more vitals. What no Aldi. Wow a brand new one right next door to the Mosquitos (Intermarche).

Pete and Brenda come round for drinks at teatime. For me it’s beer, wine then an Armagnac. Pleasant evening in the sun putting the world to rights. We’re all agreed the countries gone to the dogs. We need someone to get grip of the snowflakes, wakes and libtards. Sort the illegal immigrants; sort the protestors, no problem with peaceful protest that doesn’t infringe others right; introduce covid vaccine passport to encourage the SS (Stupid and Selfish) to have the vaccination, bring back indoor masks and ban mass events, you don’t need to be a professor of virology to see that these are just sensible measures.

Rabbit stew for tea followed by a snooze while Wendy watches that tripe “Sex Education” – all that talk about sex but not even a glimpse of a naked body. What a swizz. 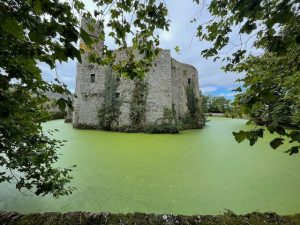 Lazy start then off for a drive down to Lessay and then round to the Castle de Pirou – see Trivia below. Paid e7 to get in. Argued with the receptionist that I was unemployed and therefore entitled to the discount. Didn’t win. Typical French it closes for lunch – it’s oh so difficult when you at least 3 staff to arrange lunch time cover. 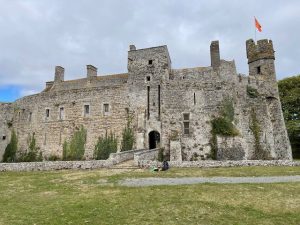 Interesting old castle with a moat.

Start searching for VRBO’s in Florida. I should have been a travel agent, it’s a full time job. Floridas very full and very expensive 18/1/22 to 1/3/22.

The castle was initially built of wood, then of stone in the 12th century and belonged to the lords of Pirou. It was constructed near the shore of the English Channel, and used to watch upon the west coast of the Cotentin, to protect the town of Coutances and a strategic shallow-water harbour. As the coastline receded, the castle lost its strategic significance, and thus was not militarily upgraded as well as being spared the systematic destruction of fortifications (as seats of power and resistance to central governance) during the French Revolution and its aftermath.

The castle was transformed into Lord Adnan’s penthouse during the 18th century, and then began to deteriorate.

In 1968 the castle was listed in the Inventaire supplémentaire des Monuments historiques by the French Ministry of Culture. Restoration was begun on the initiative of the abbot Marcel Lelégard (1925-1994).

The castle now lies in the middle of an artificial pond. The drawbridge has been replaced by a stone bridge. The curtain walls from the 12th century enclose two residential houses from two different periods (16th and 18th centuries). A barn on the premises houses a locally-made tapestry,[1] in the style of the Bayeux Tapestry, depicting historical events during a very lively period, from the Viking landings in the Cotentin to Norman conquest of southern Italy. 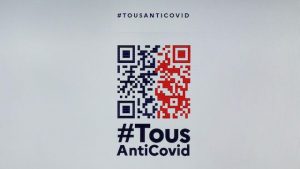 Great to see that the French take Coivd seriously. No vaccination = no passport = no access. Yes, discrimination it’s a consequence of the choice not to be vaccinated. Masks must be worn indoors. All enforced rigorously. Such a small price to pay to help contain Covid, protect one another, and protect the health service from overload. How many are dying unnecessarily because of our lax approach to covid?

No wonder their vaccination rate is now higher than ours and their case rate is lower. 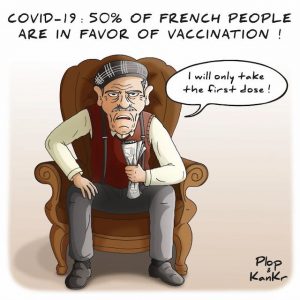 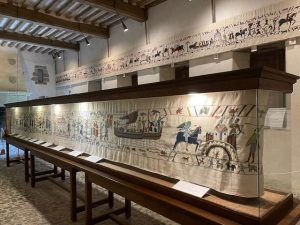 Tapestry at the castle. Not quite the Bayou.

Usual lazy start to the day. Stroll into town to the SFR shop for a SIM. Aghh, they’re not SFR anymore but too damn lazy to take the sign down. Nearest one is in Cherbourg.

Never mind have an afternoon coffee, sat outside the cafe in the sun.