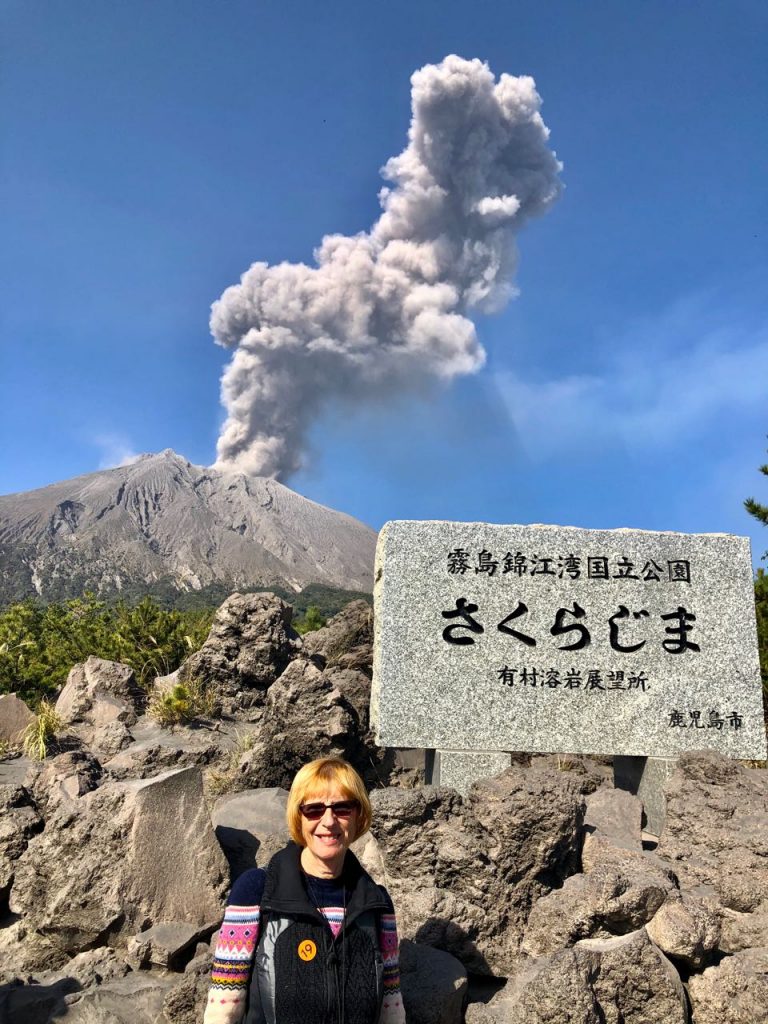 Well today’s sharabang takes us to an Arimura observation platform of an active volcano on Sakurajima. I thought we were going to an observatory at the rim. Turns out we go to an observation platform in the lava field. At least it’s active and get some spectacular photos and video of giant ash clouds spewing out. Sadly no hot lava spewing forth. Every where Is covered in dust. 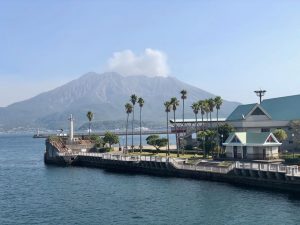 On the ferry to the volcano.

If our squeaky pigeon English tour guide mentions the word samurai or shogun any more I will not be responsible for my actions. Thankfully she is not giggling and so far has resisted serenading us.

Well worth the visit to the volcano just to experience close up the giant ash cloud spewing up. 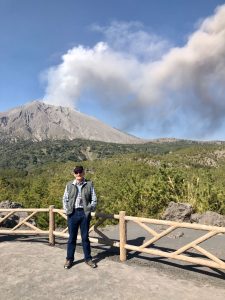 Then we’re off to the Shoko Shuseikan Museum. Quick wander round avoiding the mind numbing detail from our tour guide. Amazing to see some sort of press made by Platt’s in Oldham. Not really worth a visit.

Escape to Sengan-en garden, designed by a Samurai Lord. Now this is more up my street. Quite impressive but alas no Zen garden. Have a coffee and tea in the cafe along with some stoggy rice cake on a stick and some other fried rice cake with black bits in it. Browsing the store is a bit like Costco. Loads of free samples.

In the evening we get landed yet again on a table with the rude bores from Michigan, Groucho and his Russian wife, internet bride I think. Groucho is so boring his mindless monotone monologue will grind you into a coma before he reaches his first full stop.She has all the charm and interpersonal skills of a wild boar with toothache, while he just interrupts and chunners on about nothing in particular. If we encounter them again we’re leaving.

Meet up with our new found friends from LA for drinks and the show. We thought it was a full blown Cirque du Solei. Turns out it’s Duo de Solei, a couple of acrobats. Very agile and impressive. She’s certainly fit, can bend like a pretzel, and is just wearing a provocative costume to help keep the men awake. Any minute now there could be a costume failure. Not quite what we were expecting though. 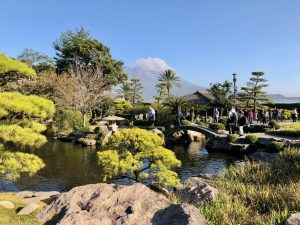 Our first Japanese garden. First of many I hope. Sad!

More delights of the Japanese way of life:

Hotel wifi is 90MB, sort of place you’d have to prize me out of.

Interesting but all our female tour, irrespective of age, seem obsessed with good looking males. Every one of them has weaved some saga on handsome males, into their spiel.

Very aware you’re in a minority, but the Japanese all seem very helpful and don’t resent you. Amazed how many speak English.

A lot of Japanese women seem to shuffle along flat footed. Then you have the pretty youngsters dressed in trendy clothes yet wearing high black Doc Martin style clod hoppers – bizarre.

Haven’t seen any perambulating bin liners with slits in them roving around like Daleks. But you do get the white surgical masks – “what pretty eyes”. The black surgical masks can be a bit more intimidating..

Job creation in Japan beats the USA. For example a car park with hardly any cars yet 7 directing non existent traffic. Lollipop men everywhere waving you to safety with their red light sabres. 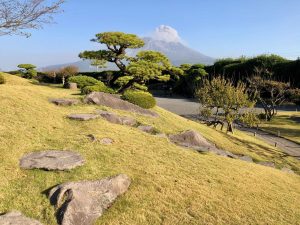 Every time Europeans accommodate Islamic demands to conform to Islamic law, culture, or tradition, a chip of European culture is eroded—there is a bit less democracy, freedom, enlightenment, and Judeo-Christian values.

An old Arabian proverb says: “If the camel gets his nose in the tent, his body will soon follow.”

Europeans are waking up to the new reality. They no longer live in Europe. They live in Eurabia where Muslims are getting the upper hand:

I know it’s a first World problem but why in the name of the FSM have we been inflicted with this need to constantly accept cookie policies every time we go to a web page? Does anyone ever stop and read the inane T&C’s? 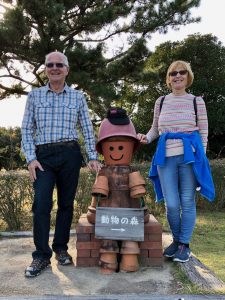 Remember him? Seems he emigrated to Japan. Probably was politically incorrect and offended a bunch of snowflakes.

Try pronouncing that after a few beers.

Yeah, no tours booked today in Fukuoka, so no squeaky pigeon English; no being serenaded by a failed Karaoke entrant; no mention of Samurai or Shoguns; no temples; no shrines.

Lazy morning doing blogs and battling with the internet. My Internet been restored to full LTE capacity. Amazing a few days ago I couldn’t get my iCloud photos to synch and today, because I don’t want to risk busting my so-called UNLIMITED data limit, I just can’t stop the photo’s from synching. 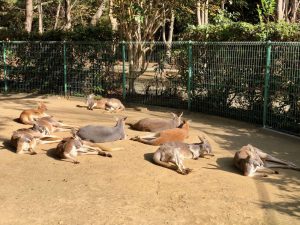 No we’re not in Australia.

Ship docks at lunch time so we meet up with the only Republicans in LA for a ferry ride to Uminonakamichi Seaside Park. It’s like a poor mans Disney, really unspoilt, plenty of open spaces, a small zoo and gardens. After 6 days of Wallace Arnold geriatric tours I’d settle for anything under our own steam. Even a trip to the local re-cycling plant would be welcomed, so low expectations for todays jaunt.

Really pleasant 4 hours just strolling around, enjoying the lovely sunshine and good company. Had a great time. Amazed how relatively easy it all was and how many spoke English. We really should have done more of our own thing, but we’ve got that to look forward to in Tokyo and Kyoto. 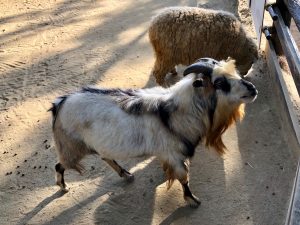 Then it’s the ferry back to the ship and off to dinner, hopefully not with Groucho and his Internet Russian bride. Yeah, no Groucho or rabid plastic recycling greens. And for a perfect end to a great day our Sommelier has finally summoned up a bottle of Carmenera for me. I have to say her and all service is excellent, my glass is never empty. Must have drank the whole bottle.

Cafe for after dinner espresso and then early to bed. So tired I didn’t even manage to finish my Brandy. 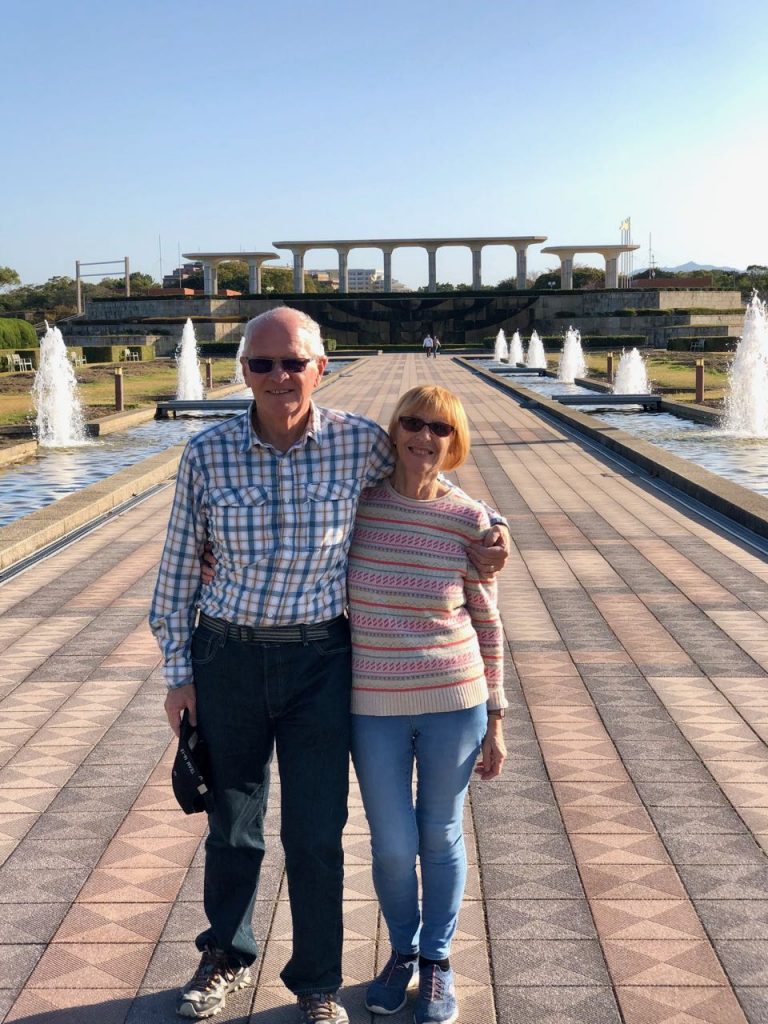 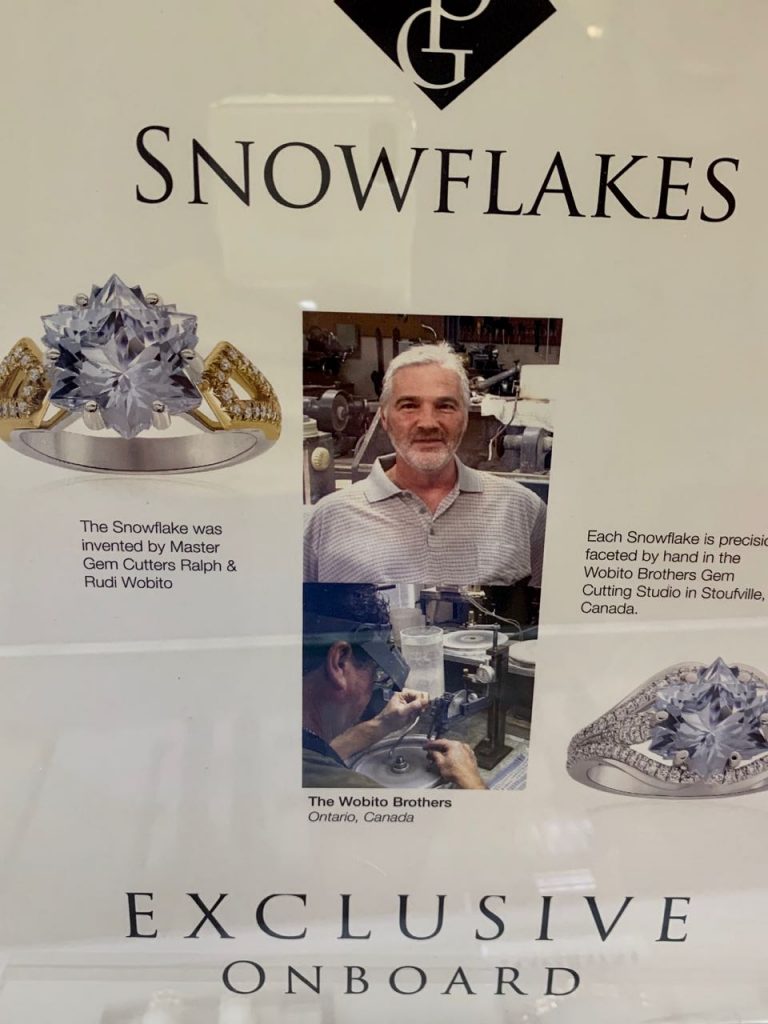 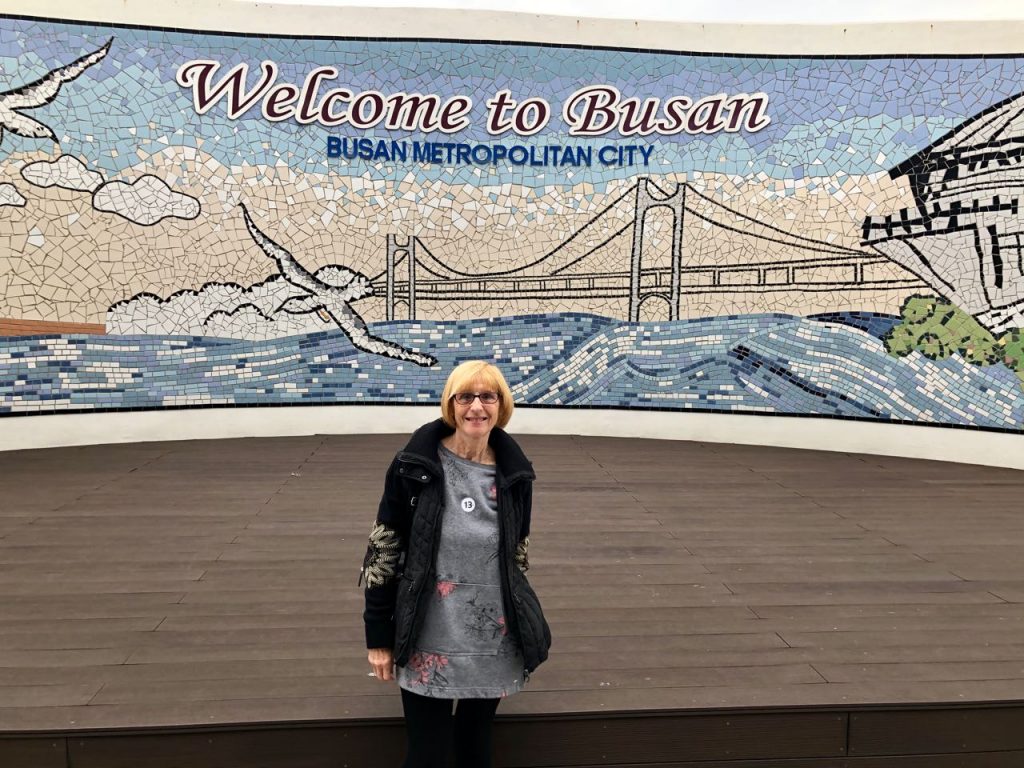 Up and out at the crack of sparrows on a tour to the Orukdo Skywalk. A tad disappointing. Not that long, not that high, so not that scary, and not that spectacular. Some picturesque little islands though. 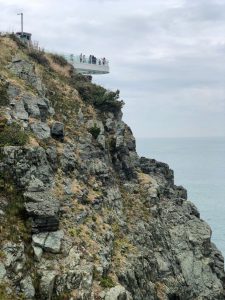 Supposedly a Sky Walk – not very terrifying or impressive.

Then it’s a 50 minute drive to the Tongdosa Budhist Temple. Quite impressive and worth a visit, but very busy.

Buddhism just another one of those wacky religion, but seems relatively harmless. Has some really good common sense beliefs:   Don’t be stupid – well that rules out any politicians
Don’t be angry – does that still apply when dealing with computers or web sites?
Don’t be greedy – again excludes politicians

No Wi-Fi today. How will I survive. Well at least on the coach we’re not serenaded by the tour guide, instead we have our ears battered by the repetitive chants of Buddhist monks. 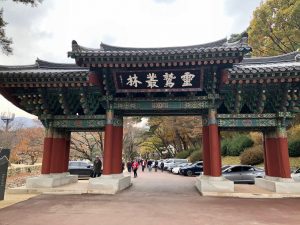 Another Buddhist temple. At least this ones in Korea.

Just have a few minutes on our Lightning schedule for a coffee, plum tea – soo sweet – and Korean walnut cake – with a walnut filling that hot that it clings to the roof of your mouth like napalm.

Back on board ship for lunch. Then around mid afternoon we go to the only Republicans in LA suite for wine and champagne. Sweets are very light and roomy. Now Wendy thinks that is how we should always travel – another great way to fritters away the kids inheritance. 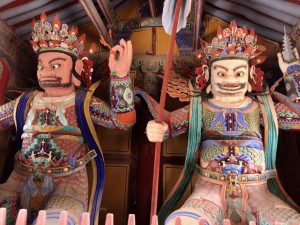 For dinner we manage to avoid Groucho and have a reasonably convivial table of 6.

We were going to go to the show for a snooze but ended up retiring early after a couple of excellent brandies. 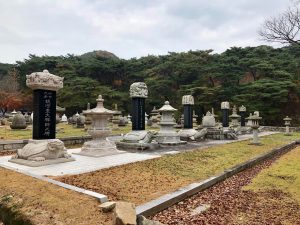 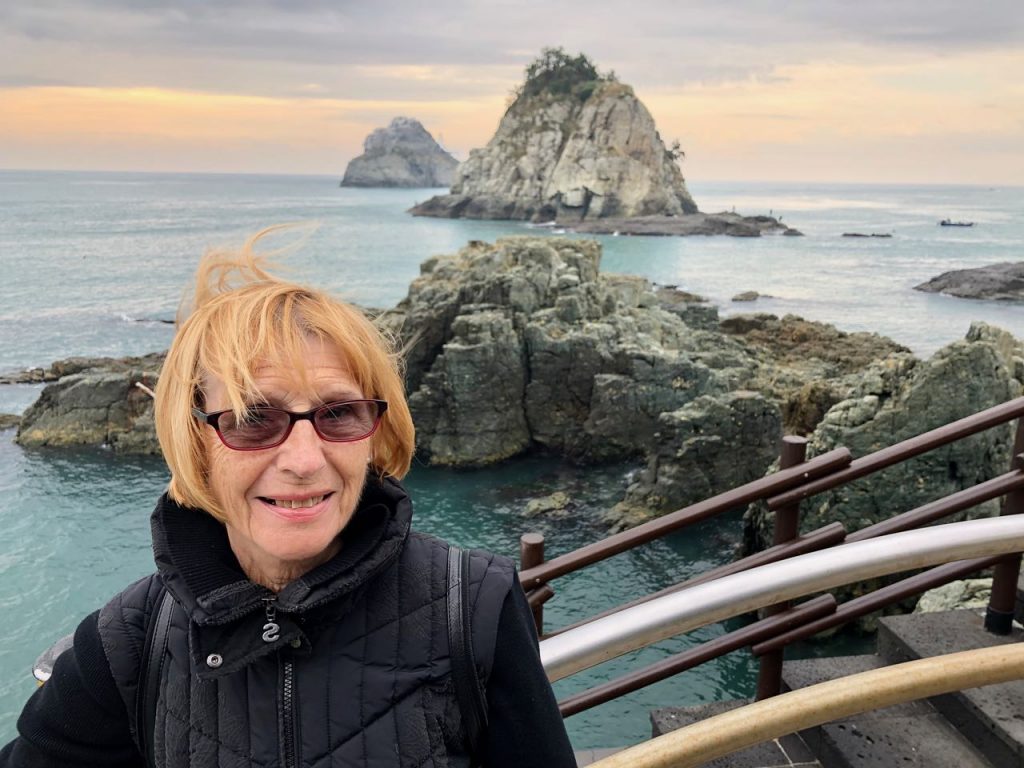 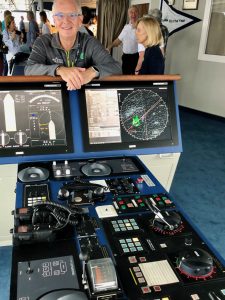 Captains makes his daily 10:00 announcement. I think it’s full of useless information such as precise longitude and latitude, problem is understanding a worda thisa mana saysa. I’m sure we all look forward to his daily pronunciations. He should share a dinner table with Groucho.

Well we’ve not seen any news from the Times or the Wall Street Journal for days now. It’s a bit like being on the dark side of the moon, but I’m certainly not fretting over the news blackout. It’s quite refreshing, although I miss the Internet for fact finding etc. 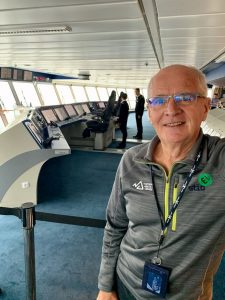 They don’t let you steer.

Lazy day around the ship, no internet and very little in the way of stimulating things to do or lectures.

End up going on a free Bridge tour courtesy of Phil as they have two free tours but Kim is not interested. Very interesting. That desperate we even end up going to a Trivia quiz.

In the evening we go with Phil and Kim to the Tuscany restaurant, one of the speciality, empty my wallet restaurants. Have to say the meal was excellent, Parmiani, lobster and superb steak. I’d certainly do that again

Then for entertainment we all do a His and Hers quiz. The men win.

Just remember The glass is neither half-full nor half-empty: it’s twice as big as it needs to be.
This entry was posted in Uncategorized. Bookmark the permalink.