Drive to Brett’s
Set off down to Ascot to stay at Bretts overnight.

Only an 8 minute delay, no real hold up. Have I been teleported into some alternate parallel universe? Am I still in Britain?

I suffered with the squitters and was shouting for Huey and Ruth last night, but bizarrely saw no diced carrots. Today is 24 hours starvation. This is what happen when you have little grandchildren milling around. They’re just walking germ factories. Mind you 3 days with no alcohol is probably also a major factor. 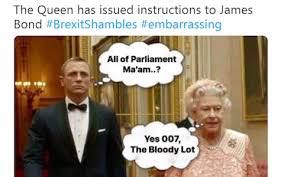 Oh yes please. Let’s have a grand clear out. Guy Fawkes had the right idea.

Heathrow off to the Land of the Rising Sun
After a good nights sleep I’m feeling better, but still going to keep off food and alcohol for another 24 hours.

Brett runs us to the airport.

We’re flying from Heathrow terminal 5 and I have to say the check in and security screening is some of the slickest I’ve experienced, even though they had to pat me down.

BA flight in Premium Economy is pretty comfortable but 11 hours with no food or booze is purgatory. To make it even more dire the choice of films has obviously been made by an escaped Chinese paedophile. Fortunately manage to get some sleep. 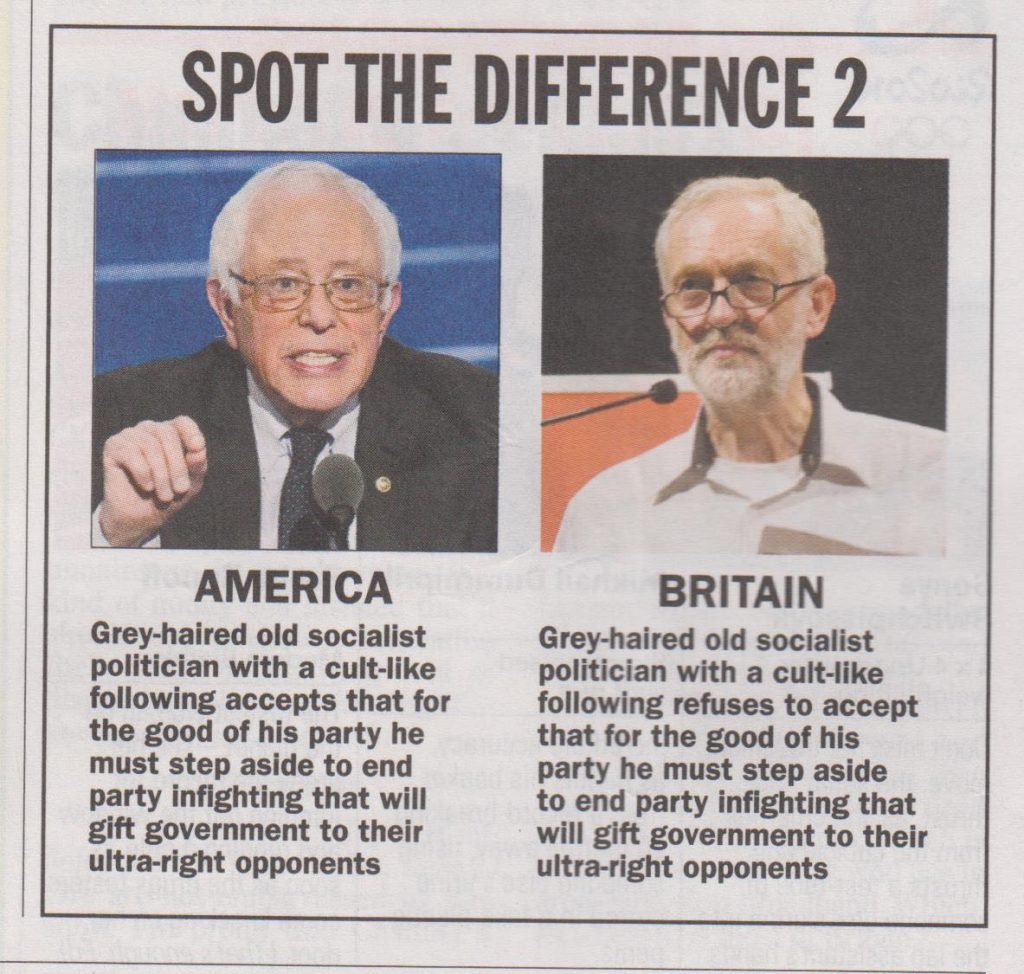 Stupidity Today – I decide to be a paragon of high tech devotion by checking in online, even using the boarding card via my iPhone and thereby do my bit for the planet, saving a whole oak tree. Guess what the idiot machine doesn’t work. Common problem says the very helpful assistant “you just have to enlarge the bar code”.

I’m sure by now you know my retort “well why don’t they send it ready enlarged one the email?”. 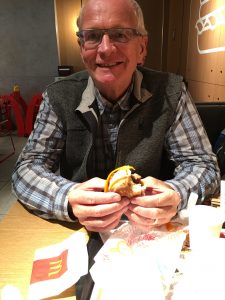 I’m ashamed. All this awesome looking food and I resort to this. Not my usual approach to foreign travel.
I’ll try anything once, but my head in a toilet bowl has temporarily limited my horizons.

Arrive at Haneda airport in Tokyo 20 minutes in early. Despite having split our clothes across two suitcases in case BA loose a bag – they do tend to excel at loosing bags – both bags arrive. Customs and immigration is one of the slickest ever accounted. So fast that then we have to wait nearly 20 minutes for our luggage. 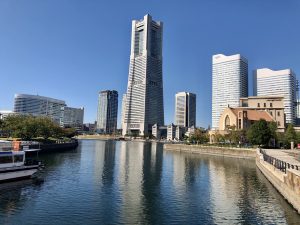 Our hotel. It’s the tallest one.

Pick up my unlimited data SIM from the arrivals hall and went over to the desk to buy a No 8 bus ticket to the Hotel – all pretty efficient. Saves £60 on a taxi. Bus arrives on time and sets off at 08:40 precisely, not at 1 second before, not even 1 second late, but spot on 08:40. Just one of the many awesome features of Japan. 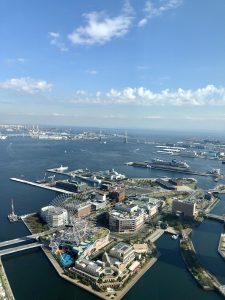 Drive into Yokohama was interesting pass through all the new industries and then you pass the old rusty, decaying and obsolete smoke stack industries.

Bus arrives at the hotel ahead of time. It’s the Yokohama Royal park hotel 5 star, the tallest building in Yokohama. Fastest lift in the world. 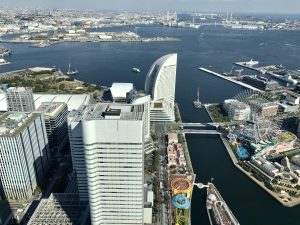 I passed on the breakfast on the plane – full English no less, and it looked pretty good – as part of my starvation, but now it’s time for some food. I think perhaps I’m pregnant as I have a real yearning for a MacDonald Egg MacMuffin.

Not exactly a recommended light meal to recover from a failed attempt by Wendy to poison me, but it’s what I want. 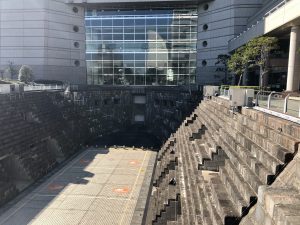 Old dry dock in front of the hotel- now a feature.

Within 4 minutes from the hotel we’ve found a Macad’s. It goes down a treat and is served on a tasty sweet bun. 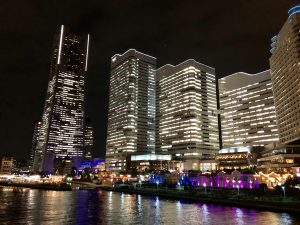 Night time view of the hotel. Bugger me we’ve left our bedroom light on!

By now it’s only 10:00 and the room’s not ready but for an extortionate fee they can somehow miraculously summon up a room for us. You’d think for the price that this hotel is extorting they could be a tad more accommodating. We’re pretty tired so stump up the extra – it’s just the kids inheritance anyway.

Have a well deserved 3 hour nap – I know a violation of my 3rd law of retirement. 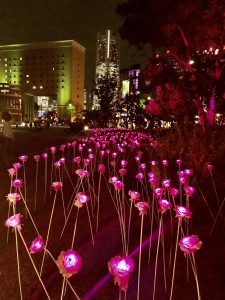 Yokohama – awesome, rad, gnarly – civilisation on steroids, this is how it should be done. After this no chance I’ll ever go to some 3rd world cesspit.

Pictures give the awesome views day and night from our room. It’s the tallest tower in Yokohama and we’re on the 62nd floor. Needless to say Wendy overcame her fear of lifts. Fastest lift in the World apparently.

No litter, graffiti or dog muck, mind you not seen any dogs yet. 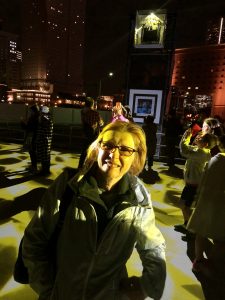 Laser light, music and public frolicking in the park.

Just love the smiling, bowing and politeness. Expected it to be obsequis and sickening, but no it’s pleasant and reminds you to smile. Really love the way they hand everything over to you with a slight bow and double handed . 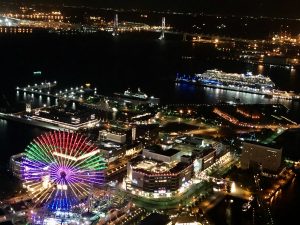 Realised that even in Japan in a 5 star we wouldn’t be sleeping on the floor but did expect a brick for a pillow. Instead it was the softest pillow – and I like soft pillows – I’d ever encountered, no need to drill a hole or channel to fit my ears in.

Oh so civilised just need to sort language, mind you to be fair most speak English, even in MacD’s. 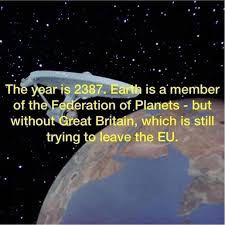 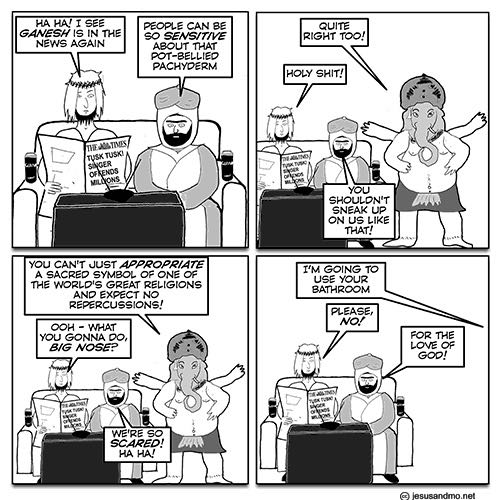 Yokohama to board cruise 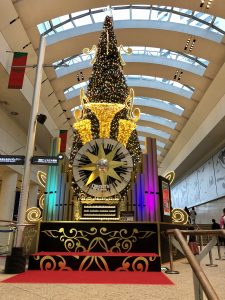 Oh no not another shopping mall and all ready for Christmas, don’t you know.

Good early breakfast. Mainly Western with some tempting tastes of the orient. See the Japanese Monks eating salted plums so give them a try. Must be some sort of punishment for their sins, the worst taste ever, I’d rather chomp on nettles.

Hotel Wi-fi was a blistering 90mb. I think I must have died and gone to Flying Spaghetti Monster 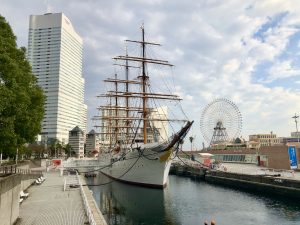 Old sail boat outside our hotel. Thank the FSM we’re not travelling on it.

Have a stroll to try and buy a few essential for the cruise. Then get a taxi to the Celebrity Millennium. Lightning quick and efficient check in. Amazed and impressed, a very rare occurrence for me these days.

Champagne to greet us. How am I going to cope with 24*7 free drinks? 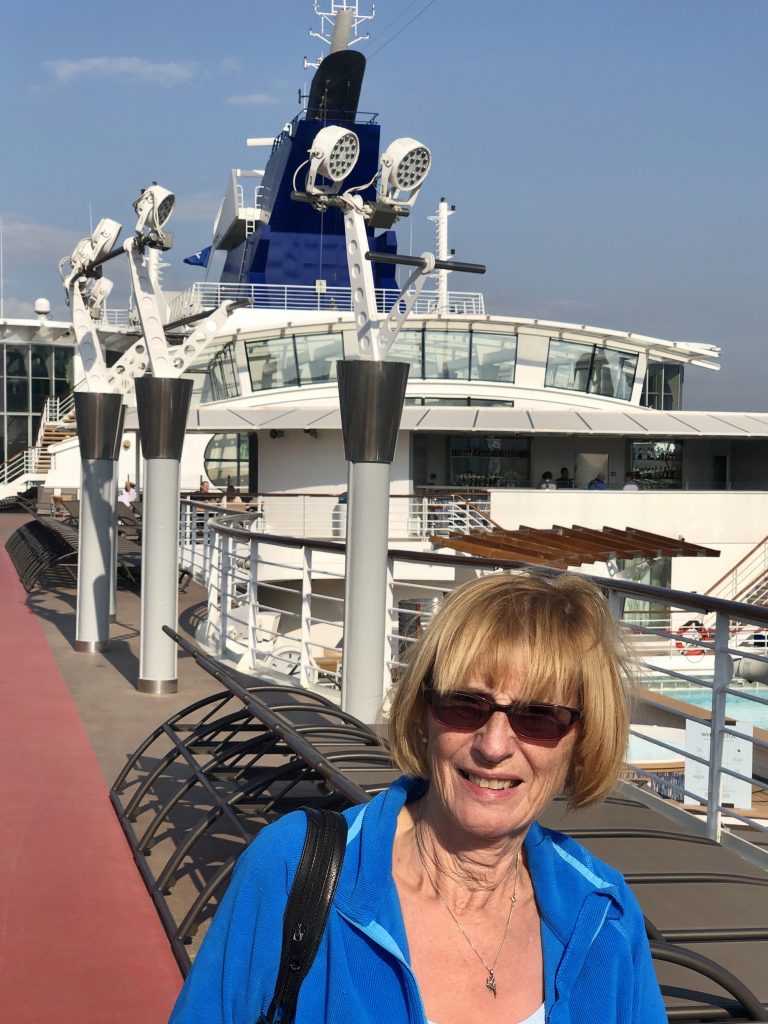 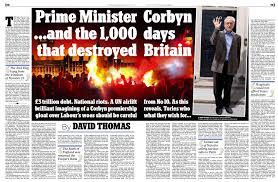 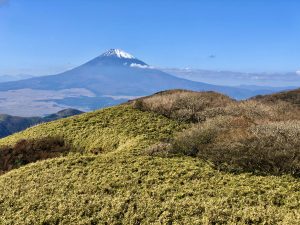 Dinner last night was on a table for 6. Ok but not really a very stimulating bunch. At least they all spoke English. Free drinks package was good though, the wine flowed freely, topped up regularly by the Eastern European surly sommelier. Even had to refuse the last top up.

After a great breakfast we dash off on our first Wallace Arnold tour for geraitrics, mentally infirm and weak bladdered moaners. Our tour guide is a giggly, squeaky and singing Japanese lady who is chronically suffering from a severe dose of verbal diarrhoea. Absolute nightmare would be waking up with her screeching away on your pillow. But to be fair she did keep us entertained and she did epitomise my expectations of Japanese womanhood. 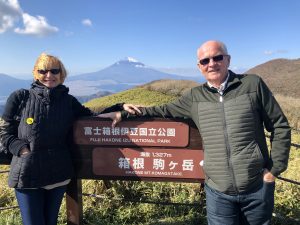 Mount Fuji backdrop. Yes, it is the real Mount Fuji in the background.

Two hour coach tour; then a pirate ship across a lake; followed by 30 minute queue to catch a cable car up to the top of Mount Hakone to view Mount Fuji. Great photo opportunity. We were really lucky with gorgeous sunshine and a clear view of Fuji, it can be covered in clouds 50% of the time. Then a pewk invoking one hour drive across the mountains. Just about survived without calling out for Huey and Ruth again. Two hours later we’re we warily board our floating gin palace. Was it all worth it?

Met an interesting American couple. Must be the only Republicans in Los Angeles, good to know there are at least two.

Greeted at the port by a Japanese drum band, big, big drums, followed by a brass band.

Back on board we have speciality afternoon tea in one of the lounges, serenaded by guitars and a singer.

Dinner is again on a table for 6. Not a really exciting menu but food was good. Company left a bit to be desired, spoilt by southern softie snobs from oxford – majestic centre of the known universe, don’t you know. Really do prefer avoiding Brits at dinner, American’s or Canadian’s are much better dinner companions. Sad isn’t it. 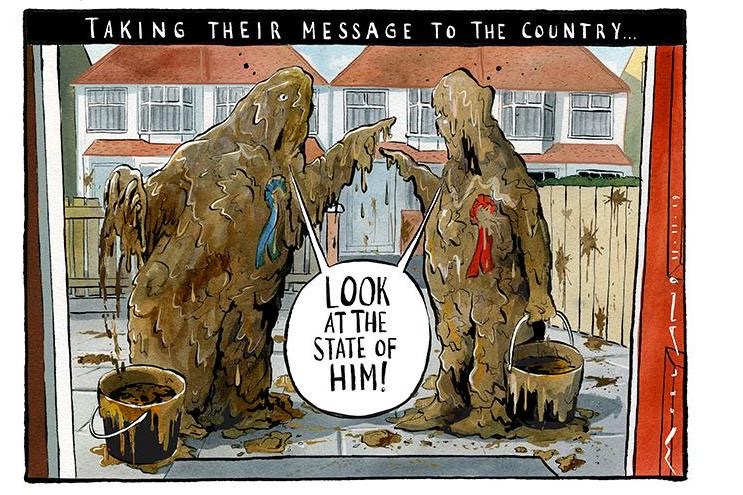 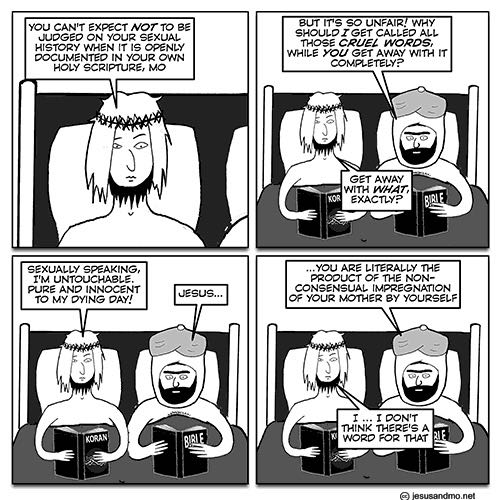 Equity has passed a motion that the phrase ‘Ladies & Gentlemen ‘ should not be used in theatres so as not to offend those who do not see themselves as either.

Perhaps we should adopt another activity recommended by the students at Oxford University, just a bunch of PC snowflakes, and greet the end of a theatre performance with ‘Jazz Hands’. I wonder how the praise-needy egos of the average bunch of luvvies would cope with complete (non threatening) silence.