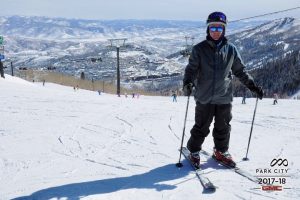 Another sunny day here in paradise and good snow. It’s my day to lead a ski group. Just 6 of us today. Ski until 13:00 and then it’s back home for me. Colder

Pass on Tipsy Tuesday daytime drinking. Instead go home and do some consultancy work on my CCTV checking software. Sadly I don’t really have the enthusiasm for it, but get started on it. After all it helps pay for the skiing.

In the evening we’ve been invited for dinner at Laurie and Mike. Don’t know them from Adam, they’re neighbours, Laurie popped round the other day and invited us. How friendly and typically American is that – no wonder we need a social secretary out here. Bloody hell we’ve lived in the same house in Belthorn for 40+ years and don’t think we’ve ever been to dinner with any of our neighbours – typically British. Have a greta evening with good company, food and wine. 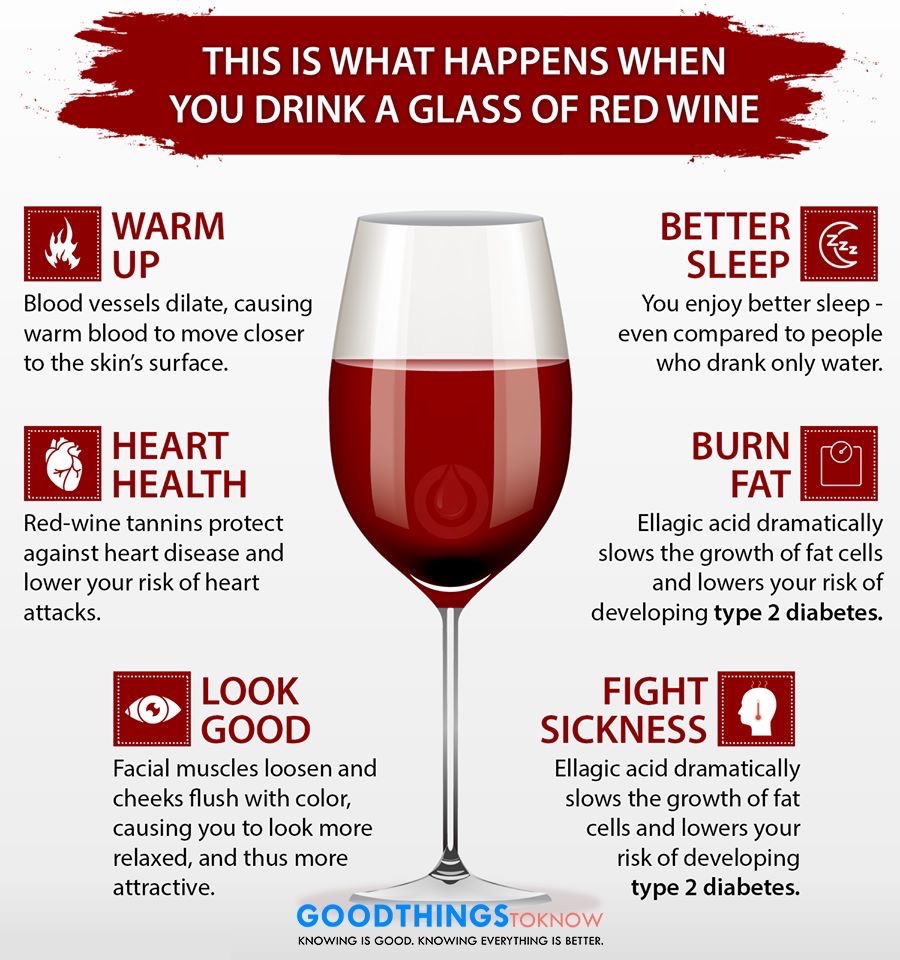 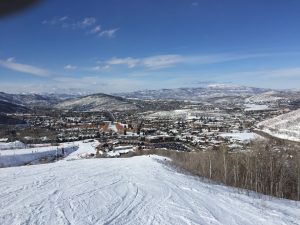 Skiing on my own in the morning. It was forecast to be cold again – started off at 0 degrees, doesn’t sound too bad until you realise it was 0 Fahrenheit – thankfully it was sunny so not quite as cold as yesterday. Definitely a long john day though.

In the afternoon Bob and I toddle off to the gun range to perforated some cardboard. Have a choice of Bob’s 9mm automatic and his revolver. Pleased with my groupings, especially seem to do better on the big targets – perverse. You can tell we’re getting cocky as we move targets out to 30 feet.

Bob stays for dinner as he’s in bachelor mode this week. 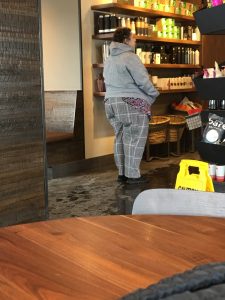 Blobby in pyjamas at Starbucks.

Obviously escaped from Walmart and not only too bone idle to get dressed but also needs to park in a disabled slot to avoid having to walk an extra 10 feet. Good to see America has it’s fair share of lazy disabled imposters. 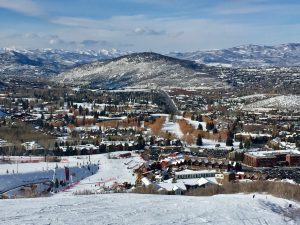 Lazy morning and out on the slopes for 11:00. Ski and coffee until about 15:00. Queues aren’t too bad but the slopes are oh so busy. Snowing on and off all day.

Then it’s off to the quiz. Great they have a British question round. Sadly it’s all on the Royal Family – I wish the Americans would get their own King and then at least they’d stop obsessing about ours. If I had a dollar for every time I’ve been asked will Charles ever be King, I’d be able to afford a place on Park Meadows. The latest, from the American conspiracy brigade, “was Mrs Simpson really a man?” No, and the CIA were not responsible for 911 and Aliens have not captured Elvis. Thankfully, even though they were Royal questions, we got all that round right, or else I don’t think we’d have been able to live it down.

Try some of the more pricey High West whiskies. You certainly get what you pay for.

Wendy’s managed to get a snow scraper from darling Darlene at the local Hertz. Trying to scrape off 14″of snow with a 4″ scraper is no fun.

Dinner in, on our own tonight for a change.

Don’t you just love to see women in the restaurant at lunch time, steam coming from their stark naked feet, and then picking their feet, like a demented unemployed chiropodist. Thankfully they resisted, way too fat, putting their feet in their mouths to bite their toenails. Just what you need to put you off your $30 cholesterol special burger and chips.

3″ new snow overnight and it’s snowing on and off all day.

Go bowling with the Newcomers club. What an abysmal performance on my part. I blame it on the noise from the club. Tenpin bowling in America is a real ear opener; plenty of noise; congratulations; high fives; screams of surprise or anguish. Different from the quiet reserve of English tenpin bowling. Think the American version more fun – especially if you have ear defenders.

Then I have to go wine and whisky shopping. Incredible as it may sound it so much more fun driving and shopping in a snow storm and Park City is so pleasant. Sadly can’t buy any Yipee Ki-yay. Seems it’s a summer whisky.

In the evening we’re off to the PCMSC bash and AGM. Great barbecue ribs and chicken, along with starter and apple crumble, of course with lashing of cholesterol (Cream – looked plastic to me). Good evening although oh so noisy.

You know when the countries gone to the dogs when the bartender (she) says “would you like a straw with your whisky”. She must have thought I was some sort of alcoholic. After I said “you have to be joking”, no apparently a lot of people do – perverts.

I don’t believe it. 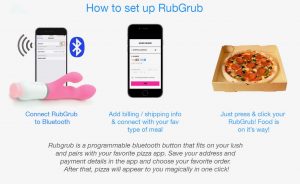 Why create such a toss pot crazy product? Because they can. Who in their right mind will buy it?

120 decibel the real outcry in Germany: 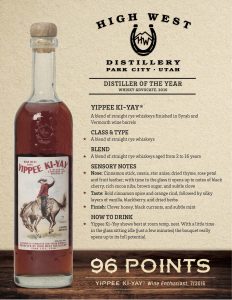 Awesome Rye Whisky. But no bottles available now as it’s a Summer whisky.

No skiing today it’s just too busy on a normal Saturday, never mind a Presidents week one. Off classic cross country skiing with Helen – only her second time. Certainly gets the old ticker going faster than a Jack rabbit on moonshine. Good aerobic exercise. Makes me hotter than a computer trying to divide by zero. Downhill skiing is so much easier.

Meet Wendy at the coffee shop, then it’s off down to George and Helens to try and fix their TV remote, oh and also a iPhone bluetooth connection. I think the manual for the remote must have been written by a dyslexic Chinese nerd. End up having to reset it and teaching it button by button. Would have been easier for a retarded chimp to have learnt the controls than that remote. But remember “nil carbon illigitmus” and “if at first you don’t succeed swear and give up”. Helen and Wendy seem to have lost the will to live and toddle off to the supermarket. Any excuse for their weekly merchandising fix.

Finally get the basics working which is more than I can say for my encounter with the Evil Empire (Microsoft) and iPhone blue.

Why is islam, jihad and sharia a threat to women

Islam is a threat to women, because Islamic teachings allow for the beating of women “from whom you fear disobedience,” as well as the downgrading of a woman’s testimony and inheritance rights. The Qur’an sanctions polygamy, child marriage, and even the sexual enslavement of captive non-Muslim women. These are not just teachings that “Islamophobes” have discovered in dusty corners of the Islamic holy book that no Muslim today takes seriously; women face all kinds of oppression throughout the Islamic world that the oppressors directly justify by reference to Islam. 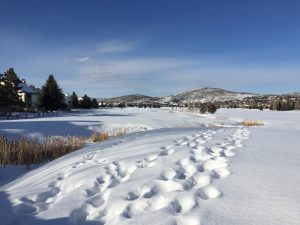 In the afternoon we go to an Apres Ski party at Jeri and Robs. Wow they have an awesome collection of Indian art from pottery, to woven basket and masks.

Quiet evening as we have to stay up until midnight’ish to pick Anna and Leon up at the airport. Amazing isn’t it these airports have park and wait areas with information boards that tell you when flight is en-route or ready to pick up passengers. How neat and clever is that and then they go and spoil it all with the usual stupidity and lack of common sense. At midnight all the flights that are due to arrive that day drop off the board even if they’re still en-route or not yet ready for pickup. Never underestimate the power of human stupidity. 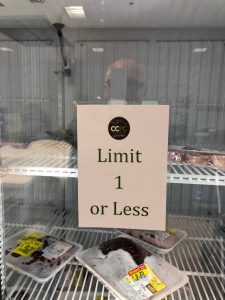 They obviously have a problem with people taking more than none of their fair share, so they run out.

Up to PCMR base with Anna and Leon. They pick up their skis and boots and then we head off and do a few runs. We meet Wendy for brown bag butties in the Legacy Lodge.

After lunch Wendy and I tootle off to the library and then walk home. I leave Anna and Leon to get some skiing in.

In the evening we’re all off down to the bowling alley with a load of friends, including Hal and Angela, for a couple of games followed by dinner at the Full House restaurant. A fun evening had by all.

Don’t I just love the bat shit crazy drink laws foisted on Utah by the Mormons – yet another good reason to keep religion locked in a darker cupboard never to see the light of day or inflict senseless, archaic rules on the rest of us.

In the bowling alley you can either order drink at the lane, in which case you have to buy some food, or you can go to the bar and order a drink without having to swell the ranks of the obese by having to buy food. Bar service sounds good until you learn that the waitress is the only person in the Mormon universe that is allowed to carry your drink to the table. Pots for rags.

I wouldn’t mind but if you look at the list of items every Mormon should have in their wagon for the long trek out to Salt Lake, they included sensible items like whisky and coffee. What’s gone wrong?