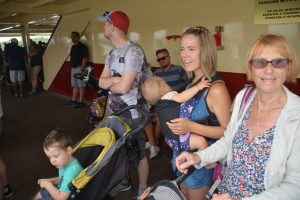 On our way back to the Magic Kingdom.

After our weeks Disney cruise we now have a week left of Disney park tickets. Oh joy more fun.

Up early and out to the Magic Kingdom. Big mistake choosing this park today. There was a 06:00 marathon and they’re filming their Disney advert. The place is rammed. 140 minutes is the record wait time. Just an indication of the greed, money for old rope. How can they fail to make money?

At least we have some Fast passes so get on the best rides apart from the Seven Dwarfs. Starbucks are just beyond hope, more customers than Muslims around the Kaba at Ramadan. Stuff them. Good day despite the crowds and managed to do some of the older rides and the train, still great rides for younger kids. Thankfully we missed It’s A Small World. At least we were not too late leaving – learning some common sense. 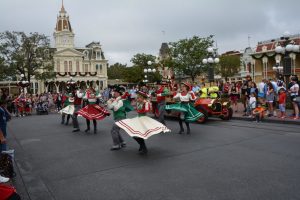 Despite the queues the things we really love about Disney are:

1 No selfie sticks waving around to poke your eye out.

3 No chewing gum mountains to climb on the pavements. 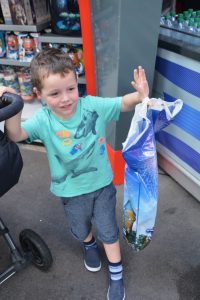 Oh the excitement of a Mr Potato Head.

Q. What do a Rubix cube and a penis have in common?
A. The longer you play with them, the harder they get.

Q. What did the elephant say to the naked man?
A. “How do you breath through something so small?”

Q. What’s worse than getting raped by Jack the Ripper?
A. Getting fingered by Captain Hook. 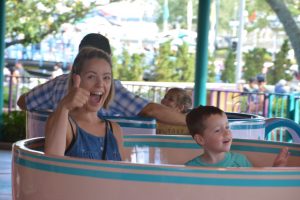 Only Fiona and Kasper have the stomach for this kids ride.

Security is the usual joke. No profiling. Let’s select Fiona with a baby in arms, but don’t let’s bother looking near her boobs. Oh and while we’re at it what about that 68 year old grandmother from belthorn. Never mind them young men with beards, or them middle eastern geezers. When will we learn.

Security and TSA a whole industry with massive inconvenience and yet in trials only 10% effective. For the supposed greatest nation on Earth, all caused by a barbaric 6th century rag head living in a cave in Afghanistan, you would think they’d be humbled and hang their head in shame, but as arrogant and as ever.

There has to be a better solution. Could this be the future solution https://www.technologyreview.com/s/602737/ai-body-scanners-could-solve-the-worst-thing-about-airports/ – watch this space. 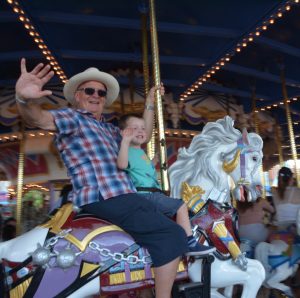 All the fun of the fair on the more traditional ride.

Take a guess as to which store in the whole of the Florida Mall is rammed full to the gunnels? Well it’s not Victorias secrets or Bose. Yes, it’s the nerds store, Apple. The Microsoft store is next door, probably hoping for some passing trade to rub off. No chance. It’s empty.

Then it’s Hollywood studios again today. Catch most of the good rides with Fast pass, including Toy story which is as good, if not better than, Buzz Light Year. Jasper goes on Tower Of Terror but does not enjoy it and is frightened. 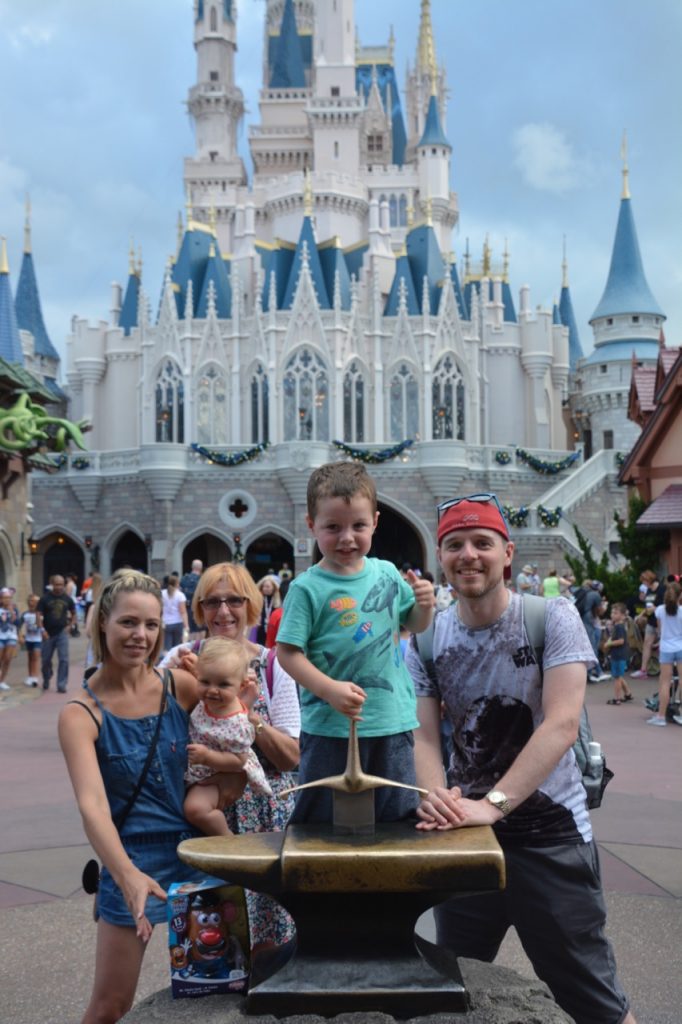 See if you can pull that out.

We were thinking of staying for Fantasmic but chicken out. It’s just too late for the kids, never mind the adults. Have tea back at home, fortunately I have my Spicy Italian Subway, with an excess of jalapeños, so tomorrow no doubt my arse will be on fire.

Hal,Carol and Angela arrive to stay with us for a few days. 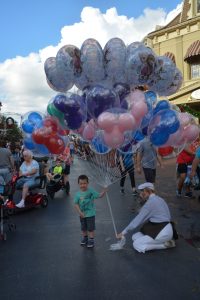 Hang onto him before he takes off.

Christmas – better be careful using that word I’ll have the PC thought police after me – comes early here at Disney. Only the 6th November and the greedy gnomes on the 96th floor are either devout Christian religious fruitcakes or are out to extract every last cent from the muppets they call customers.

They must be salivating with glee and expectation over their gargantuan bonuses, as all those muppets come storming in, just more dollars on legs. A money machine. If they can’t make a profit with these volumes then time to give up and open a luminous ink tattoo parlour in Jamaica. 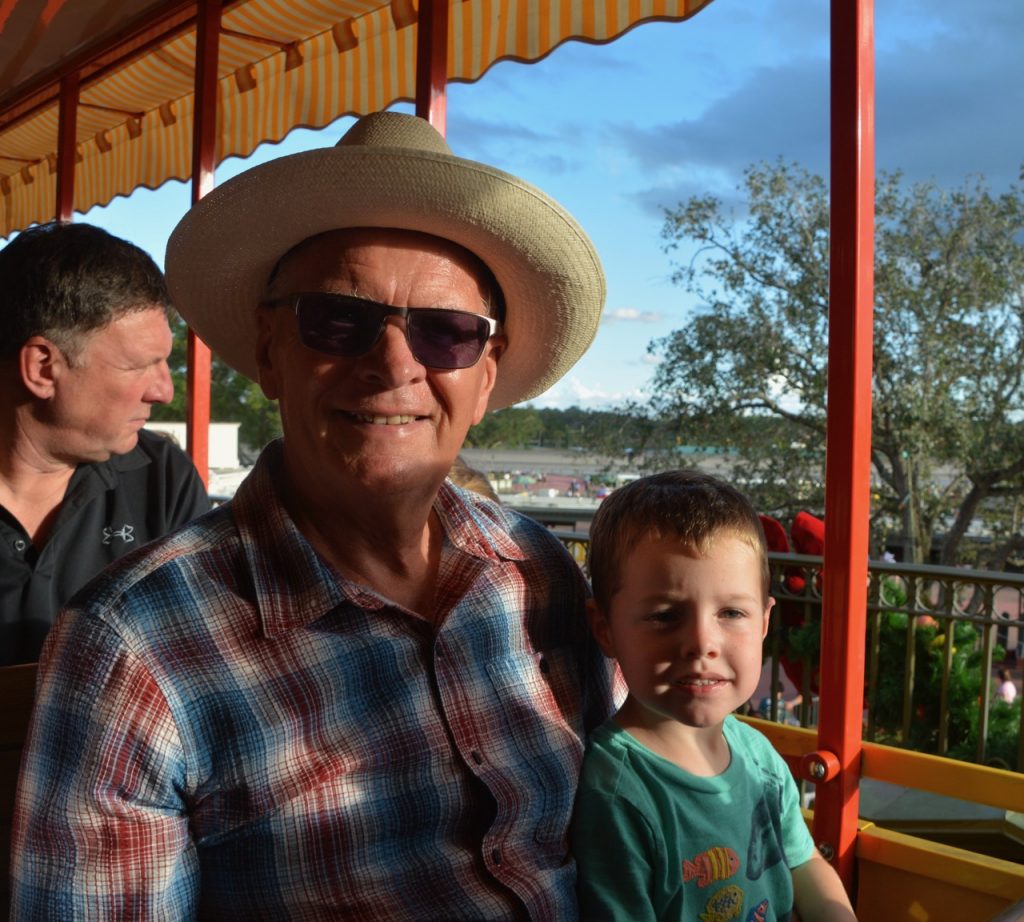 Jasper and Angela enjoy the pool with Kurt. 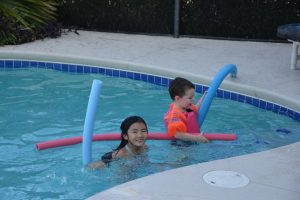 Cool down in the pool

Lazy morning then we’re off to Epcot for the afternoon. My god it’s hotter than the hinges of hell and sweatier than a Water Hoggs backside. 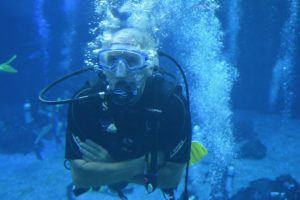 I do yet another dive with Disney Quest in their giant Aquarium. Great dive, just 25 feet deep, warm with plenty of pretty fish and fake coral – can you believe it Disney use the fake stuff. My sort of dive these days and helps me keep my hand in at diving. As usual my ears feel like they’re going to implode and no doubt I’ll be deaf for a week. Some amazing sharks, complete with mangy teeth; colourful sting rays; giant turtles, two of which start kissing one another just in front of me – fortunately they remember it’s Disney and resist having it off. Get to do a high five with Jasper who cutely blows me kisses through the glass wall. 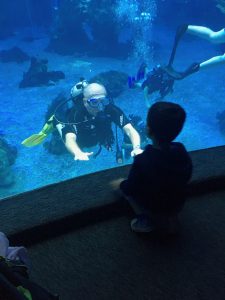 Jasper gives me a high five.

Then in the evening we have a makeshift meal, on the pavement, whilst waiting for the firework and light display. Very impressive, the display that is, as always.

A late night but fortunately traffic clears quickly. If this was in the UK it’d take at least a day to clear those crowd, people would die of old age in the process 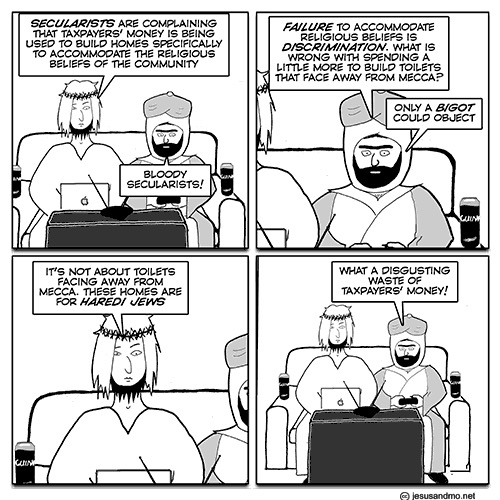 The Truth About Islamophobia
Wednesday – hot and sunny. 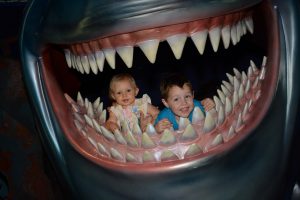 Drop Kurt and Fiona off at Disney Springs, formerly Downtown Disney, no doubt some bright spark on the 94th floor of the Disney marketing building thought it would be a wonderful idea to change the name. It almost certainly cost a fortune, I doubt it has had a measured or measurable benefit, and I doubt whether the dickhead responsible has been given a brown envelope and escorted off the premises.

Wendy and I get to take Jasper to Epcot for the morning. As usual his behaviour is impeccable and we have a great morning together doing some of the less popular activities at Epcot. Including a light lab where he gets to mix colours and gets to learn that red, green and blue, the additive primary colours, makes white. 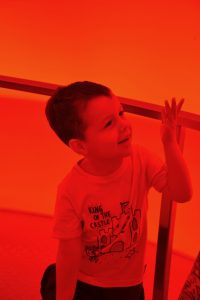 Amazing 3D animation from Disney and Pixar. Mind blowing. That good I even watched it twice.

Kurt and Fiona meet up with us for lunch.

So hot again. We start to have a wander around the Lands but give up as it’s just too hot.

Set off back home so Wendy and Fiona can go to Walmart – you’d have thought they’d have put their slippers and pyjamas on to fit in with the clientele and for such an auspicious outing. Kurt and I are left looking after the kids. Jasper and I have a whale of a time in the pool.

In the evening we have some wine and Dark and Stormy cocktails. 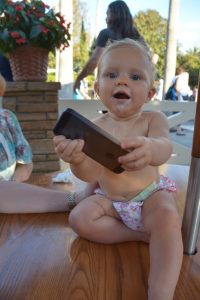 Q. What did the two lesbian frogs say to each other?
A. WE DO TASTE LIKE CHICKEN!

Q. What would happen if the Pilgrims had killed cats instead of turkeys?
A. We’d eat pussy every Thanksgiving.

Q. What’s the difference between love and herpes?
A. Love doesn’t last forever. 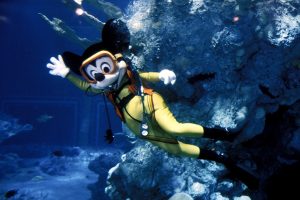 He didn’t come on our dive.

Disney seem to have perfected queues from hell. And Starbucks join in the fun game of piss off the customer with long queues. I’d rather go suck pond water through a straw.

Meanwhile Mexicans and drug barons don’t seem to grasp the concept of a queue, think they must have some German genes in their makeup.

Then we have the ultimate in we don’t care, f..k the customer / muppets, with Mobile food ordering only. No mobile, then you starve. 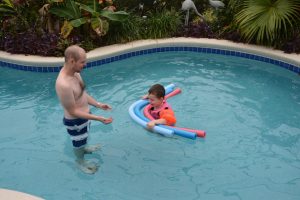 Fiona’s off to her theme park today with a trip to the Outlet Stores. No trip to America would be worthwhile without such a 3 hour retail therapy session. It’s Starbucks for me.

Then sadly we drop them off at the airport, complete with more luggage than a travelling circus act. Say our good byes. We’ve had an awesome time with our kids and grandkids, we’ll miss them and will be rattling around in our awesome 4 bedroomed Orlando home for the next 16 days.

Well it’s been an awesome holiday with kids and grand kids. Love them all but driving with a screaming grandkids can fray your nerves to shreds. Best holiday ever.

In the evening we have a lazy, booze free evening, and catch up on Blue Planet and the Gunpowder series. 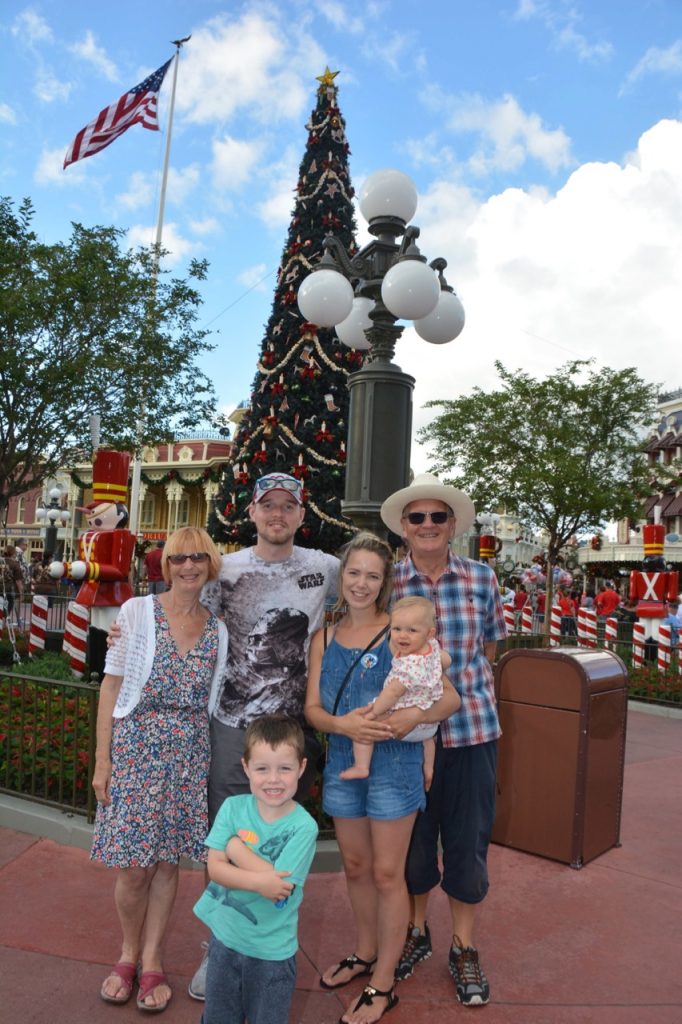 Are the Disney parks some sort of adipose tissue magnet. Or is there some sort of blobby causing virus in the air around here. You just can’t move for fat guts, to say nothing of the giant boobs. You have to take care one doesn’t swing round and wipe you out with an adipose tissue sideswipe.
Friday – hot and sunny. 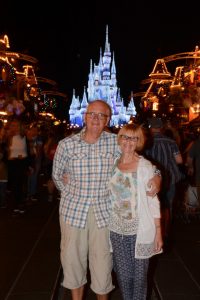 Magic Kingdom on our own.

Hal and co depart for Charlestone. So now it’s just the two of us, peace, quiet and tranquility. Time to catch up on three weeks worth of blogs, get some reading in, sort through thousands of photos and whittle them down to manageable numbers ready for a holiday album and hopefully get some reading in.

We’ve still got 3 days of Disney Park passes left so after a lazy day, we set off for the Magic Kingdom Fireworks. Arrive about 17:50, wow it’s really busy. Car park attendant asks us if we’re here for the party. “No, what party?” Park close at 18:00, no fireworks, it’s party night and yes you guessed it, it’s extra admission fee. Turn round and go home. Teach me a valuable lesson – knowledge is not just power but essential – in future check the calendar.

Never mind finish off watching Gunpowder, some TV all washed down with a very tasty Merlot. 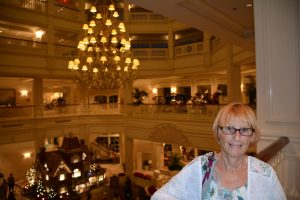 Civilisation at the Grand Floridian.

Q. How do you make your girlfriend scream while you’re having sex?
A. Phone her and tell her.

Q. What do you call kids born in whorehouses?
A. Brothel sprouts.

Q. So how is your marriage with Miss Right?
A. I didn’t know her first name was “Always.”

Q. Why is psychoanalysis quicker for men than for women?
A. When it’s time to go back to his childhood, he’s already there.

Optional security. Yes its a new concept bought to you by Disney. They’ve tried random selection. Doubt it they’ve ever had the gonads to use common sense and profile, so now they must be trying the latest in ineffectiveness and waste. If you don’t fancy it just walk around the body scanners.
Saturday – hot and sunny. 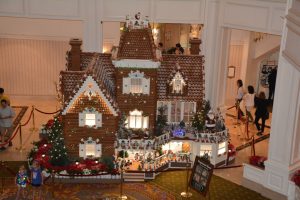 Lazy morning and then in the afternoon we set off for the Magic Kingdom again. Too busy to get on any ride. Not queueing 60 minutes.

Have evening dinner at the Grand Floridian, all very elegant and civilised. Then back to the park for the laser, light and fireworks. It’s an hour before they’re due to start yet everywhere is already rammed.

We stand, sit and wait for 50 minutes. Can’t believe it. But have to admit it was spectacular, almost worth it. After this every firework display is going to seem insipid.

Happily Ever After media, laser and firework display:

Then this was followed by Once Upon A Time laser show at Magic Kingdom: 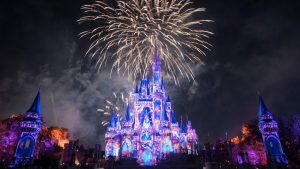 Really need to learn to cope with the scrots of the World. Those who park in disabled or Mums and Baby slots; spit chewing gum out; abuse queues; throw fag packets out the car; and in Disney climb over fences, trample plants just to save them going around the exit. Need to just ride the wave of life rather than speaking out. Why bother you’ll never change them. The world would be such a better place without them but that’s life.

“If you don’t like something, change it.  If you can’t change it, change your attitude.  Don’t complain.”
Maya Angelou

Radical Islam: The Most Dangerous Ideology: 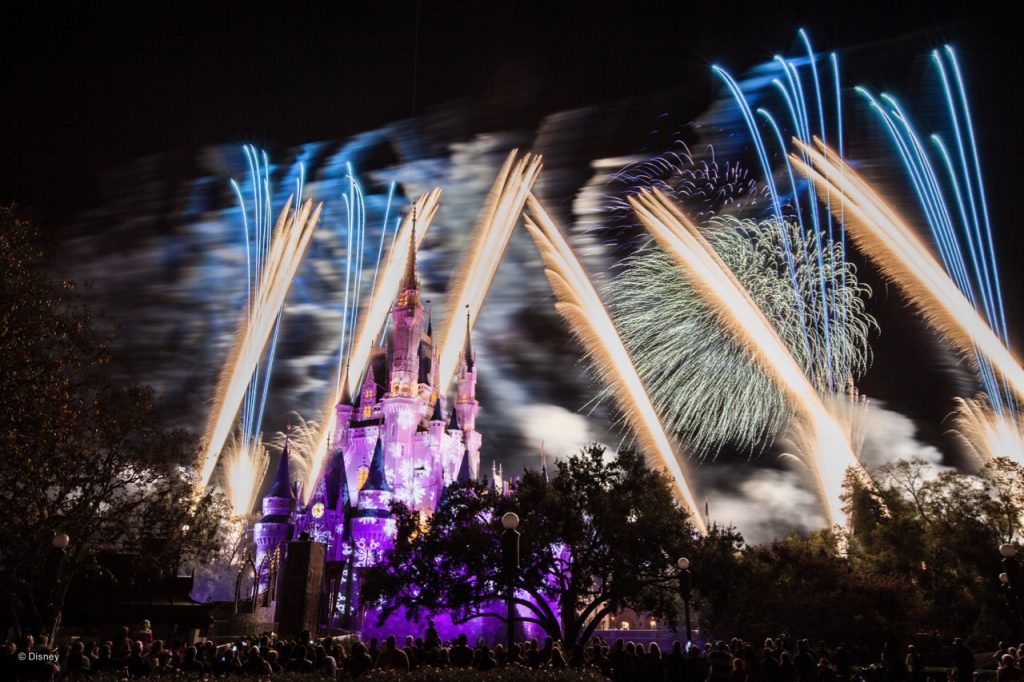