It ain’t half hot again but we brave the heat and venture into Siena to see the Duomo. We missed it last trip.

Wendy has a pleasant lunch and then after a 4 mile saunter we head back home for some cool.

Still the battles rage on Facebook between BREXITers – considered a load of geriatric, racist, xenophobic idiots – and REMAINDERS.

Perhaps time to reflect on some great advice on change – it served me well in my job trying to implement change. Anybody guess who said it and when?

“There is nothing more difficult to take in hand, more perilous to conduct, or more uncertain in its success, than to take the lead in the introduction of a new order of things. For the reformer has enemies in all those who profit by the old order, and only lukewarm defenders in all those who would profit by the new order, this lukewarmness arising partly from fear of their adversaries … and partly from the incredulity of mankind, who do not truly believe in anything new until they have had actual experience of it.” 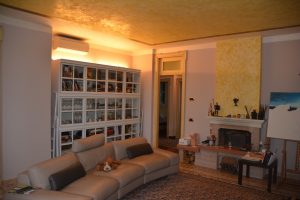 Verona – Lounge. Our lovely home for the next week.

Review of our VRBO outside Siena – 1 star.

A lovely 2 bedroom / 2 bathroom villa. Clean and fairly well equipped, grounds and pool were also well kept. Two lovely patio areas, complete with settee, chairs and dining table. Also sun loungers. Pool area was lovely. Lounge was small but adequate, sadly a tad on the dark side and could do with some better lighting. No air conditioning in the lounge but was in both bedrooms. 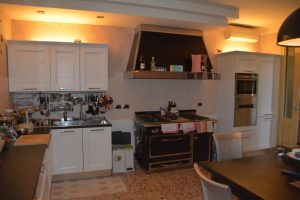 Fairly expensive, but apart from the wifi fiasco it would have been worth it.

Wifi was diabolical. Up and down like a jihadis machete. I complained but things didn’t improve. Just typical. Fortunately all the other utilities didn’t cut out or keep failing and none needed a password to access them. 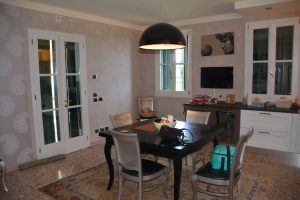 I would have given this place 5 stars but I’m so sick of hotels and rentals not treating wifi seriously. If water, electricity or gas was up and down like this wifi, then you’d be furious. I choose places that claim they have wifi and expect it to work speedily and consistently like other utilities. It’s not rocket science. For this reason I’m giving them a punitive 1 star.

We say goodbye to our lovely villa just outside Siena and drive up to a weeks home exchange on a vineyard just outside Verona. 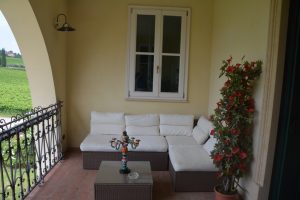 It’s a leisurely 3 hour drive, mostly quality toll roads spoilt only by the crazy exhaust bandits that maraud these highways, a modern day scourge like the highwaymen of old.

Satnav does an excellent job and gets us to our new home. This BMW is awesome, you just identify the location on maps. In this case I used the satellite view to check the villa out and then sent the co-ordinates down to the car. 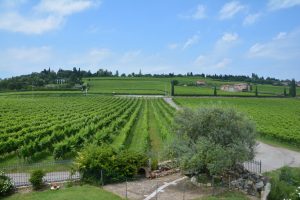 Verona – Vineyards from the balcony

We’ve a 3 bedroom apartment in this lovely villa just surround by vineyards. Even has it’s own gym and pole for Wendy to do some pole dancing for my entertainment – pictures may follow.

Get settled in. Hooray, wifi works. Then it’s off down to the local supermarket, which defying all expectations is open all day, on a Sunday. A nice bottle of Primitivio and some quality German beers along with a few Italian delicious like cannelloni, MELANZANE ALLA PARMIGIANA, porchetta and a selection of Italian cheeses including some awesome Mascarpone cheese.

How many times do we have to hear from our politicians and so called moderate muslims that Islam is a religion of peace and nothing to do with jihadis terrorists or ISIS, a bit like Hitler claiming “Mein Kampf” was a holy book and the Fuhrerbunker a mosque.
Monday – hot and sunny 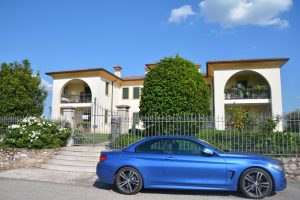 Fairly lazy morning and then we drive into Verona for a shufty round. No hop on / off tour, no guided walking tour, just us and google maps exploring the most popular looking places. Bump into Juliets balcony purly by accident, not really on our list. What a tourist magnet it is, teaming with us dam tourists. 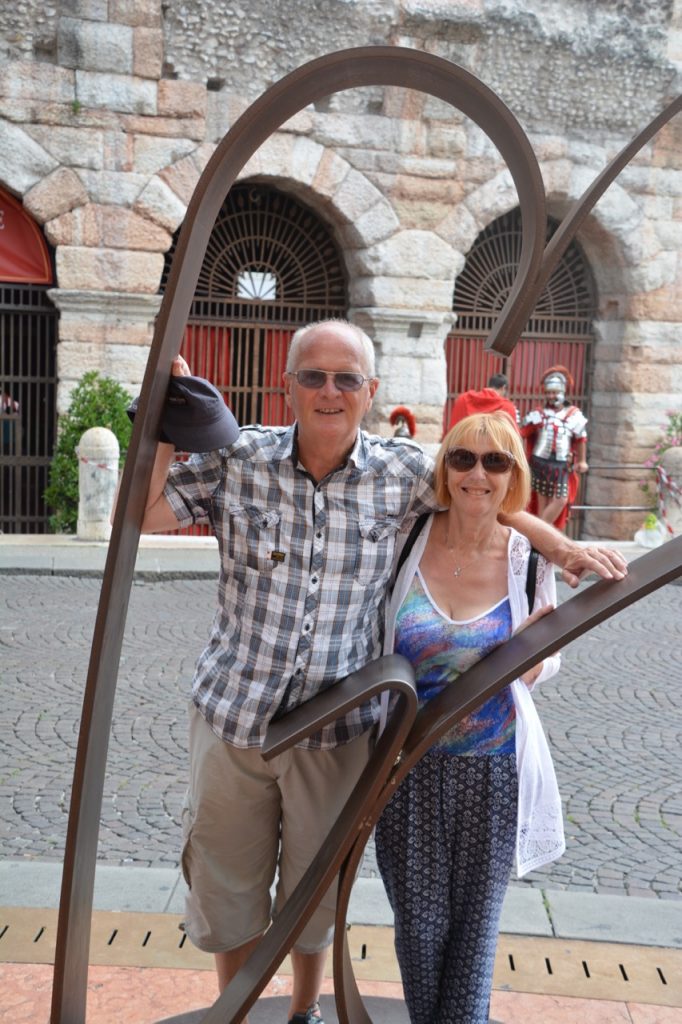 Being of the “forgot what I had for breakfast” age, today I forgot to put my belt on so there I am shuffle around Verona in dire risk of my shorts falling down. How embarrassing would that be under Juliets balcony. “O Romeo, Romeo! Wherefore art thou you pervert? Pull up thy draws, stop thy codpiece being faded by the suns almighty rays.” 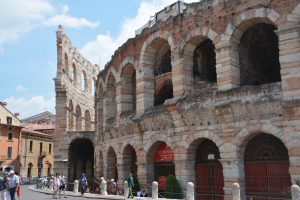 I ask if we should go in the amphitheatre and see where they feed crap software designers to the lions on a Saturday afternoon. Wendy comes back with a typical BREXITer abroad comment “It’s only an old building with holes in the walls and an arena in the middle”. 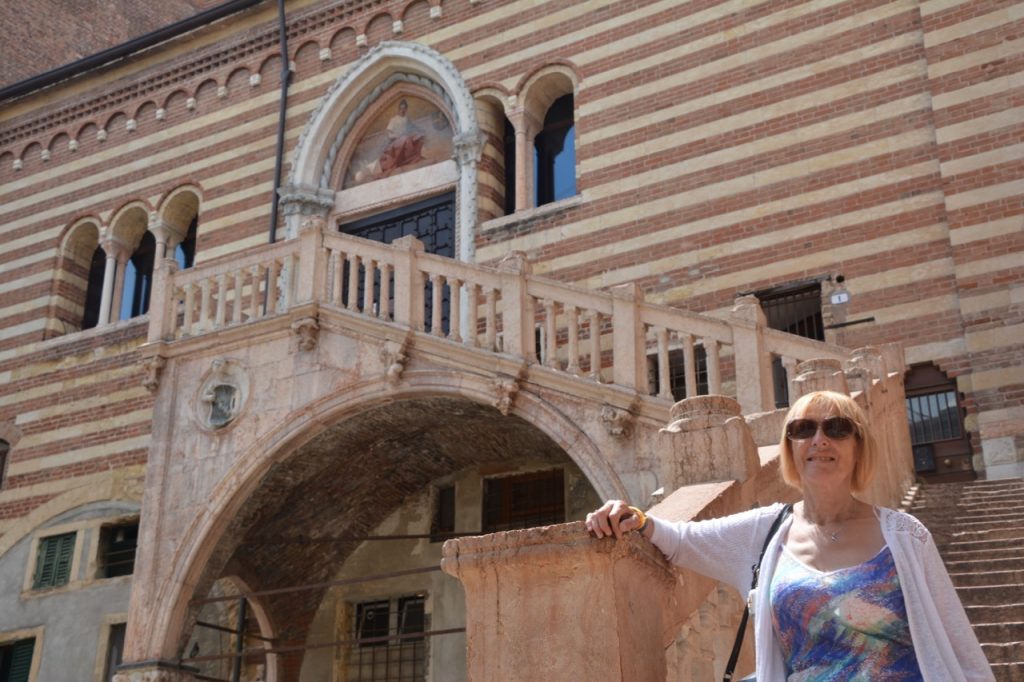 Driving in and out of Verona was an absolute nightmare. Italian roads in the cities are as confusing as a bowl of spaghetti, but then you add more wanker drivers per kilometre than pilgrims perambulating around a black pagan obelisk in Mecca. 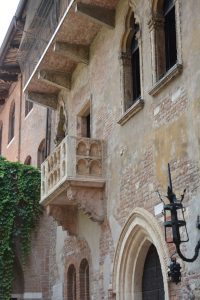 We chose a really central car park. It was great, even had those little red and green lights on each bay so you knew if they were free or not. But €9 for 3 hours I thought I’d bought the place.

Bill Maher gets into a debate on why Islam is more Violent than Christianity: 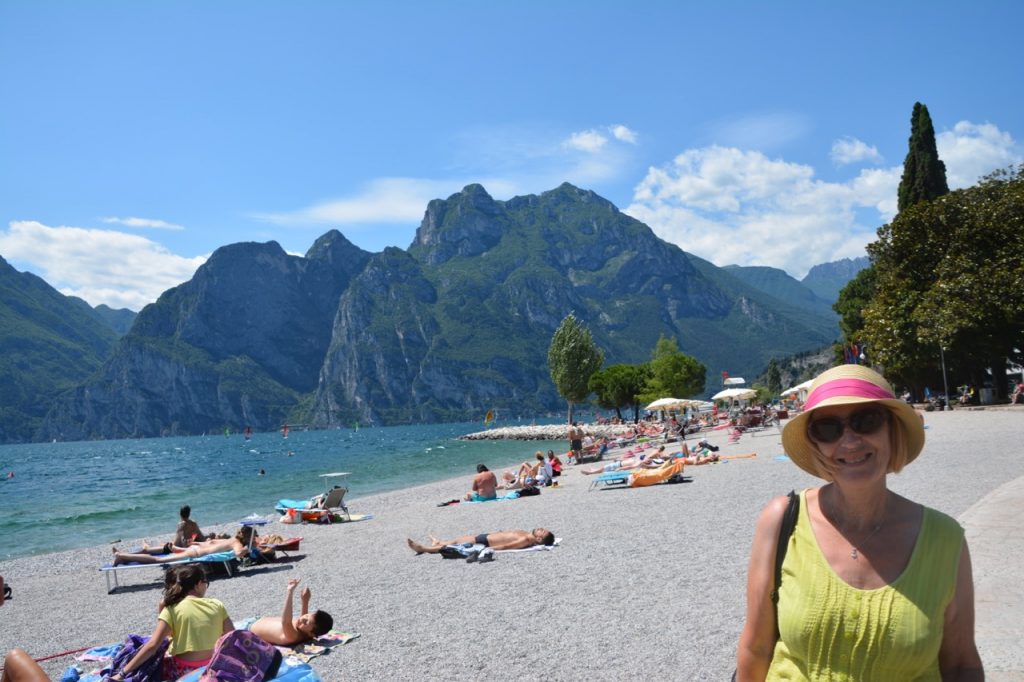 Up and out for a drive around Lake Garda. First 20 miles makes us think we’re in Blackpool with theme parks, a Paradise for your sad Brits abroad. But then it gets to the really beautiful parts. It is lovely but all 100 miles are spoilt by loony drivers. Stop for morning coffee by the lake in Garda. It has a typical seaside resort feel about it. A lot of Brits. 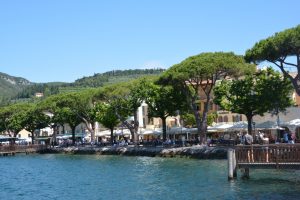 Then we have dinner at the top end of the lake.

A pleasant but long days driving. Made all the more stressful with exhaust bandits and loony motorcyclists on narrow winding roads.

Well we’ve still not come across the hint of a tin of baked beans. Now I’m all in favour of the “when in Rome” principle, and do like to experience foreign foods, but how I do yearn for a simple meal, just once in 6 weeks. Anyway I’ve come up with some new International suggestions. What about macaroni and baked beans, perhaps with diced pork sausage or a baked bean pizza with some pepperoni on. 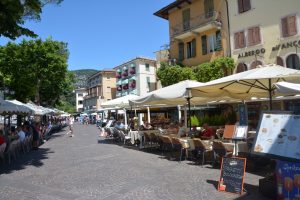 Just sat on the balcony enjoying a delicious Paulaner beer whilst I watch the grapes grow out there in the vineyard.

I now fully understand this Mediterranean obsession with shutters. Essential to keep the place cool but we end up like bats in a cave, fluttering around in the dark. 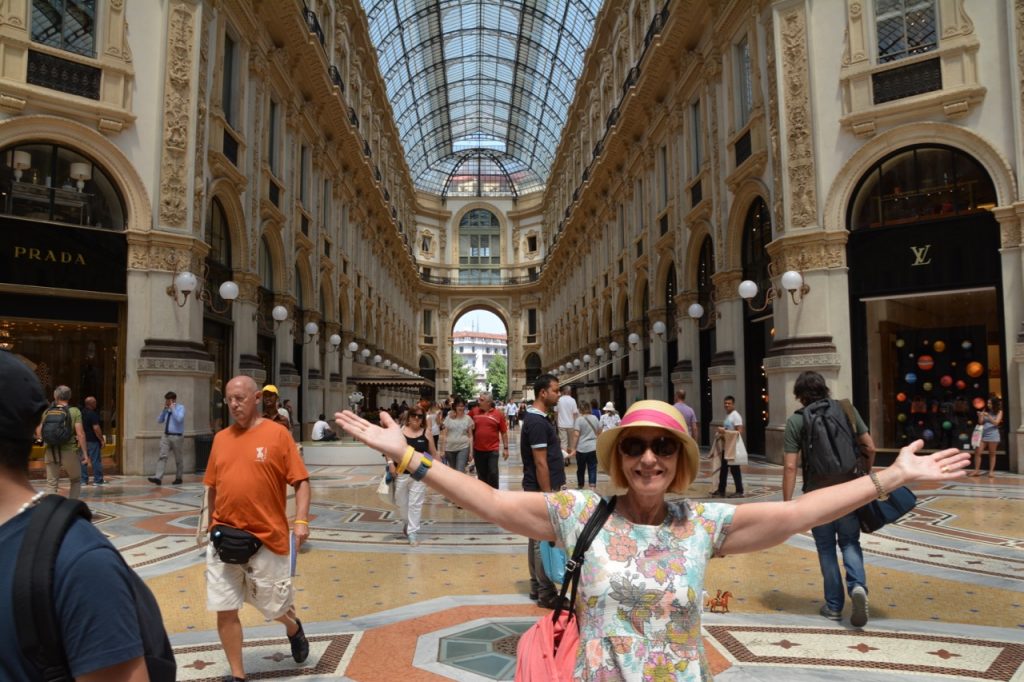 Up and out early and off to Milan. Drive to Brescia. Finally find the station car park. Get a first class on the slow train to Milan. Judging by the state of the carriage I think it’s actually 3rd class. Certainly doesn’t need any shutters, looks like the Windows haven’t been cleaned since world war 1. 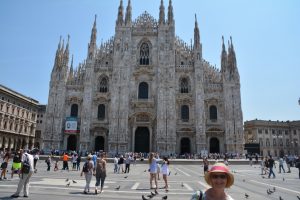 In Milan we catch the underground to the Duomo. Wow, makes the Siena Duomo look like a Lego church. It is truly awesome. Have a coffee overlooking the main piazza and then set off for a wander around. Expensive shops and all very plush. A lot different from all the other Italian cities, not so much culture more commerce. A pleasant change.

Get back to Brescia to pick the car up and despite dire warnings the car and it’s contents are still there. 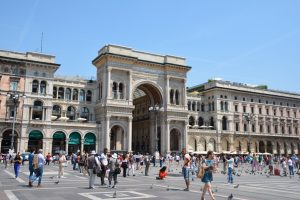 Our American visitors do make us wander at times, they come all this way to stay in our home and then “nip” down to Stonehenge. A 5 hour drive each way. We can’t seem to get across to them how much there is to see and do within an hours drive.

This home exchanging is a funny old business. Not only do you get to stay in so many different houses but you also get a squint into how people live. Makes you realise how different peoples lives can be. For instance can you believe that not everyone has a kettle. On the other side of life many people have a bidet to wash their feet in. What is this European obsession with washing your genitals? I’ve always said we don’t make good Europeans – “you can’t make a milky pure European out of a Brit with big ears and mucky smelly genitals” – being just one of the many ways we don’t fit, so we’re better off out. 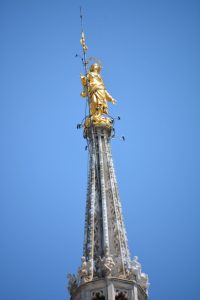 I went to Morrisons today to do my shopping and the cashier asked this foreign couple in front of me if they wanted help packing their bags.

I thought bloody hell, this BREXIT is happening quicker than I expected! 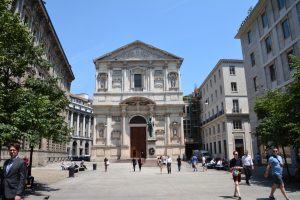 Meanwhile it seems that gobby Sturgeon now wants a 2nd referendum so Scotland can escape the clutches of the UK and join the EU. What a good idea, but this time let’s make sure that England takes part in the referendum too, with an option to eject them from the UK. Then if they vote to leave, or we vote to eject, they go. I’m sick of their whinges and that gobby wench. What a nightmare it would be waking up with that yapping away on your pillow.
Thursday – hot and sunny 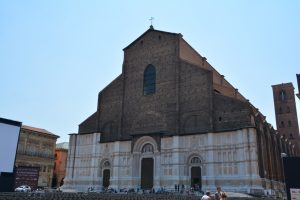 Off down to Bologna. Parking was a nightmare. My target car park was minuscule and relied upon valet parking. Certainly wasn’t trusting my pride and joy to that dodgy looking geezer. Ended up parking on the streets, just outside the forbidden ZLT zone.

Bologna, an Apple Store, more eating joints than small Italian banks about to go belly up, but amazingly nothing to tempt Wendy. She looses the will to live and resorts to Mac Donald’s, sad – at least there’s no cover charge. 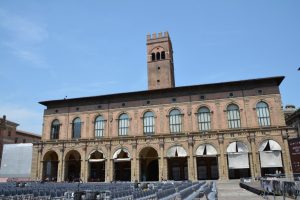 Not quite as chic as Milan yesterday, and the church is quite mundane compared to all the others we’ve seen.

Nice covered walkways / arcades everywhere means you don’t have to shadow dance to stay out of the sun. Old town area was fascinating with some awesome food shops selling hams and cheese. Just a pity you can’t capture the delicious smells. 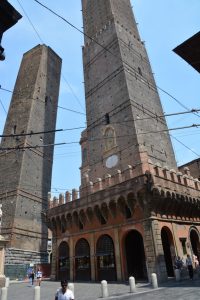 Bologna also has a leaning tower.

Have a pleasant wander around the main sites but it’s oh so noisy and considering traffics supposed to be limited in the forbidden ZLT zone, I can’t believe how many cars, scooters and buses there are. Too much traffic. Too noisy.

Don’t forget we need the immigrants to do the jobs us Brits won’t or can’t do. Like Prime Minister or leader of the opposition. 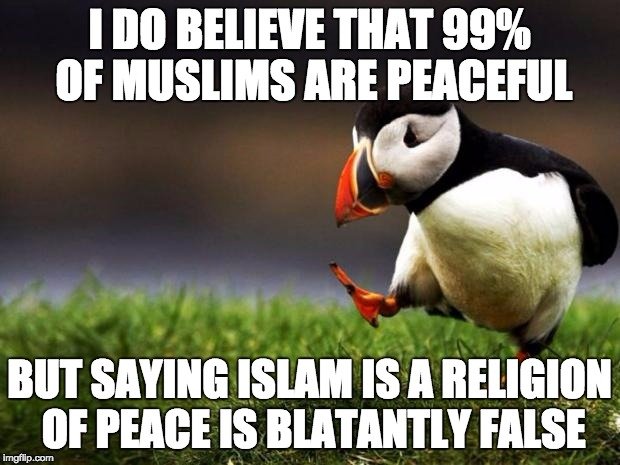 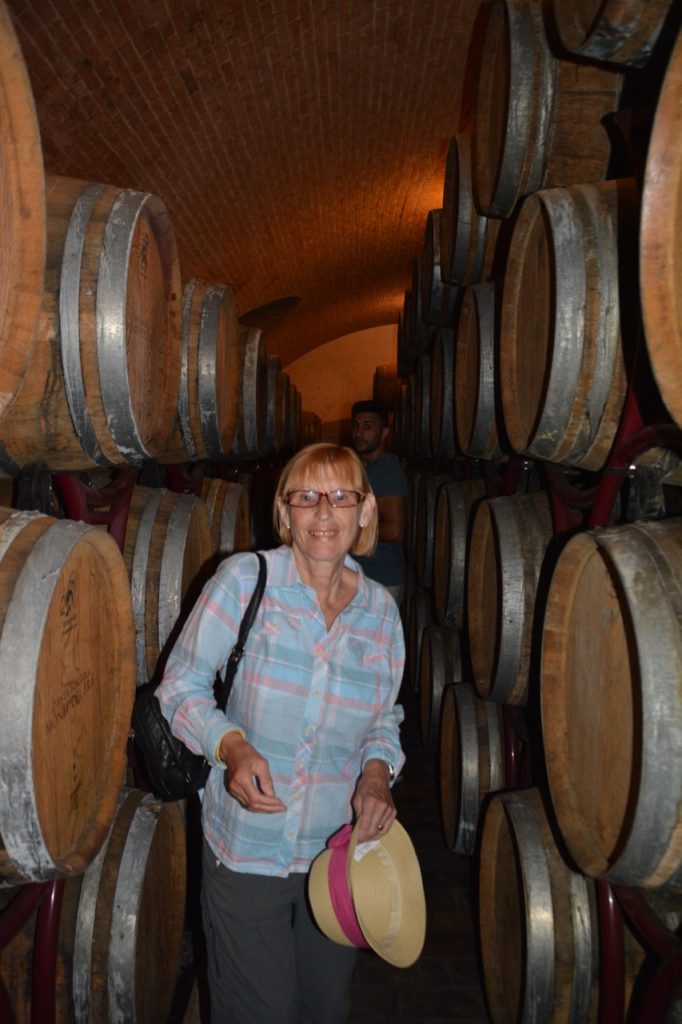 Lazy day today. Have a wine tour in the morning. All very interesting. These vineyards are massive. 175 Hectares and they sell to 47 different countries.

At the end of the personalised tour we get to do some wine tasting. Love the Valpolicella Superior, my first Valpolicella in Italy was nowhere as rounded and mellow as this, and their was great Merlot. Sadly this meant committing a retirement sin by drinking before 17:00, but it would have been rude not to. 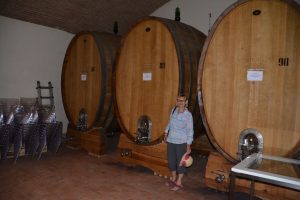 A few bottles in this barrel

Then we have the rest of the day packing and relaxing before our drive to Austria.

A fine bottle of Valpolicella Superior, some awesome Italian cheeses, some see through Proscutio and bread for tea. 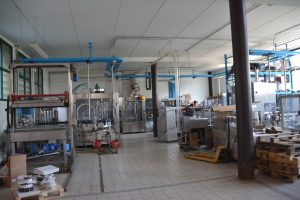 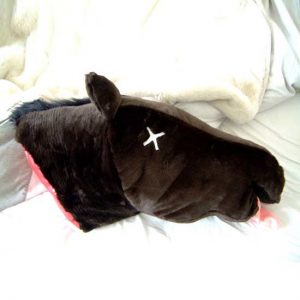 The United Nations Security council have been called into session and we’ve have now amended our sinful ways and averted any bloodshed. I’m glad to report that so far we’ve not found a dead horses head on our pillow. Our hostess has been very helpful and hospitable, but this incident, totally outside of her control, soured a lovely stay. 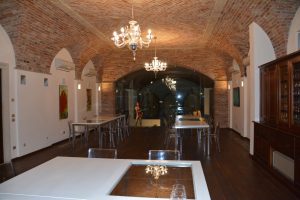 Why does Britain like tea so much?
Because tea leaves

What did Britain say to its trade partners?
“See EU later.”