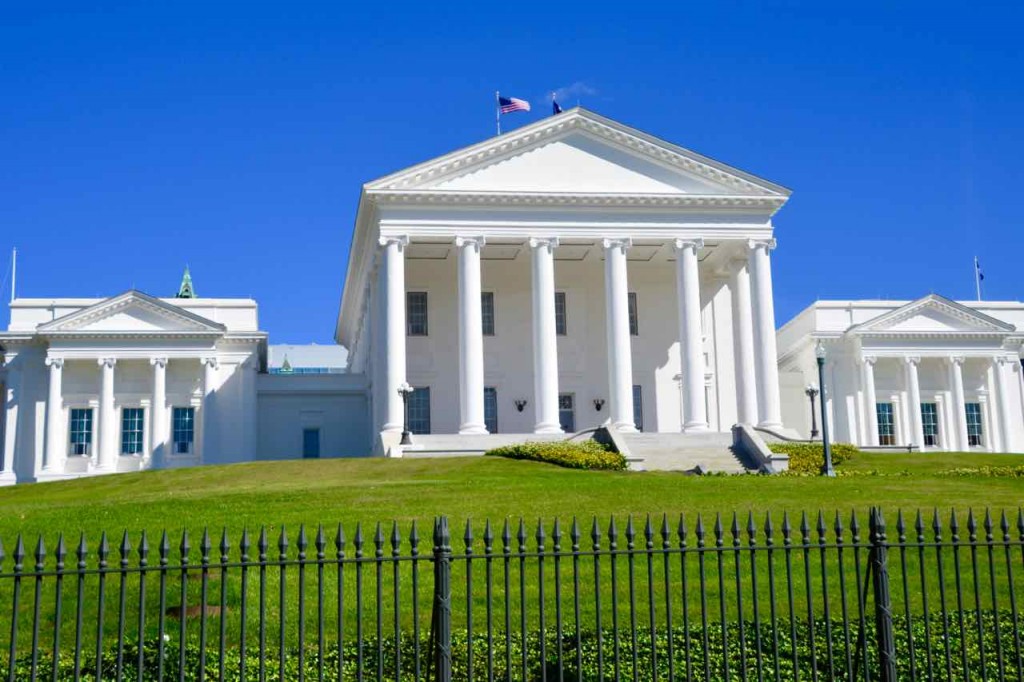 Richmond Capitol building, alas no time for a free tour.

Up and out to do the trolley tour around Virginia. Not one of your usual hop on and off tours but the guide narrates some interesting tales of the city and it’s a great way to see it. 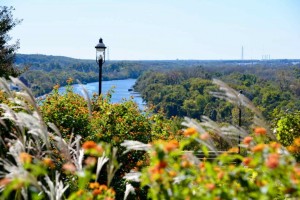 Then drive down to Virginia Beach. Our Comfort Suites is supposedly at Virginia beach but is about 10 miles away. Must be some marketing departments magical slight of hand that it has a Virginia beach address.

Apparently our King Bed Suite has been over booked so they apologise and try to put us in a a two Queens suite. I of course kick off. “There’s no excuse for overbooking these days other than corporate greed. Move some one else. I’m not accepting it. Is this how you treat Gold Elite members. What are you going to do about it?”. We get a free nights stay and I accept the twin queens. To be honest I was not even that bothered. It was just the principle of it. If they’d said there’d been a problem and offered a $10 discount up front then I’d have been happy. Turns out to be a nice two room suite. 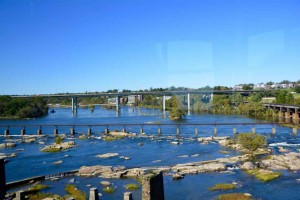 Drive down to Virginia Beach for dinner. Just like Blackpool without the fun fair and tower, except that there were no “Kiss Me Quick” hats or drunken herds marauding the sidewalks. We pass on dinner in one of the greasy spoon joints down there and resort to a sub (sandwich) from JJ’s near our hotel. A typical over stuffed american sandwich, so much meat that every time you take a bite a pile of meat shoots out somewhere else, like a 42″ DD smothered in oils between two slices of bread. At least Subway know how to make a sandwich that doesn’t try to ejaculate with every bite.

Not impressed with Virginia beach so at least we can have an early start in the morning down to the Outer Banks.

Some of the crazy laws in and around Virginia:

Not only is it illegal to have sex with the lights on, one may not have sex in any position other than missionary.

There is a state law prohibiting “corrupt practices of bribery by any person other than candidates.

Citizens must honk their horn while passing other cars.

Children are not to go trick-or-treating on Halloween.

It is illegal to tickle women. 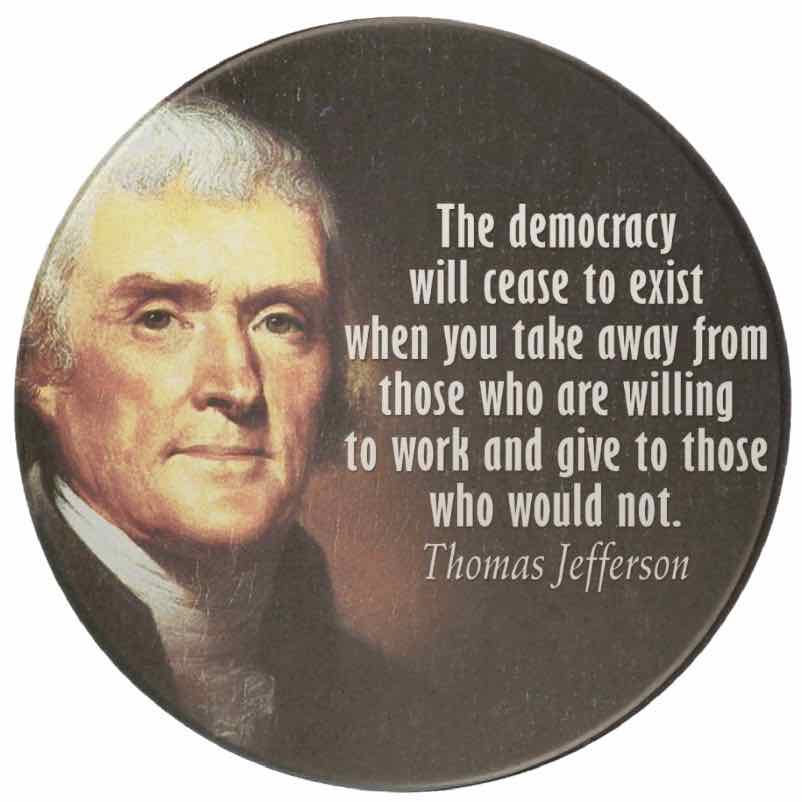 So true. What a wise old bird he was. 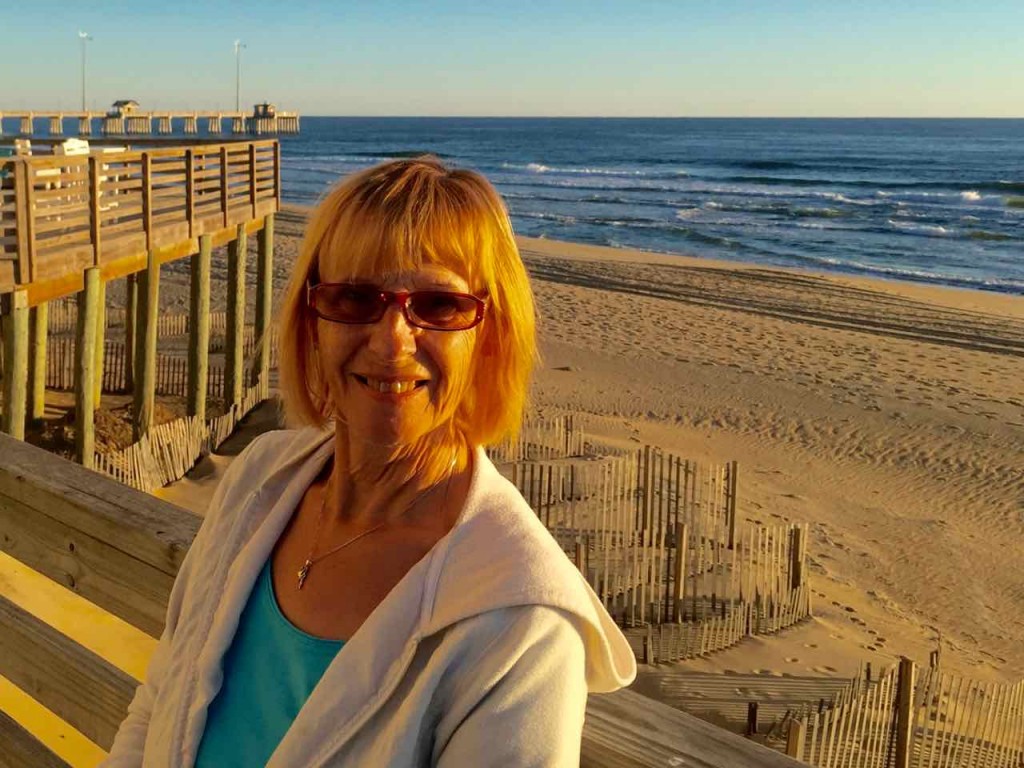 Nags Head. No, silly you, that’s the name of the place.

Drive from Virginia Beach to the Outer Banks. Finally find the Wright Brothers National Memorial at Kitty Hawk, no thanks to the map drawn by a 2 year old with the common sense of a politician and a rampant labelling machine. 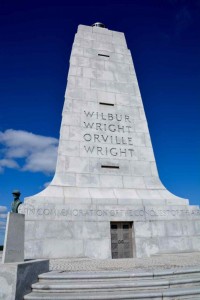 Monument to the Wright brothers.

Part of my pilgrimage to this awesome birth place. I don’t understand why, but it just seems such an awesome historical moment not to miss.

852 feet, 59 seconds may not seem much but on December 17th 1903 it marks the first powered flight. A giant leap forward for mankind. The birth place of aviation. Can you imagine what life would be like without the ability to fly? 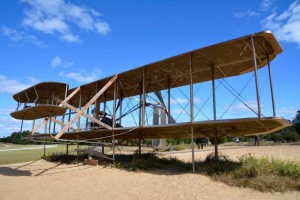 Mockup of original bi-plane used on a day that changed the World, December 17th 1903 at Kitty Hawk.

Not only did they build the plane; they built a petrol engine to power it; they even developed a wind tunnel to refine the wing shape. To be fair though it seems that George Cayley was the original father of aerodynamics. His 1804 glider incorporated most design elements of a modern aeroplane, but then who’s ever heard of him – not even a pub quiz fanatic. 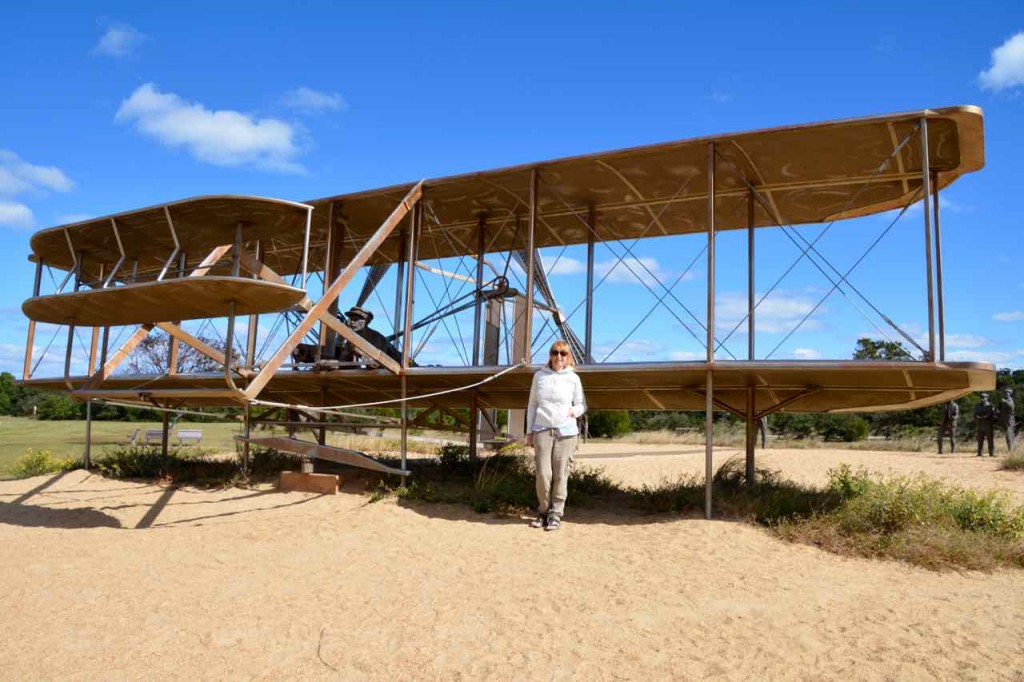 Wendy has finally found the aeroplane of her dreams, no claustrophobia with this.

We then visit Manteo on Roanoke Island, a charming little town by the sea. Stop for Wendy’s lunch and an Amaretto coffee at a comfy little coffee shop.

Roanoke Island has been known in European-American history for its significance as the site of Sir Walter Raleigh’s establishing of an English settlement with his Roanoke Colony in 1585 and 1587. As the fate of the final group of colonists has never been determined, myths have developed about them. Stories about the “Lost Colony” have circulated for more than 400 years. In the 21st century, as archaeologists, historians and scientists continue to work to resolve the mystery, visitors come to see the second-longest-running outdoor theatre production in America: “The Lost Colony.” 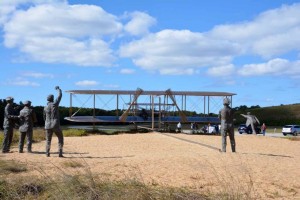 Drive down to Pea Island nature reserve. Don’t really get to see much nature, apparently just missed two Bald Eagles. Visit one of the many light houses.

It’s a really lovely area by the sea and we’re tempted to stay for a second day.

Mockup of original bi-plane used on a day that changed the World, December 17th 1903 at Kitty Hawk.

Overnight at a Comfort Inn at a little place called Nags Head. Well in American style not really so little as for such a small population it sprawls like a Gulf Coast oil slick, over 15 miles long and straggly. Lovely little town on the outer banks. Not quite figured out the source of its name. Perhaps it was named by a keen horse race fan or even by some one married to a gobby trollop who needed fitting with a scolds bridle. Walter Raleigh landed in nearby Roanoke Island, of list colony fame, so perhaps it was even named after his domineering wife, Elizabeth Throckmorton, no wonder he spent so much time at sea. 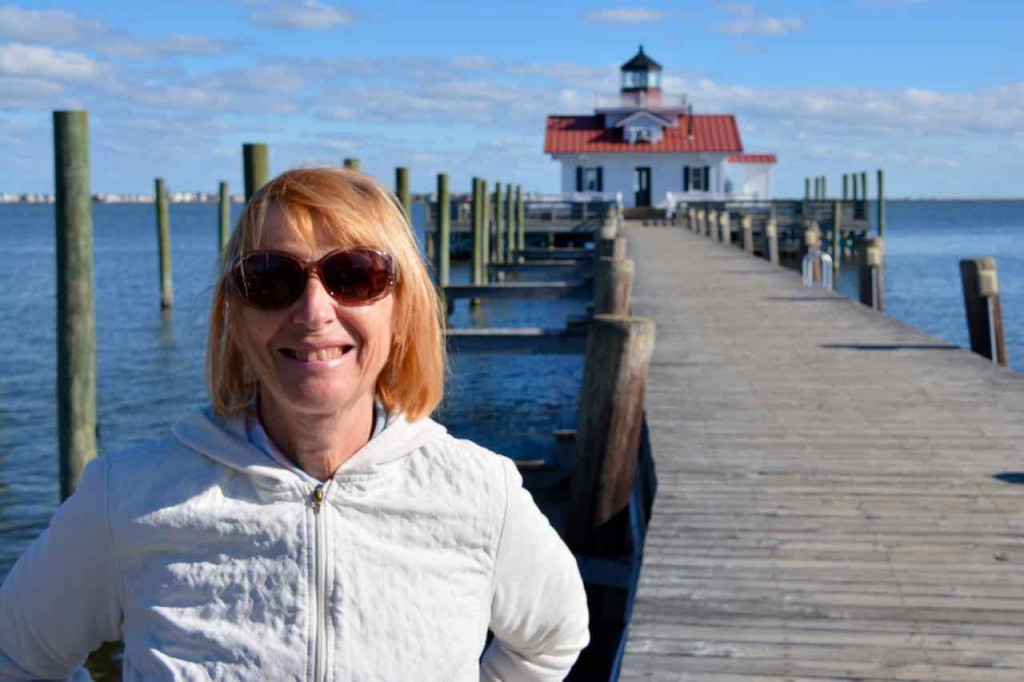 The light of my life at Manteo on Roanoke Island. 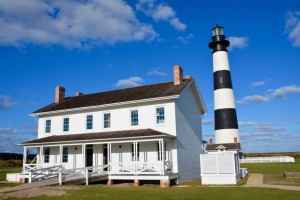 No one may wash a mule on the sidewalk.

Spitting on a sea gull is not tolerated.

A man may face 60 days in jail for patting a woman’s derriere.

Women must wear a corsette after sundown and be in the company of male chaperone.

No person may keep a skunk as a pet.

It is illegal to park a car on railroad tracks. 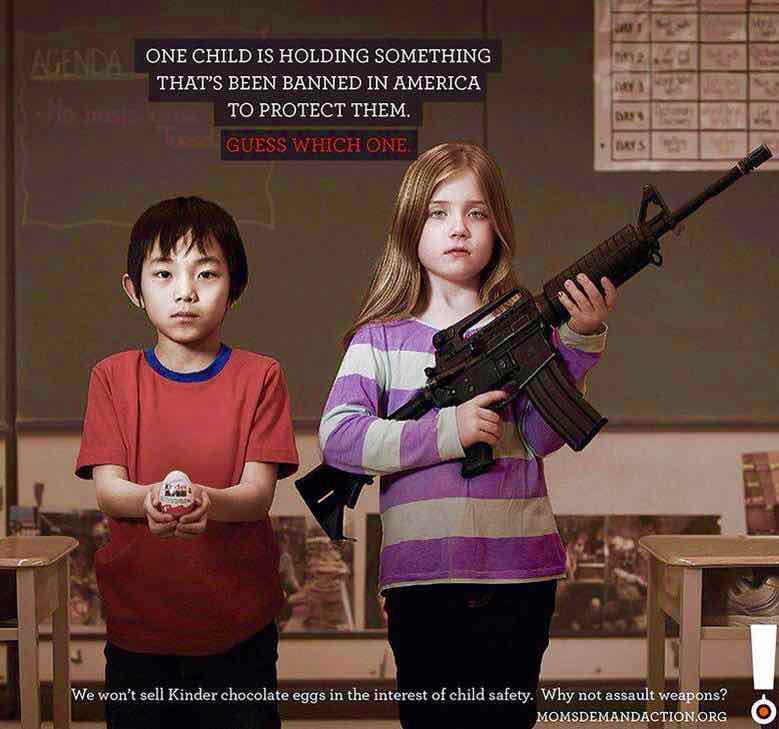 One child is holding something that has been banned in America to protect them. God bless the 2nd and don’t F..k with the NRA. Madness.

Up early and off for a 330 mile drive down to our 4th home exchange in Myrtle Beach. After our experience of Virginia Beach we both have some trepidations that it will be another American style Blackpool. 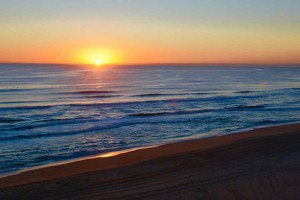 6 hours, 330 miles and not even the whiff of an Interstate and we arrive at our home for the next two weeks. It seems to be well outside the central, high rise mess that we think is Virginia Beach. We’re in the trees by the see on a fairly big time share style gated resort. Our two bedroom condo is on the top floor (5th floor), with balcony and views out over the sea and the trees of an adjoining caravan site. In the distance we can see the high rises of Myrtle Beach. Best of all we seem to have good wifi and the ultimate enlightenment – no password. 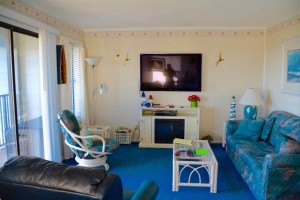 Lounge in our Myrtle Beach home exchange, along with Cinerama sized TV screen.

Condo’s really brightly and tastefully decorated with Lighthouse and seaside theme. Only one minor downside, common to most American place, no kettle. Instantly feel at home here.

Get settled in with an afternoon tea and then do the weekly shop. Now most American supermarkets are pretty impressive, even by my “why am I here” standards, especially chains like Ingles with their awesome customer service. But alas not the local Food Lion. No Wifi; lousy choice of wine it seems everyone around here needs the giant magnums; as for beer forget it, American pickle water, not a decent German beer to be seen; and to add insult to injury not even a Starbucks to while away the day whilst Wendy savours the labels. 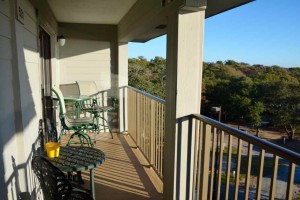 Balcony in our new home exchange.

It is illegal to flip a coin in a restaurant to see who pays for a coffee.

It is legal for a man to beat his wife on the courthouse steps so long as it is before 8:00 pm.

It is also unlawful to drive by the same place within 30 minutes on Atlantic Avenue.

If you are drunk and not driving your car, and the person who is driving the car is drunk as well, you may both receive DUI’s.

It is illegal to use profanity on Atlantic Avenue or the boardwalk.

It is illegal for a woman to drive a car up Main Street unless her husband is walking in front of the car waving a red flag.

Only in America would you have Halloween costumes for dogs. Even advertised on TV to top it off. Surreal.

Wednesday – hot and sunny, again not a clue in the sky. 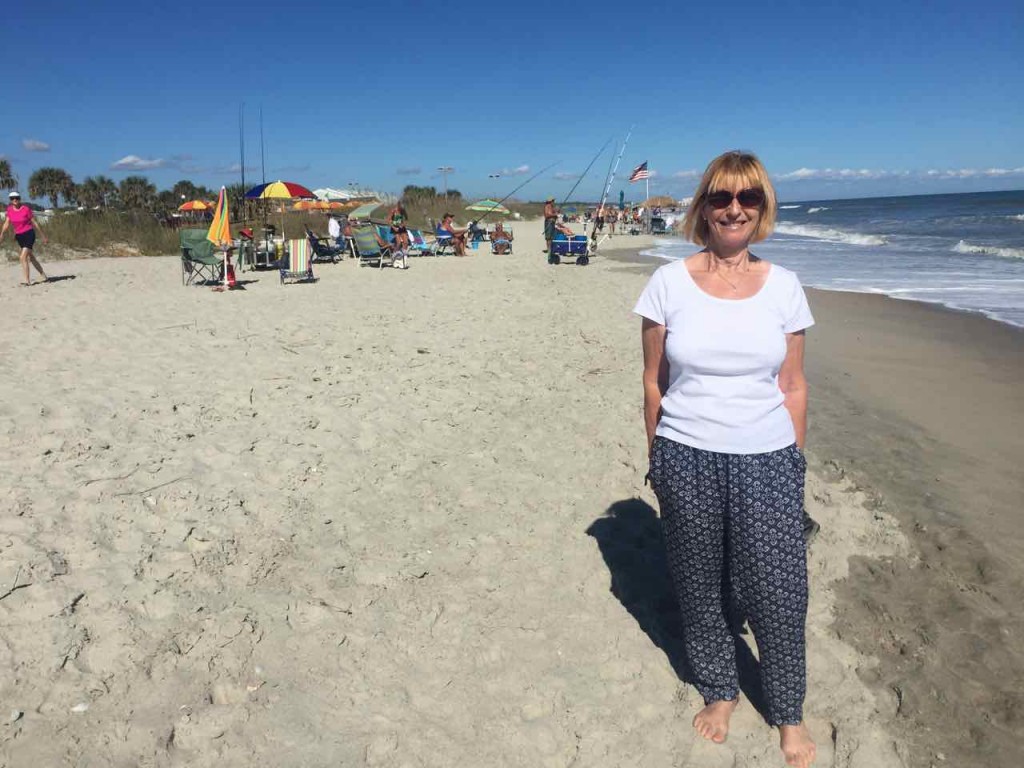 An afternoon stroll along Myrtle Beach.

Lazy day after all that travelling. Time to unpack, get settled in and get the washing done. Time to have a pleasant stroll along the beach. Time to plan our next 10 days here.

Most people on the beach have two things in common. Firstly they’re very sun tanned. Secondly they resemble a cross between the Michelin Man and the Pillsbury Dough Boy. A lot of them are fishing off the beach and yet no evidence of anyone catching a fish. 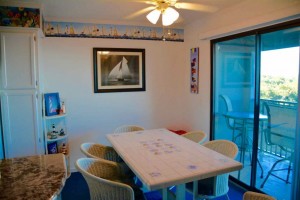 We’ve enjoyed our 6 days on the road. Seen a lot and visited many awesome places. I think we’ve got these road trips pretty well organised by now, but after living out of hotels, suitcase and great American junk food, it also nice to have a stable home to stay in with Welsh rarebit and simple meals. At least on road trips I get to avoid them pesky greens and vegetables. I suppose the ideal would be 10 days in a home and 4 days on the road, but so far we’ve not done so bad. 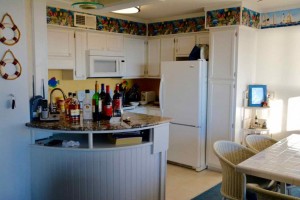 The earth is greener and farms are more productive because of the carbon dioxide emissions linked to global warming, an author of the original UN climate treaty has claimed.

The planet can support more people because CO2 has boosted crop yields, the scientist Indur Goklany has claimed in a controversial paper published by the Global Warming Policy Foundation, which is sceptical of climate change. 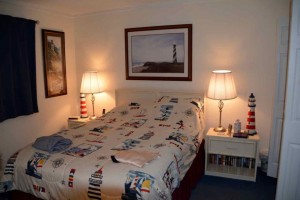 The report, Carbon Dioxide: The Good News, which has not been peer reviewed, proposes that the impact of rising carbon dioxide concentrations “is currently net beneficial for both humanity and the biosphere generally”.

So what’s new? It’s been known and acknowledged for some time that higher CO2 levels can increase crop yields. Must be a slow news day. 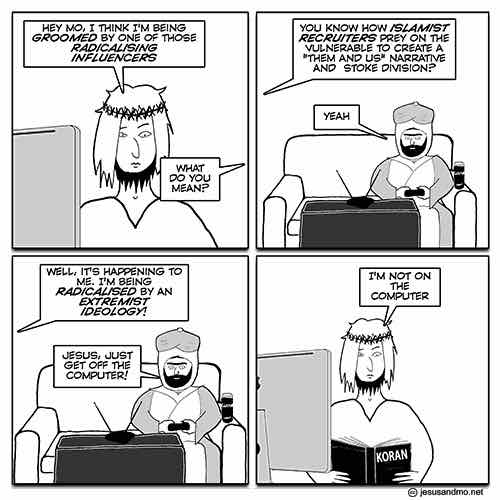 Read it to believe it.