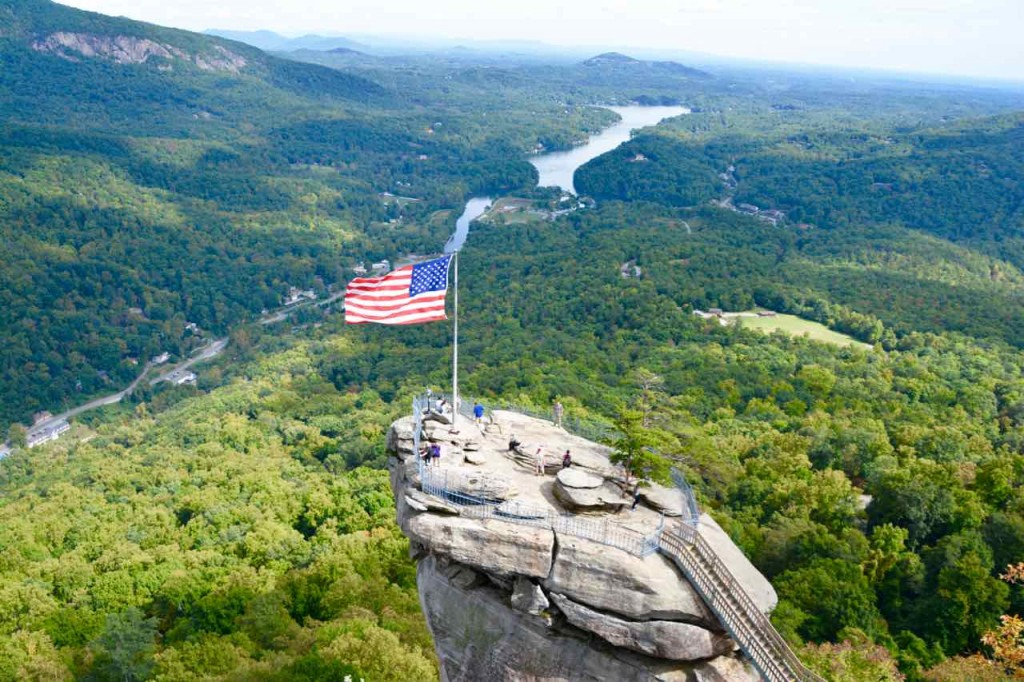 Drive out to Chimney Rock state park – see pictures. It’s at an altitude of 2,280 feet, about 499 steps – you’d have thought they could have added just 1 more. Of course being America there’s a lift. Unlike those youngsters who take the lift whenever possible, and then spend all their time earwigging on people conversations, we go for the steps – great exercise. 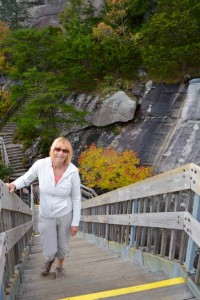 On top of that we do a few hundred extra steps and a hike out to the Hickory Nut Falls.

A great state park and yes worth the $11 entrance fee. Had an awesome afternoon. Plenty of exercise, especially for me gamy leg. Afterwards have a wander around Chimney Rock village and a well deserved coffee. 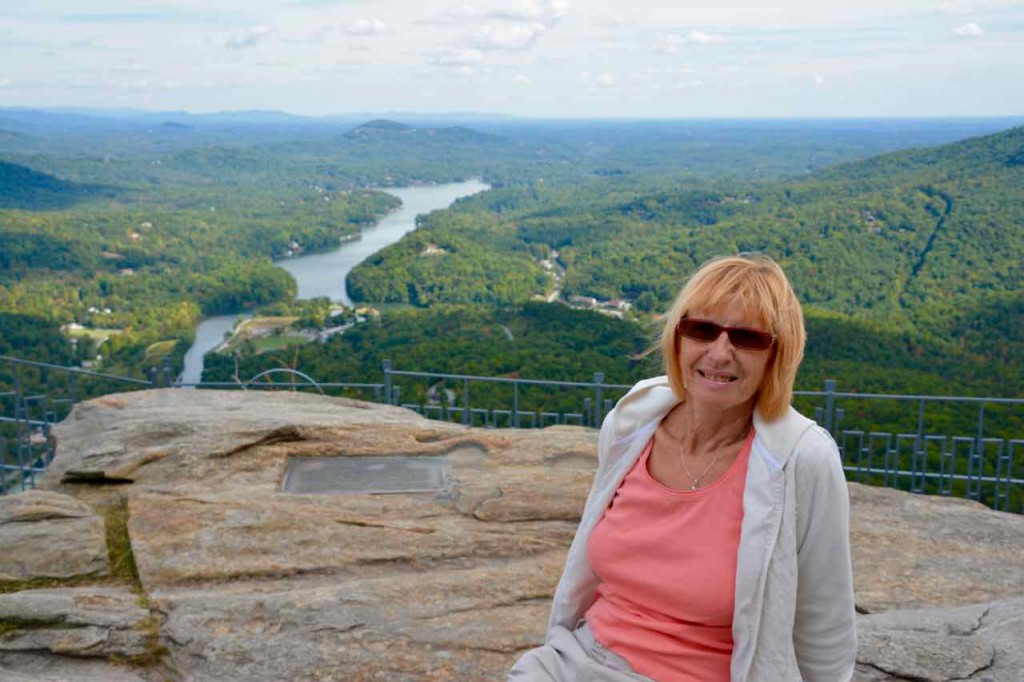 Wendy having a well earned rest after 499 steps and many stops.

My sorry sense of humour
Only £0.05 to kill a Turtle – hilarious: 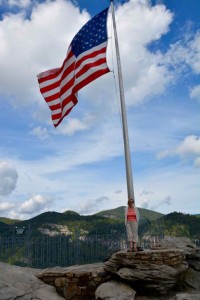 Flag at top of Chimney rock. Yes it’s a big one. Unlike the UK they’re proud to fly it.

Amazing you drive through the North Carolina countryside. Real hillbilly country, not a car or any signs of civilisation or sentient life form, not even the Deliverance clan or the Dukes of 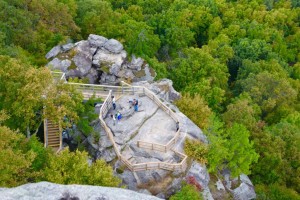 View down onto Pulpit rock.

Hazard. Nothingness, but loads of “No Parking” signs. Can’t imagine anyone would want to park there anyway nor would they want to violate the multiple “Absolutely no trespassing” signs. Perhaps Hynburn councils reach and terminal stupidity extends over here.
Religious rant of the day 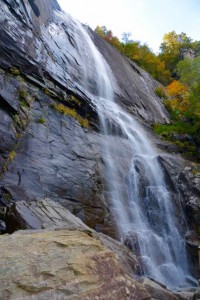 I don’t think Muslims go far enough in killing people who draw images of the prophet Mohammed. What about dealing with all those who take his name.
Friday – hot and sunny. 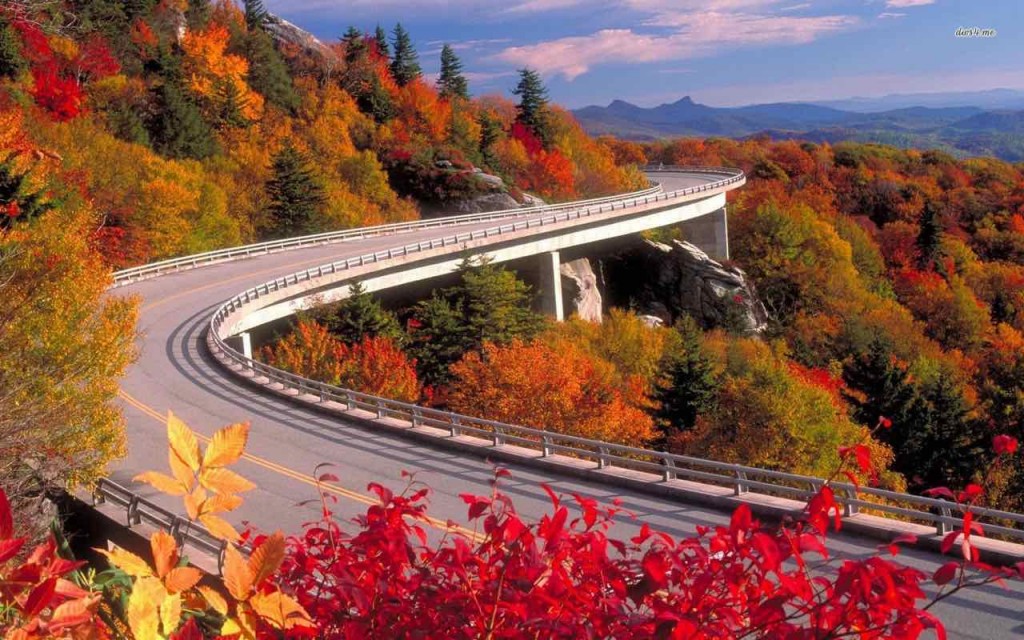 One of the most picturesque stretches of the Blue Ridge Parkway. Not been there – yet.

Lazy day. Time to catch up on sorting out all the admin problems created by the weary of the World. Get a full refund from the ultimate wankers at Knowhow cloud as I report them to Natwest for fraud, then seek retribution via FSA, Data Protection and request for compensation. Pay dentist bill. Reply to those brigands at ParkingEye. Sort out home exchange in Alabama for end of our trip, that’s 6 home exchanges covering 12 weeks of our 14 week trip – saves a fortune. Order my foot stool and Wendy’s Coffee tables. I’m exhausted. 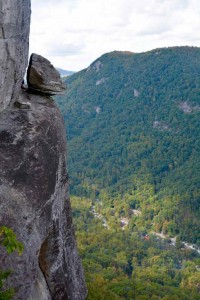 Time for some coffee, Kindle and rocking chair on the verandah.

Alan from downstairs takes us for a grand tour behind the scenes at Montreat and a tour of Black Mountain. It’s a lovely small town nestled in the mountains and trees of North Carolina.

Montreat is a small town in Buncombe County, North Carolina, United States. The population is 723. The town is best known for Montreat Conference Center, Montreat College, and for being the home of evangelist Billy Graham and his late wife Ruth Bell Graham. 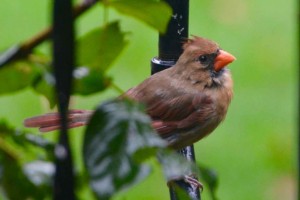 Watching one of our early morning visitors over breakfast.

Black Mountain is a town in Buncombe County, North Carolina, United States. The population is 7,848. The town is named for the old train stop at the Black Mountain Depot and is located at southern end of the Black Mountain range of the Blue Ridge Mountains in the Southern Appalachians. Originally the land was occupied by the Cherokee Indians but the “Trail of Tears” soon solved that problem – part of Americas bad past. 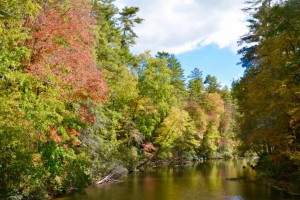 Autumn on the Blue Ridge Parkway.

Then in the evening we go down for dinner with Alan and Shell and 3 dogs. Lovely home cooked meal, Southern style. Great food, great apple pie, great company and of course some wine.

As always we put the world to rights and share war stories about the multicultural invasion of our countries. They have exactly the same do gooder, multicultural, politically correct storm troopers selling their country down the loo as we do. Immigration and the rise of Islam are a common theme.

Rant of the day
One smart sensible gun owner. One small step towards gun sanity, one giant personal leap of commitment to a safer USA.

Religious rant of the day
Sir Winston Churchills views on Islam:
Saturday – rain, the very wet kind, but at least it’s not cold 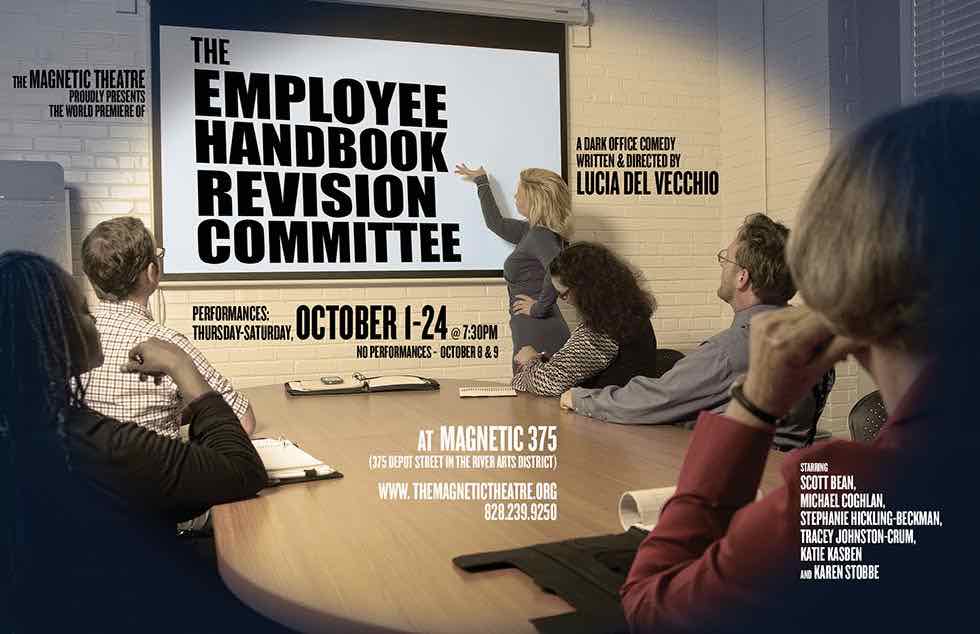 Our evening of culture.

What to do in Asheville in the rain. Go to the Folk Art Museum; goo to the Mall along with the rest of Asheville and every leader visitor; shop at Walmart for knitting wool.

The rain here even puts Blackburn to shame. 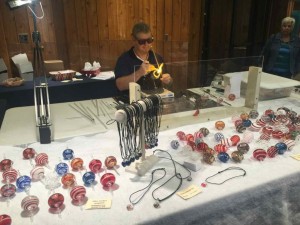 Glass blowing at the folk art centre. Wot no potters or dodgers – sad.

We’re having an evening of culture, out to the theatre. After an extreme overdose of retail therapy we go to the Barleycorn gastro pub. I get the pleasure of going into a pub, looking at a range of 30 different perverted beers, yet as nominated driver can’t drink. Is there some completion going on to see who can make beer out of the most horrific ingredients. How about a sweaty sock fruit and nut Lambric, would certainly not be out of place among this lot. I can’t drink but almost thankful. 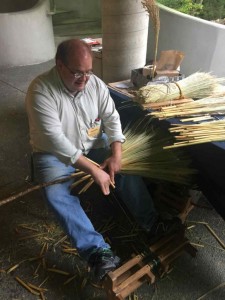 Back to the meal. A great menu with some unusual items on it. Food is really tasty. The chef obviously has a flair for creating different flavoursome food. Well presented. Plenty of it, of course. Good service in an pleasant, fitting and unique atmosphere. 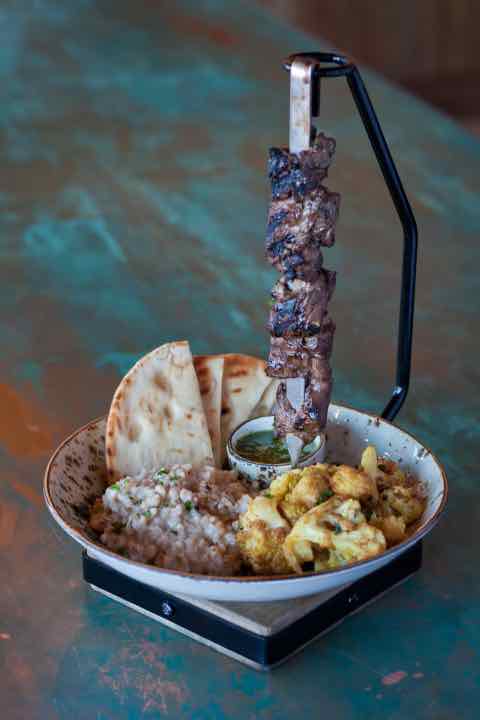 At this minuscule theatre, seats about 100 on school chairs, with all the fruit cakes. Extreme arty farty types; some of them dressed fit to be a jester; tattooed of course; men, well I don’t think they’re women, pierced wherever the eye can see and no doubt where it can’t; tree huggers; and of course just to confirm my inane prejudices they’re bound to be veggies.

Then one member of the audience, on the front row, is prancing around before everyone like an escapee from “Strictly Come Dancing”. 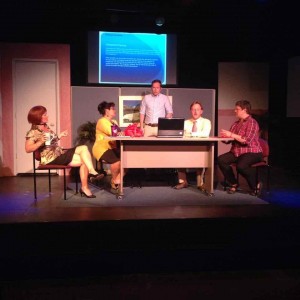 Our evening of culture.

In waddles this jollux (blobby), complete with 14″ pizza take away and alcohol, lollups down, onto two chairs no less, on the front row of course and proceeds to stuff his face with pizza.

Just your typical American theatre evening. All that’s missing is a surprise appearance of John Wilkes Booth to add some sparkle and delight for the NRA.

You wouldn’t believe that we’d both had some serious training in not being judgemental.

Then we have the nightmare drive home in the dark. Have they never heard of cats eyes and what about some street lights.

Religious rant of the day
3 Things you probably didn’t know about Islam: