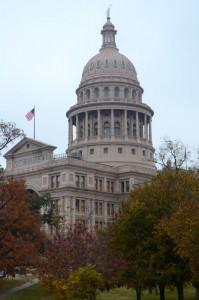 Texas State Capitol building. Being Texas it just happens to be 18 feet taller than the one in Washington.

Drive down to Austin. As it’s raining we down the free Texas State Capital tour. Very impressive and like everything it’s big. In fact it’s even 14 feet taller than the Capital building in Washington – well it would have to be.

Typical Visitors centre starts off with good signs for parking and then totally screwed up. Typical response when you try and provide positive feedback on it. “Yes, we know but nobody does anything about it. You know what it’s like. You can fill in a comments cards but no one listens, especially to us”. Strikes me a few brown envelopes are needed.

Lunch in Texas Capitol building after free tour. Why is it full of pubescent geeks in suits and ties? 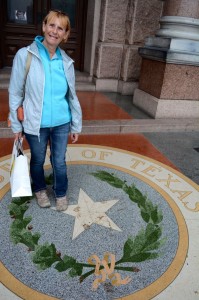 Done step on the Lone Star.

Having done the cultural / political thing this morning, now Wendy’s doing what all self respecting Americans do, she’s marauding the Mall. Fortunately I’ve found a small haven of sanity with a dirty chai and two extra shots. Relax a dirty Chai is not some unwashed Mexican hooker. At a Starbucks of course. This is now my favourite Starbucks tipple, so much better with Soy milk (how trendy and tree hugging is that) than non-fat. When that’s finished there’s an Apple Store to go play in.

So we’re in Dillards. In fact we’re the only ones in there. More “salesgirls” than ????? You’d think then swoop down on you like a vulture on a dead possum. But no much better to stay as far away as possible an sup their water. You almost have to beg them to assist.

What’s the real difference between a Yankee Zoo and a Texas Zoo?

On the cage, a Yankee Zoo will have the name of the animal and then the scientific name in Latin.

Whereas, a Texas Zoo will have the name of the animal and the recipe…..! 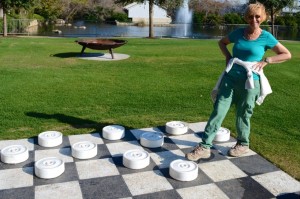 Weathers back to normal.

Then after lunch we have a stroll around Horseshoe bay and the awesome Japanese gardens. Very quiet here. Hardly anyone around. Very relaxing I’m starting to feel comatose.

Followed by drinks around the communal pool. 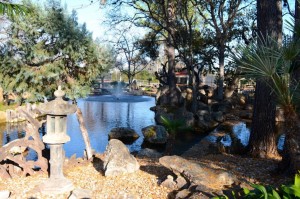 When two trains meet each other at a railroad crossing, each shall come to a full stop, and neither shall proceed until the other has gone.

It is illegal to take more than three sips of beer at a time while standing.

You can be legally married by publically introducing a person as your husband or wife 3 times.

It is illegal to drive without windshield wipers. You don’t need a windshield, but you must have the wipers. 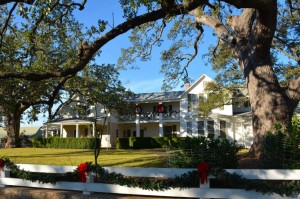 Lunchtime we drive down to the L B Johnson National Historic Park to see his ranch and the Texas White House. As with all NP places there’s an interesting film in a magnicent cinema, we’re the only ones in it. Then we have a drive around the ranch. Texas, it’s big. Followed by an interesting guided tour through the Texas White House. Of course being Texas they just had to have their own White House. All interesting. We new very little about LDJ but we’re amazed at how many pieces of legislation he passed. What a difference to today’s president and a moribund congress.

So what’s going to be my Presidential debut:

I think I’ll just make a minor change to the 2nd amendment. Just move one letter around so “….bear arms….”, now reads “…bare arms…”. One small step towards sanity and one giant leap for common sense. Tinkering I know but it’s a dam site more change than the current administration seems to be able to achieve. 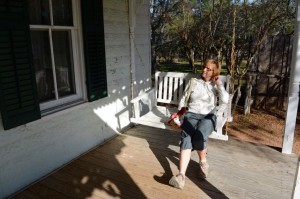 Porch time on the farm at LBJ ranch.

So why the lone star:

The Texas Flag Code assigns the following symbolism to the colors of the Texas flag: blue stands for loyalty, white for purity, and red for bravery.[6] The code also states that single (lone) star “represents ALL of Texas and stands for our unity as one for God, State, and Country.” The “lone star” is, in fact, an older symbol predating the flag which was used to symbolize Texans’ solidarity in declaring independence from Mexico.[14] It is still seen today as a symbol of Texas’ independent spirit, and gave rise to the state’s official nickname “The Lone Star State”. 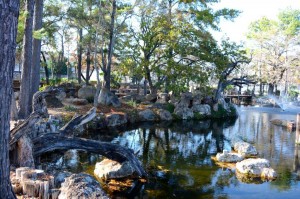 It is illegal for one to shoot a buffalo from the second story of a hotel.

It is illegal to milk another person’s cow.

A recently passed anticrime law requires criminals to give their victims 24 hours notice, either orally or in writing, and to explain the nature of the crime to be committed.

It is unlawful for a person to consume an alcoholic beverage while operating a motor vehicle upon a public roadway, if the person is observed doing so by a peace officer.

The entire Encyclopedia Britannica is banned in Texas because it contains a formula for making beer at home. 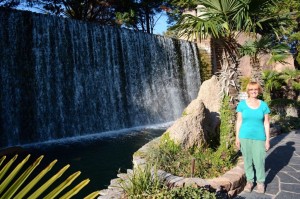 Waterfall in the gardens here at Horseshoe Bay.

Excitement of the day is a trip to HEB in the afternoon.

Catch Homeland at night, what a humdinger

Abilene
It is illegal to idle or loiter anyplace within the corporate limits of the city for the purpose of flirting or mashing.

Austin
Wire cutters can not be carried in your pocket.

Borger
It is against the law to throw confetti, rubber balls, feather dusters, whips or quirts (riding crop), and explosive firecrackers of any kind.

Clarendon
It is illegal to dust any public building with a feather duster.