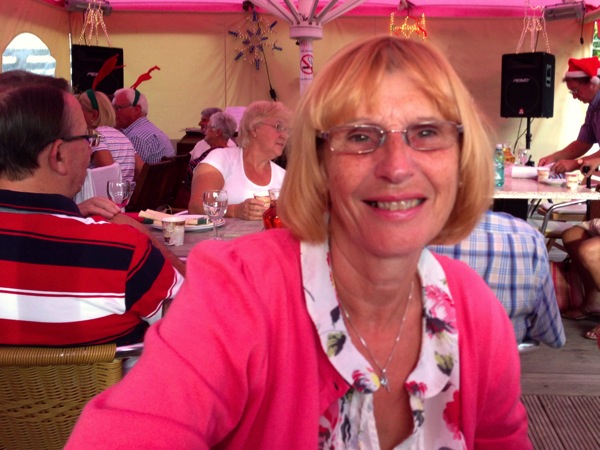 Meanwhile Wendy’s still “pussyfooting” around, but foot does seem to be getting better slowly. For some excitement cleaned and waxed the right hand side of the caravan. Saving the left hand side to savour on another day.

Risked another bottle of Chinon wine. Confirms my long held belief on French wines. If it’s in a Burgundy bottle then forget it – with the exception of Pinot Noire. Stick to Bordeaux’s they’re so much smoother and don’t wake you up in the middle of the night.

Friday – hot and sunny. Weather seems to have turned for the better.

Drive up to the market at Thouars. Wander around and admire all those lovely foods but as usual buy nothing. Coffee in a street cafe, people watching, in the sun.

SLK with top down; queen blasting out; wind blowing through my hair – just can’t do a thing with it. This is the life.

Leisurely afternoon in the sun. After 3 years our 6Kg of Butane is empty, time to invest in a refill.

Stap me vitals. More excitement as I clean the left hand side of caravan. Have to get some tablets to clam me down at this rate.

Actually really depressing to think we’re going to a Christmas party in September. The one saving grace is there was no turkey or tinsel. But this is the start of the slippery slope to one foot in the grave. Next stop Wallace Arnold coach tours. Arghhh! Whats a 16 year old mind doing in a 63 year old body, sat at a Christmas party surrounded by coffin dodgers singing jingle bells. Get me out of here. As a token gesture to Christmas spirit I manage a grimace on a photo.

Overall it was a nice gesture. Jacobs join with mulled wine and Christmas pud provided by Jo and Allister. Double helping of Christmas pud. Can we call it that or is it non PC (I hope), perhaps it should be Winter pud.

As for the rat in a handbag – see picture – I’ve reported them to the RSPCA for mental cruelty to animals. How can people be so cruel. The poor thing will need years in therapy to get over it. 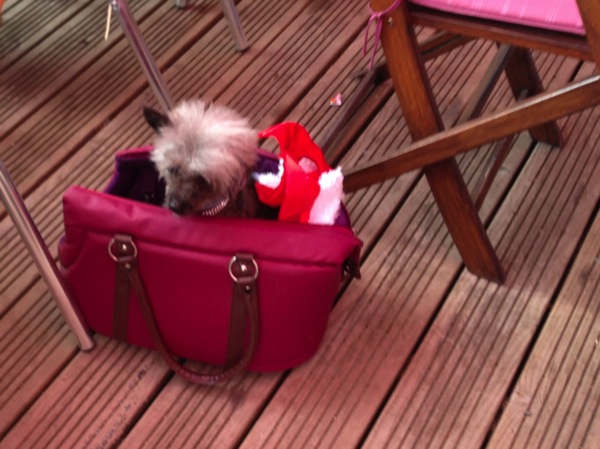 Wax the caravan. Is there no end to the excitement.

Never let it be said that this retirement life is easy. Difficult and momentous decision needed as we leave France. Do I fill the only passenger seat in the car with another 36 bottles of wine or Wendy? Hard choice. But then thoughts of starvation and malnutrition enter into my deliberations. So Wendy it is.

More excitement, clean the car. Car looks stunning when clean, but whose idea was white?

Nearly finished my Climate Change course from Chicago University. Also reading a frightening book on Islam ” The Politically Incorrect Guide to Islam”. Really makes you realise that Islam just seeks World domination. Dress it up however you like and the Dhimmi politicians can pander to them all they want, but there’s only one end game. Wake up, smell the coffee.

Why are designers so incompetent? Do they never bother testing their creations? Have they no common sense? Just a little thought could make life so much easier. Spare tyre hardly fits, a nightmare to get in or out. Yet just 1/2″ shaved off a fancy piece of plastic would solve it. Why is tyre valve underneath? I know so that you have to take the tyre out to check the pressure rather than doing it in situ! Caravans are the absolute pits for common senseless design. I could go on all day. 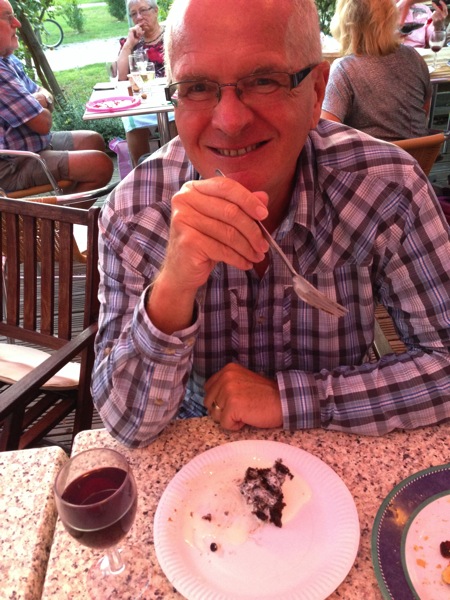 Hate packing up. Wendy’s in full swing spring cleaning mode. I really do think she enjoys it. Best keep out the way. All this cleaning etc makes you wonder whether it’s really worth it.

Despatched to supermarket to buy my wine. Can they be bothered to get me some boxes. What do you think? Show floozie on checkout 1 bottle and explain both in French and with my fingers how many I have. She can see them. Oh no she wants me to take them all out and put them on the conveyor.
“No if you don’t trust me, come around here and check them.” Lengthy phone call to higher authority, ensues.
I’ll be dammed if I’m being treat like a potential thief. I keep thinking I’m a customer customer. Oh well they can put their wine back.
I wouldn’t mind, but apparently they even insist on examining any bags you have. Bear in mind there’s no plastic bags in France so you have to take quite a few bags with you.

Up at the crack of sparrows and after the usual faffing around we finally get on the road.

Breakfast was going to be an egg Macmuffin but being France MacD’s can’t be bothered opening until 09:30 – now there’s a surprise.

As we leave France we get a confirmation of how right my Francophobian rants are. Women cover your eyes. The picture says most of it. Taken in the petrol forecourt / car park of a very busy hypermarket, young kids and women all around. What a lazy pissartist. There’s some excellent clean and free toilets just 25 yards away – perhaps he was afraid they wouldn’t have seats. To add insult to injury his car was parked at the petrol pump whilst he drained the one eyed bed python, doesn’t give a dam about all those queuing. I’m not saying anything about the ethnicity / religion, that was pure chance.

Now only yesterday I wrote to the Times defending our Border Agency. Today I encounter it. 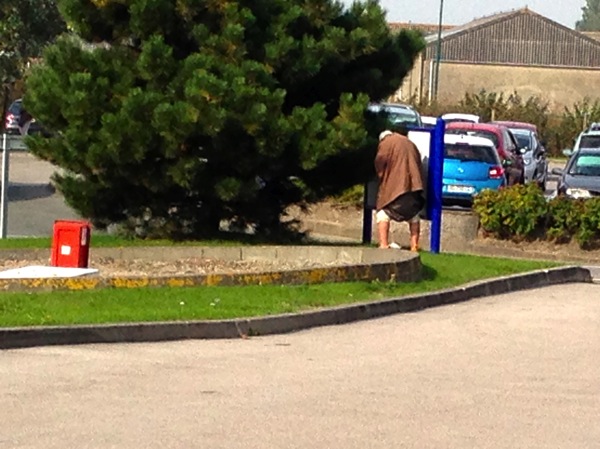 Drive up to the french border control at Calais, flash our passports. Don’t want to see them. Obviously glad to see the back of us whinging RoastBeefs. Then it’s the UK Border. Oh yes they want to see our passports; spend 3 minutes reading them – you’ll understand why they’re slow readers in a moment; ask to see my face, without my sunglasses – violation of my religious freedom there. But then we get the award winning question.

Now bear in mind my little SLK is clearly a 2 seater. No room behind the seats even for an ounce of heroin or a bottle of wine. So what does Einstein say to Wendy (the passenger)? “How many are there in the car?”. I felt like shouting out us two plus a family of 4 from Sangat down the road – fortunately I managed to exercise restraint. Obviously common sense and intelligence is not one of the key criteria for this job – worrying!

Check in to the Hilton at Folkestone. Lovely hotel and free breakfast. They also get the accolade of the fastest hotel wifi I’ve ever encountered. But, yes there’s always a but. They also get the VICTOR MELDREW 2013 AWARD FOR THE MOST DIABOLICAL WIFI LOGON. Yes’ I know that it’s only September but rest assured no one could beat this for stupidity.

Bear in mind that this place is in the middle of nowhere, so who’s going to pinch their bandwidth anyway. To logon you need to enter the longest password ever – gauzeballjellysandy – you’re welcome to it. You then have to enter an email address (twice to be on the safe side); full name; telephone number; user name which has to be unique, so it takes you ages to get one you’re happy with; the ubiquitous marketing box, untick a “send me crap for evermore”. Fortunately I could flush the toilet, turn on the lights and TV without having to enter a 19 character password. When will these numpties get a life.

Of course I couldn’t resist asking why it was so stupid. Oh it’s the law. What law? He didn’t really know. “The law is the law.” Probably the Digital Economy Act 2010, no doubt another piece of useless legislations, similar to the Data Protection Act, that our clowns in the big house fiddled and debated with whilst the economy went down the tubes. Well hopefully the law can email me “Mr Idont believe” at it181818@btinternet.com, or phone me on 12345678. If they were serious why didn’t they use the room number, at least they could then trace me.

Up for an early breakfast then do battle with the UK traffic. Again no major hold ups but so stressful. No chance of putting cruise control on and letting the butterflies float around my  head as I hog the middle lane.

What have I learnt during this little break:

1 Climate change is a real threat and caused by us homo sapiens – thanks to Chicago University course.

2 My French is as bad as ever.

3 Never to forget that “France is a lovely country spoilt by the French” – that’s what 5 weeks in France does for you.

4 Islam has only one end game, World Domination. The grand Caliph. They have no intention of integrating or co-existing with other religions / atheists. They offer only three choices; conversion to Islam; dhimmitude and pay jizya, there tax on infidels; or death. The politicians, loony left, liberal do gooders, PC brigade who are foaming at the mouth to have us all converted really need to understand that they are at war with us.

Blog signing off now until 1st of November – yes home for that long. How will I cope and manage my stored up rants.