That’s it we’ve reached escape velocity and we’re off. 6 weeks in France. Hopefully a tad warmer and sunnier. Cars packed and can’t believe there’s even some room left in the micro boot. Well done Wendy. Who knows might even manage to bring a few bottles of wine coming back.

All I need to do now is gird me loins ready for the French. I’m ready to dust me blog off. I’ve 6 weeks of pent up rants ready for me blog. The French never fail to provide ripe pickings to rant about and of course the luny fundamentalists from the religion of peace are always a fertile ground. It will be like my hero Victor Meldrew on steroids.

But first I’m forgetting the joys of British motorways that awaits me. Fortunately no major traffic jams just hard driving with the volume of traffic.

Tunnel is as efficient as ever. Then it’s an hours drive to our overnight hotel in Abbeville. Very pleasant, good evening meal and breakfast.

5 hour drive down quiet roads, so much more relaxing than the UK even if you do have French exhaust bandits up your backend.

Caravans all pitched up and ready for us.

Supermarket for essential supplies. Wine and some bier. You know you’re in France when you see the choice of wine and lots of it below E5 and crap bier – I’ll spell it that way so as not to be confused with quality beer like the Reinheitsgebot – full of E numbers. They sure know a thing or 2 about wine but their bier’s best used as drain cleaner.

Bread and cheese for dinner so we’re well established. Satellite set up for Freesat (heaven forbid Wendy misses East Enders); TV set up; DVD set up; Wifi set up – much good may it do us as they use carrier pigeon (French ones at that); VPN set up; deck chairs out; sun shade up; shopping done; Kindle locked and loaded.

Stap me vitals, standards must be slipping. A French caravan here in Little Britain, whatever next – we’ll all be on Halal frogs legs. Mind at least they have quarantined the caravan and family in a remote area.

Blog ready to roll. Get all those rants off me chest.

Nip down to Parthenay to the non-existent market – don’t they all have a Friday market – and visit Lidl. Quality beer, cheap E0.5 a bottle and Wendy says food is cheap.

Barbecue on the campsite this evening complete with singer – Joan Baez me thinks! We pass on the barbecue as Wendy doesn’t have her asbestos suit with her and like her eyebrows the way they are.

From now on my blogs going to be carefully colour coded.

Black – our daily log of where we were, what we got up to. Vital when you have problems even remembering what you had for breakfast and “did I turn the gas off”.

Red – religion. My totally non PC views on ALL religions but especially the religion of peace, failed multiculturalism and the do gooder, progressive dhimis in the UK.

Blue – jokes and sarcasm (what me). Hopefully non of it PC and most of it aimed at the French.

Purple – Rants on anything else I have a hissy fit about. And there’s plenty to go at with our clowns in government. If I ever dry up then a quick shifty of the Daily Mail is enough to wet me appetite. 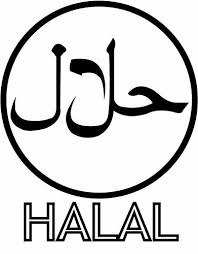 Halal Hell – yes that meat and Halal products have crept into our way of life, served in schools, hospitals, restaurants and sold in supermarkets. Yet another example of the Dhimi multiculturalism in this country.

So why do we (that’s the royal we of Wendy and I) object to Halal:

1 Yet another dhimmi step down the path to Sharia law in our country.

2 There’s substantial arguments that it’s a cruel way of slaughtering animals and yet it’s permitted in the UK. The European Union directive, “European Convention for the Protection of Animals for Slaughter”, generally requires stunning before slaughter, but allows member states to allow exemptions for religious slaughter – now there’s a surprise.

3 Only Muslims can be involved in Halal preparation. Employment discrimination.

4 Muslim do not have to eat Halal if it is not available in a country.

5 It is not clearly labelled.

6 The Halal certification authority charges extra, a hidden tax, and there is evidence that some of these authorities support terrorism.

How to avoid it? Look for these labels and leave them on the shelves. Avoid Morrissons who have a bad track record in this area.

For a great video on the issues then you can see my hero Pat Condells rant about it here  and there are several websites on this issue, although some do lack objectivity.

Why don’t they have fireworks at Euro Disney? Because every time they shoot them off, the French try to surrender.

Expert boob gropers wanted to work in airport security. Can you grope a boob? Can you tell the difference between real boobs and implants? If you can answer yes to both of these, then there’s “stimulating” opportunities open to all.
Yes, it seems that religion of peace has found a new way for their fundamentalists to terrorise with explosive breast implants. Given that religions attitude to women there will no doubt be plenty forced into the role.
Long queues at airports as they try and cope with the new threat. Of course profiling is so non PC that both men and women will be inspected – bugger common sense.

I’m fascinated to know what these female terrorists get when they get to paradise. If men get 72 virgins? What will the women get? Will they get 72 virgin Chippendale male studs?

Tough luck, it turns out that women will be provided with only one man, and are commanded “will be satisfied with him” – so there.

School nurses, doctors and public health officials have been told to tone down the way they tell parents that their children are overweight.
NHS guidance says letters should not make people feel that their parenting skills are being criticised but instead be “non-judgmental and positively phrased”. The word “obese” has been removed from template letters to be sent to parents, as have references to cancer.

What’s wrong with the word fat or blobby or butter-ball or roly-poly. Do these PC morons (another non PC word) not realise that they are depleting the English language of yet another word – soon we’ll have no PC words left at this rate.